Following in the footsteps of the great poet
Travel

To observe the coming Sunthon Phu Day on June 26, Life explores Klaeng district in Rayong that is related to the life of one of Thailand's best known artists who was born 235 years ago

Around May to July every year, I set my calendar to visit the East as it is fruit season. Last week, I went to Klaeng, a coastal town in Rayong province. I planned to get fresh ripe fruit from an orchard, take in the fresh sea breeze and visit the memorial park of Sunthon Phu, one of the great poets of the early Rattanakosin era. 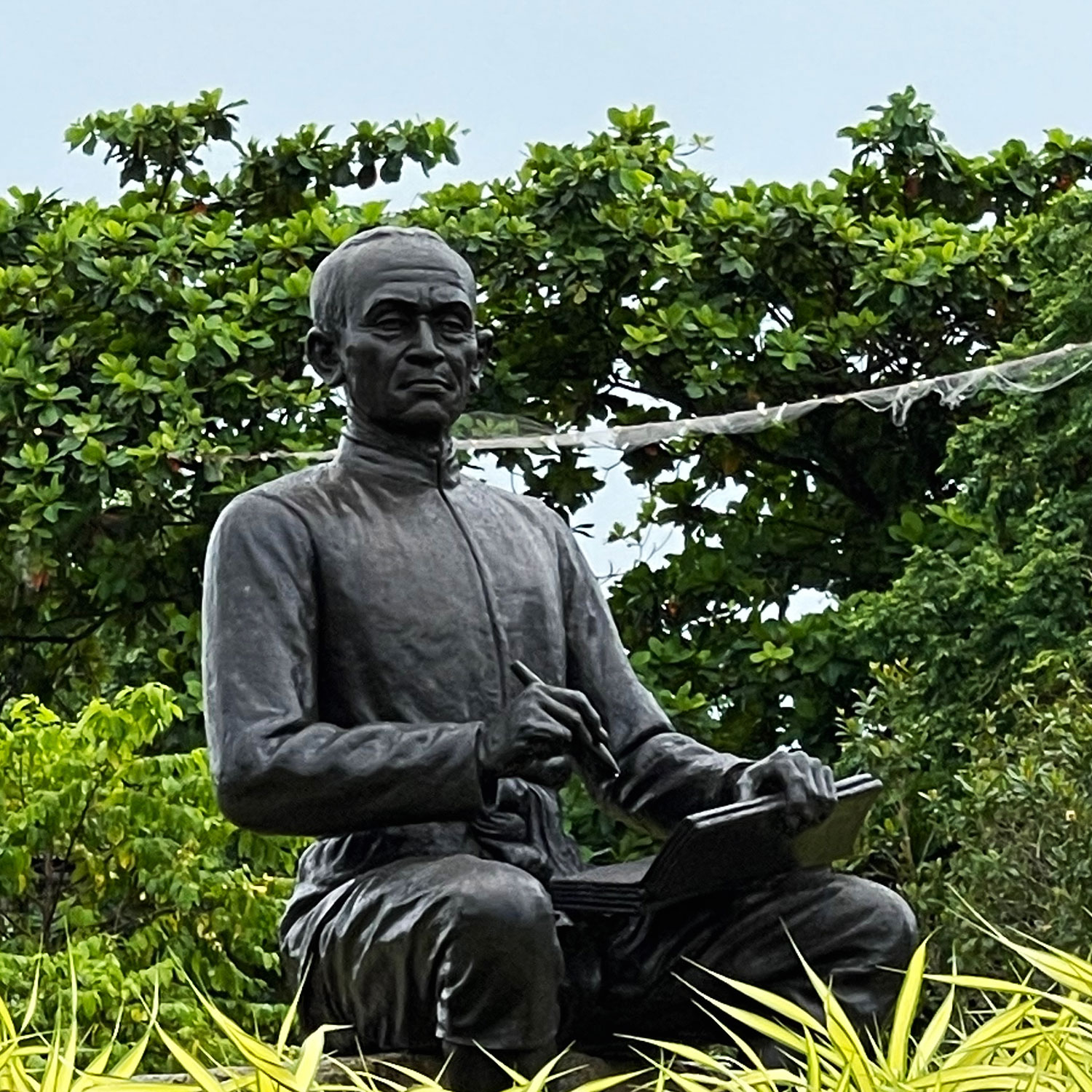 The sculpture of Sunthon Phu is located in the centre of the Sunthon Phu Memorial park in Klaeng district. 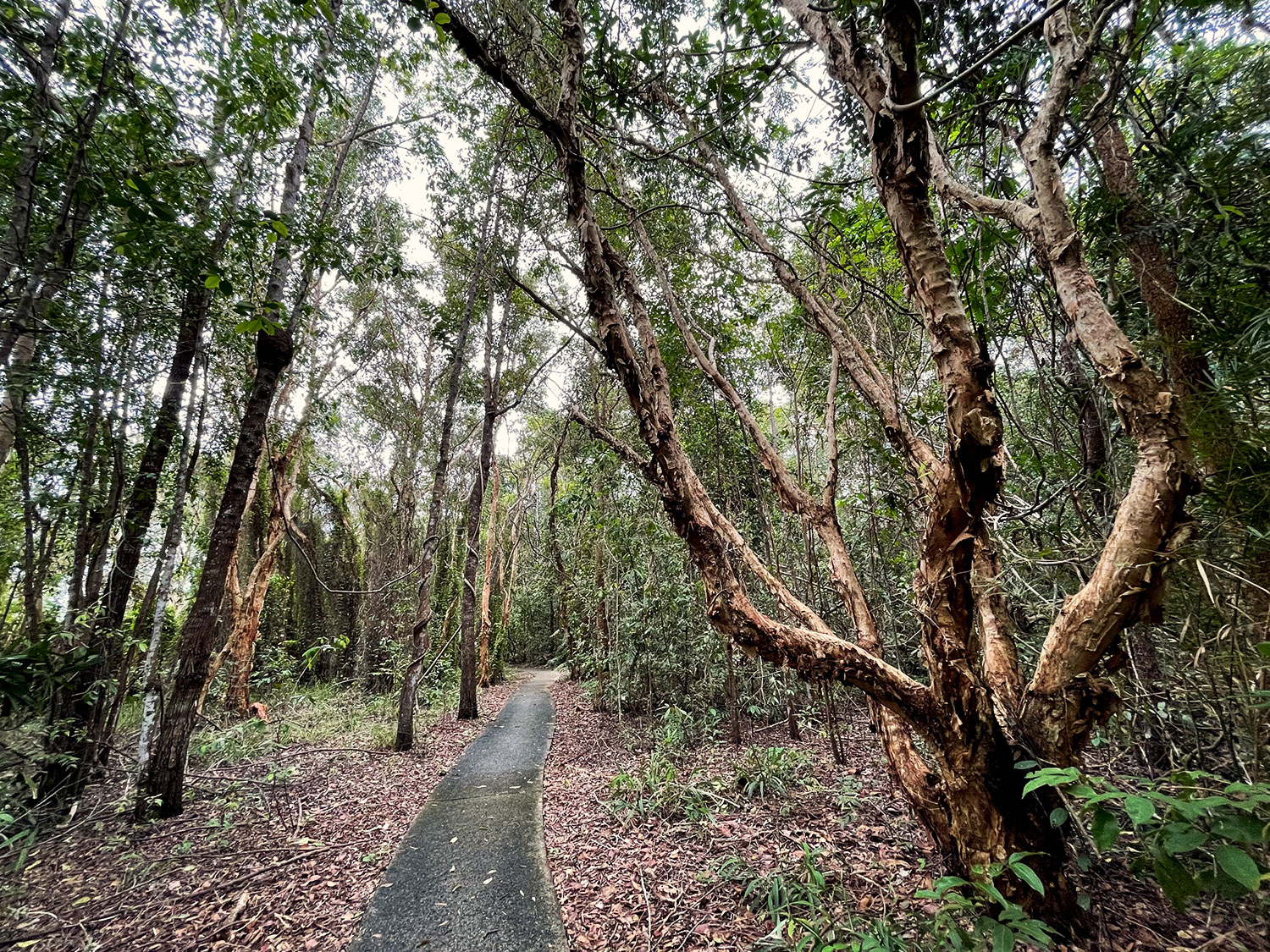 The walking/biking trail inside the botanical garden has a lot of shade from tall trees. Seen in the picture are samet daeng (eugenia tree), right, and ton chamuang (cowa trees).

It took about three hours to drive to Rayong. My one-day trip started at my favourite place, Rayong Botanical Garden, which can be accessed through Muban Nai Chak Road, off Road 3145 in tambon Chak Phong.

Although I visited the site before, I still needed Google Maps to guide me as the signboards to the wetlands were too small to be noticed. When I arrived, a staff member at the information centre greeted me with a broad smile.

"Do you want to rent a bicycle or a kayak?" he asked.

I shook my head and told him that I simply wanted to wander inside the park on foot. The complete loop is about 3.2km, consisting of five islets that are connected with bridges.

I heard the noise of motorcycles approaching as I left the open-air tent of the information centre. The staff shouted out to the group of college students that they could not drive their motorcycles inside. They parked the motorcycles while I took the dirt road flanked by bodies of water inside the wetlands. Along the walkway water lilies, in full bloom, showed their colours of pink and purple among their round green leaves. 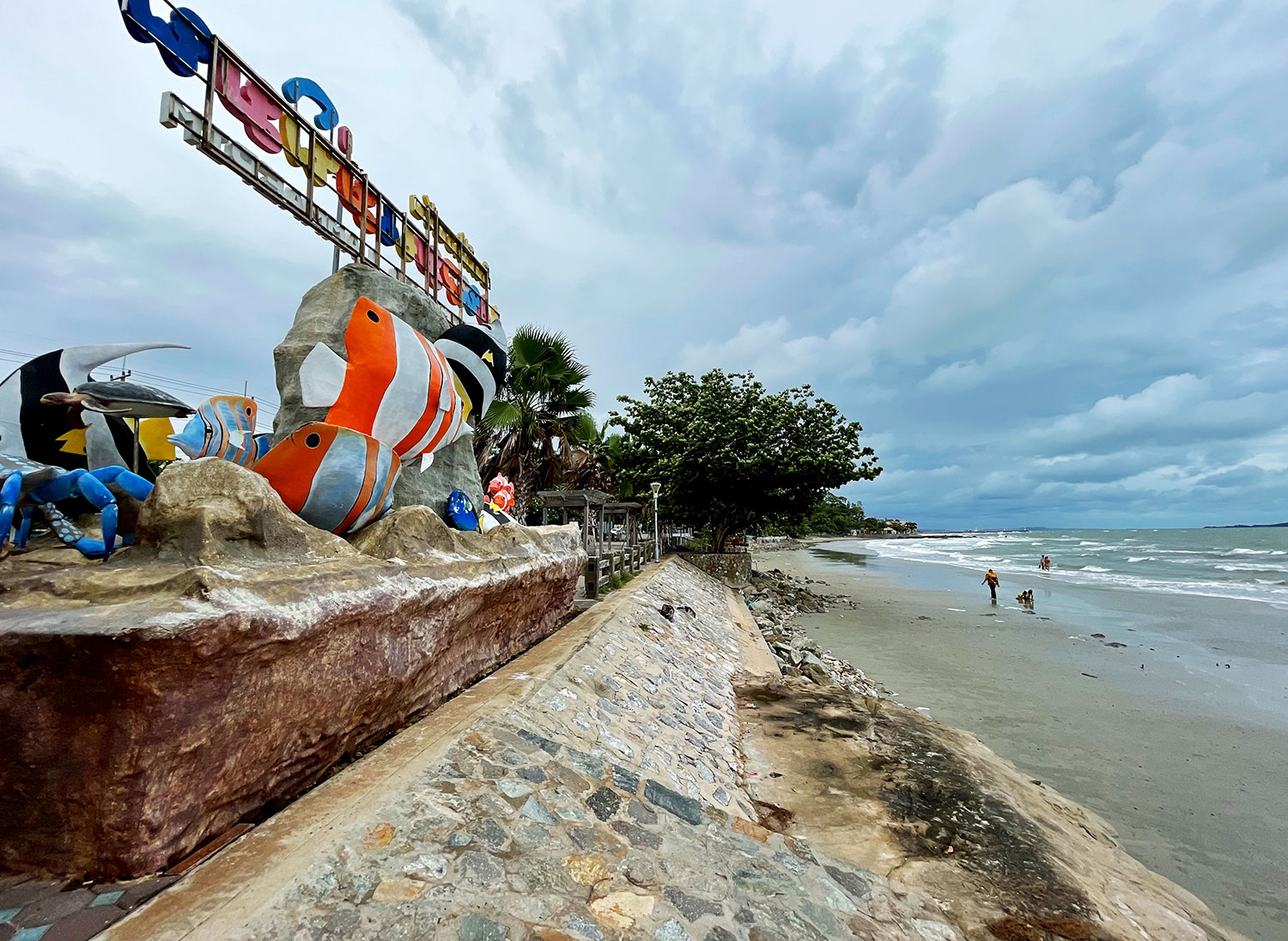 Laem Mae Phim beach is not yet crowded with visitors. The beach has sculptures of Sin Samut and his mighty lion friend, both characters from Phra Aphaimani, as well as sculptures of a school of fish. 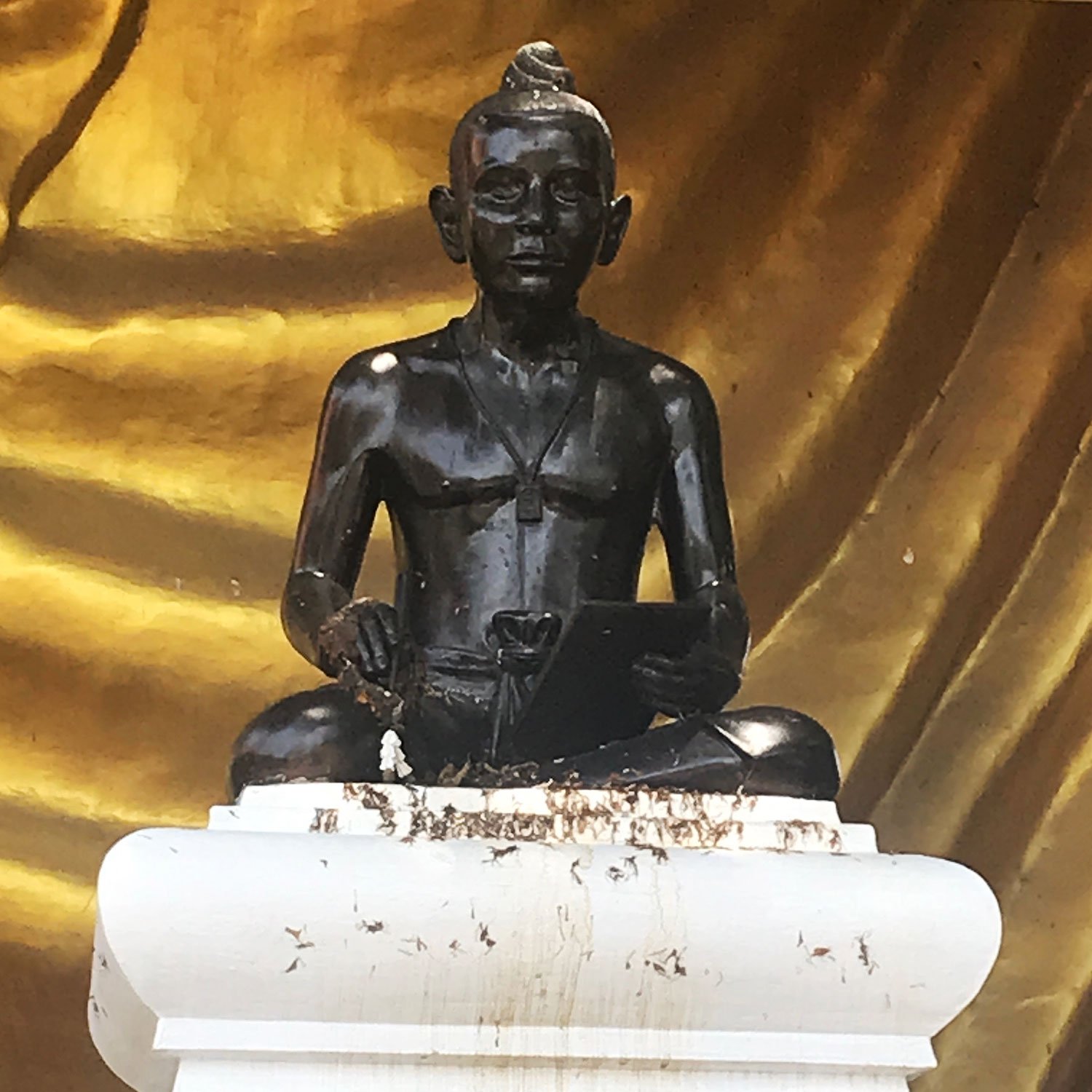 The sculpture of Sunthon Phu when he was a student in Wat Chi Pakhao, which was renamed Wat Sri Sudaram during the reign of King Rama IV when the temple was renovated. 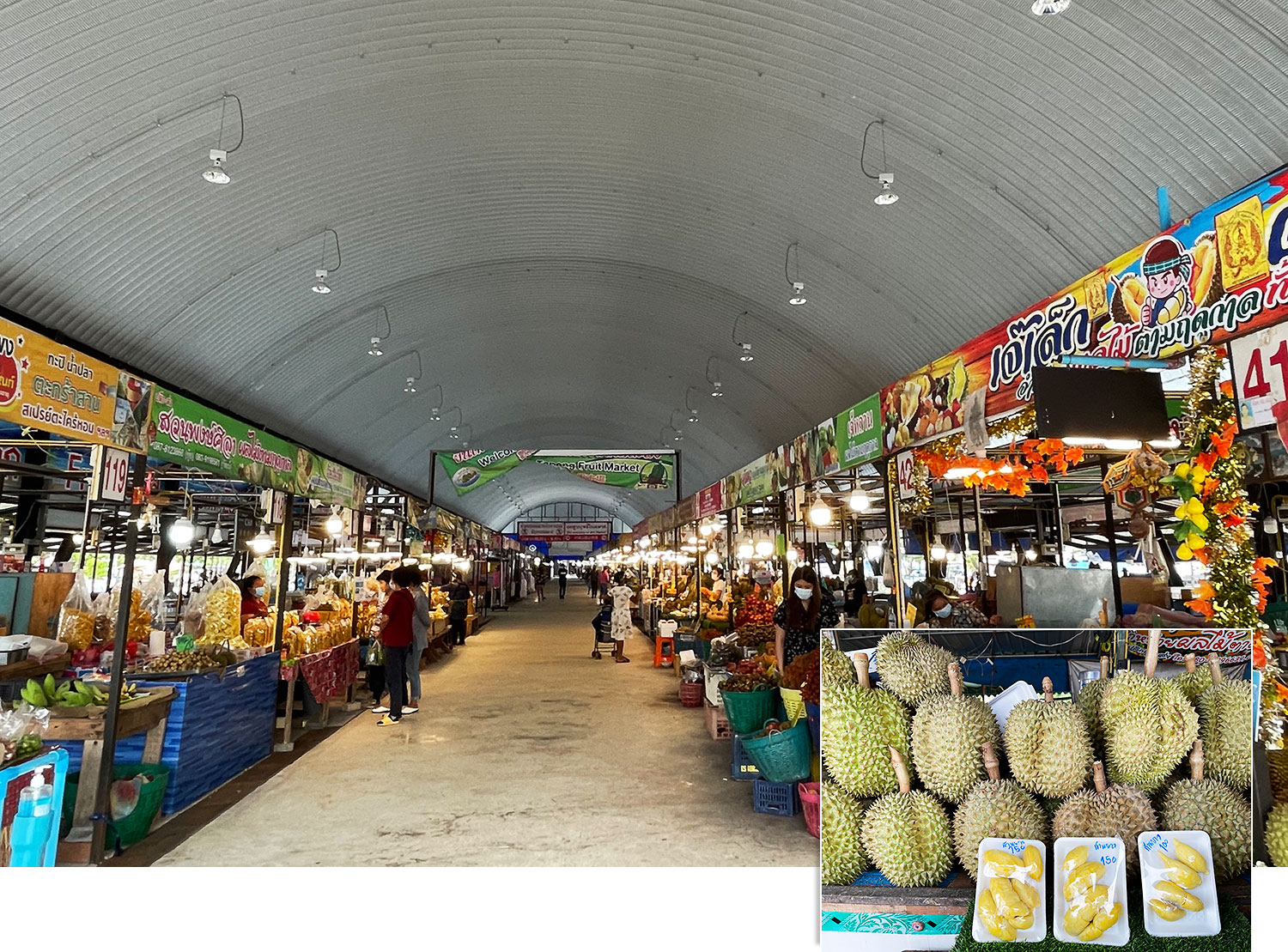 Taphong Fruit Market is the central fruit market in Muang district in Rayong. It consists of two halls and an open area where vendors/farmers can park their pick-up trucks to sell fruit.

After a short walk from the entrance, I came to a cross junction where I chose to turn right and headed to a red wooden bridge built across the lake. Before me was a group of samet khao that reflected beautifully on the water. Soon I heard giggling nearby that turned out to be students in a kayak. The double-seater boat zigzagged across the lake as the friends struggled to paddle in sync.

I walked back to the junction and continued to an area of dense paperbark trees, known as pa samet boran as locals believe the trees are more than a century old. They grow in swampy soil, which emits a slightly musty smell while walking inside the zone and is worth a visit. For me, it is the most beautiful spot in the garden. I was about to move on to another islet but I stopped as rain began to fall and my stomach started to growl.

I headed to Laem Mae Phim for lunch -- about a 15-minute drive from the botanical garden. The wind was strong and sea rough after the rain. Red flags were erected warning beachgoers not to swim but some people still dared to take a dip while children played in the sand on the shore.

Laem Mae Phim beach is quite long. Although it is not a white powdery beach, it has space to relax and take in the sea breeze while still being away from other beachgoers.

Beach chairs with umbrellas are available for rent while bathrooms, coffee shops and accommodation are on the other side of Road 3145 running parallel to the beach. At the end of Laem Mae Phim, you will find choices of seafood restaurants located next to the beach. Seafood is fresh while prices are affordable.

Only a five-minute drive from Laem Mae Phim, I arrived at the Memorial Park of Sunthon Phu located on Road 3161. The park may lead someone to think that Klaeng was the hometown of Sunthon Phu or the birthplace of his father. But based on his travel poem Nirat Muang Klaeng, he writes that he went to Klaeng as he was asked by his superior so he took the chance to visit his father who was an abbot of Wat Pa Kram in Klaeng. 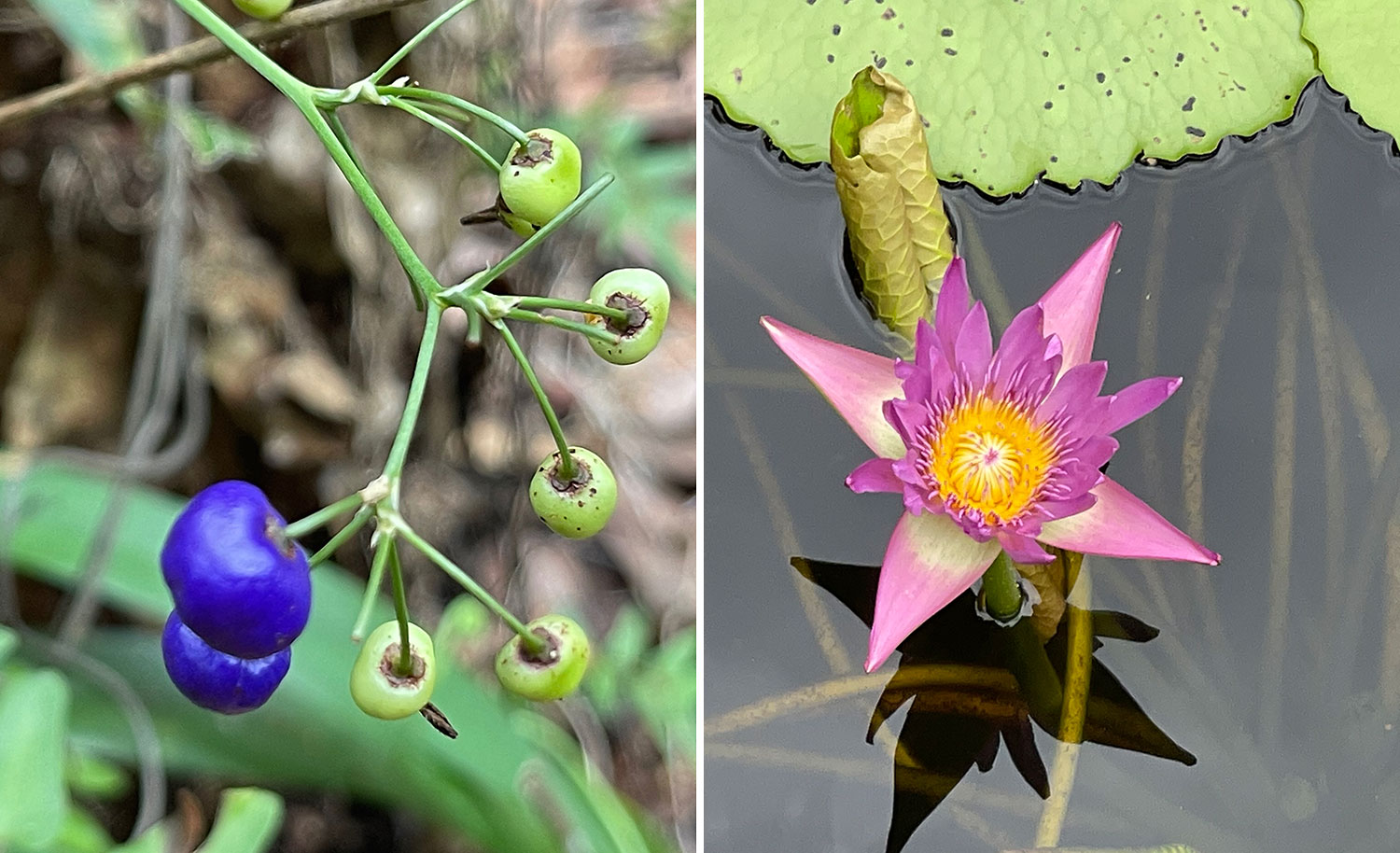 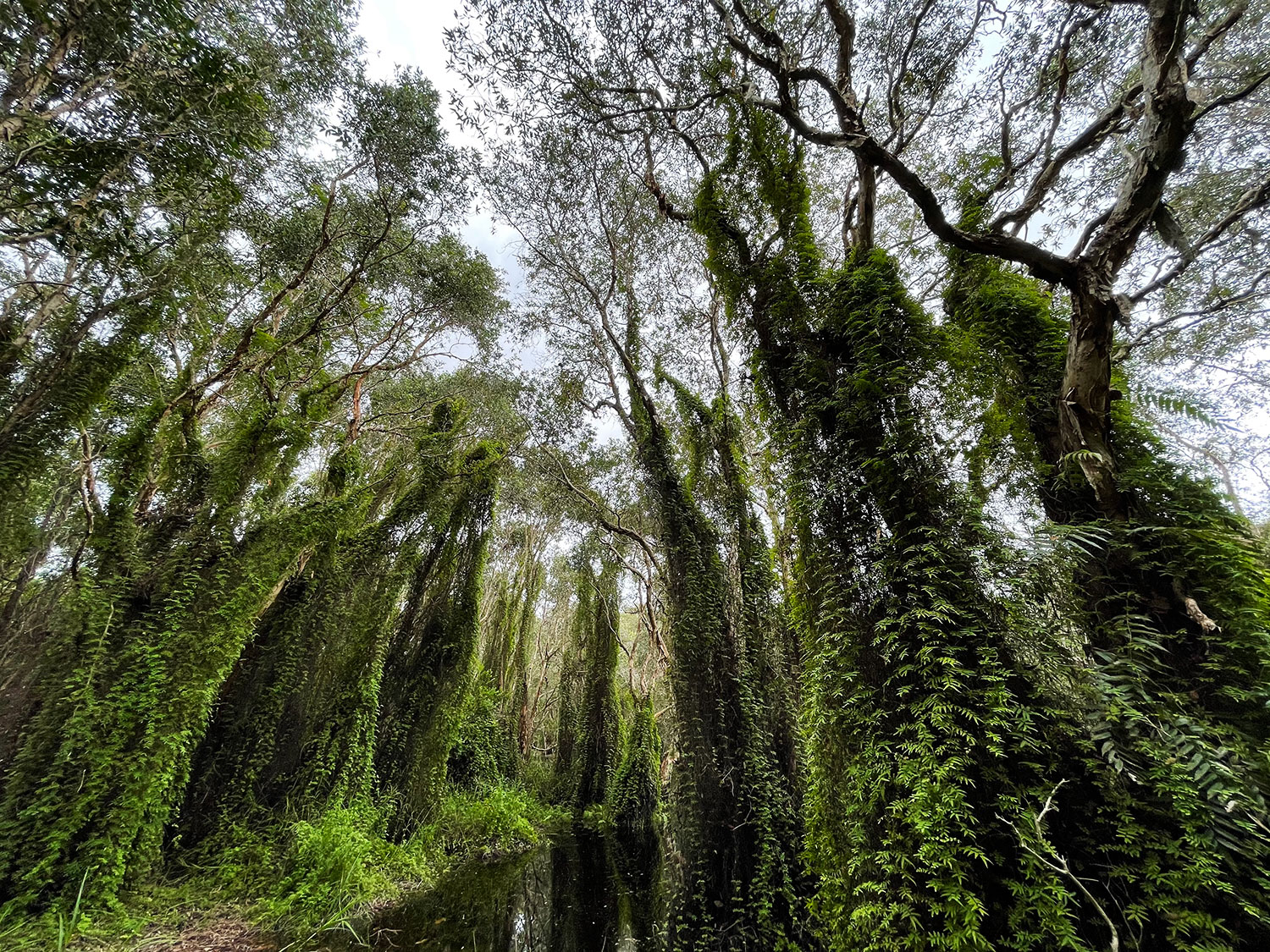 The samet khao, or paperbark trees, are one of 400 species preserved by Rayong Botanical Garden. Wandering inside the park, you will hear birds chirping and see various plants up close.

Sunthon Phu wrote numerous pieces of poetry, dozens of which have been taught in schools. Among his most famous works are Phra Aphaimani, which is a fantasy romance story, three books of proverbs and a series of nirat or travelogue poetry. Many of his poems have been presented in various art forms including stage performances, movies, documentaries, animations and soap operas. In 1986, Unesco honoured him as a great world poet.

Nirat Muang Klaeng, his first travel poem, inspired a local politician in Rayong to have a monument of Sunthon Phu built in the Ban Kram community. The project was initiated by the late Sawet Piampongsan, former finance minister and MP of Rayong from 1946-1976. He personally admired Sunthon Phu and also loved writing his own poems. He wanted to have the sculpture of the great poet for people to pay their respects.

In 1955, Field Marshal Plaek Phibunsongkhram who was prime minister at that time laid the foundation stone at an 8.5 rai site in Klaeng. The site is not far from Wat Pa Kram. In 1968, Rayong governor Wittaya Kasornsaowapak asked for donations and received almost a million baht fund to continue the project. The governor hired a team from the Fine Arts Department to create the bronze sculpture in 1969. A year later, the statue of Sunthon Phu was erected on a little hill at the centre of the site along with other statues based on the well-known supernatural characters from Phra Aphaimani such as the eponymous lead, his two wives (Phi Suea Samut and a mermaid) and their sons Sin Samut and Sud Sakhon.

The memorial park of Sunthon Phu was officially opened in 1970. Rayong Province hosts an annual ceremony in the park that to commemorate Sunthon Phu on his June 26 birth date, known as Sunthon Phu Day. The park also has a traditional Thai house that recreates the living quarters of his father when he was an abbot at Wat Pa Kram.

The visit to the memorial park in Klaeng reminded me of two memorial sites of the famed poet in Bangkok. One is Wat Sri Sudaram, an old temple built during the Ayutthaya period in Bang Khun Non district. The temple was his first school so locals made a sculpture to represent the boy named Phu.

The sitting statue of the boy is posed like he was listening to a teacher and ready to take notes. He has a slate pencil in his right hand and a slate board (or kradan chanuan) in his left hand. The boy with a top knot bun wore chongkraben, a traditional Thai pantaloon-like trouser. The sculpture is located next to the large 13m tall statue of a late revered monk named Somdet Phra Buddhajarn (To Prommarangsi). Temple visitors often offer jasmine garlands to the statue as a gesture of respect.

Sculptures of the main characters of Phra Aphaimani are exhibited in Sunthon Phu Memorial Park. 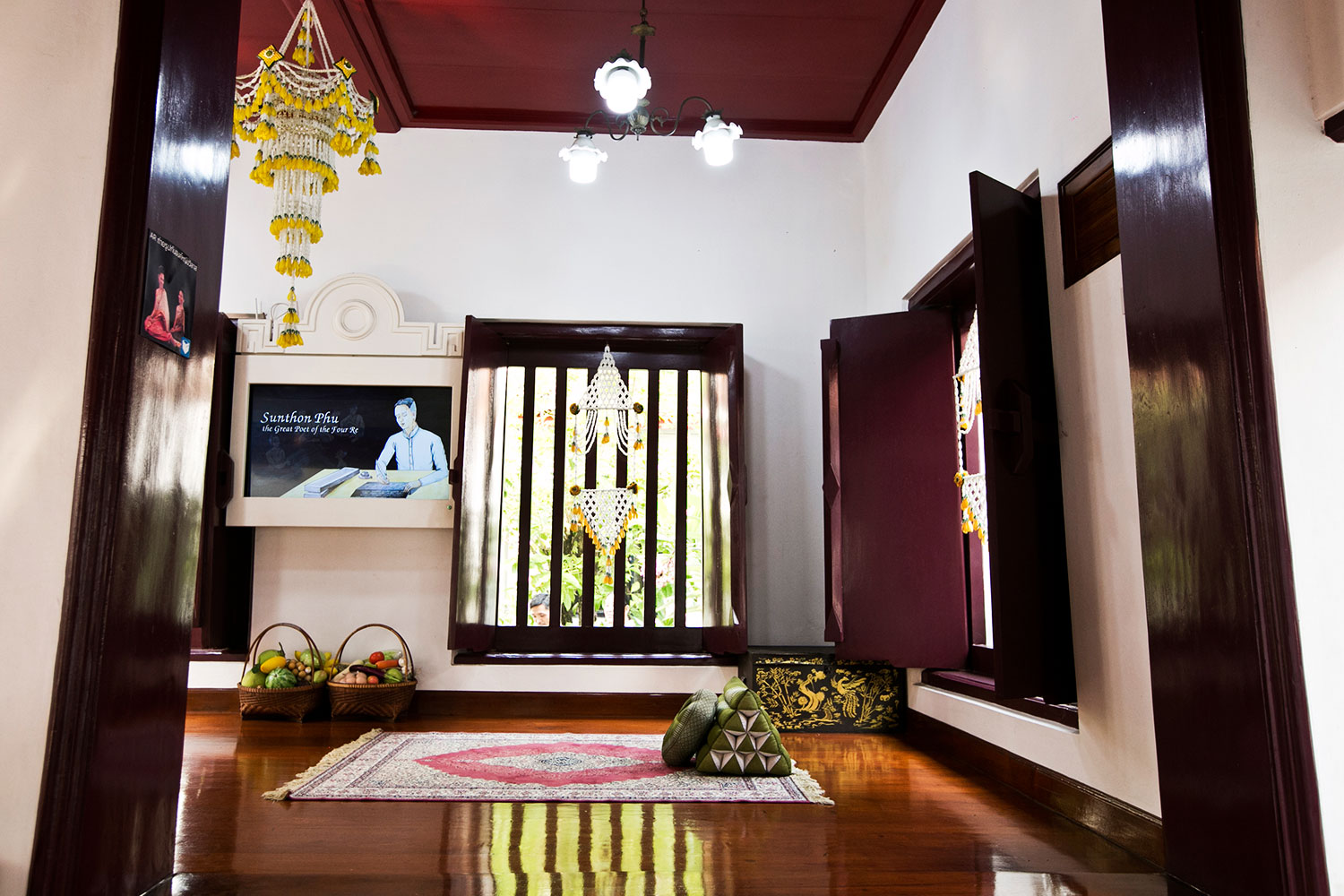 The Museum of Sunthon Phu is located in Wat Thep Thidaram. The exhibit uses animation to explain the biography of the poet and augmented reality to allow visitors to be photographed with Sunthon Phu.

Fresh seafood is one thing that shouldn’t be missed when visiting Klaeng district. Visitors can find seafood restaurants along the coastal area, including Laem Mae Phim beach.

The other site with a memorial to Sunthon Phu is Wat Thep Thidaram in Phra Nakhon district, where the poet lived for three years before leaving the monkhood at 56 years old. The Fine Arts Department converted one of the temple's living quarters into a Sunthon Phu museum. At the temple Sunthon Phu also served as a Thai language teacher and wrote Phrachai Suriya, a poem to teach children to read Thai. (The book is also translated into English).

Back at Rayong, I stopped by Wat Pa Kram. The temple has a statue of the poet and characters from Phra Aphaimani in its compound. Unfortunately, its ordination hall was closed to the public. This is where Sunthon Phu visited his father, the temple's abbot, after being separated from him since he was young.

As evening approached, I made my last stop at an organic orchard on the way home. Some may like durian but for me, I like sweet and sour fruits like mangosteen and longkong. I stopped at Suan Phuyai Somkhon in Muang district just to buy fruit. In Klaeng, I once visited Suan Khun Pichai. He grows his fruit trees without the use of chemical fertilisers or hazardous pesticides. He offers various types of durian including phuang manee, mon thong, kan yao, krajib and kob chai nam. His salak is also highly recommended. The fruit is truly tasty and available all year round.

It is always good to be out to the beach and to see the forest. For me, the one-day trip to Klaeng was quite refreshing. It also helped recharge my batteries. 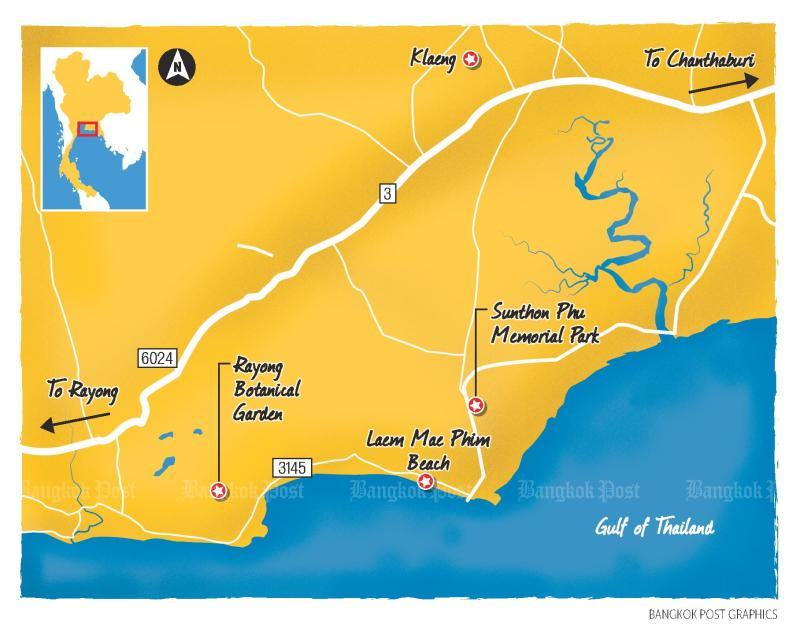