More than meets the eye
Travel

It was not my intention to end my travel series in the Central Region with another site of a gigantic Buddha sculpture. For my previous story, I visited Ang Thong's Wiset Chaichan district and went to Wat Muang to pay respect to the 95m-tall Luang Pho Yai, the largest seated Buddha sculpture in the country.

Last week, I visited Suphan Buri's U Thong district, about a two-hour drive from Bangkok. I couldn't help but stop by Wat Khao Tham Thiam to worship Luang Pho U Thong, a seated Buddha statue carved on the cliff face of Khao Tham Thiam hill. The sculpture is 84m tall.

The sculpture was initiated in 2014 by Phratham Phutthi Mongkol (Sa-ing Sirinantho). He is a highly respected abbot of Wat Pa Lelai Worawihan in Muang district, about 32km from the Khao Tham Thiam cliff. The abbot wanted to transform a 100 rai quarry, which became full of trash after the site was abandoned, into a pilgrimage site known as a Phutthamonthon site in Suphan Buri. The aim was to highlight U Thong as the first place the influence of Buddhism reached the Kingdom more than 2,500 years ago. 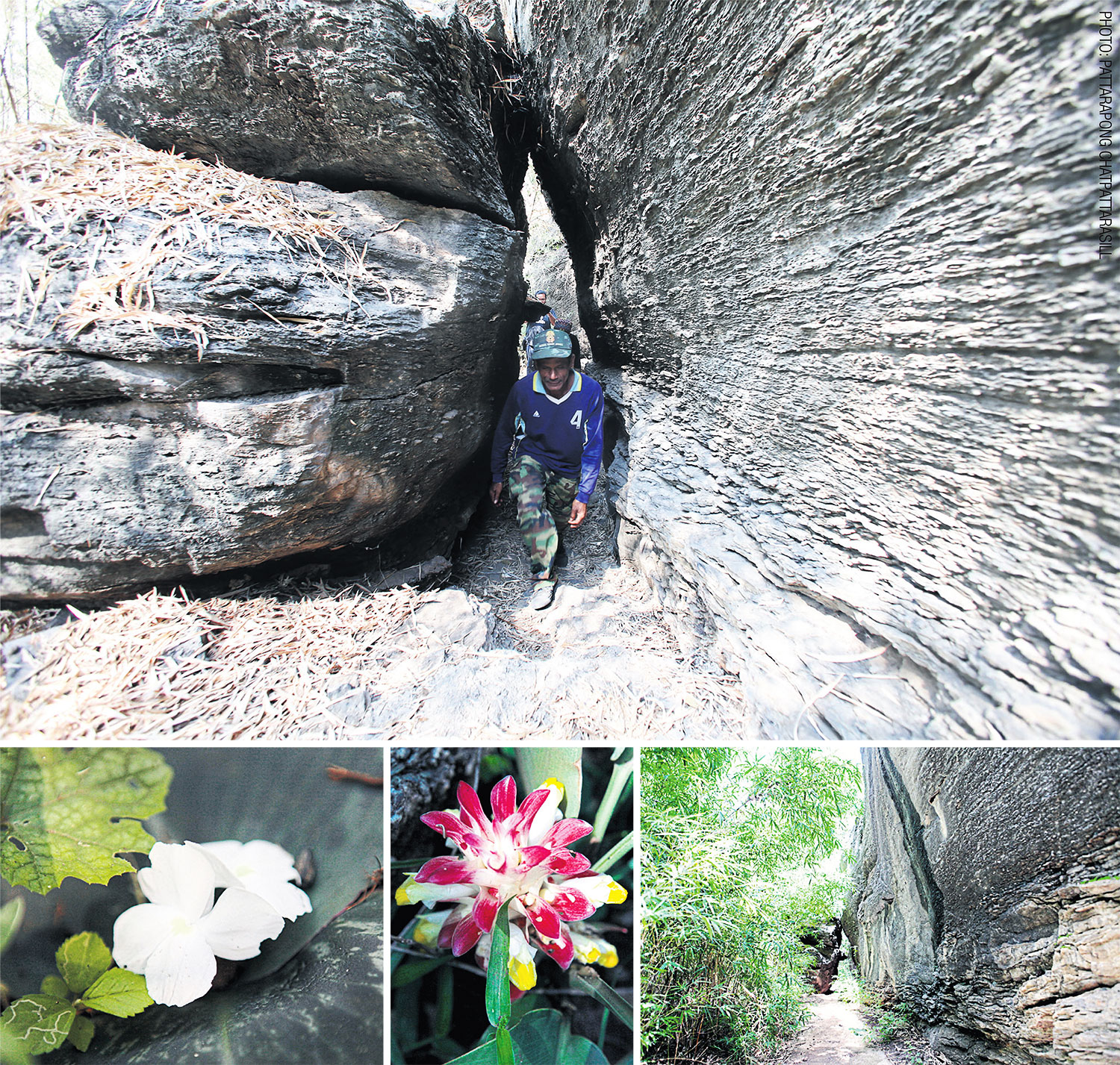 U Thong is quite a low-profile tourism destination compared to a number of popular attractions in the province such as the Bueng Chawak aquarium, the century-old Talat Sam Chuk community and the Buffalo Village. But the town is rich in history so it attracts a niche group of visitors, especially those who like visiting historical or cultural sites.

Historians believe that U Thong was a bustling trading city of an ancient civilisation called Suvarnabhumi, or Golden Land, that stretched from what is now Myanmar in the west to Cambodia in the east. The kingdom was named by King Ashoka of India who sent monks to spread Buddhism around 300 BC.

Archaeologists found many ancient artefacts indicating the glory years of the trading hub in the 1st-4th centuries when U Thong linked trading routes from the Mediterranean to India and China. At the time, the shoreline of the Gulf of Thailand was much higher than it is today, covering the current area of Bangkok.

A team of archaeologists from the Fine Arts Department excavated a large number of old artefacts from several sites in the U Thong district over the past decades. They found ling-ling-O, an earring made of either steel or stone popular around 500 BC or during the Iron Age, clay pottery, Buddha images and amulets, etched beads and symbolic icons of Hinduism like the Shiva Linga representing Lord Shiva. The artefacts indicated the civilisation of U Thong in past eras.

Some historians believe that U Thong was the capital of the Dvaravati kingdom (from the 6th-11th centuries). 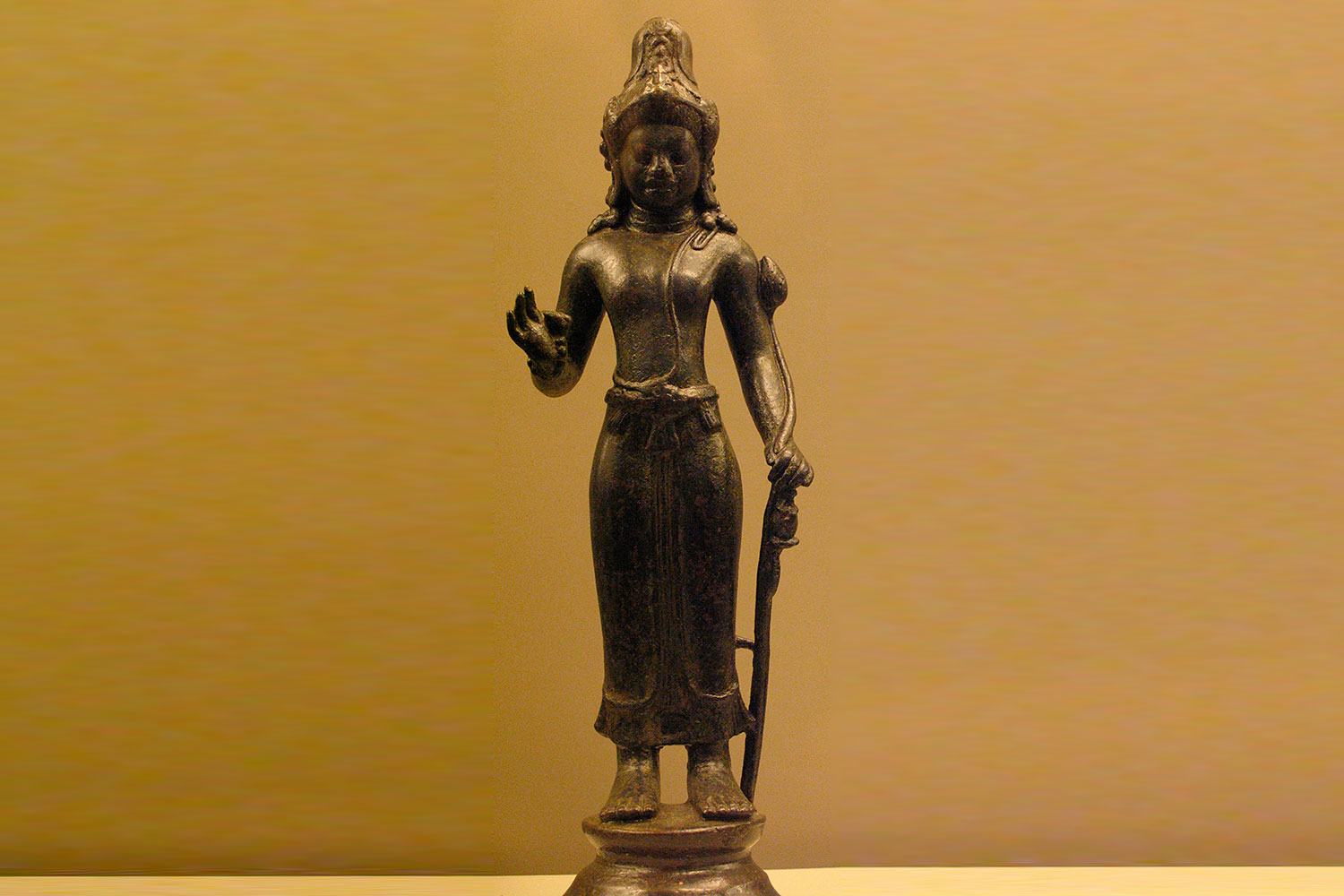 The bronze Buddha image found in U Thong shows the Srivichai art of the Srivijaya Kingdom flourished in the southern region of Thailand from the 8th-12th centuries. 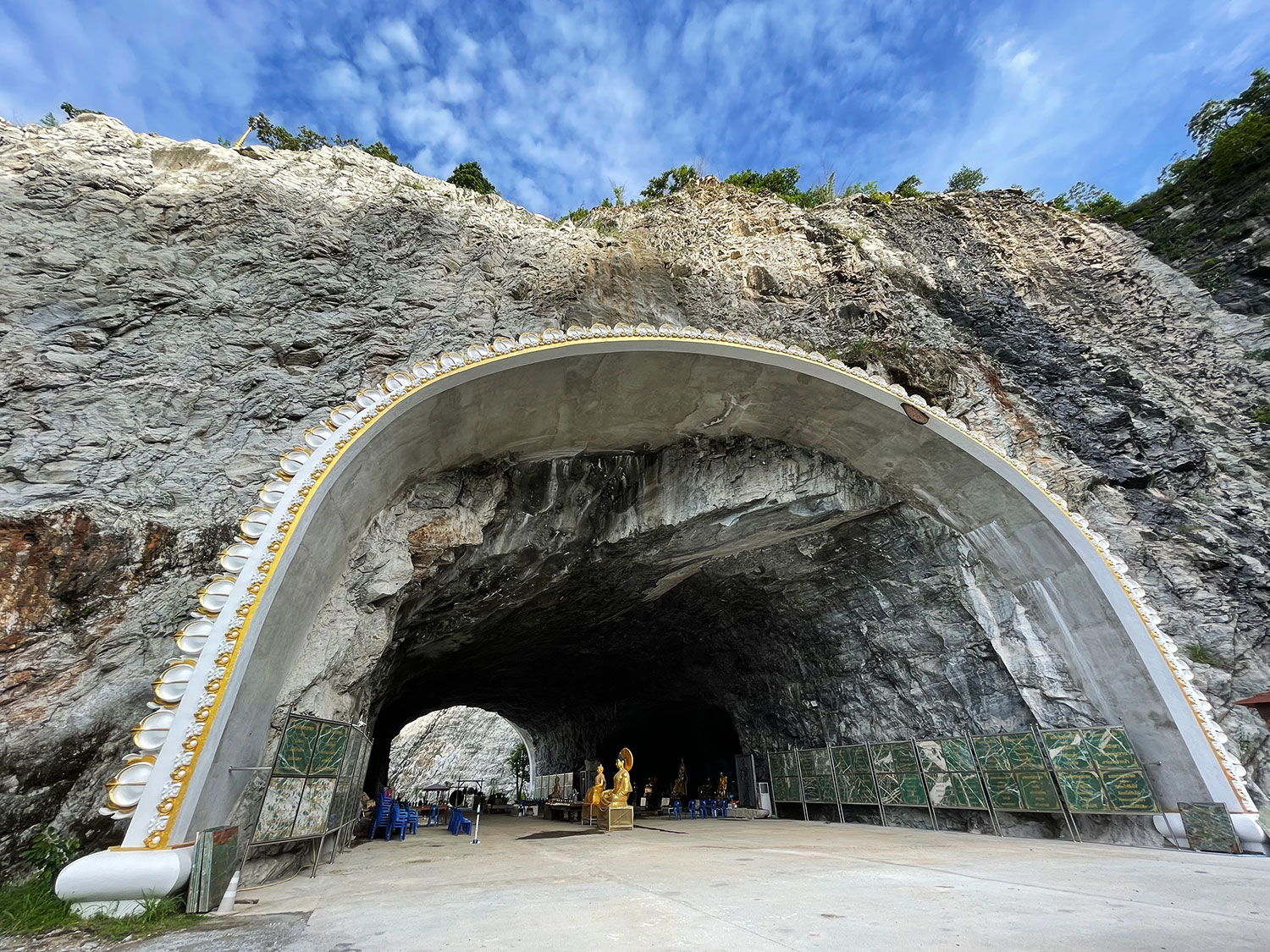 The tunnel behind the gigantic Luang Pho U Thong is like a prayer hall where visitors can pay respect to several Buddha images.

The city of U Thong was abandoned around the 12th century due to several theories including pandemic, war, flood or even the shift in the shoreline making it difficult for people to conduct maritime trade. The present settlement is believed to have started in the late Ayutthaya period or more than three centuries ago.

To remind people of the long history from when Buddhism was spread from India to Thailand, the Luang Pho U Thong sculpture was built in a teaching posture. It was carved in a pang prod phuttha manda or the attitude of teaching dhamma to his mother. The seated Buddha sculpture sits cross-legged with his right leg on top of the other. His left hand rests on his lap while his right hand raises to chest level. The index finger touches the thumb. (People believed that the attitude is a symbol of the Year of the Ox, which is also this year.)

When I visited the site for the first time in late 2014, construction had just started. I saw a large image of the seated Buddha at the site. I hardly imagined that the deserted area full of dust would turn out to be a park with ponds. Although there weren't many tall trees yet, the area is under renovation to make it suitable for people to practice meditation or just drop by to pay respect to Luang Pho U Thong, whose formal name is Phra Phuttha Pusaya Khiri Sri Suvarnabhumi.

On top of the cliff is a golden pagoda. It is located around the head of the Buddha sculpture to house Buddha relics. At the back of the sculpture is a 50m-long tunnel. It houses Buddha images and five carved seated Buddha sculptures in different postures. Each image is carved on the tunnel wall. 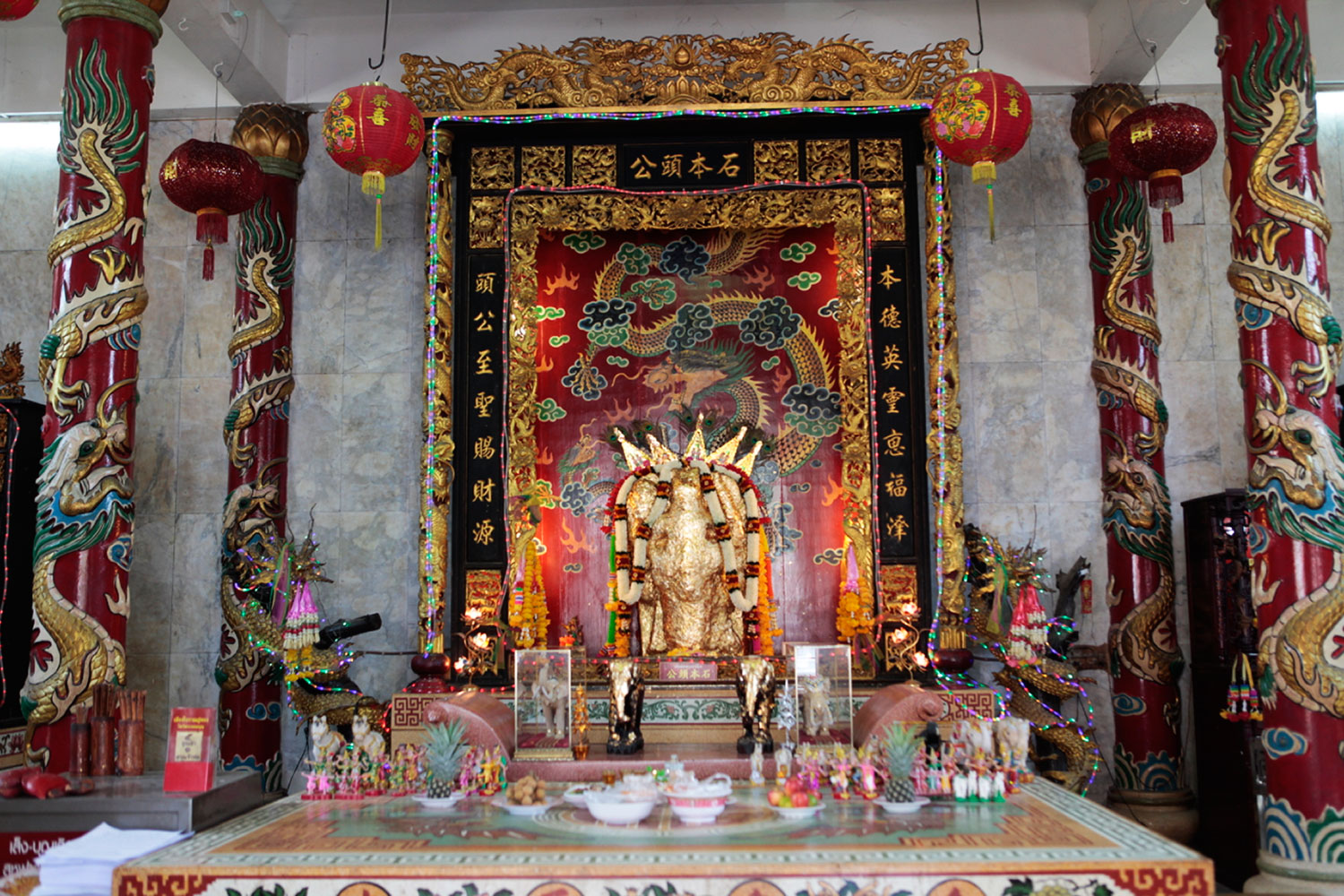 The Vishnu god of the Davaravati period is the city guardian. The sculpture is housed in the San Chaopho Phraya Chak shrine on Thao U Thong Road. 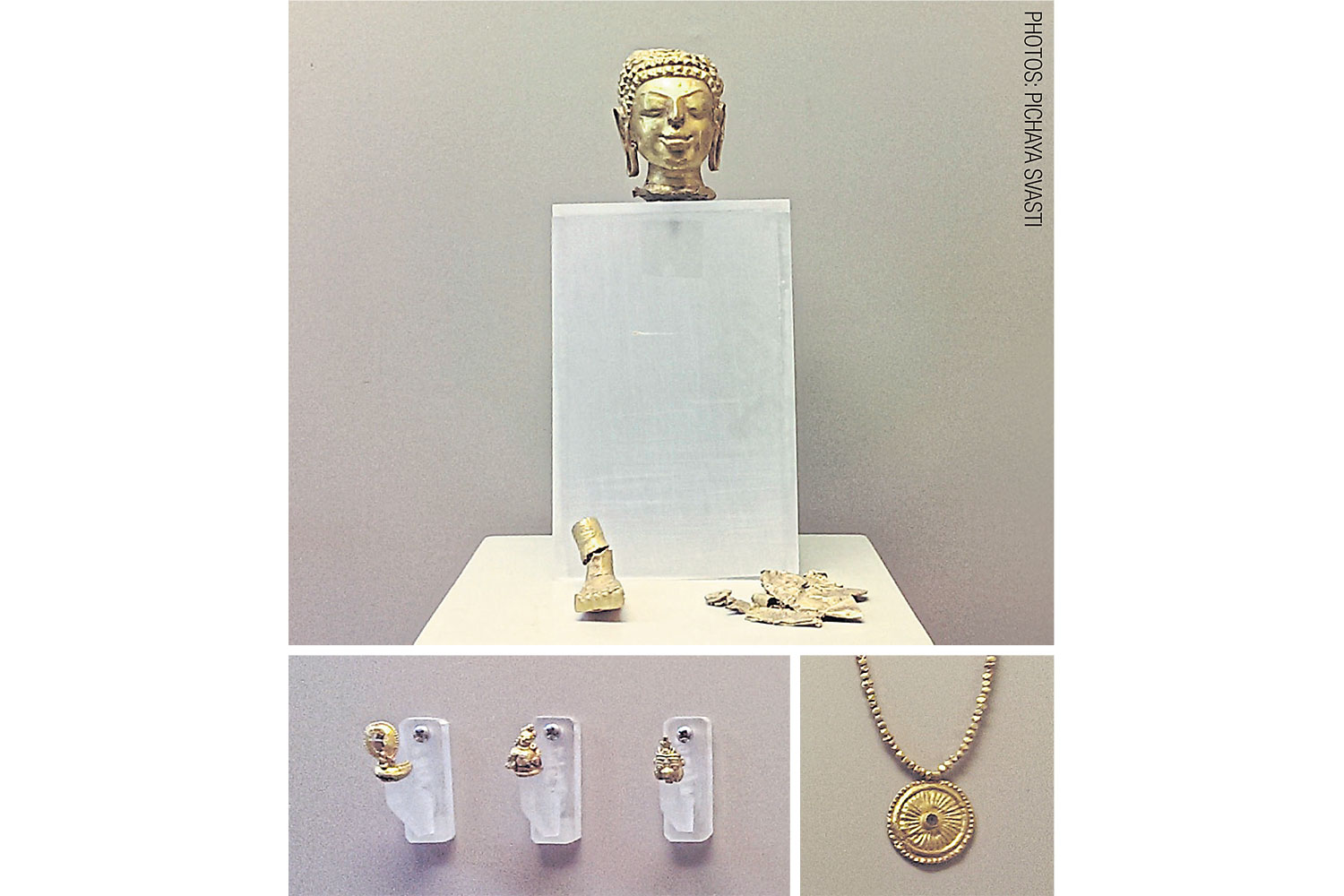 Gold ornaments excavated from archaeological sites in U Thong. The artefacts date to the 7th century. 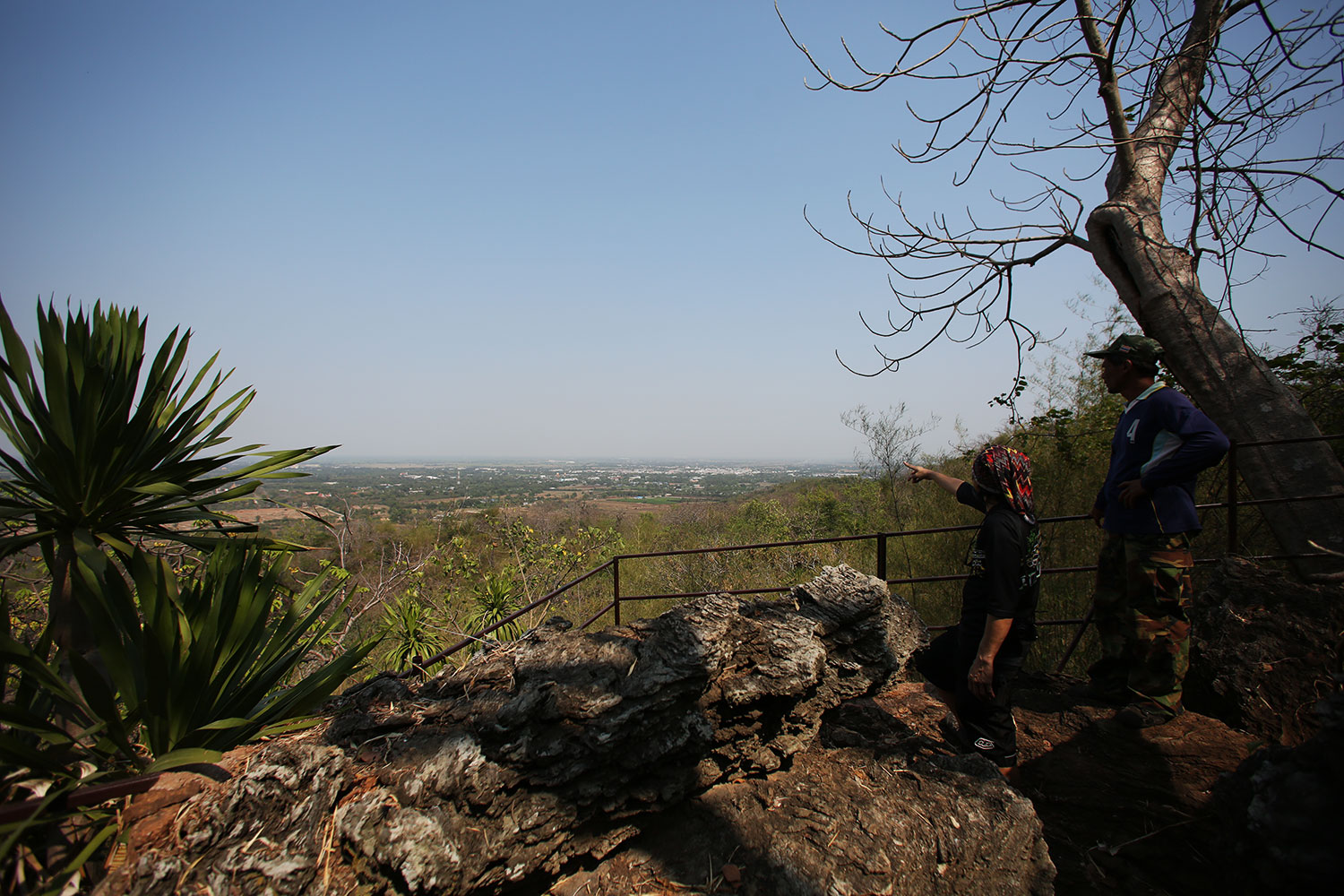 U Thong National Museum on Malai Man road is a recommended place to visit because of its abundant collections including these clay dolls that date back to the 6th century. Ancient necklaces made of colourful beads excavated from the ruins in U Thong. 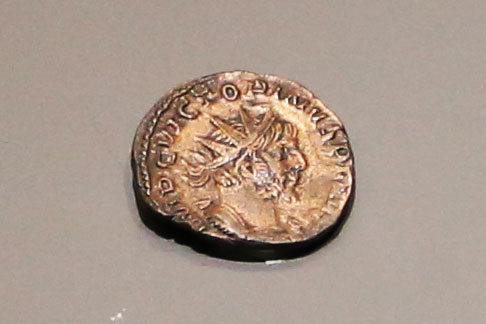 A coin of Marcus Piavonius Victorinus, Roman emperor from 260-274AD, was found in U Thong. (Photo © The Fine Arts Department) 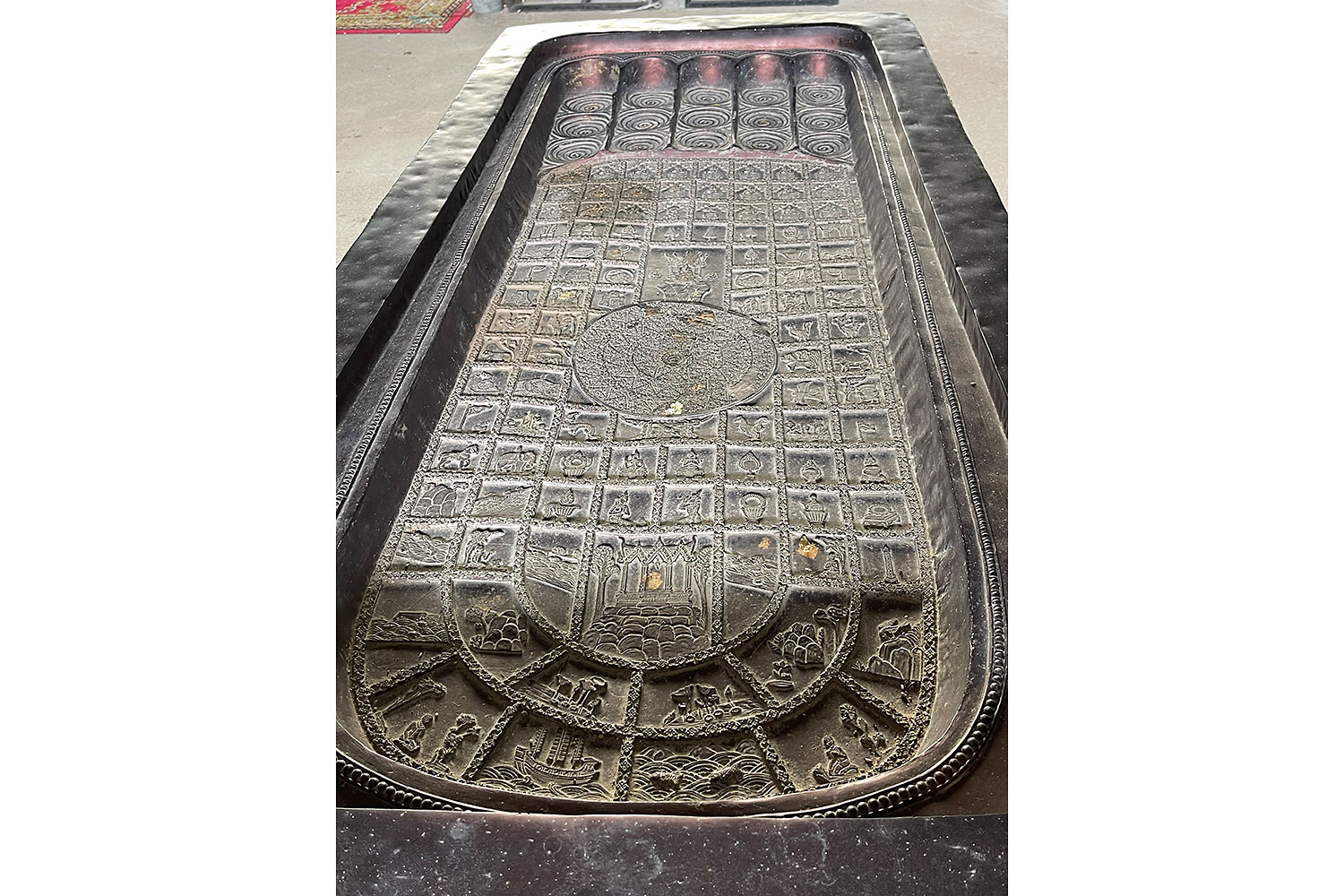 Stone slabs depicting the story of the Buddha are displayed around the base of Luang Pho U Thong.

A short drive from Luang Pho U Thong is Phu Hang Nak, a stone forest located in Phu Muang Forest Park, which covers an area of 1,725 rai. The forest is a food bank for locals who forage for food or herbs. The forest also has small waterfalls and streams as well as walking trails to promote the stone forest as a tourist attraction.

You need to have a guide to explore the site, which is available on site. The choices of forest trekking start from an easy trail to a one-day trip. You will have a chance to see wildflowers, strangely shaped sandstone formations from 480 million years ago and a lookout point where you can see a panoramic view of U Thong.

About 3km from the stone forest is Wat Khao Phra Sri Sanphetchayaram or Khao Phra temple for short. The temple houses a revered reclining Buddha image in a cave. The name is Luang Pho Sang Sisan Petch, found in the Dvaravati period (6th-11th centuries). From the cave, you can take a staircase or a trail to the hilltop.

On the top of the hill, you can also spot the gigantic Luang Pho U Thong sculpture. The top of Wat Khao Phra also has a historical site. You will see the remains of an old stupa believed to be built during the Dvaravati period and renovated during the Ayutthaya period. The ruin has only its square base (10m in width and 1.3m in height). It is one of seven remains of ancient pagodas found in U Thong. The Fine Arts Department registered all the sites as national heritage sites.

The trip to U Thong cannot be complete without a visit to U Thong National Museum, located 3km from Wat Khao Phra. The museum exhibits old artefacts found in archaeological sites and ruins in the city. Among them are various Buddha images and Hindu gods, gold beads, Roman coins, earthen inscriptions, earthenware and bronze Buddha sculptures.

Before leaving the town, you can stop at the city guardian shrine known as San Chaopho Phraya Chak. The Chinese shrine does not house Chinese gods but a Vishnu god sculpture dating back to the Dvaravati era. The image is highly respected by locals who believe it will bless them with happiness and safe passage. Then you may be blessed with a safe journey back home. 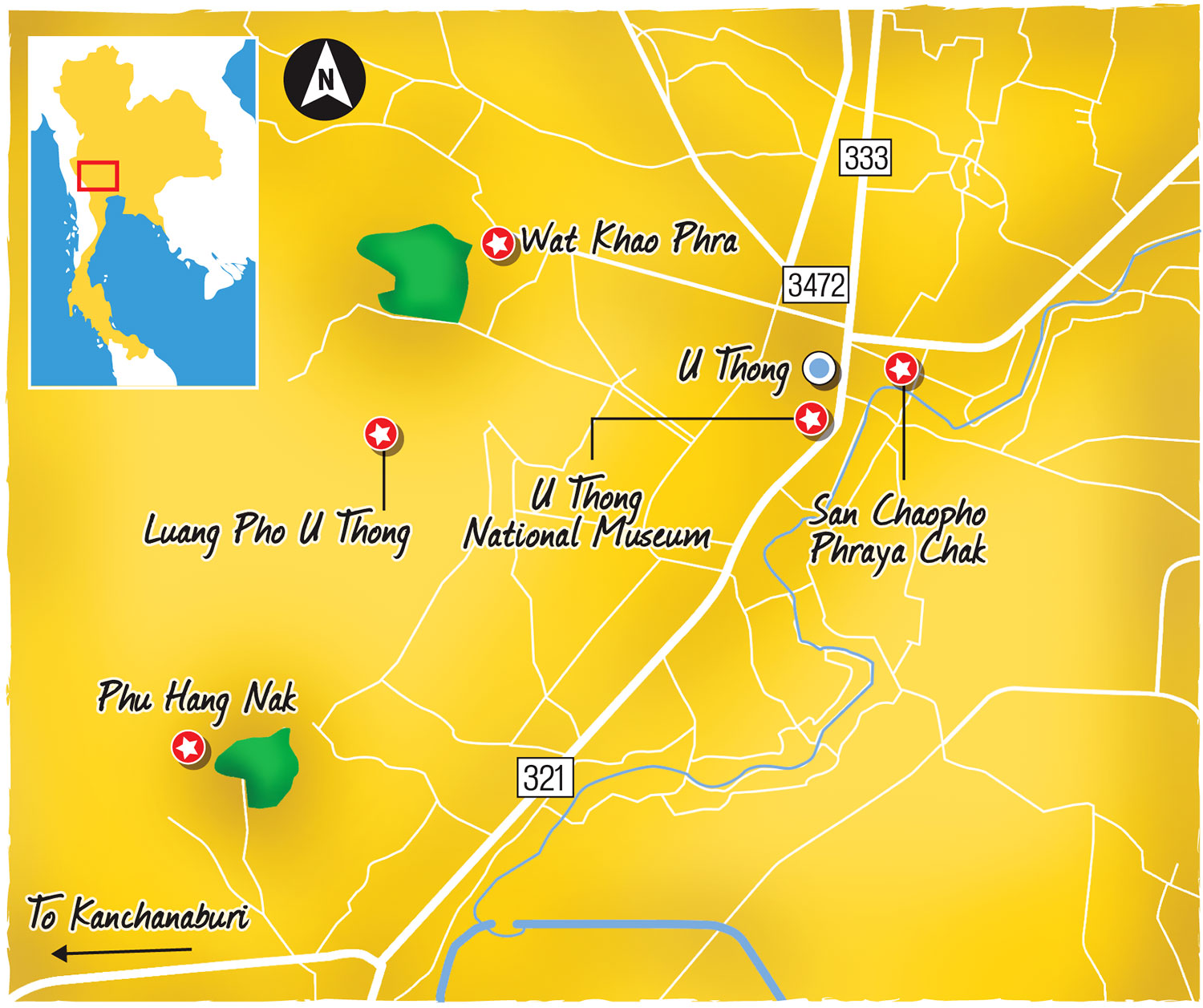