Once a thriving trading hub on the banks of Tha Chin River, the ancient town of Nakhon Pathom is home to a slew of historical ruins and temples reminiscent of pre-historic human settlements and the Dvaravati civilisation.

To commemorate its 50th anniversary, the Phra Pathom Chedi National Museum has reopened its doors following a massive three-year facelift, with a new display of 260 rare artefacts from the Dvaravati era (6th to 11th centuries), which is attracting day-trippers interested in Thailand's rich cultural legacy.

Back in the reign of King Rama V, HRH Prince Damrong Rajanubhab served as the Interior Minister and travelled around the country to enhance the landscape. Nakhon Pathom was added to the list after numerous artefacts like a Dvaravati inscription and Buddha images were discovered during the construction of a rail line. 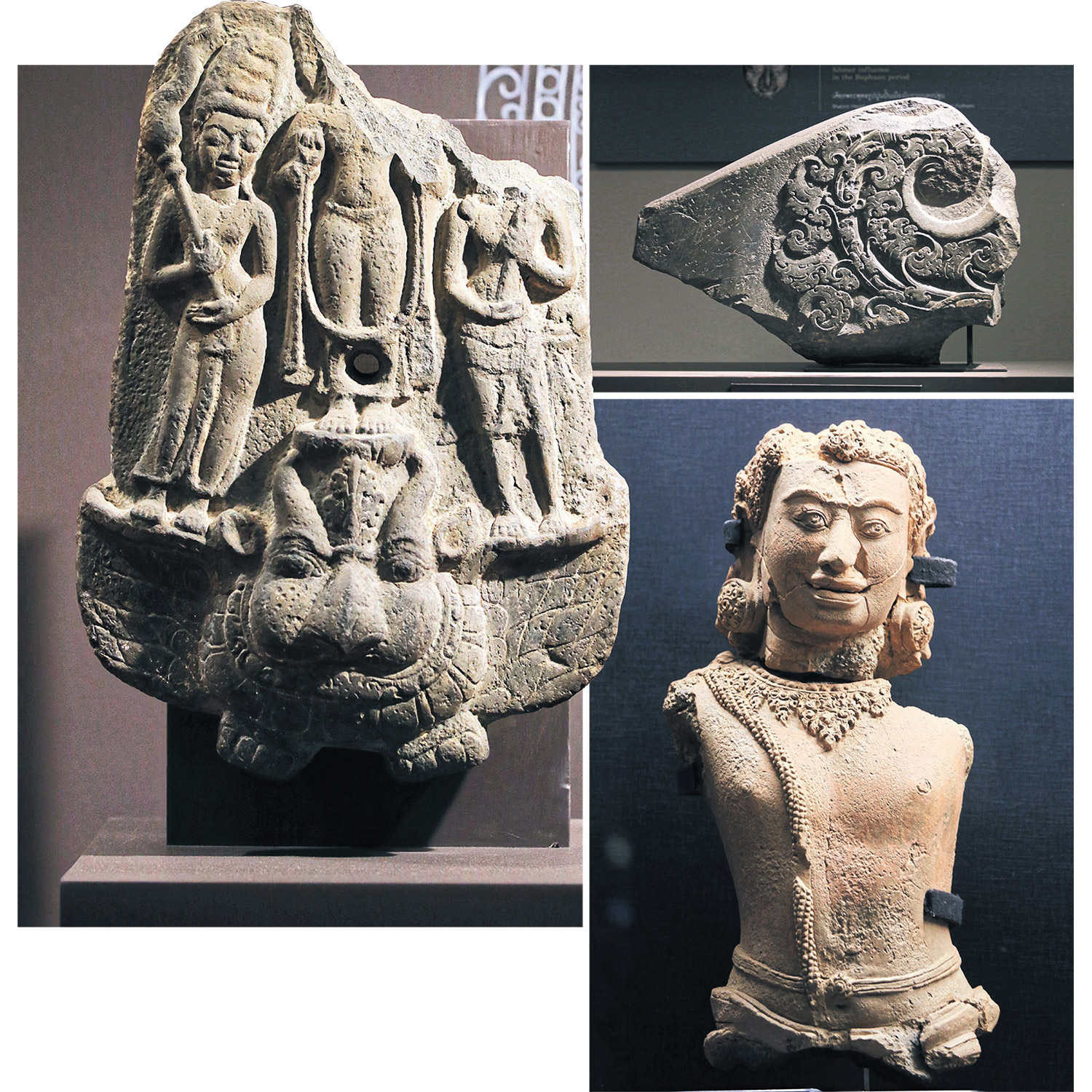 The Phra Pathom Chedi National Museum boasts a rare collection of 260 artefacts from the Dvaravati period, including this terracotta sculpture of a demon, right, which was created between the 11th-12th Buddhist centuries.

Influenced by Western culture, Prince Damrong developed an exhibition by collecting objects he found during his journeys, bringing them to the National Museum. He learned to analyse objects with a scientific approach.

In Nakhon Pathom, the museum originally belonged to Wat Phra Pathom Chedi Ratchaworawihan before being transferred to the Fine Arts Department in 1961. It took four years to construct a new facility, which opened in 1971.

With a budget of 8 million baht, it has turned its 200m² space into a fun learning area for future generations by integrating modern technology and improved lighting design to shed light on history. The exhibition is divided into seven zones to provide visitors with a 360-degree perspective.

"Focusing on Dvaravati arts, the Phra Pathom Chedi National Museum was moved to its current location to showcase a wide range of artefacts found at historical sites across the city. We found a lot of dhamma wheels in Nakhon Pathom since it was one of the first sites where Buddhism expanded its influence. Besides this location, the U thong National Museum in Suphan Buri and Si Thep Historical Park in Phetchabun have long been popular places to learn about Dvaravati culture," said Somlux Khomtrong, curator and chief of Phra Pathom Chedi National Museum. 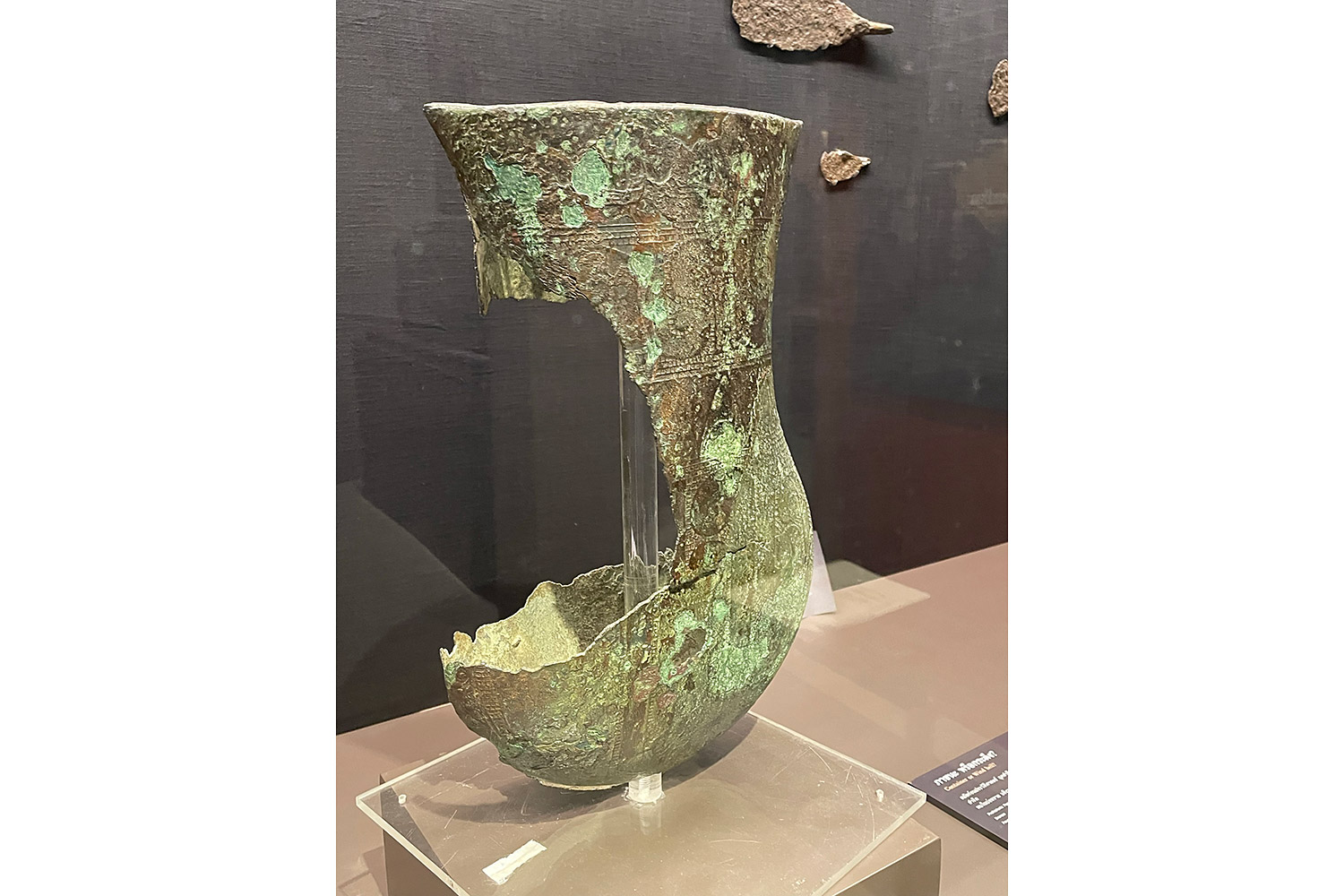 A container made in the Bronze Age. (Photo: Pattarawadee Saengmanee)

"Another museum at Phra Pathom Chedi is lined with a collection of archaic Buddha images, a coffin of King Rama VI's beloved dog Jarlet and the throne which King Rama IV used during a restoration of Phra Pathom Chedi to tell the story of this old town."

Behind the entrance, the first zone is devoted to the pre-historic era and visitors can learn how Nakhon Pathom grew into a community between 1,500 and 2,500 years ago. Stone tools, earthenware fragments and bronze utensils discovered there indicate that humans lived through agriculture and animal husbandry.

On view is a collection of mining equipment, fishing gear, a spindle whorl and bracelets made around 1,500 to 2,700 years ago, as well as a vase-like metal container with three stripes of the vowel A.

Its pattern is positioned vertically up and down and it's one of seven artefacts that were unearthed and are being shown to the public across the world.

The second zone takes visitors back to the 12th-16th Buddhist centuries when Dvaravati culture spread to cities like U Thong, Kampaeng Saen, Dong Lakhon, Khu Bua and Nakhon Pathom, where historical sites, ruined structures and artefacts have been discovered. 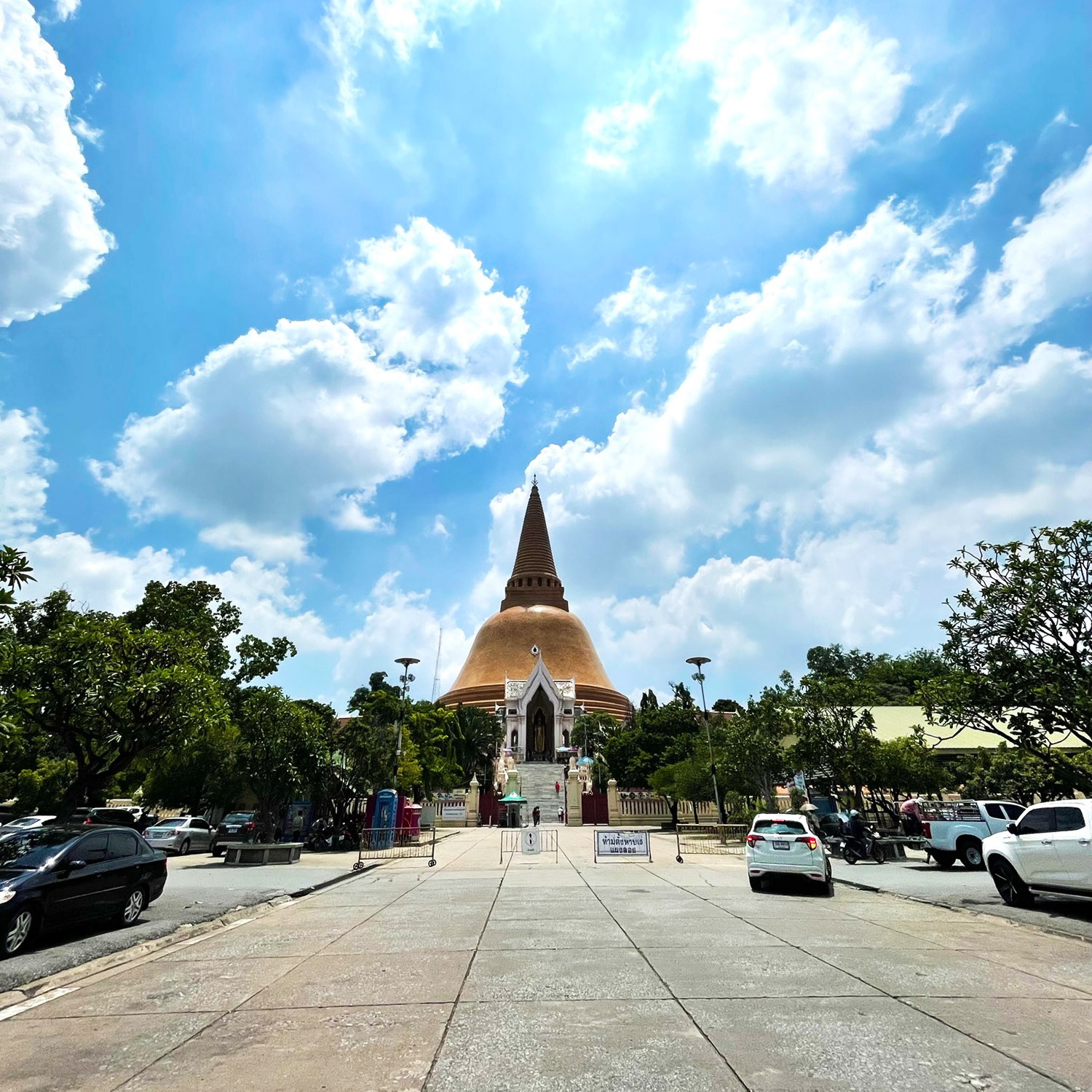 "We embraced Dvaravati culture from India and the city of Dvaravati is also mentioned in Ramayana. We discovered inscriptions praising the kings and old prayers in Mon language and Pallava scripts at many temples," Somlux added.

The Dvaravati-style inscriptions marked the beginning of the historical era and were frequently discovered on stone slabs or religious artefacts such as dhamma wheels, stupas or architectural elements describing Buddhist principles.

The Sanskrit inscription at Phra Ngam Temple is also highlighted. It honours the monarch who won the war and gave wealth to the cities of Timiringka, Hastinapura and Dvaravati, all of which are referenced in the Mahabharata.

The monarch also presented 30 mango trees, 400 cows and 156 young quails to Pashupati, or Lord Shiva, according to the inscription. Pashupati, which means "lord of the beasts", is the earliest name used in the Gujarat area, where Dvaravati was located. 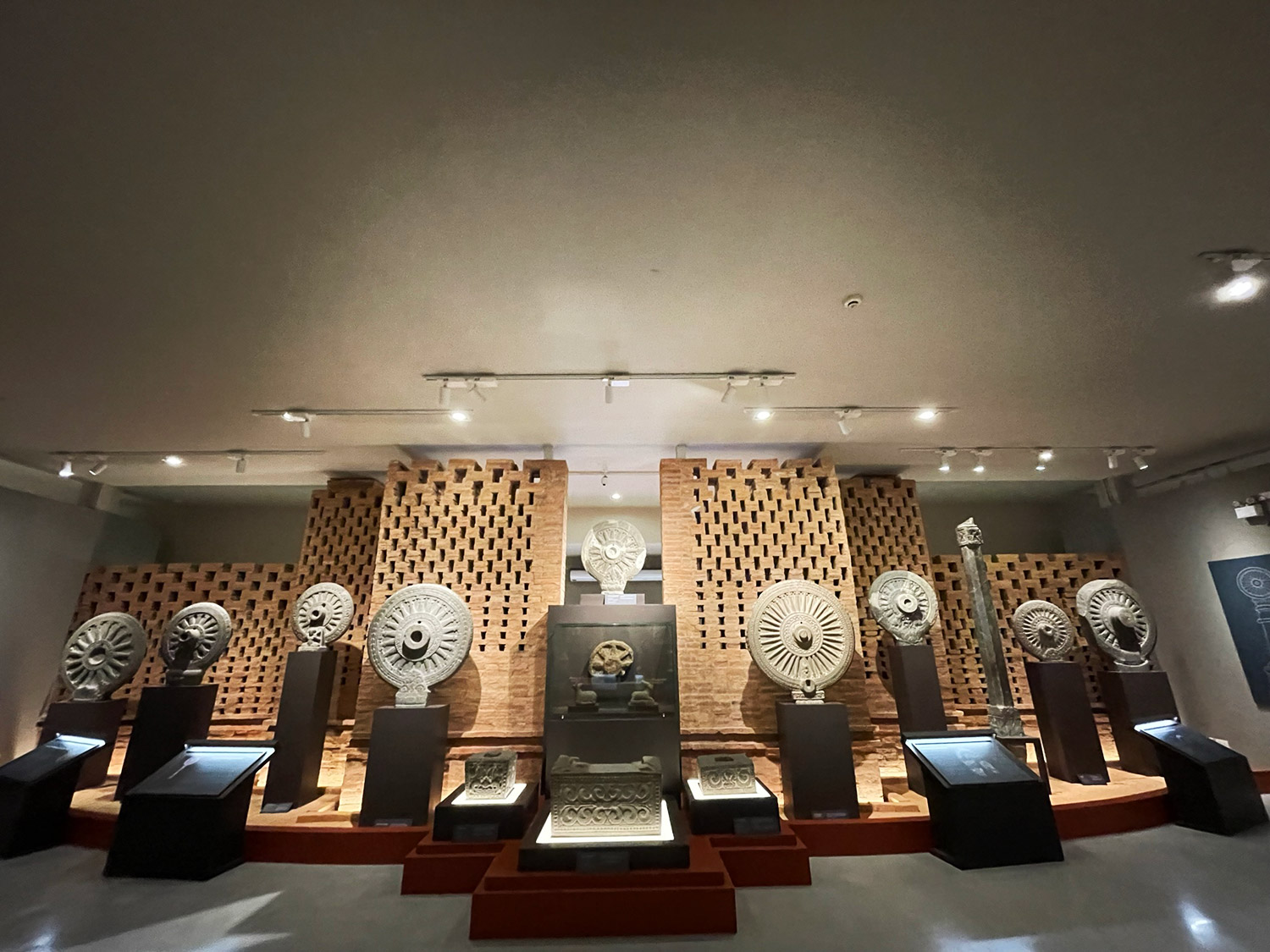 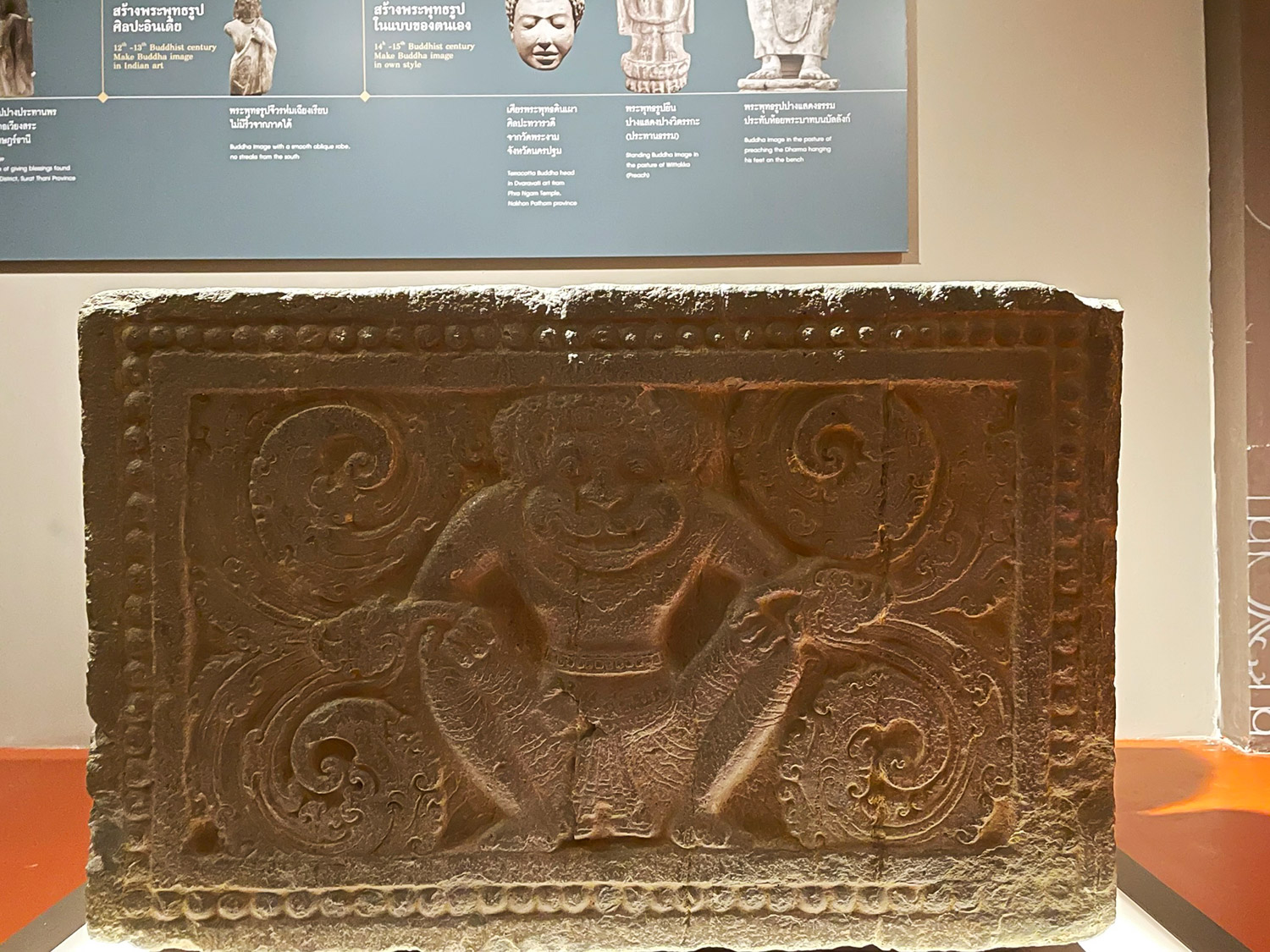 This base of a dhamma wheel was carved in a Narasimha pattern, one of the 10 avatars of Vishnu. (Photos: Pattarawadee Saengmanee) 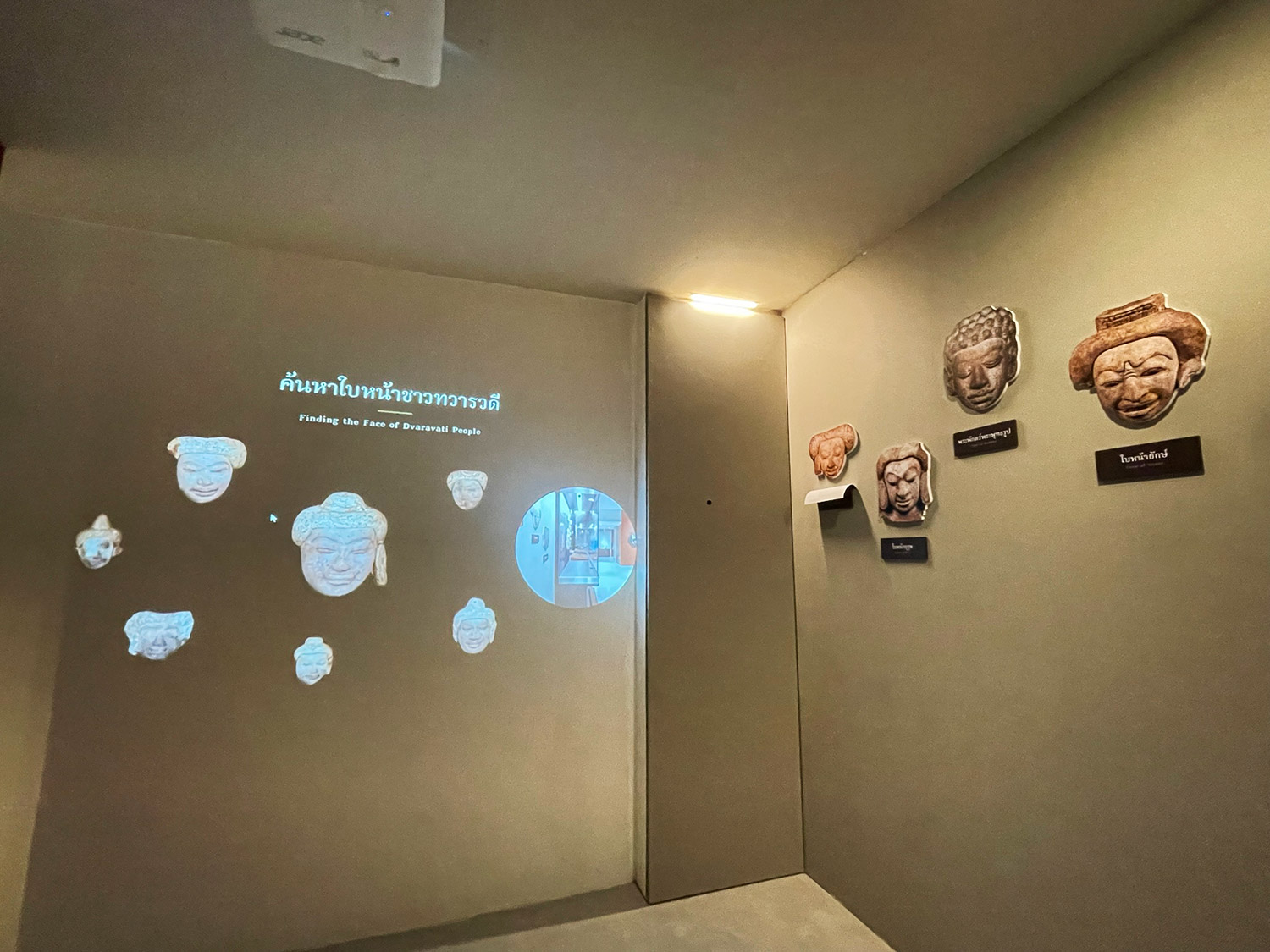 Tang Ha Seng is recognised for its barbecue pork with rice.

The inscription at Pho Temple reveals details about the temple's construction and features ancient Mon and Pallava scripts. At the time, the temple used a line of coconut trees to mark its boundary and housed a swan pole, silver vessels, a Buddha statue and a chapel for two necromancers.

The terracotta inscription was crafted in the 14th Buddhist century before being discovered at Khok Chang archaeological site. Designed to resemble a horoscope table, it features 12 columns and radial lines, with post-Pallava letters in each column.

A pot-like stupa model with a pinnacle and a short bottleneck is inscribed with Ye Dharma prayer in Pallava calligraphy style and Pali language on its cylindrical basement. It was created between the 12th and 16th Buddhist centuries and discovered at Phra Ngam Temple.

At the third zone, visitors can learn how Dvaravati inhabitants lived and see fashion trends through a series of timeworn sculptures and jewellery of various designs. The museum has turned an area into an interactive photography studio, using facial recognition technology to match your face with humans, Buddha, demons or dwarves.

Alongside, there's a showcase of human stone sculptures with a round face, wide eyes and a large nose as well as age-old bead necklaces and earrings made between the 12th-16th Buddhist centuries.

Nakhon Pathom is a fertile region, so people were involved in agriculture, which explains why rice husk was used for bricks and pottery. According to Tang dynasty diplomatic records, this city was accessible to direct sea channels, making it a major supplier of forest and marine products. 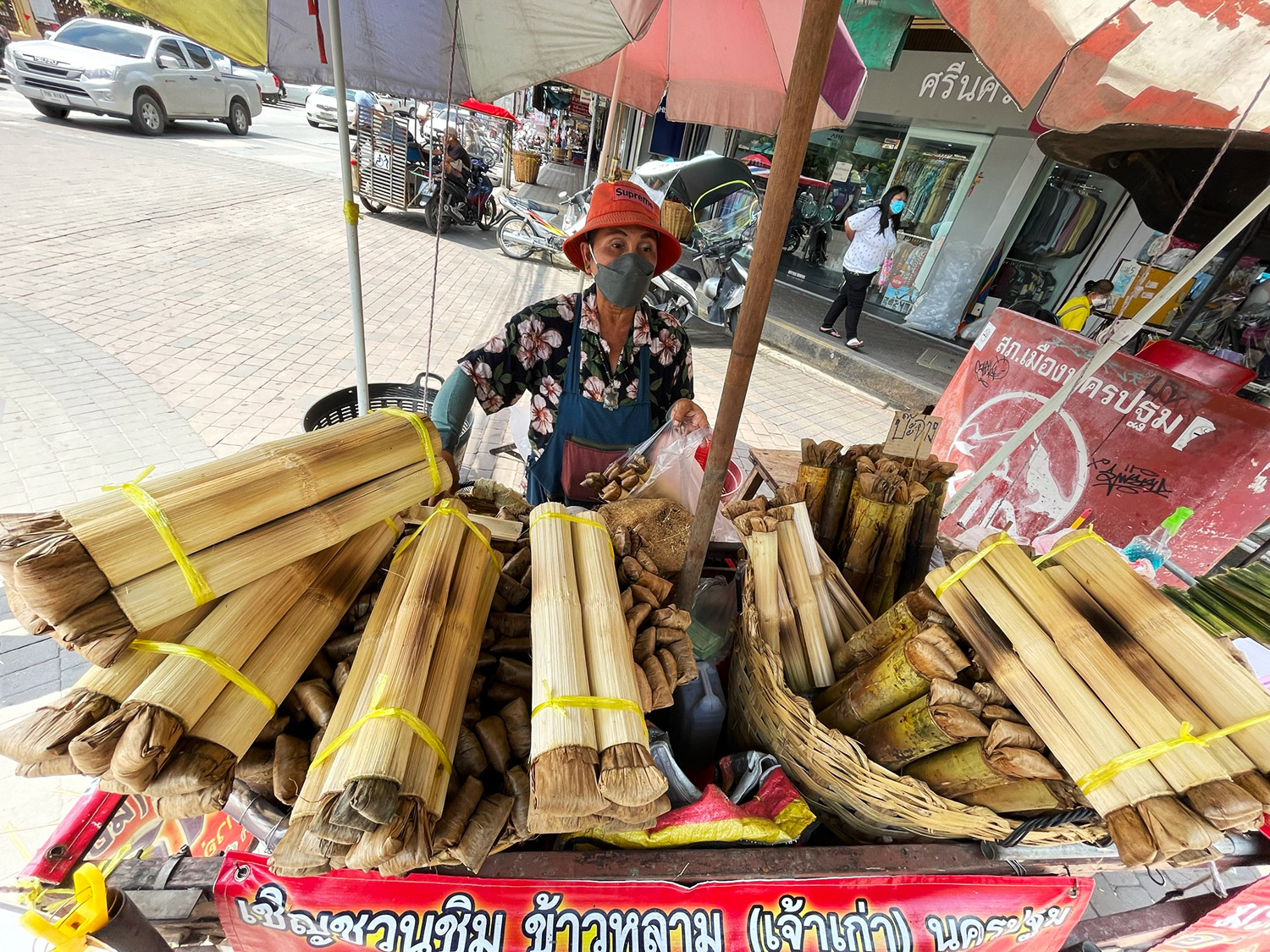 Khao lam or grilled sticky rice in bamboo is popular among tourists. 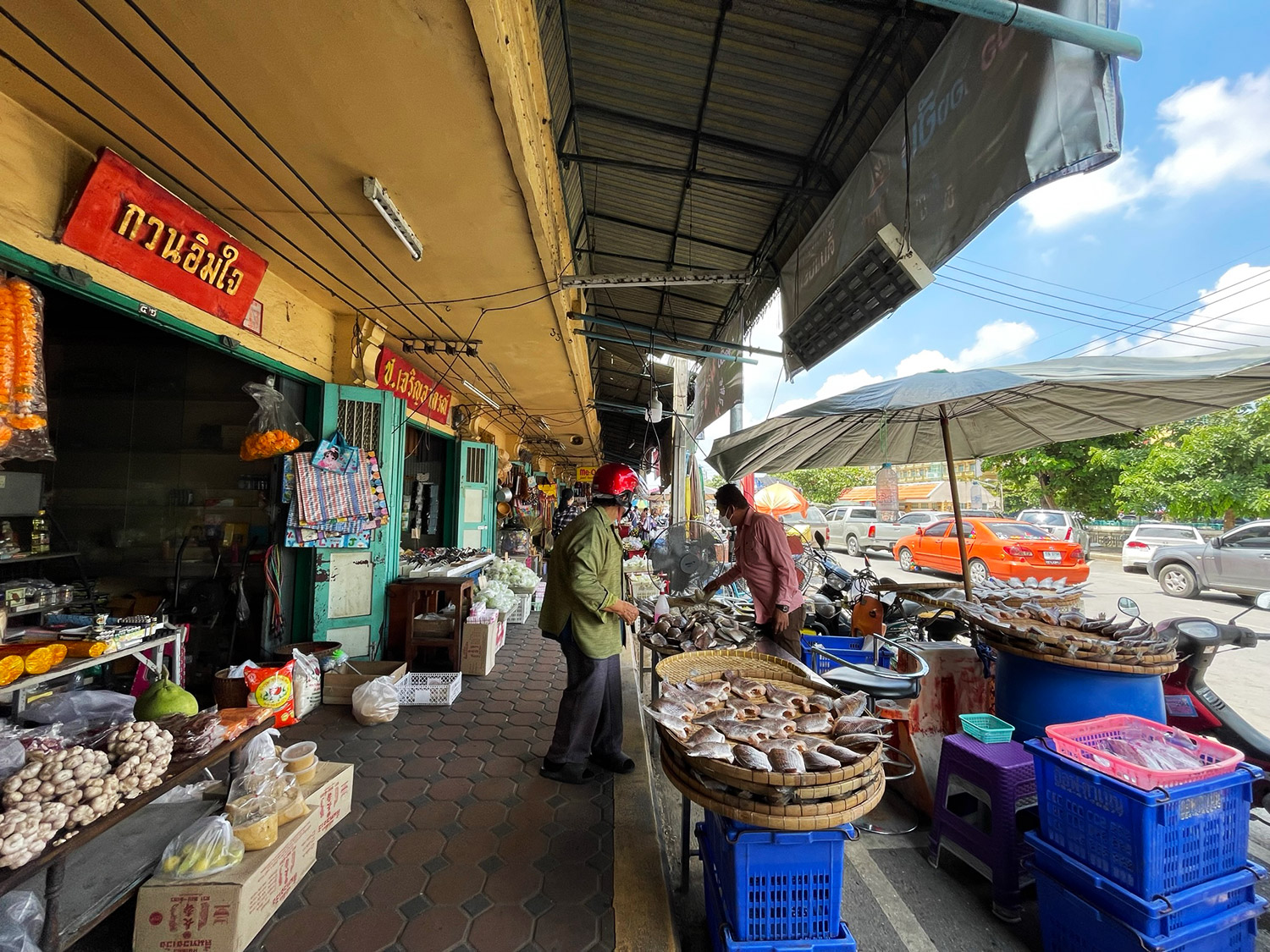 "In historical religious sites, we found a lot of face sculptures, all of which showed the progression of sculptural artworks from the past to the present. They were inspired by local folks and international sea merchants since Nakhon Pathom was a significant maritime commercial centre during the 14th Buddhist century," Somlux said.

"We discovered statues of a giant and dwarf in the basement of the historical temple. They were wearing gorgeous costumes and metal jewellery, indicating their status as nobility."

The next zone is about religious pluralism as Dvaravati citizens had merged Buddhist and Hindu beliefs to create holy sanctuaries and deity statues, as well as rituals to achieve nirvana. Visitors can see a stone platform for bathing a Buddha statue and a stone slab adorned with floral motifs, which a Brahman used in religious ceremonies.

The heart of the museum is reserved for a striking edition of nine dhamma wheels in different designs made between the 12th and 16th Buddhist centuries. Nearby, visitors can observe how artisans used granite, limestone and sandstone excavated from cliffs in Phetchaburi to create Dvaravati-style statues of Buddha and Hindu deities.

This corner showcases stone carving equipment such as a hammer and chisels as well as a Buddha image sitting in a meditation posture and the Buddha statue seated on a throne from the 13th to 15th Buddhist centuries.

Leaving the museum, we return to the present and explore Phra Pathom Chedi, which is believed to have been constructed by King Ashoka. It was restored in the reign of King Rama IV to house the Lord Buddha's relics and four viharas of Buddha statues in different postures.

After a half-day tour, those looking for something to fill their tummy can visit an old market. It's just a few minutes walk from the temple to the old Tang Ha Seng shop famous for its Chinese delicacies such as barbecued pork with rice, chicken rice, noodles and chicken with rice and gravy. Not far away, many stalls are selling khao lam or grilled sticky rice in bamboo prepared according to original Nakhon Pathom recipes.