Lighting up the sky
Travel

Lighting up the sky

After the much-loved Yi Peng Festival returned to the northern town of Lamphun last week to celebrate the beauty of Lanna heritage, Bangkok rings in the festive season with the first edition of the International Lantern and Food Festival, which will light up the Ancient City Museum until Dec 6.

It's a joint effort between Thailand's largest outdoor museum and Index Creative Village to bring colour back to the capital and create a new night museum experience which people of all ages can enjoy. This will be a sequel to the Muang Boran Light Fest and be included in the yearly schedule of events.

"This year, Index Creative Village has been tasked with designing the Thai Pavilion for World Expo Dubai 2020, with the goal of promoting tourism and Thai culture on a global scale. There, visitors could experience a multimedia presentation in which the famous khon mask dance was performed against a backdrop of funky graffiti created by young artists. It showed coexistence of the old and modern via the use of advanced technology," said Kreingkrai Kanjanapokin, founder and group chief executive officer of Index Creative Village.

"Our pavilion received positive comments from foreign visitors and has been rated among the three most popular pavilions for several years. I was motivated to create the International Lantern and Food Festival as a result of this. We'll use narrative approaches and cutting-edge technology to bring history to life. Simultaneously, we've rearranged Thai music to produce a modern but unique tone." 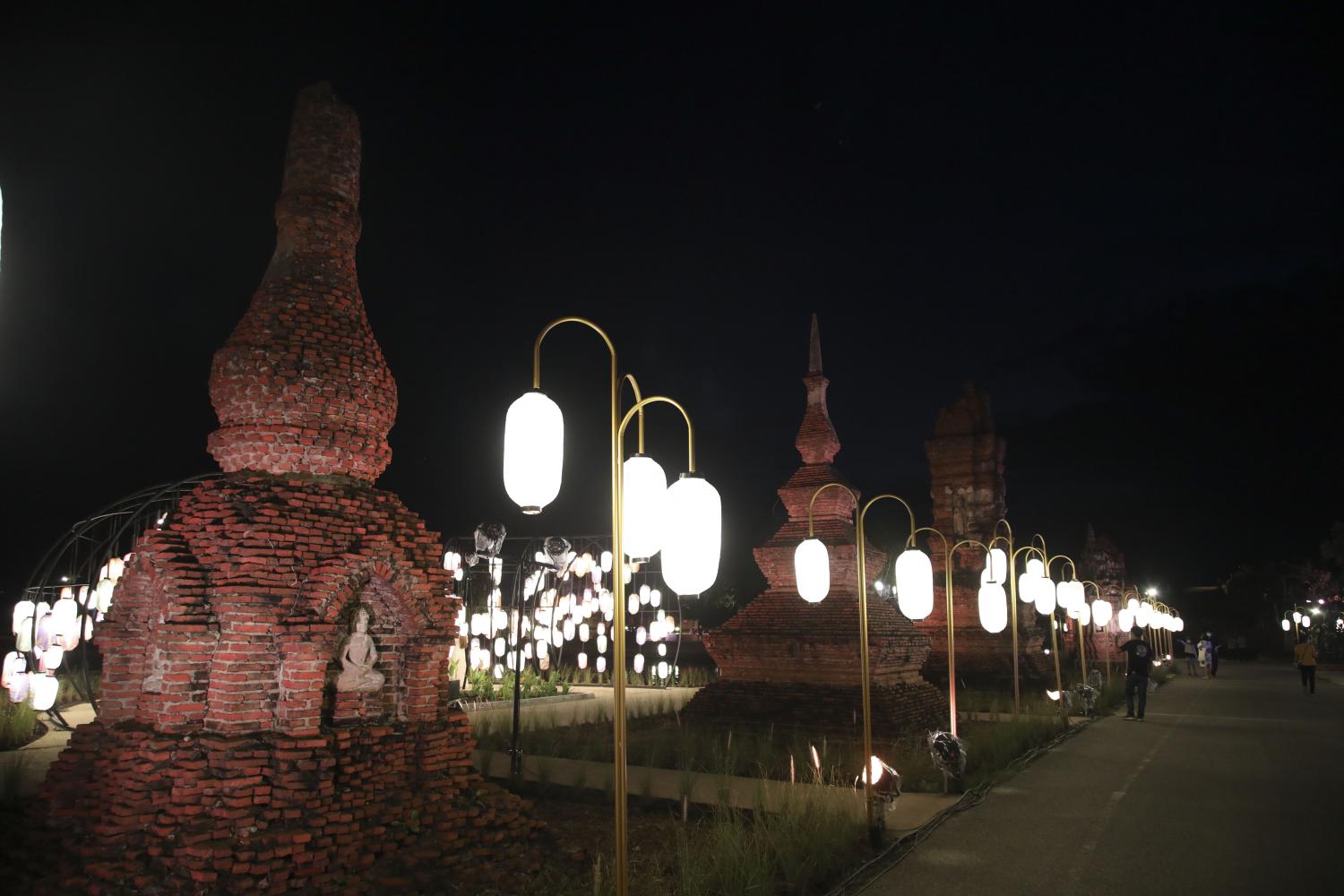 Spread over 20 rai, Muang Boran spent 10 million baht enhancing the landscape and constructing new attractions and roadways in the Northeast so that visitors can enjoy seamless biking or walking trips to learn about Isan culture. The festival features eight picturesque check-in sites and more than 1,000 colourful hand-crafted lanterns from various countries such as Japan, Vietnam, China and Thailand.

"The Central Region is dedicated to the Muang Boran Light Fest as the lantern festival is set in the lower Isan region zone, home to replicas of Isan landmarks such as the Phimai Sanctuary and Prasat Phra Wihan. In the past, this zone used to be like a back alley that visitors would pass since it was obscured by high plants and shrubs. That's the reason why we've utilised colourful lanterns and spotlights to bring it back to life," said Ploynapat Sirisoontaropas, deputy managing director of Muang Boran Group.

"Muang Boran has the potential to become Thailand's event hub and not only a tourist destination. In 2018, we held the Kenny G Charity Jazz Night concert. We want to focus on art, music, religious ritual, culture and sports to represent people's lifestyle."

Perched on a 54m-tall artificial hill, Prasat Phra Wihan (Preah Vihear) is a popular vantage point to view the spectacular vista of the Ancient City at twilight and visitors can imagine exploring the Thai-Cambodian border in the northeastern village of Si Sa Ket. This stone sanctuary is half the size of the original, which was erected during the reign of King Suryavarman I and consisted of four groups of Khmer-style stone structures. 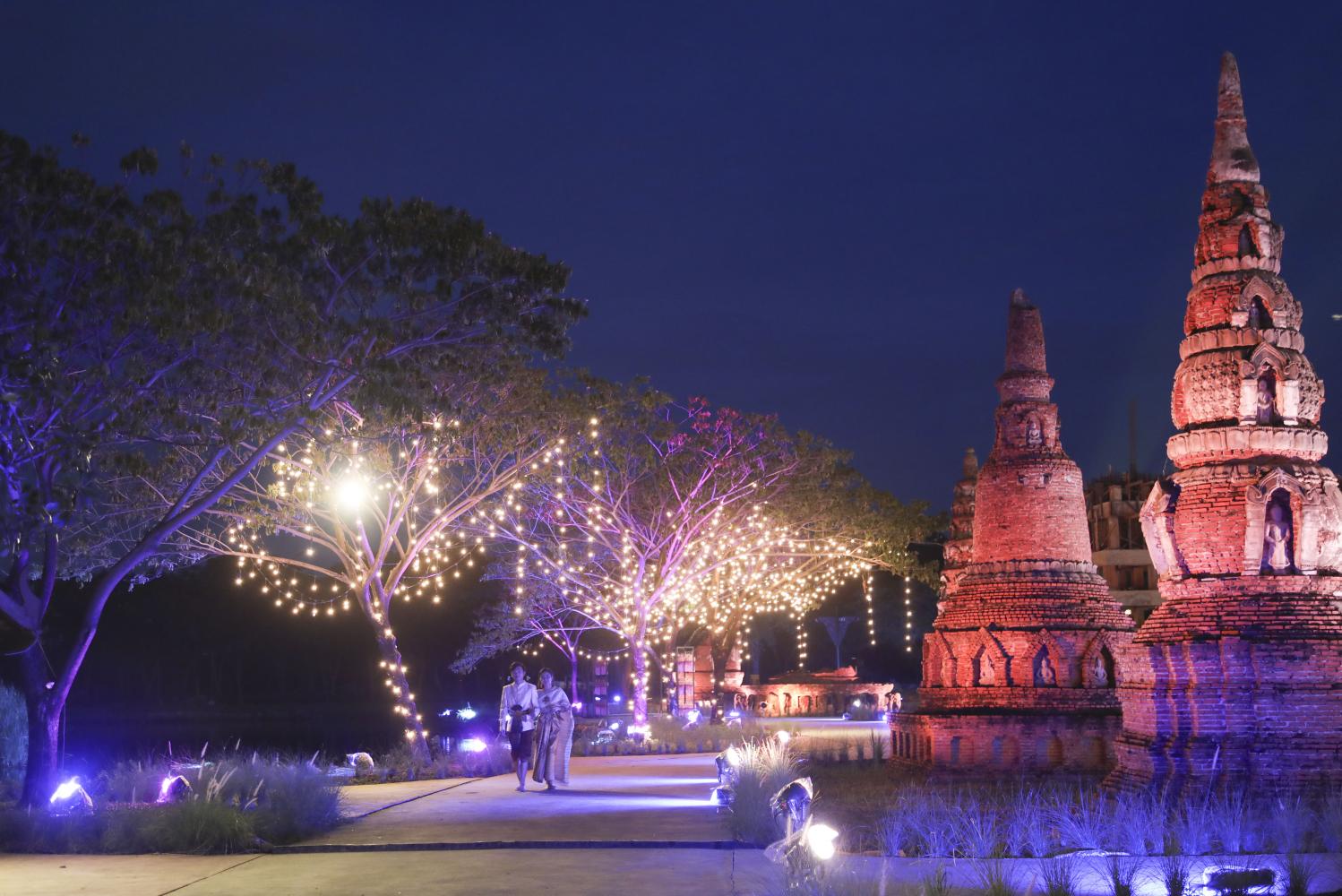 Not far from the artificial hill, visitors can check-in at Phimai Sanctuary. It is Thailand's largest Khmer-style Buddhist monument, with a massive prang composed of white limestone and sandstone that faces south, pointing to the Khmer Kingdom, as opposed to other Khmer-style sanctuaries, which typically face east.

It has carved pediments depicting religious myths, fight scenes from the Ramayana epic, Shiva dancing and goddess Uma riding a bull. There's also a rectangular laterite prang with re-entrant angles that are said to have been initiated during the reign of King Jayavarman VII.

When the sky darkens, Prasat Sadok Kok Thom is illuminated by a full set of colourful lighting systems to transport visitors back to the 15th Buddhist century when Hindu influence reached Siam.

Surrounded by two-layered walls, visitors are welcome to wander around and snap selfies against the backdrop of three sandstone structures. In the town of Sa Kaeo, only the rectangular foundation up to the lintels of the original prang is visible, while the other two have vanished. 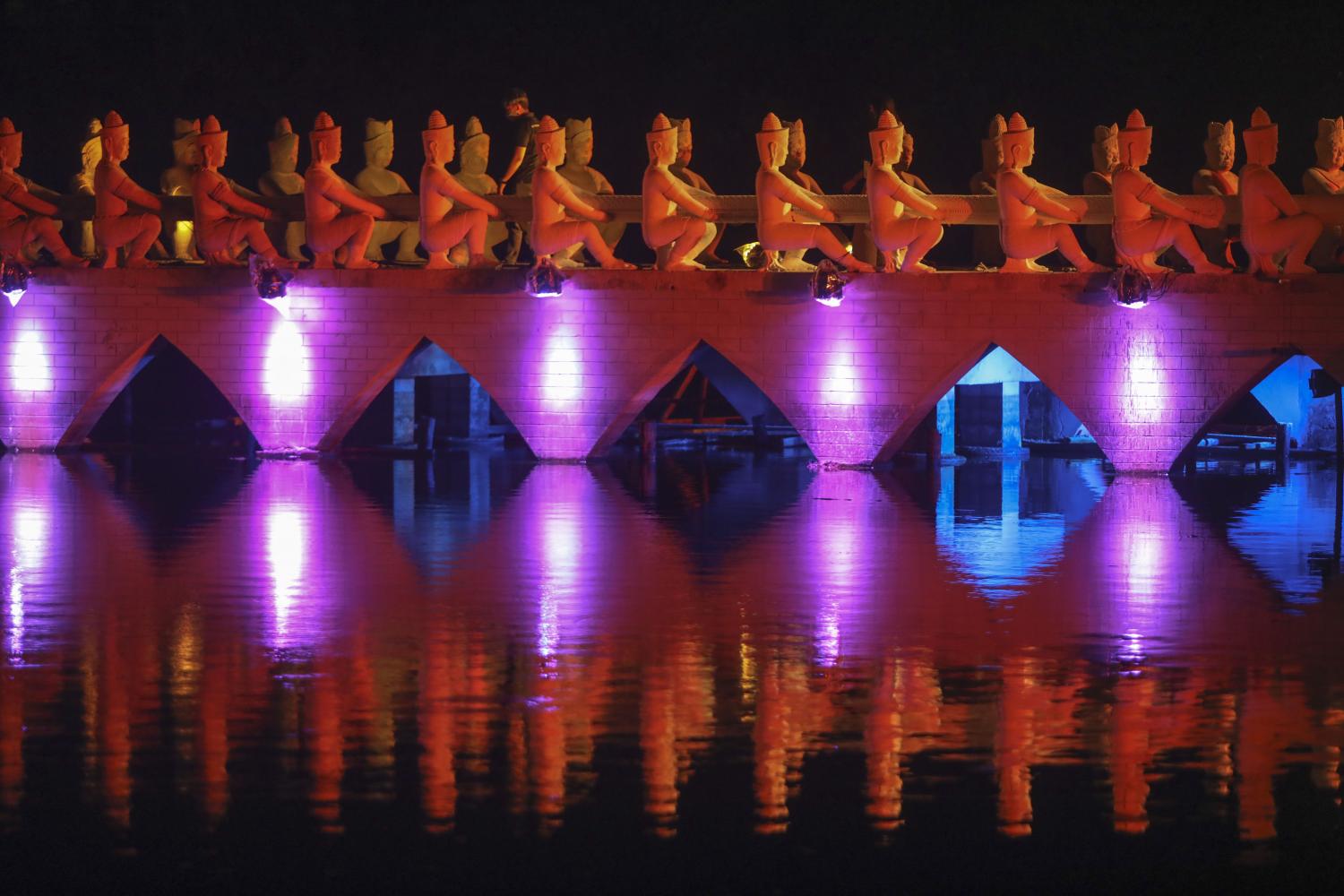 Just a few steps away from Prasat Sadok Kok Thom, visitors can walk through a long tunnel of more than 100 white rope lanterns crafted by Chiang Mai-based artisans as well as a multicoloured arch fashioned out of Hoi An-style lanterns and a forest of vibrant star-like lanterns.

"This festival sheds light on the way of life, local wisdom and the evolution of lanterns from the past to the present. A lantern appears to be a piece of art, in which artists demonstrate their creativity and innovation. For example, Arabian lanterns are made of brass and are durable and large. Glass lamps of various forms are popular in Europe, while Japan and China have been recognised for painted paper lanterns," Kreingkrai said.

"Due to the Covid-19 pandemic, we've had shipping issues since several nations have closed their borders. As a result, this event serves as a warm-up hors d'oeuvre. Next year, we hope to work with the Ministry of Culture and embassies to send additional lanterns from other countries."

Trimmed with Chinese-style paper lamps, the gleaming street leads visitors to the Garden of Sacred Stupas built in various ages. Following Buddhist beliefs, the stupas were constructed to contain the relics of Buddha and to highlight distinctive architectural arts in each region, which have been passed down from generation to generation. The massive pond stands in the heart of the Isan region, and its bank has been turned into a recreational area with more than 100 Japanese painted lights representing beautiful carp, flowers and kimono-clad Japanese entertainers to evoke festive vibes.

The journey continues at Dvaravati Wihan, whose red brick floor is adorned with yellow flower-shaped lighting to commemorate Buddhist arts. It was constructed to house a colossal Buddha statue and to symbolise the Dvaravati Kingdom's sway in the northeastern region, which lasted over 1,000 years.

Next door, the Sikhoraphum Sanctuary is lit up to represent Hindu beliefs dating back to the 12th Buddhist century. The compound is home to five brick prangs, with the central tower's carved lintel depicting Shiva performing the cosmic dance.

The new kid on the block is the sparkling City Gate of Mueng Fa Daet Song Yang dating to the Dvaravati period. It is based on a low-relief stucco found on the stone boundary marker in Kalasin's Fa Daet Song Yang historical site, which depicts the Buddha attaining enlightenment and preaching to his family in Kapilavastu. 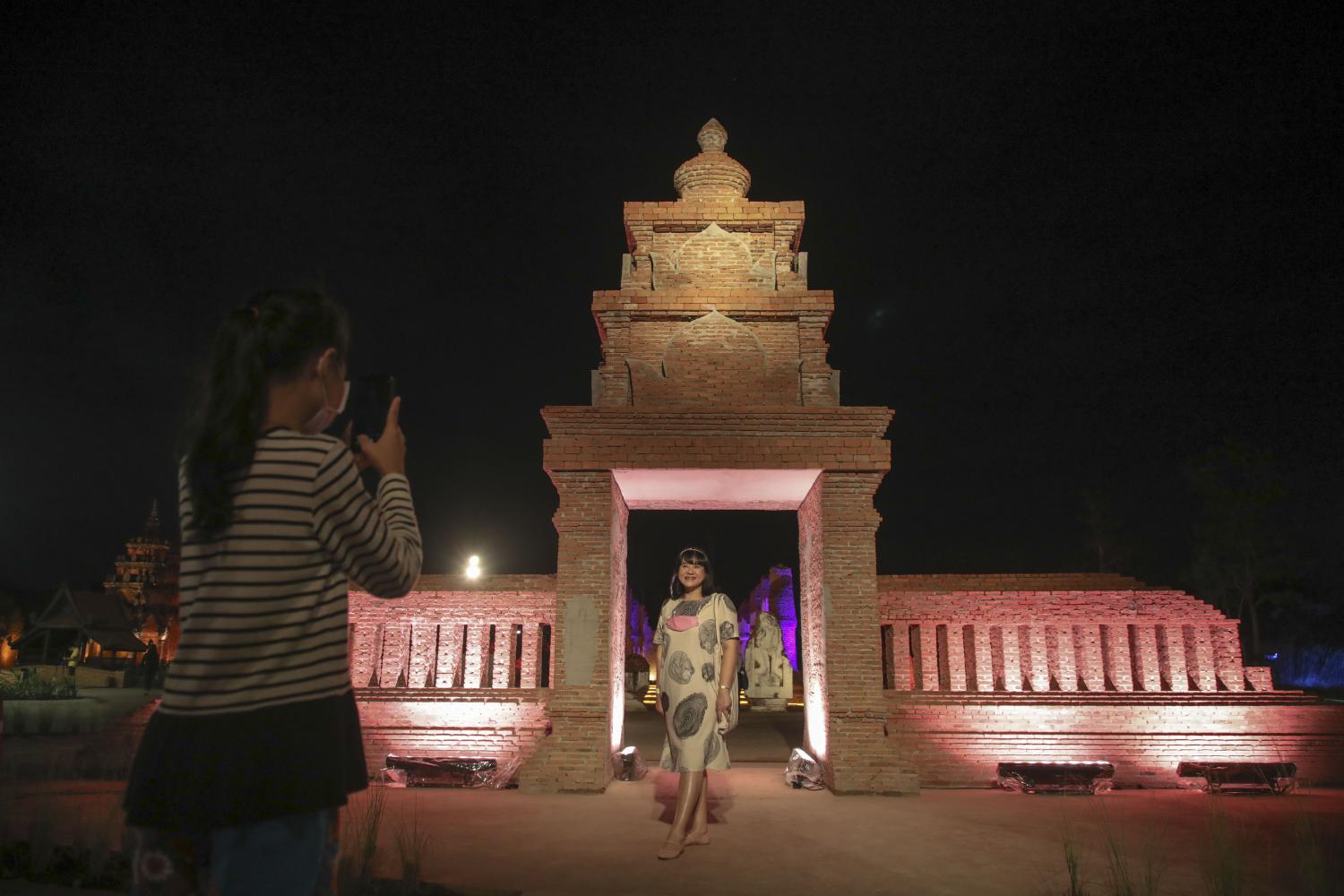 Another addition to the map is the replica of the Spean Thma bridge from Angkor Thom. It is lined with a row of deity-like figures carrying two six-headed nagas to commemorate the glory days of the Khmer Empire.

Perfect for those looking for a venue to enjoy the Loy Krathong Festival, Muang Boran will host a spectacular firework show Friday night with a market that serves a variety of international dishes as well as fresh seafood from Bang Pu.

"We just launched a skatepark, which is set against the backdrop of Thai literature as well as a lake for stand-up paddleboarding and kayaking to provide new experiences for young visitors and families. We will also host a surf skate marathon on Dec 25 and 26," Ploynapat said.

The International Lantern and Food Festival continues until Dec 6 from 6-9pm. Tickets are priced at 250 baht for local residents to 400 baht for non-residents and are available at villageofillumination.com. 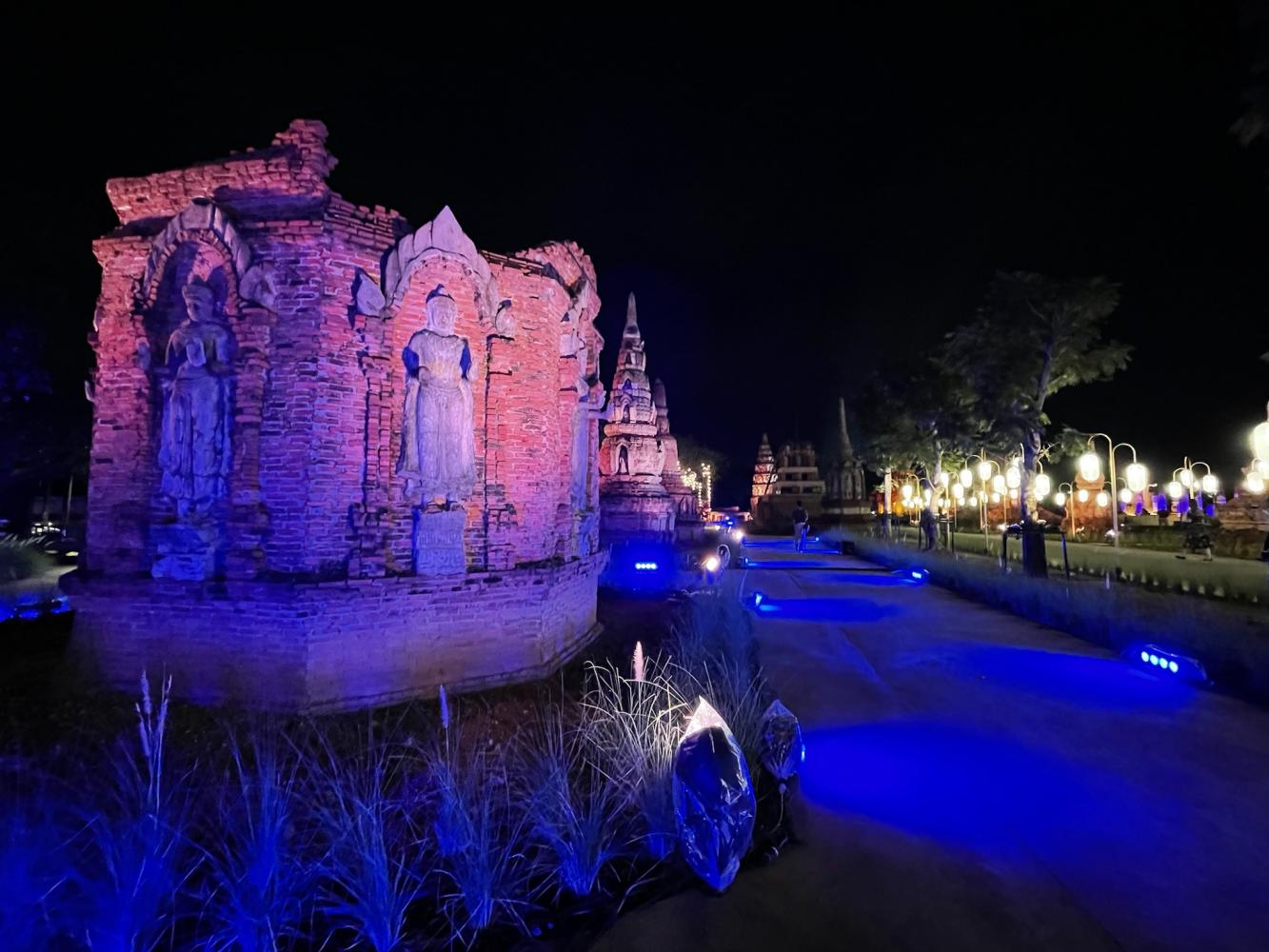 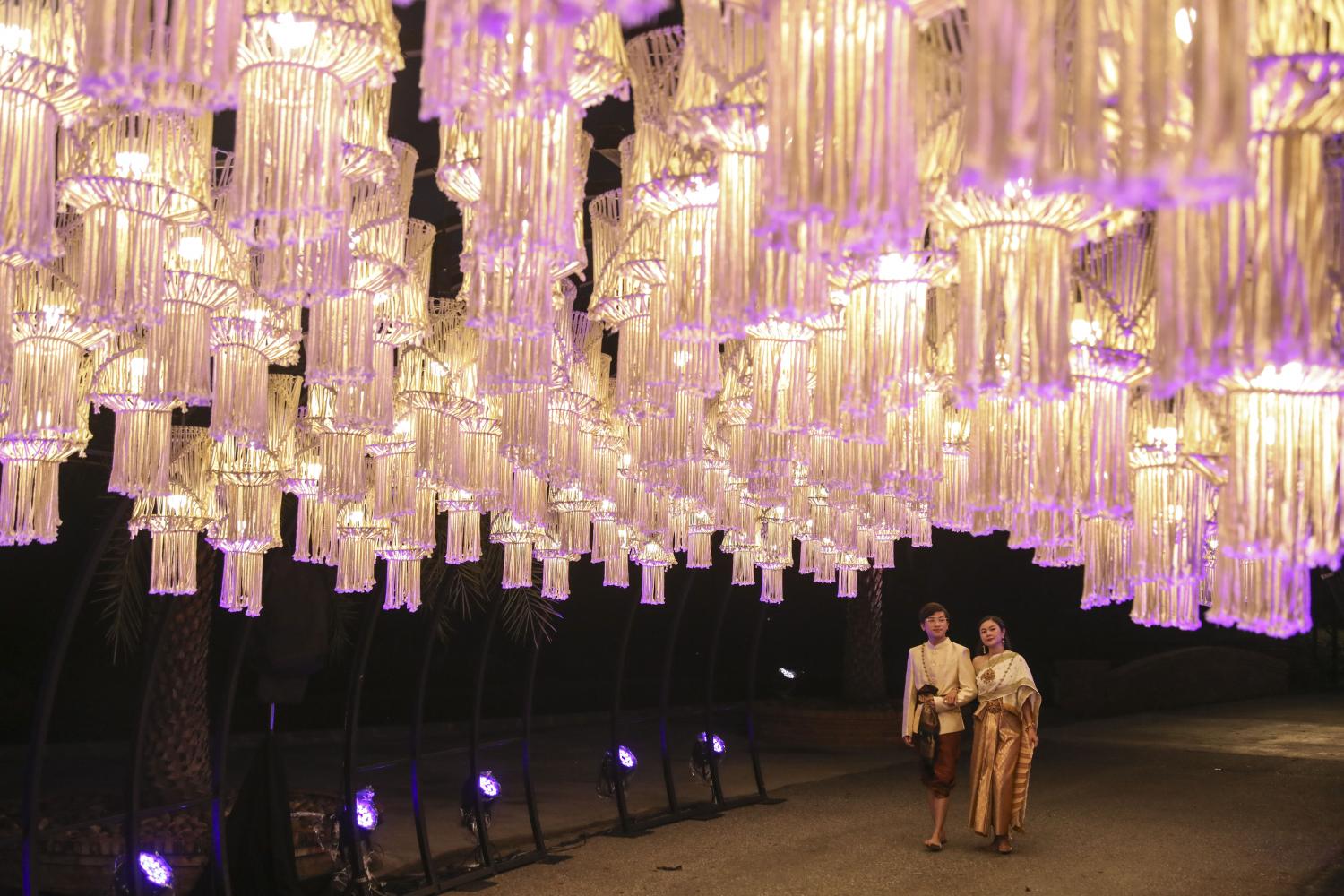 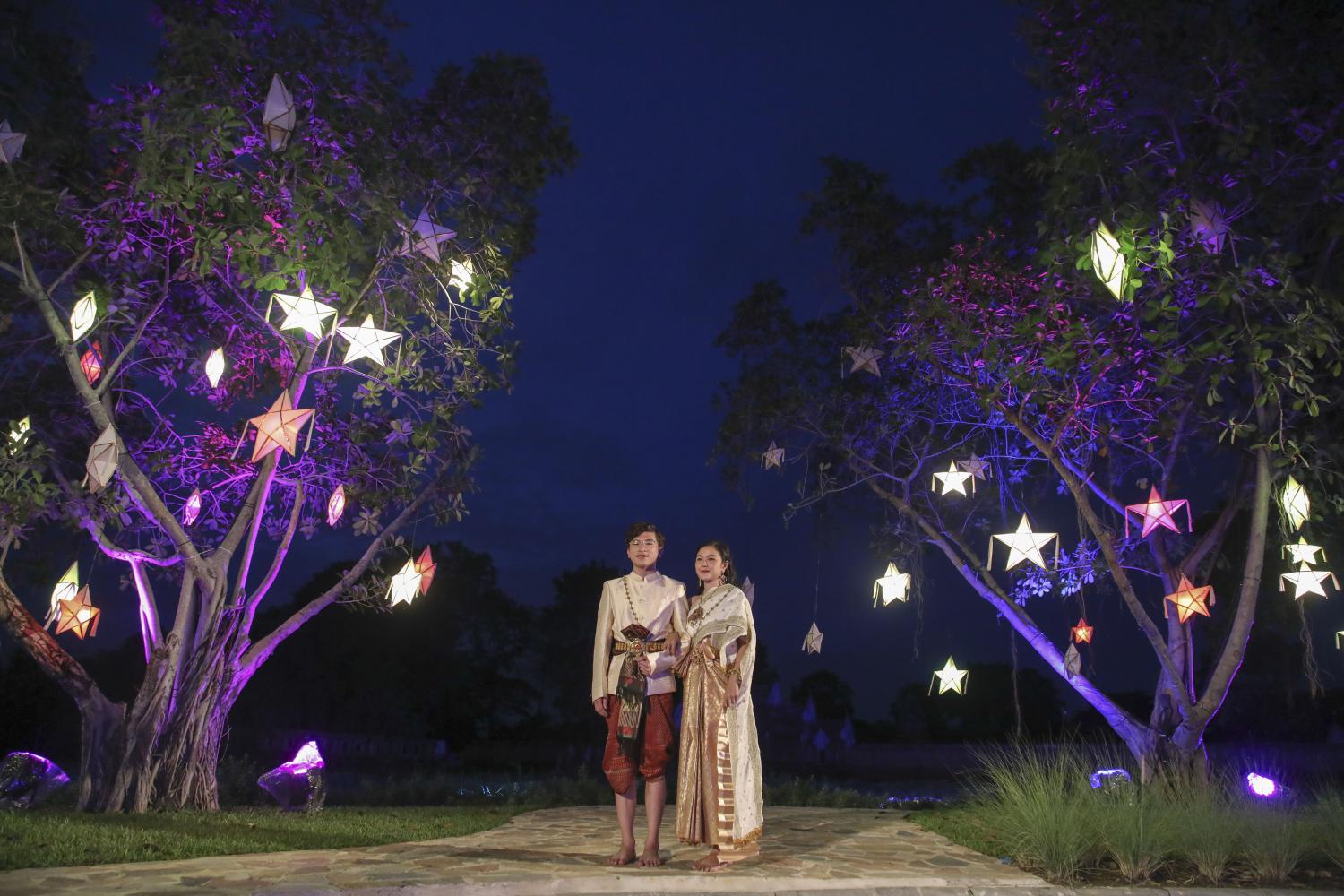 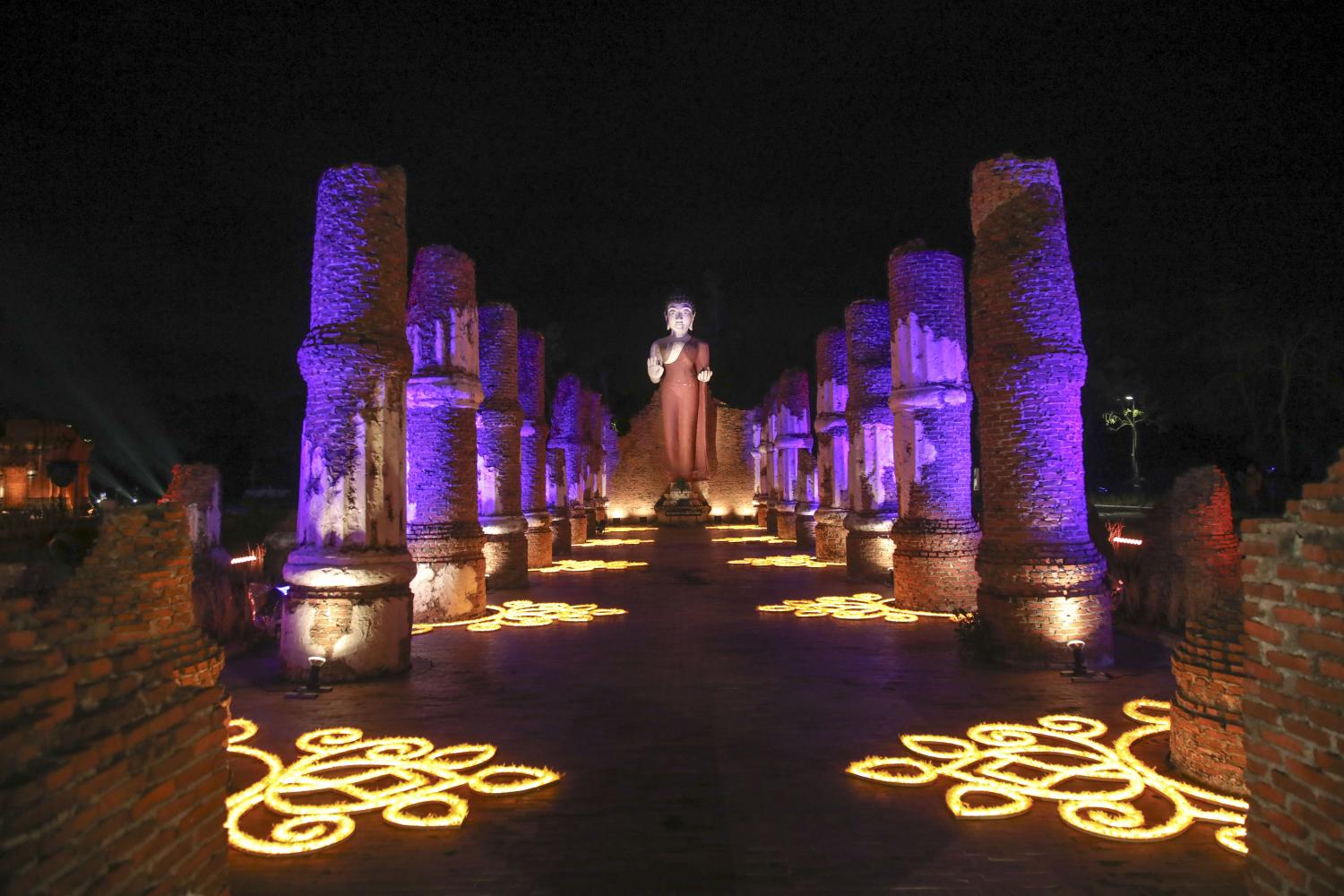 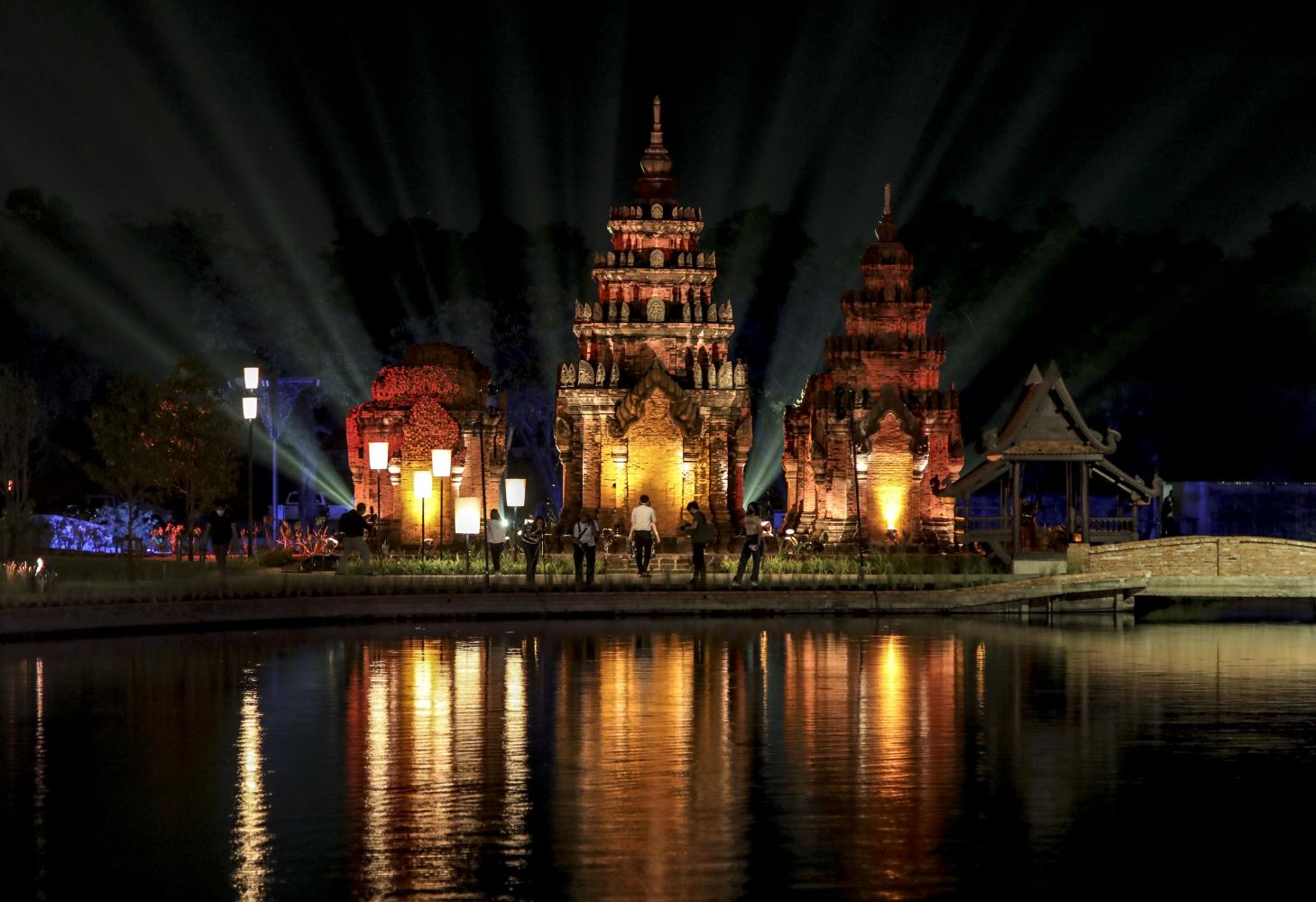 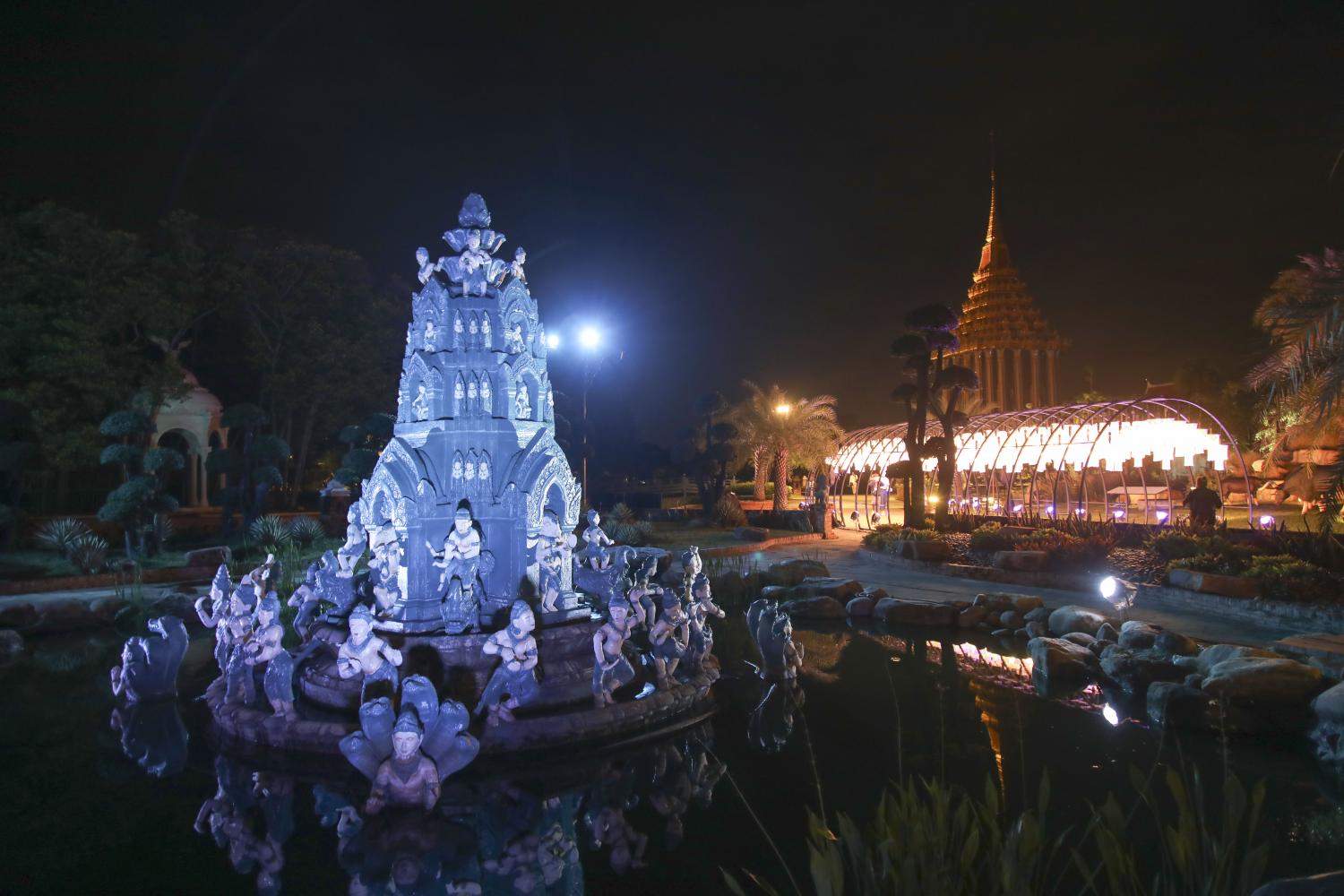