On a sunny day, I spent about 50 minutes riding the Airport Rail Link and taking advantage of the extension of the MRT Purple Line to travel from Bangkok's eastern suburb to the old town of Nonthaburi in the northwest.

Sitting on the banks of the Chao Phraya River, the old town has been bordered with a thread of lush orchards, colourful flower gardens and historic temples that mirror the ways of waterside communities that have existed since the Ayutthaya period.

It's like having a private trip when a train is empty during the day, yet good for passengers to maintain social distance. My sight-seeing tour began with a songthaew ride to Wat Chaloem Phrakiat Worawihan, which is located about 5km away from the MRT Yaek Nonthaburi 1 station.

Shady and greenish with a row of towering trees and local plants, it lies on the banks of the Chao Phraya and visitors can still see strains of flooding at its pier and in other spots. To pay honour to his family, King Rama III constructed this temple in 1847 on a plot of land that had previously been a residence of his grandparents and Princess Mother Somdej Phra Sri Sulalai. 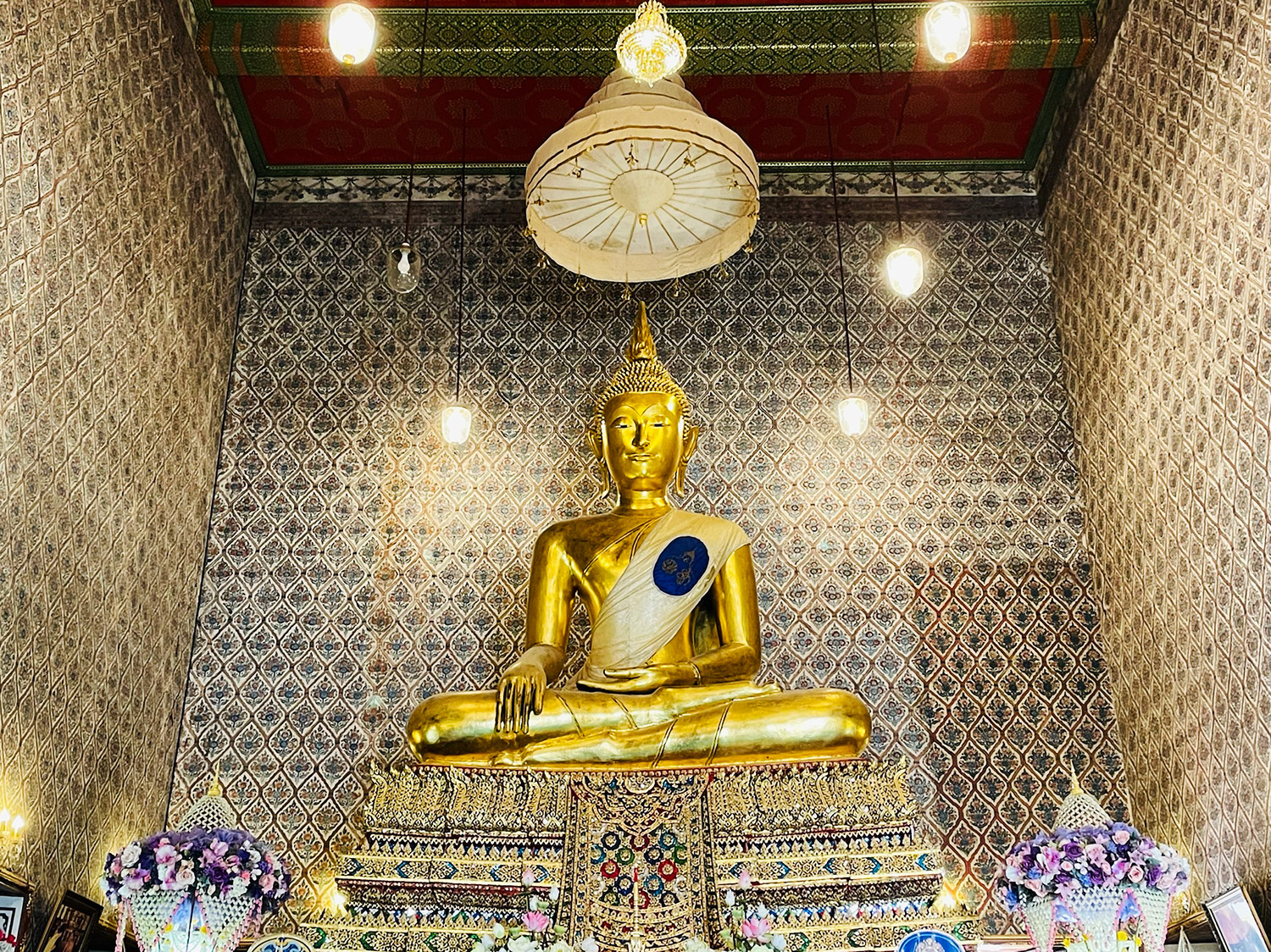 A statue of Phra Buddha Maha Lokaphinanthapatima in the ordination hall of Wat Chaloem Phrakiat Worawihan. 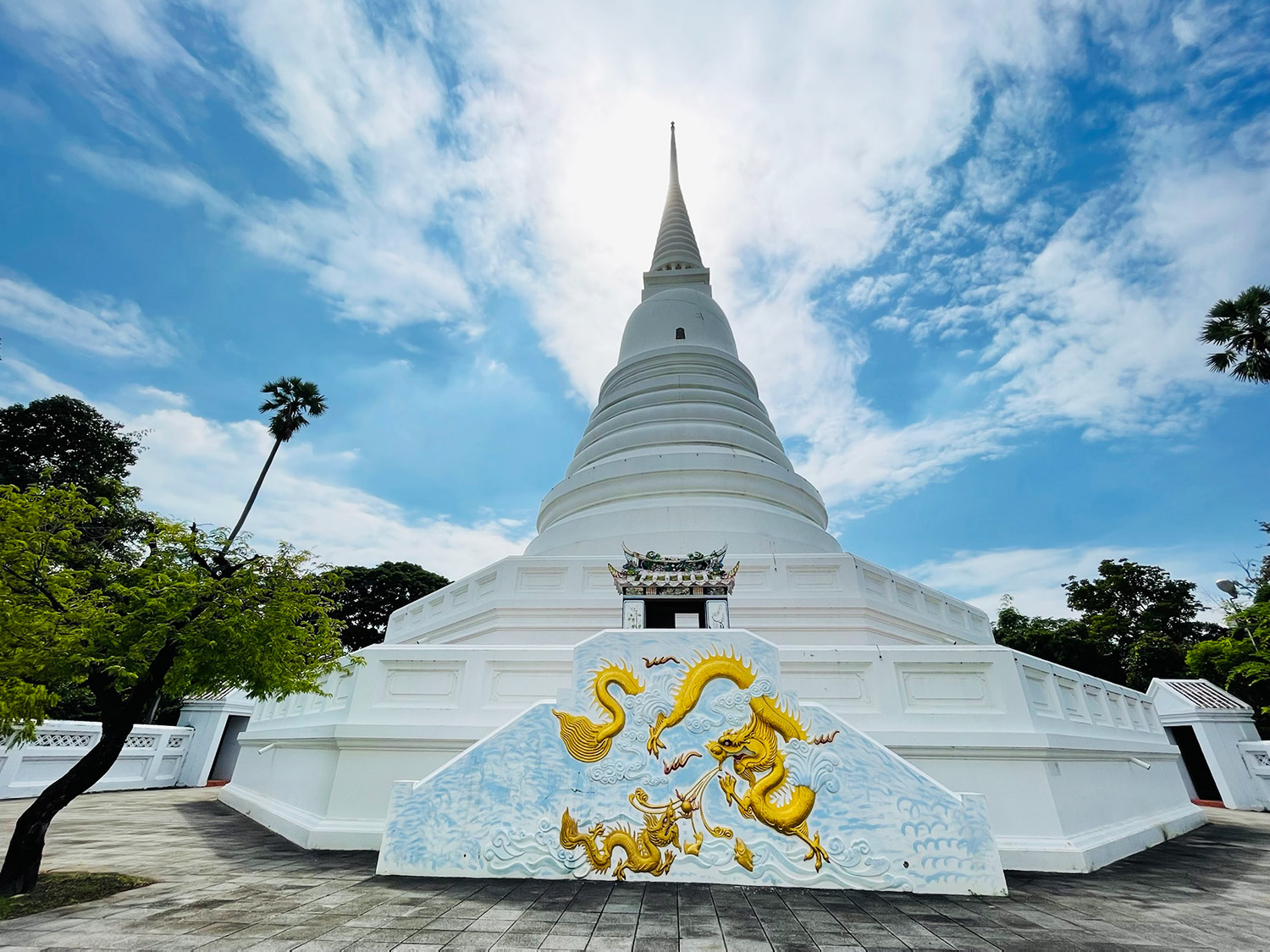 Completed during the reign of King Rama IV, it's enclosed by walls that resemble those of the Grand Palace with turrets on four sides adding a majestic touch to the location, which was originally the site of historic fortresses. In the past, some of the Chao Phraya's water around this area was utilised in various holy royal ceremonies.

This monastery is famous for its stunning Thai-Chinese architecture, while the ordination hall boasts gables adorned with vibrant cotton rose-inspired ceramic tiles from China. Inside, it houses a gold statue of Phra Buddha Maha Lokaphinanthapatima, and the walls are covered with pastel-shaded floral motifs that look simple yet elegant, showcasing top-class Thai craftsmanship.

Aiming to support Buddhism, it was the brainchild of King Rama III to mine copper in Nakhon Ratchasima for the creation of two Buddha statues to be installed at Wat Chaloem Phrakiat Worawihan and Wat Ratchanatdaram as well as other 34 Buddha images in different postures.

Behind the ubosot, a 48m-tall, white spherical pagoda stands on a Lanka-style lotus-shaped base that contain Buddha's relics. At a neighbouring vihara, visitors can pay respect to the white stone sculpture of Phra Sila Khao, which sits on a carved wood throne furnished with coloured mirrors, and admire a classic dhamma cabinet. 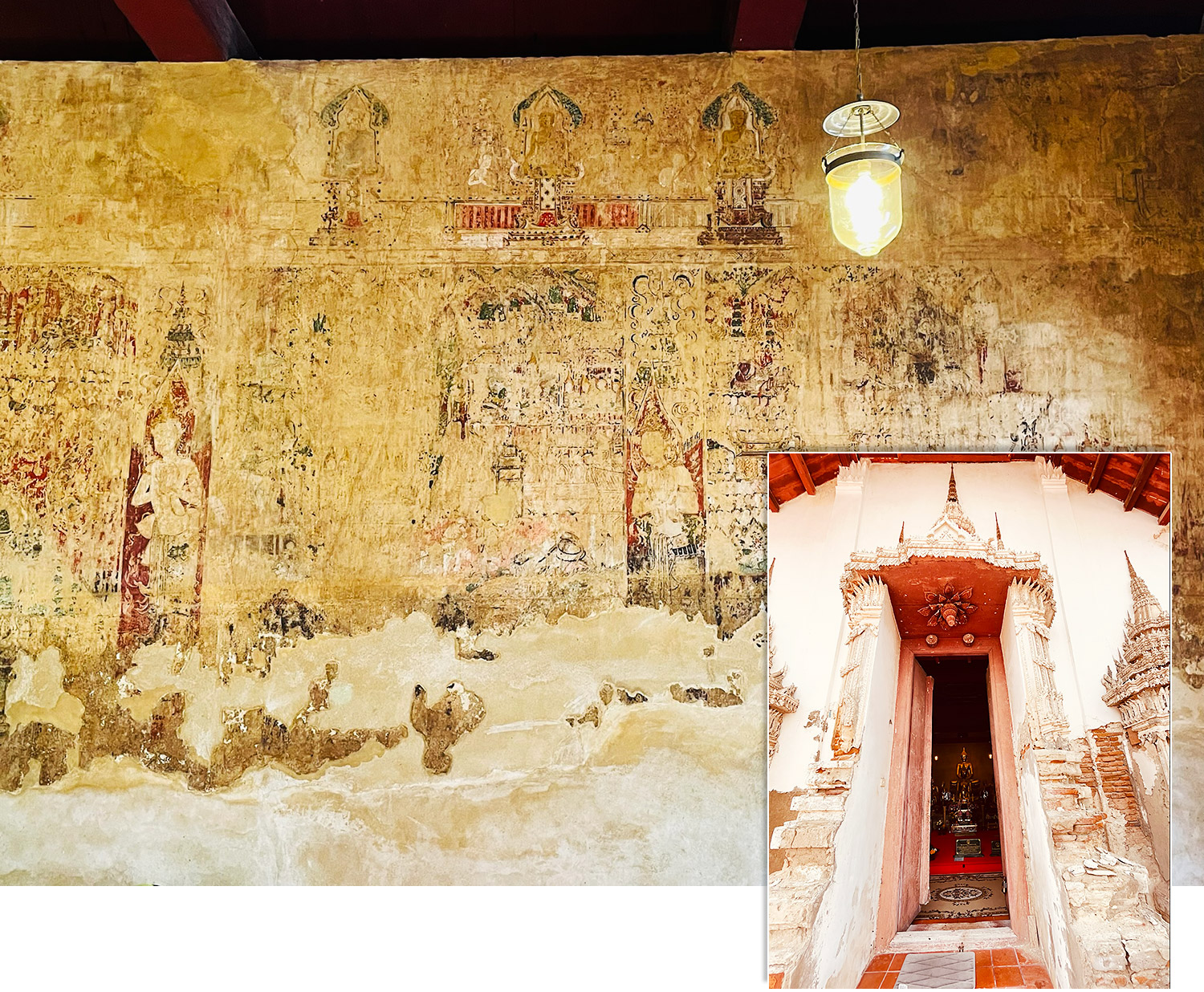 Wat Prasat was erected in the late Ayutthaya period. Murals at the temple’s ubosot depict the Ten Birth Tales of the Buddha and the way of life in the Ayutthaya era. 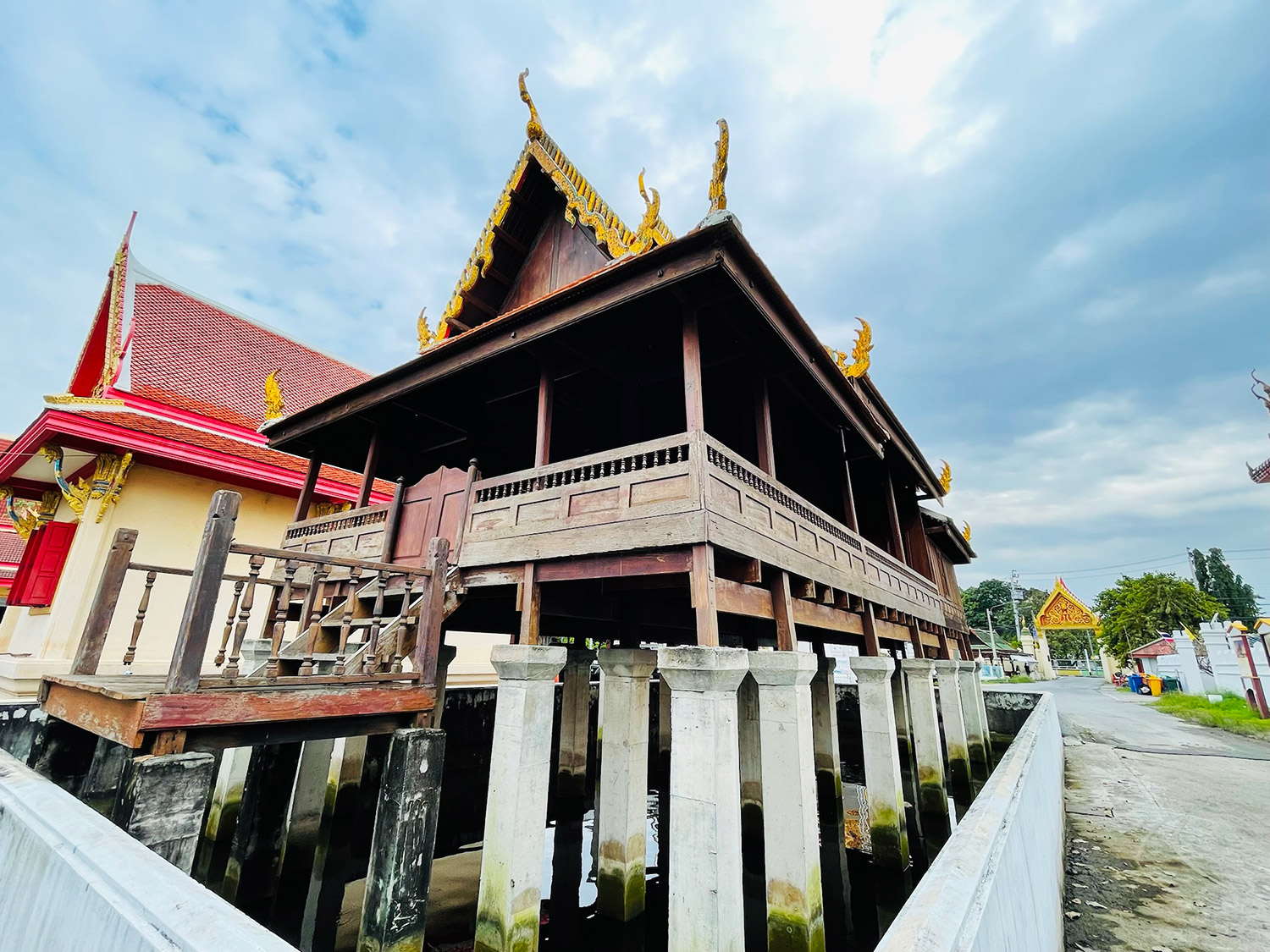 On the other side, the chapel has a Phra Buddha Patima Chaiwat statue, and a wall of murals depicting falling flowers and window panels with lotus, birds and aquatic creatures. By the river, a pavilion serves as a vantage point from which tourists can watch a unique view of the waterside community or purchase bread to feed fish.

A 5.5km drive from the MRT Bang Rak Yai station brought me to Wat Prasat, which is reminiscent of traditional Ayutthaya-style architecture. Located on the Bang Kruai-Sai Noi road, it welcomes visitors with a large open-air ground, home to replicas of Buddha statues from various renowned temples such as Phra Phuttha Sothon from Wat Sothonwararam Worawihan.

A colourful promenade with 100 vintage umbrellas leads us to the ancient ubosot, which was erected in the late Ayutthaya period and has been renovated multiple times. Its curved base is designed to resemble a junk and the carved wood gable depicts the god Narai riding a garuda capturing a naga.

Without windows, this ubosot has three doorways that show the original masonic structure, and in the middle is a principle Buddha statue surrounded with 25 sculptures of disciples, all of whom are seated in a meditation posture. 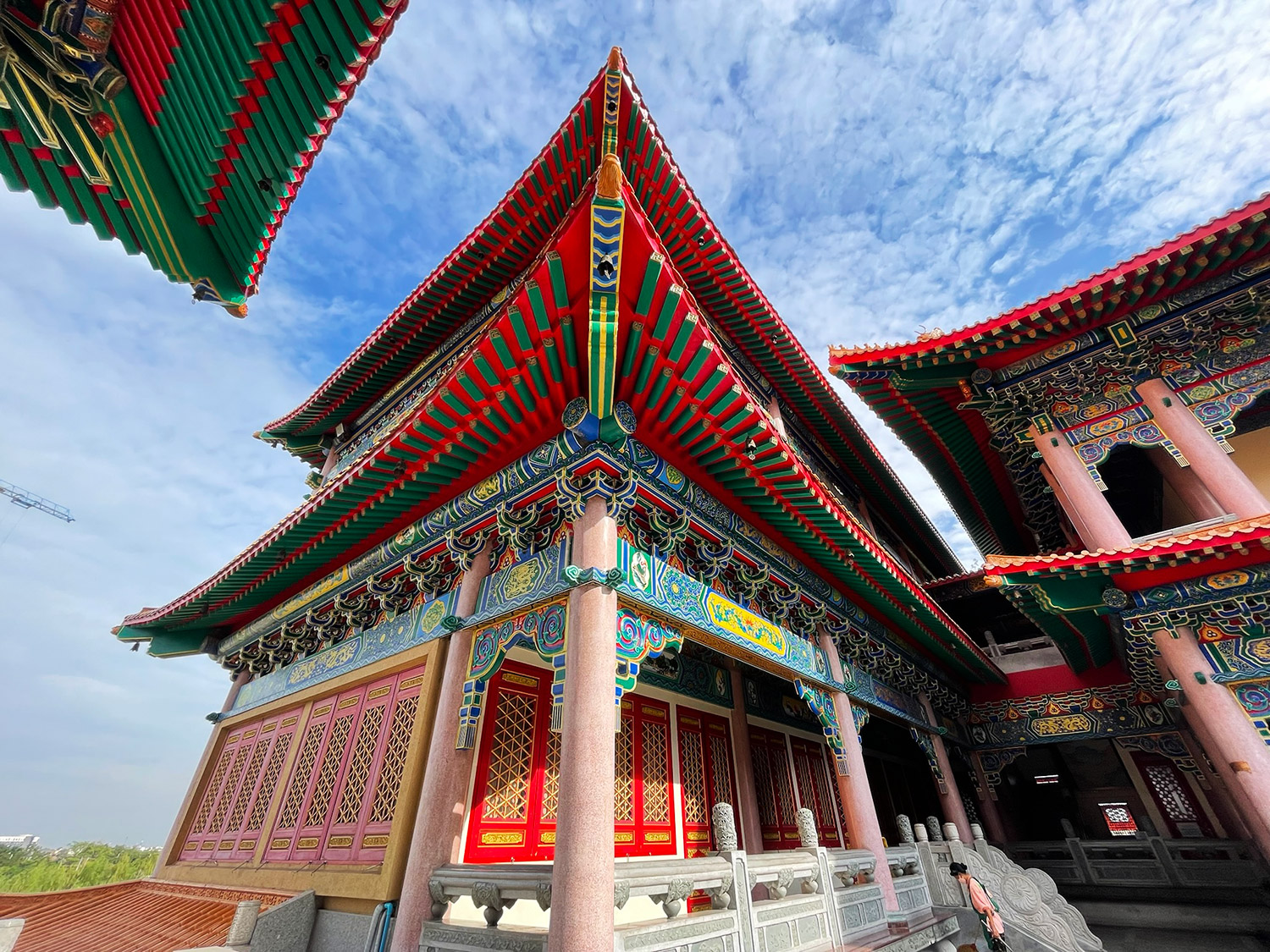 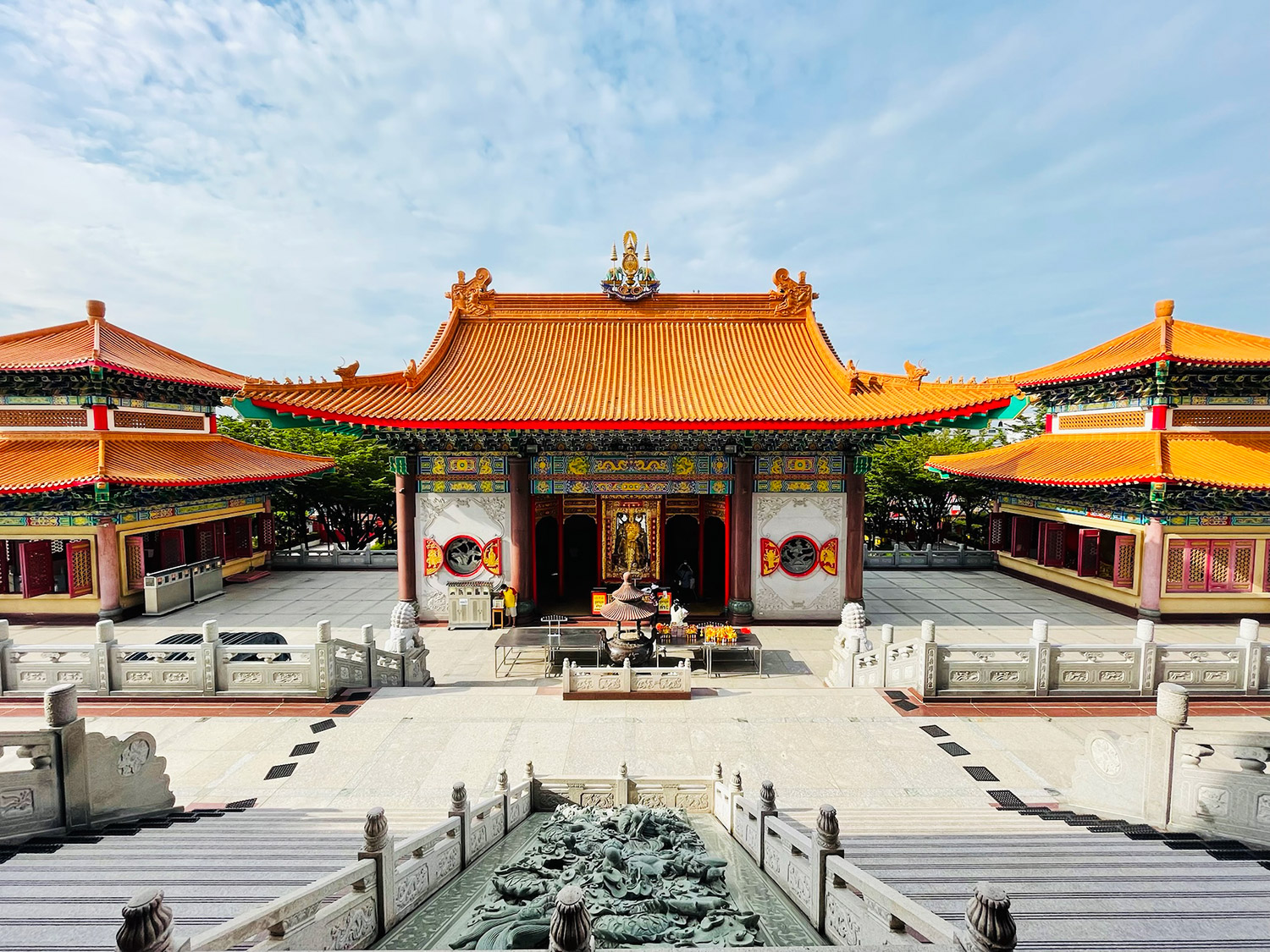 Wat Boromracha Kanchanapisek Anusorn was constructed to mark the 50th anniversary of King Bhumibol Adulyadej’s accession to the throne.

Using colour powder extracted from local plants and flowers, the walls are blanketed with fading murals to illustrate the Ten Birth Tales of the Buddha, angels listening to sermons, the way of life and other royal ceremonies like the royal procession to the temple in the Ayutthaya era.

A short stroll from the ubosot, the monastery compound also features a vihara of masters that is home to a figure of Luang Pho Son Thammasaro, the former abbot who specialised in superstitions, making his sacred amulets popular with local collectors and pilgrims.

Visitors are allowed to explore a pair of Panya-style gold teak houses constructed during the reign of King Rama V when Western civilisation spread to Siam, as well as a wood tripitaka hall, which was built in 1997 in the middle of a pond.

MRT Khlong Bang Phlu is the next stop after Bang Rak Yai. It's a 4.8km drive to Wat Boromracha Kanchanapisek Anusorn, Nonthaburi's most popular destination for Thai-Chinese descendants to pray for luck, wealth and protection.

To celebrate the 50th anniversary of King Bhumibol Adulyadej's accession to the throne, Thai-Chinese Buddhists contributed funds to build this Chinese monastery in 1996 as a branch of Wat Mangkorn Kamalawat in Chinatown.

Locally known as Wat Leng Noei Yi 2, the construction took 12 years and was given its name by King Bhumibol. Occupying 12 rai, it is inspired by Beijing's Forbidden City in order to highlight beautiful Chinese architecture from the Ming dynasty, while the layout is based on Mahayana principles.

On the ground floor, the ceiling is adorned with red lanterns and the counters are selling some offerings and amulets in various styles. Climbing up to the 2nd floor, it's home to a drum tower and a bell tower, where visitors are allowed to write their names on a red ribbon and hang it on a large bell to ask for fame and success.

In the middle, Tian Wang's Sanctuary boasts a green ceiling with dragons and several statues of Chinese deities such as Katyayana, the Sun god, the goddess of the Moon, the Great Emperor of the North Pole and Tudi Gong.

Those born in the Year of the Ox, Big Snake and Dog gather at the foot of a massive stone stairway and ask Tai Sui, the god of destiny, for protection. Upstairs, the Meun Buddhasukkavadi Hall is home to a trio of soaring Buddha statues -- Amitabha (the Buddha of eternal life), Phra Sri Sakyamuni and Phra Bhaisajyaguru Vaitoonprapha (the medicine Buddha) as well as a row of gold and crimson statues of their followers.

Walking through a marble-like cloister to the Avalokiteshvara Guan Yin Hall, visitors can pray for good health and prosperity in front of a beautiful carved wood sculpture of Guan Yin (goddess of compassion) with a thousand hands. The compound also has the meditation hall, Phra Pariyat Tham School and a lush expansive courtyard with a Chinese-style pavilion and a lifelike, marble-like Guan Yin figure. 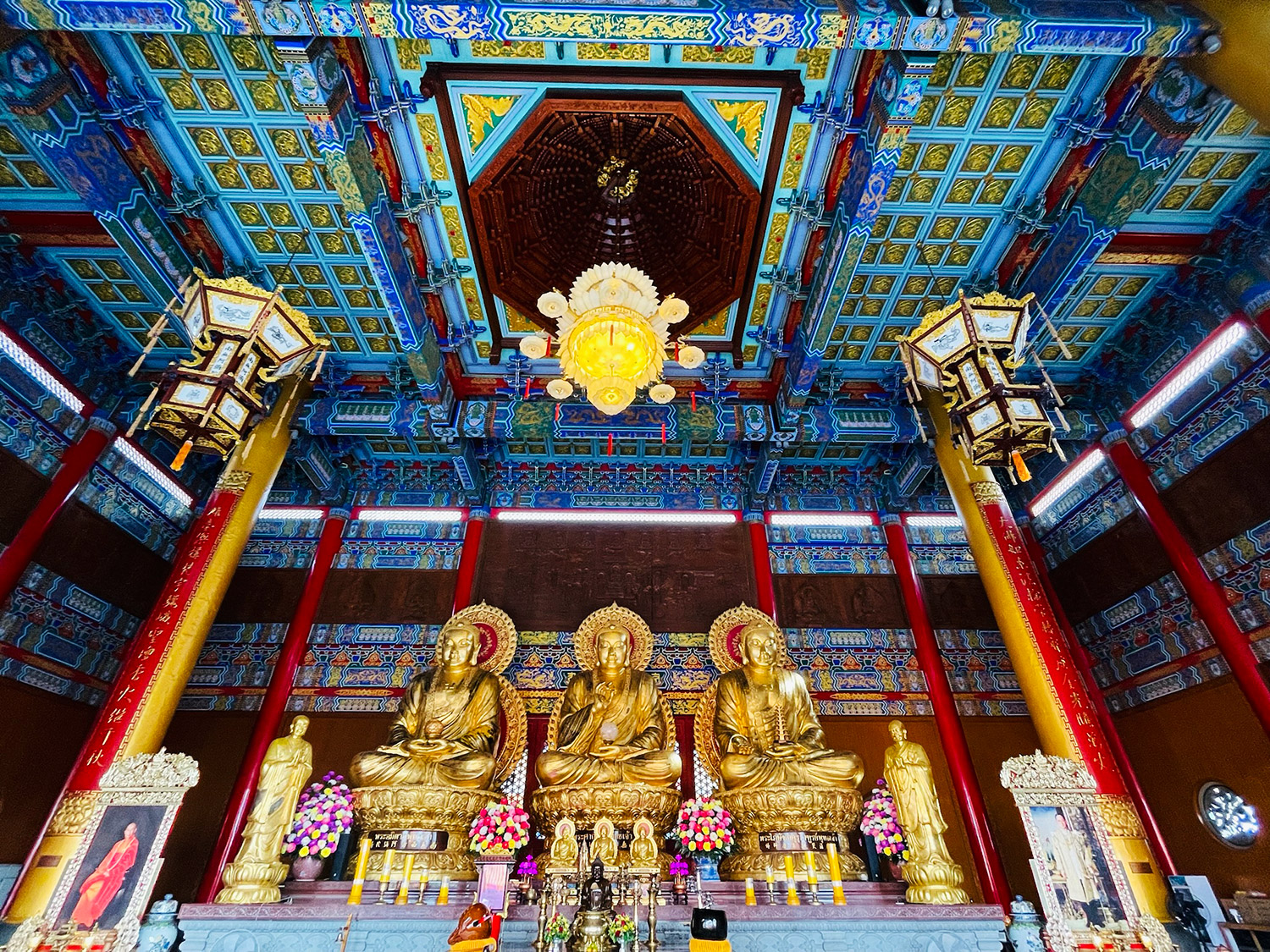 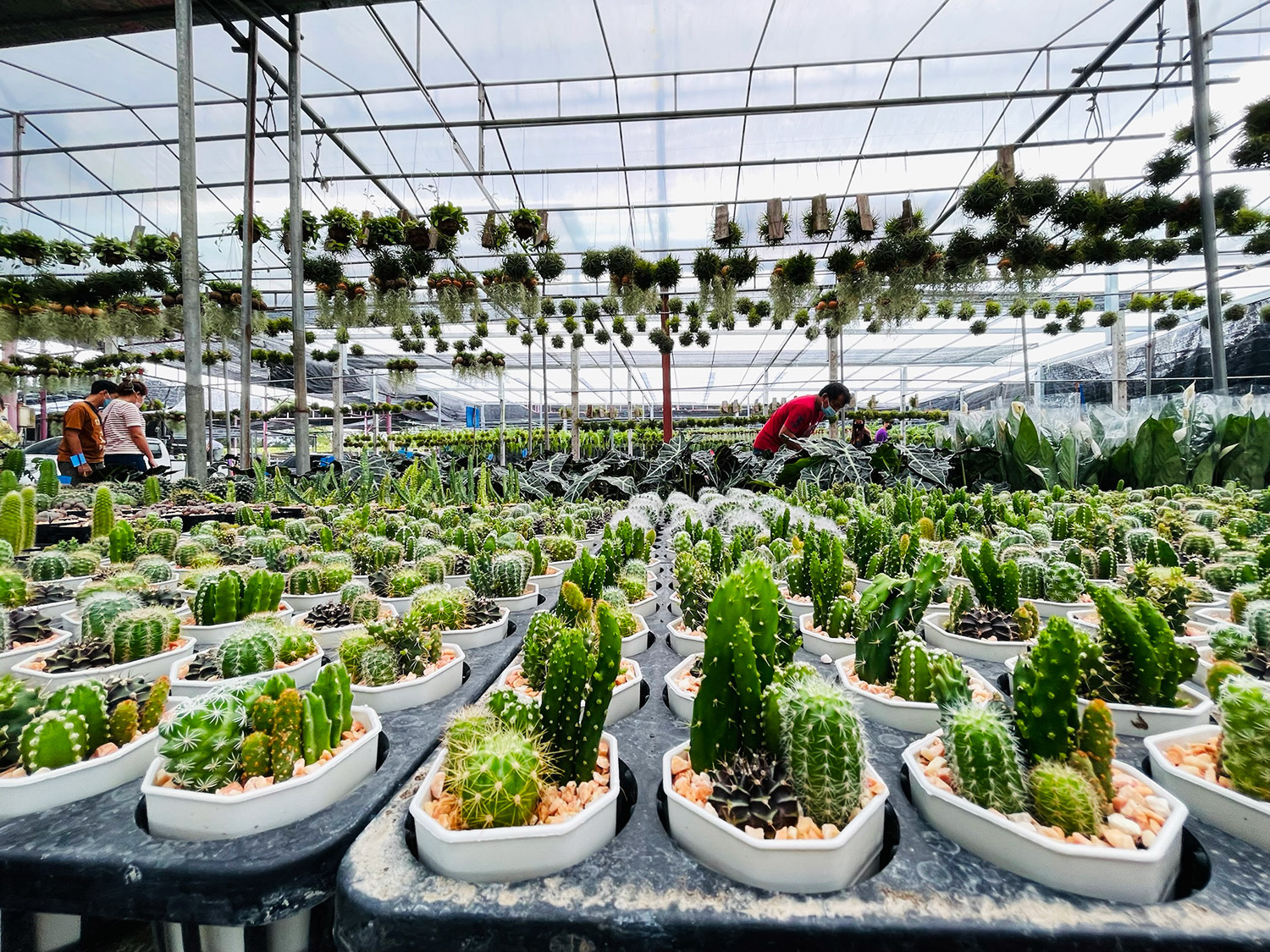 The Phra Ngoen Plant Market is one of the largest in Bang Yai district.

Just a few stops from MRT Bang Phlu to MRT Talat Bang Yai, then it's a 7km journey to Wat Phra Ngoen, which is situated on Bang Muang-Bang Kulad road. It was built in 1821 and houses an antique wood tripitaka hall with a two-layered roof and a glass gable, which stands in the middle of a pond.

Not far from the temple, the Phra Ngoen Plant Market is a good place to take a break and find some keepsakes for home. This is one of the largest markets in Bang Yai district, with more than 100 vendors offering a variety of gardening supplies, plants and flowers such as croton, fern, orchid, caladium and alocasia.

If you want something for dinner, the food court lures people with a variety of popular local and international dishes as well as sweets. Charcoal Thai crispy pancake, sticky rice with mango, fried squid eggs, spicy coconut salad, seafood salad and barbecue buffets are among the highlights.