published : 6 Jan 2022 at 04:00
newspaper section: Life
writer: Pattarawadee Saengmanee
From October to January, the Chon Sandet district is blanketed in a sea of sunflowers.

When the winter gusts come in, an extensive gold carpet of blossoming sunflowers cover more than 1,000 rai plots of land in the ancient town of Lop Buri, set against a backdrop of mountains that kiss the Sun.

In recent years, this has become a powerful magnet, drawing thousands of tourists to indulge in the beauty of nature, while its historical structures evoking Dvaravati and Khmer influences transport visitors back to the days when Lop Buri served as the Ayutthaya kingdom's second capital during the reign of King Narai the Great.

Late in the morning, I arrived in tambon Chon Sandet after a 56km drive northwest from downtown Lop Buri, weaving through corn, millet and cassava plantations, which are currently being replaced by a large field of sunflowers from October to January.

Following the fundamental principle of crop rotation, local farms plant sunflowers after harvesting corn because they require less water and flourish in a chilly climate. The flowers take 60 days to mature and can endure up to two weeks after they bloom.

Some seeds are roasted for sale, while factories utilise them to make sunflower oil for cooking, and the stalks can be fed to animals. Local farmers allow tourists to stop and take pictures for free when their lands turn yellow. This becomes an offshoot to help promote tourism in their communities during the winter season. 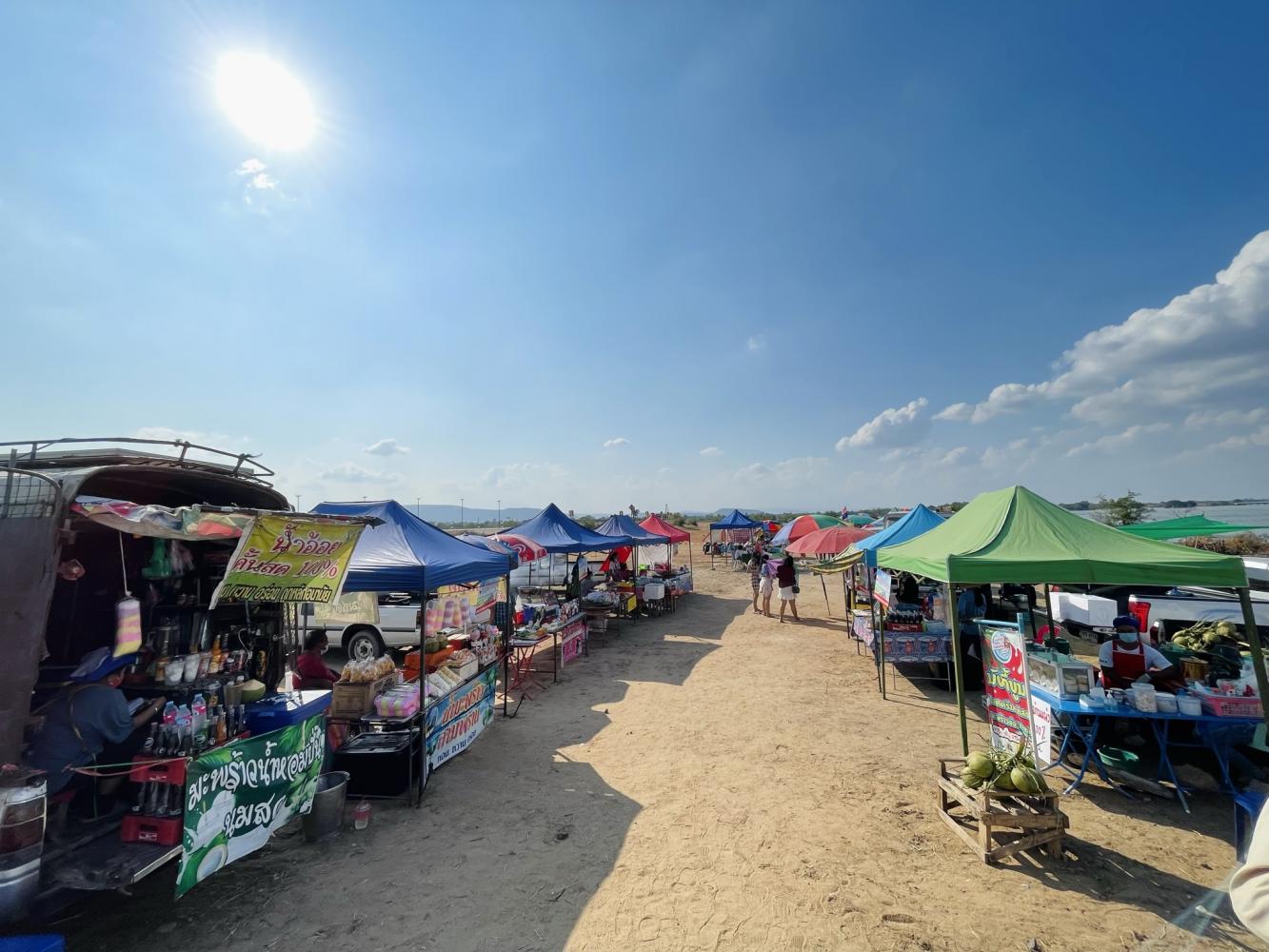 The railway bridge that runs through the Pa Sak Jolasid Dam is a new tourist attraction. 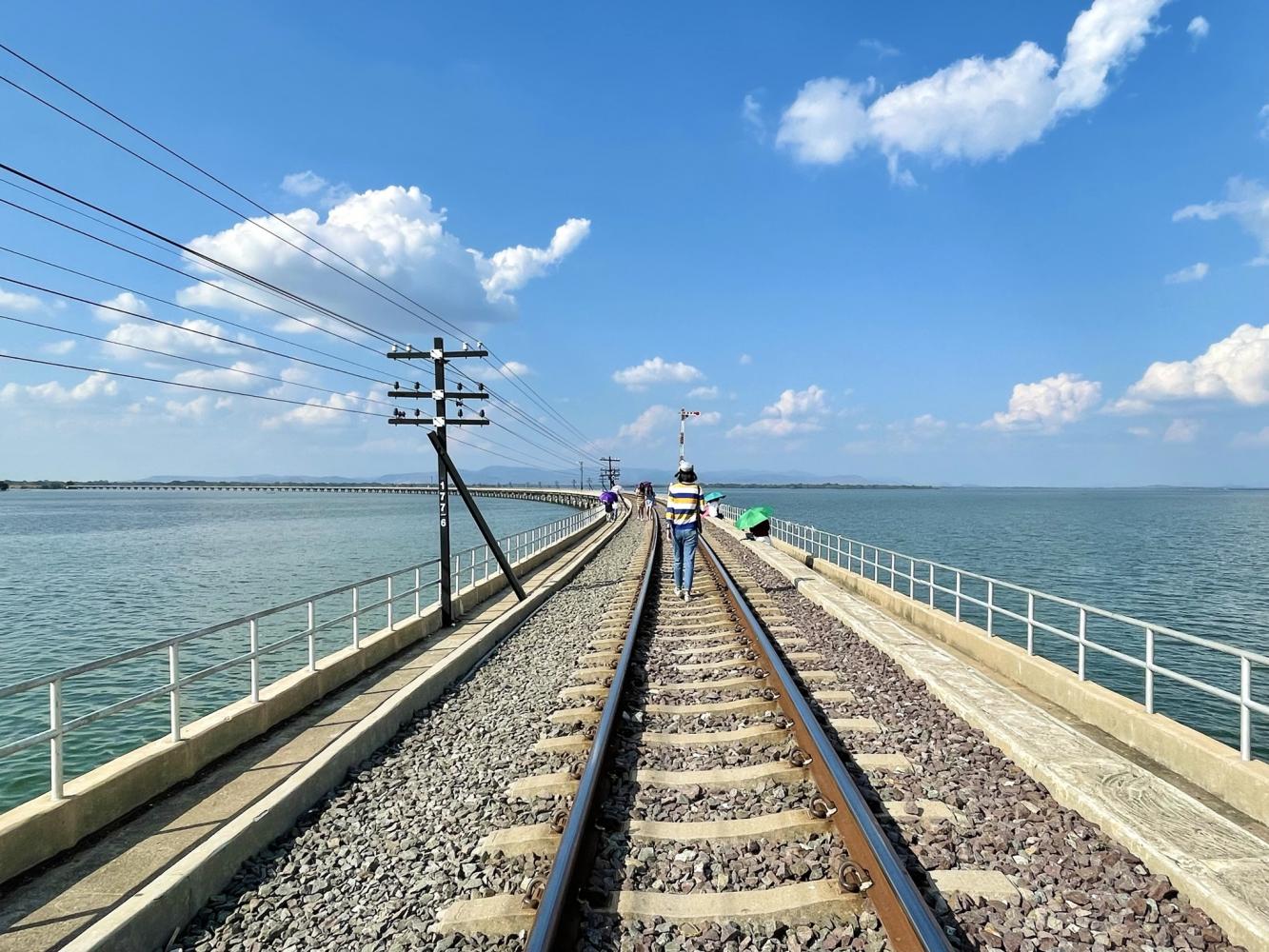 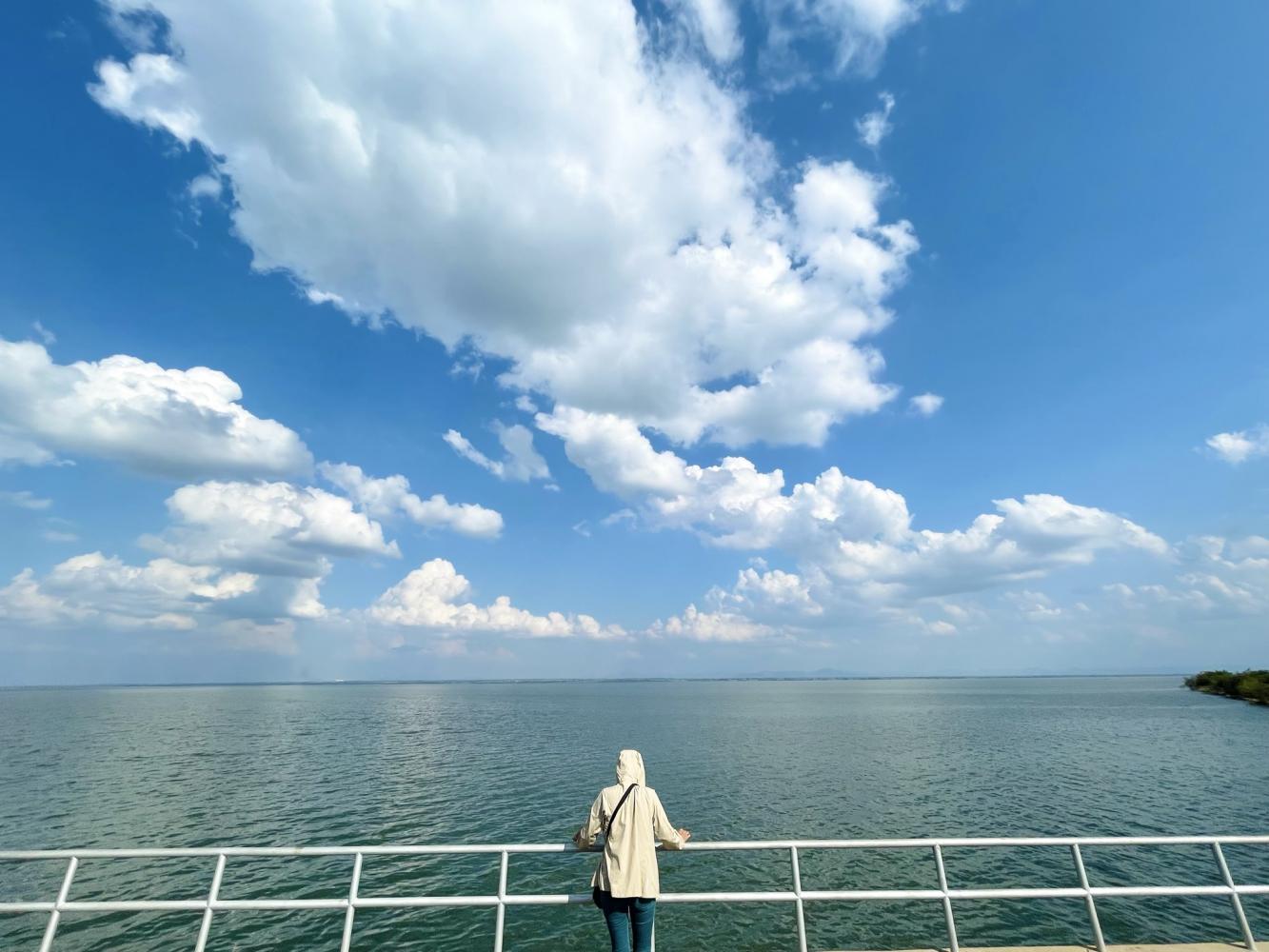 Leaving the sunflower field, I drove for an hour to the mountainous land in Phatthana Nikhom district, where I ascended to the peak of Khao Phraya Doen Thong. It's hidden in lush woodland and orchards, 6km from Saraburi-Lomsak road, so it was off the tourist map in the past.

The streets have been developed to make it more convenient for tourists. The Khao Phraya Doen Thong tambon administrative organisation is in charge of the mountain to ensure safety requirements to follow Covid-19 control measures. All visitors are required to register at the entrance before walking through a 300m sloped trail to the vantage point.

Shady with towering trees and plants, the sides of the trail are covered with limestone rocks and more than 20 local vendors put up booths to serve street cuisine, drip coffee, sweets and some snacks, while visitors are allowed to pitch a tent for an overnight stay.

Wat Nong Na built a dhamma campsite at the top, where a group of devout pilgrims dressed in white gather to practice meditation and learn how to go back to the basics and escape from the chaos of life.

The rocky land is a peaceful sanctuary, home to Buddha statues in different designs and a red naga-inspired stairway that serves as a guardian. A little further, visitors can worship the Luang Poh Hin shrine, Wat Nong Na's former abbot, who specialised in ancient Thai medicine and enchantment.

Alongside, a carved laterite-like arch was constructed as a mystical portal to convey us to heaven, while stone figures of deities and singha highlight the Hindu influence. This appears to be the best spot to watch the sunrise over the sea of mist and take in a spectacular view of the Pa Sak Jolasid Dam, or to stargaze at night.

Descending, I made my way to a lengthy railway bridge that runs through the dam. It has recently become a popular photo spot for young tourists to check in and act like they're in Japan, thanks to the winter winds and beautiful landscapes. 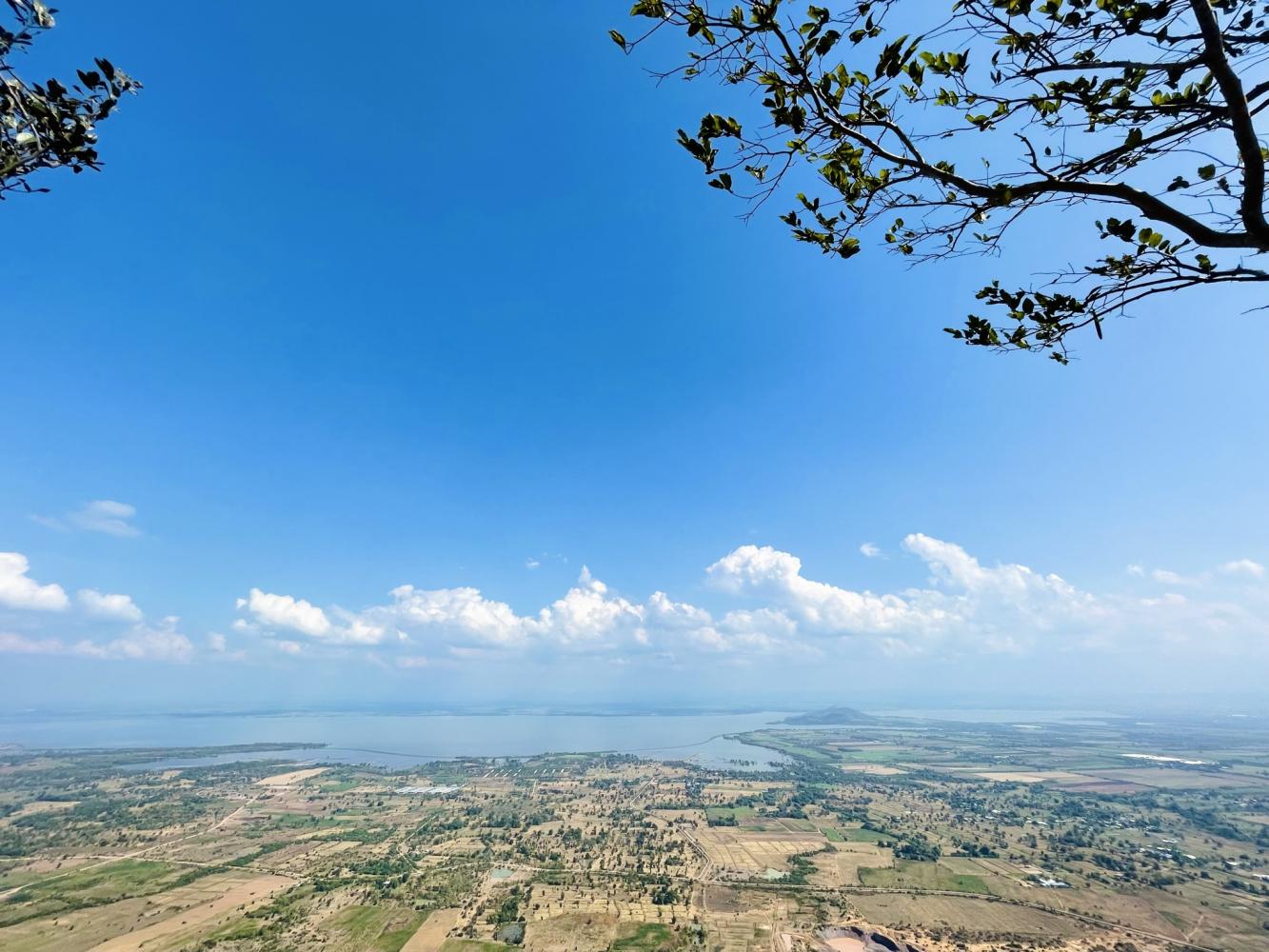 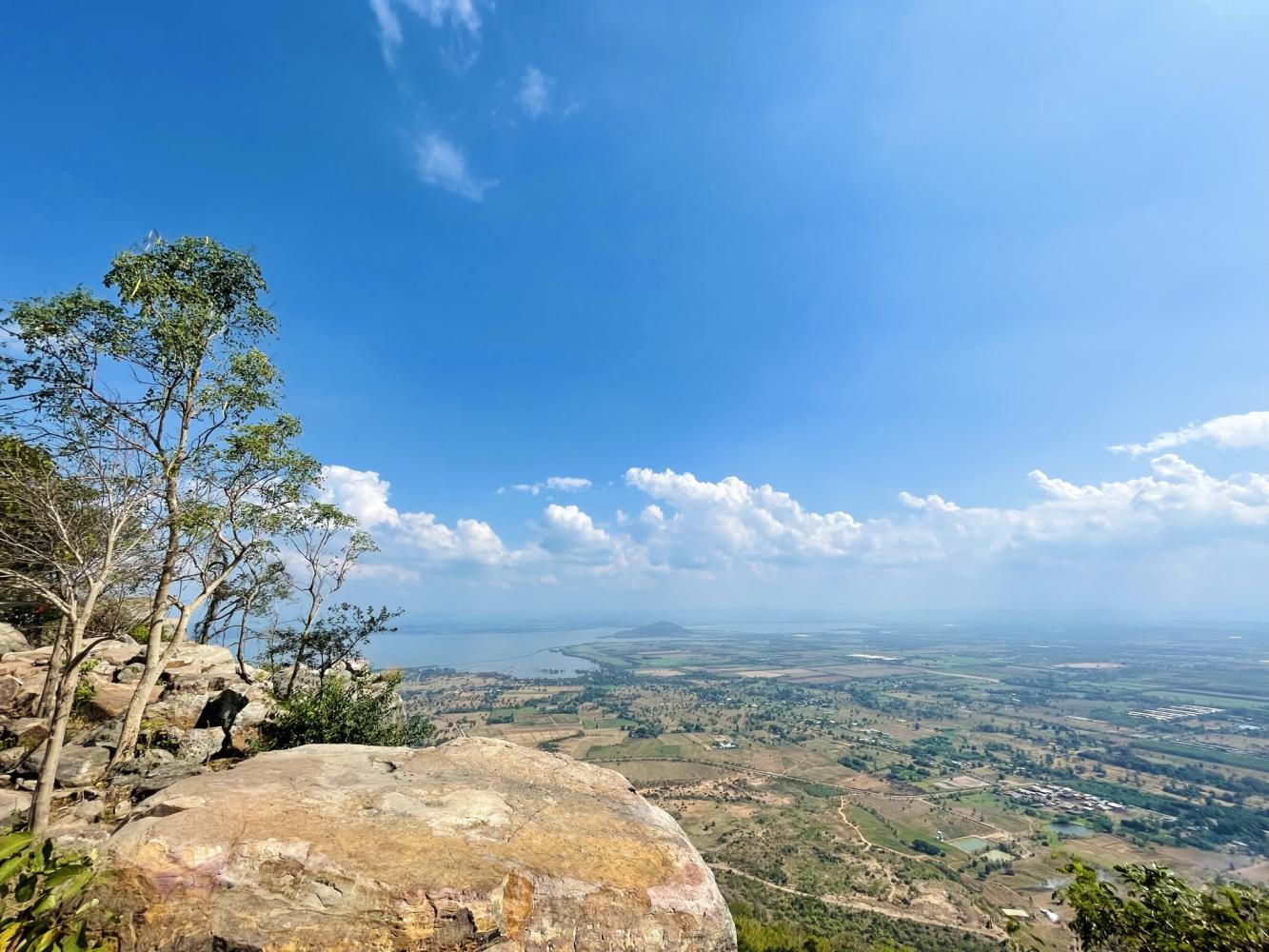 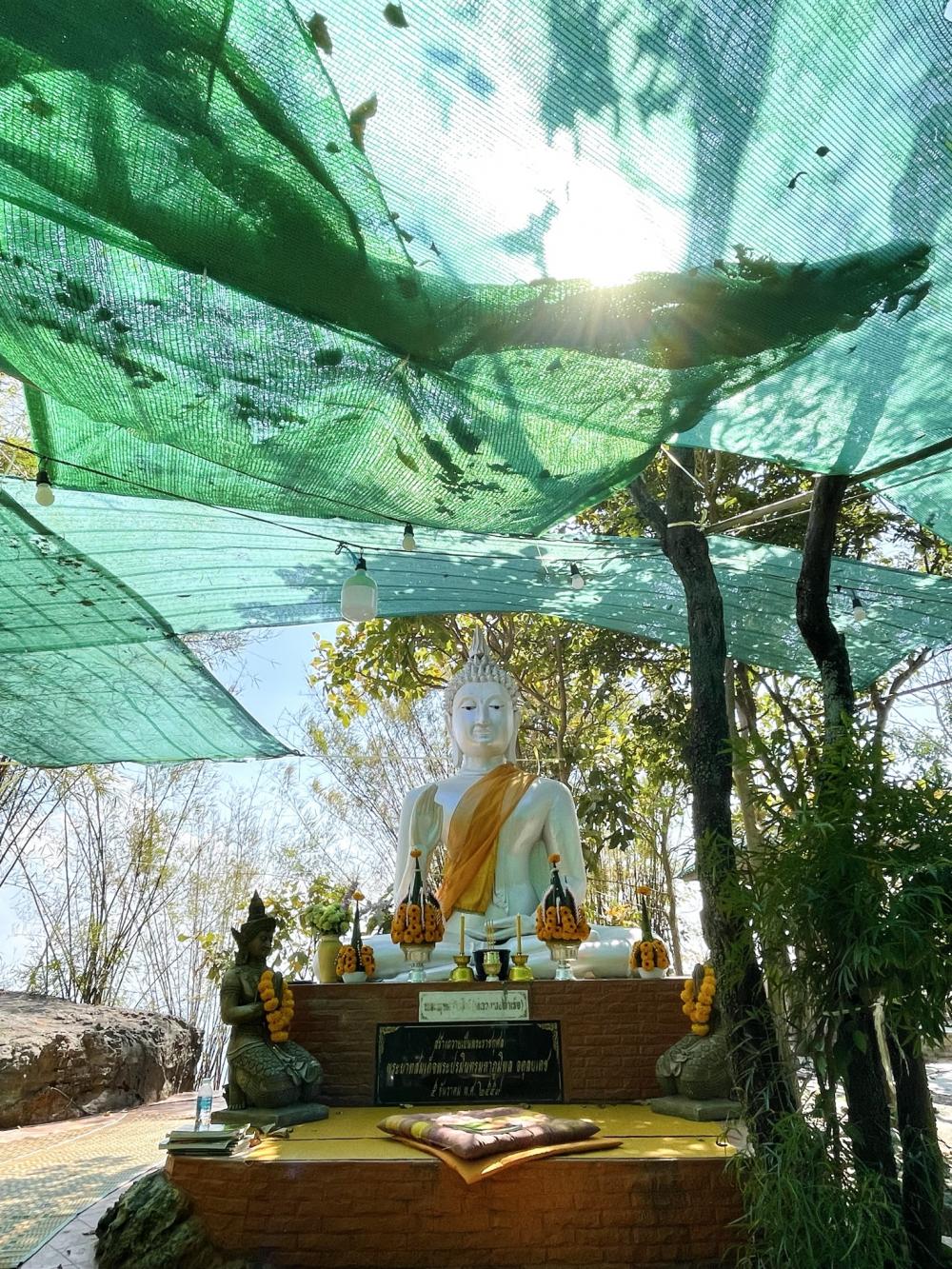 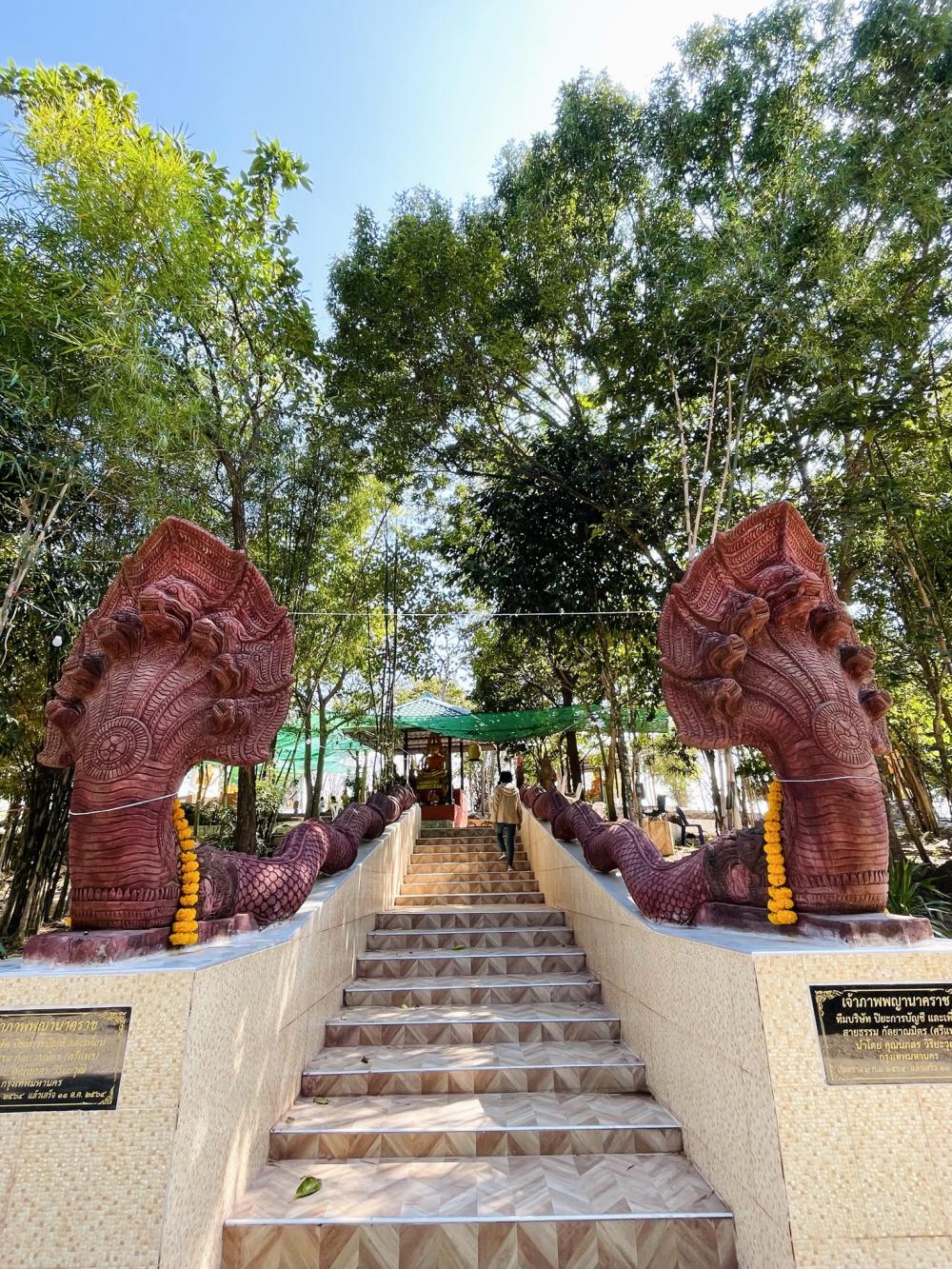 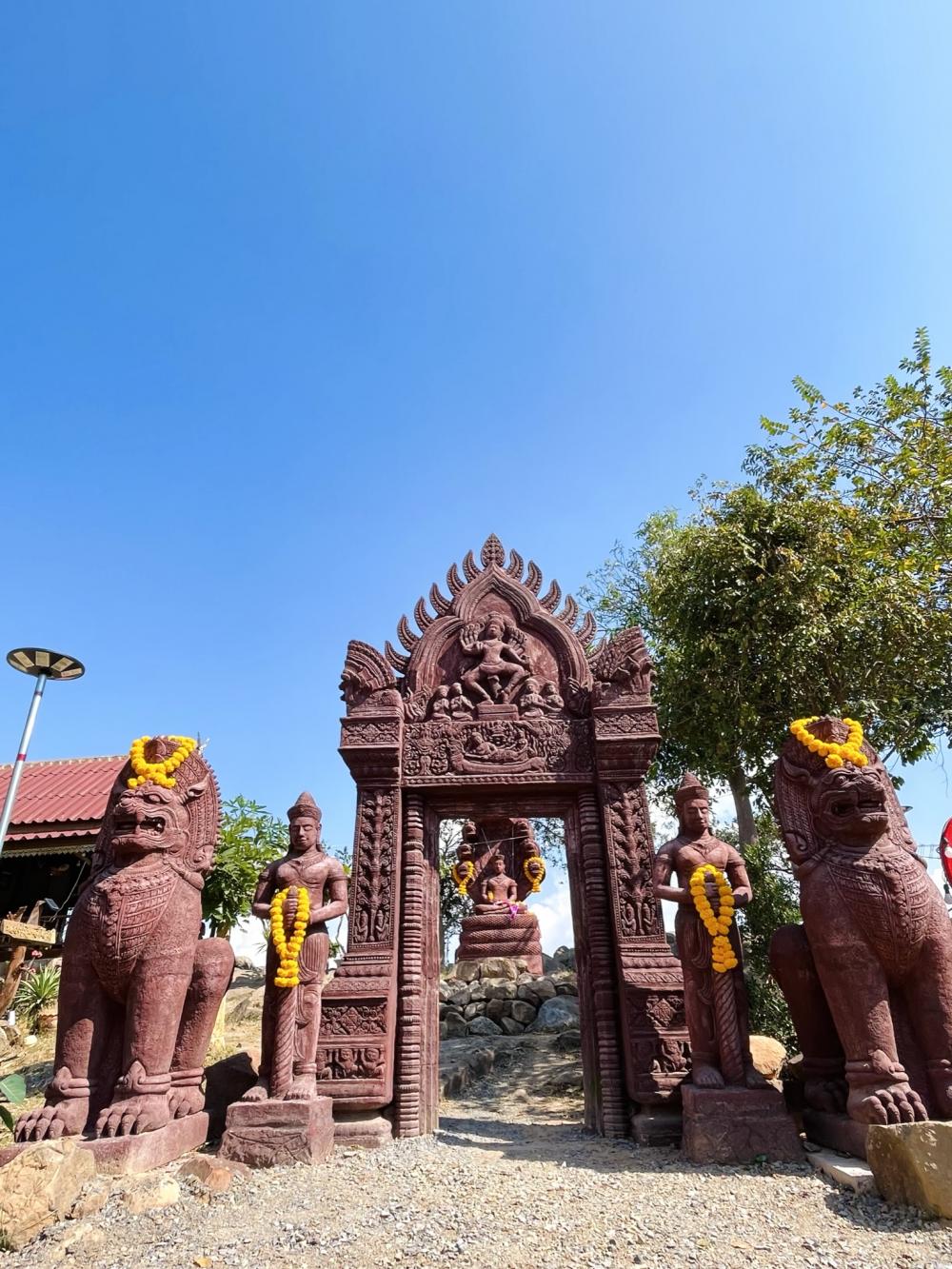 All visitors must have their temperature checked prior to entrance as part of disease control measures. A vast ground doubles as a parking lot and a mini shopping market, while local vendors sell a variety of street food, refreshing drinks and fresh fruits for light meals. Visitors can rent a collection of colourful umbrellas as a prop for fashion shoots, or lay down a picnic blanket during the day.

A train runs on a railroad at specific times throughout the day (6am, 7am, 4pm and 6pm), allowing tourists to take a pleasant stroll and witness the way of local life while villagers go fishing.

As part of King Bhumibol's Pa Sak River Basin Development Project, it was officially opened in 1999 as the largest reservoir in the Central Region to provide water to the plantations in the Pa Sak valley and lower Chao Phraya River.

This month, travellers can experience a happy-go-lucky ride when the State Railway of Thailand is offering a weekend schedule of day trips by special train from Bangkok to the Pa Sak Jolasid Dam to promote local tourism. Tickets range from 150 baht to 560 baht. 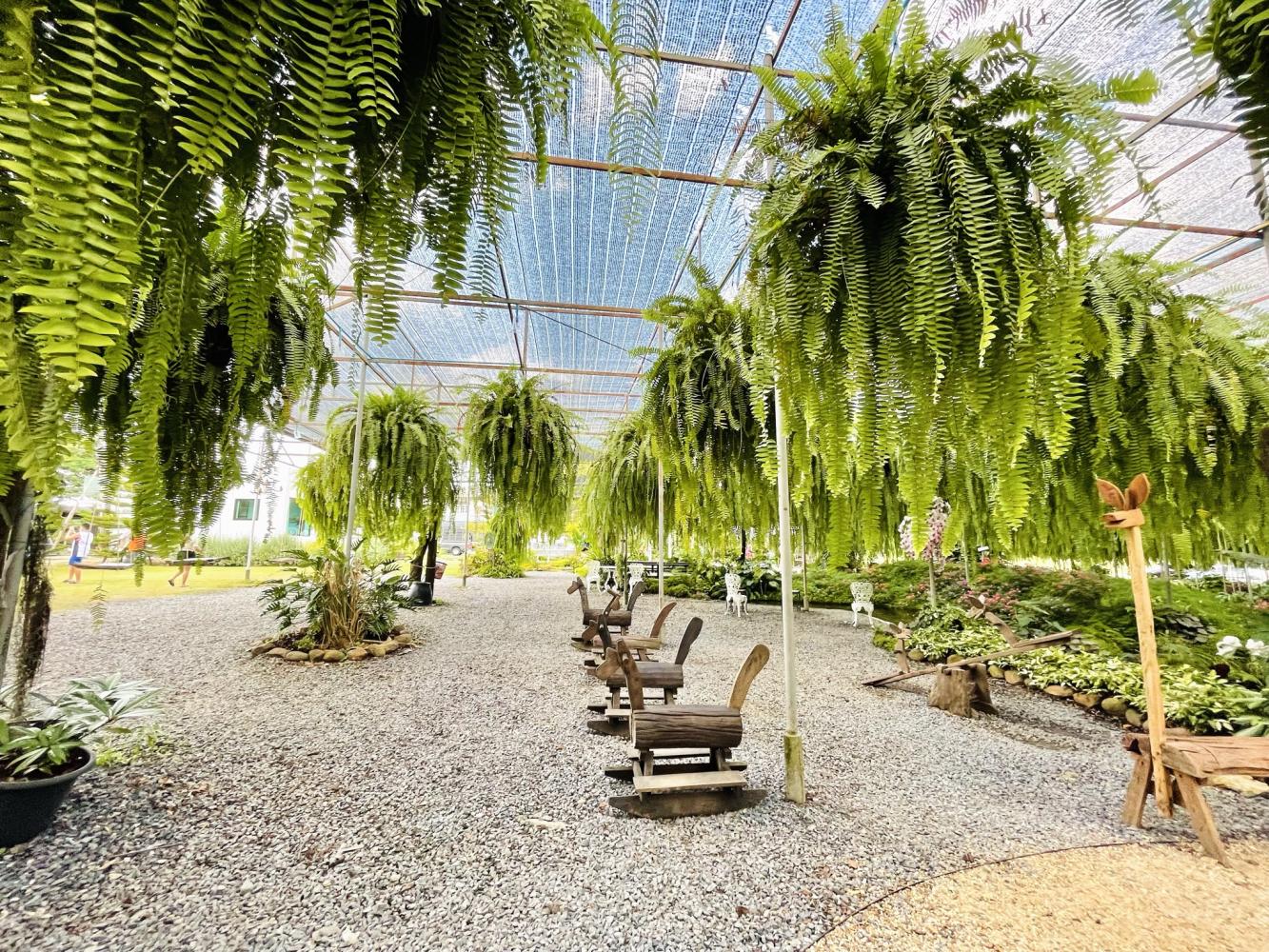 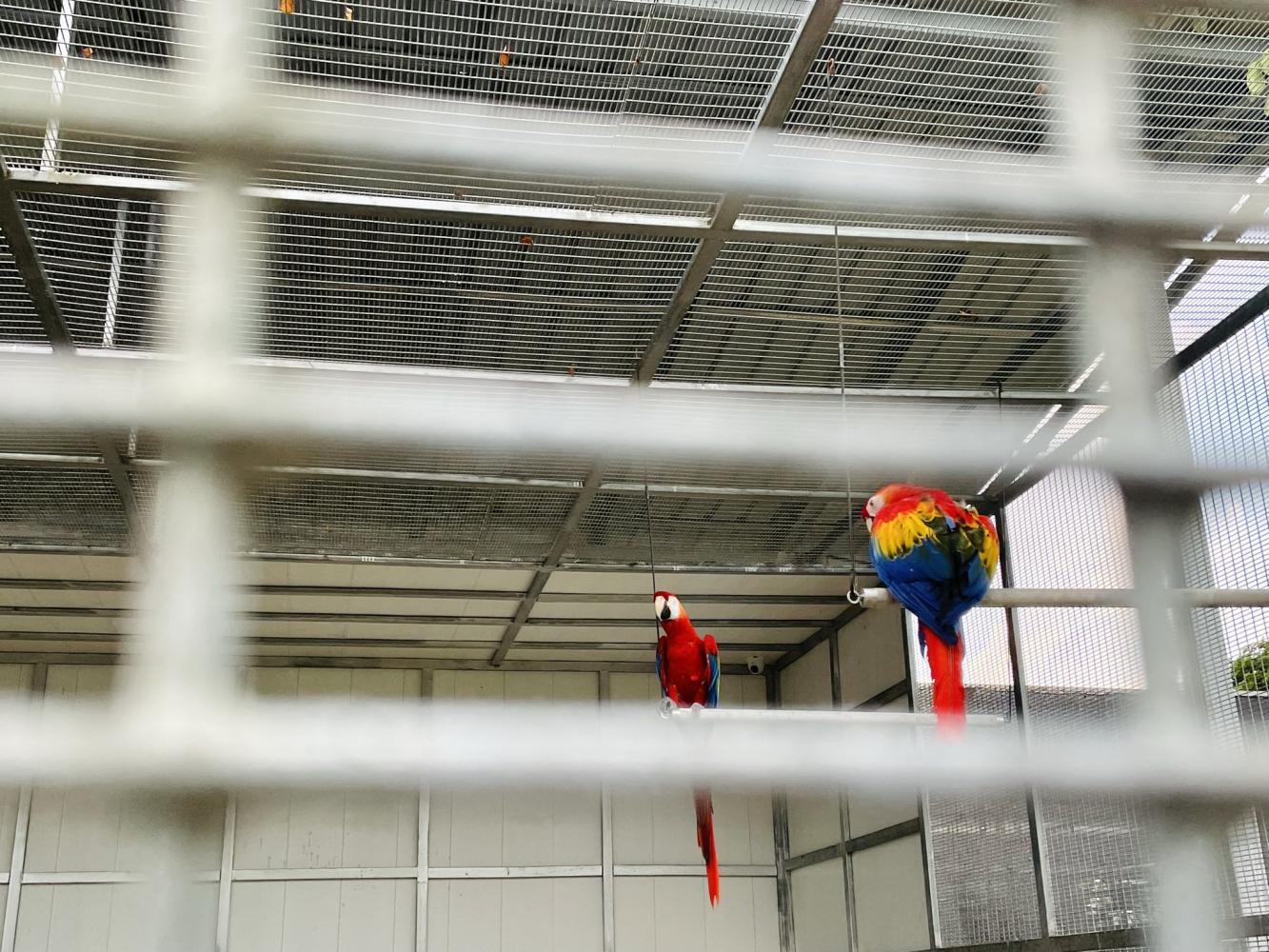 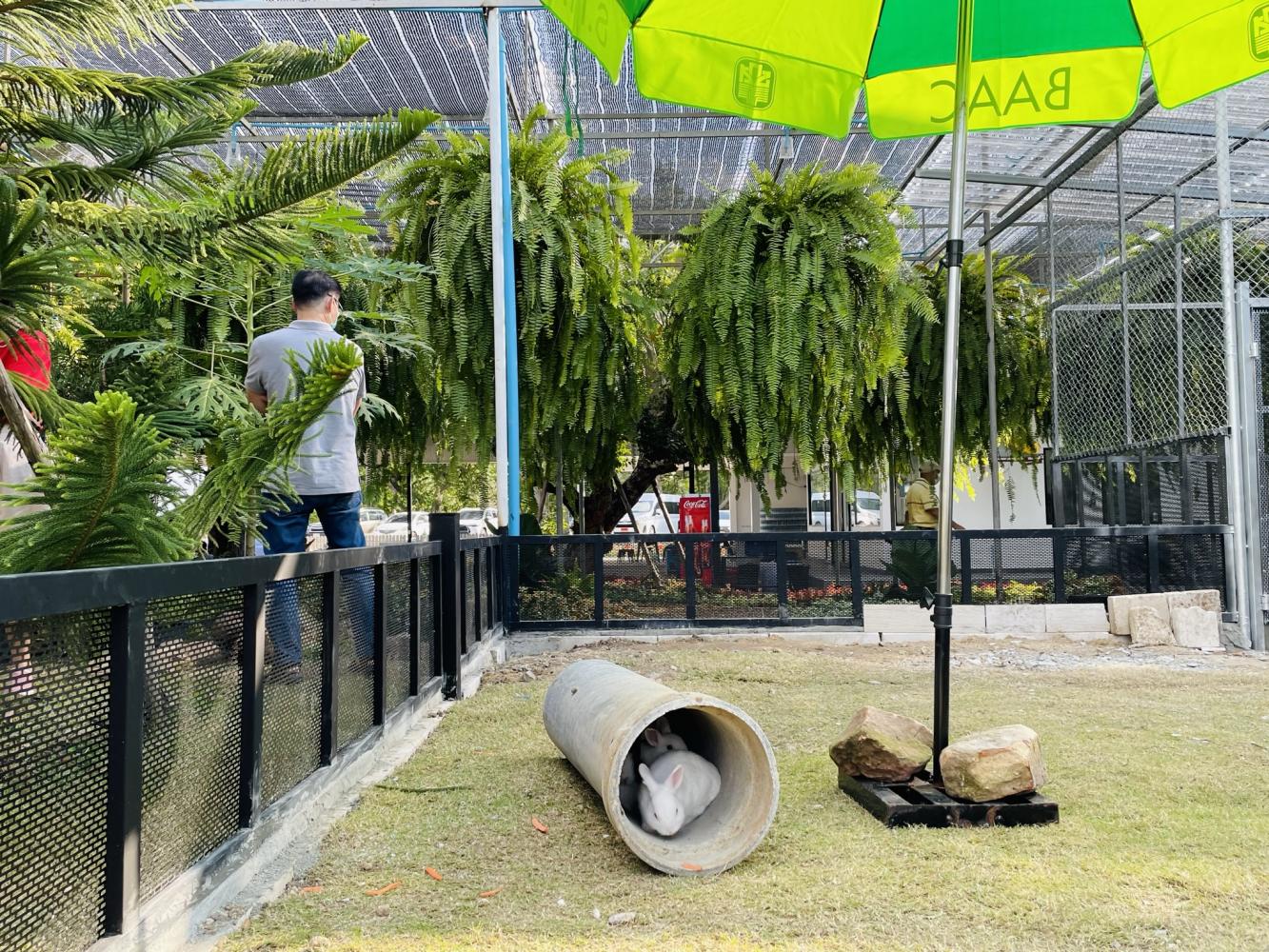 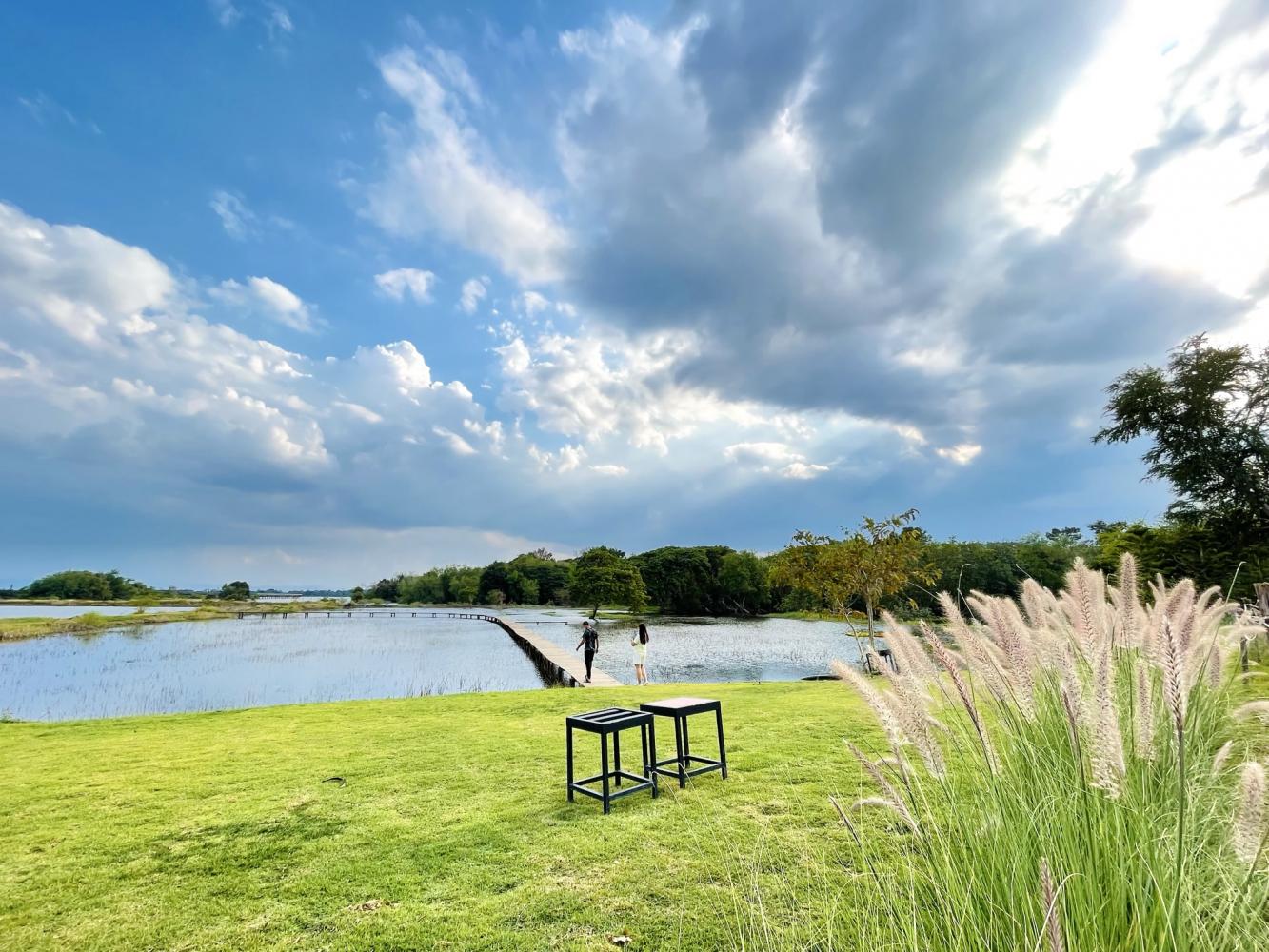 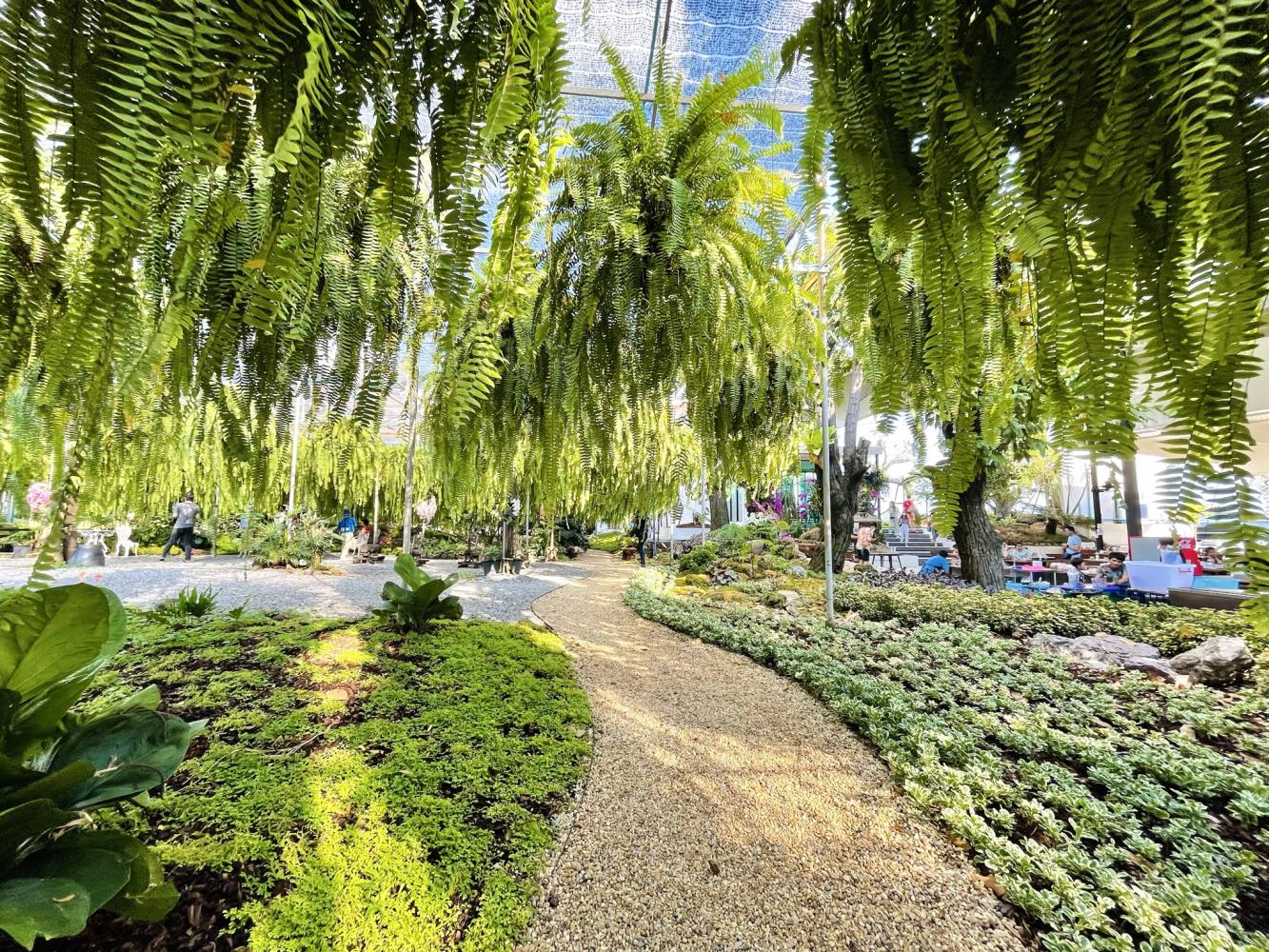 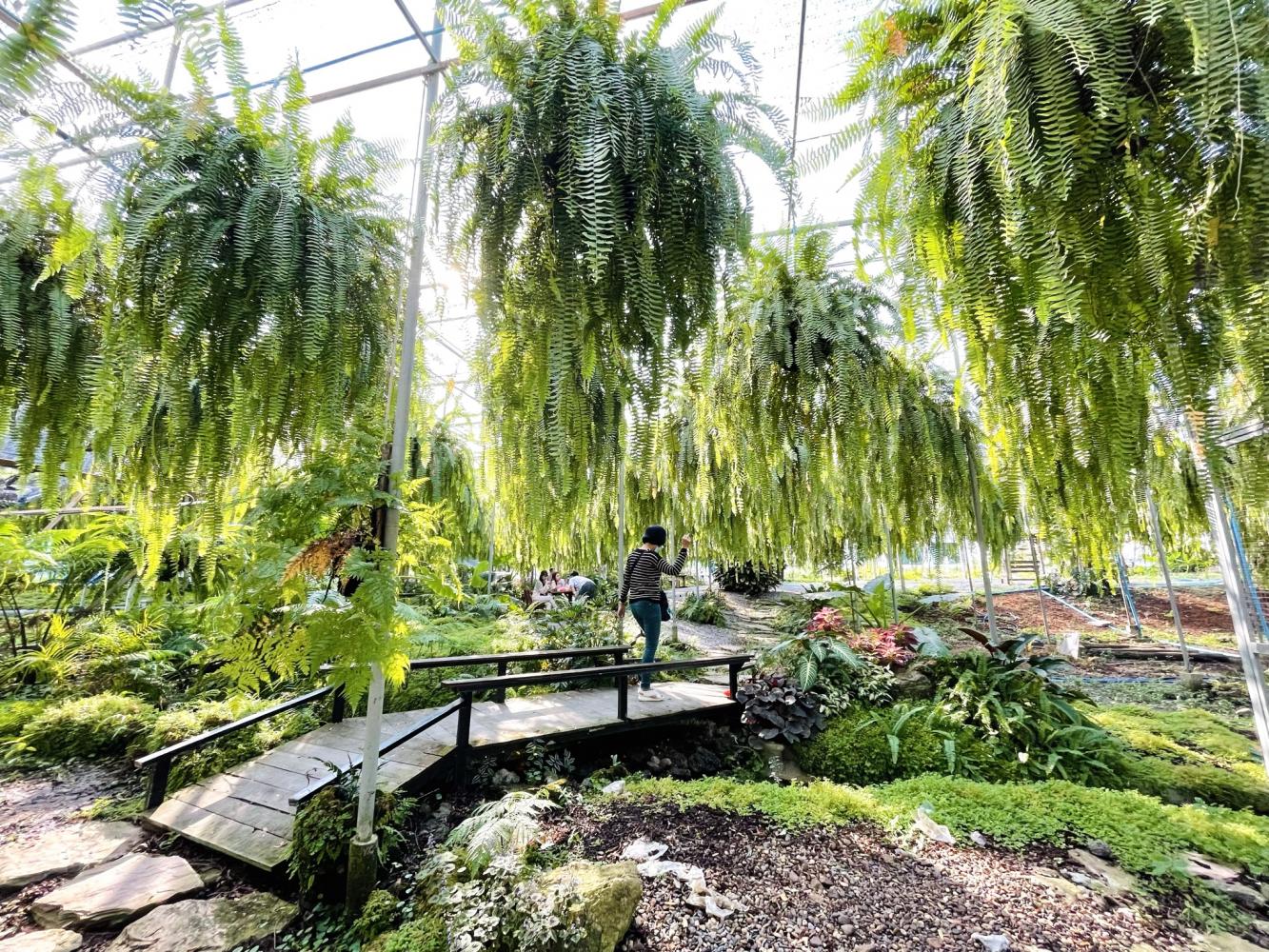 I continued to explore Lop Buri's largest fern plantations at Sap Prayoon Farm, which is located on Soi Phatthana Nikhom 27. It belongs to new-wave local farmer Naraphon Boonkhayai who, unlike his parents, thinks outside the box by breeding decorative plants rather than field crops.

In 2015, he began growing ferns in a 2m by 24m space and expanded to 4 rai over an 18-month period, becoming one of top fern suppliers for plant markets around the country. In 2019, he teamed up with his friend Phongsathorn Sangchaipaisan, who specialises in marketing, to convert a portion of his farm into a small cafe and noodle shop, which gained popularity among tourists.

Due to disease control rules, their farm was forced to close for a year, but they took this opportunity to develop their business and improve the landscape to become a new green tourism attraction.

"I was born to be an agriculturist. To feed the local factories, my parents have cultivated corn, cassava and sugarcane on the 80 rai property. My relatives and I also established mushroom farming as a micro-community enterprise. I like ferns and breeding them seems like an experimental project. Ferns are considered luxury goods, but they are popular in Thailand. I began selling at Chatuchak Market and rose to become a leading supplier," Naraphon said.

"I'm lucky that my farm is close to the Pa Sak Jolasid Dam, so we have access to natural water for cultivation. It's preferable to utilising groundwater, which causes plants to suffocate by forming limestone at their roots. This neighbourhood, however, is covered in laterite soil, which is unsuitable for fruit growing." 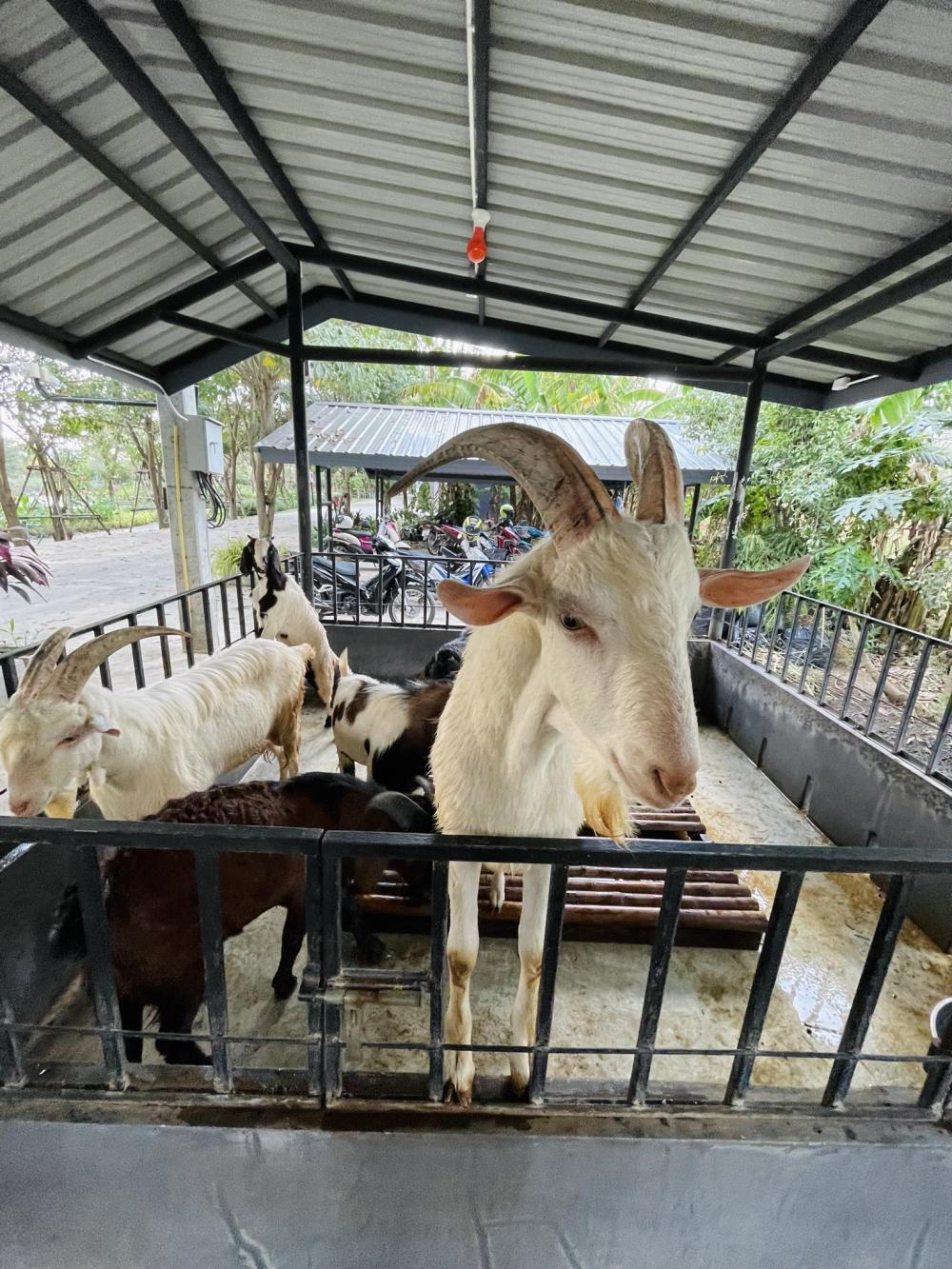 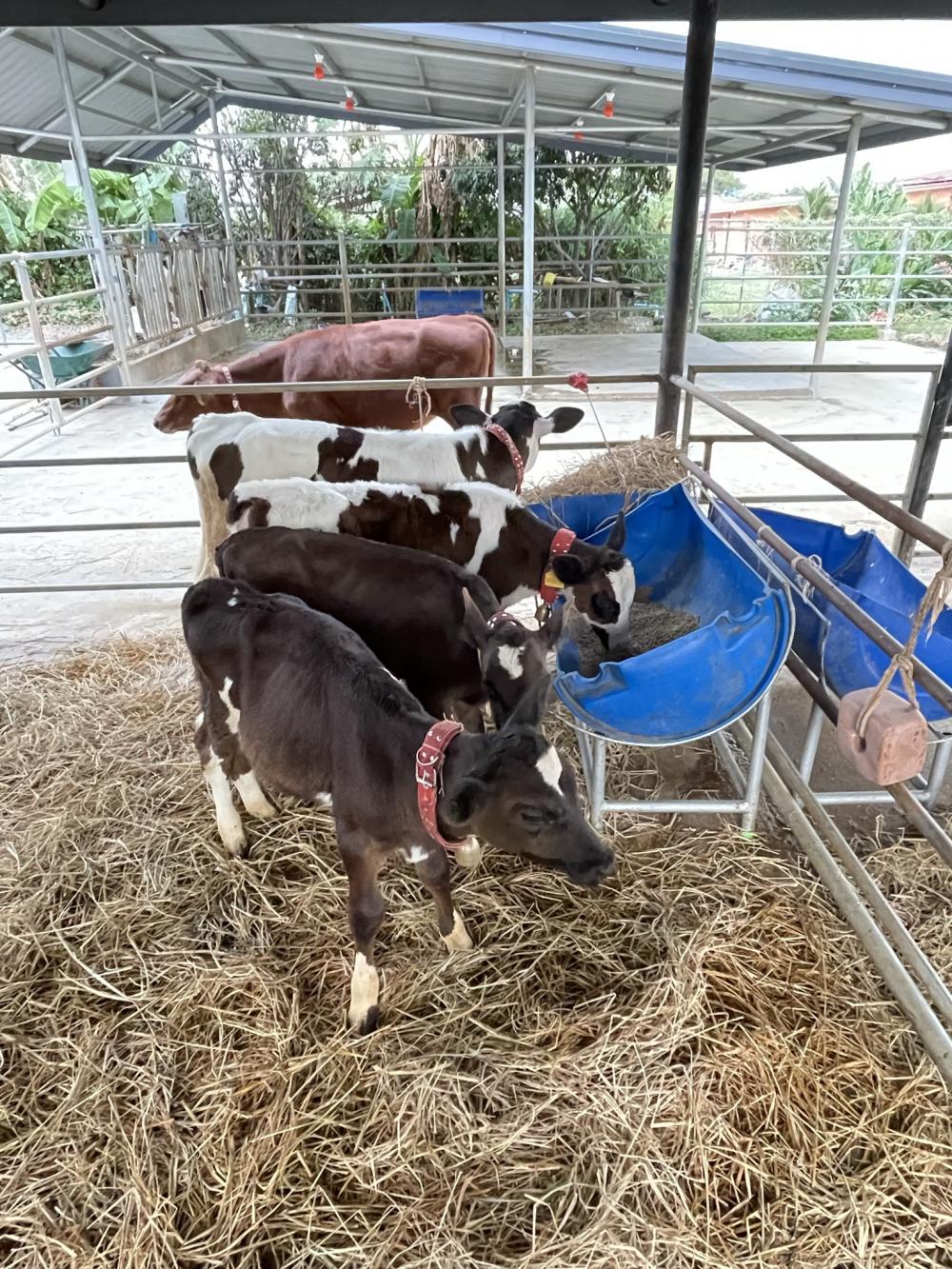 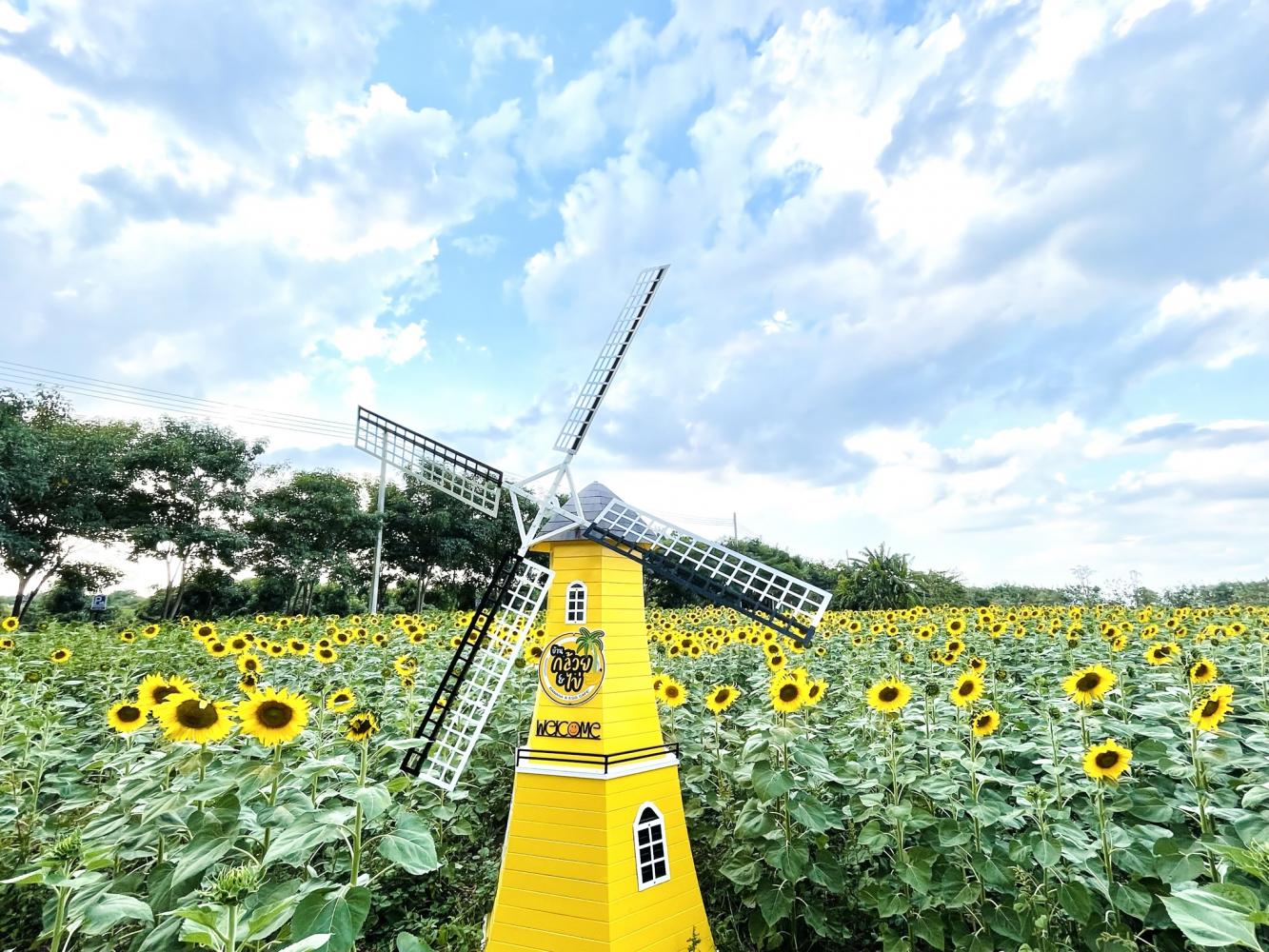 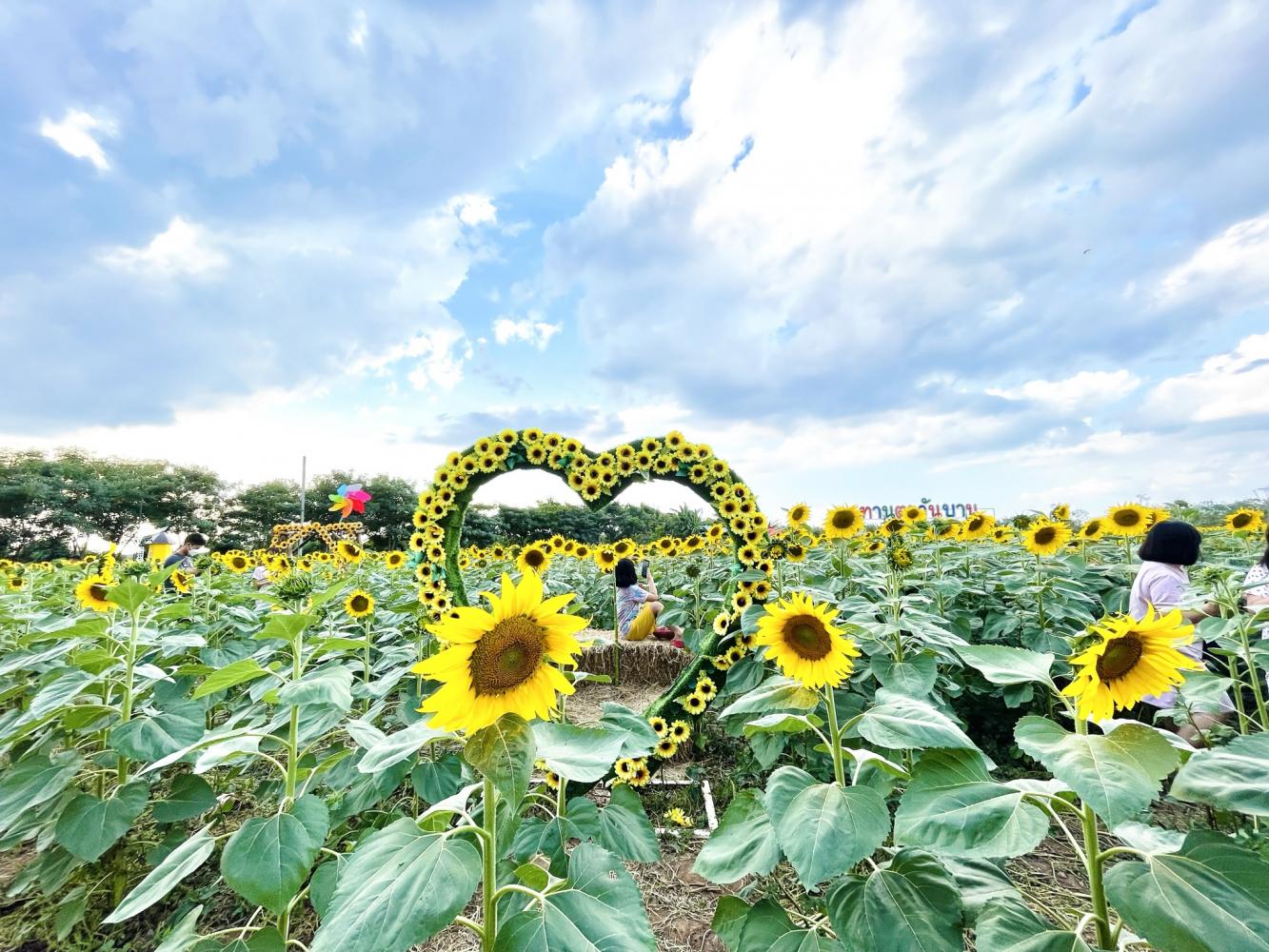 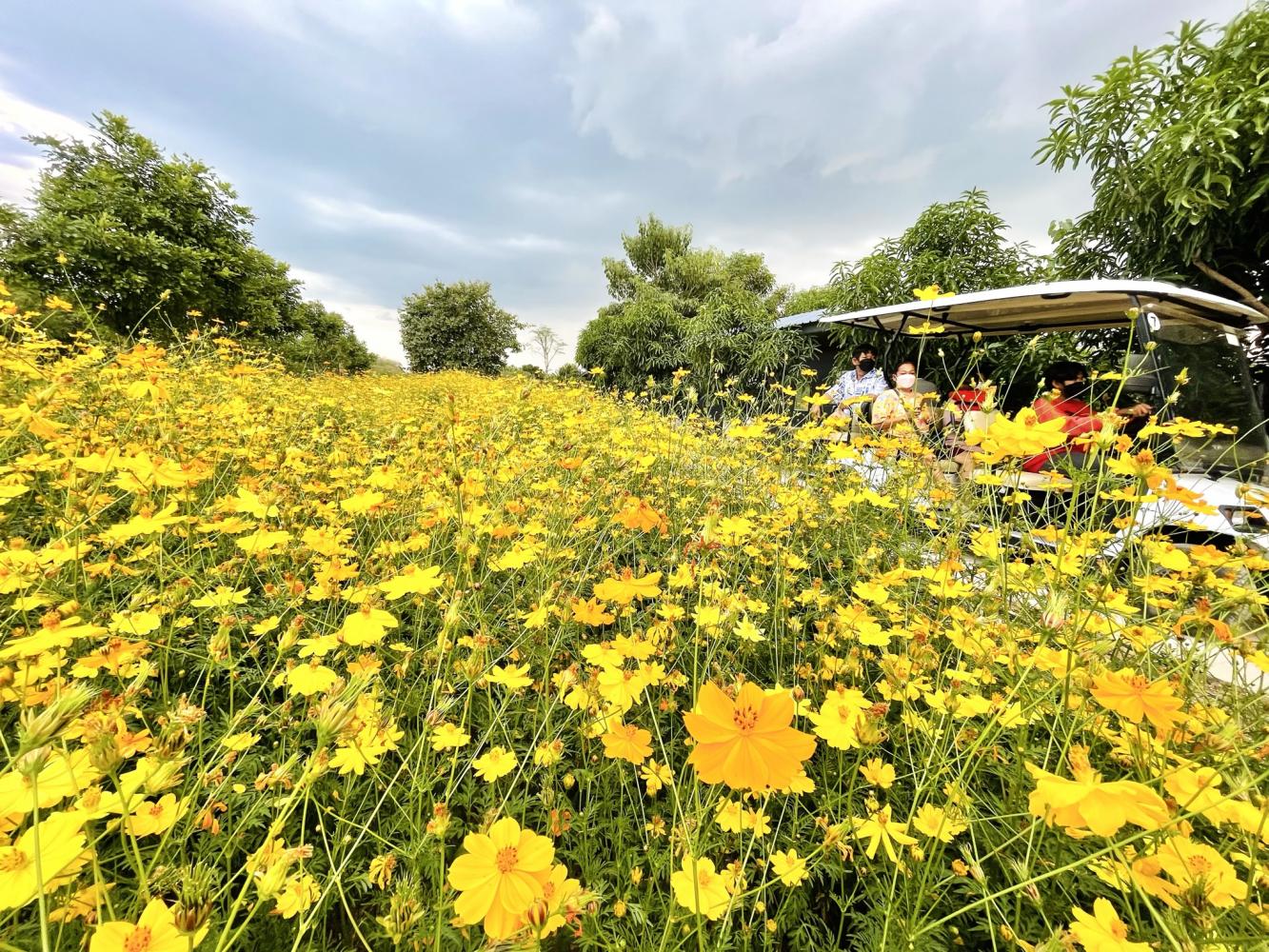 Reopened last month, the farm now occupies 16 rai and was redesigned to incorporate a beautiful fern garden and playground, where people of all ages can come to hang out together. Children can play with a family of fluffy bunnies and take photos with colourful macaws, while parents search for ideas to improve their home. The farm sells a variety of ferns such as sword fern and fishtail fern as well as other auspicious plants, starting at 70 baht.

With a stunning view of a lake and a lush garden, the cafe/restaurant comes in a bigger scale and serves a wide range of easy-to-eat dishes, coffee and herbal drinks, with favourite healthy pastries prepared by local villagers. The farm also plans to provide accommodation in the future.

Ban Kluay Lae Khai (Banana and Egg) Cafe, approximately 6km from Sap Prayoon Farm, was my last stop. It was founded two years ago by logistics entrepreneur Srisak Lilawitmongkol on 75 rai and is currently promoting itself as a learning centre for local farmers and families interested in mixed farming.

A row of golf carts is parked amid pleasant breezes, and a group of local students serve as driver and personal guide on a farm tour. We drove past vast plantations of banana, mango, sapodilla and custard apples, while the big sunflower field in the middle was blooming to greet visitors. A new addition to the property is a colourful sulfur cosmos field to fulfil the farm tour experience.

While tourists had fun feeding calves, rabbits, piglets and sheep, I browsed the mini mart, which was lined with fresh agricultural produce and healthy snacks made from the farm's fruits such as sun-dried banana and banana chips. Tickets for the farm trip cost 20 baht and can be used as a discount voucher.

"I fell in love with the river and the nature in Lop Buri. My wife and I bought the land with an intention of building a weekend retreat and planting a variety of fruit trees across the property. I figured out how to cultivate them on my own. After I retire, I want to be a farmer following King Bhumibol's philosophy of sufficiency economy," Srisak said.

"Originally, I planned to use this location as a cafe and mini-mart to sell fresh fruit from my orchard at reasonable prices. Later, I turned it into a tourist attraction and a learning centre to help local villages generate more income. A large orchard has been set aside for an eco-tour programme, while an animal farm will teach children about animal husbandry. Local students work part-time in a restaurant and on a farm tour during weekends. This year, I added an extensive sunflower field, which will be on view until April to attract tourists. Our restaurant offers a wide range of favourite Thai and Western dishes that everyone can afford."