Next week, the ox will pass the baton to the tiger, and a swarm of red-shirted pilgrims will rush to revered temples to pray to the gods for good fortune and wealth in the year to come. 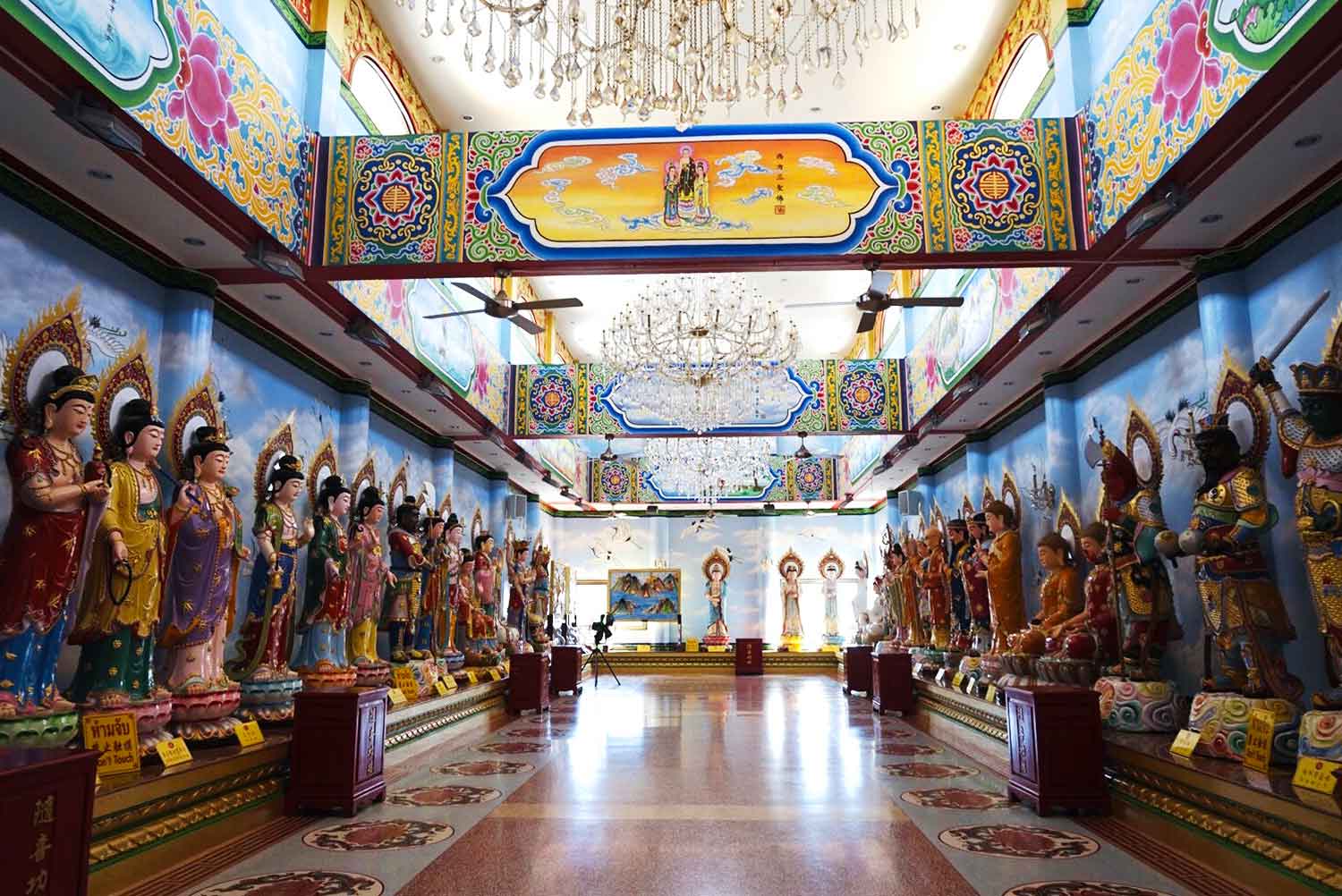 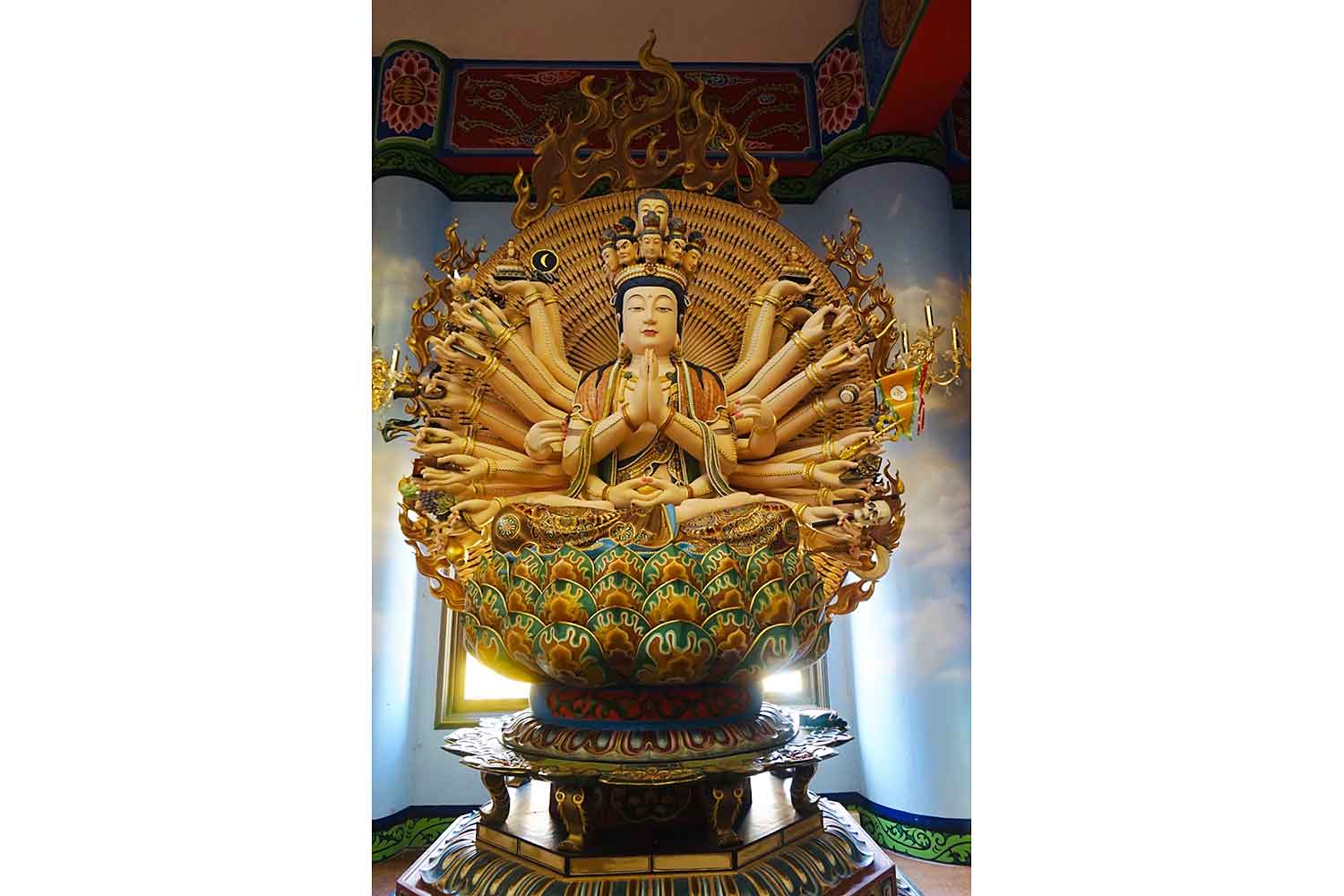 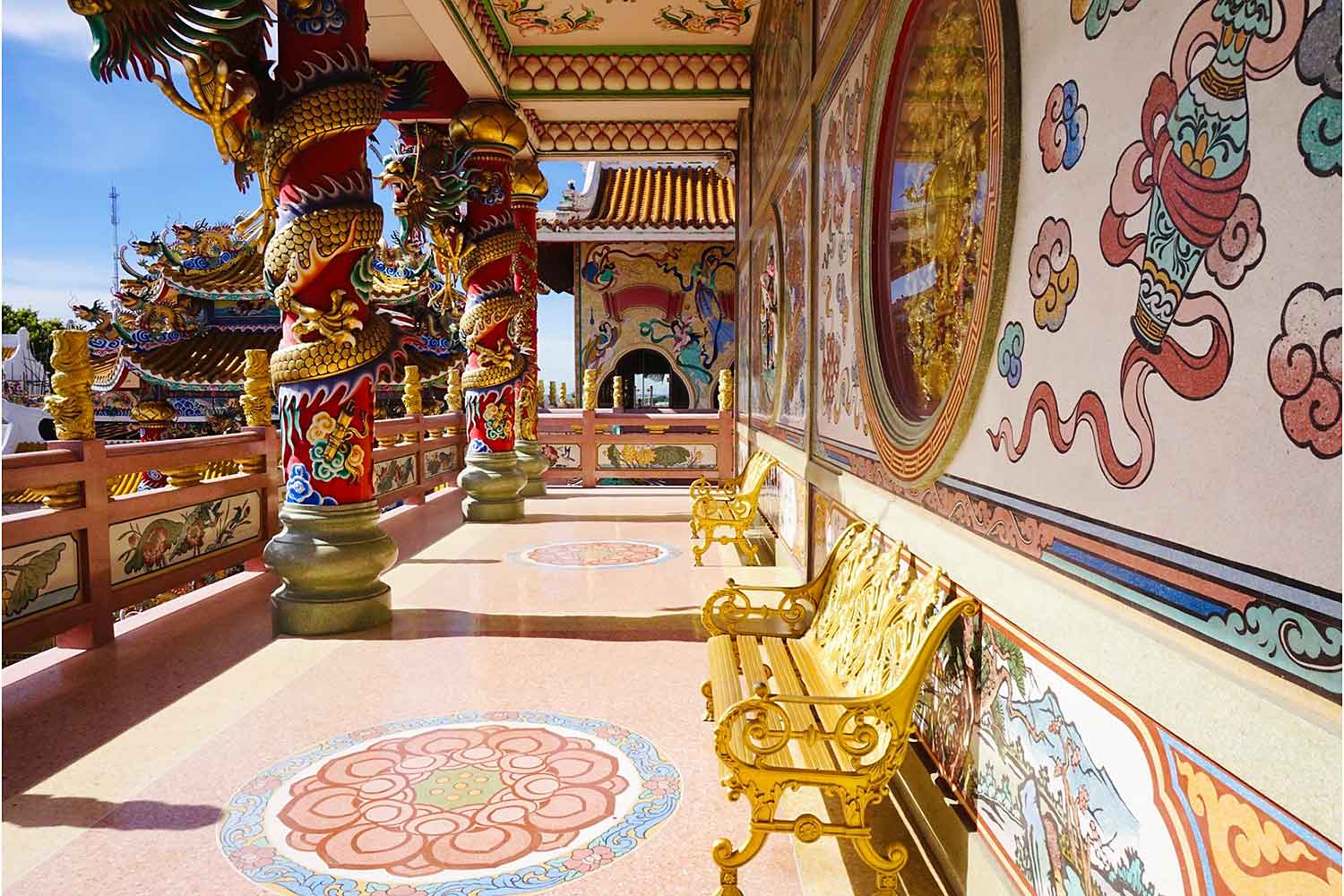 According to Chinese astrology, those born in the Year of the Tiger, Monkey, Snake and Pig may have hardships or poor luck in the next year and they can ask Tai Sui, the God of Age, to keep them in sight as well as other Chinese deities for good health and compassion.

Just an hour's drive from Bangkok is the beach town of Ang Sila in Chon Buri, and those born in the Year of the Monkey may arrange a day trip to Wihan Thep Sathit Phra Kitti Chaloem (Nezha San Tai Zi Shrine), home to 60 Tai Sui sculptures.

This shrine was initially erected in 1991 on an 800m² plot of land, then in 2002, the Dharma Rasami Maneerat Foundation teamed up with merchants and devotees to contribute more than 1.3 billion baht to extend the 36 rai compound to commemorate the late King Bhumibol's 72nd birthday.

People born under the pig zodiac can visit Wat Dibaya Vari Vihara and pray to the Green Dragon god for good health and protection from disputes as well as a group of three deities, Fu Lu Shou, for good fortune, happiness and longevity. 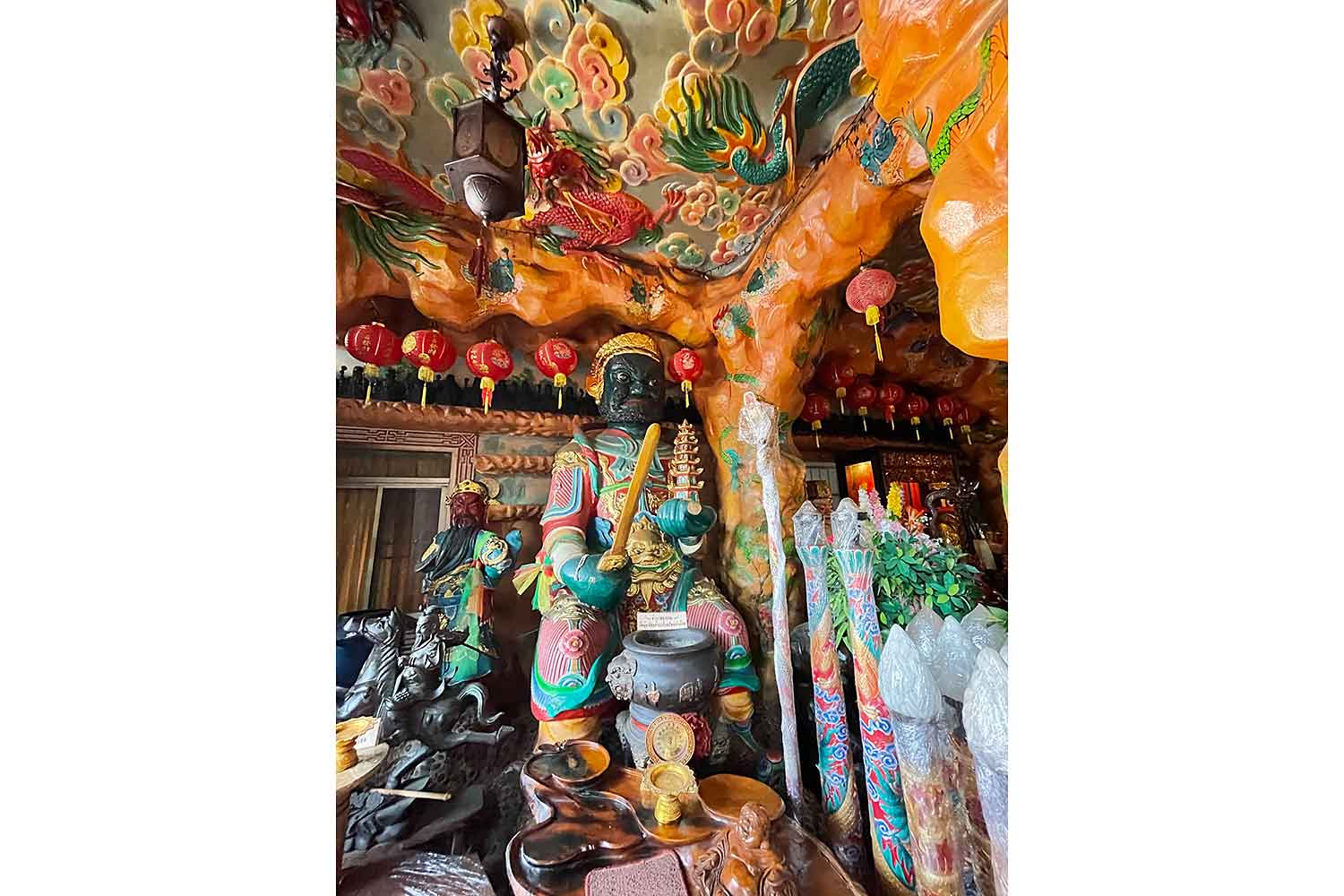 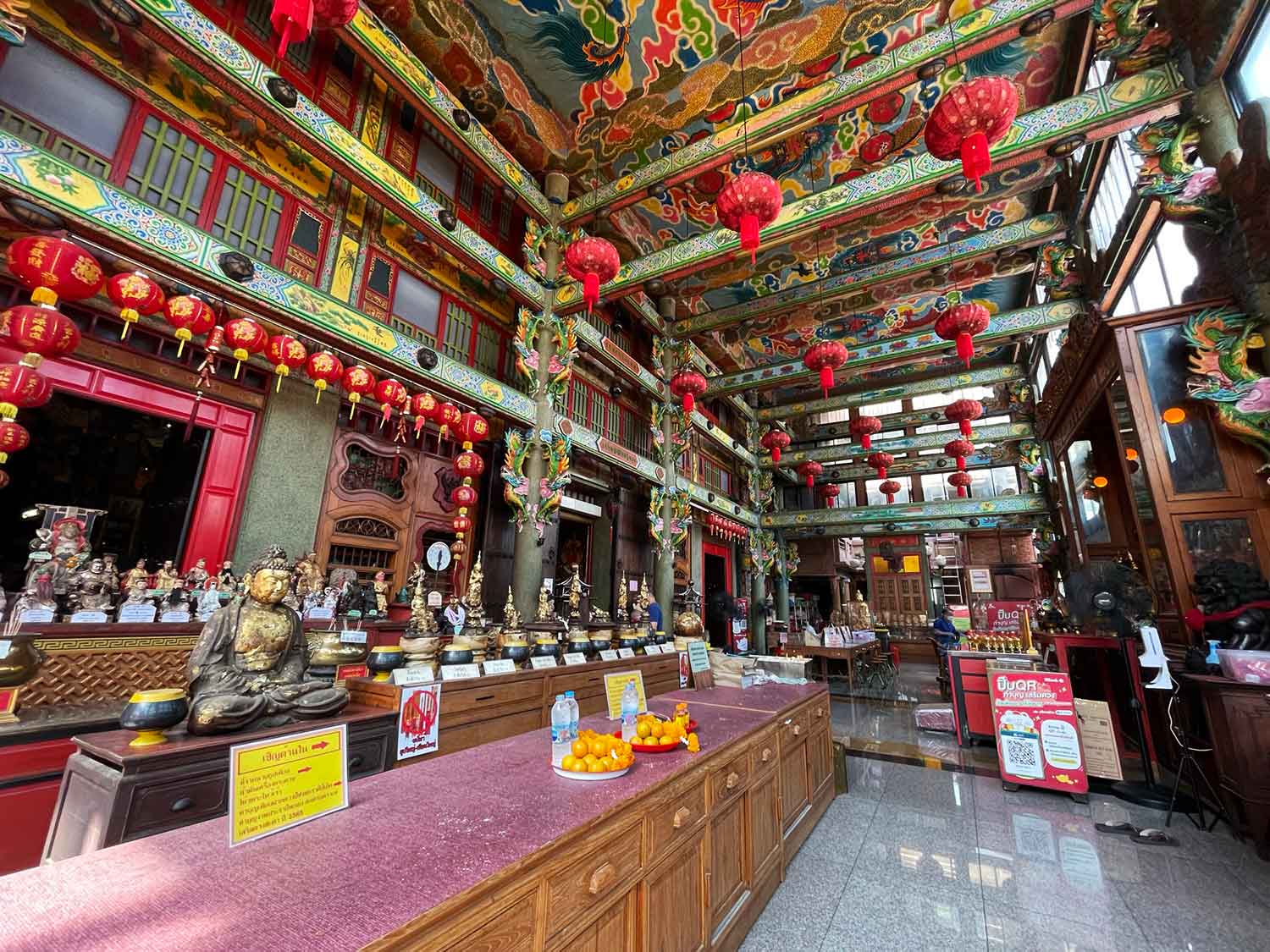 Just a 650m walk from MRT Sam Yot station, this temple was built in 1776 after King Taksin allowed Chinese-Vietnamese migrants to settle on the east bank of the Chao Phraya River and allocated land to them.

It was left abandoned during the early Rattanakosin period until a wealthy Chinese merchant and local villagers donated 8,000 baht to restore it after Chinese monk Hai Shan travelled from Hunan and stayed there during the reign of King Rama V.

It's home to a 200-year-old holy water pond, which is believed to be the residence of the east's Green Dragon god, who signifies the coming of spring, new life and plant growth. In 2001, a budget of 300 million baht was poured into a massive 10-year restoration with the construction of a new ubosot, which is designed to resemble the Green Dragon's hallowed cave.

People born under the tiger sign congregate at San Chao Pho Suea in Phra Nakhon district, where they can present a set of 18 incense sticks, a pair of red candles, joss paper, marigold garlands, fruits, eggs and boiled pork to the Tiger God in exchange for protection and success. 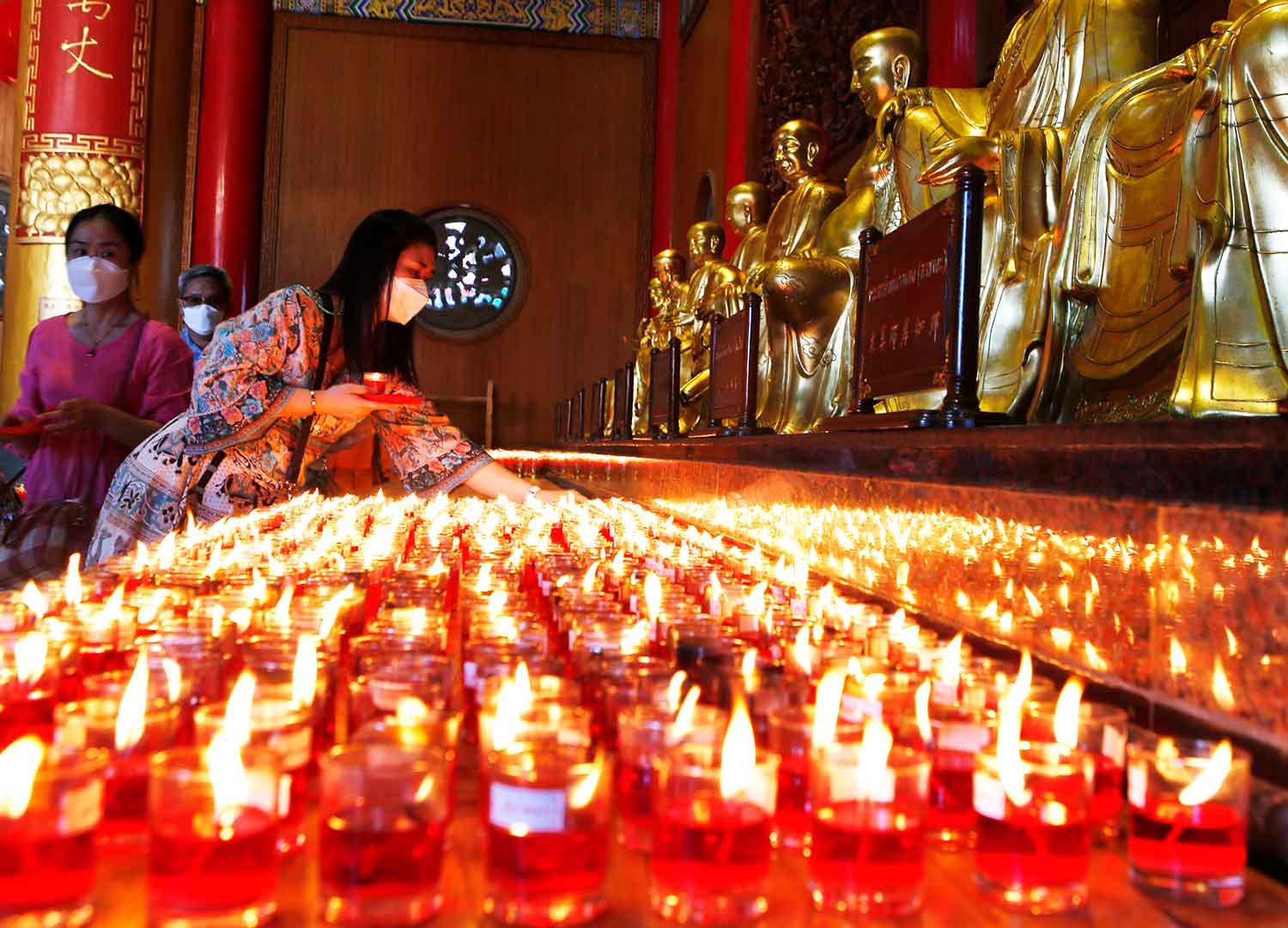 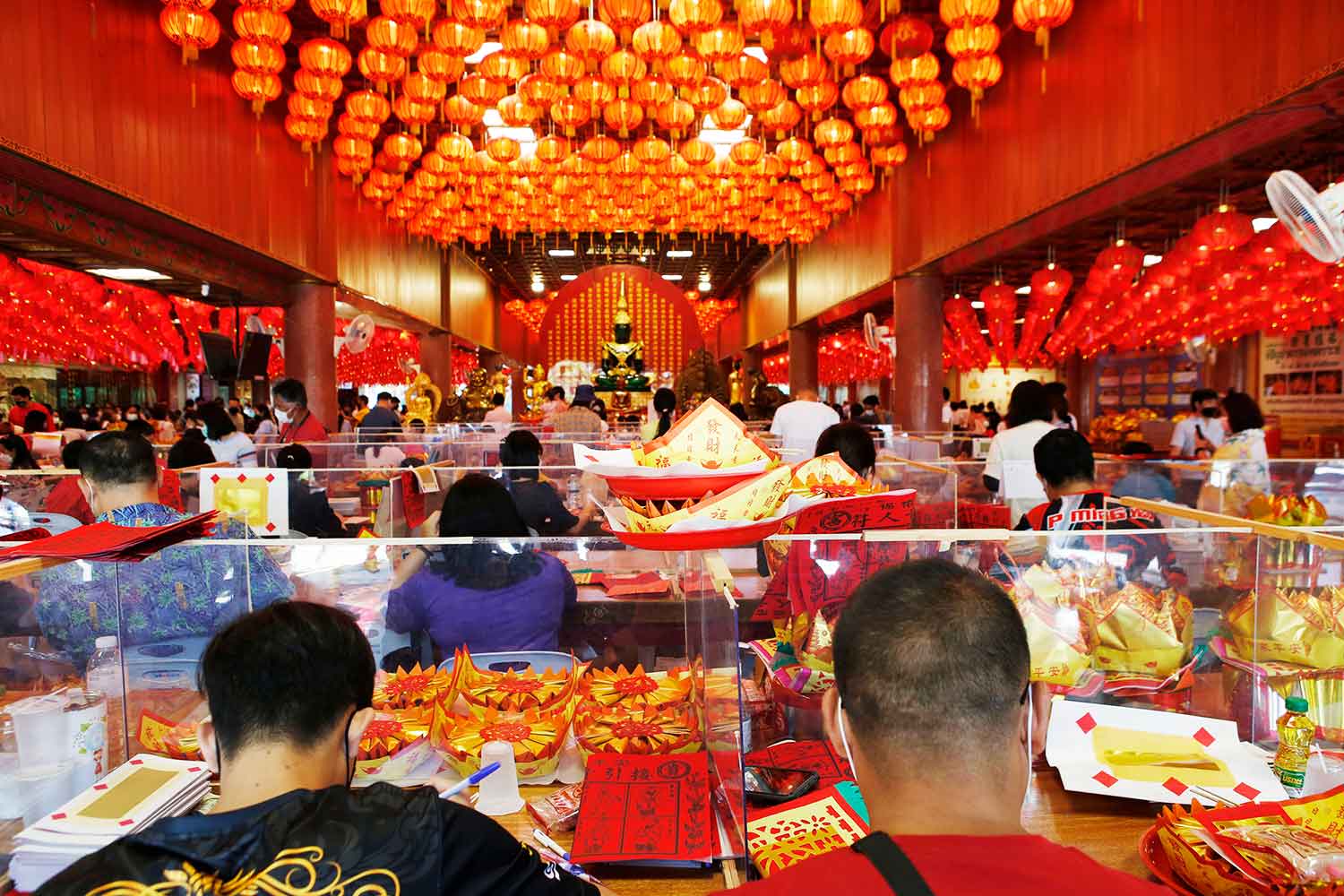 At Wat Boromracha Kanchanapisek Anusorn, pilgrims can write their names and birthdays on red paper to pray to Tai Sui for protection in the upcoming year. (Photos: Apichit Jinakul) 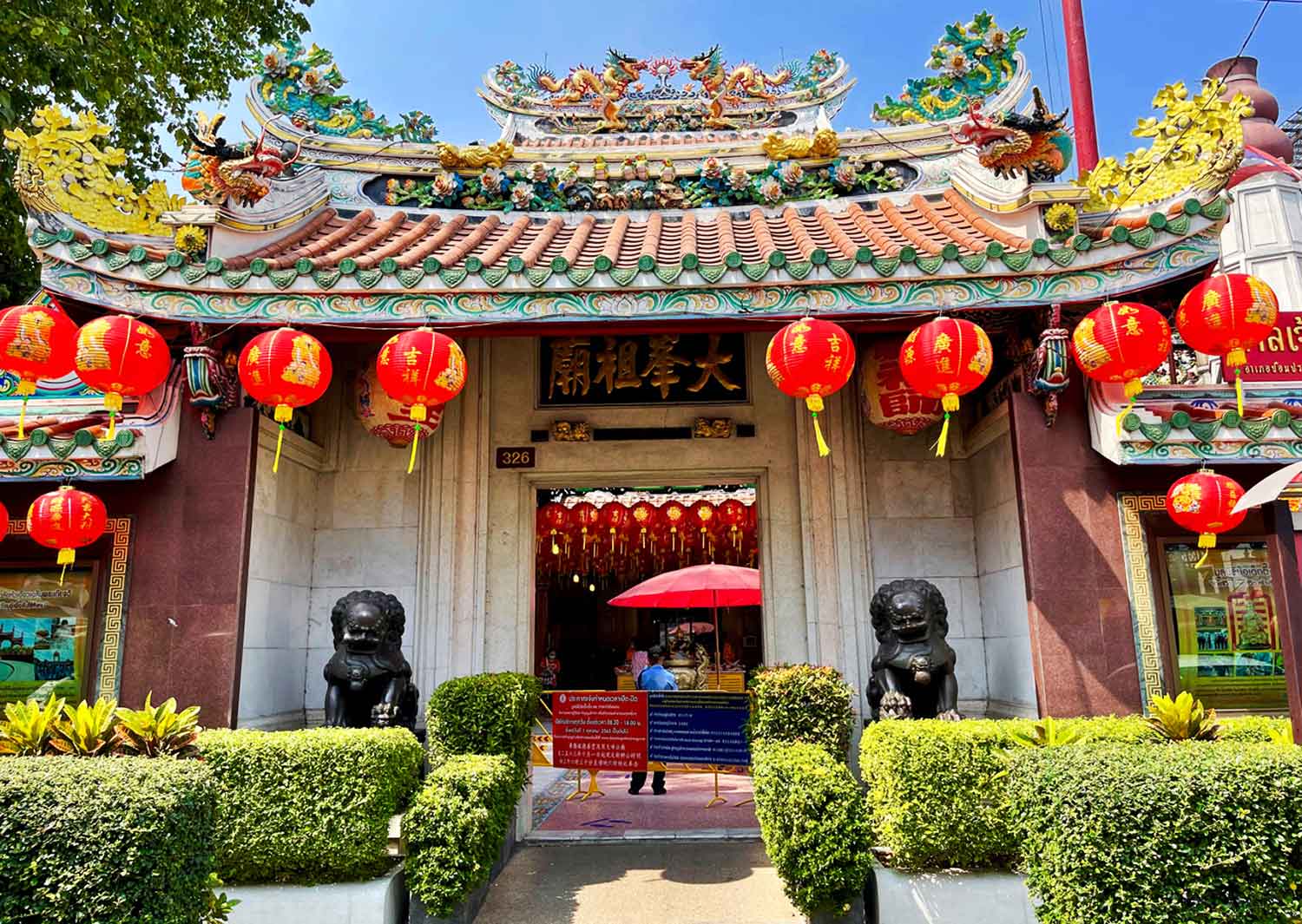 On Tuesday, visitors to the Tai Hong Kong Shrine can participate in a candle-lighting ritual to greet a parade of deities, who descend from heaven. (Photo: Karnjana Karnjanatawe)

Those born during the Year of the Snake can visit the Guan Yin shrine located in Thian Fah Foundation Hospital on Yaowarat Road. It was established in 1960 and is home to the sacred 1,000-year-old statue of the Goddess of Mercy who will bring you a peaceful year ahead.

Just a stone's throw away from Yaowarat is the Tai Hong Kong shrine, where people from four zodiacs can buy a set of eight incense sticks, a pair of candles and oil lamps as well as oranges before writing their names and birthdays on red paper to worship the highly revered statue of Tai Hong Kong from China.

Located on Phlab Phla Chai Road, Chinese merchants constructed this shrine in 1909 as a tribute to Tai Hong Kong, a monk who lived more than 900 years ago in Guangdong. He repaired a temple and raised funds for the impoverished and catastrophe victims in various locations, as well as assisting in the burial of the deceased with no family. His compassion inspired his followers to start other charity organisations, including the Poh Teck Tung Foundation in Thailand.

To celebrate the New Year, the shrine is now trimmed with red lanterns and a large red-gold barge and a parade of Chinese deities is moored at the entrance. A candle-lighting ritual will be held on Tuesday to welcome deities descending from heaven, and to begin praying to fend off bad fortune and bring wealth to the people.

Located in Nonthaburi, Wat Boromracha Kanchanapisek Anusorn is currently decorated with red lanterns, with pilgrims from all four zodiac signs gathering on the ground floor to write their names and birthdays on red paper. 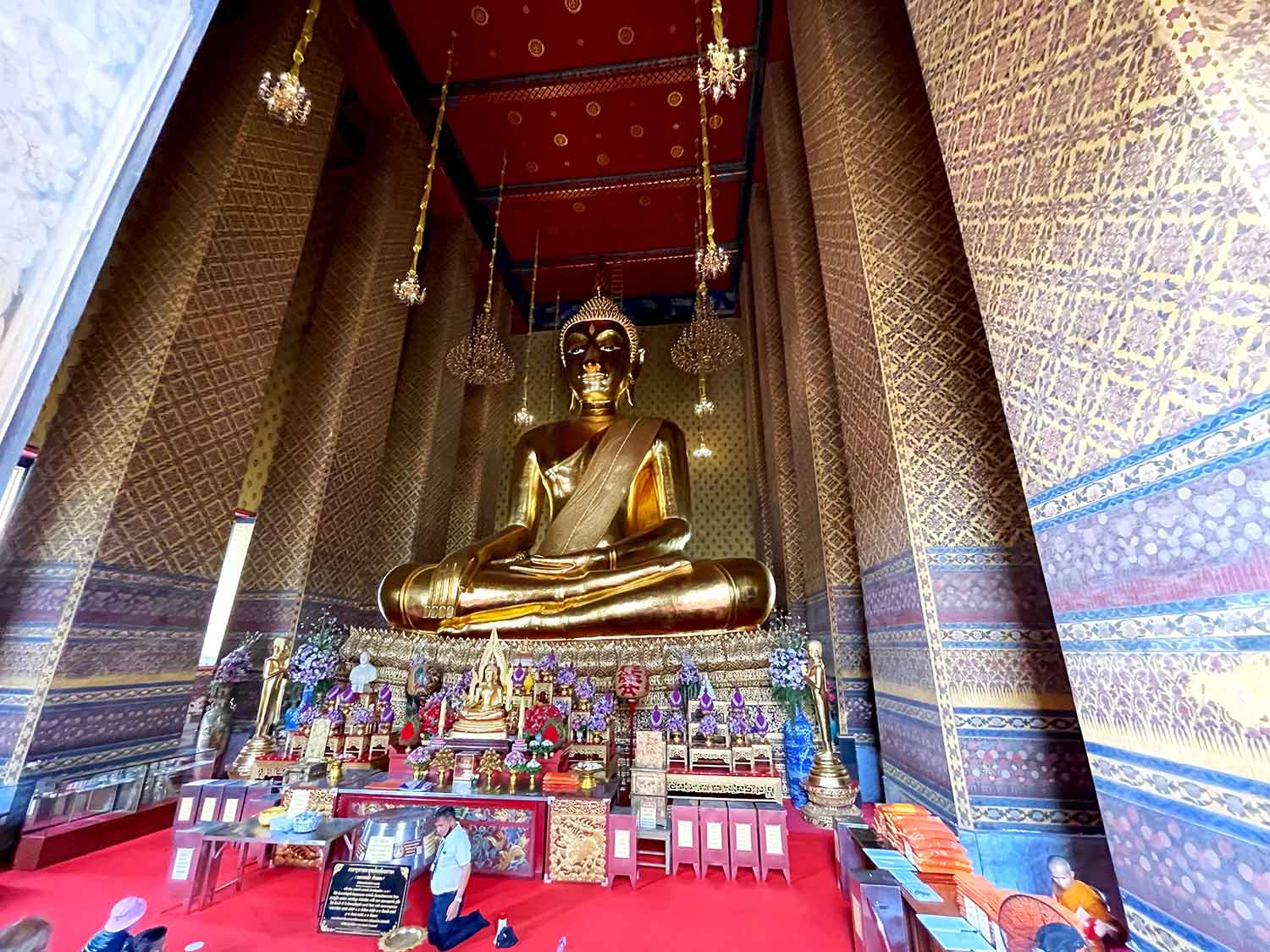 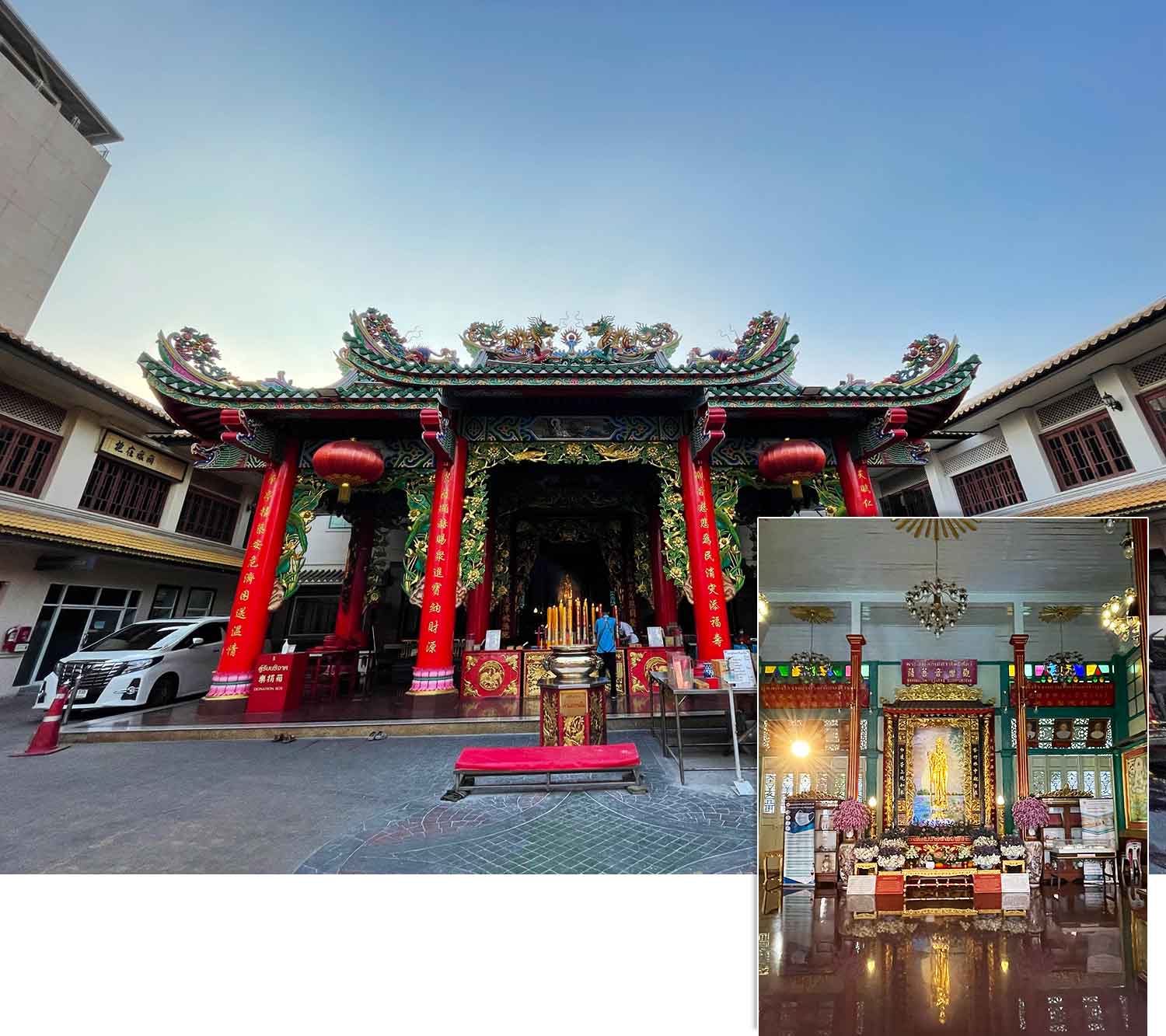 Climbing up to the 2nd floor, Tian Wang's Sanctuary stands between a drum tower and bell tower. Pilgrims can gather at the foot of a massive stone stairway and pay homage to Tai Sui by offering a joss paper tray of fruits and flowers, then waving a red paper 13 times from head to toe to ward off evil luck.

Inside, the sanctuary also boasts a green ceiling with dragons and several statues of Chinese deities such as Katyayana, the Sun God, the Goddess of the Moon, the Great Emperor of the North Pole and Tudi Gong. The 3rd floor is home to the Meun Buddhasukkavadi Hall with a trio of soaring Buddha statues -- Amitabha (the Buddha of eternal life), Phra Sri Sakyamuni and Phra Bhaisajyaguru Vaitoonprapha (the medicine Buddha) as well as a row of gold and red statues of their devotees.

Visitors will be led to the Avalokiteshvara Guan Yin Hall through a marble-like cloister where they can pray for good health and wealth in front of a stunning carved wood sculpture of Guan Yin (Goddess of Mercy) with a thousand hands.

Spread over 12 rai, this is a branch of Wat Mangkon Kamalawat in Yaowarat, established in 1996 to commemorate King Bhumibol's ascent to the throne 50 years before. The meditation hall, Phra Pariyat Tham School, and a verdant spacious courtyard with a Chinese-style pavilion and a lifelike, marble-like Guan Yin sculpture are all part of the temple compound. 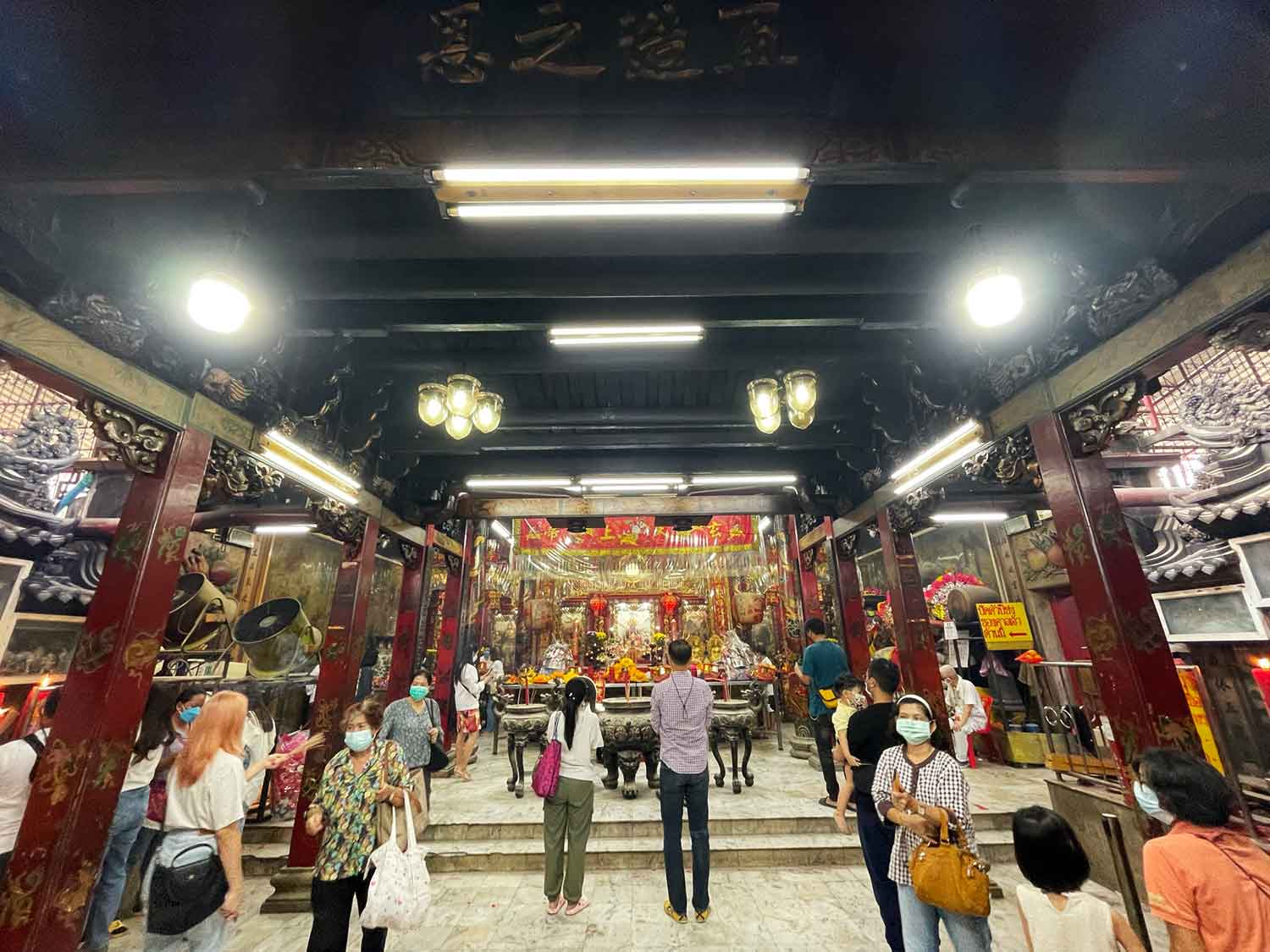 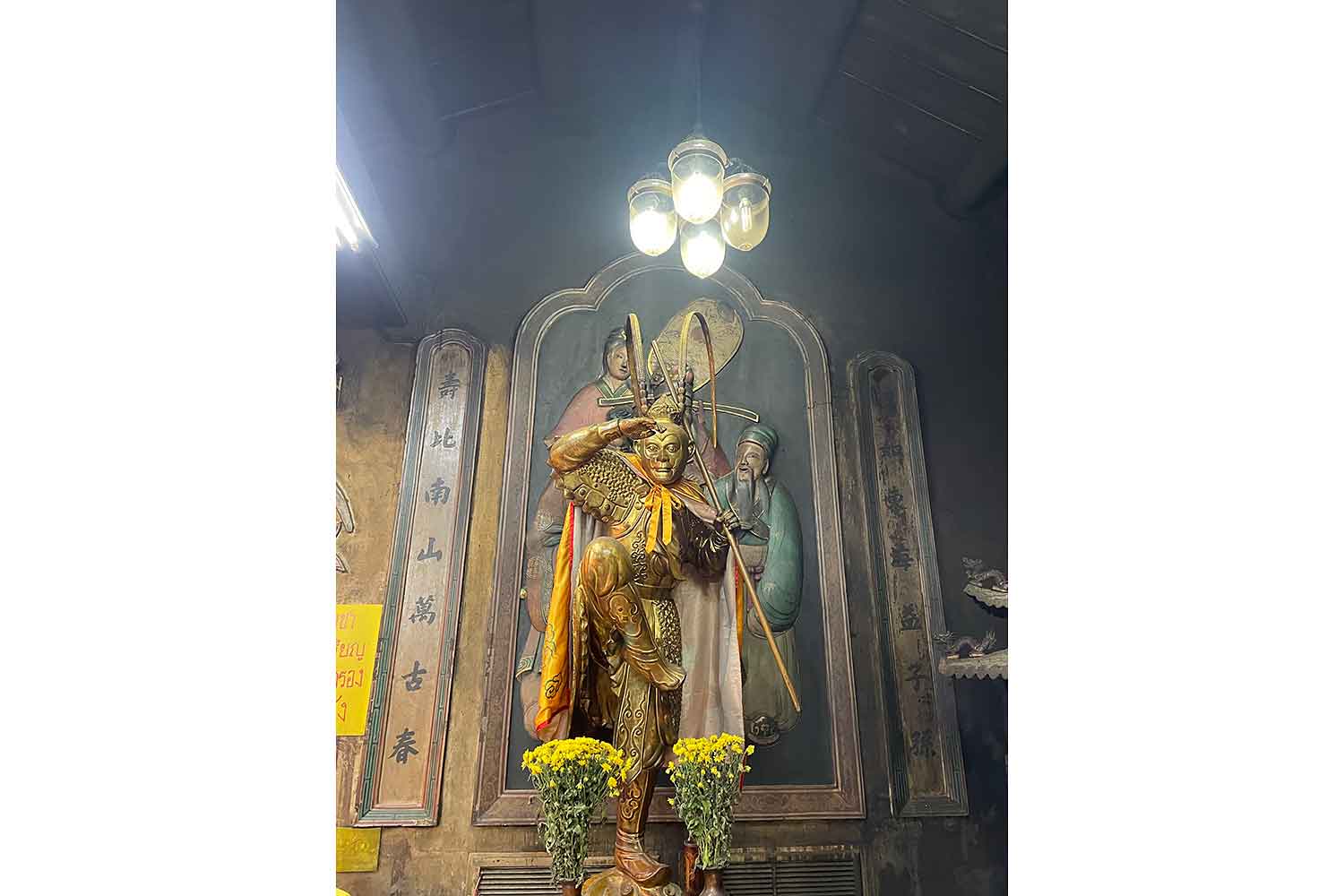 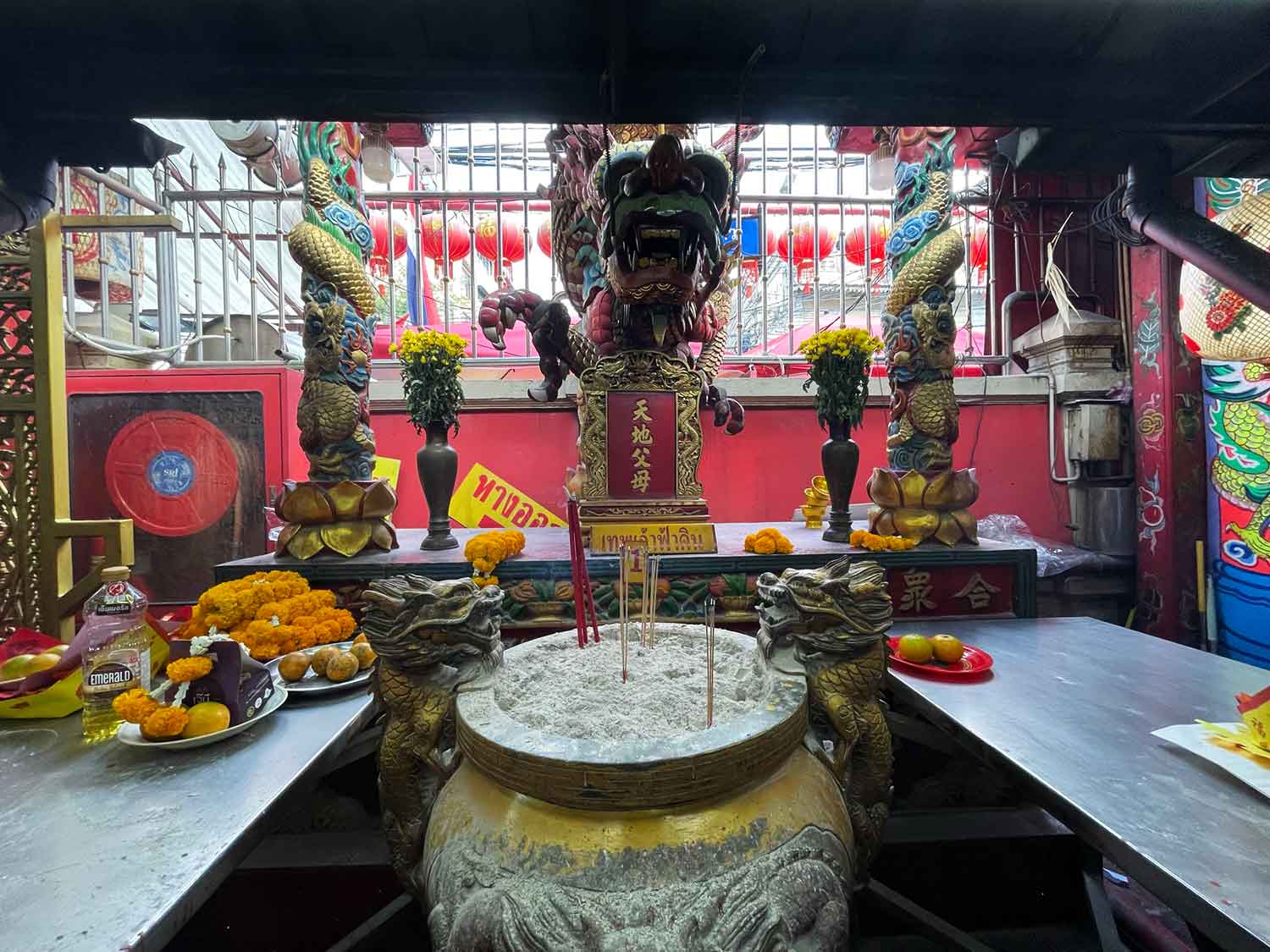 At San Chao Pho Suea, visitors can pray for protection and prosperity.

Wat Kanlayanamit Woramahawihan is a Buddhist temple on the west bank of the Chao Phraya, but it's also a popular destination for Chinese worshippers seeking protection from Phra Buddha Trai Rattanayok rather than Tai Sui.

Visitors from all four zodiacs can purchase incense sticks, red candles, flowers and red sheets of paper on which to write their name and birth date for a ceremony, while local pilgrims typically come to pray for success, safety and good companions.

In 1825, Chao Phraya Nikon Bodin, who lived near the mouth of the Bangkok Yai canal, donated his house and land to construct this temple as a homage to King Rama III. The main hall was then built in 1837 to house the massive Phra Buddha Trai Rattanayok Buddha statue, which was inspired by the Sam Por Kong Buddha statue at Wat Phanan Choeng in Ayutthaya. This temple boasts classical Chinese-Thai architecture as well as Thailand's largest bell.