After departing the Skytrain at BTS Saphan Taksin station in the early morning and turning right, I went on a walking tour with my travel companions to explore the final leg of Charoen Krung Road and Thanon Tok, which runs through the lively residential neighbourhoods of Yannawa and Bang Kho Laem. 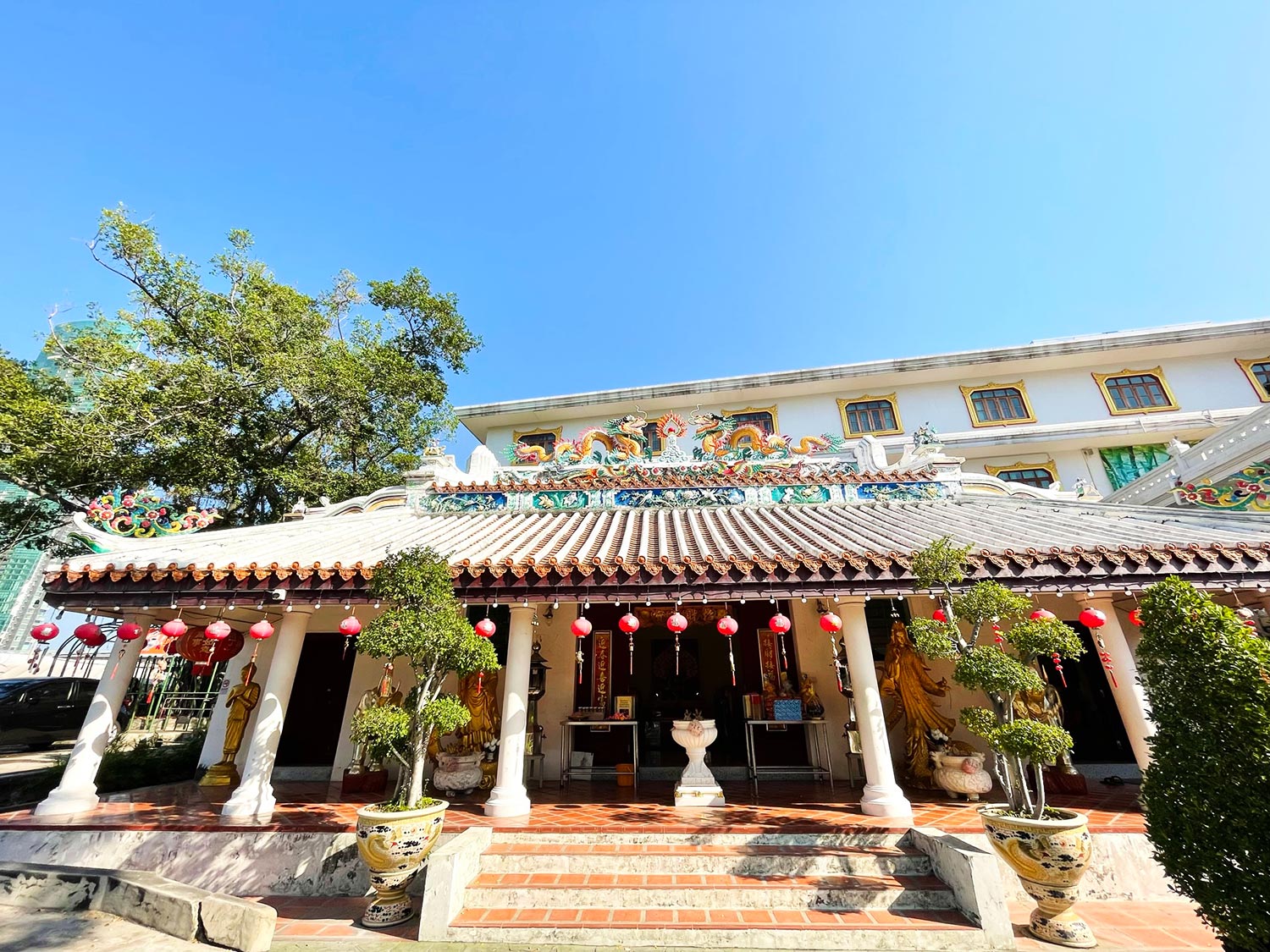 A Chinese shrine at Wat Yannawa. 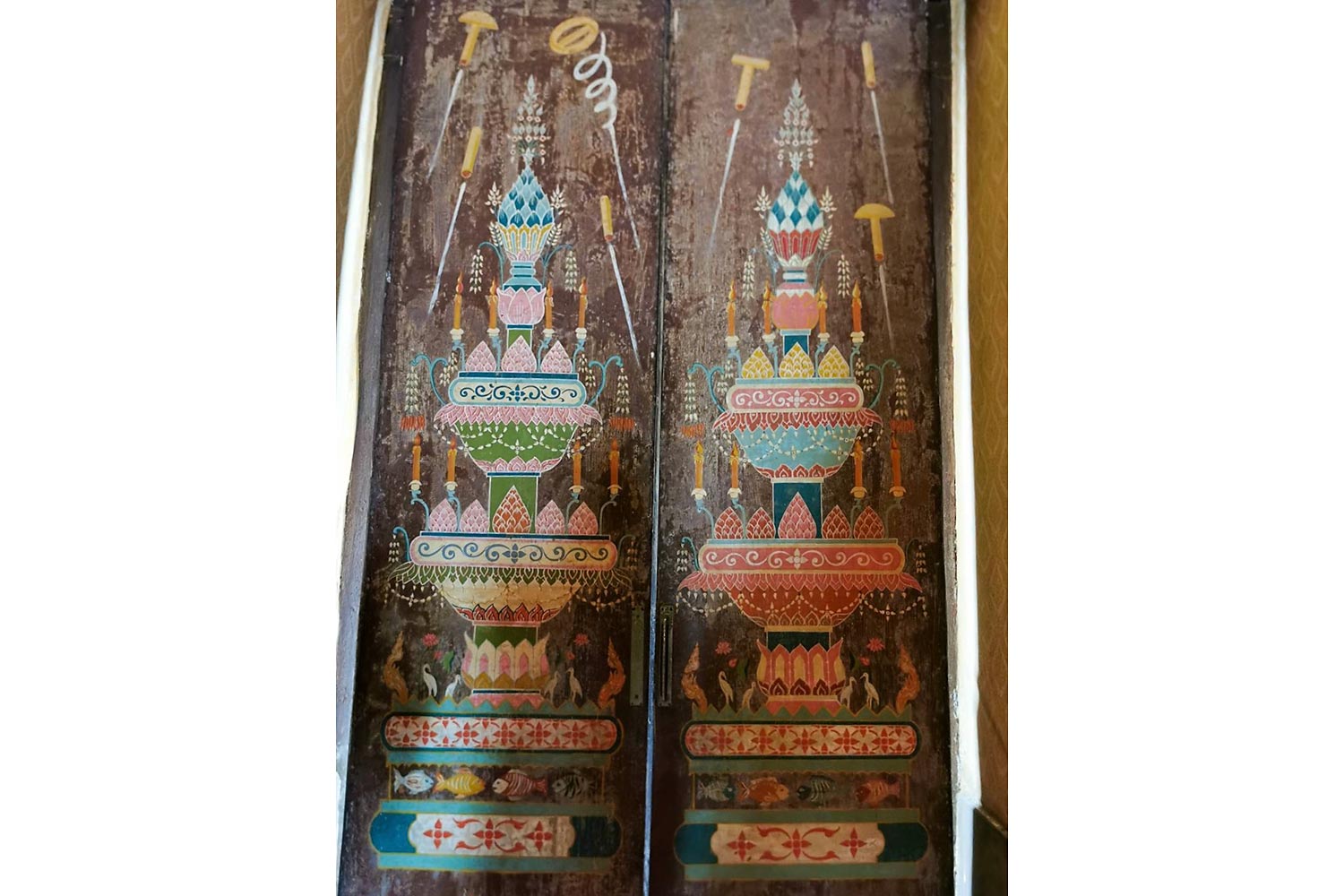 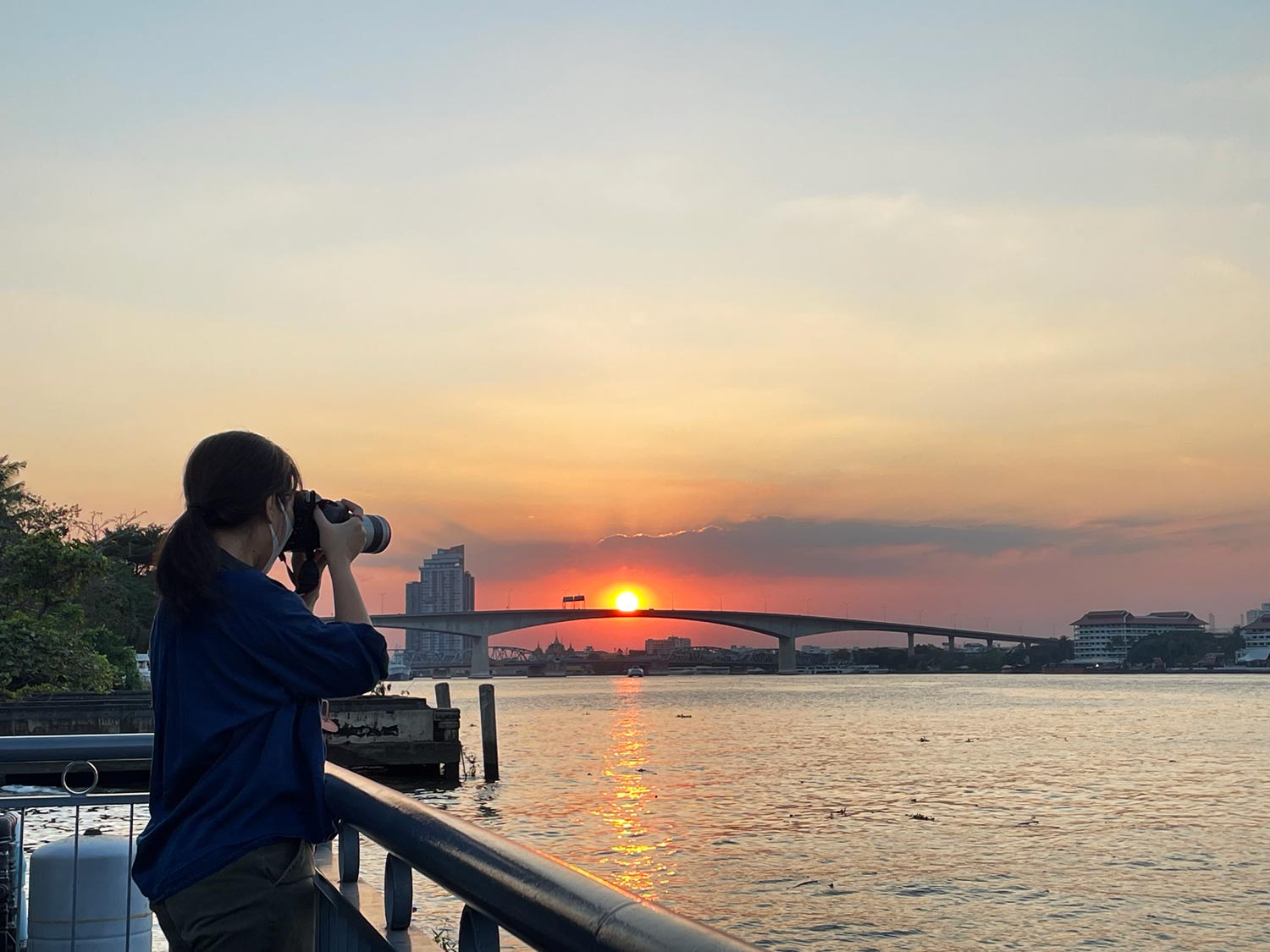 Asiatique the Riverfront is built on land where Wat Phraya Krai was located, and is now a popular place to watch the sunset.

The roadways transport visitors back to the early Rattanakosin period when the capital was relocated from Thon Buri to the eastern bank of the Chao Phraya River. King Rama I allowed a crowd of Mon troops and migrants from the town of Dawei, Myanmar, to settle down in the Yannawa district and allocated the land for cultivation while assigning observers to guard the city walls.

Nowadays, historical Buddhist temples stand beside a Christian graveyard and mosques to illustrate an ethnic mosaic, while vast plantations have been replaced by shophouses, a community mall, chic cafes and restaurants, reflecting the cohabitation of old and new.

Located 230m from BTS station, Wat Yannawa was erected during the Ayutthaya period and was formerly known as Wat Khok Khwai before being designated a royal temple during the Thon Buri dynasty, making it a good spot to learn about Thailand's history and cultural heritage.

During the reign of King Rama I, the humble ubosot was erected to house a sacred Ayutthaya-style Buddha statue and a Deva figure embellished with Himmapan animal-inspired motifs. Later, King Rama III had Krommuen Kraisorn Vichit restore the temple and the ubosot's walls and doors were painted with astonishing murals depicting the royal lantern festival, Thai-Chinese-style lanterns and kratong to honour top-notch craftsmanship and local wisdom.

At the front of the ubosot, King Rama III also built a life-sized replica of a white royal Chinese junk to pay homage to Buddhist precepts while recalling young generations of Siam's thriving marine commerce. Its design adhered to classic Ayutthaya-style art, in which the ubosot's curving base was formed like a junk to signify travelling over the cycle of birth and death.

The doorway is adorned with lotus and dragon motifs and a stairway takes visitors upstairs to a pair of white chedi, which were crafted to replace mainmasts. A captain's cabin on a deck is currently home to an archaic Lanna-style Buddha statue in the posture of subdued mara, which is believed to have been brought from Laos.

"In the past, the Chinese junks had three different colours to indicate their base. A royal junk in Siam is white, the green ones are from Hainan and the red ones belong to Teochew merchants. Sea commerce provided King Rama III with a significant amount of revenue, which he invested in temple renovations across the city. That is why he built a replica of a Chinese junk to serve as a memorial for future generations," said Thanat Bhumarush, tourism division officer of the Bangkok Metropolitan Administration, who served as a special guide. 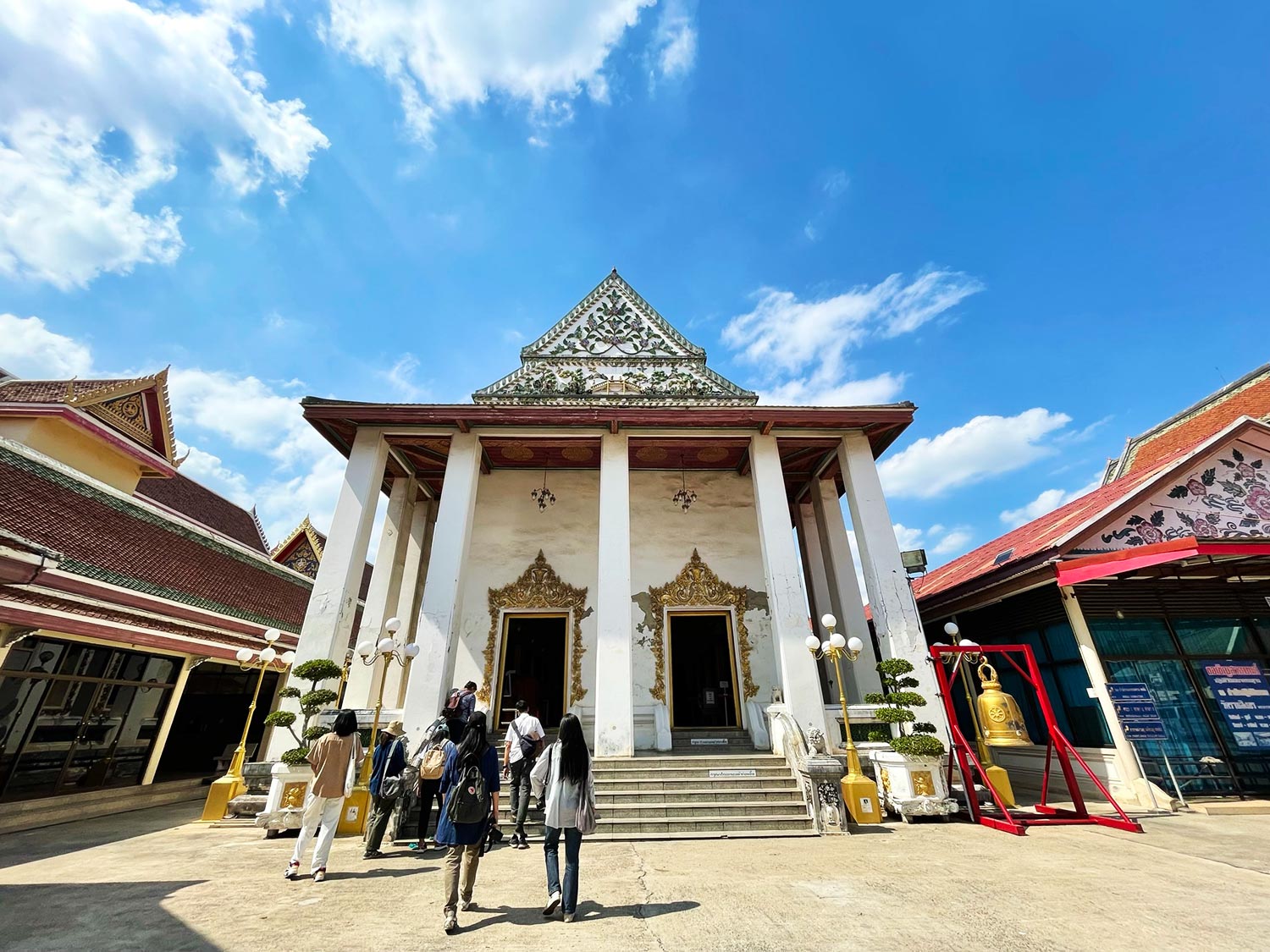 Wat Ratcha Singkhon was built during the Ayutthaya period. 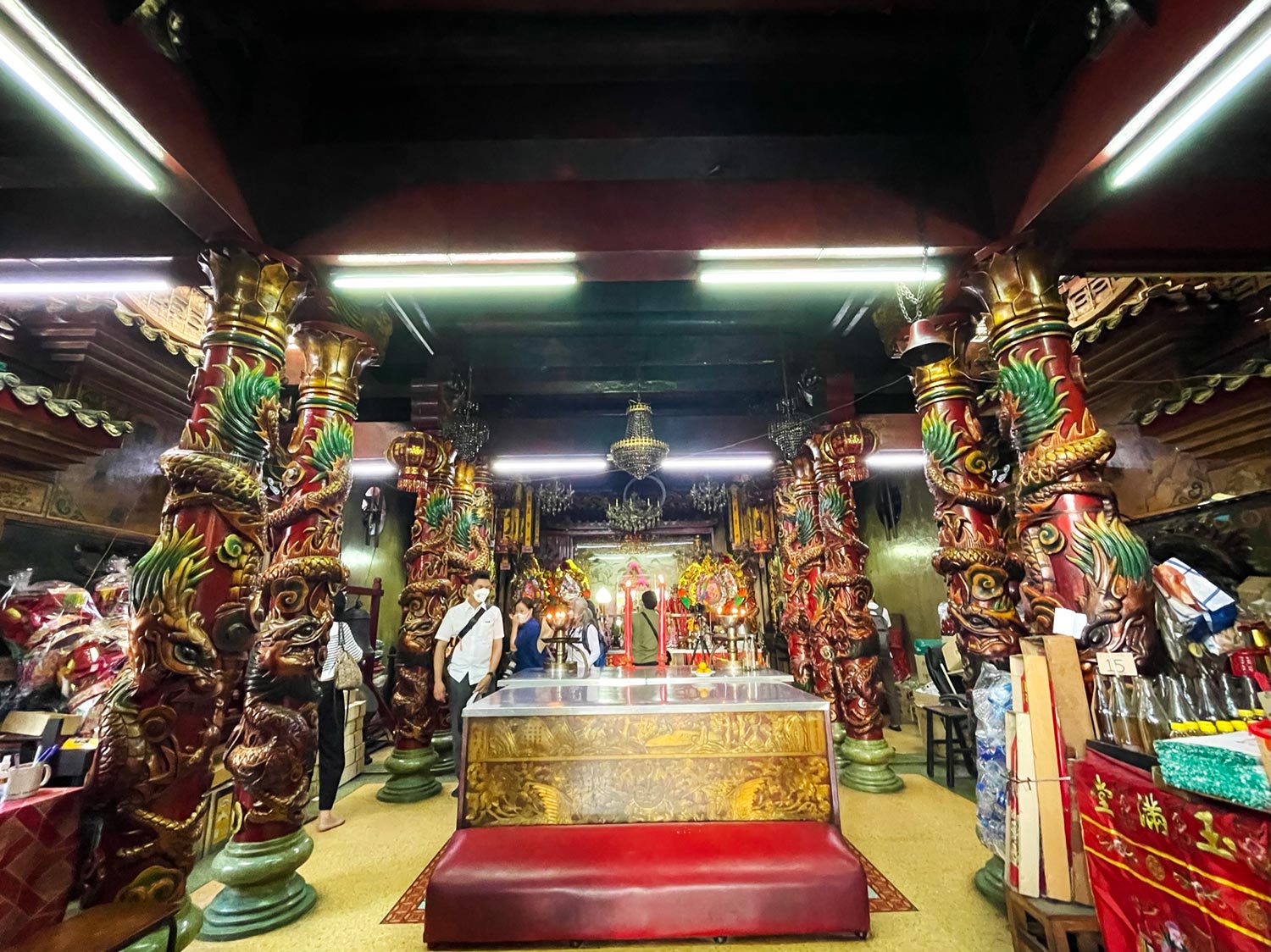 Landing on the ground, a recently renovated shrine, which was first built during the reign of King Rama III, stands nearby. Inside, pilgrims can pray to statues of Cai Shen (god of wealth), Guan Yin (goddess of compassion), three Buddhas, and protection deities Nezha and Guan Yu for safety, prosperity, happiness and luck.

Around 500m from Wat Yannawa, the modest Chao Mae Tabtim (Mazu) shrine sits between Charoen Krung 63 and 65 and has served as a peaceful retreat for Chinese descendants for more than 100 years. It was constructed by Teochew migrants during the reign of King Rama V, sporting crimson, intricately carved pillars with flying dragons.

Low-relief sculptures of a green dragon decorate the walls and its clerestory roof allows light and rain to flow in. Raindrops symbolise money, while a pond represents a palm that holds prosperity.

In the middle, a pair of guardian generals, Shunfeng Er, who can hear any sound on the wind, and Qianli Yan, who has a 1,000-mile eye, protect a sacred statue of Mazu (the sea goddess) and help monitor any impending dangers.

Not far from the Mazu shrine is Wat Suthi Wararam, which was originally built during the Aytthaya era and was known as Wat Lao. It was abandoned until Thanphuying Sutthi, a wife of Chao Phraya Wichien Siri (Men Na Songkhla), petitioned King Rama V for permission to restore it.

It has been supported by the Na Songkhla family and its two-storey Thai-style ubosot was modernised to exhibit modern religious art in order to draw the attention of young generations. Inspired by Wat Rong Khun in Chiang Rai, visitors on a Buddhist art path will be greeted by a huge white Buddha statue at the front of the ubosot, as well as an astonishing collection of white sculptures of mythological Himmapan animals displayed in a landscaped garden.

A main hall on the ground floor houses a white marble-like Buddha statue with a dhamma wheel set against a backdrop of a low-relief, red-and-gold mural portraying the Isipatana Mrigadayavan forest, where Lord Buddha gave his first sermon.

The walls feature the Tribhum (three Buddhist realms), with Lord Buddha serving as a core as the gilded black ceiling illustrates a group of angels listening to a sermon as well as whimsical animals living in the Himmapan forest. 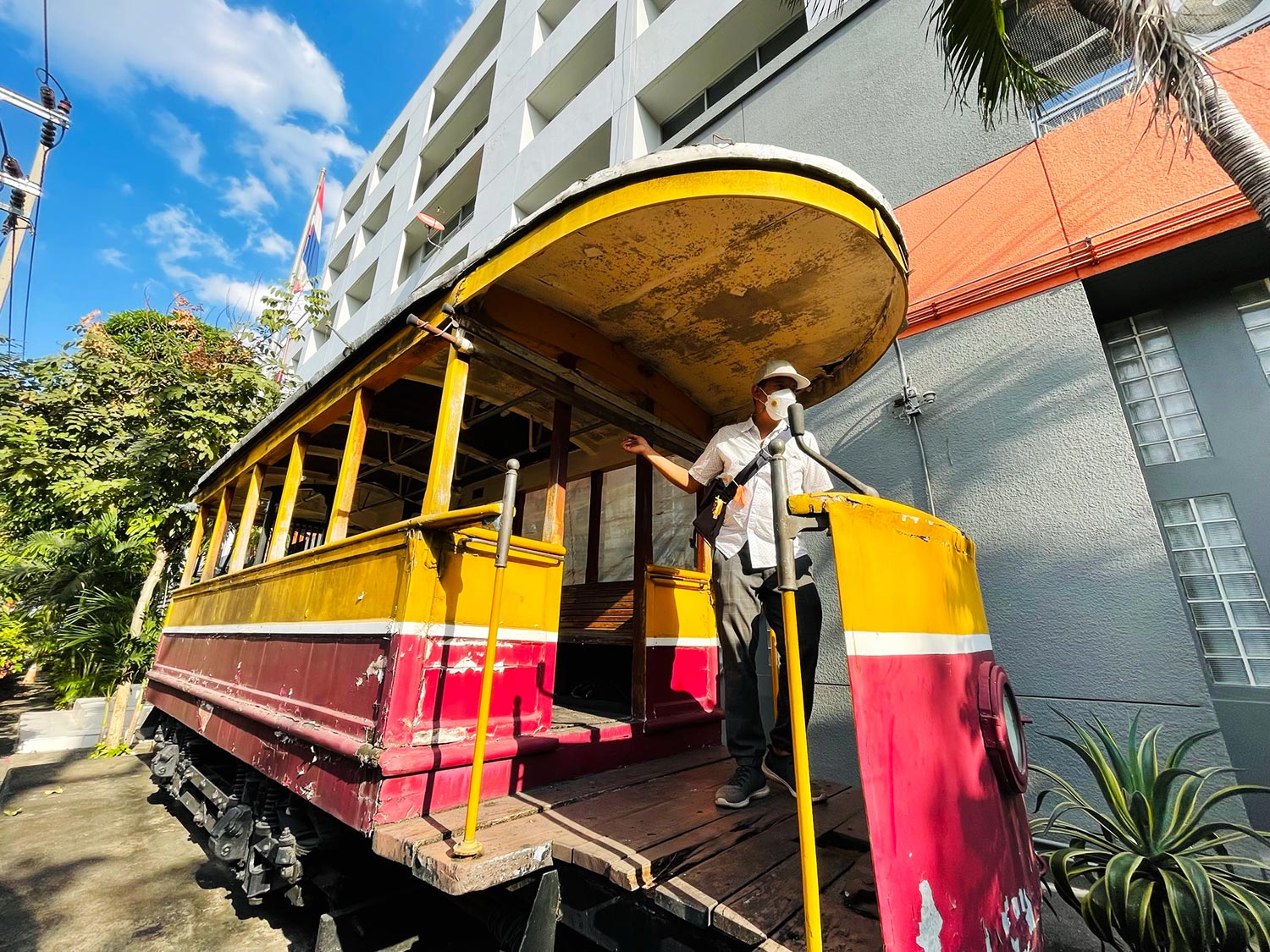 The Metropolitan Electricity Authority Yannawa Station has a vintage tram. 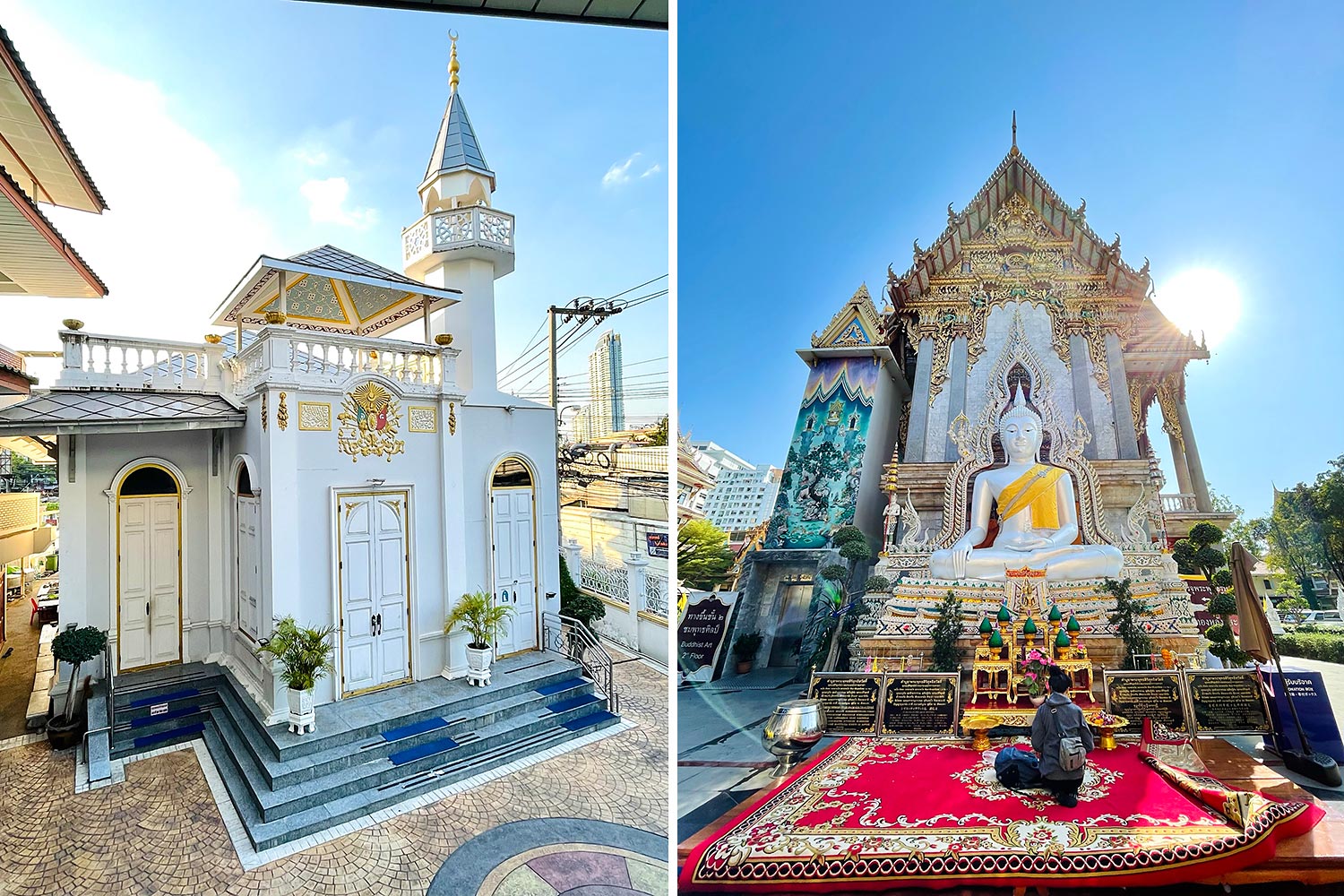 Ascending to heaven, another hall on the 2nd floor resembles an art gallery. The walls have morphed into a vast canvas, with paintings of four Buddhas and dhamma wheels depicting the birth and death cycle, daily modern life and zodiacs.

After figuring out how to go to nirvana, we came to study about the afterlife at the Bangkok Protestant Cemetery, which is located on Charoen Krung 72/5. Back during the reign of King Rama IV, a parade of foreign merchants, missionaries and officials marched to Siam, mostly from Europe, and some of them left their homeland to reside in the land.

King Rama IV recognised the importance of Western funeral customs and donated the land in the Bang Kho Laem neighbourhood to construct a foreign cemetery. Perched on the banks of the Chao Phraya River, the graves have name plates fashioned in baroque-style art.

Thanks to its tranquil position, this graveyard once became a swamp, covered with local plants, making it a verdant sanctuary for migratory birds from Siberia and a hot spot for bird watching around 40 years ago.

Browsing around, you can stop and pay respects to some big names who played major roles in shaping Siam into a modern country, such as Dr Dan Beach Bradley, who was the pioneer of Thai modern medicine and printing; Capt George Bush (Phraya Wisut Sakhondit), who laid the foundation for harbour industry to meet international standards; and Henry Alabaster, founder of the Sawetta Sila family who originated the Thai post office and surveyed for the construction of some major roads in Bangkok.

The British embassy was in charge of the cemetery for a time before it was handed to the Protestant Cemetery Foundation. Due to the city's development, it has experienced flooding during rainy season.

A five-minute stroll leads to Wat Ratcha Singkhon on Charoen Krung 74. This temple was erected during the Ayutthaya period before being restored during the reign of King Rama III.

The long walls of vibrant street art have escorted visitors to its ubosot, whose pediments are adorned with ceramic tiles, depicting a branch of cotton roses and Chinese deities crossing the bridge over a lotus pond that signifies the cycle of life and death, according to Chinese belief.

Inside, it is home to an antique bronze statue of Luang Pho Daeng, which is a mixture of Ayutthaya and Sukhothai art.

According to legend, the Luang Pho Daeng statue was rafted from Ayutthaya to Bangkok before the collapse of Ayutthaya, but the raft was destroyed by a torrent at Wat Ratcha Singkhon, and Luang Pho Daeng spent months in the river. The statue was later hauled from the river and revealed its beautiful rusty texture after the lichen was washed away.

We resumed our trek to Bang Uthit Mosque on Charoen Krung 74. Construction by Muslim migrants from Melayu began during King Rama V's reign and was completed during the reign of King Rama VI. The Turkish Cooperation and Coordination Agency of the Prime Ministry of the Republic of Turkey renovated this mosque in 2015.

Inside, visitors can admire beautiful classic Turkish-style architecture from the Ottoman Empire, which once served as a centre of the Muslim world, while its ceiling and walls are adorned with floral paintings and the Arabic alphabet.

At the Metropolitan Electricity Authority Yannawa Station on Tok Road, a display of a vintage tram took us back in time to when Thailand's first tram line Bang Kho Laem began operation during King Rama V's reign.

Trams were once drawn by horses before being powered by electricity to serve as major transportation in Phra Nakhon and other important cities such as Khon Kaen, Phuket, Nakhon Ratchasima, Lop Buri and Chiang Mai for 87 years.

The last stop was Asiatique the Riverfront, which has taken over the deserted Wat Phraya Krai. Thanks to the advent of Charoen Krung Road, this area was turned into a business hub and Captain Hans Neils Andersen established his firm Andersen & Co, the forerunner of the East Asiatic, on the temple's ground to operate a trading port, sawmills and warehouses.

During World War II, this land was seized by the Japanese army. It has since been transformed into a warehouse-themed community mall, with a 300m promenade becoming a popular vantage point for watching the striking sunset over the Chao Phraya River.