For British banker Roger Smyth, Australia’s border reopening could not come soon enough. After landing at Sydney Airport on Monday morning, he embraced his girlfriend Danni Wang for the first time in three months -- the pair now plan to marry during Smyth’s week-long visit.

"I tried every day to get here,” says Smyth, who met Wang in Tokyo before she moved to Australia to study. “We tried to make it on Valentine’s Day, I applied for an exception, but I got declined.”

Smyth was among the first passengers to arrive in the country as it allowed travel by double-vaccinated visitors, following almost two years of strict travel bans introduced to stem the spread of Covid-19. It was also a long-awaited day for the tourism sector -- which employed about 5% of the nation’s workforce and contributed 3% to the economy prior to the pandemic -- and was already reeling in early 2020 from devastating wildfires.

Tony Brown, who operates True Blue Sailing in Queensland’s Whitsunday Islands, said he was feeling “really positive” about the reopening, adding he was getting bookings all the way up to December this year. “That’s showing there’s a confidence level that hasn’t been in the marketplace for a number of years now,” he said.

Brown said it could take some time before the tourism industry was fully back on its feet, with entire sections of the booking infrastructure closing their doors during the pandemic. “The main sort of booking system that it all came from, Australia-wide, has basically just disappeared,” he said.

Tourism and trade minister Dan Tehan, speaking to Bloomberg Television from Sydney Airport, said he was confident that the tourism market would “rebound very strongly, very quickly” now the borders are open.

The cruise industry could open “in the coming weeks” if the federal government can win the support of one or more state governments, Tehan added.

The demise of the fortress Australia policy, which was highlighted when unvaccinated tennis star Novak Djokovic was deported earlier this year, is the latest step in the nation’s shift toward living with the virus.

The new approach includes managing the current outbreak of the Omicron variant without resorting to lockdowns, after the country hit a 94% vaccination rate for people aged 16 and over and rolled out its booster shot campaign.

There are now just a few governments clinging on to Covid zero policies, including Hong Kong, which is fighting a rear-guard action against spiralling infections with plans to mass test the entire city. New Zealand is also keeping its borders shut to tourists for now while it grapples with a wave of Omicron.

Trying to entice tourists to board such a long-haul flight is no easy task, no matter how appealing the destination. Tourism Australia last week launched a fresh A$40 million (US$28.8 million) campaign with the slogan “Don’t Go Small. Go Australia,” to run in Germany, France, Italy, Canada, the United States and the United Kingdom.

“We also considered the popular destinations and cities which have been impacted the most by the pandemic and put them in the spotlight,” Tourism Australia Chief Marketing Officer Susan Coghill said in a statement.

The number of arrivals from China will offer an insight into the state of relations between Australia and its largest trading partner. Ties were frayed even before Prime Minister Scott Morrison called for an independent inquiry into the origins of the virus, infuriating Beijing which responded with punitive trade actions on Australian commodities from coal to barley, lobsters and wine. 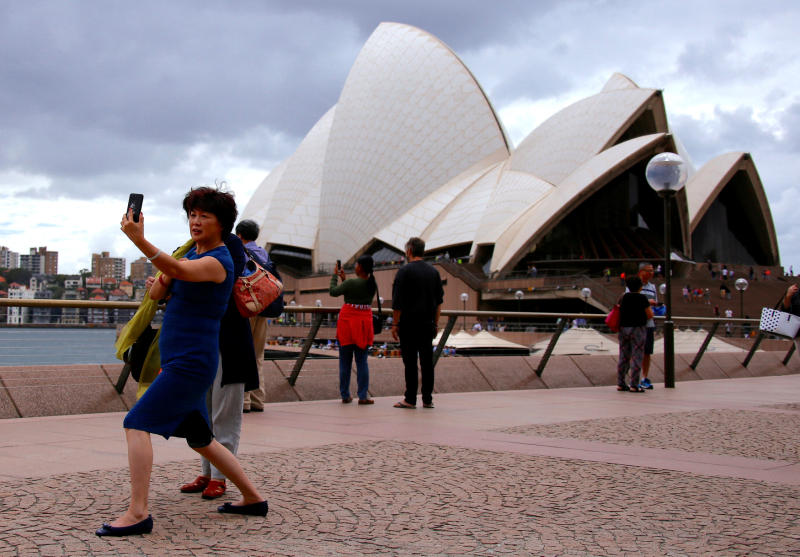 A Chinese tourist poses for a 'selfie' in front of the Sydney Opera House in Australia, March 8, 2017. (Photo: Reuters)

The reopening will be a major boost to Australia’s key services industries, with a potential influx of students, working holidaymakers and skilled visa holders offering the prospect of filling shortages in pockets of the labour market.

“The wait is over. There’s some more than 1.2 million people around the world who are visaed up and they can come,” Prime Minister Morrison said ahead of the reopening. “To tourists all around the world, pack your bags, come and have one of the greatest experiences you could ever imagine.”

Visitors will soon even be able to visit Western Australia, where Ningaloo Reef and the Margaret River wine region are among leading attractions. The state, the centre of the country’s lucrative mining industry and home to more than 2.6 million people, will finally end its own strict Covid-zero policy and tight domestic and international border regime on March 3.

Premier Mark McGowan on Friday announced the date for lifting of border restrictions, acknowledging the virus was already in the state and “we cannot stop its spread.”

McGowan promised A$77 million for industries that were affected by the border delay, including tourism companies, but even with the help many operators had “struggled to survive,” WA Tourism Council chief executive Evan Hall said in a statement.

“It will take a long time for tourism businesses to recover,” he said.