A cruise along the Thai riviera
Travel

A cruise along the Thai riviera

Despite an oil spill off its coast earlier this year, Chumphon continues to be a popular spot among scuba divers, both experienced and beginners, hoping to see a giant shark whale at least once in their life. The famous diving sites of Koh Ran Ped and Koh Ran Kai have been recognised for the beauty of marine ecosystems, with a colourful carpet of coral reefs stretching as far as the eyes can see.

This seaside province joins Phetchaburi, Prachuap Khiri Khan and Ranong as part of the Thailand Riviera initiative, which began in 2018 with the goal of promoting coastal tourist attractions on the western coastline.

However, it's still seen as only a passage for holidaymakers to get south, leaving beaches unspoiled and the turquoise waters pure, which makes it an ideal weekend retreat from the hustle and bustle of the big city.

It was a dreary winter day, with grey clouds thwarting my plan to photograph stunning blue skies and bask in the sunshine. My companion and I travelled for six hours to Noen Sai Ngam (Thai Sand Dune), along the shore of Pathiu district. It's a hidden gem off the beaten path for local folks and tourists, but it's now included in the list of new coastal attractions, as part of the Scenic Routes Project.

With the cool breeze sweeping in, I found myself resting on the pristine silky beach, with the sky brushed with grey streaks. I realised I wouldn't be able to see the sunset this evening, but the view in front of me was as beautiful as a painting.

Natural phenomena formed the sand and coastal dunes around 1.8 million years ago as ice in other parts of the planet began to melt, leading to higher sea levels. After that, the sea level dropped and the monsoon trough settled over this coastal area, bringing strong winds with it. 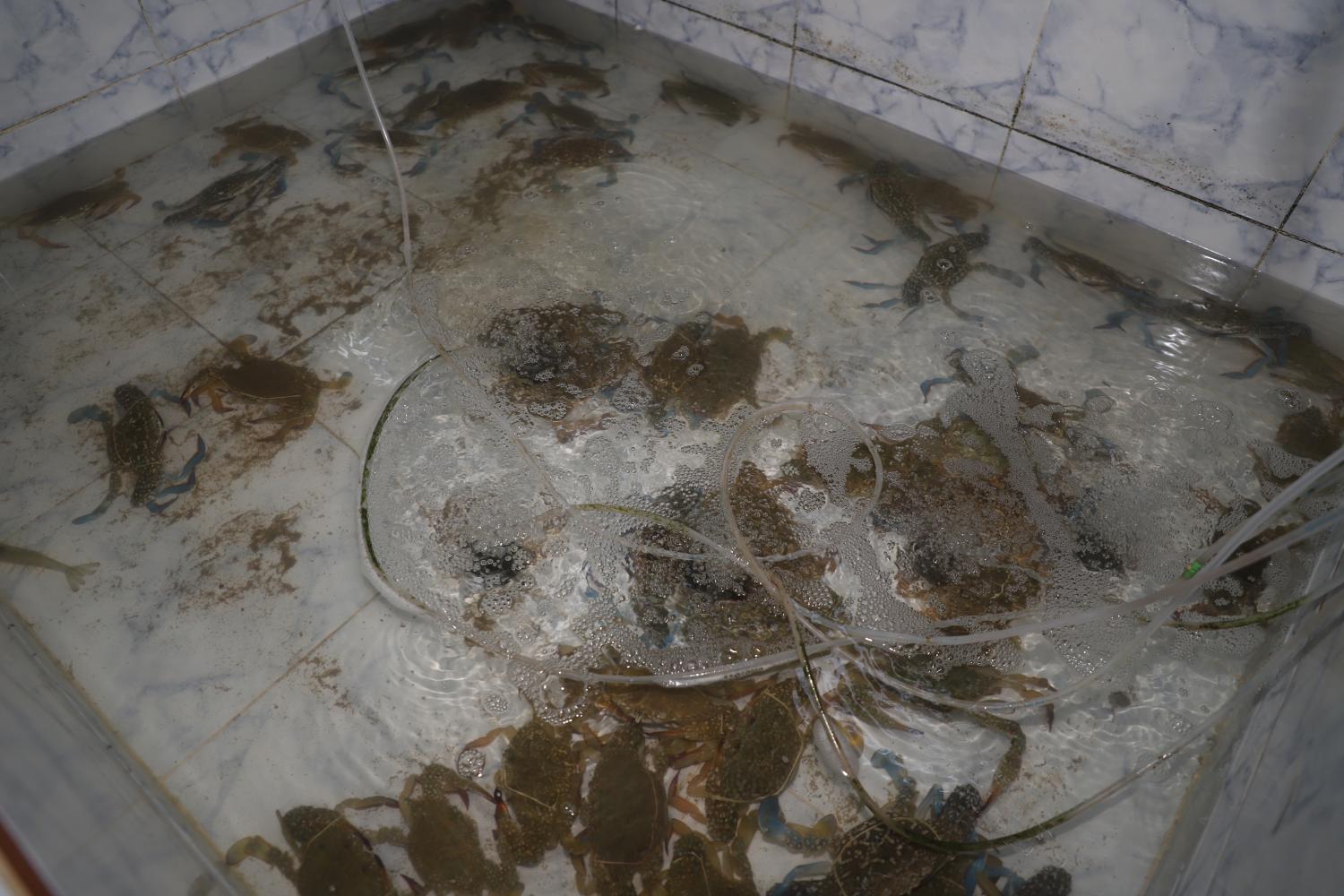 The beach is broad and there are no boundaries. Friction between the grains, which are pushed by the wind and lead to coastal dunes or sand dunes, may cause noise while strolling.

On the other side, local artists show off their creativity by creating a collection of sand sculptures at the Rak Chumphon Tiew Chumphon Na Jud Chom Chan at the Noen Sai Ngam festival, while local vendors sold a variety of local dishes, snacks, coffee and healthy drinks. It was a collaborative effort between the Chumphon Provincial Agriculture and Cooperatives Office, the Department of Tourism and local officials to bring colours to the resort town.

The next morning, the rain had stopped by the time I woke up to a nice vista of the Gulf of Thailand and fresh air. I arrived at the Ban Mai Chai Klong Homestay after a 10-minute drive from my resort and observed the traditional ways of the fishing village, based on sustainable living.

The homestay is the brainchild of veteran fisherman Somchok Pontorat, who thought outside the box and turned his waterside wooden house into a lodge offering custom-designed homestays with creative workshops for overnight stays and day trips. He hopes to encourage local villagers to conserve the traditional way of fishing villages and marine ecosystems while also raising income for his community. 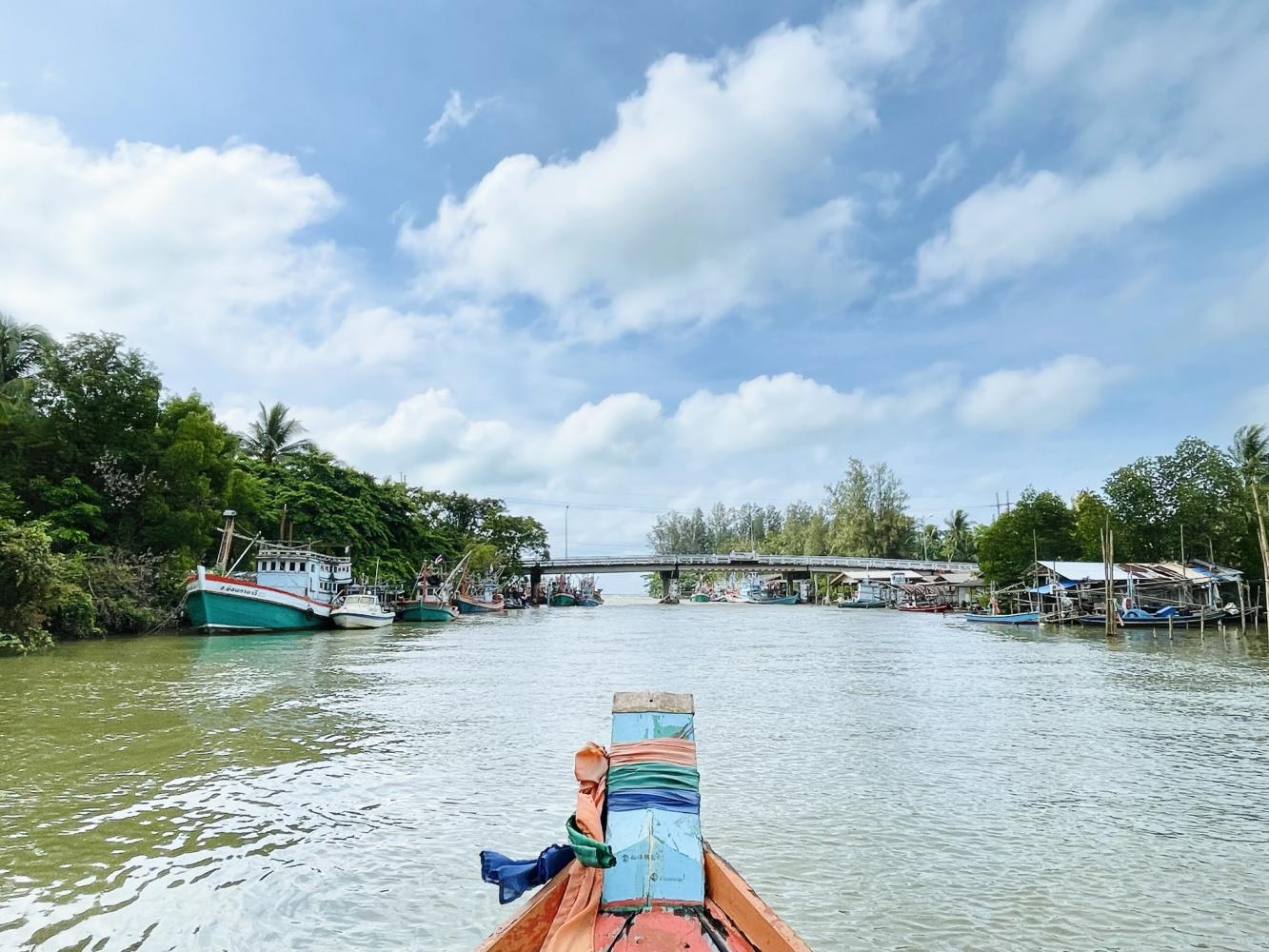 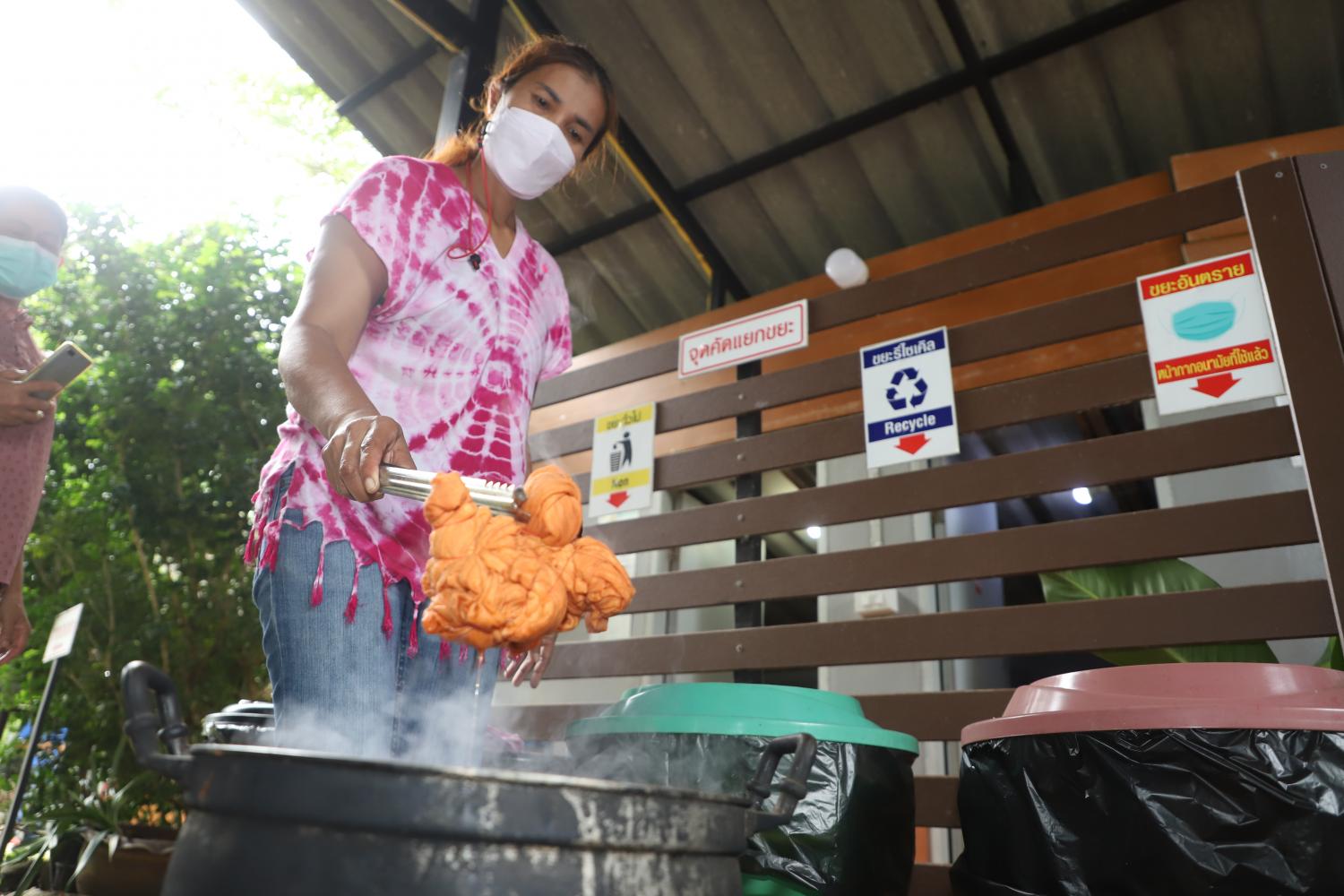 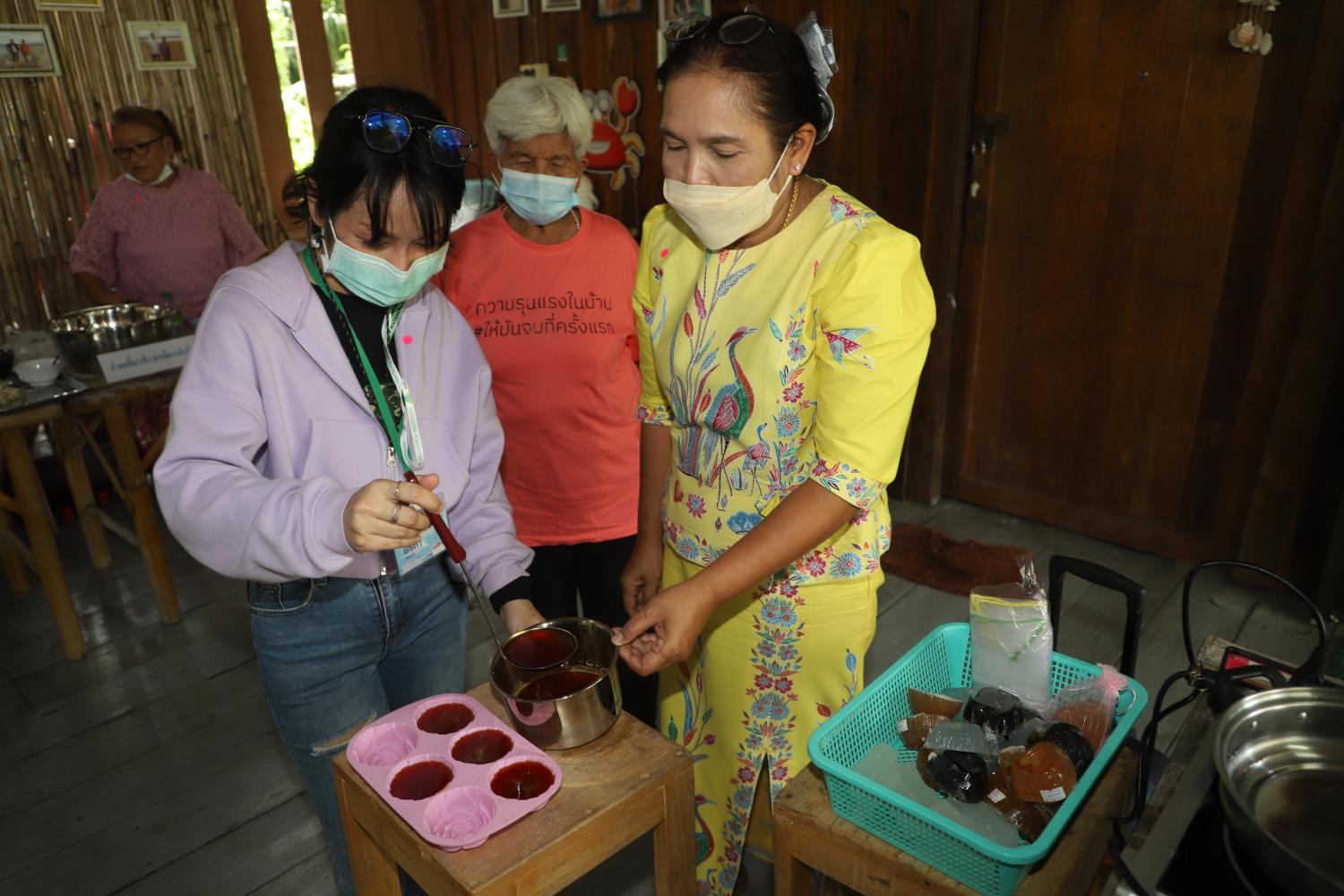 "I'm a fisherman, who has dedicated myself to environmental conservation on a voluntary basis. In 2009, I recognised the potential for green tourism to generate income for our community while also funding our project. Some people thought I was insane at the time, so I began by opening my house to welcome tourists who wanted to experience a way of local life and get closer to nature. I also crafted a recreational programme like a cruise and cooking class so that I could share experiences with visitors. Fortunately, my idea received positive feedback and tourism has become our primary source of revenue," said Somchok Pontorat, who serves as the president of the Tambon Bangson Community-based Tourism Enterprise.

"We have 40 family members and five residences that can accommodate 100 people. We have maintained our way of life and had a steady supply of food, so the Covid-19 pandemic hasn't had a significant impact on us. Around 80% of residents grow rubber plants and oil palms, 15% are fishermen and 5% are involved in trade and labour."

Five years ago, Somchok set up a crab bank at his house to educate local villagers about the life cycle of blue swimming crabs and preserve their food source and marine ecology. It's an experimental project, in which a group of fishermen can deposit berried female crabs they catch in hatcheries and wait 25-30 days for the crabs to spawn before selling them in a local market.

A normal egg mass contains between 2-8 million eggs. With the high yolk content, they will start out orange, then become brown when the yolk is digested and the eyes develop. The eggs hatch into zoea larvae after one or two weeks and only one egg in a million survives to mature as the process takes four to five months.

After the brief fisheries lesson, we boarded a classic wooden boat and pretended to be expert fishermen on a 30-minute ride through the mangrove jungle. Veteran trawlers had just concluded their routine, and a procession of colourful wooden boats were moored along the banks, while a group of teenage fishermen gathered in front of their homes to demonstrate their talent.

Our boat rode a rising tide to the estuary to release some young crabs into the sea while the sky was once again full of rain clouds and fierce gusts urging us to return to shore. Somchok has also allocated a living room to local artisan Anong Nallaong and her crew to conduct a fun workshop on how to tie-dye T-shirts, scarves and dresses using natural colours extracted from local plants such as mangrove leaf, mangosteen leaf and peel, robusta cherry bean, molasses and curcuma.

We also had a class on how to make our own herbal soaps using coffee, curcuma powder and honey, which can help to cleanse, soften and brighten skin while also reducing acne. Our tummies grumbled, signalling that lunch was approaching. 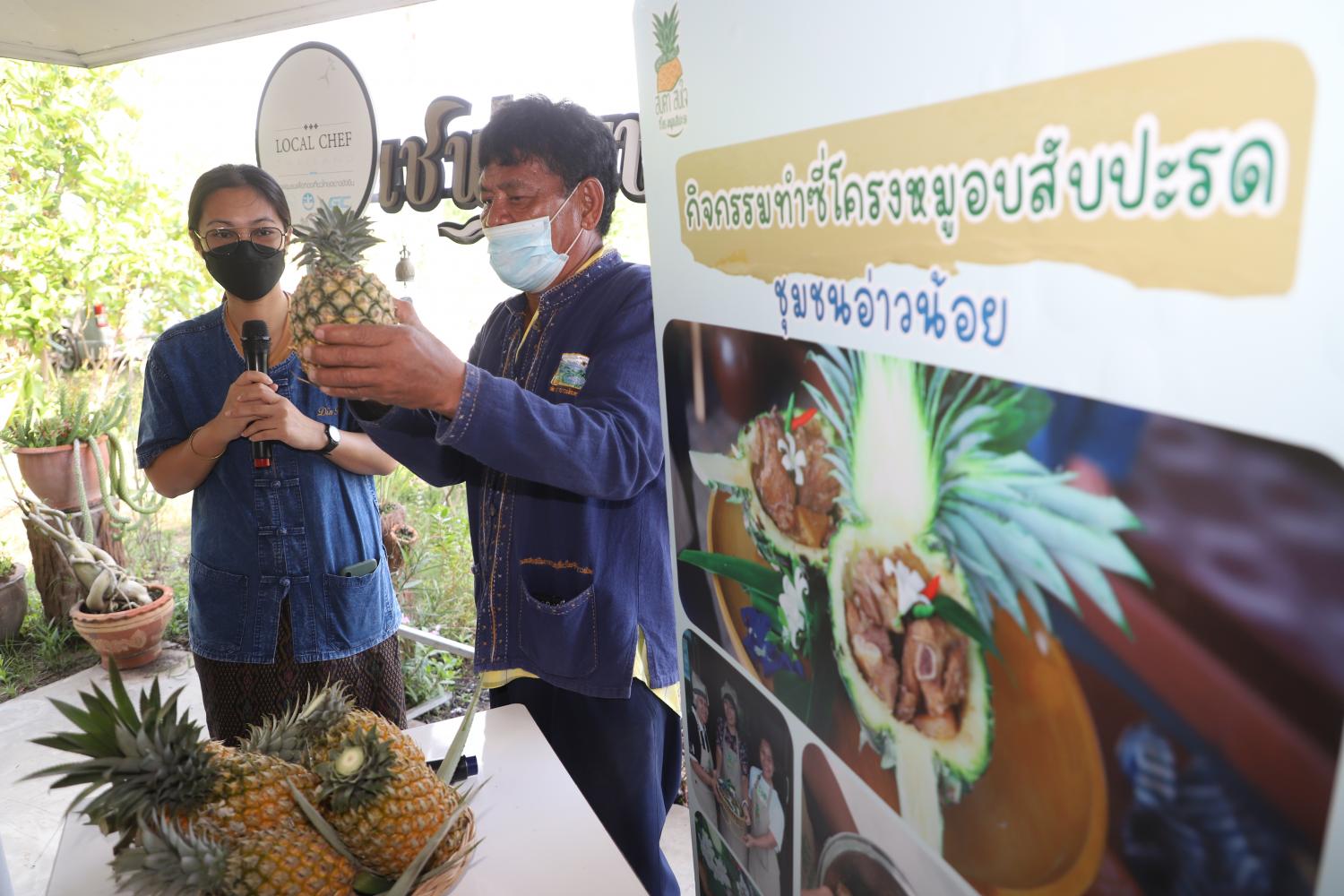 Our adventure came to an end at Din Thai Organic Farm and Homestay in tambon Ao Noi, which is home to the Prachuap Khiri Khan Community-based Tourism Association's headquarters. It belongs to Angkana Pipatsuksakul, a former office worker in Bangkok, who returned home in the hopes of turning her village into an environmentally friendly tourist attraction.

"I acquired a great job in Bangkok, but I had always dreamed of being an agriculturalist. Ten years ago, I quit my job and left the fast-paced city life to return home after getting an idea of how to add value to our agricultural goods by capitalising on the green travel trend in bringing tourists back to the basics," Angkana said.

"We grow chemical-free pineapples, vegetables, mangoes and bananas, so we can turn our food into organic products like dried bananas and pineapple-based dishwashing solutions to raise our income."

She offers a homestay programme in which visitors may spend the night at her home and eat local dishes prepared by her mother using fresh produce from her own backyard and neighbourhood to celebrate local wisdom and rural life. 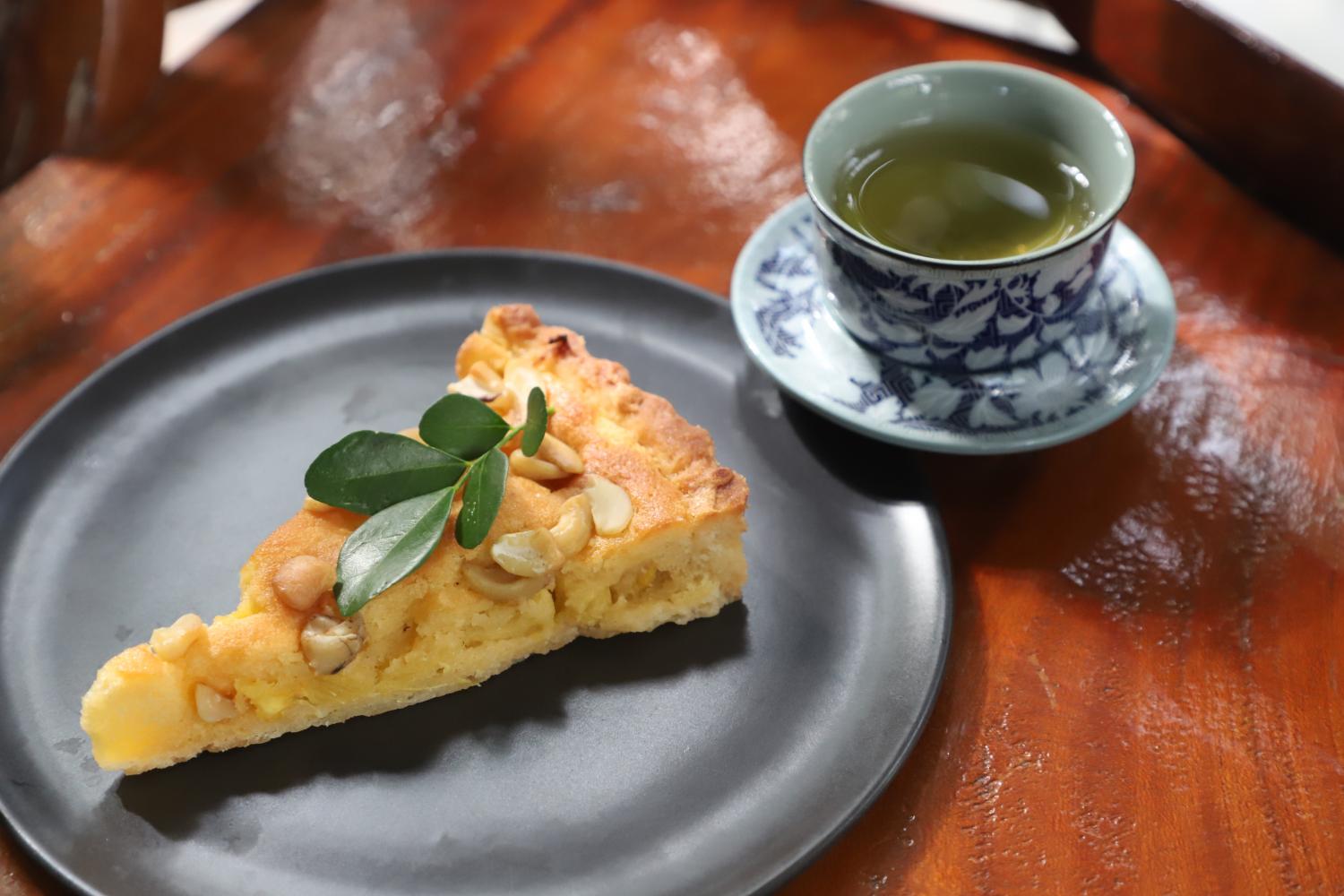 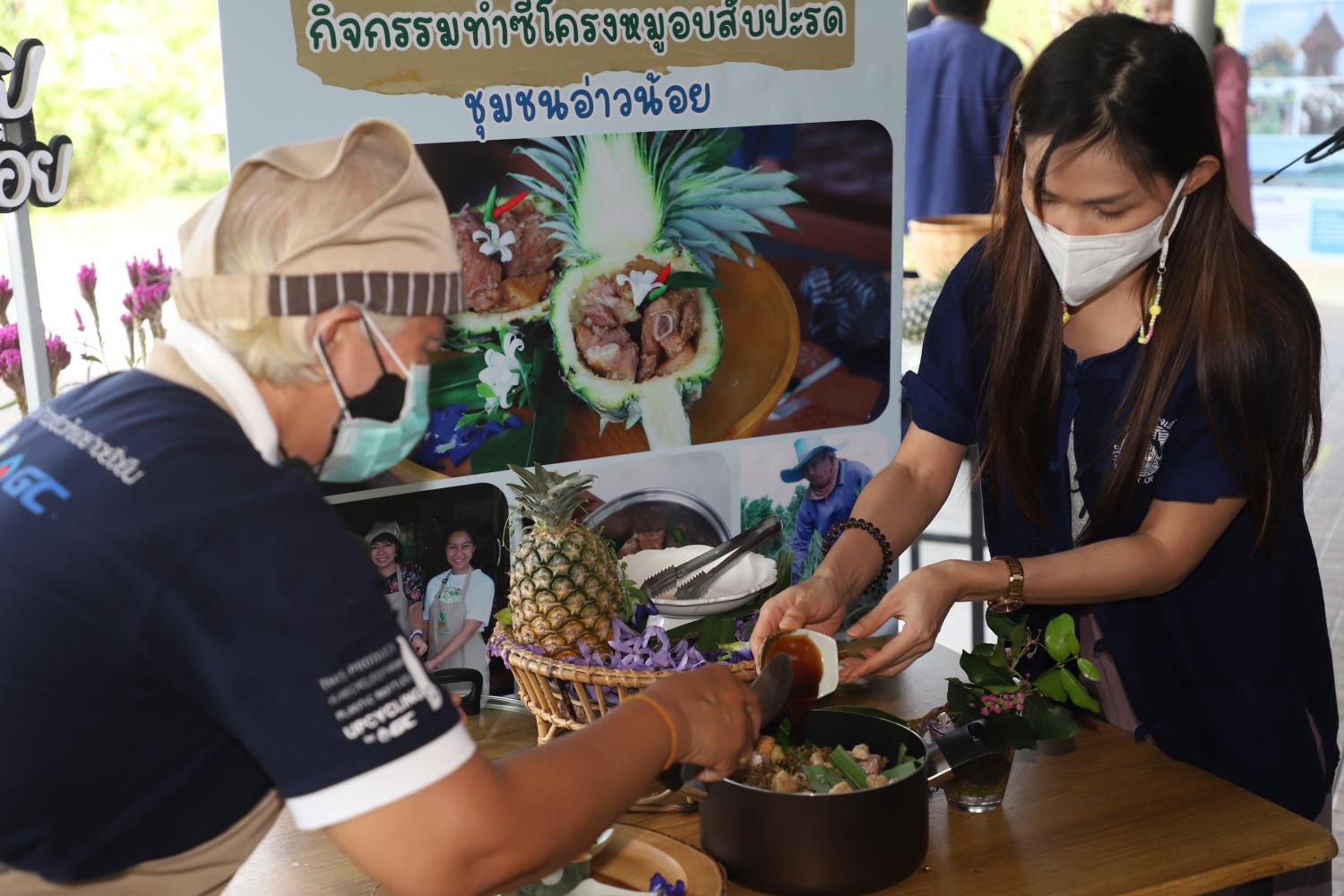 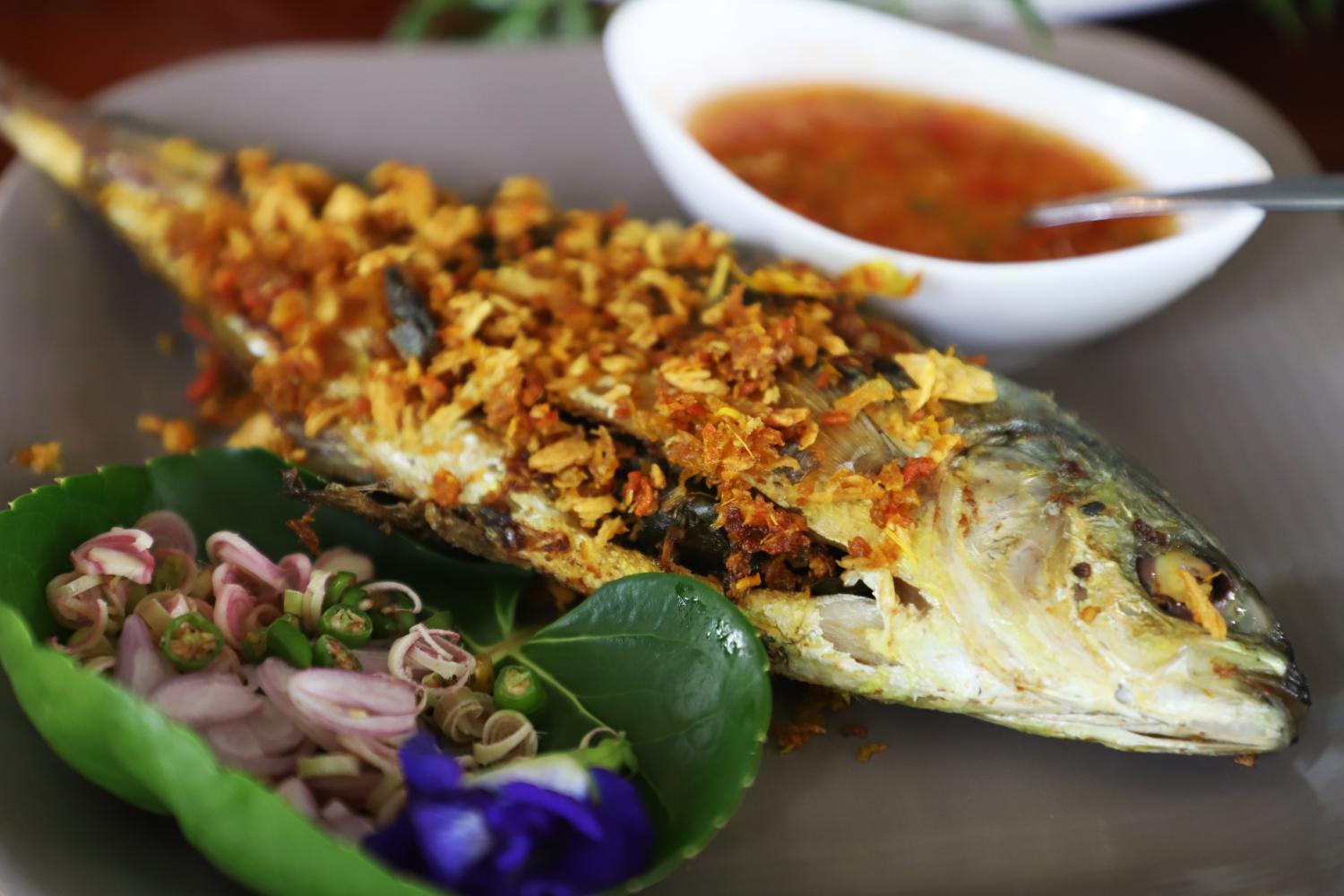 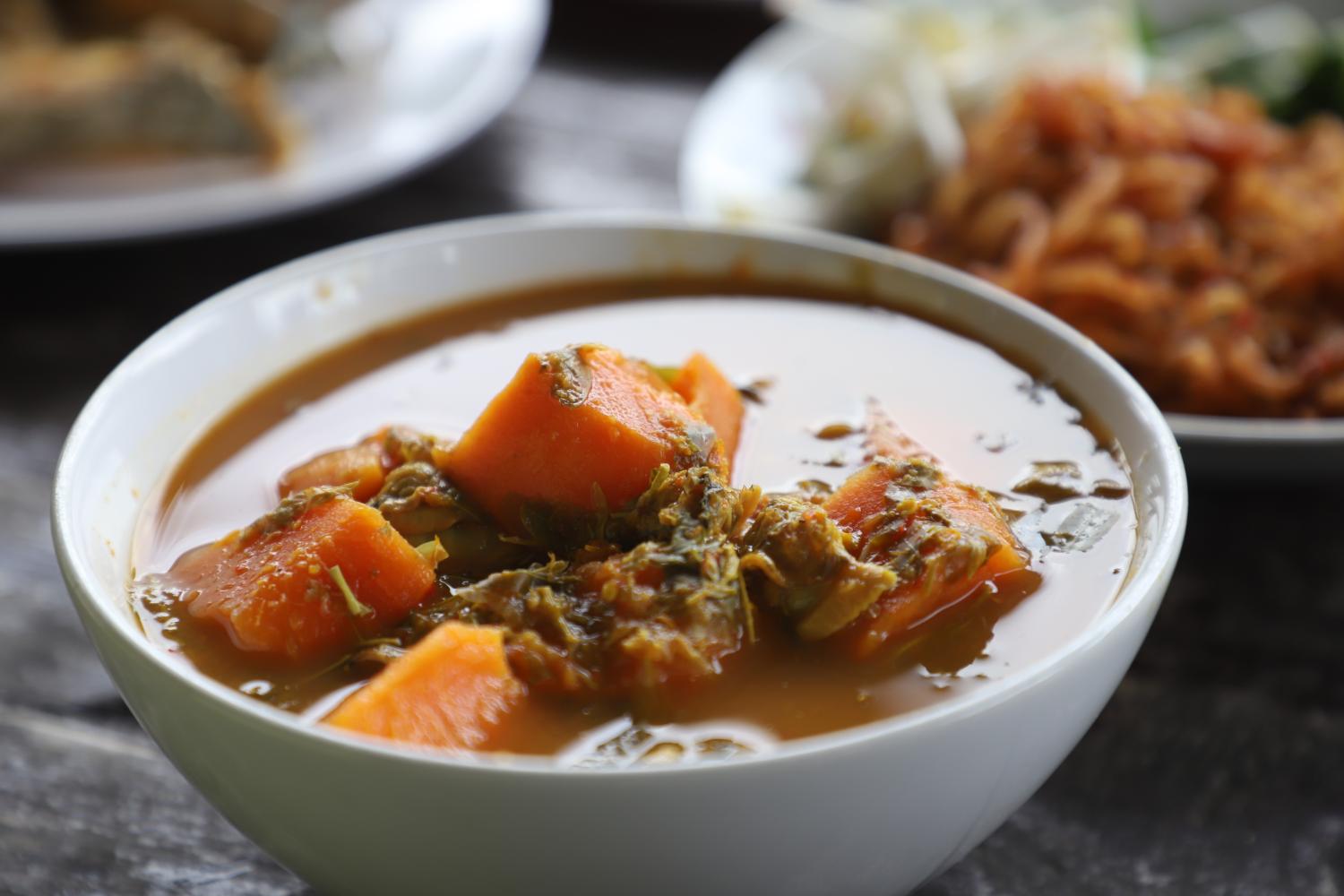 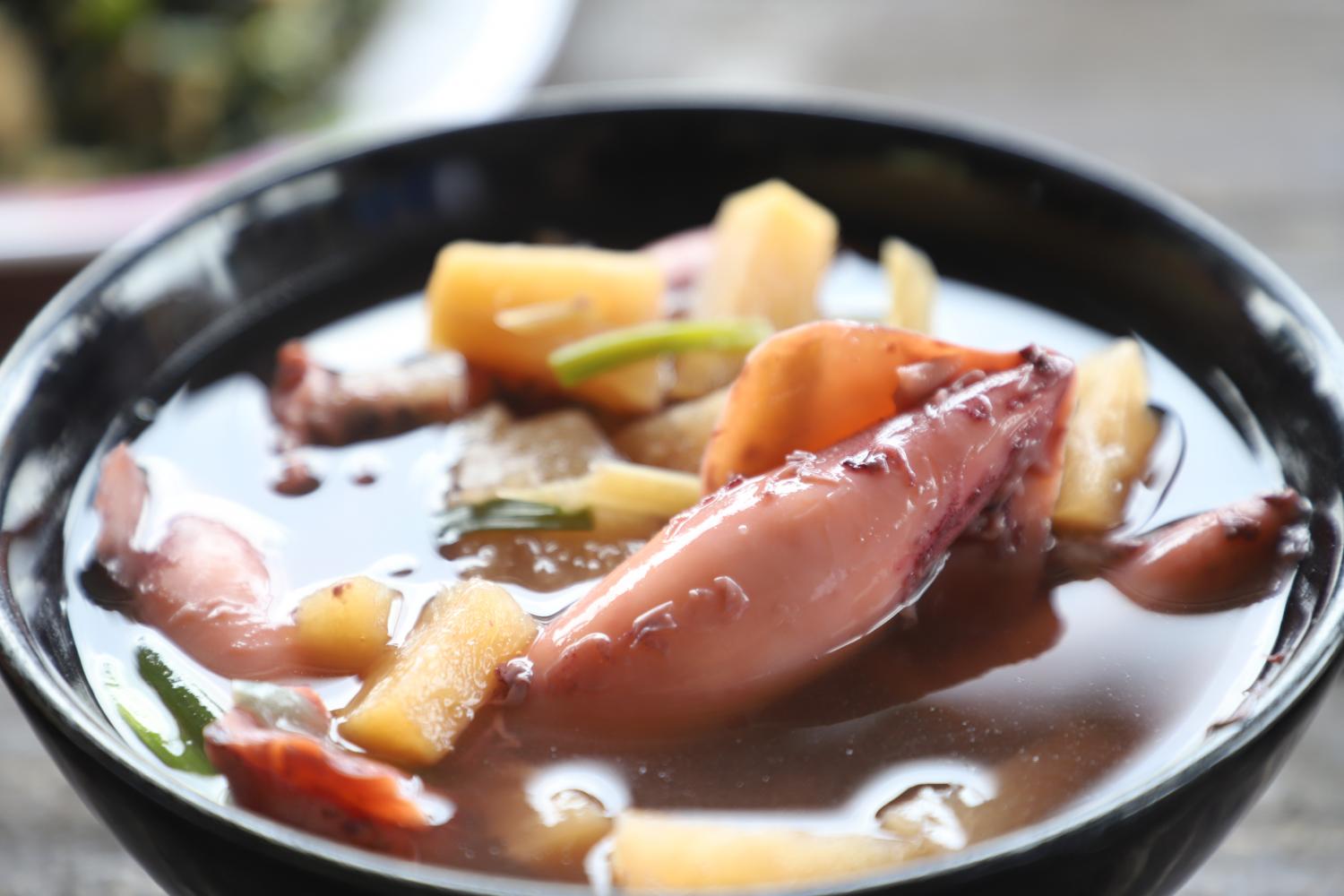 Those who have time like us can sign up for a cooking class to learn how to make spicy roasted pork spareribs with pineapples, one of the recommended dishes from the Local Chef Thailand campaign.

Not far from Din Thai Farm, Chamnuan Phuekphut, 67, has transformed his 60 rai pineapple plantation into a learning centre for those interested in crop rotation. Instead of monoculture farming, he used his 40 years of experience to maximise the number of agricultural goods he produces by cultivating pineapples and bananas of varied type, as well as oil palms. During a farm tour, he shows visitors how to grow and pick pineapples as souvenirs.

"The majority of the terrain in Prachuap Khiri Khan is covered with sandy clay loam, which absorbs water effectively and is suitable for growing pineapple, which requires watering at least twice a month. It takes 14 months for them to reach maturity and yield fruit. I've now planted five different types of pineapple, including the famed Batavia pineapple from Prachuap Khiri Khan, which has a bright and sweet texture. The factories have used them to produce cans of pineapple for export to many countries. Other fruits will be sold in my orchard and at a local market," Chamnuan said.

Angkana has also teamed up with local agriculturists and fishermen to craft an eco-friendly sightseeing tour programme that includes stops at Ao Noi fishing village, Baan Prachuap Chok to see how a group of homeless artisans carved a collection of coconut shell containers, Ang Hin reservoir and a smart pineapple orchard powered by solar cells. 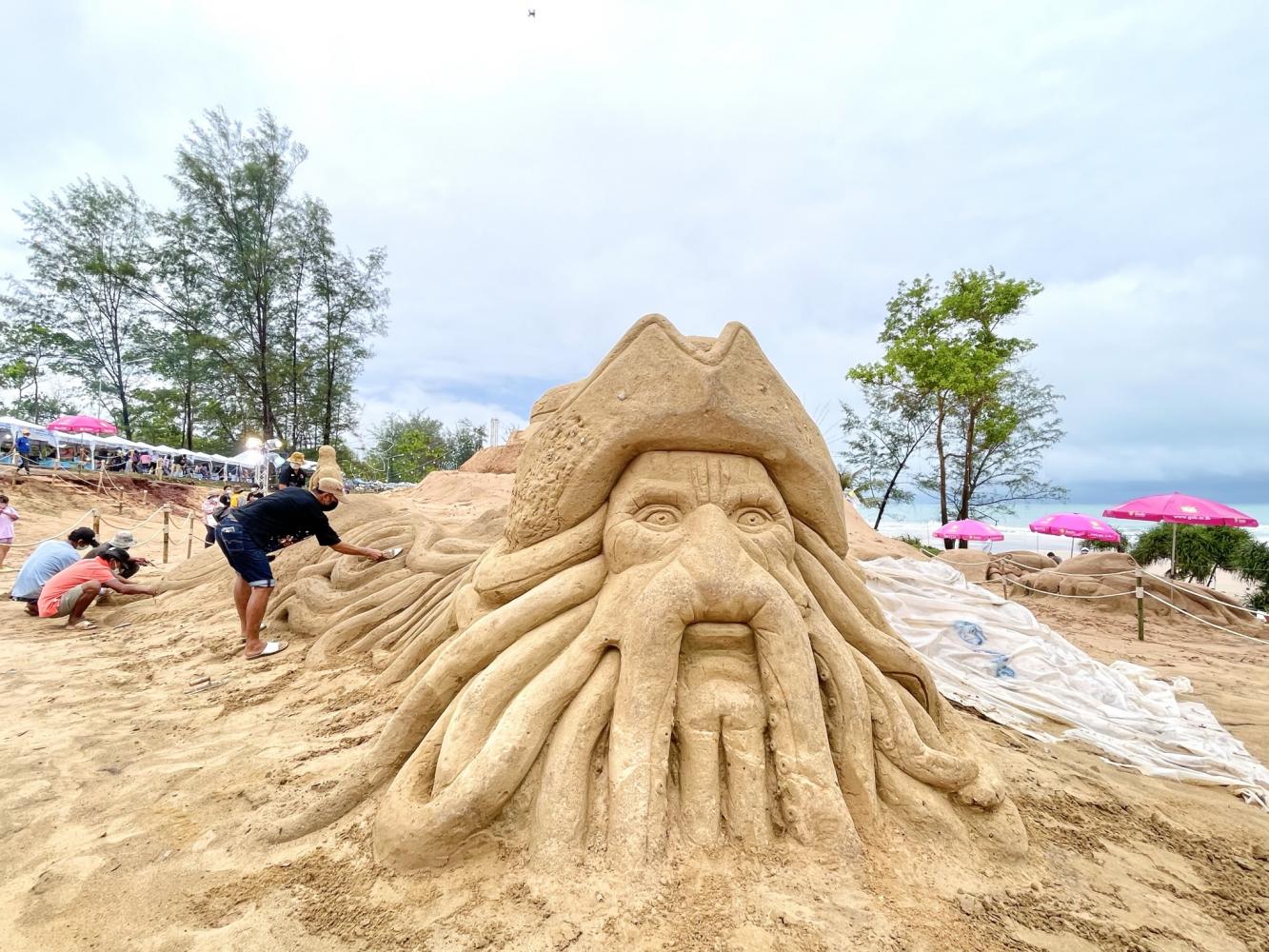 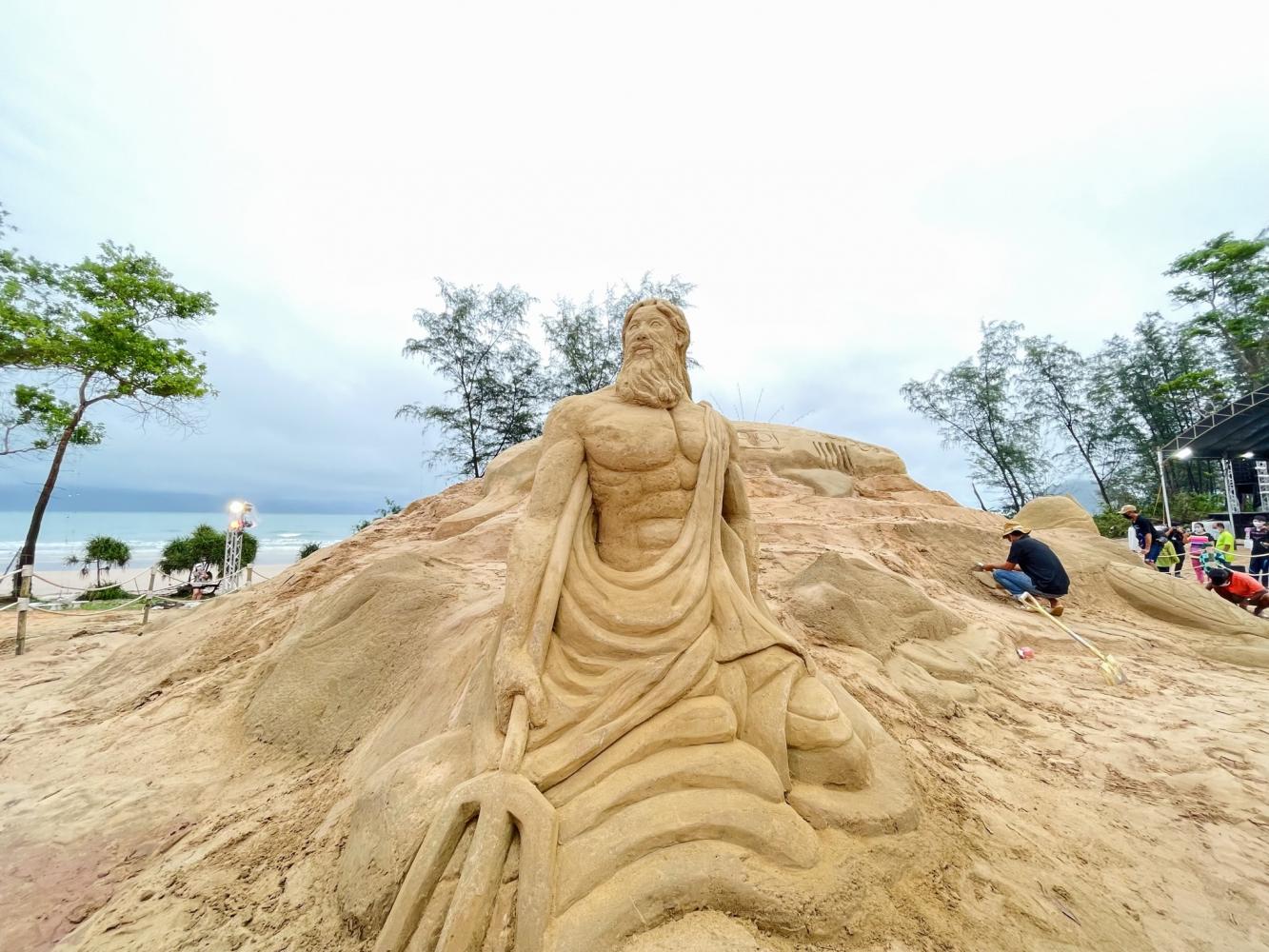