Sitting on the banks of the Chao Phraya River, the Samphanthawong district is home to a large Chinese community and the Sampheng neighbourhood, which once functioned as Bangkok's primary commercial core. Browsing around, visitors can see historic Chinese shrines with striking architecture nestled among clusters of classic shophouses, transporting visitors back to the early Rattanakosin period when Chinese sea merchants played a major role in the import and export industry.

Just 500m from MRT Sam Yot station, we wove through a labyrinth of stalls and shophouses to Soi Wanit 1, where Chun Siang Cho Sue Shrine is concealed off the tourist path. It stands at the end of Trok Hua Med, which was once lined with ornamental knobs of Thai columns and jewellery stores.

This modest shrine was constructed in 1887 by Hokkian migrants and underwent several renovations until 2009. Based on feng shui, there are two ponds behind the entrance and the walls are decorated with colourful tiled stuccos of a white tiger and green dragon to serve as guardians.

The shoulder poles are attractively carved to resemble auspicious plants and animals such as a lotus, peony, lion, dragon, bat, deer, horse and elephant. Inside, it houses a gilded carved wood statue of Lu Dongbin holding an elixir bottle, a fly whisk and a sword to ward against evil.

According to Taoist beliefs, Lu Dongbin was a great scholar during the Tang Dynasty, who excelled in magic and was tested 10 times before joining the Eight Immortals. Pilgrims come to him and pray for success in school, business and exams.

There's an old wood sculpture of Guan Yin, paintings depicting a story of Guan Yin and the protective deity Nezha as well as a joss-stick pot, which was used in King Chulalongkorn's royal funeral. 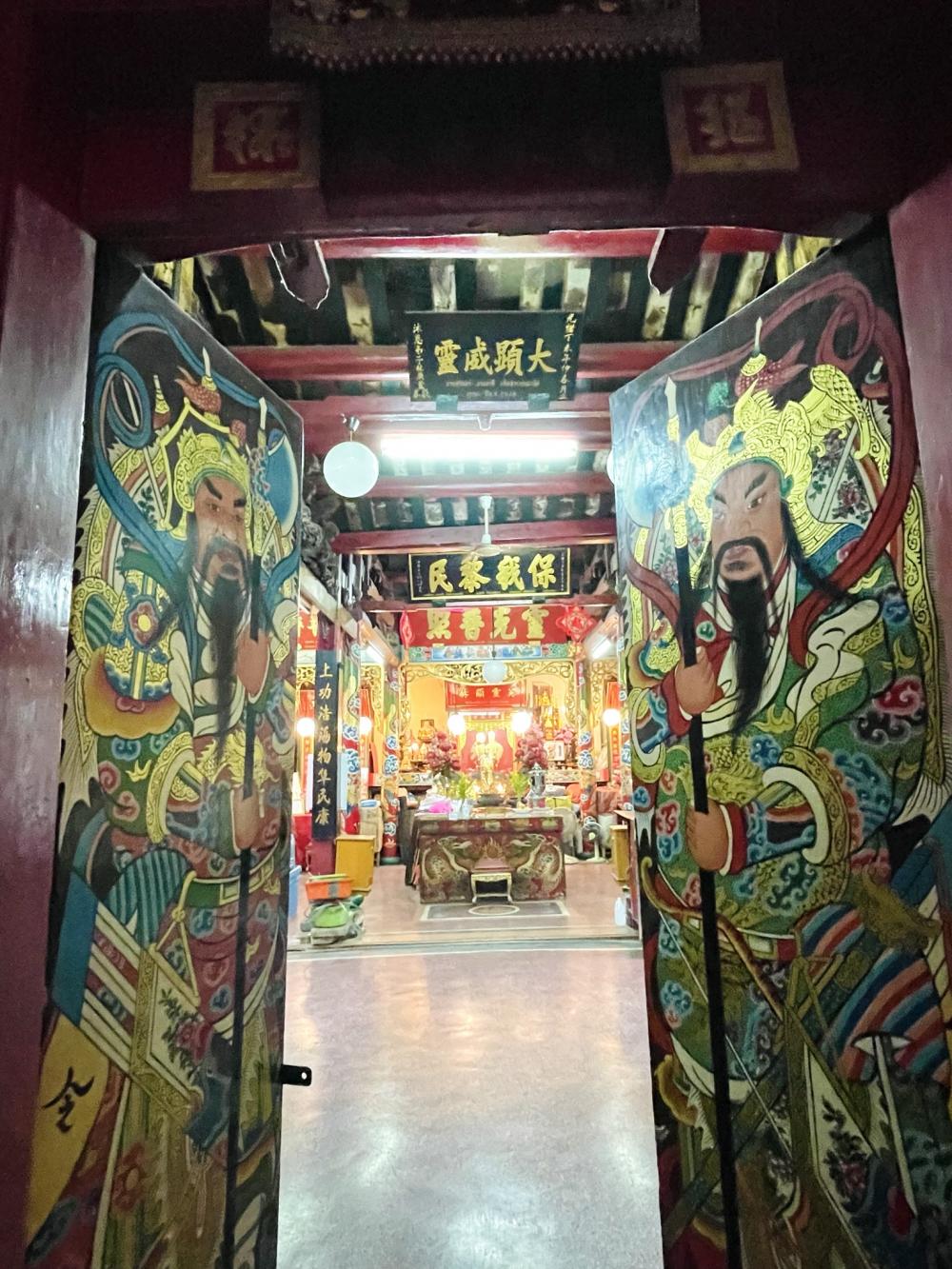 Chun Siang Cho Sue Shrine was built in the reign of King Rama V to honour Lu Dongbin of the Eight Immortals. It is located in Trok Hua Med. 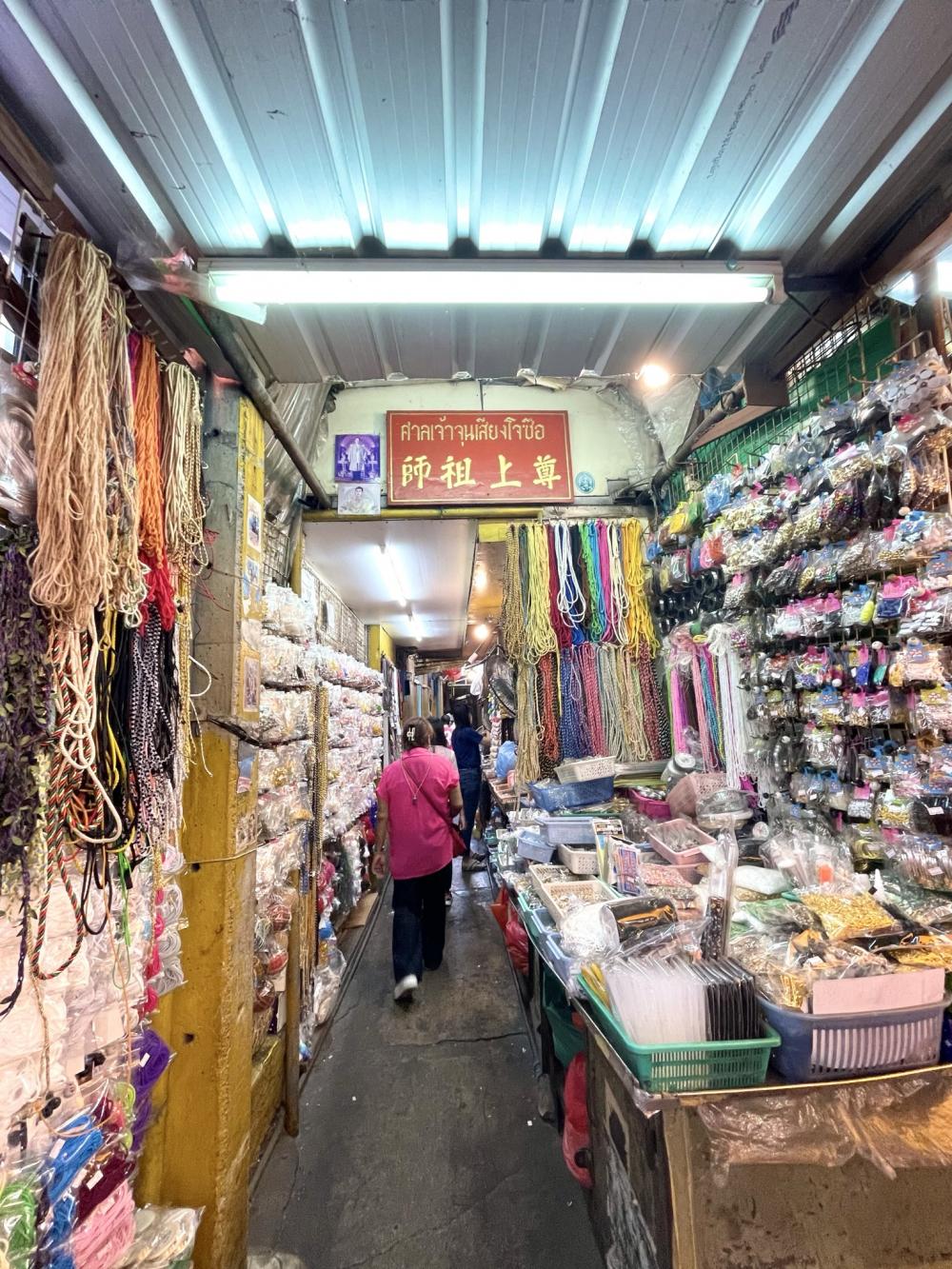 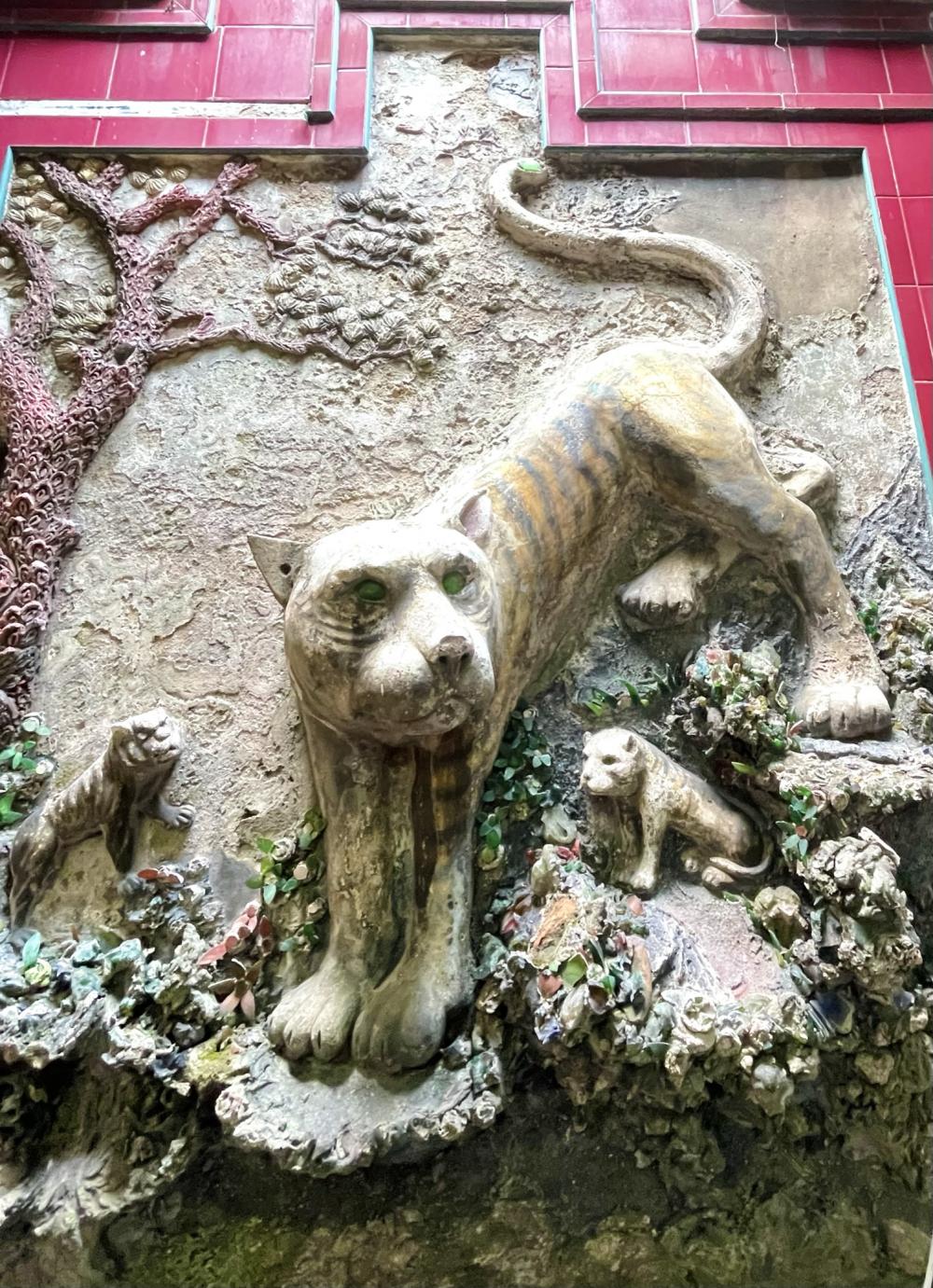 We crossed Ratchawong Road and headed down a narrow lane to Bun Samakhom Vegetarian Cafeteria on Trok Krai. This is the first vegetarian cafeteria in the Samphanthawong district, built over 15 years by Teochew merchants.

It was given a name by King Rama V as the original structure was fashioned out of wood and went through multiple repairs before being enlarged to a two-storey compound. Its current design is a hybrid of Thai and Chinese art, with a structure reminiscent of a Thai scripture hall and interior decorations based on Hokkian-style architecture.

Visitors can ascend stairways on the left and right as the walls sport a collection of astonishing tile murals that depict Chinese opera artists performing Three Kingdoms. It uses the chien shi technique -- cutting tiles into small pieces and putting them together to create a mural.

Behind the entrance, towering redwood pillars are embellished with dragons soaring into the sky and wood shoulder pillars are sculpted to resemble lions, dragons blowing water and deities riding the waves as well as auspicious plants and animals like grapevine and squirrel to showcase elaborate Hokkian-style craftsmanship. 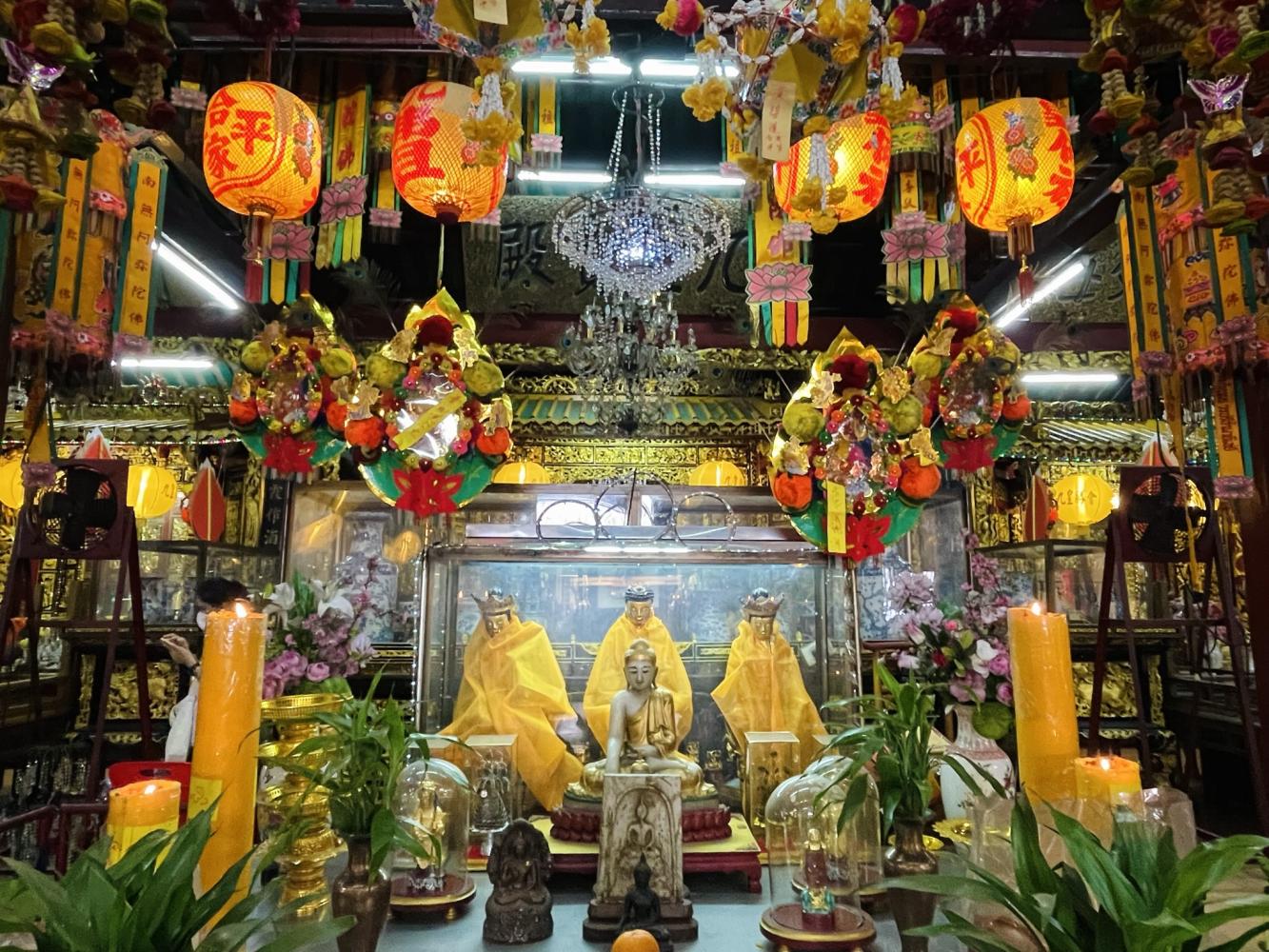 Bun Samakhom Vegetarian Cafeteria is known for its Hokkian craftsmanship. 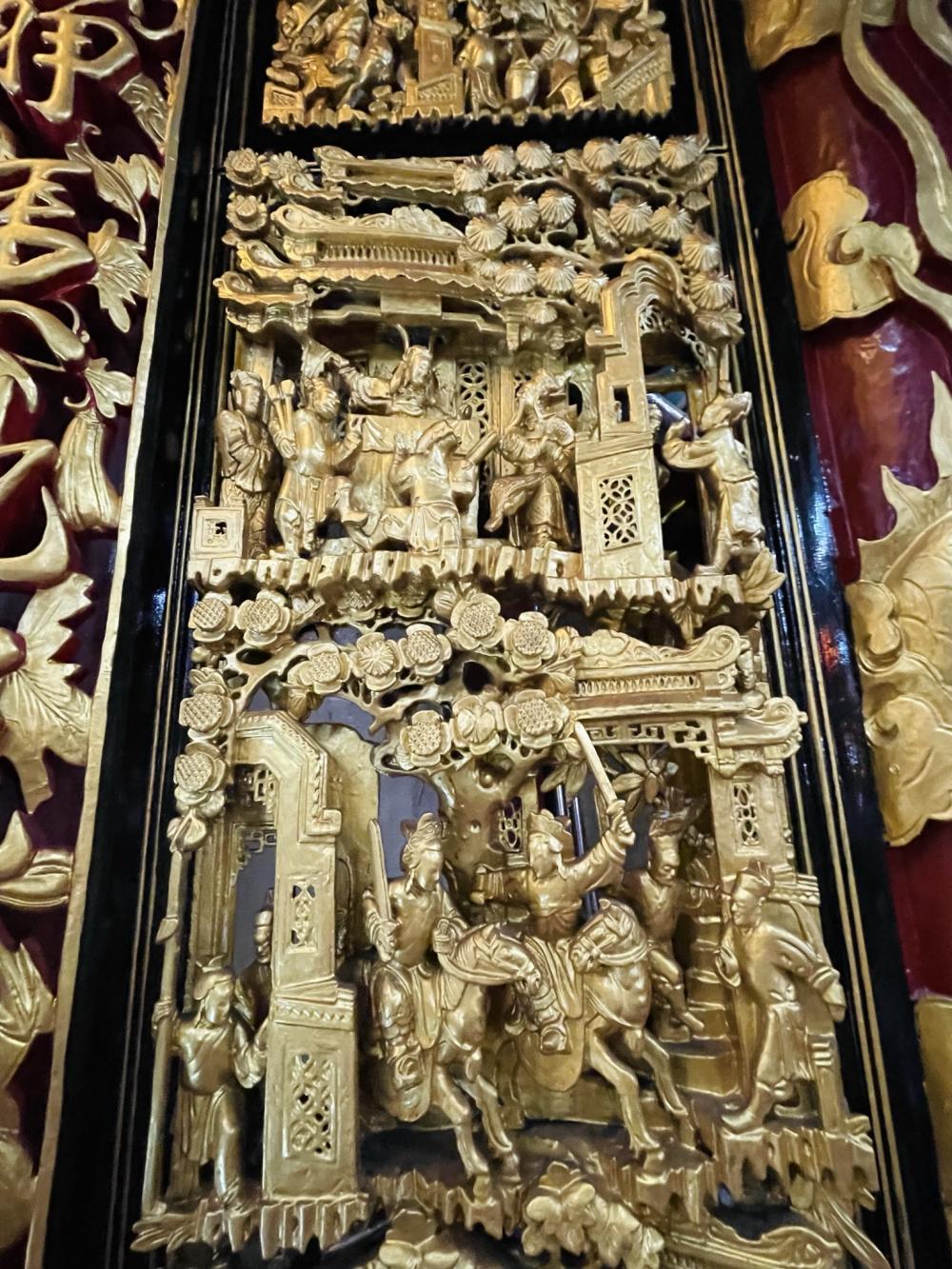 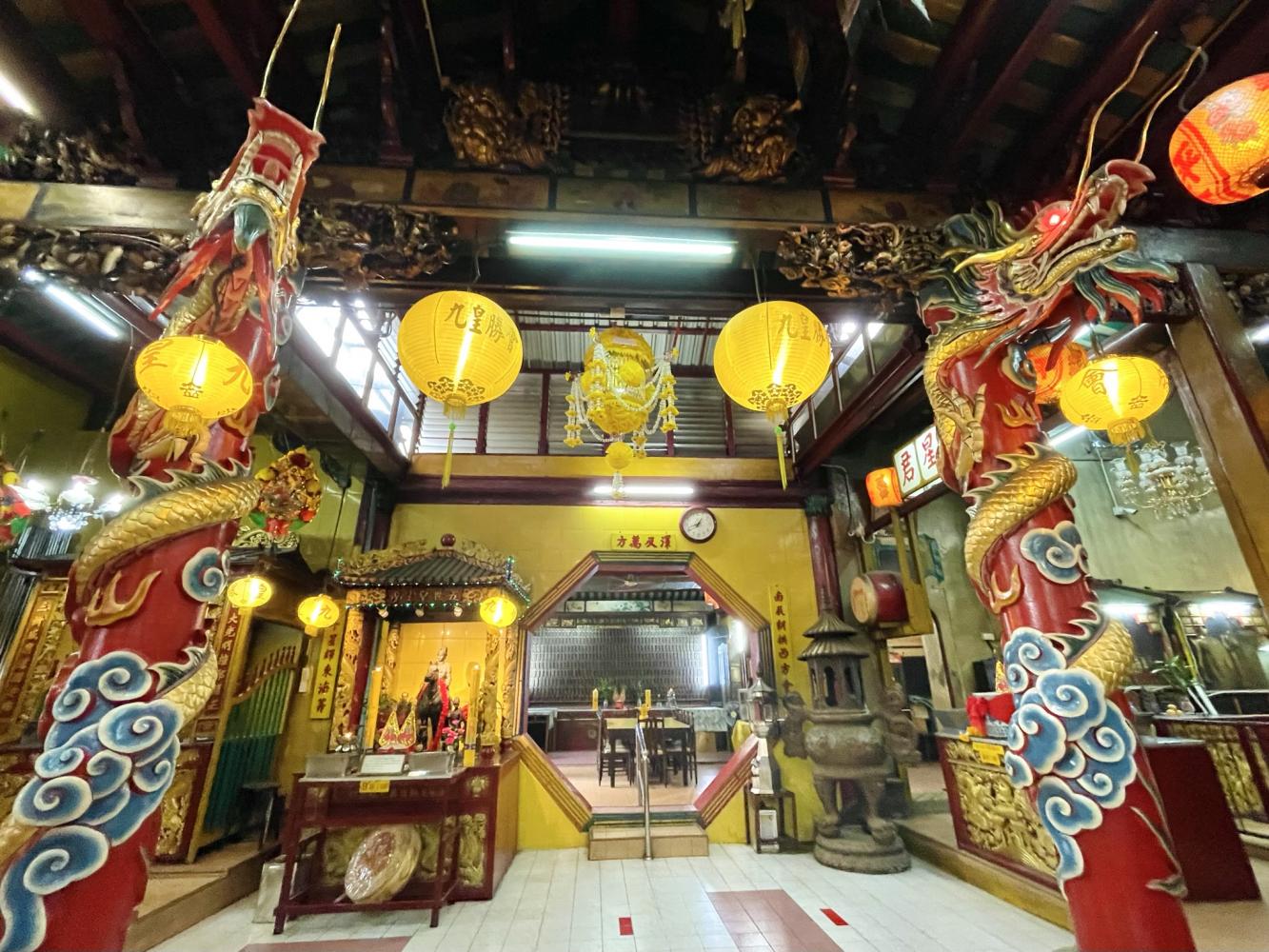 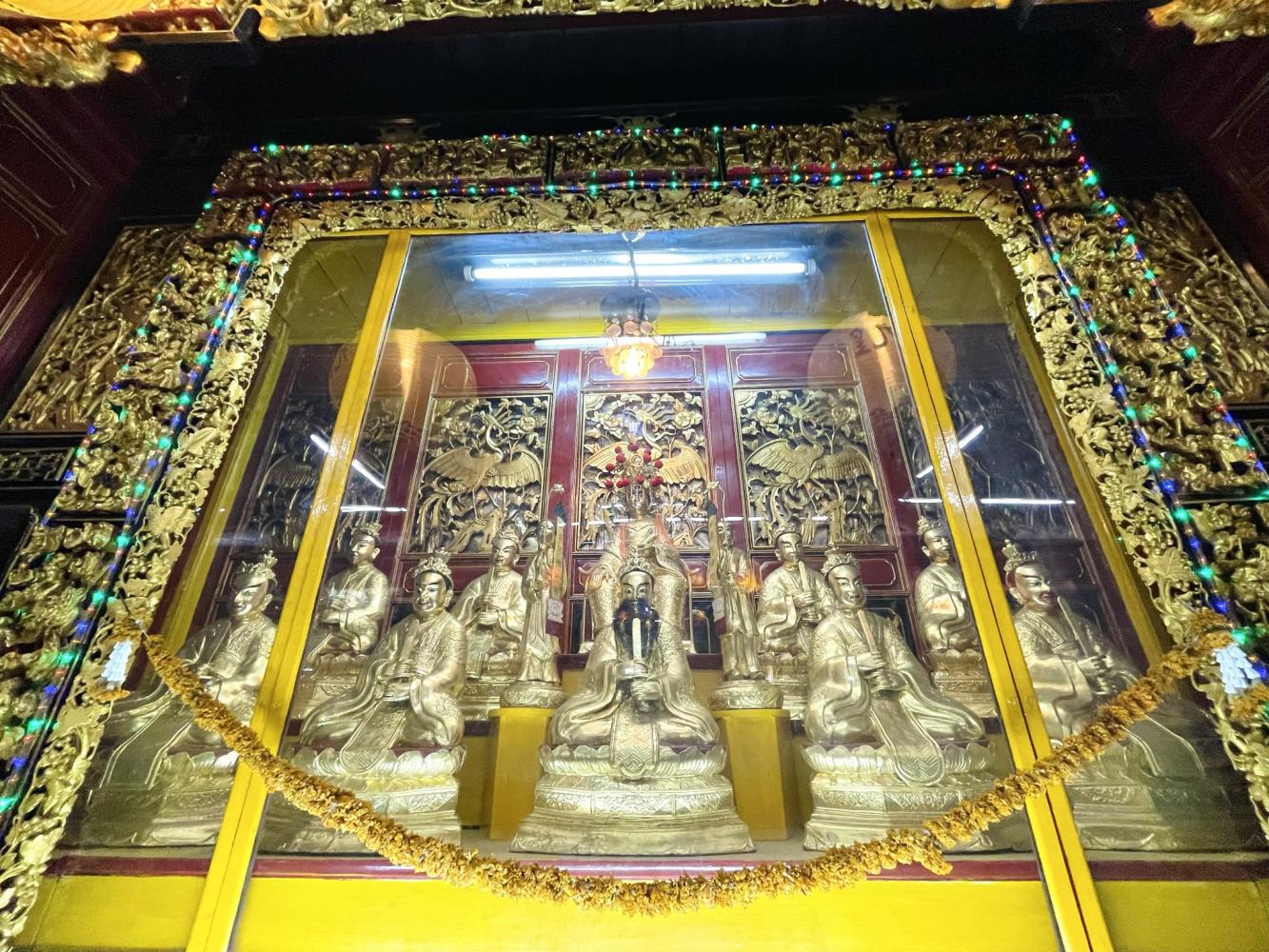 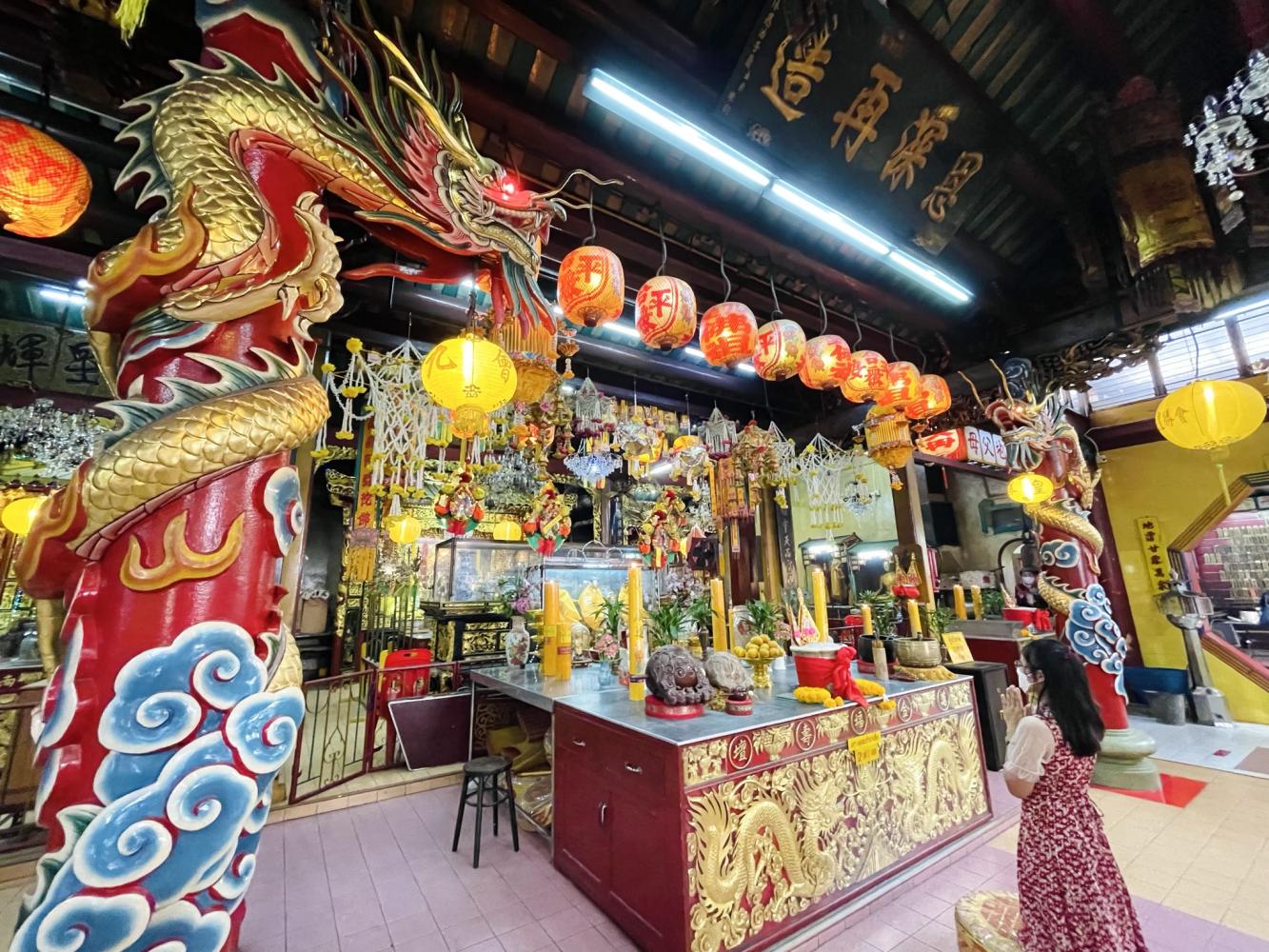 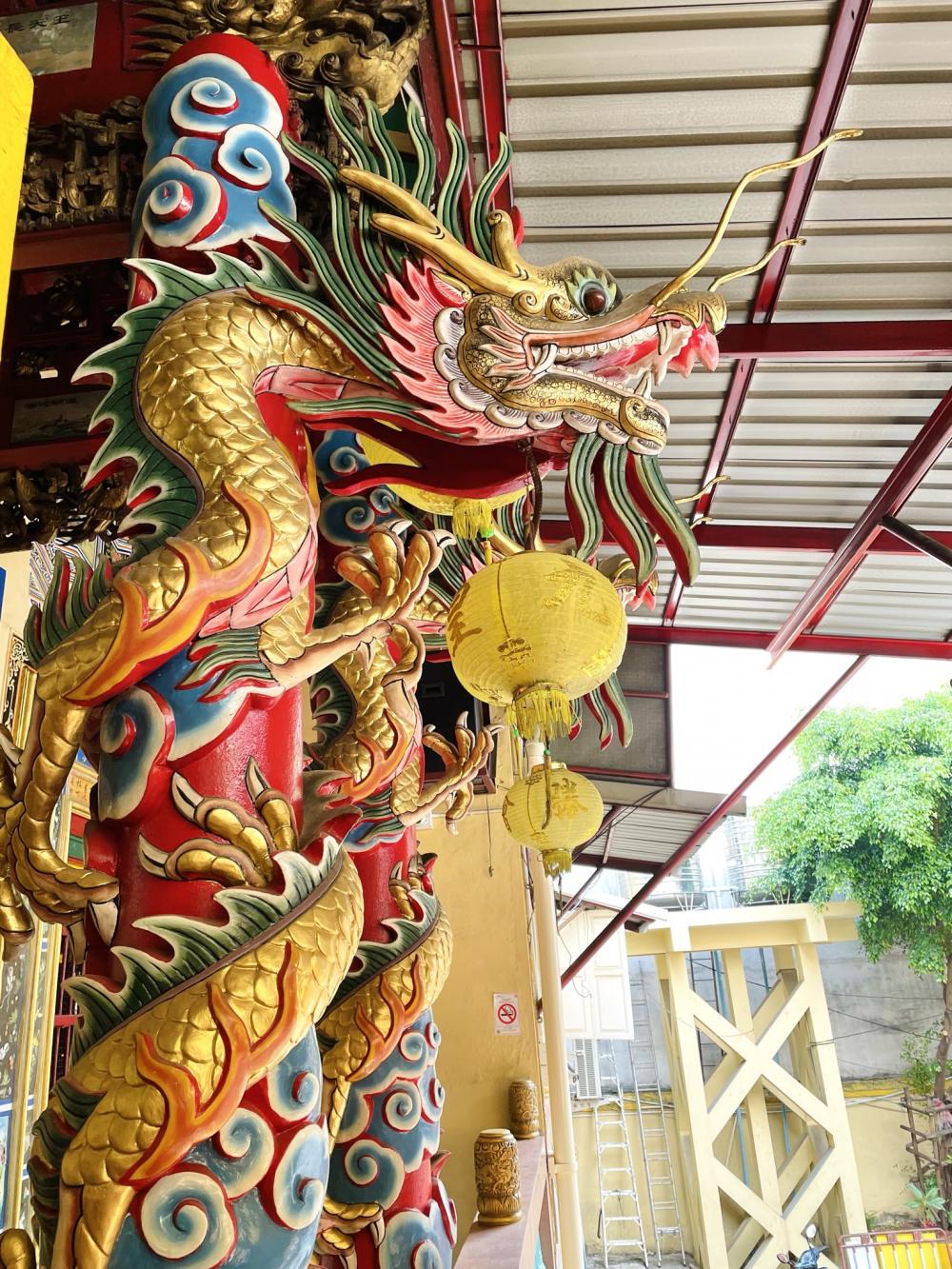 Not far is A Nia Keng Shrine, which stands between two communities near the Ratchawong Pier. When Teochew migrants settled down on the banks of the Chao Phraya River, this neighbourhood was full of warehouses and homes, making it one of the most bustling business and residential districts in Bangkok.

With a large throng of local inhabitants and labourers, this area caught fire several times, so Teochew migrants built this shrine to house a figure of Guan Yin in hopes of protecting their communities.

Its design isn't based on feng shui because it faces the road or river to provide visitors with convenience. The ground is set aside for the local god, while above a holy wood figure of Guan Yin sits on a lotus and wears a Buddha-inspired cap. In the middle, a big joss-stick pot is faced inside, allowing Guan Yin to keep her eyes on the communities as worshippers pray for prosperity, protection and health.

It's a five-minute walk from Sampheng to Wat Kuson Samakhon, which was erected in 1841 to represent Annum Nikaya beliefs. Vietnamese migrants moved to Siam and settled in this area when the French invaded their nation.

A beautifully carved wood statue of Guan Yin with a thousand hands sits at the front to greet visitors as the main hall is simply decorated to enshrine a gigantic statue of Shakyamuni Buddha sitting under the roof, inspired by a Vietnamese dragon boat.

According to Annum Nikaya-style, his face is cheerful, his forehead is small and his nose is shaped like a rose apple. There are also statues of three Buddhas along with two principle disciples Ananda and Mahakasyapa instead of Sariputra and Mahamaudgalyayana in Theravada Buddhism.

Also known as Kwong Siew Shrine, the Canton Shrine is another popular tourist site in Yaowarat. In 1877, a group of Chinese migrants from Guangdong, China, invested 17,000 baht to purchase land on Charoen Krung Road and set up a charitable organisation before constructing this sanctuary in 1880 and a hospital in 1930. 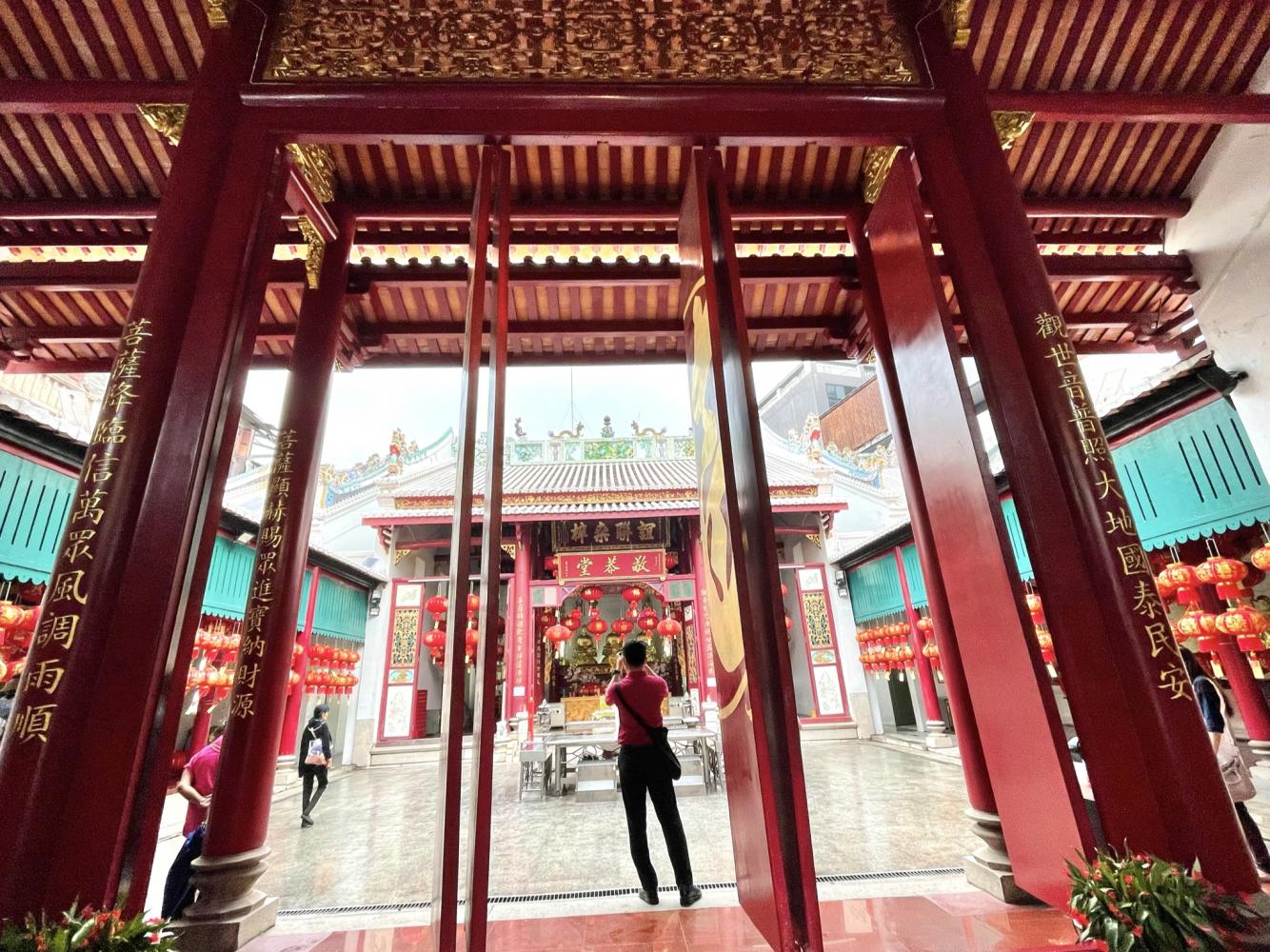 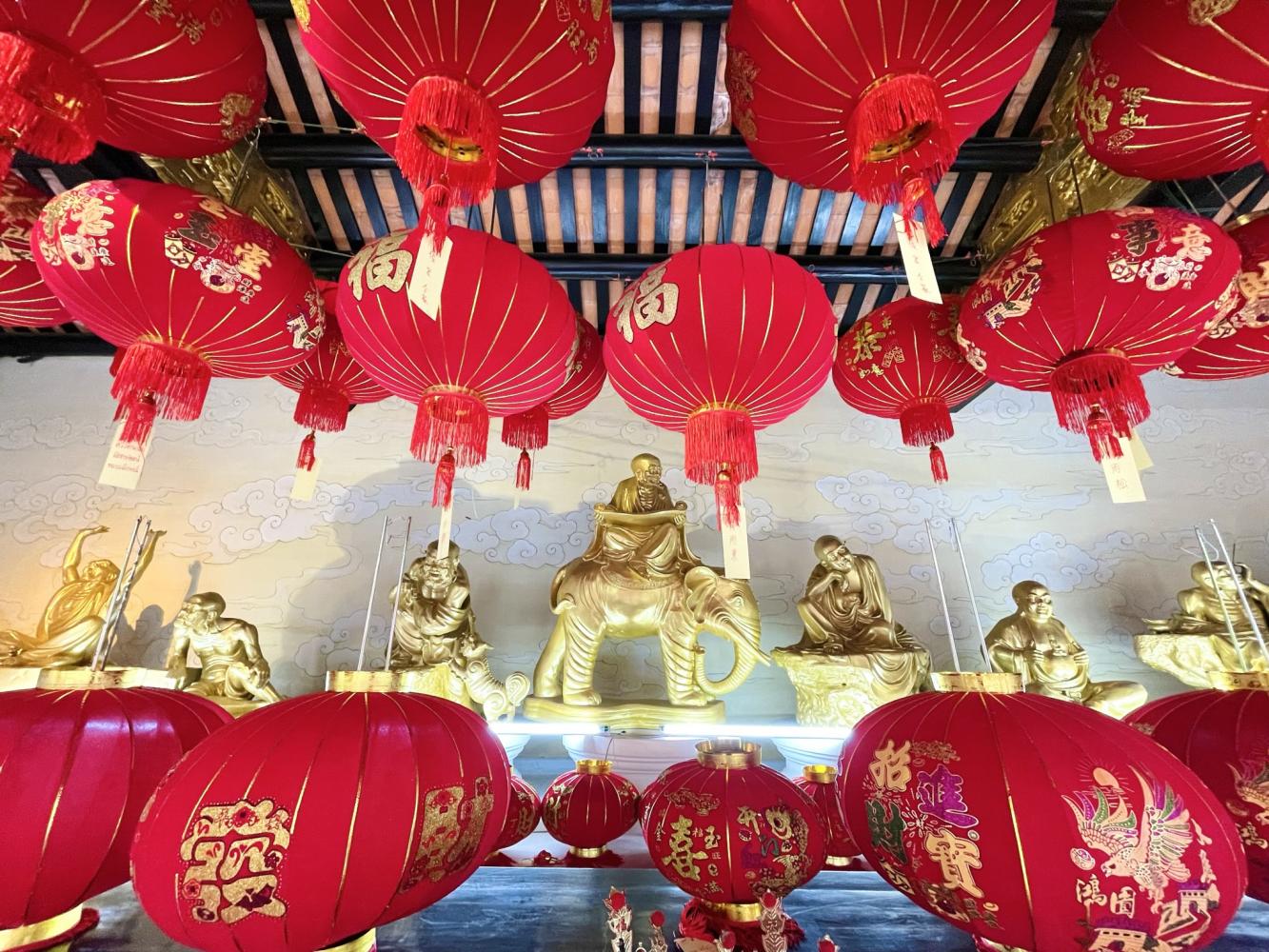 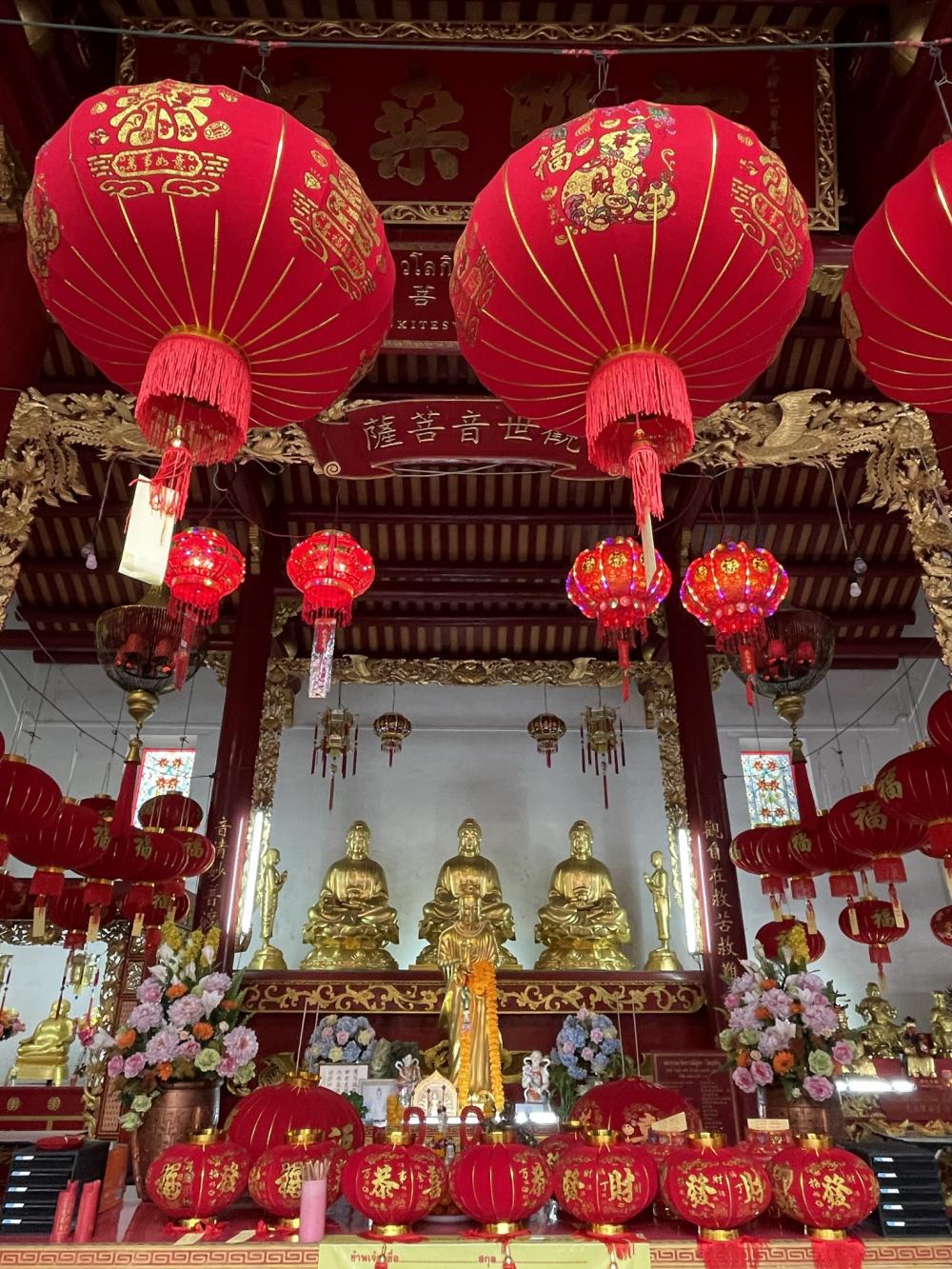 The towering redwood doorway is painted with the Chinese word fu and bats to bring visitors good fortune and happiness, while stone columns, stone stairs, stone lion statues, clay dragons and tiles were all imported from China and assembled in Thailand in the typical Hokkian style.

Focusing on functionality, the ground in the centre of the compound catches rainwater and is encircled by three buildings. Its design is based on a wealth-carrying palm and the Fine Arts Department added it to a list of national ancient monuments in 2001.

The cloisters are lined with the Eighteen Arhats and the main hall is home to revered statues of Avalokitesvara, Guan Yin, Guan Yu, Confucius, Tai Sui, the Jade Emperor, Lou Pan and Lord Tiger riding a turtle and serpent. All of them came from China.

Not far from the Yaowarat Old Market, we continued to Chue Pui Nia Nia Shrine on Phat Sai Road and asked goddess Guan Yin for luck, wealth and good health.

According to folklore, a ritual procession of Guan Yin came to a halt here because it couldn't get through the mountain of garbage, prompting Chinese followers to establish the shrine on this site during the reign of King Rama V. Simultaneously, it was like they were training and cleaning their minds by turning a dirty environment into a holy land, where people might learn about how to achieve enlightenment.

It also has a black 100-year-old wood sculpture of Lord Tiger from Taiwan, as well as a one-of-a-kind wood statue of Tai Sui wringing a mongoose to spit out money and gold, which is modelled after the original 1,300-year-old one in Tibet.

Hemmed in by the neighbourhood of second-hand auto parts shops, Xiang Gong Shrine was built on Song Wat Road in collaboration between Teochew and Hokkian migrants during the reign of King Rama III. Small in scale and simple in decoration, it houses a statue of Xiang Gong holding a sword from Guangdong and pilgrims come to pray for a happy life and success in business and exams.

We arrived at Li Ti Miao Shrine on Phlap Phla Chai Road in the last minutes before it closed its doors. It was first erected in 1902 and restored in 1982 after the structures were damaged by fire. It is designed to look like a Chinese monastery and heavenly palace, in which Tai Shang Lao Jun resides alongside Guan Yin and other deities.

This temple is popular with singles and couples to pray for love and children, while ill worshippers can pick a fortune stick to diagnose their symptoms and take some Chinese medicine home. 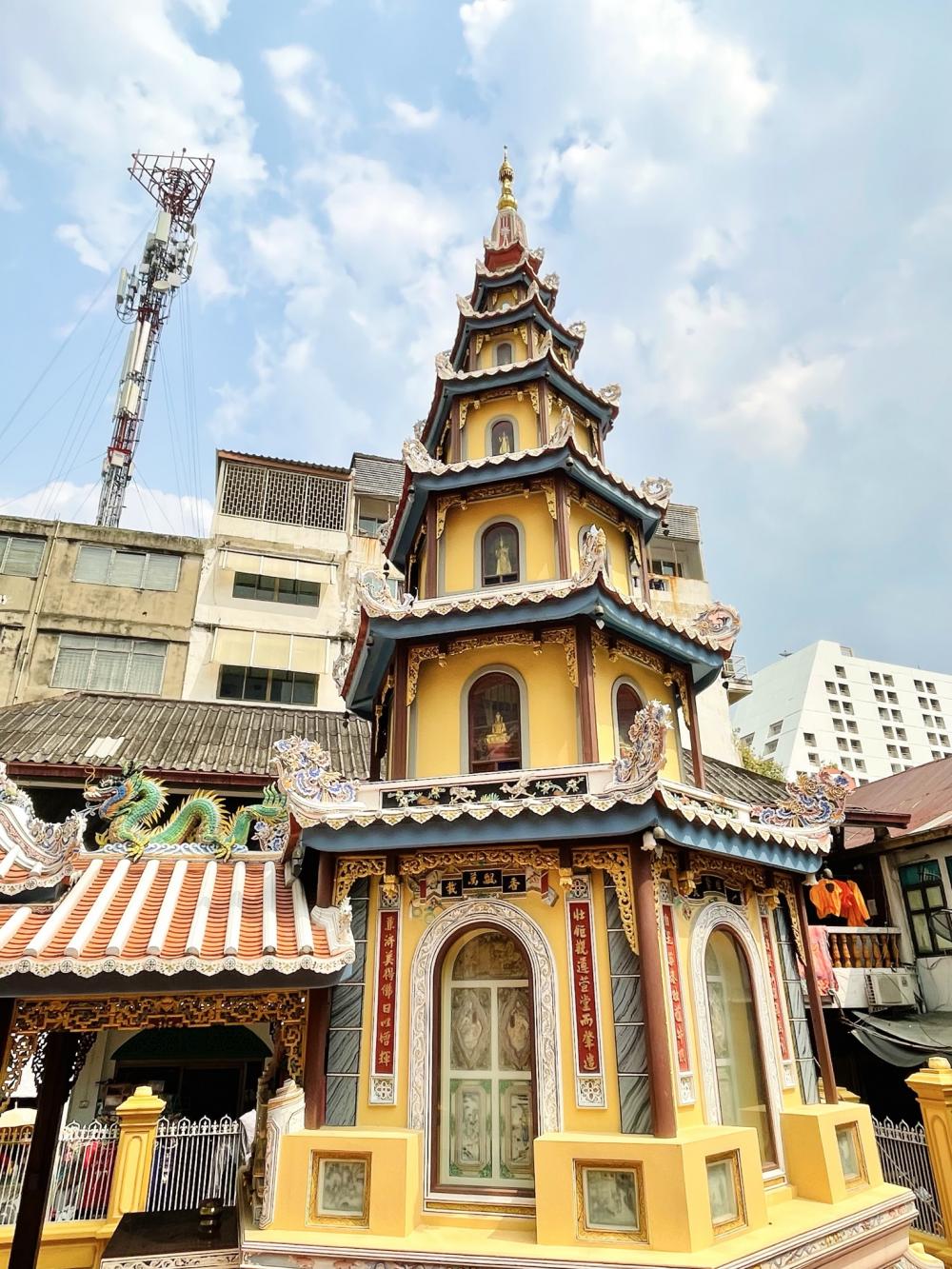 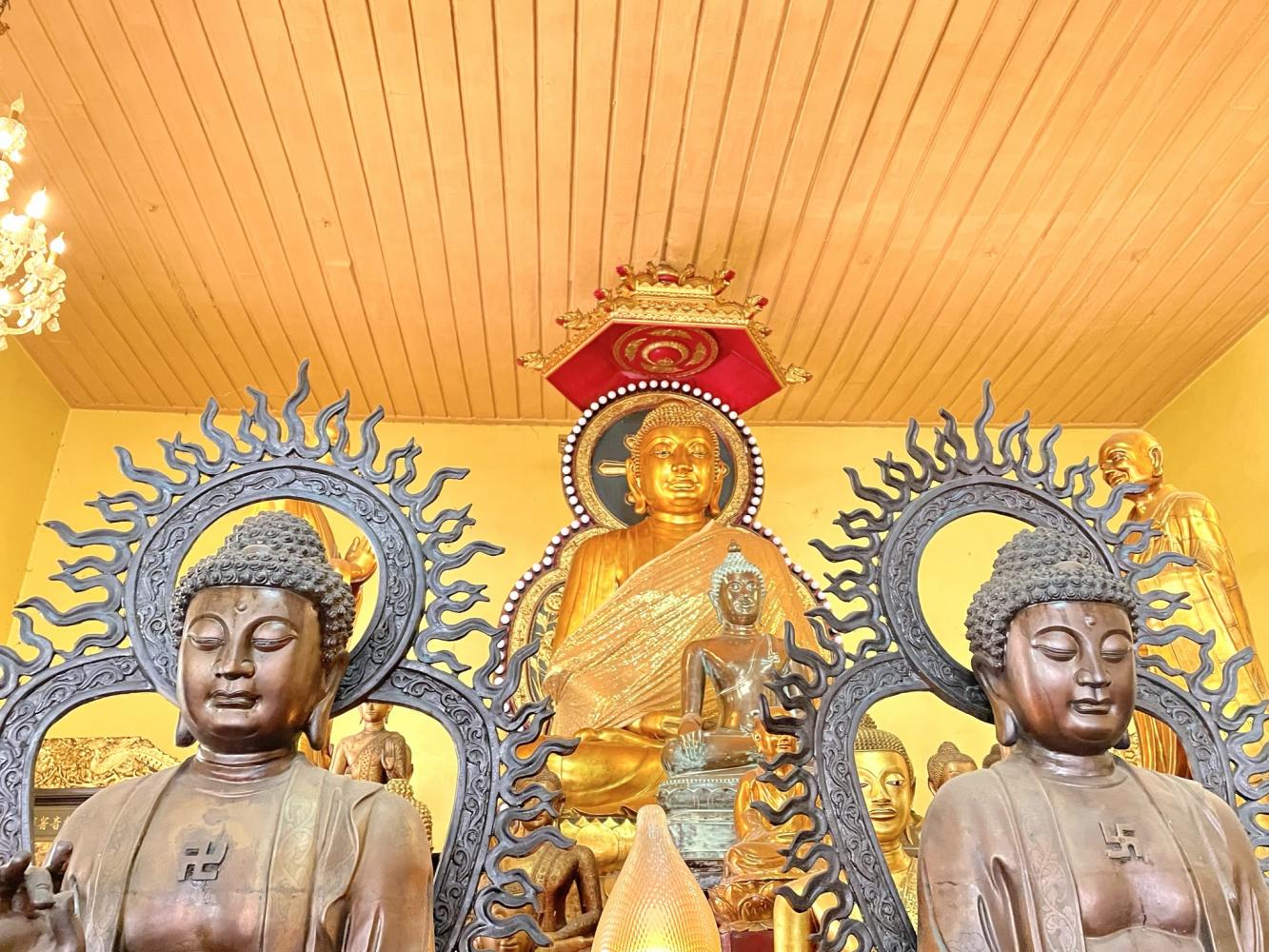 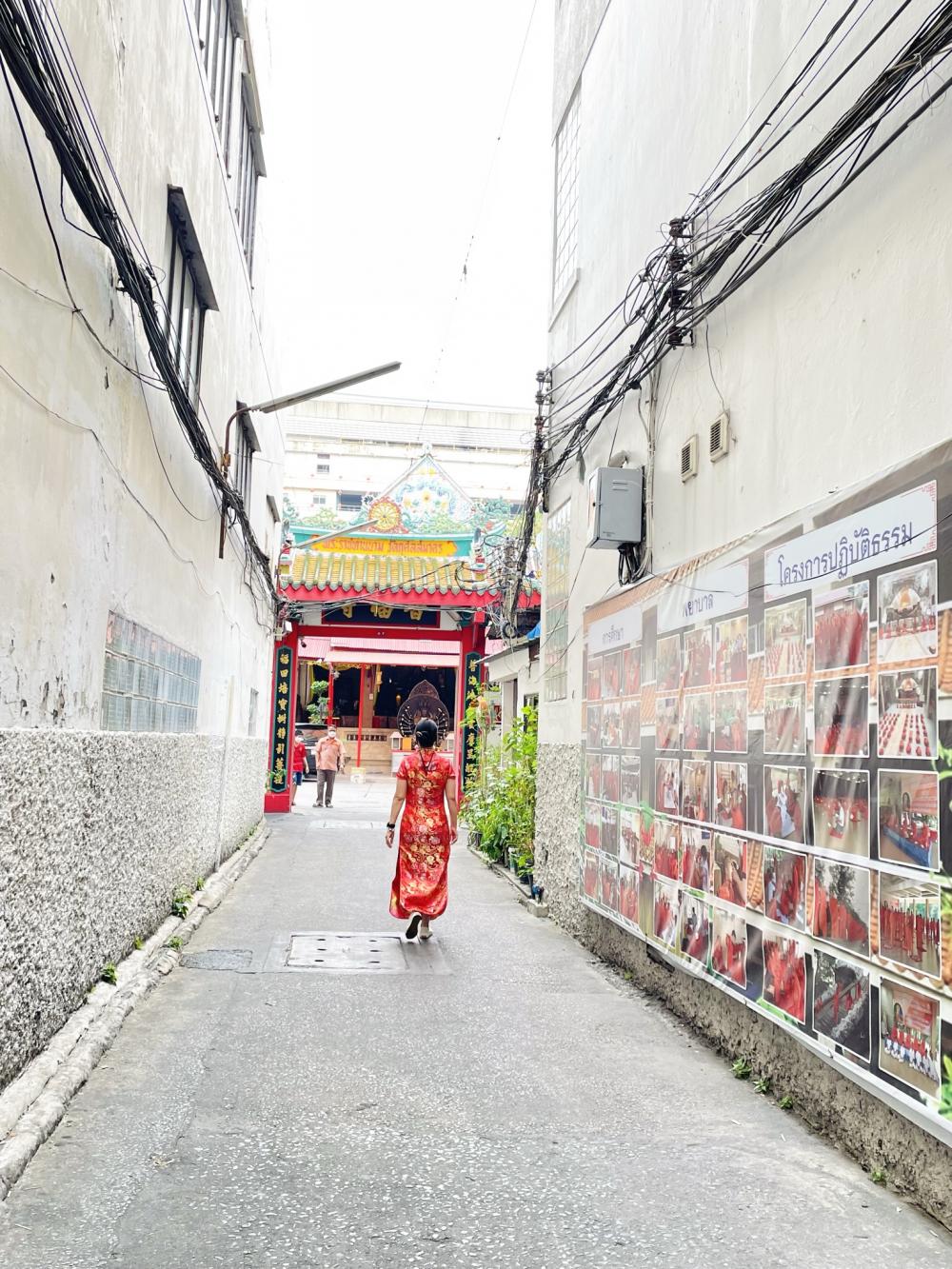 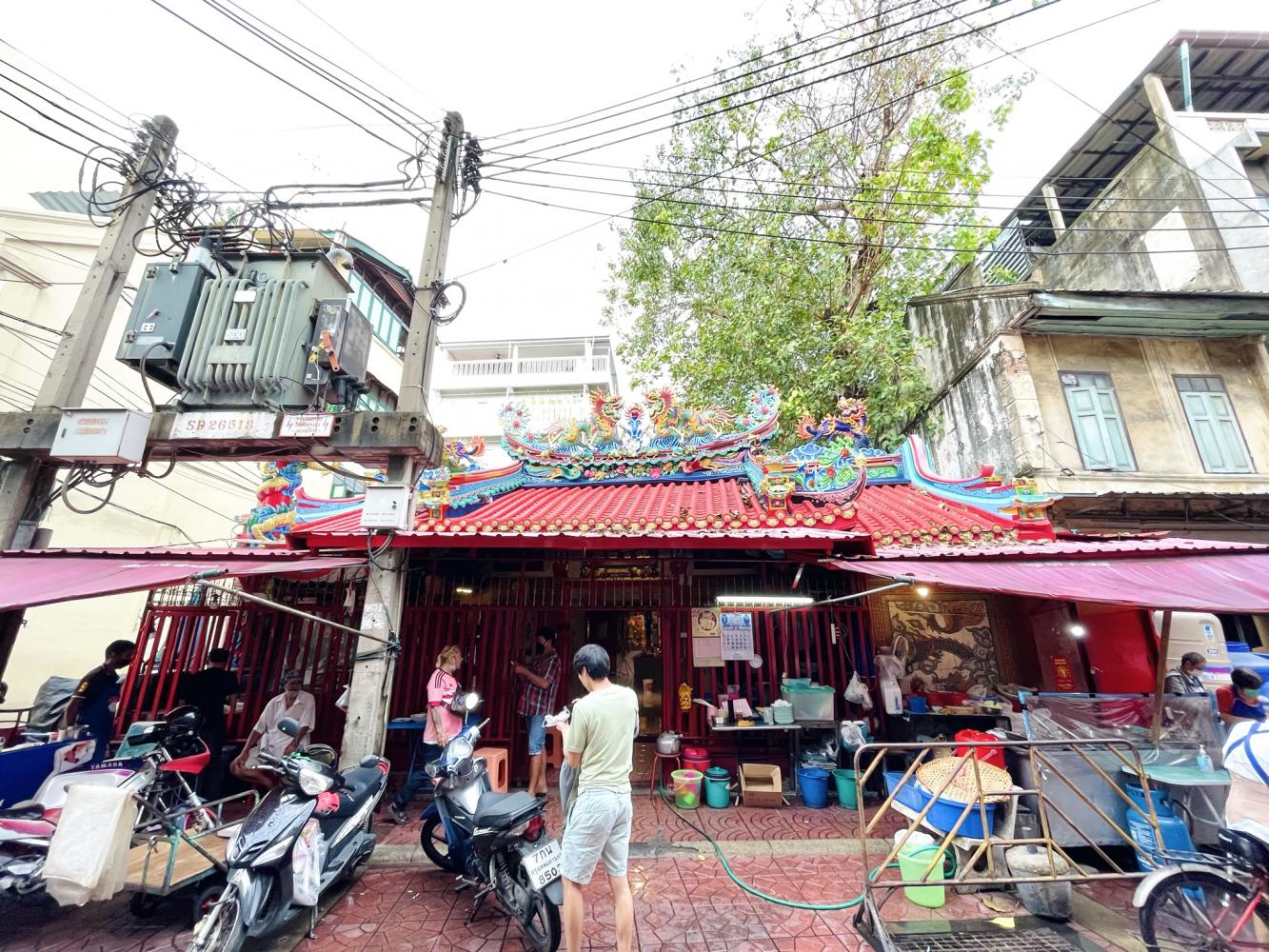 Chue Pui Nia Nia Shrine is dedicated to Guan Yin and also houses a black 100-year-old wood sculpture of Lord Tiger from Taiwan and a wood statue of Tai Sui wringing a mongoose to spit out money and gold, modelled after the original 1,300-year-old shrine in Tibet. 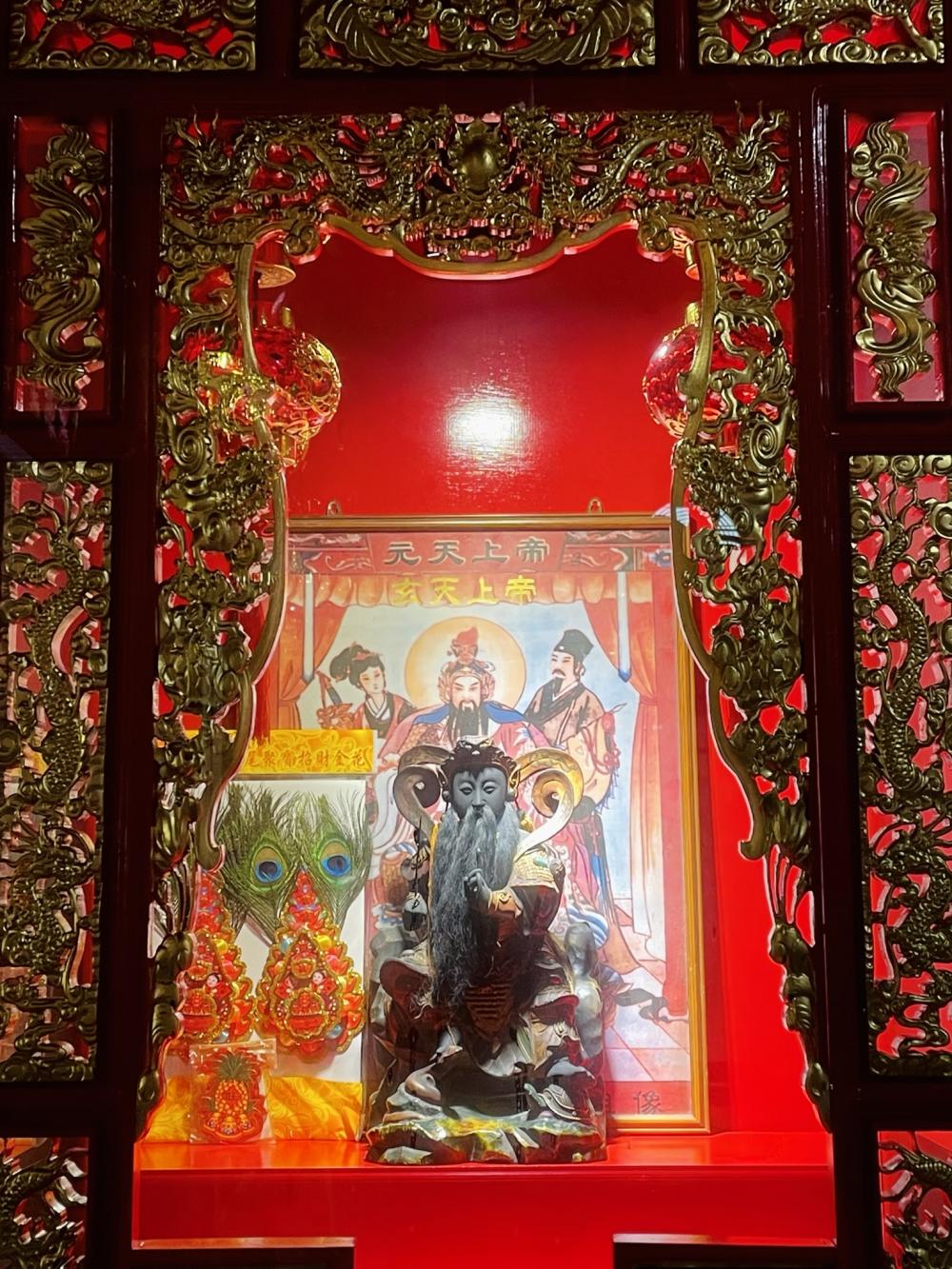 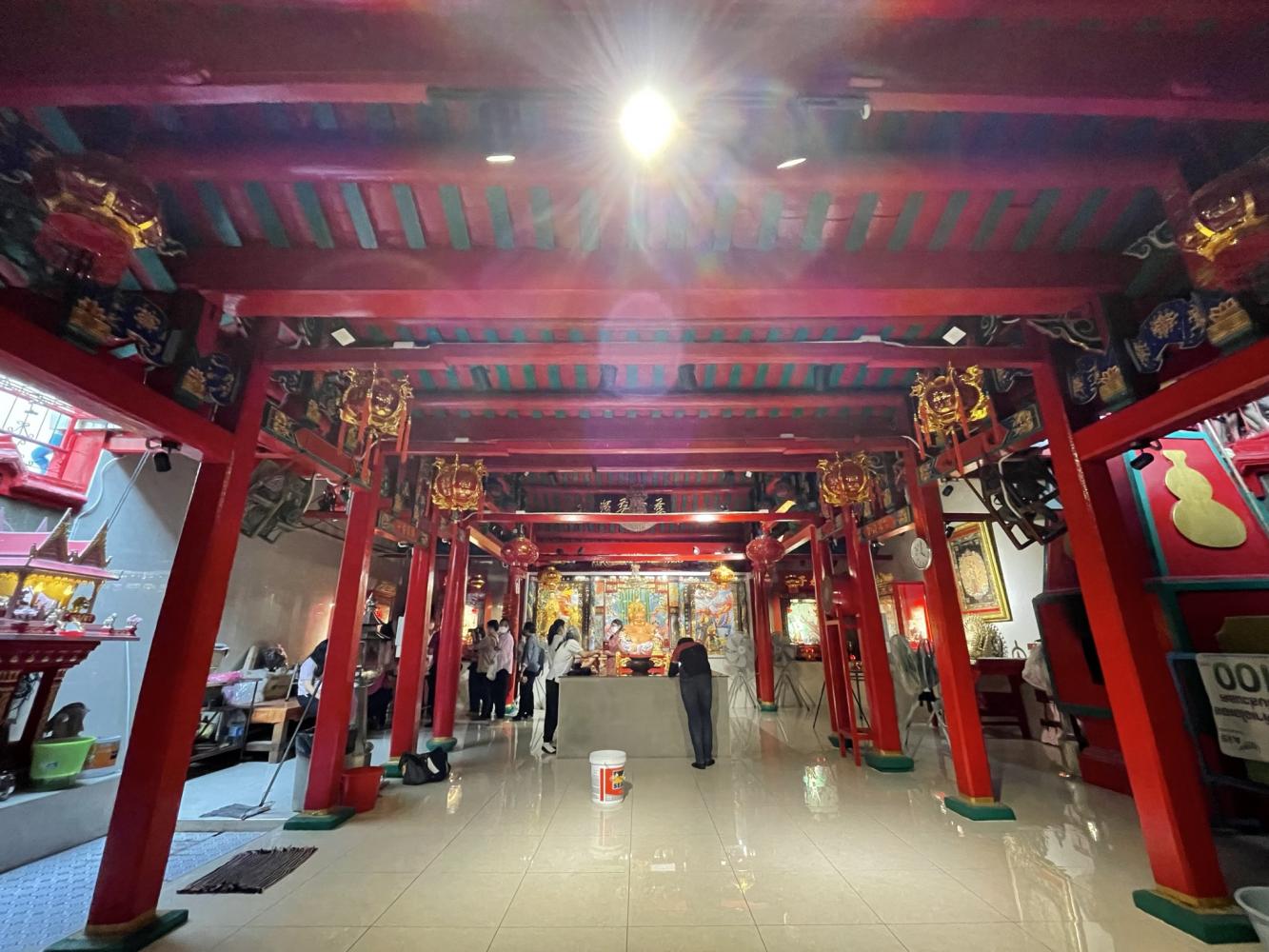 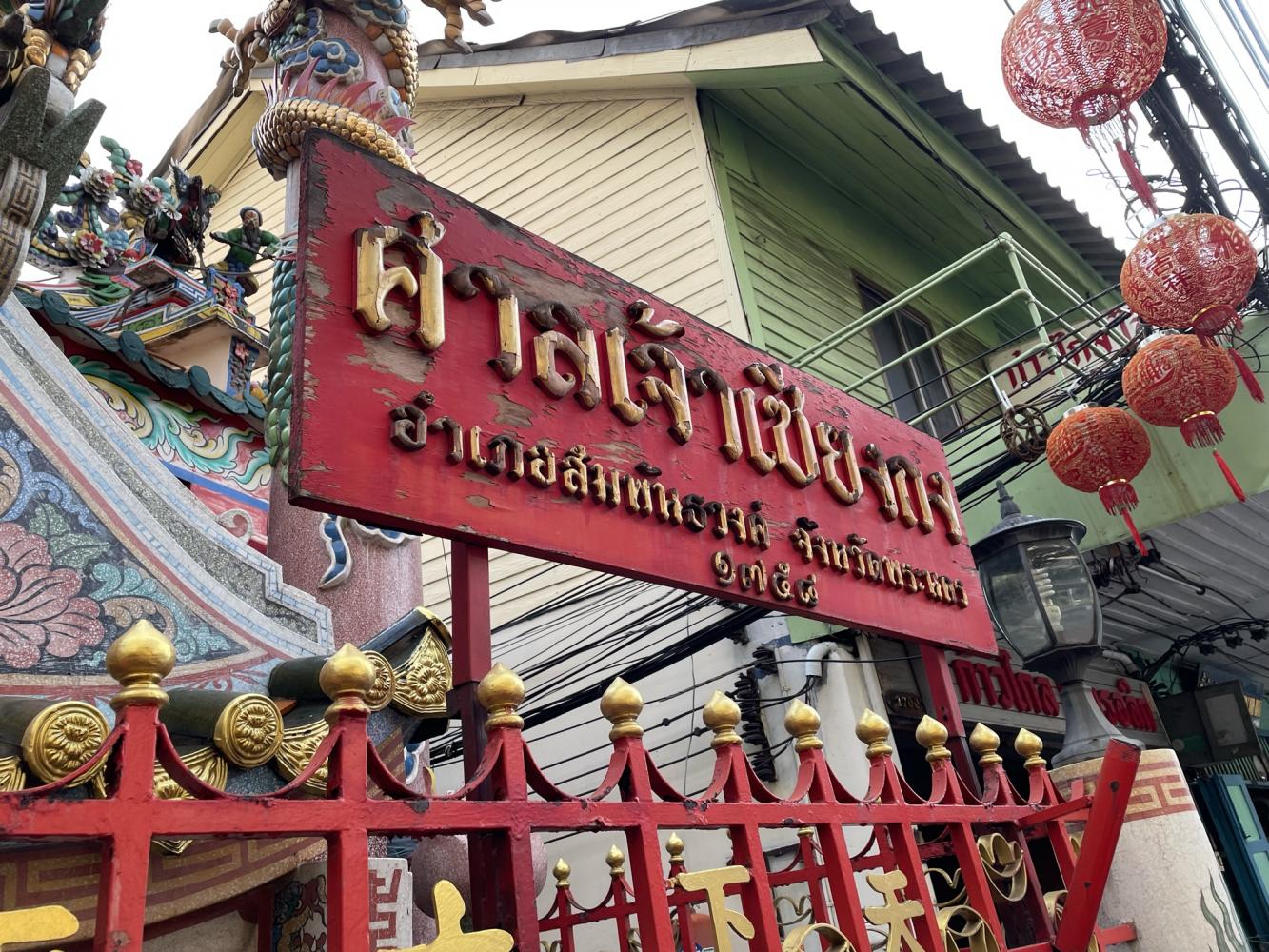 Xiang Gong Shrine was constructed in the reign of King Rama III. 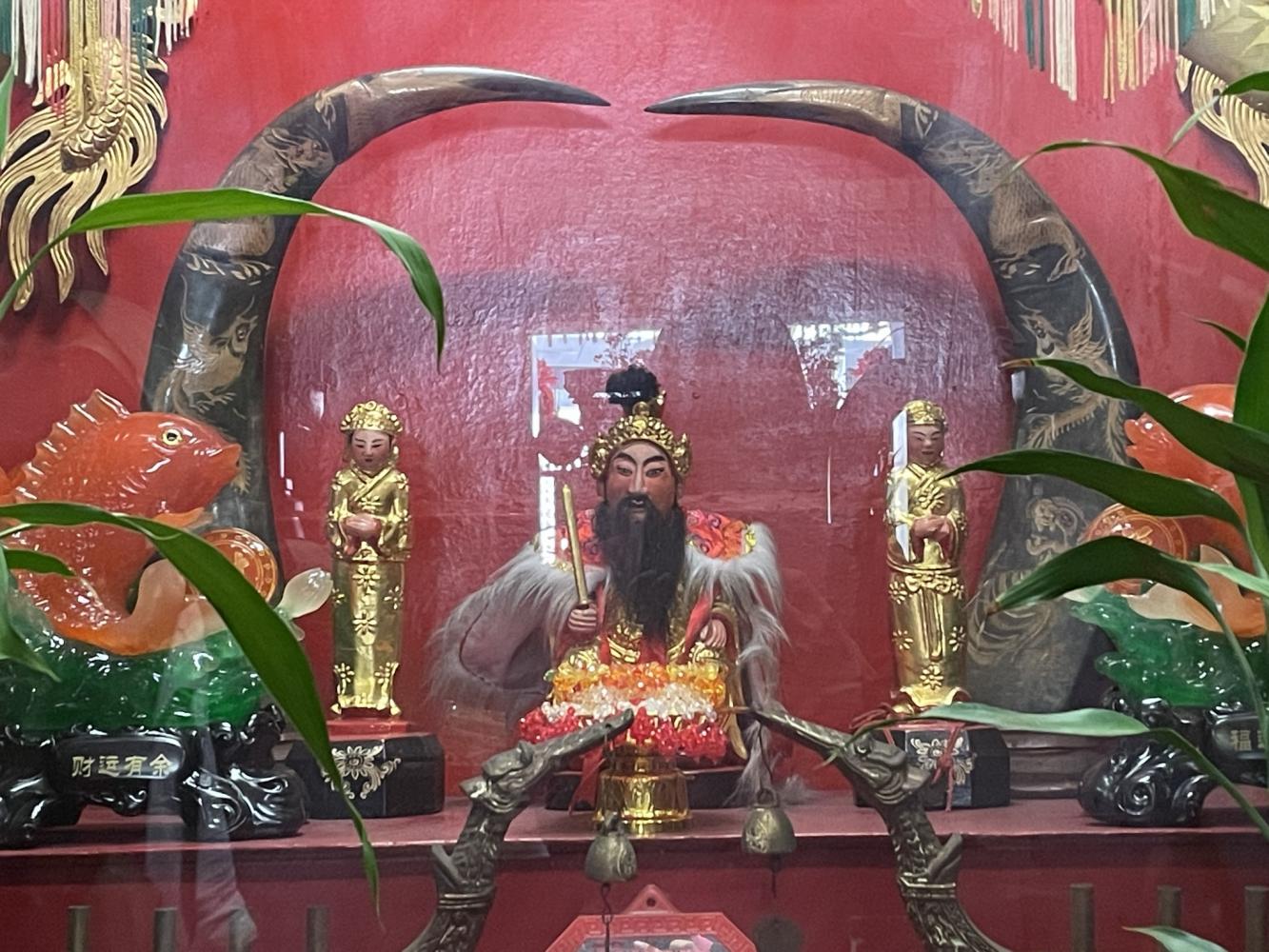 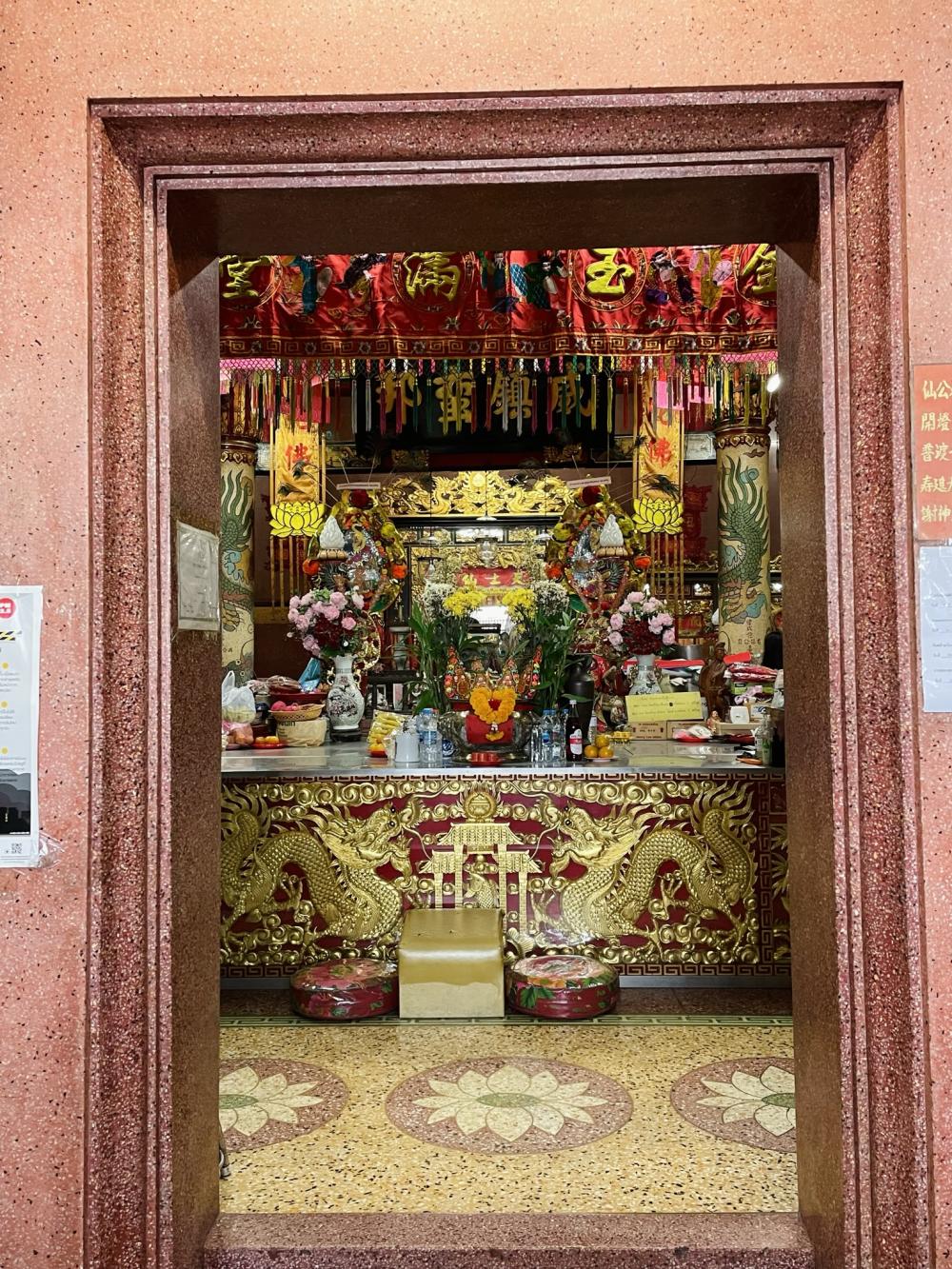 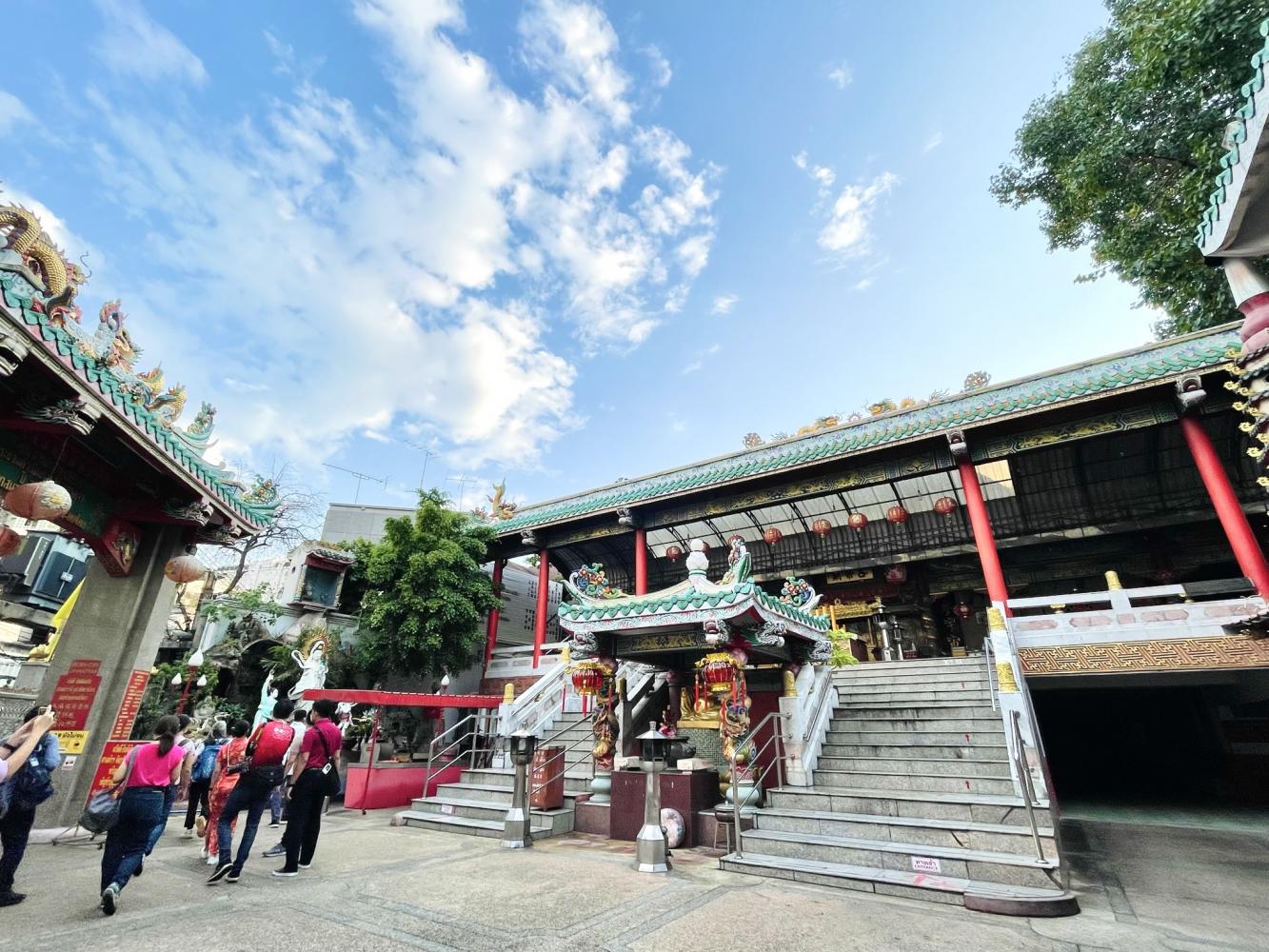 At Li Ti Miao Shrine, ill worshippers can pick a fortune stick to diagnose their symptoms and take some Chinese medicine home. 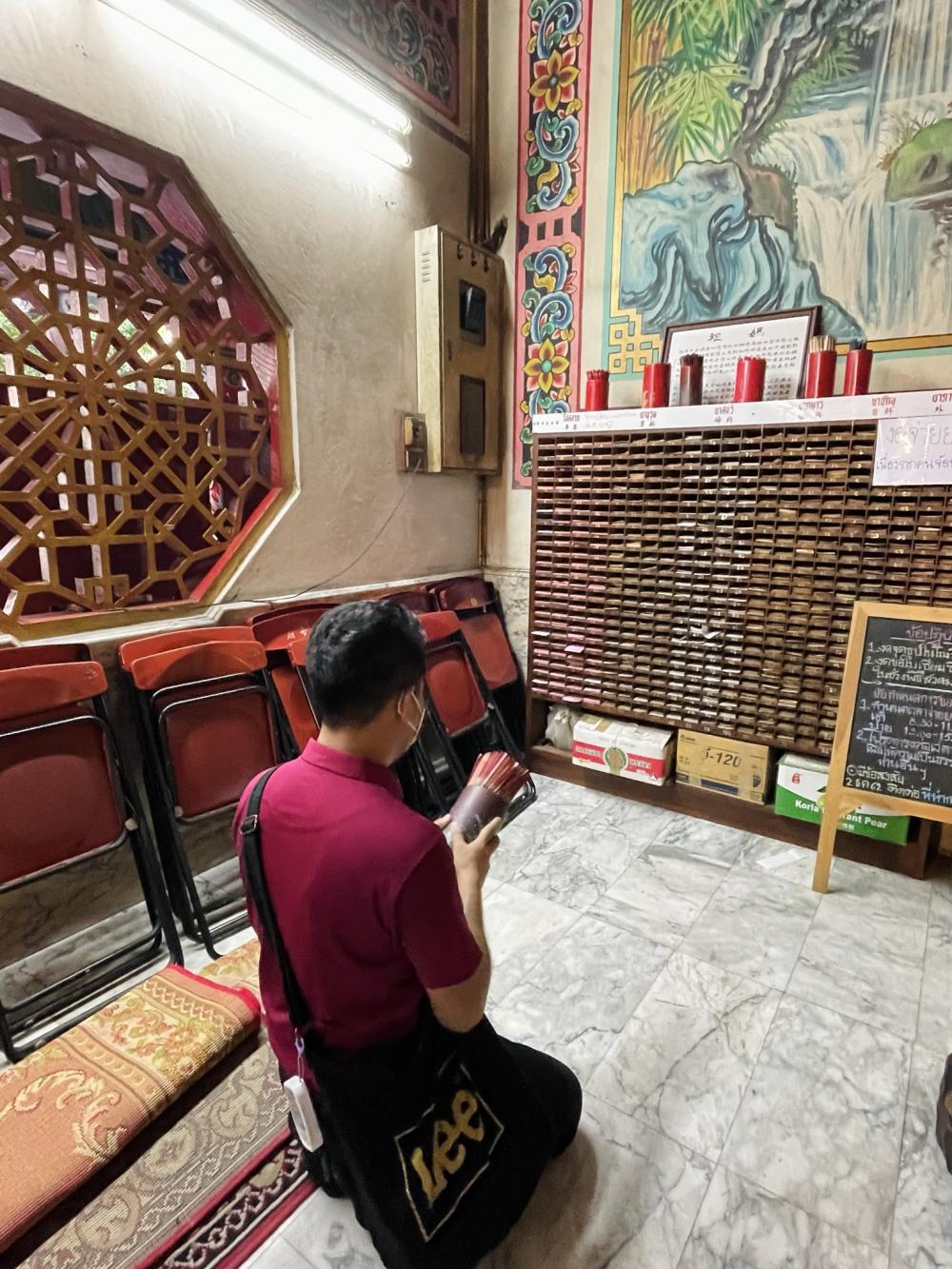 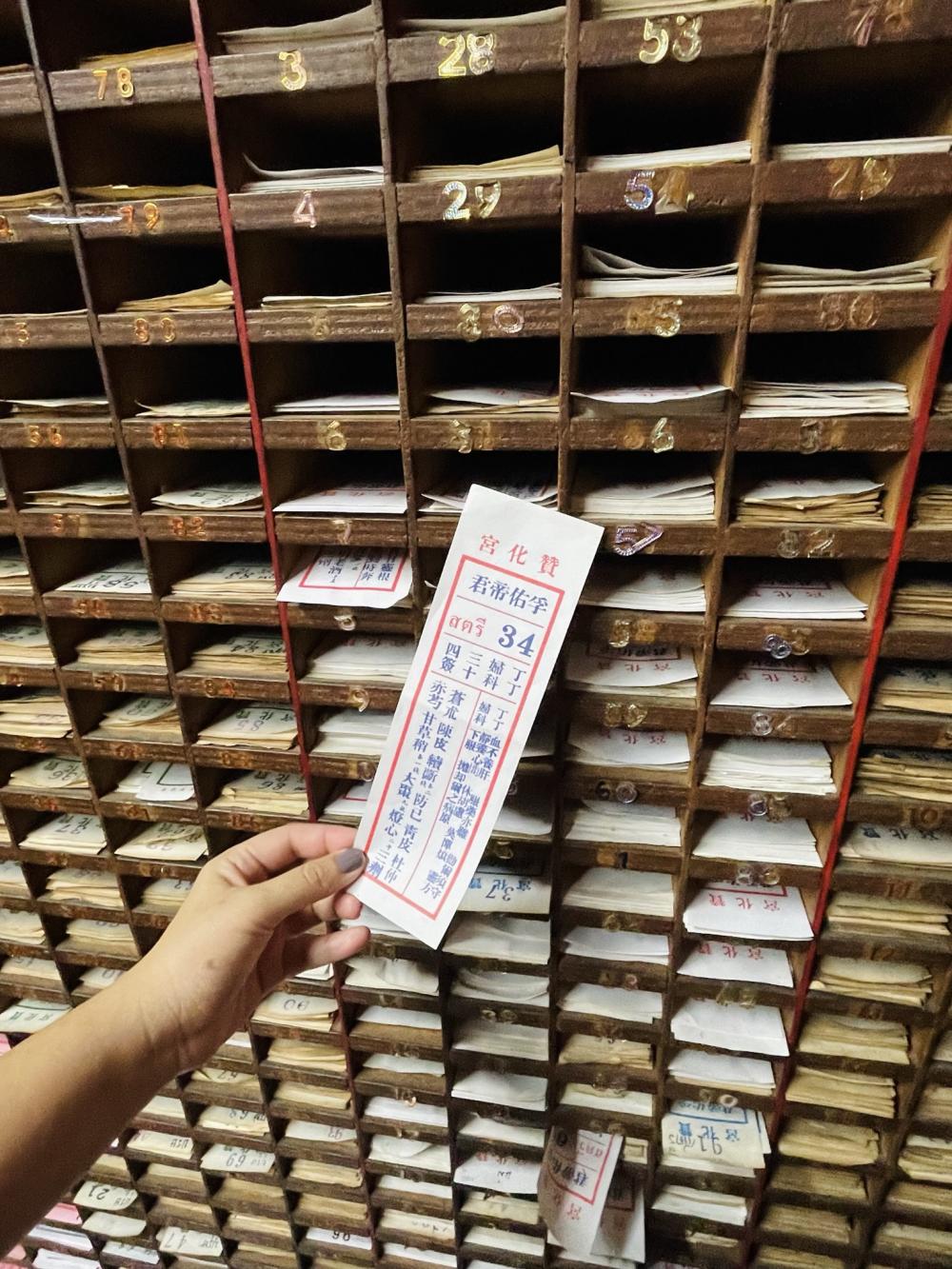 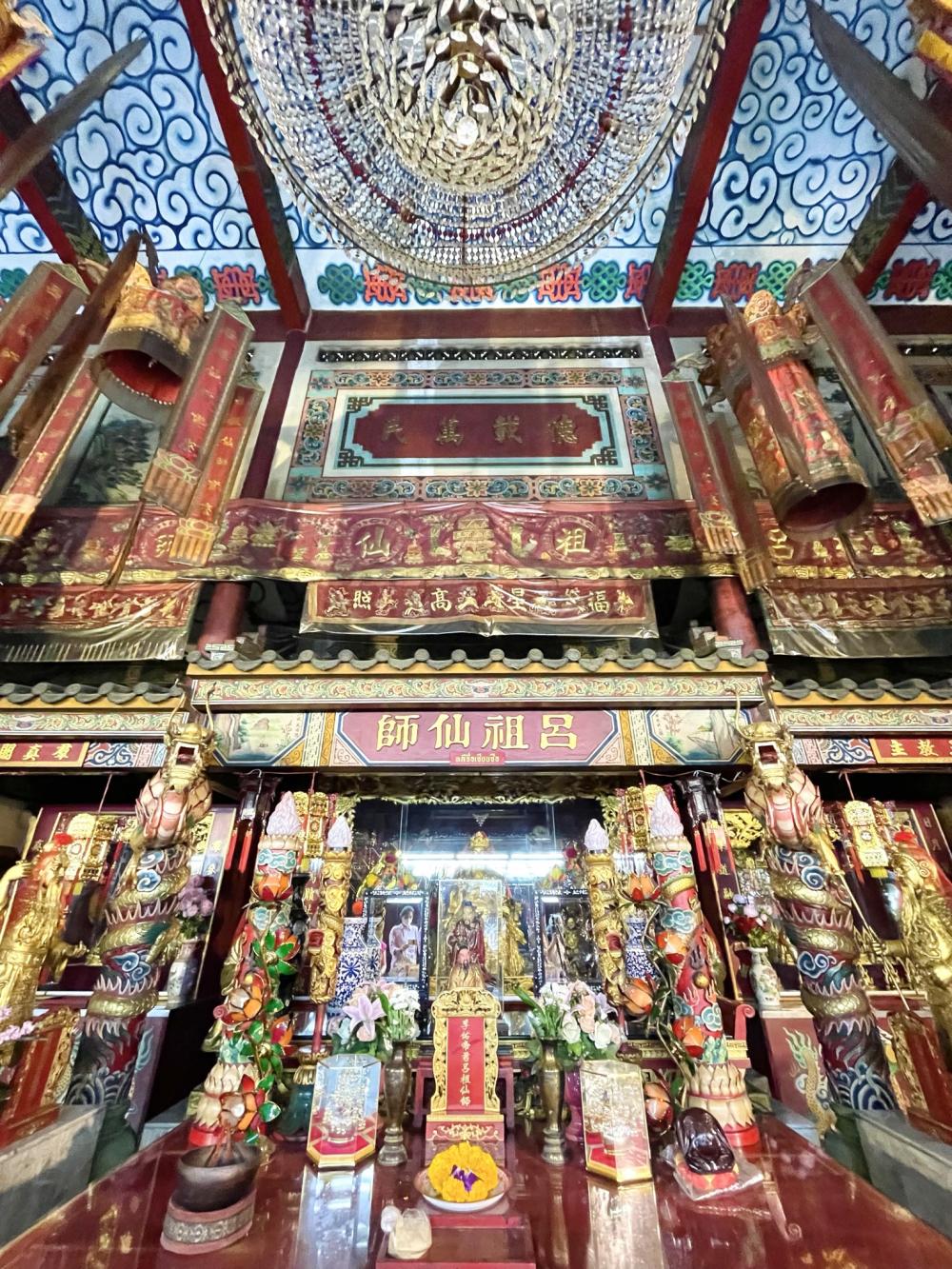 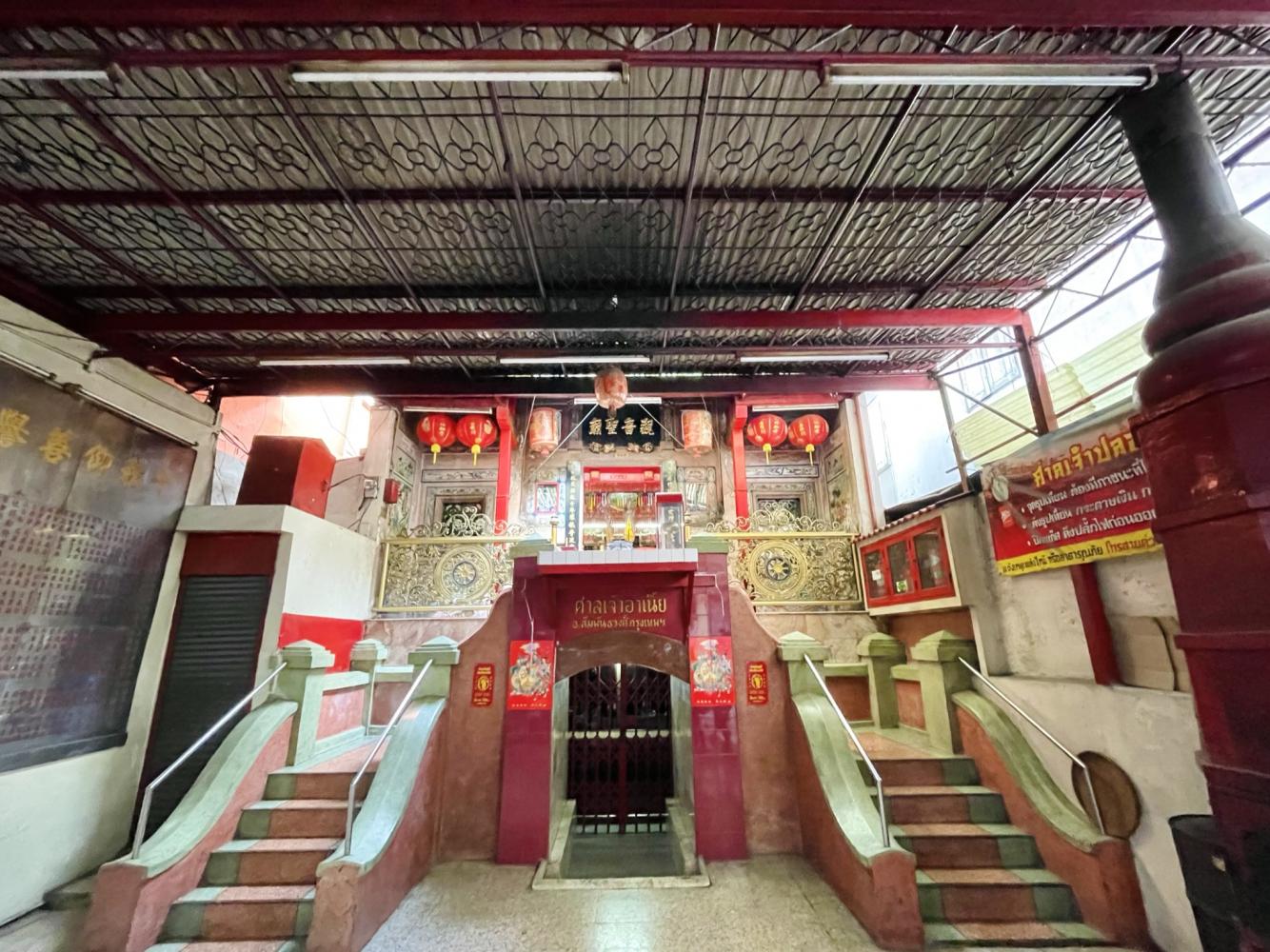 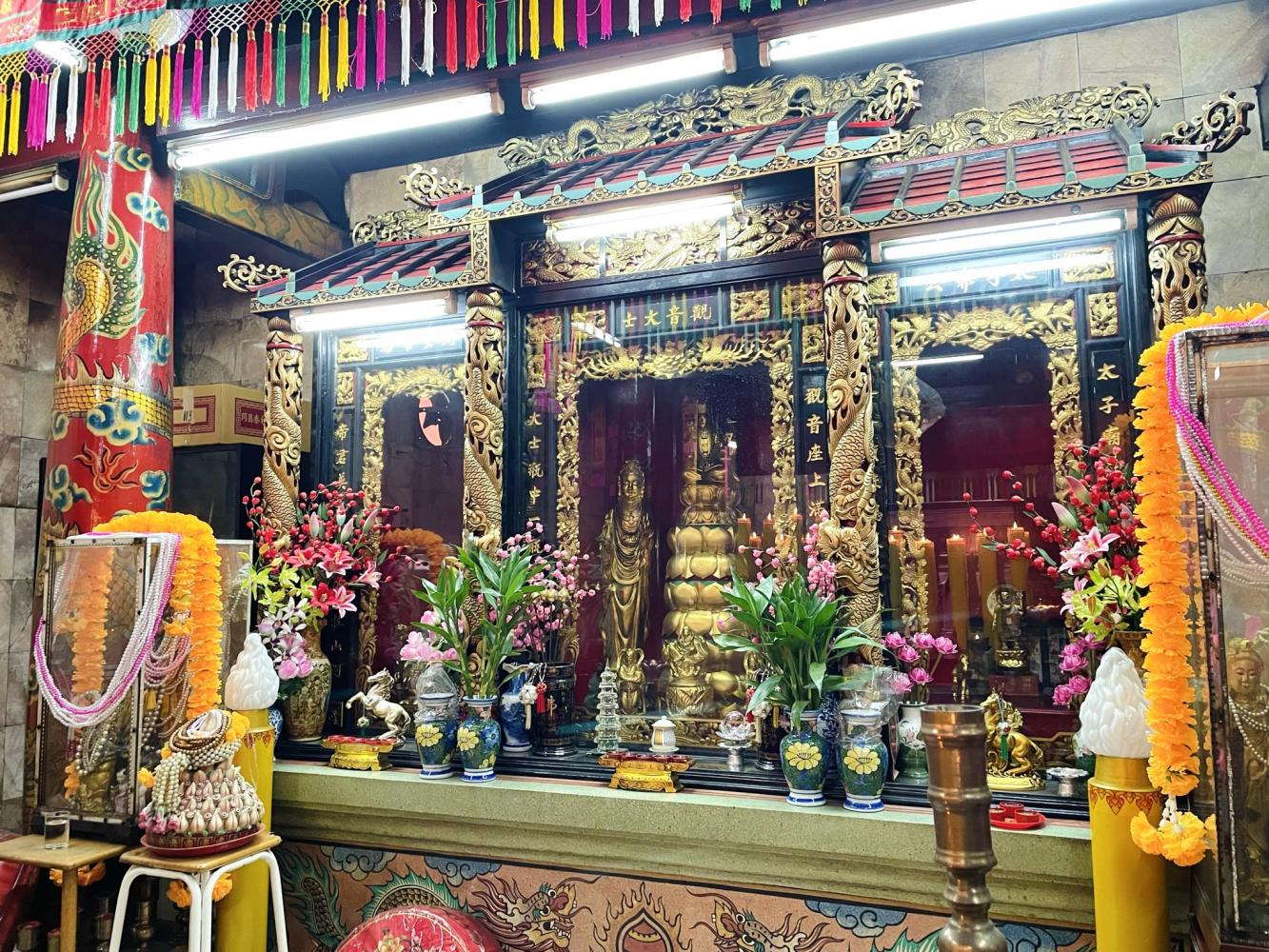