A trip back in time
Travel

A trip back in time

Originally built in the inner court of the Grand Palace on the banks of the Chao Phraya River, Phra Tamnak Daeng, or Red House, was once the residence of Sri Sudarak, King Rama I's elder sister. Following Queen Sri Suriyendra's request, this wooden house was relocated to Wangderm Palace in Thon Buri where she later spent the rest of her life with her son King Pinklao.

After the queen's death, King Pinklao rebuilt his mother's old palace as a parsonage for the ecclesiastical chief of Molilokayaram Temple. Later, the Red House was moved to Phra Rajawang Boworn Sathan Mongkhon, or Wang Na, where King Pinklao lived as the vice-king below his brother King Mongkut.

During the reign of Rama VII, all royal buildings in Wang Na were redesigned as the Bangkok National Museum. Meanwhile, the Red House was used as part of the museum's exhibition to showcase a rare collection of refined marquetry items and Benjarong porcelain tableware from each Rattanakosin era. However, the 240-year-old house had deteriorated over time. Last year, the Department of Fine Arts extensively refurbished and relocated this historical building to Chak Mahima Gate, behind Sivamok Piman Throne Hall. 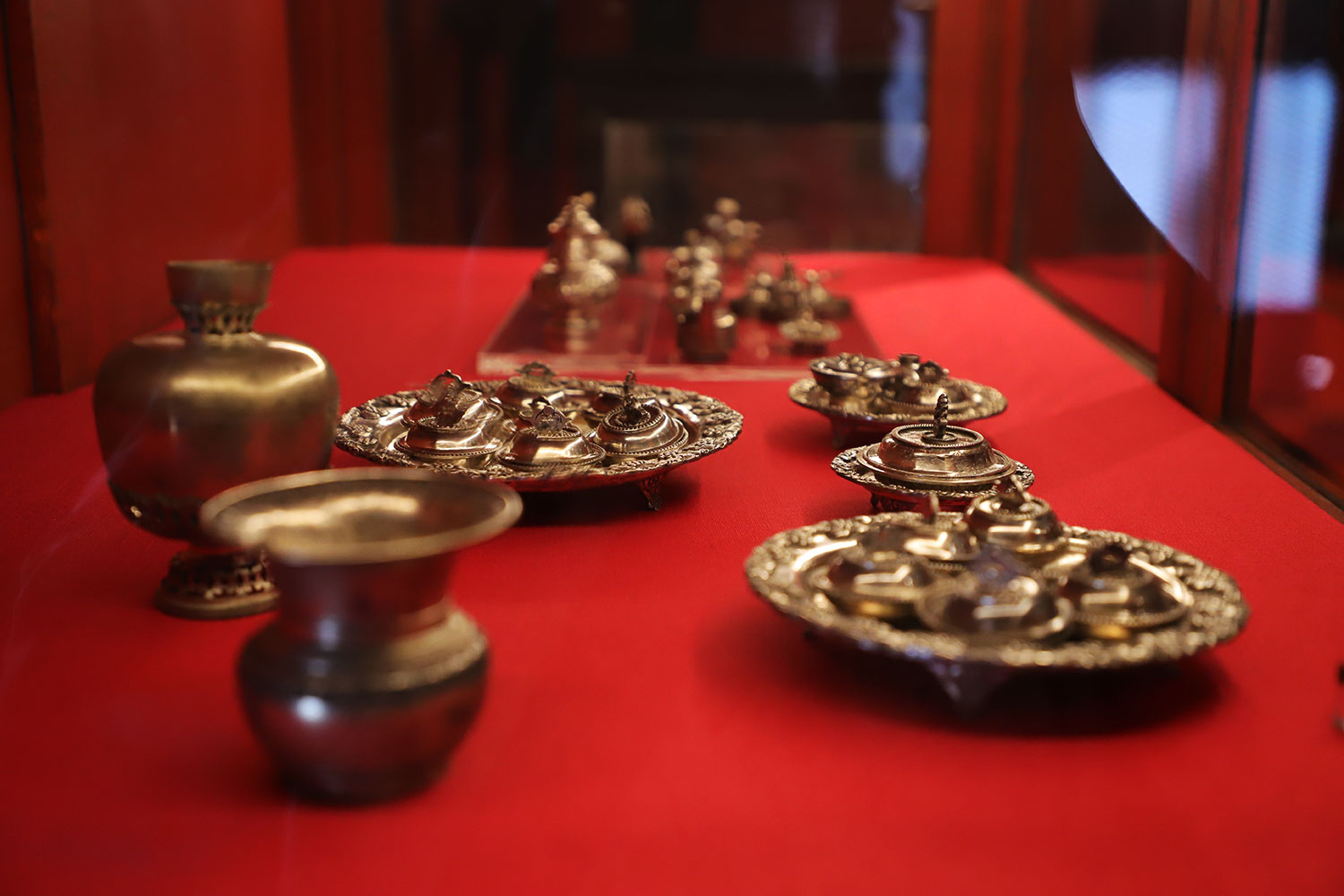 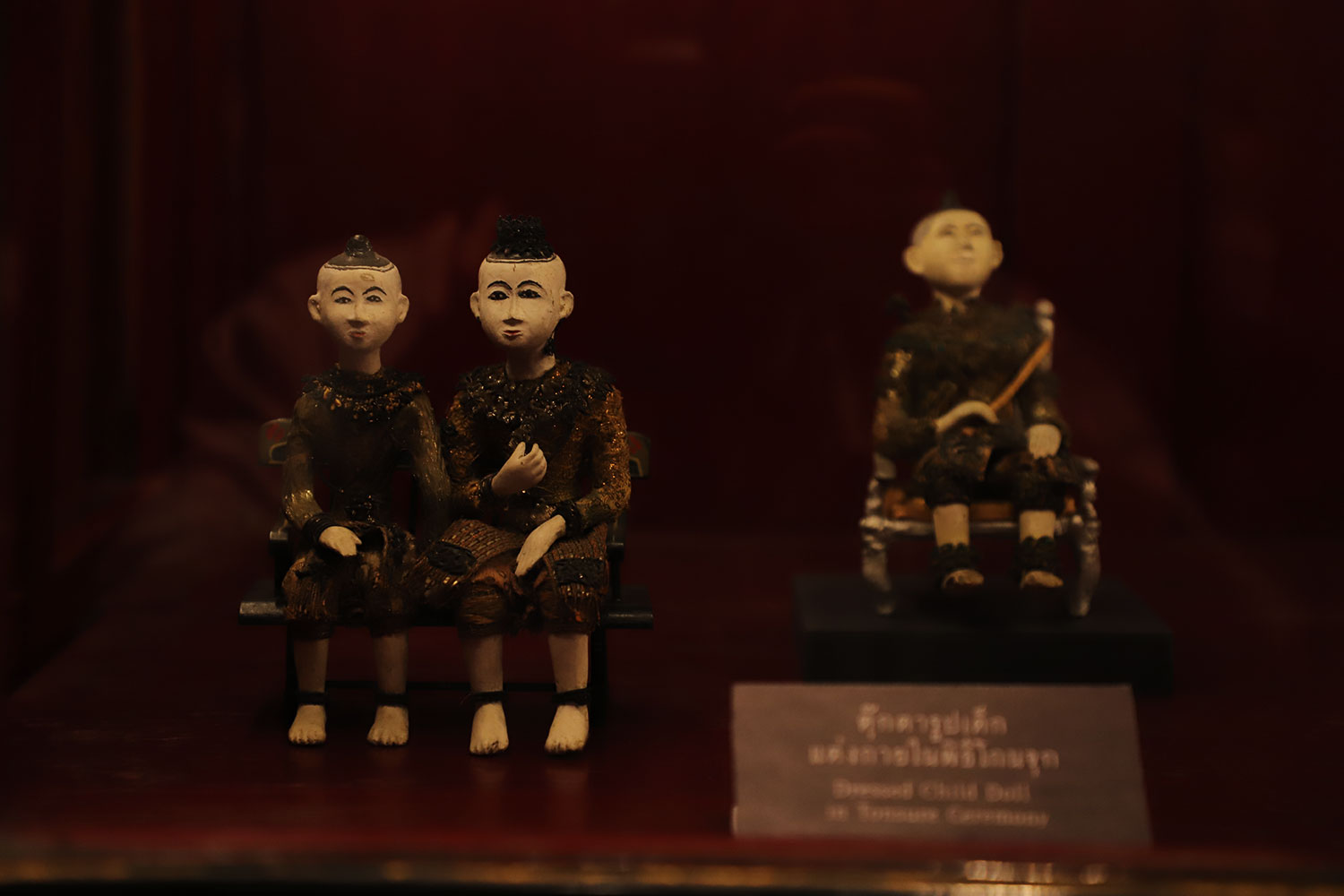 Dolls dressed for a tonsure ceremony.

Since the Red House was previously a queen's residence, all chambers in this building were eventually turned into a lady's house that now displays a wide range of miniature toys as well as household utensils, particularly Benjarong ware.

"It is said that all Benjarong products during the reign of Rama II were the most stunningly beautiful as Queen Sri Suriyendra delicately selected them from China. In this way, all these items were brought back to the Red House to portray a traditional lifestyle, including birth customs, children's toys and tonsures, youth education and betel chewing culture," said Yutthanawarakorn Saengaram, the curator.

The art in this antique house highlights the way of life in the early Rattanakosin period and is more endearing than the museum's other buildings.

Visitors can start their tour in the first zone by learning the backstory of the house through a short video projected on the wall. In the clip, the storyteller is a court lady immaculately dressed in a mauve sabai with a light green chong kraben. The selection of colours for her clothing shows what a noblewoman generally wore on a Tuesday.

Inside the house, there are two bedrooms, both adorned with fresh flower hangers that express Thai women's exquisite craftsmanship and represent their idealised image as a perfect lady in the former era supposedly staying at home and doing the household chores. 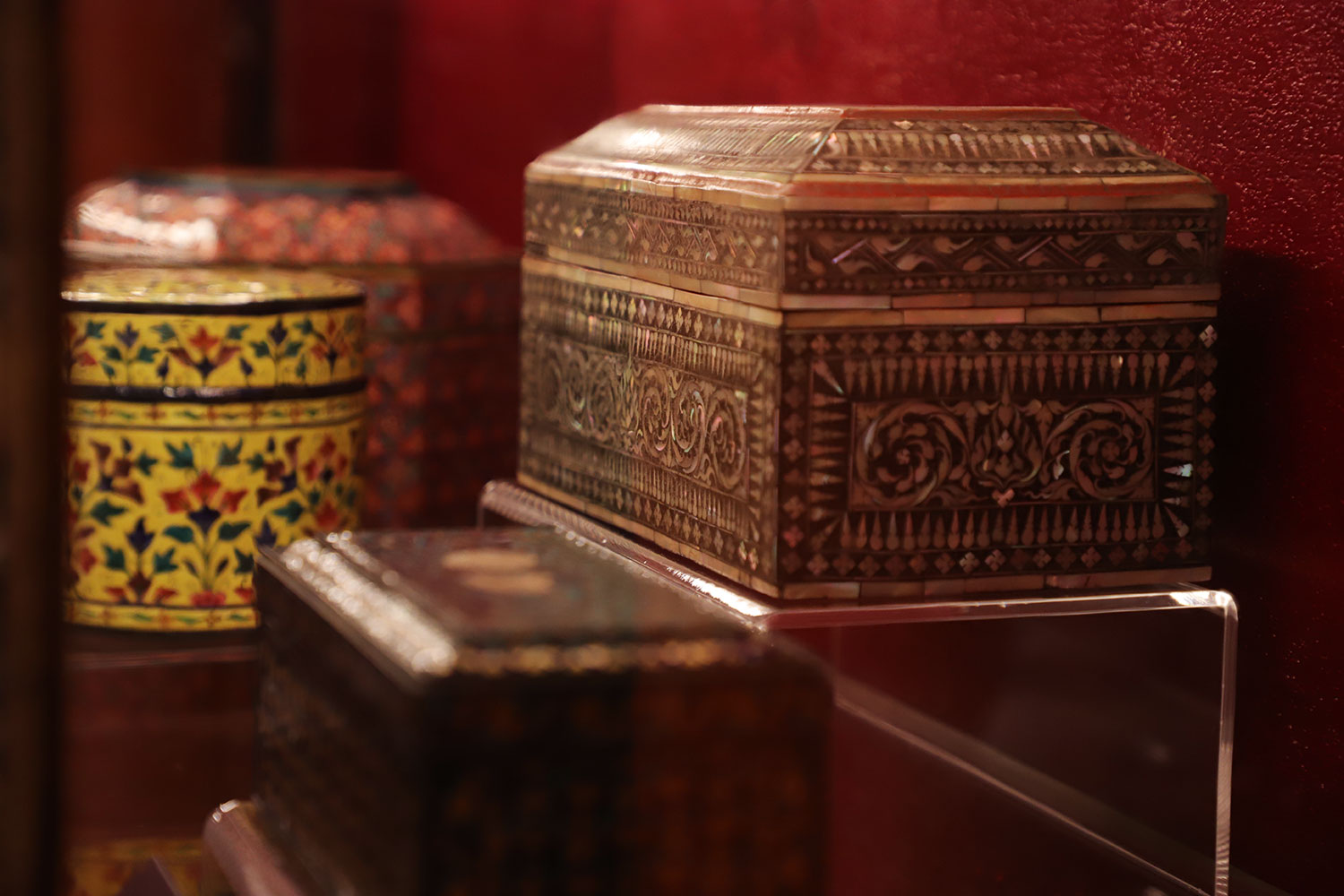 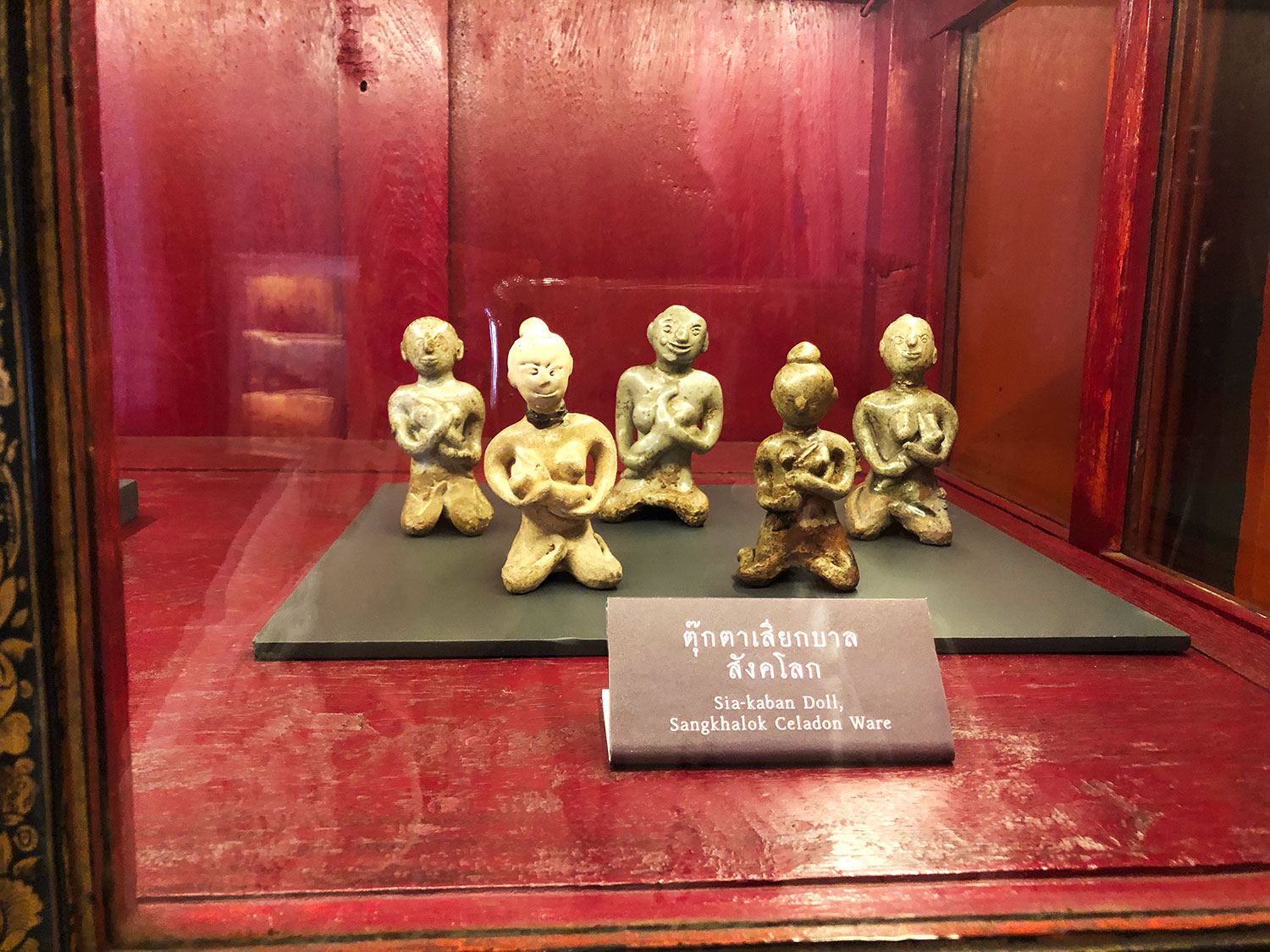 The first chamber is designed to illustrate traditional beliefs about pregnancy and childbirth. In this room, there is rakang kho but, a bell that people who wish for a child will hit to let God answer their prayers. If the wish came true and the king's wife was nearly ready to give birth, the gilded, carved bed phra thaen prasut would be set up for her newborn baby.

This royal bed features a bowl for Kalamet candle lighting and a gilded wooden stool phra kradong on which a cushion phra yi phu in a threshing basket covered with a white tent, is placed. The threshing basket will be used in the ron phra kradong ceremony to protect newborn souls from ghosts. Through this circling ritual, a candle will be lit and placed in the bowl for three or seven days.

Behind the giant wooden bed, there is a cabinet with a collection of sia-kaban or "losing-head dolls" that reflect conventional belief ghosts could possess humans.

Originated in the Sukhothai era, these tiny ceramic dolls were made from clay and shaped into a mother sitting straight and holding a baby. In the religious ritual, the doll's head was knocked off to deceive the devil into thinking that its owner and her child were both dead.

Back then, women had a higher risk of death in childbirth. In the past, mothers had postnatal care by lying on a phra thaen banthom phloeng, a wood litter in front of a fire pit, for a few weeks to rejuvenate the skin and the body. 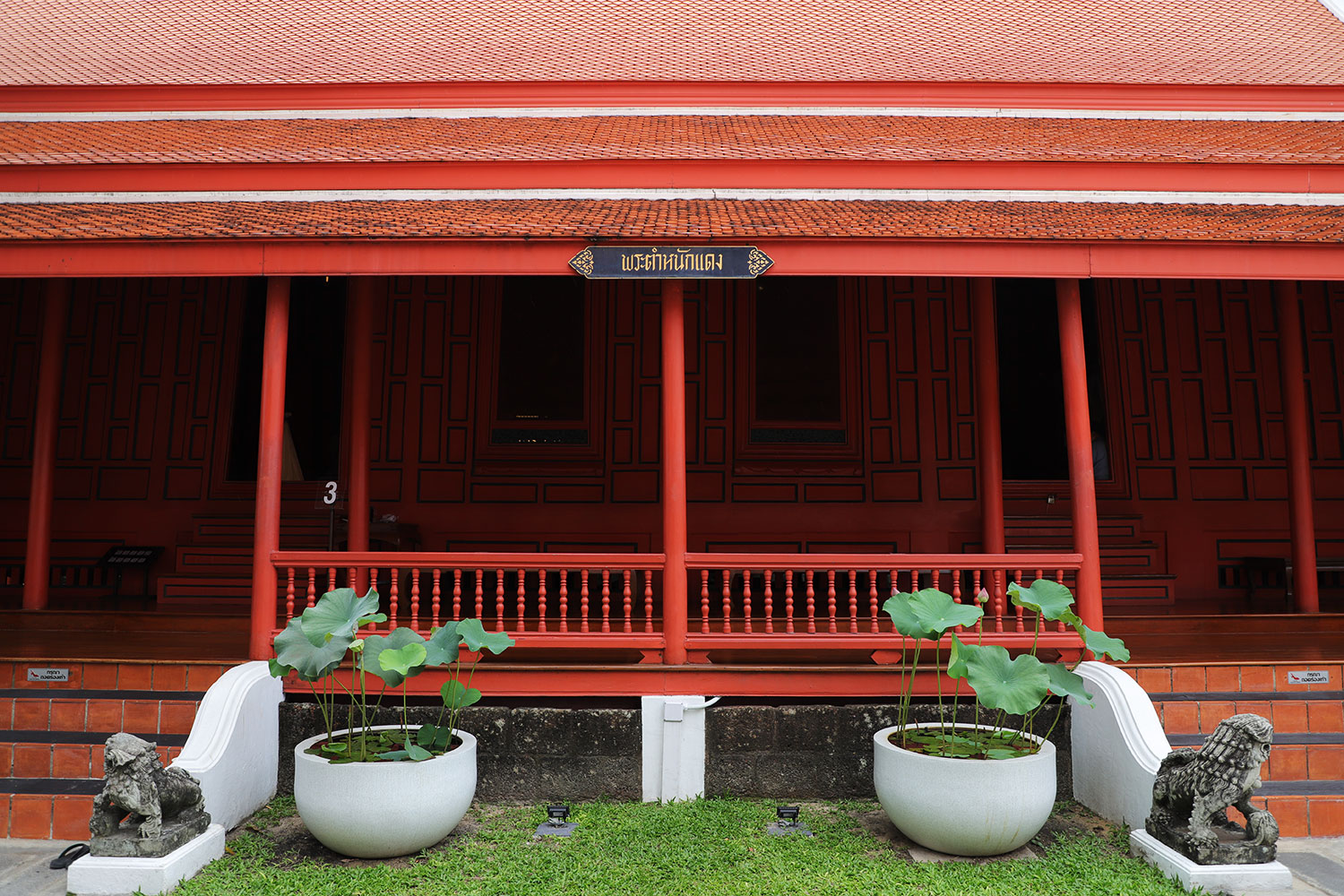 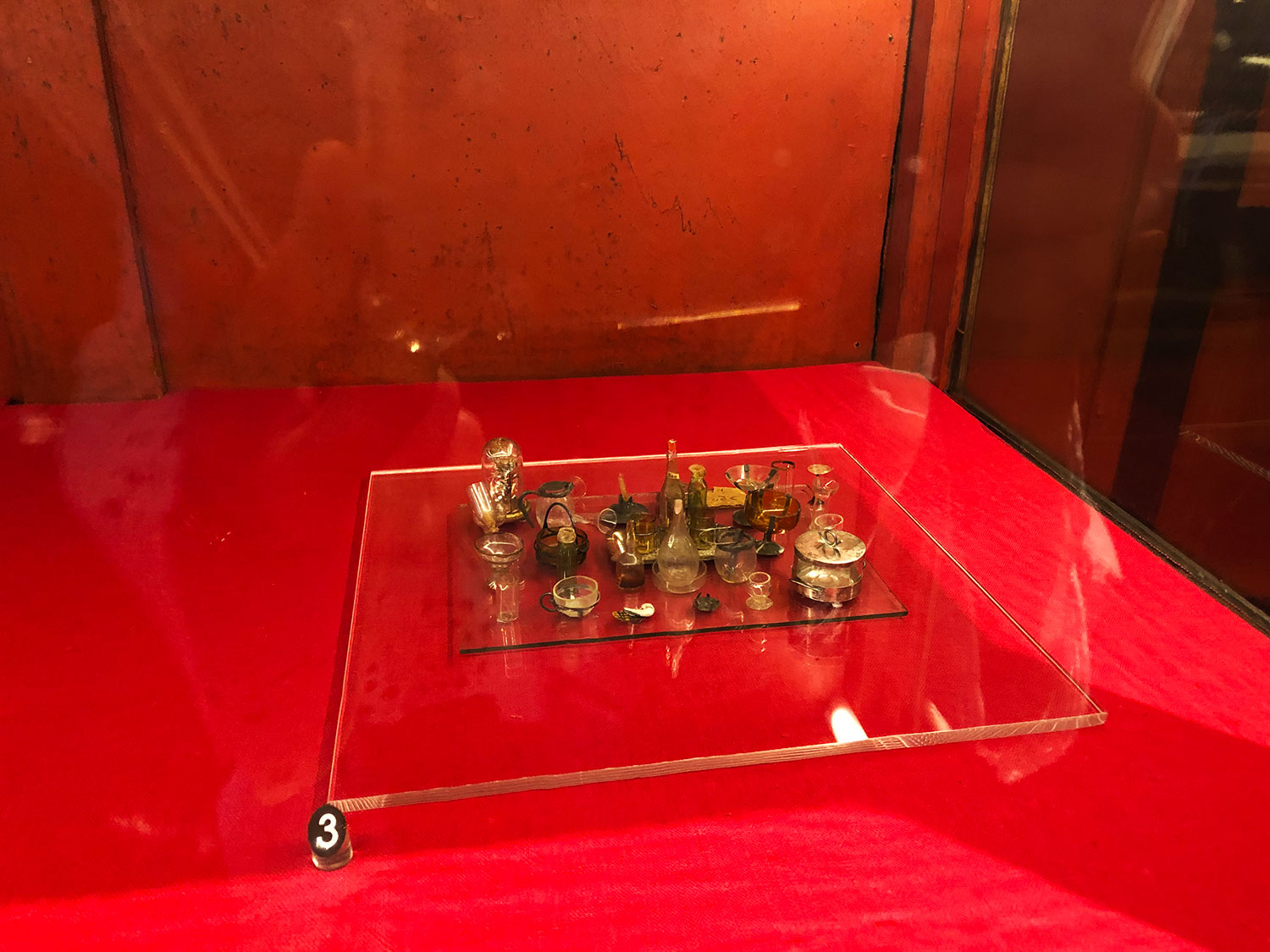 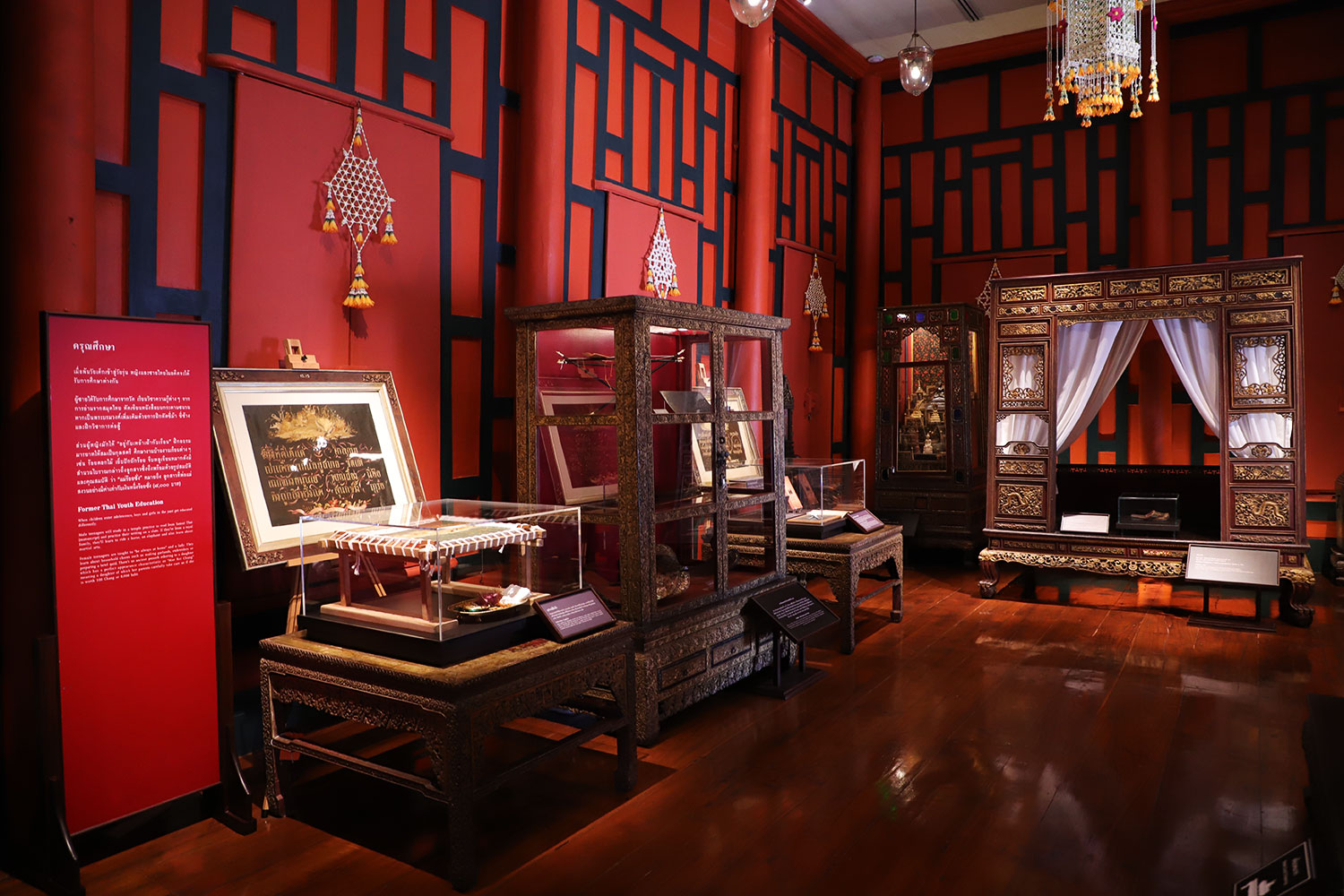 Inside the second room. At right corner is Chongchit-Thanom Diskul’s Chinese bed with singha legs. 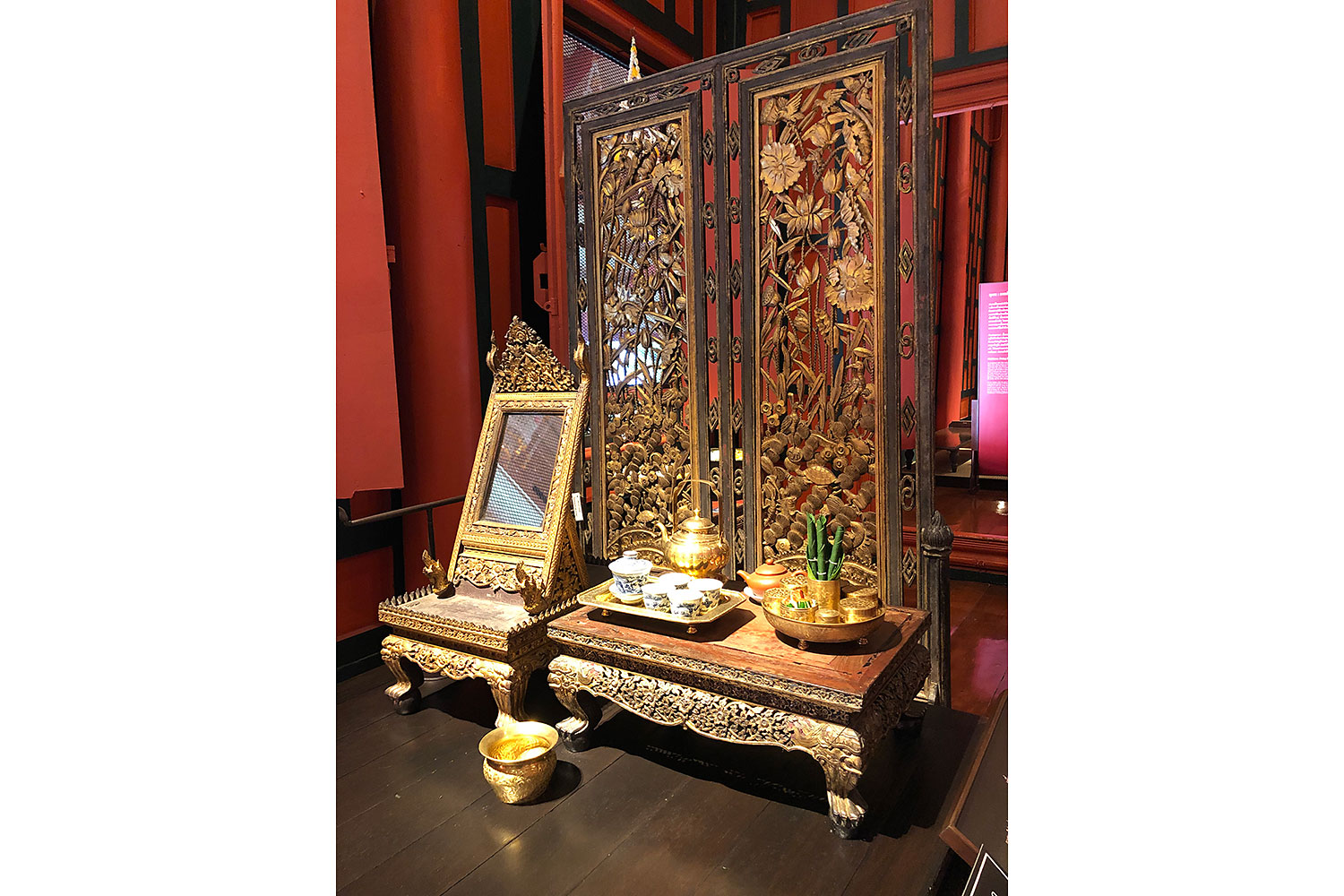 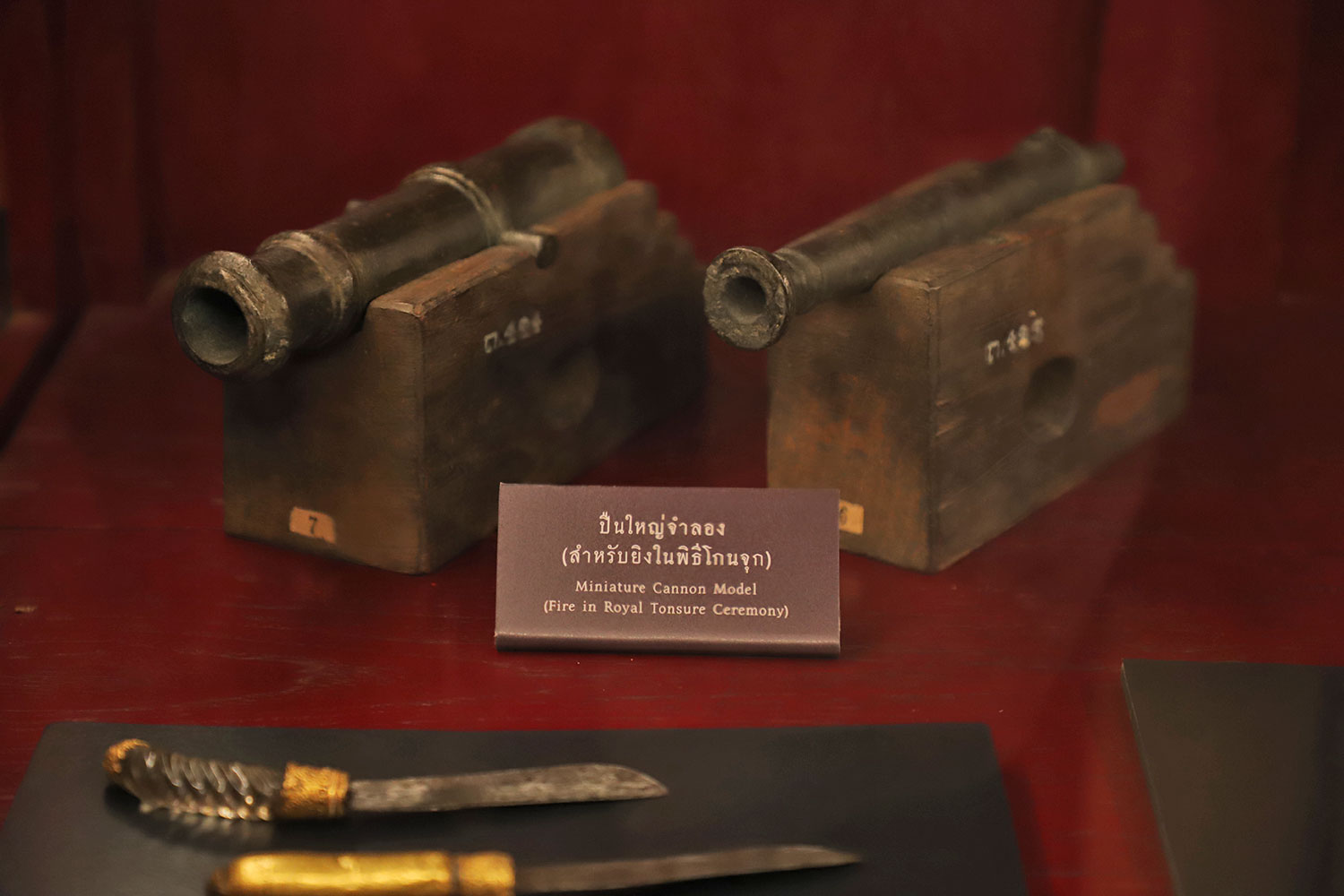 A miniature cannon fired during a royal tonsure ceremony. 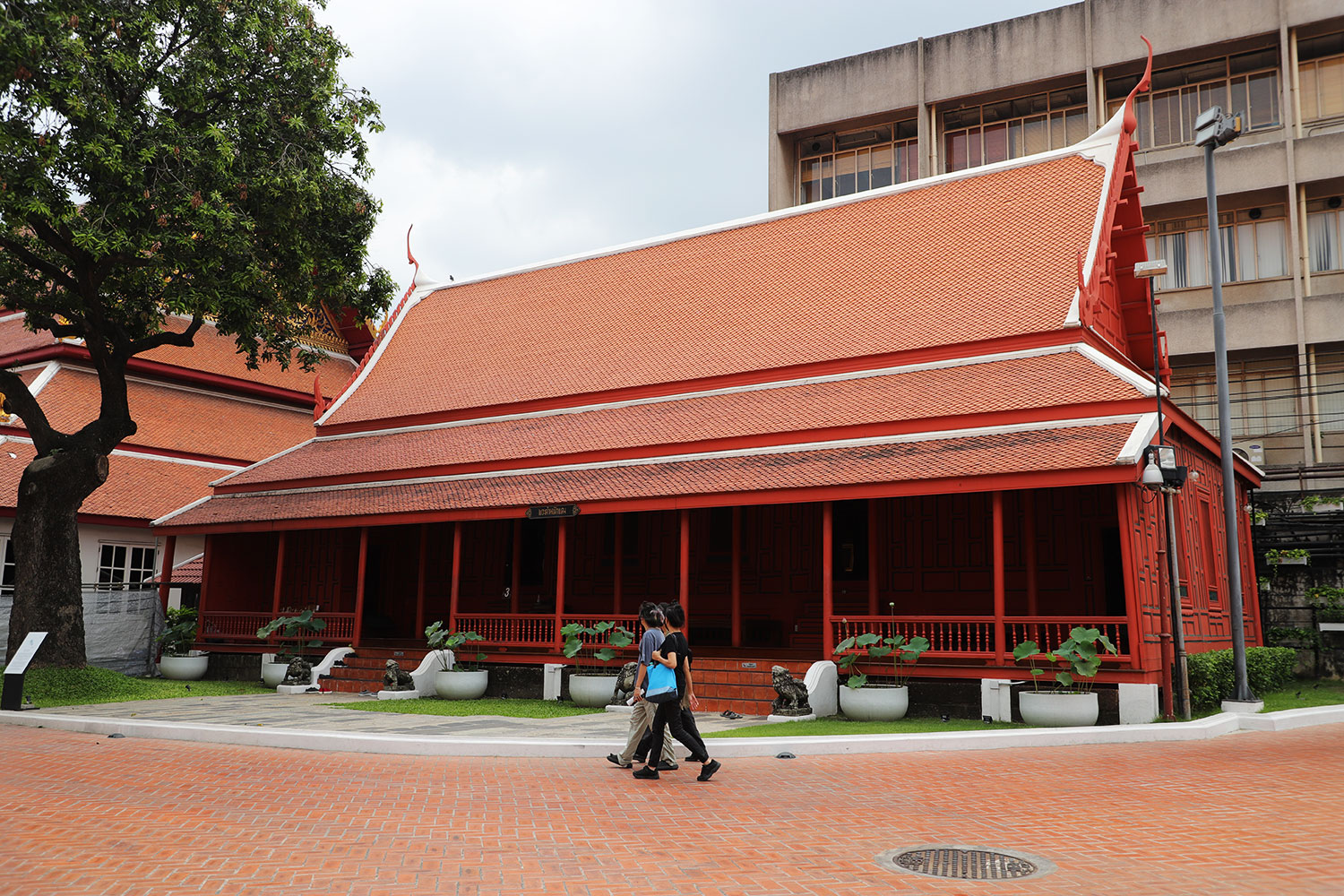 "After a month, the baby would be safe from any danger. They didn't have to sleep in a tent any more. They would sleep in the crib. However, the prince or princess would be ceremonially put in a phra au, or cradle, which is made of weaved bamboo. In the royal ceremony, one person sings and lulls the baby to sleep, while two others played the three-stringed saw sam sai and damaru drum," said Yutthanawarakorn.

"On the cradle beam, there is a mae sue talisman to protect the infant from evil spirits. The front side of the talisman is the birthday guardian, while the back is Vaisravana, the king of demons. If the baby was born on a Tuesday, the mae sue would be Lady Yakbrisut with a buffalo head."

Another important rite for royal children is the passage to adolescence. To mark this early childhood development, the Red House exhibits a set of tiny topknot child dolls finely carved from ivory, and miniature cannon models, including other unusual items used in the tonsure ceremony such as holy water pots and conch shells.

"When girls reach the age of 11 and boys turn 13, the sokan or topknot-cutting ceremony is held. As you can see, those topknot child dolls on the first shelf are fully dressed, holding krabong phet, a palm leaf in their hands. This is Indra's weapon to prevent giant yak guardians from ruining the ritual," the curator explained.

"When cutting the topknot, the hairs are divided into three portions. Accordingly, there are different types of mit sokan or shaving knives to cut the hairs. Each knife handle was made from different materials, which bring fortune to children such as gold, rose gold and glass," he added. 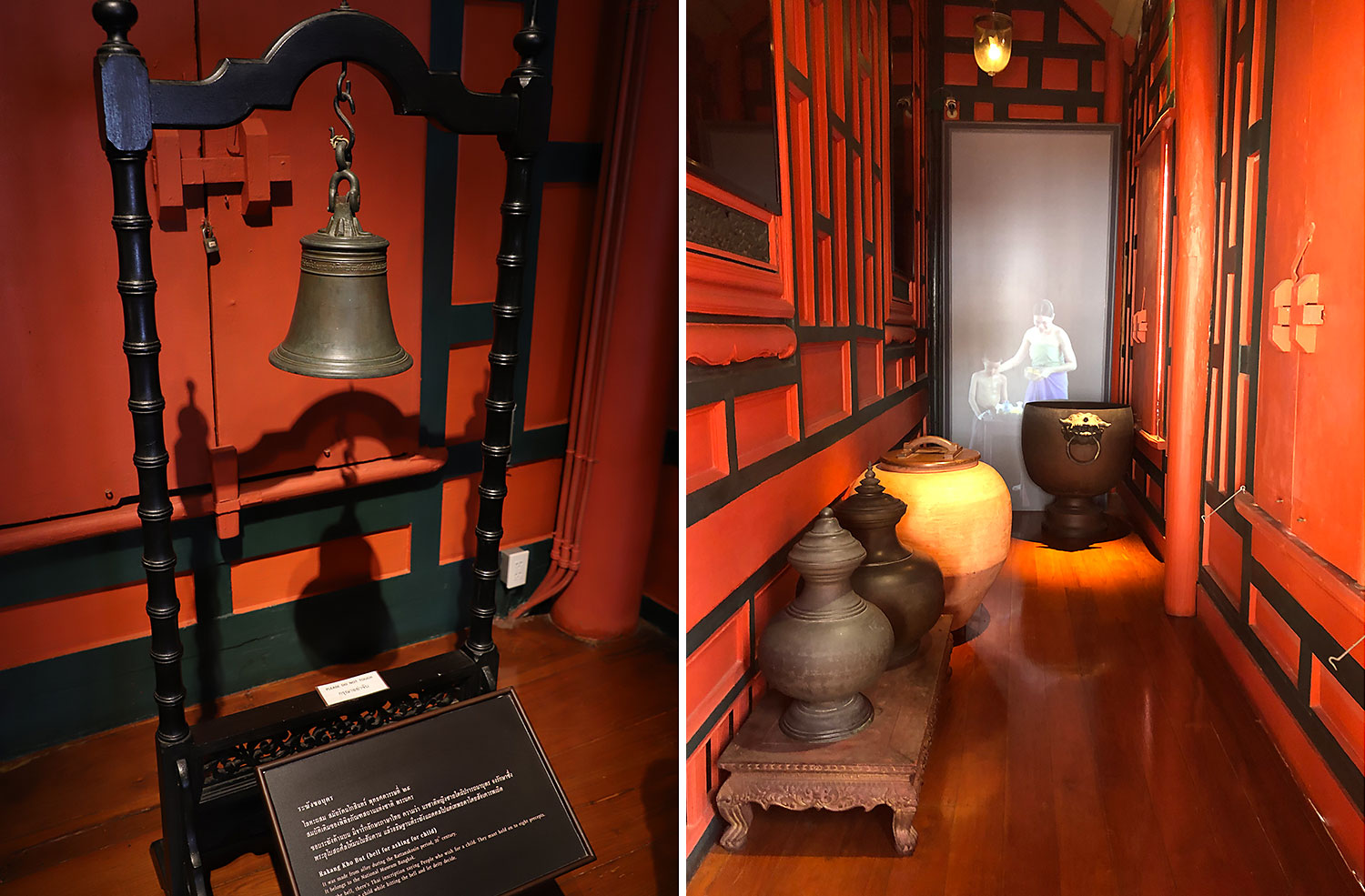 From left: Rakang kho but; Bathroom in Phra Tamnak Daeng. 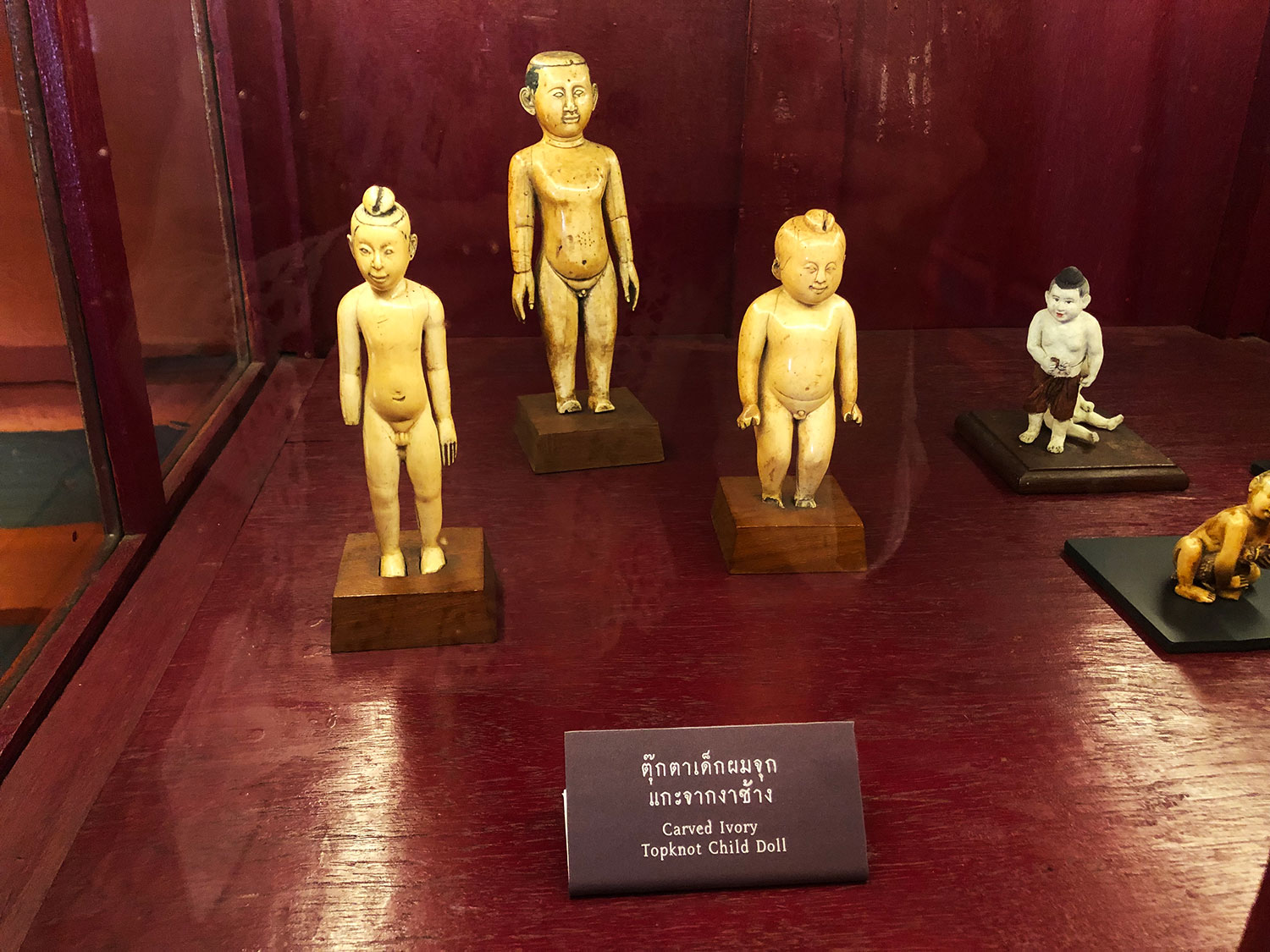 The second room is arranged to recount the different events of female and male teen life. Vividly decorated in a Chinese-Thai style, this bed-chamber features the gilded golden, canopy bed with singha legs, including a large set of martial art supplies and embroidery tools with betel receptacles.

When boys enter adulthood, they will practise their handwriting on a black slate and learn to read from Samut Thai, a folding-book manuscript that contains a wide variety of knowledge and epic poems such as Jindamanee. If they are from the upper class, they will also study both liberal and martial arts, and train to ride a horse and an elephant.

Meanwhile, teenage girls will learn decorative needlework and develop their culinary skills to become future housewives and mothers, along with preparing beautiful betel quilts for momentous events such as a wedding ceremony. In the past, every household had a betel container, a chian mak, as a symbol of social status. Aristocrats carried their betel trays to show their status when visiting the king.

"In Thailand, there are many different types of betel receptacles. For example, khong mak is a round-shaped box with a lid. Ki mak is a container with a tiny drawer inside, and hib mak is a square-shaped box. The rest are spittoons and trays made from soapstone, gold niello or silver," Yutthanawarakorn explained.

The last highlight is Chao Chom Liam's dollhouse, complete with toys and miniature kitchen utensils that shows children's play in imitation of adult activities in the 20th-century Rattanakosin period.

"This toy house reflects life transitions. Previously, we lived in a traditional house. Now, we live in an apartment. Still, Thai customs and cultures remain. For example, there is a prayer room. Even in the kitchen, there is a lacquered cabinet, a glazed jar and a rabbit coconut grater. So this combines Thai and Western lifestyles together. The dollhouse was assumedly completed in the reign of Rama VII as most of the photographs hanging on the wall were taken during this period," he said.

Moreover, the Red House relates the way of life through a complete series of traditional cookware, bakeware and tableware, including a Buddha altar and instruments, given by Chao Chom Liam, Rama V's concubine. Some utensil miniatures in this collection were made from glass syringes and crafted by her since these tiny furniture models were not widely available in that era.