Prologue to the past
Travel

Prologue to the past

Sitting on the banks on the Khwae Noi River, the Ban Kao National Museum offers visitors a glimpse into the lives of people who lived more than 4,000 years ago

published : 28 Apr 2022 at 04:00
newspaper section: Life
writer: Pattarawadee Saengmanee
A cave simulates how prehistoric people lived in the jungle between 4,000 and 750,000 years ago.

Following a massive five-year makeover, the modern red-ochre compound of Ban Kao National Museum rises in the middle of vast green landscapes and rice fields on the banks of the Khwae Noi River, serving as a prologue for a day trip to explore Prasat Muang Sing Historical Park, which is about 10km away.

Situated in the popular resort town of Kanchanaburi, the three-storey cube-shaped building with many holes in the walls is reminiscent of archaeological pits, which have been heaped with stratified soils from various periods. It integrates innovative modern technology, mixed media and lighting design so that people of all ages can participate in entertaining, interactive experiences while learning about the history.

Its origins lie in World War II, when Dutch archaeologist Hendrik Robert van Heekeren was apprehended by the Japanese army while conducting research in Indonesia and taken to Kanchanaburi to construct the infamous Death Railway. There, he unearthed archaic stone tools near the Ban Kao railroad station and delivered them to Prof Hallam Movius of Harvard University in the United States for investigation after the war. 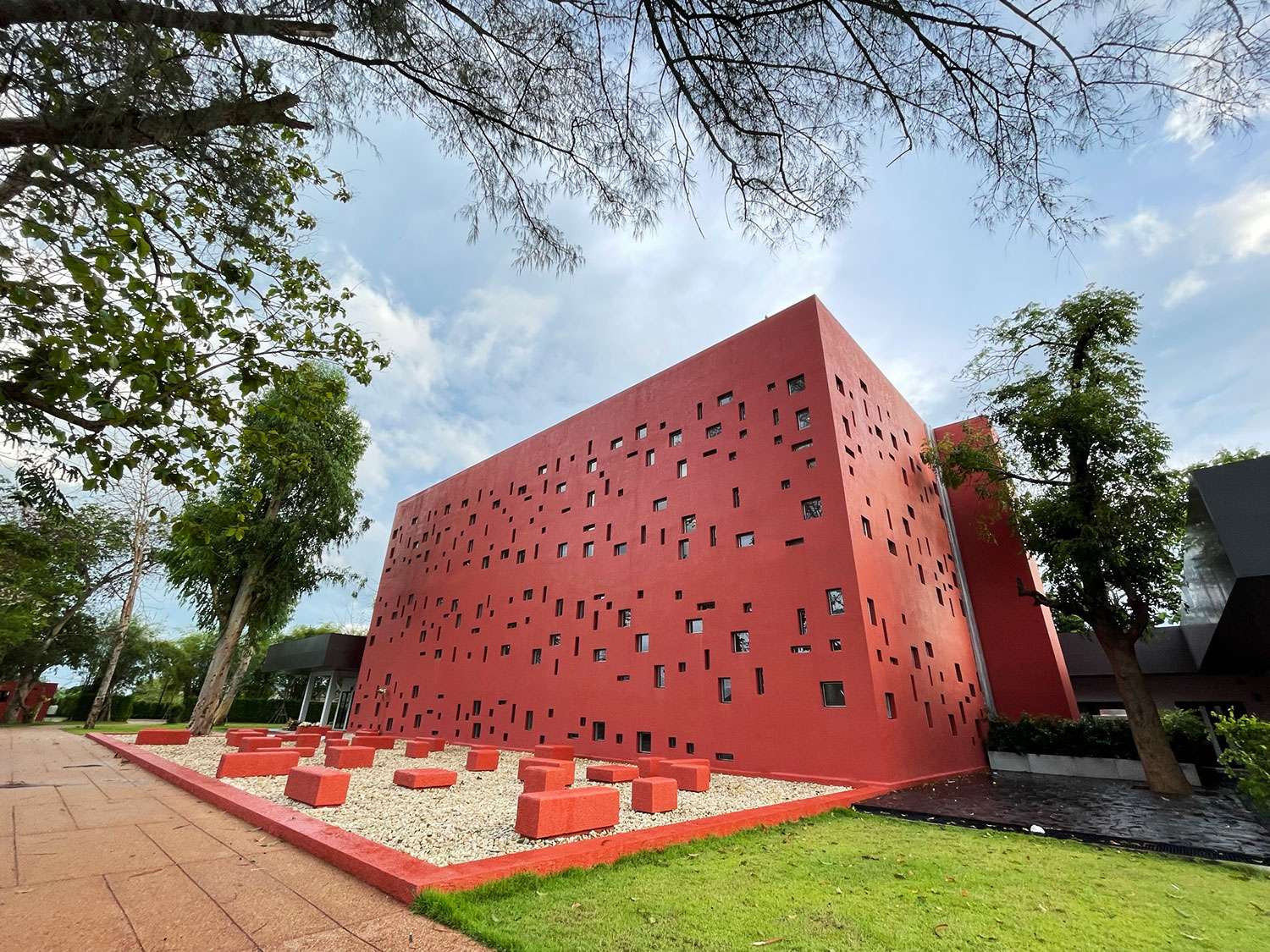 The contemporary design of the Ban Kao National Museum is influenced by archaeological pits. 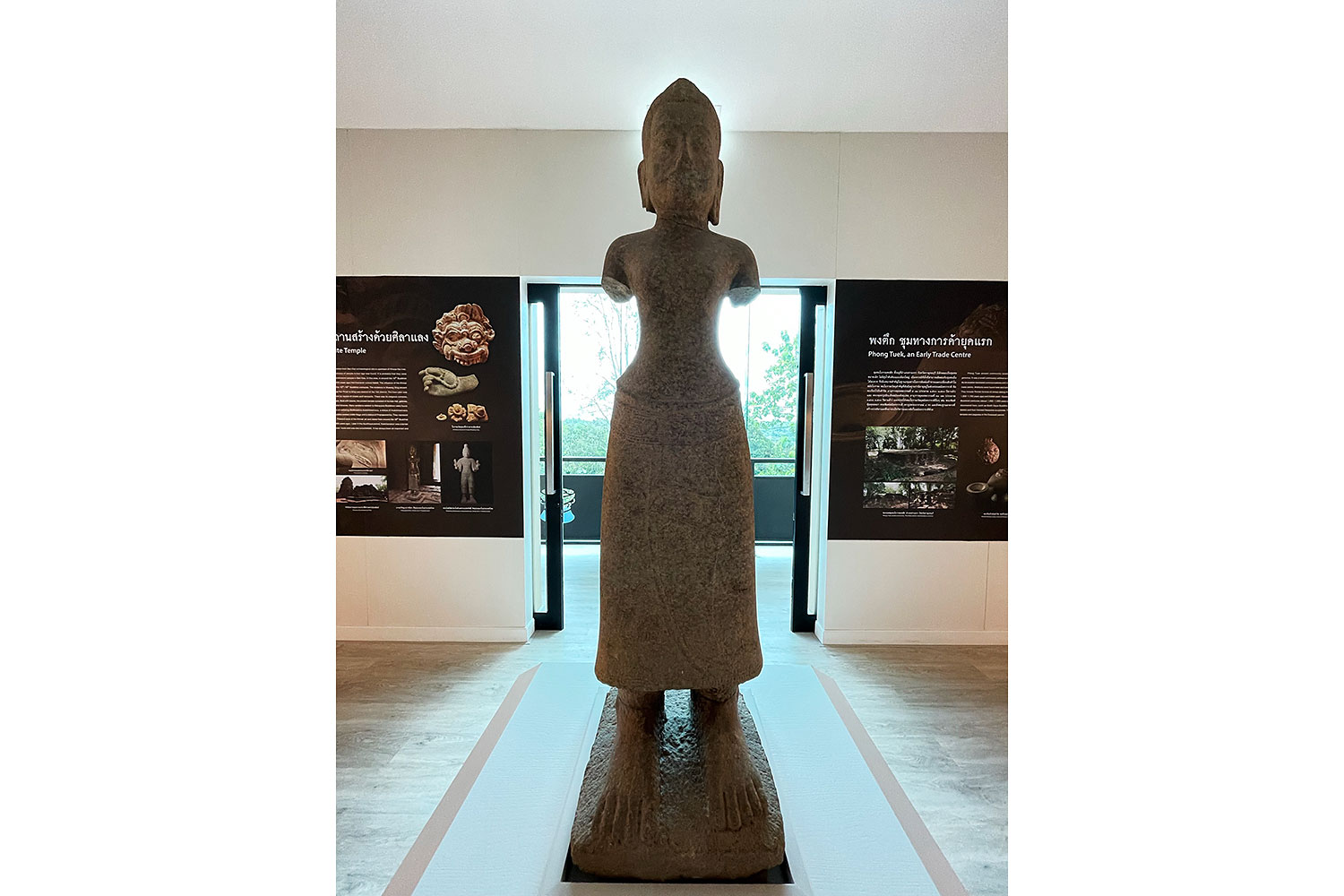 A Khmer-style sandstone statue of Prajnaparamita crafted in the 13th century. 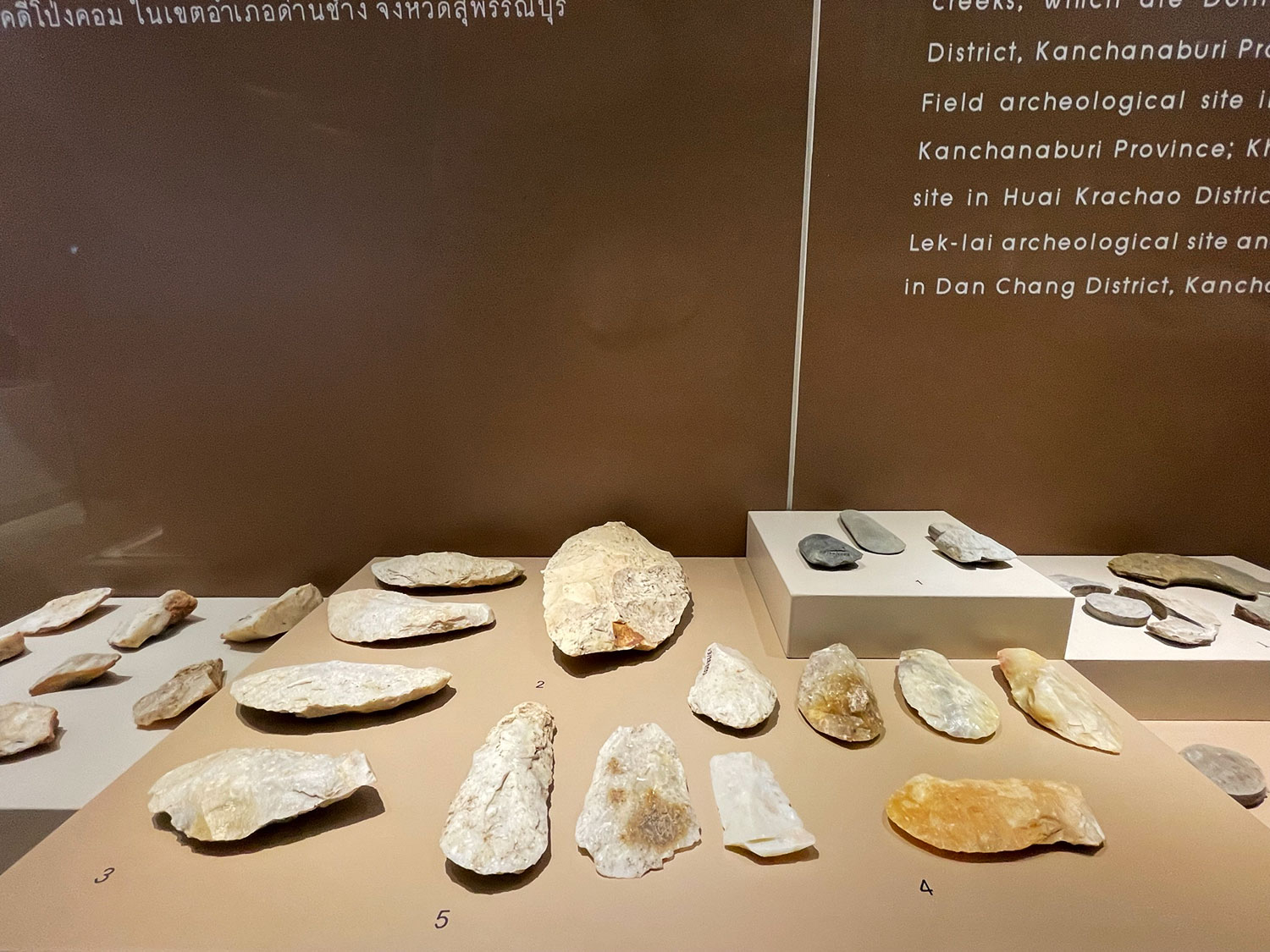 His discovery sparked the Thai-Danish Prehistoric Expedition project between 1960 and 1962. It was Thailand's first international-standard archaeological excavation effort, which prompted expeditions and excavations all around the country.

Initially, the museum opened in 1965 as three single-storey buildings to hold prehistoric items discovered during excavations in tambon Ban Kao and nearby sites in Kanchanaburi. However, the museum was 30km from downtown and its exhibition gave only brief details that were difficult to grasp for anyone unfamiliar with history or archaeology, putting it off the tourist path.

With a new look that imitates the layered soil seen in archaeological trenches, the exhibition is now divided into three zones to showcase a wide collection of artefacts, ranging from the oldest to the newest.

As we walk through the entryway, it feels as if we're sinking deeper into a hole and the ground is cracking to show what's under its surface.

On the 1st floor, visitors have a chance to see a replica of eight iconic ancient stone tools found by van Heekeren in 1943, thanks to advanced 3D laser scanning technology. According to the first analysis, some of them were made between 4,000 and 750,000 years ago, and the duplication file was completed with the aid of Harvard University's Peabody Museum of Archaeology and Ethnology. 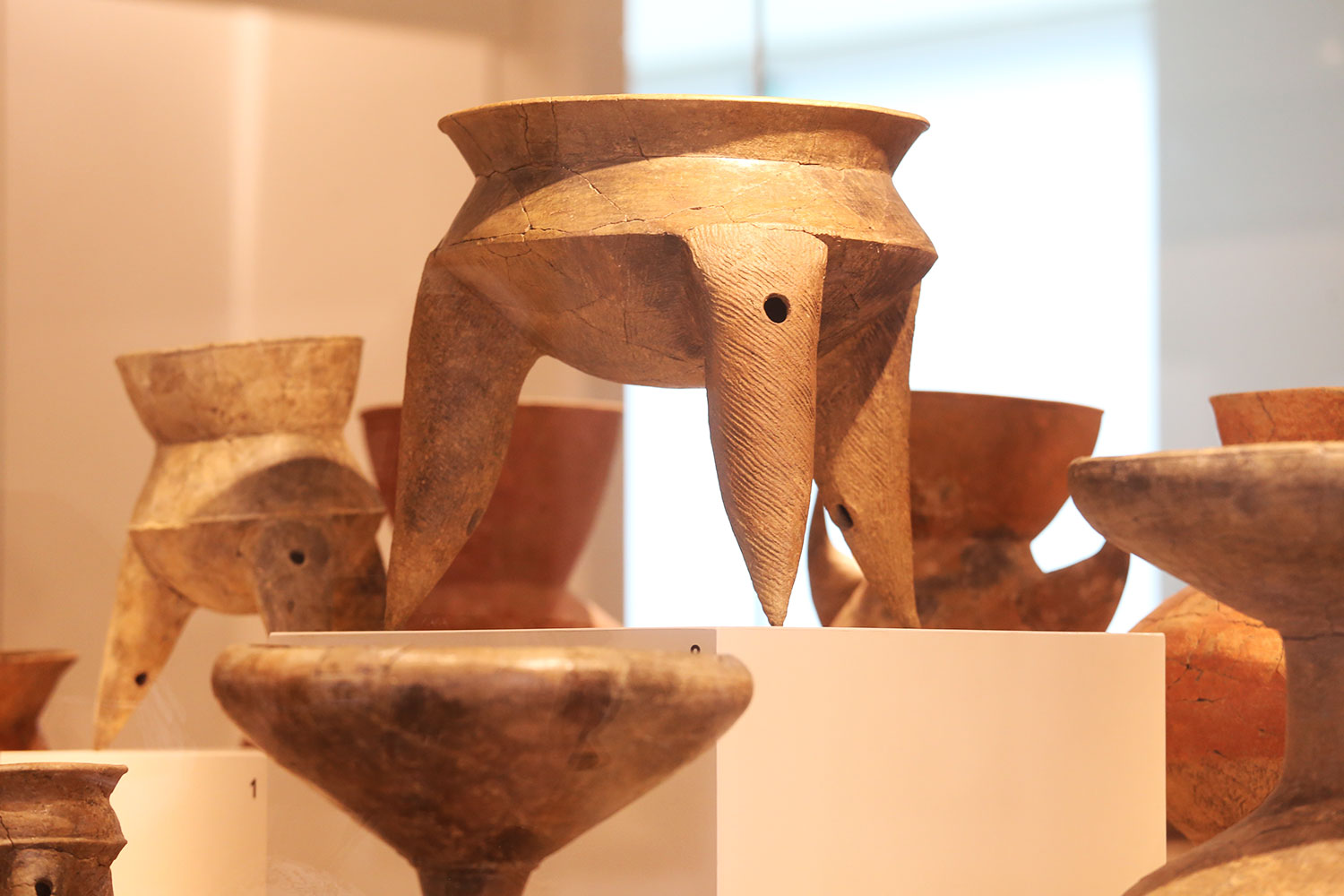 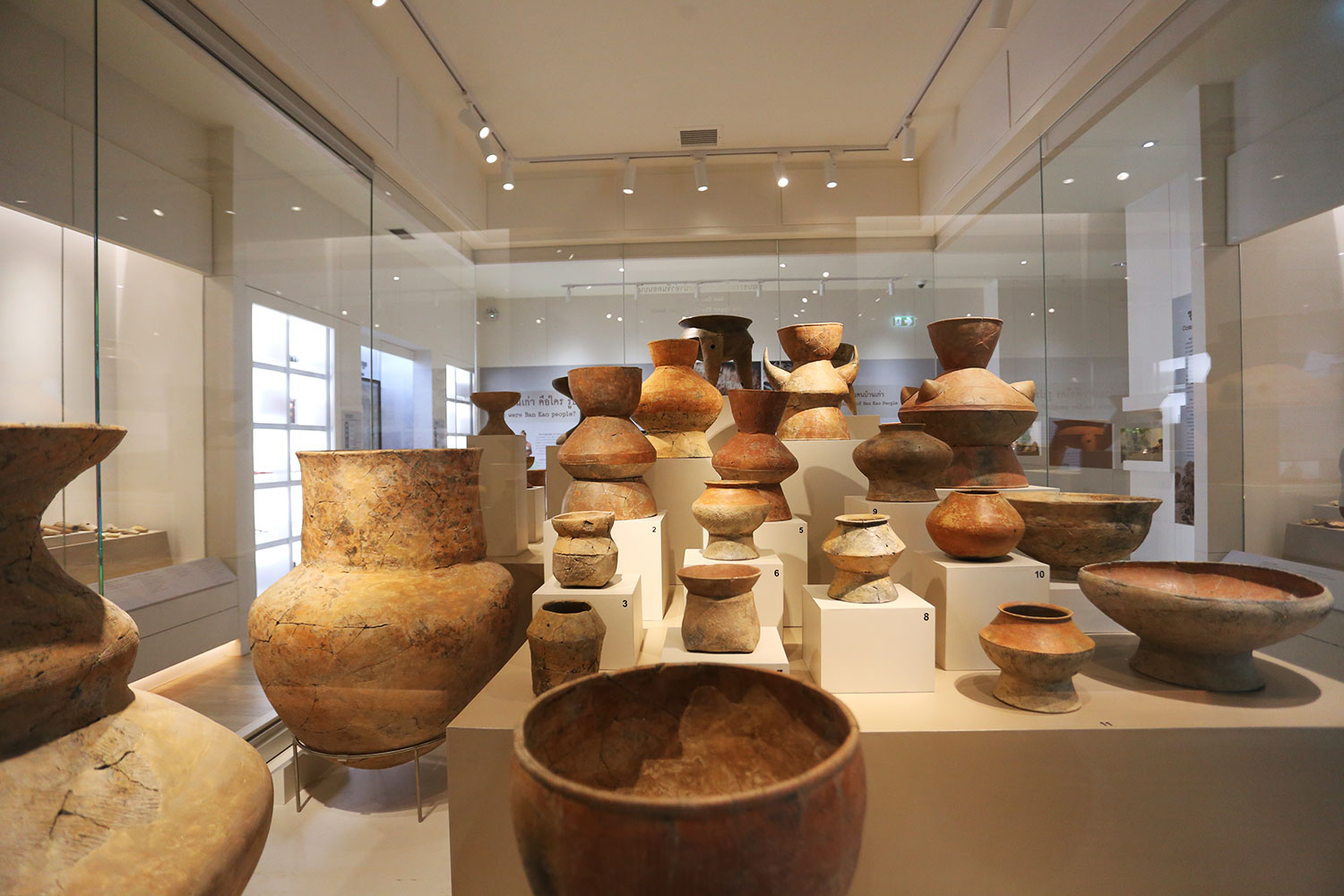 You can also take a front row seat in a mini-theatre and watch a 17-minute documentary film with special visual effects about the first Thai-Danish Prehistoric Expedition project in the 60s, while a group of leading Thai archaeologists and historians share their expertise.

Then you can pretend to be a paleontologist and look up the next destination on a large map depicting the locations of important archaeological sites in Kanchanaburi, Suphan Buri and Ratchaburi, where you might find prehistoric communities.

The lights are dimmed and a murky spiral walkway leads visitors to an ancient cave, in which time travellers can trace the footprints of primitive humans who lived as far back as 750,000 years ago.

The room is set in a dense jungle along the banks of the Khwae Noi River and the walls are fitted out with an innovative 3D projector to illustrate how people lived by hunting and foraging. They didn't stay in one place for long, instead moving around in search of plentiful food supplies.

Seasonal changes are made to the locations. During the summer, for example, a shelter was built in open fields along the river, while during the rainy season and winter, living in cave and rock shelters would protect people from the elements. They learned to make tools from their surroundings, and used stone and mussel shells for cutting meat and made yarn for clothes. 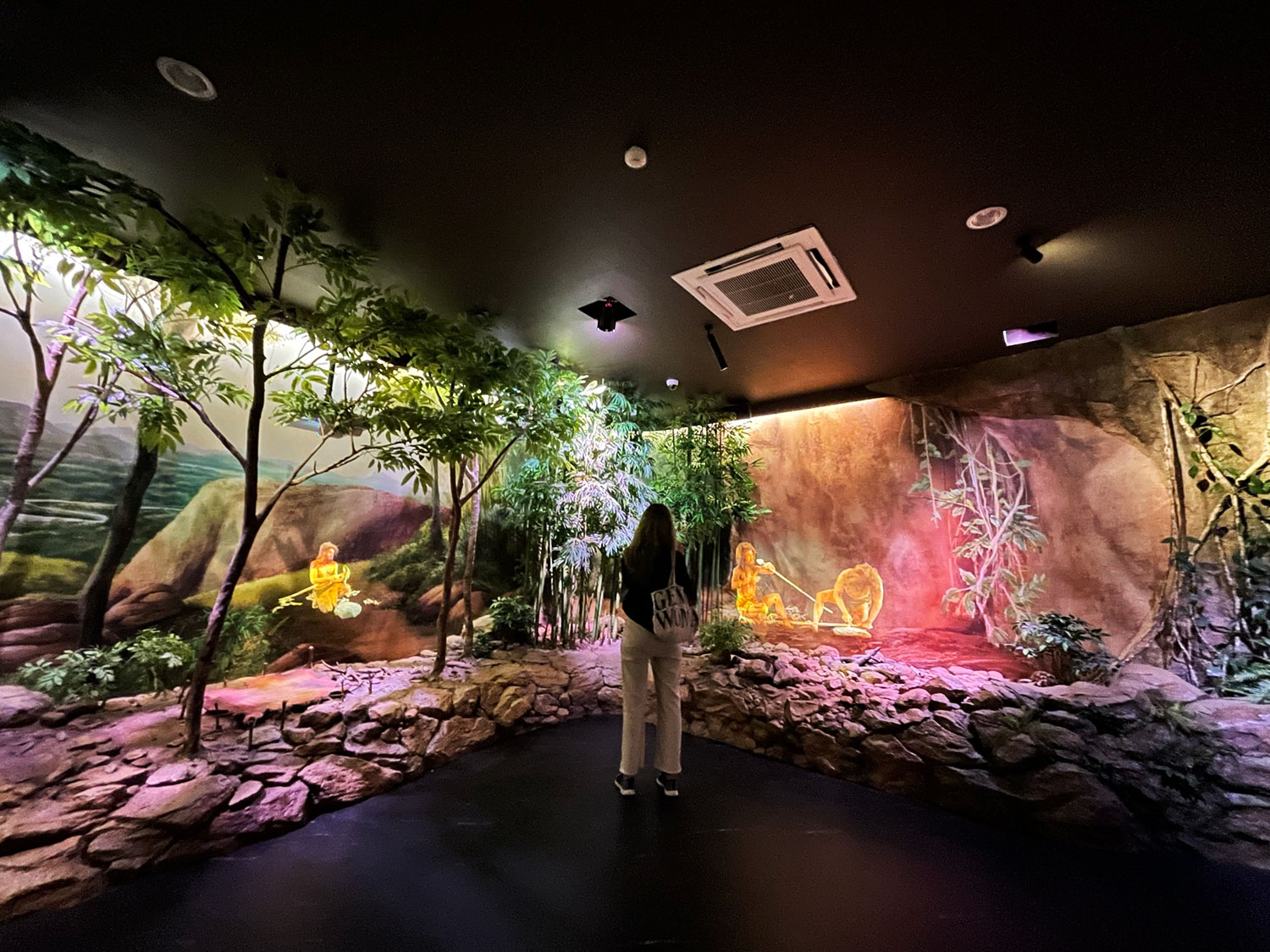 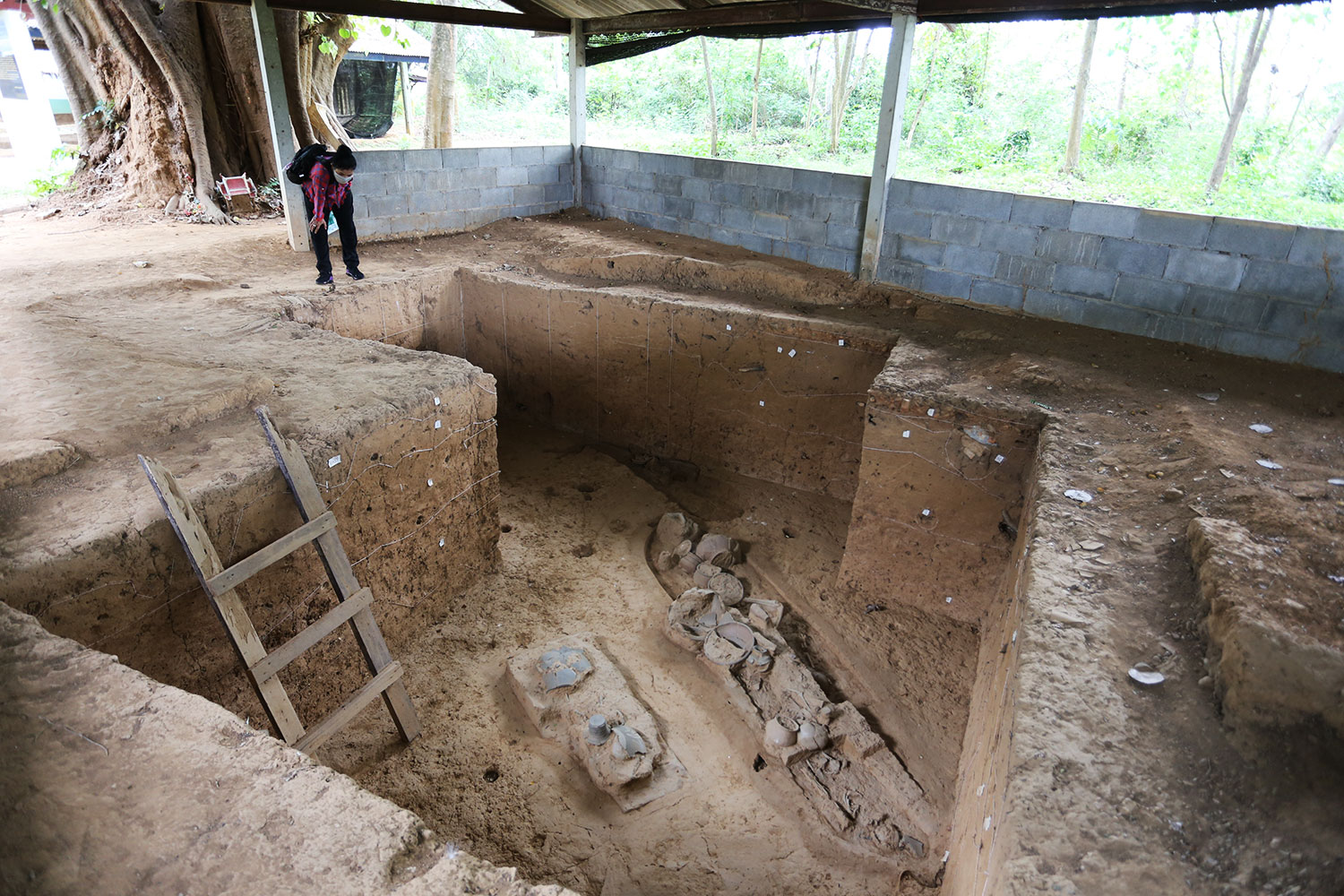 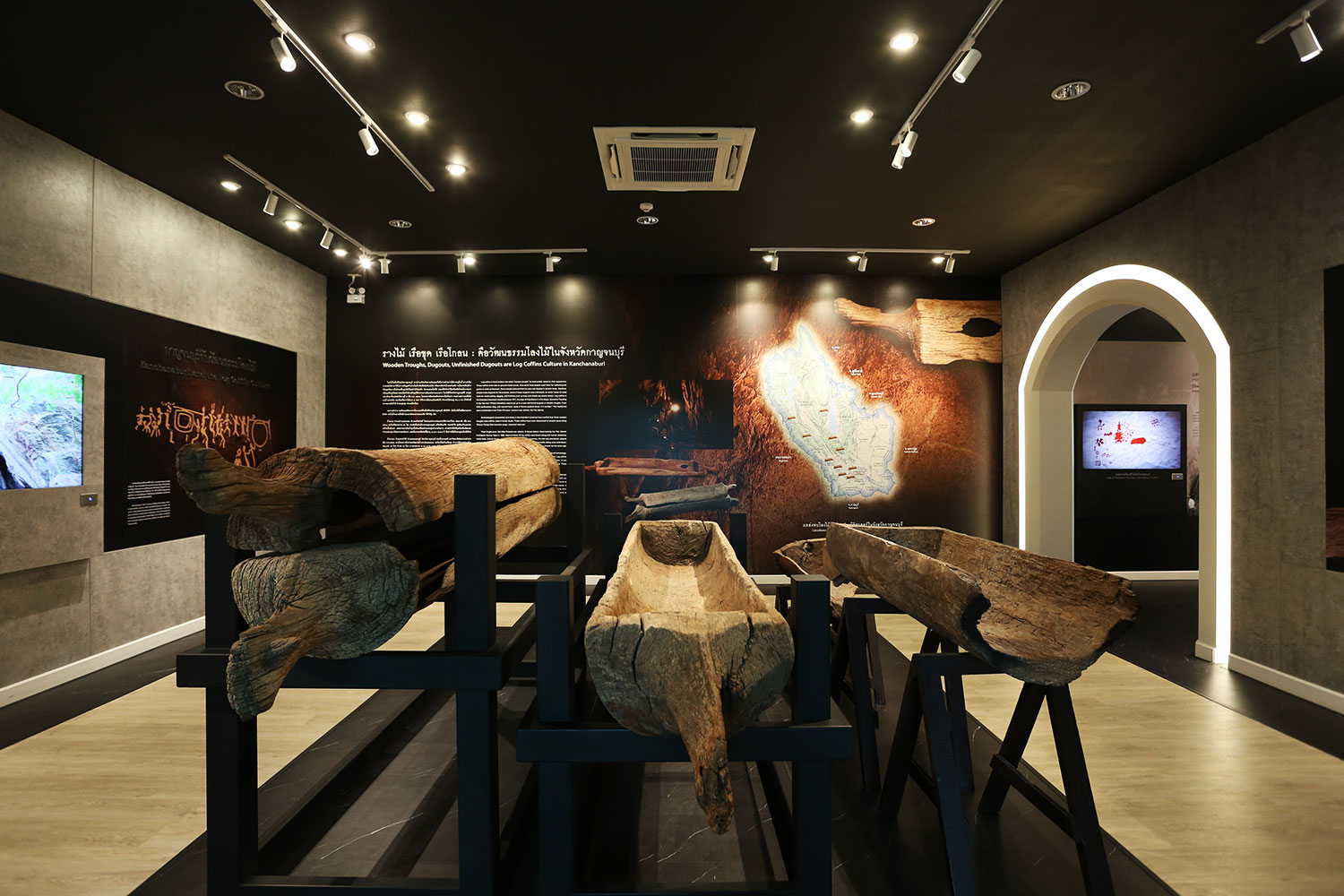 The bodies of important people were encased in wood coffins and buried in caves during the Iron Age. (Photo: Saranyu Nokkaew)

In Kanchanaburi, a human skeleton dating from 5,000 to 9,000 years ago was discovered in the Phra Cave, which is located in Sai Yok district, making it the oldest skeleton in the western region. Its legs were bowed and Hoabinhian core tools were buried in the same tomb. According to analysis, this skeleton was a hybrid of Mongoloids and Australo-Melanesians (islanders).

Digging deeper, the 2nd floor is lined with a diverse collection of artefacts, stone tools and jewellery that reflect Ban Kao culture and the ancient lifestyle of early agricultural society dating back 4,000 years ago.

The Ban Kao civilisation is identified as a Neolithic agricultural society. According to archaeological evidence, prehistoric people arrived in Thailand's western region and began to form villages, where they could reside in their permanent houses around Khwae Yai and Khwae Noi rivers as well as the upper part of the Tha Chin river basin.

On view is a selection of ancient polished adzes, stone blades, stone knives, woven cloth, wickerwork, arrowheads, hooks and chisels made from animal bones as well as other jewellery made from seashells, corals and elephant tusks, which show their wisdom in crafting finer tools and ornaments between 3,000 and 4,000 years ago.

"The Thai-Danish Prehistoric Expedition initiative led to the discovery of the Ban Kao civilisation. People may have immigrated from the southern Chinese area of Yunnan and settled in Thailand between 3,000 and 4,000 years ago, according to antique containers and bones of Mongol people. The majority of people grew rice on plain ground near rivers and they figured out how to hunt with animal bones," said curator Prachya Rungsaengthong from the Fine Arts Department. 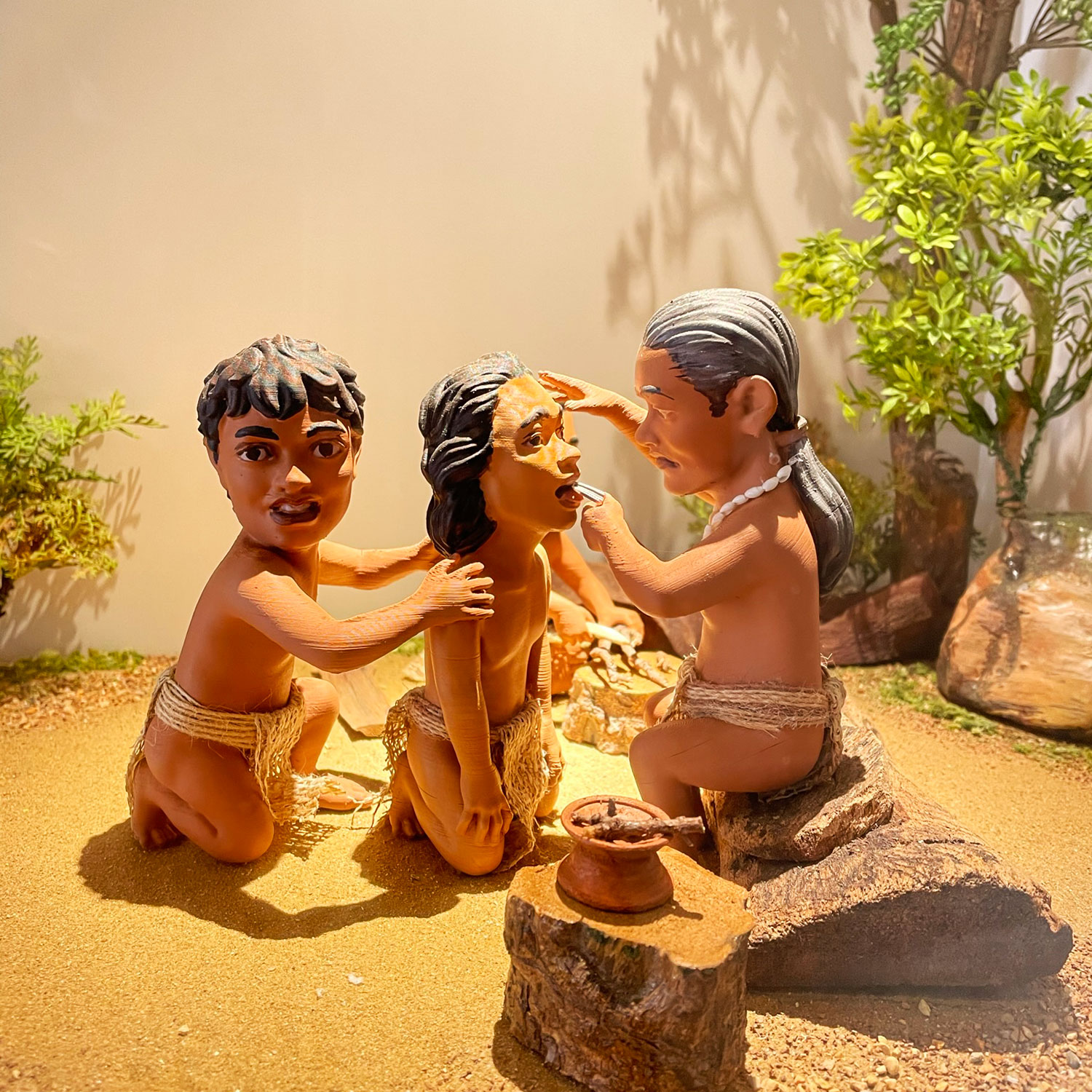 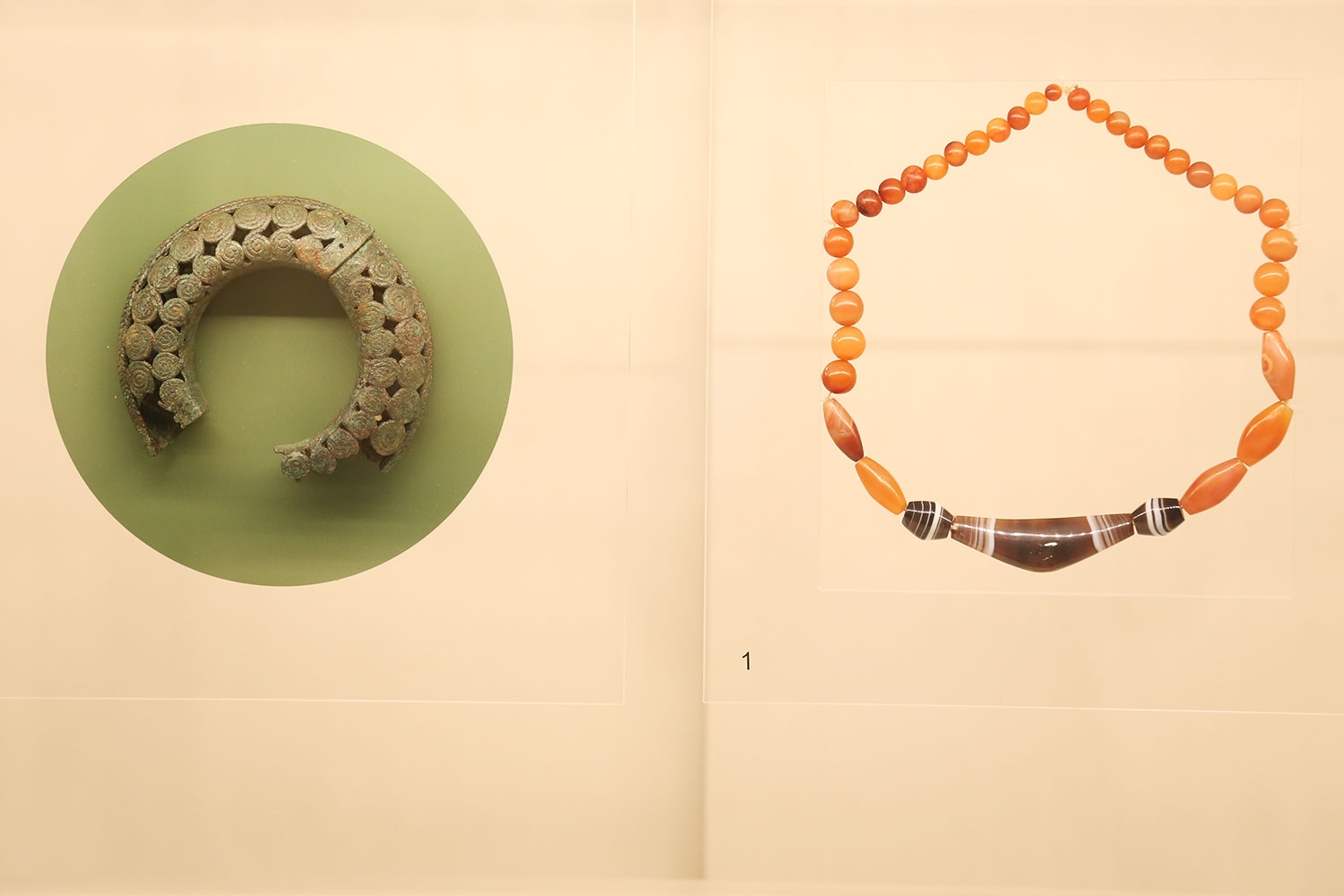 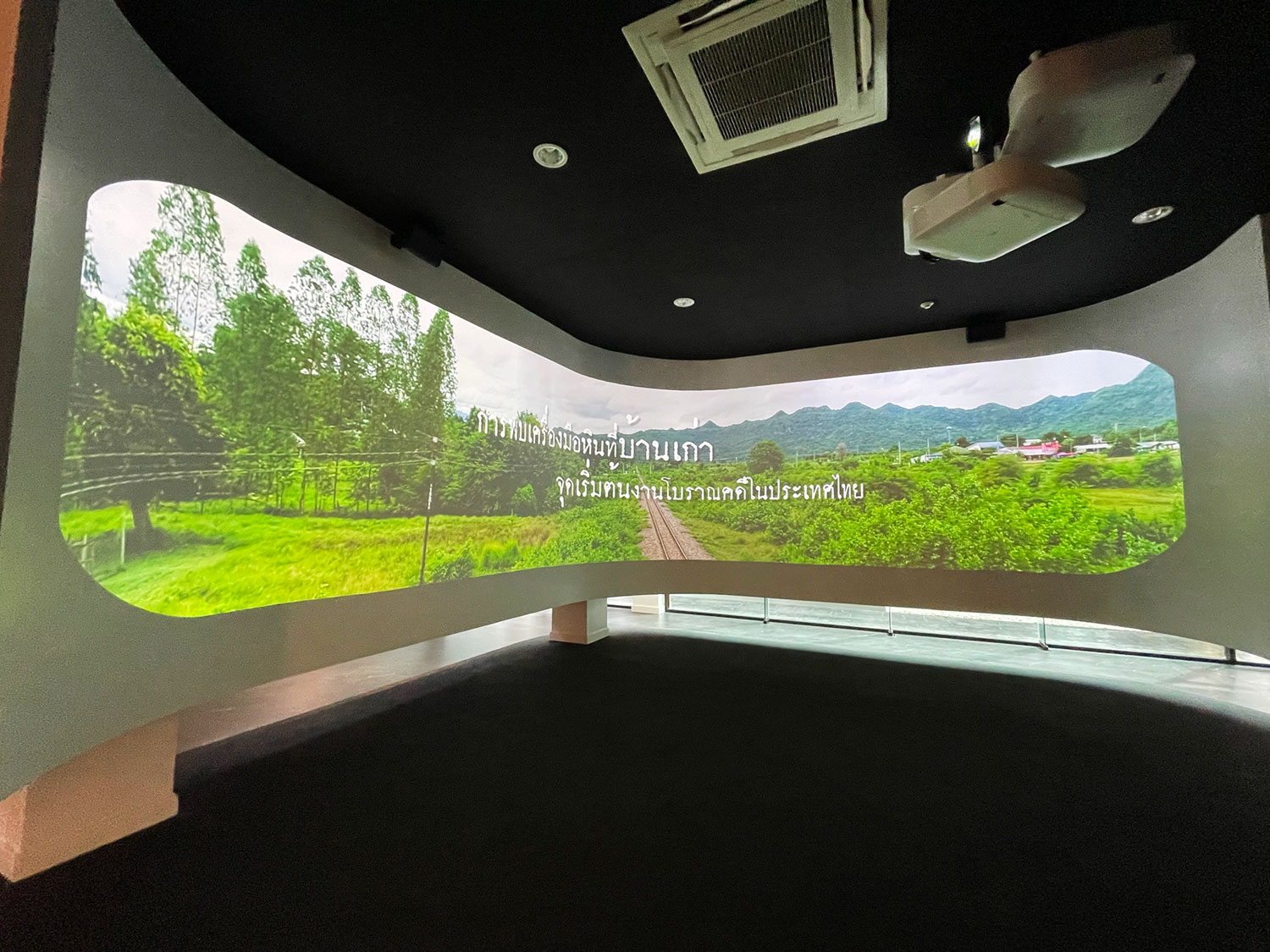 A 17-minute documentary on the Thai-Danish Prehistoric Expedition project is being screened in a mini-theatre.

"They utilised animal fangs and clam shells to craft jewellery. This points out that they might communicate and exchange things with people living in faraway areas. Cockles became valuable and ivories were used to make earrings, bracelets, necklaces and pendants."

On the other side, the skeleton of a 166cm-tall man aged 22 to 25 has a rounded head and a medium broad face. His teeth are somewhat inward, exhibiting moderate erosion as his shovel-shaped incisors, which are a genetic characteristic of Mongol people, have been removed. Teeth extraction might have been done in accordance with a custom or belief about the deceased's gender.

An interactive computer game allows visitors to figure out who owns the skeleton and to use their imagination to recreate an ancient man's face and diagnose disease from riddled bones, which is caused by thalassemia.

The ancient Ban Kao civilisation is known for its three-legged clay pots, burial jars and other potteries in various designs that were used in everyday life and burial rituals. Its methods were adopted by people throughout Suphan Buri and Tha Chin river basins. All potteries would be shattered to cover the grave's foundation and the bodies of infants would be entombed in a big clay jar.

The 3rd floor is devoted to the Ban Kao civilisation and the western region in the Iron Age. People expanded their communities to the lower plains along the banks of Mae Klong, Khwae Noi, Mae Klong and Tha Wa rivers, while the marine trade network extended to link India and China.

They learned how to create agricultural tools and ornaments by melting bronze. On display is a bronze axe with a hollow handle and blade to contain rice grains, nephrite earrings, a stone bangle with repairing bronze string and bronze drums, all dated from 1,500 to 3,100 years ago.

"When the maritime commerce network expanded, Indian sea merchants were able to bring novel products such as bronze drums, carnelian necklaces and bracelets to Ban Kao. Until the Dvaravati kingdom was established, people had adopted Indian culture," Prachya said.

The next room looks like an ancient cemetery, with a series of log coffins housing the corpes of important people before being buried in caves, which were considered holy land. They were unearthed in various locations including Tham Ong Ba, Tham Sing, Tham Ab Ya, Khao Tham Thalu and Tham Ruesee.

The last corner illustrates how the Hindu influence expanded to Siam through a display of a Khmer-style sandstone statue of Prajnaparamita, a terracotta Khmer-style roofing tile set and sandstone pedestals for containing precious things from the 13th century.

Returning to the ground, visitors can end the tour at an archaeological pit in Wat Tha Po School, just a short walk from the museum. It's home to 10 graves of children, ranging in age from newborns to nine years old. Many earthen pots were buried in the graveyard for the dead, with each body lying straight on its back with its head pointing northeast.

Ban Kao National Museum is in Muang Kanchanaburi district, Kanchanaburi. It's open Wednesday to Sunday from 9am to 4pm. Tickets are priced at 10 baht for Thais and 50 baht for foreigners.