The Klong Luang contest returns to Lamphun after two years

Despite the hot weather in the ancient town of Lamphun, a large crowd of Buddhist votaries gathered at the foot of Tha Nang Bridge to welcome the annual Klong Luang (Lanna-style big drum) contest back after a two-year hiatus as part of the seven-day Phra That Hariphunchai Bathing Festival to mark Visakha Bucha Day. 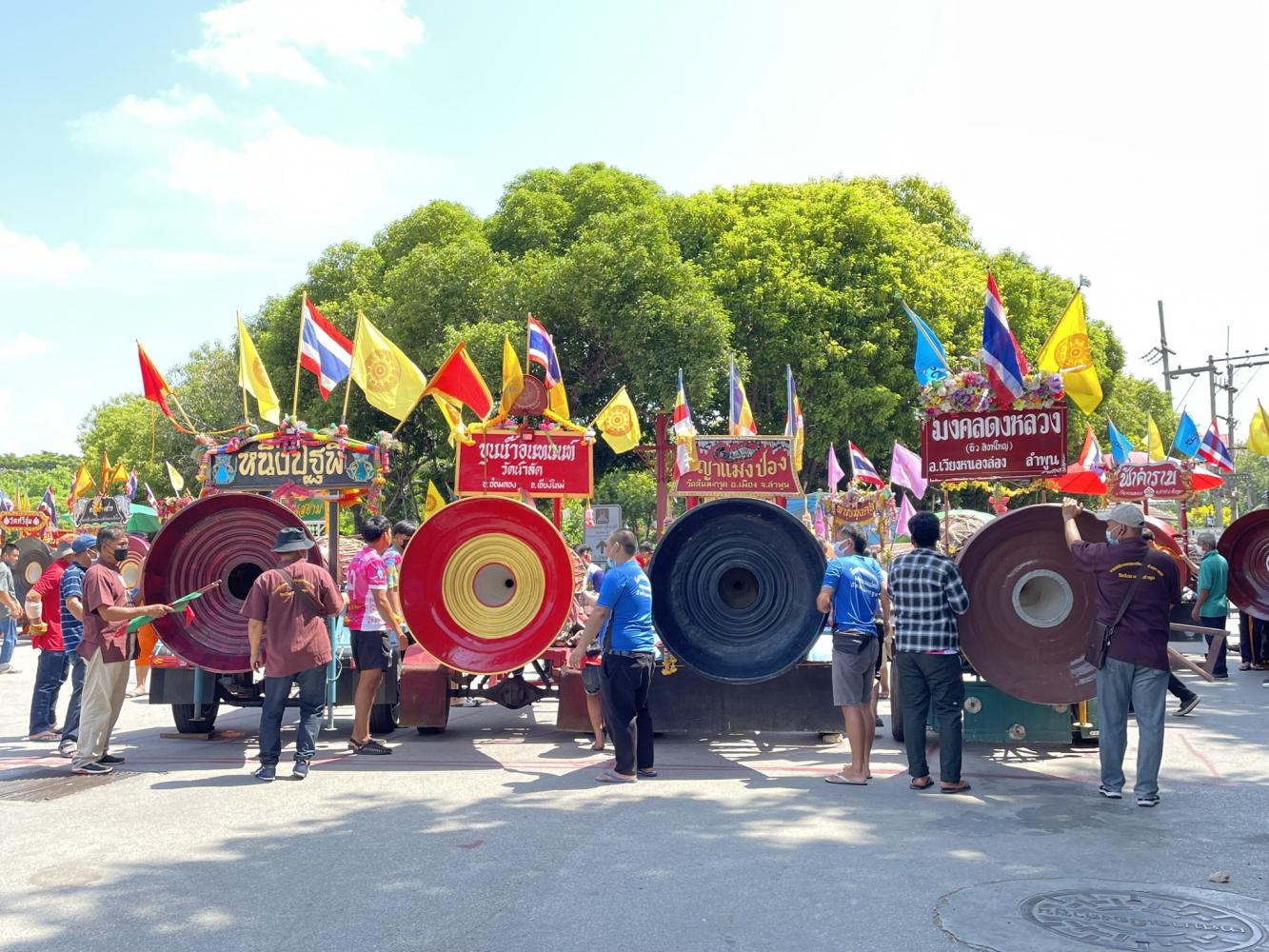 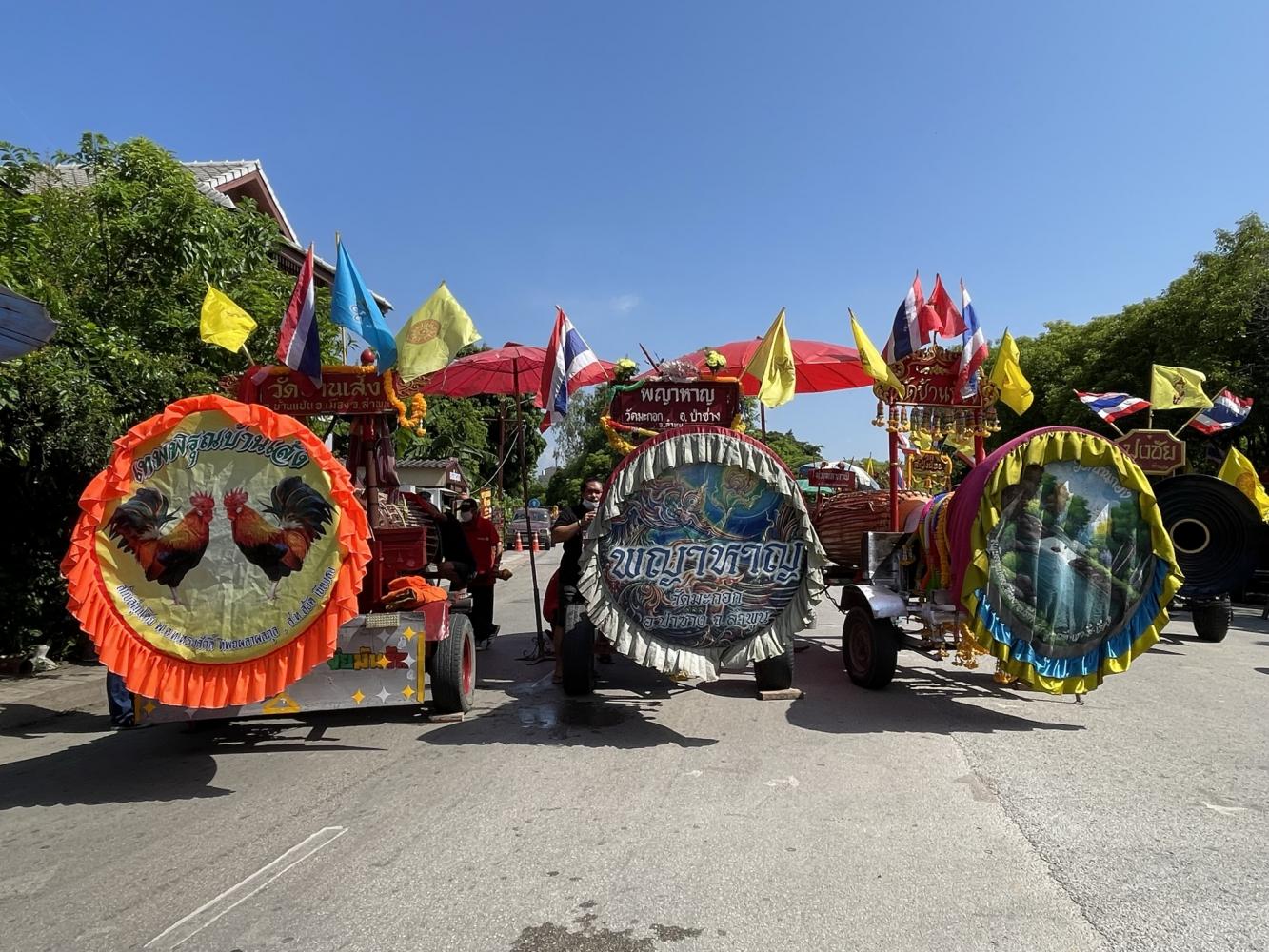 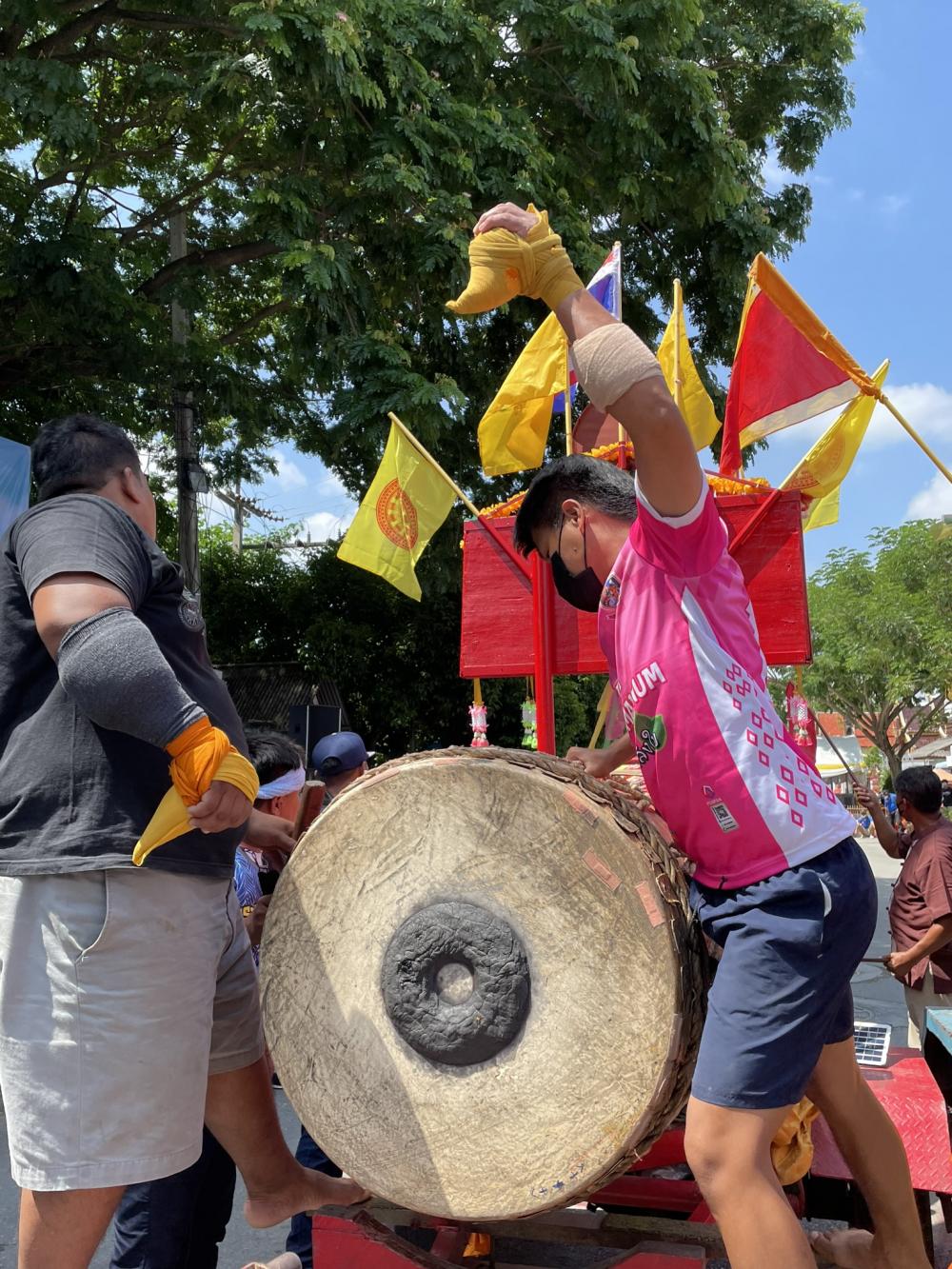 Set against a backdrop of azure skies and classic Lanna-style setting, a colourful parade of wooden carts have been modified to accommodate giant drums and young drummers from several temples both in Lamphun and adjacent cities Chiang Mai and Lampang. This year, the number of contenders has decreased from 100 to 30 due to the uncertain circumstances of the Covid-19 pandemic.

It was a familiar scenario when Rop Muang Nai Road, which runs along the banks of Kuang River, transformed into an open stage and passersby grabbed ringside seats to watch a practice and guess who would win. This, however, seems like a preview of what is to come in the months ahead when our lives return to normal.

For centuries, the big drum has been used in various Lanna-style religious rites, which prompted the Lamphun Provincial Cultural Office to host the first drumming tournament in 2003 in the hopes of preserving the rich ethnic legacy for future generations. All of these aged-old drums were fashioned out of local hardwood, but young villagers learned to apply modern invention to refine their designs for a louder and longer-lasting echo.

"Tai Yong people have employed klong luang in Northern-style religious rituals such as washing Buddha's relics and commemorating the building of a new ubosot or monastery between March to June. Klong luang seems like a heart in a community because people of all ages gather and spend time together," said Pongtep Manattrong, director of the Lamphun Provincial Cultural Office.

"Klong luang looks like a larger version of a Thai-style tall narrow drum. Each drum is crafted from a single tree and its quality and designs are now improved using scientific knowledge. Each round will include four teams, each striking a drum at the same time, with a council of talented musicians determining whose drum can produce the loudest sound."

The batter head is fashioned out of cow leather and the bottom drum is shaped like a large loudspeaker to transfer the sound more effectively. There's no need for sticks since drummers wrap their hands with cloth instead. To produce reverberation, a mixture of sticky rice, ashes and rice hulls is placed on a leather batter head, using skills passed down from generation to generation.

"Like the famed boat races in Phichit province, the klong luang competition was a customary method for Tai Yong communities to celebrate. A kind of wood and a layer of sticky rice, ashes and rice husk are essential for generating resonance. Drummers don't hit a batter head but instead, they aim for the coating on its surface," said Anusorn Wongwan, chief executive of the Lamphun Provincial Administrative Organization.

While a troop of drummers rose in ranks, worshippers prayed for fortune and prosperity at Wat Phrathat Hariphunchai. According to legend, Buddha's relics were discovered beneath the ground of King Arthitayarat's royal palace and he donated this site to build a pagoda in 897, making it one of the eight oldest pagodas in the Lanna region. 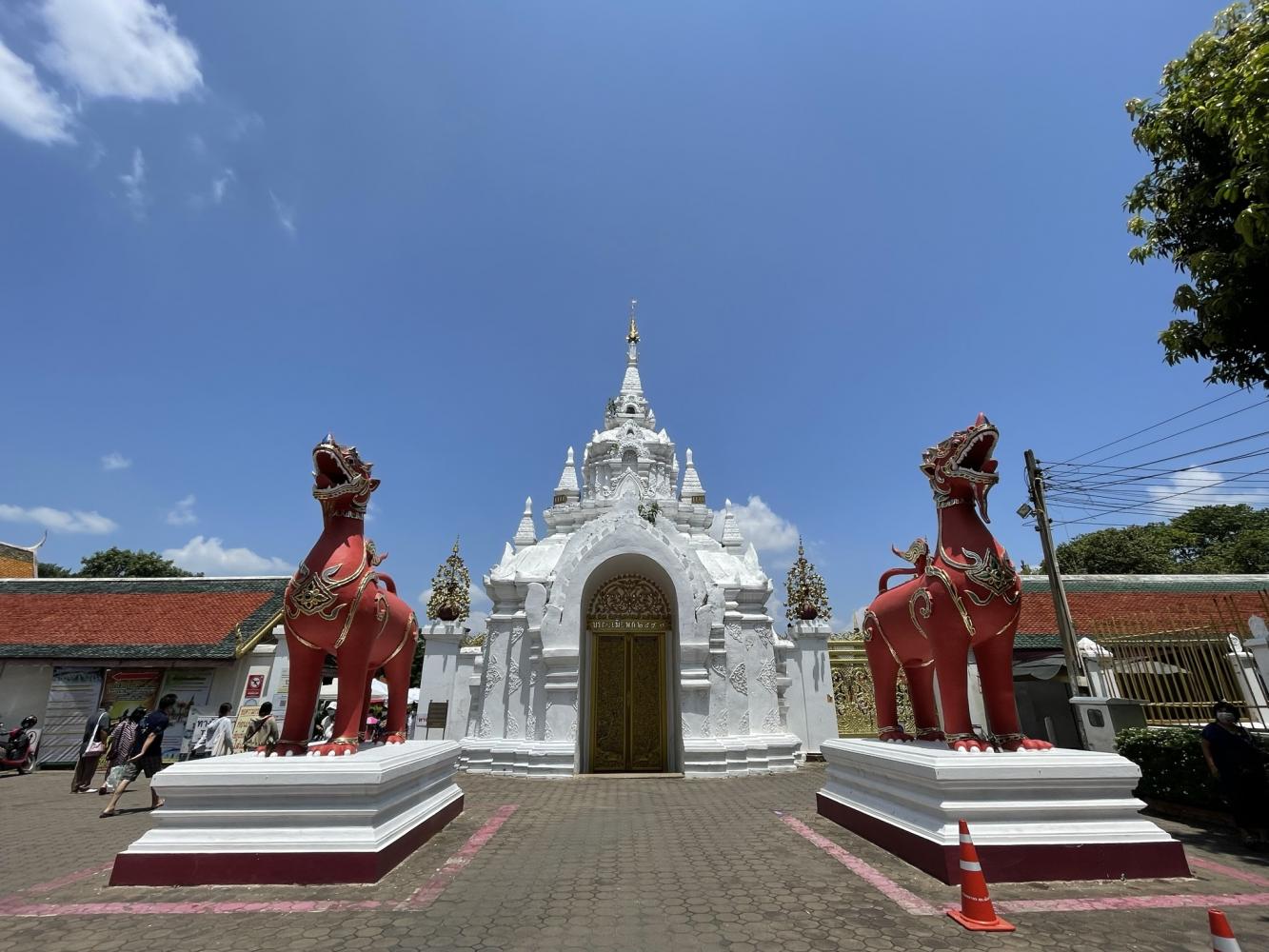 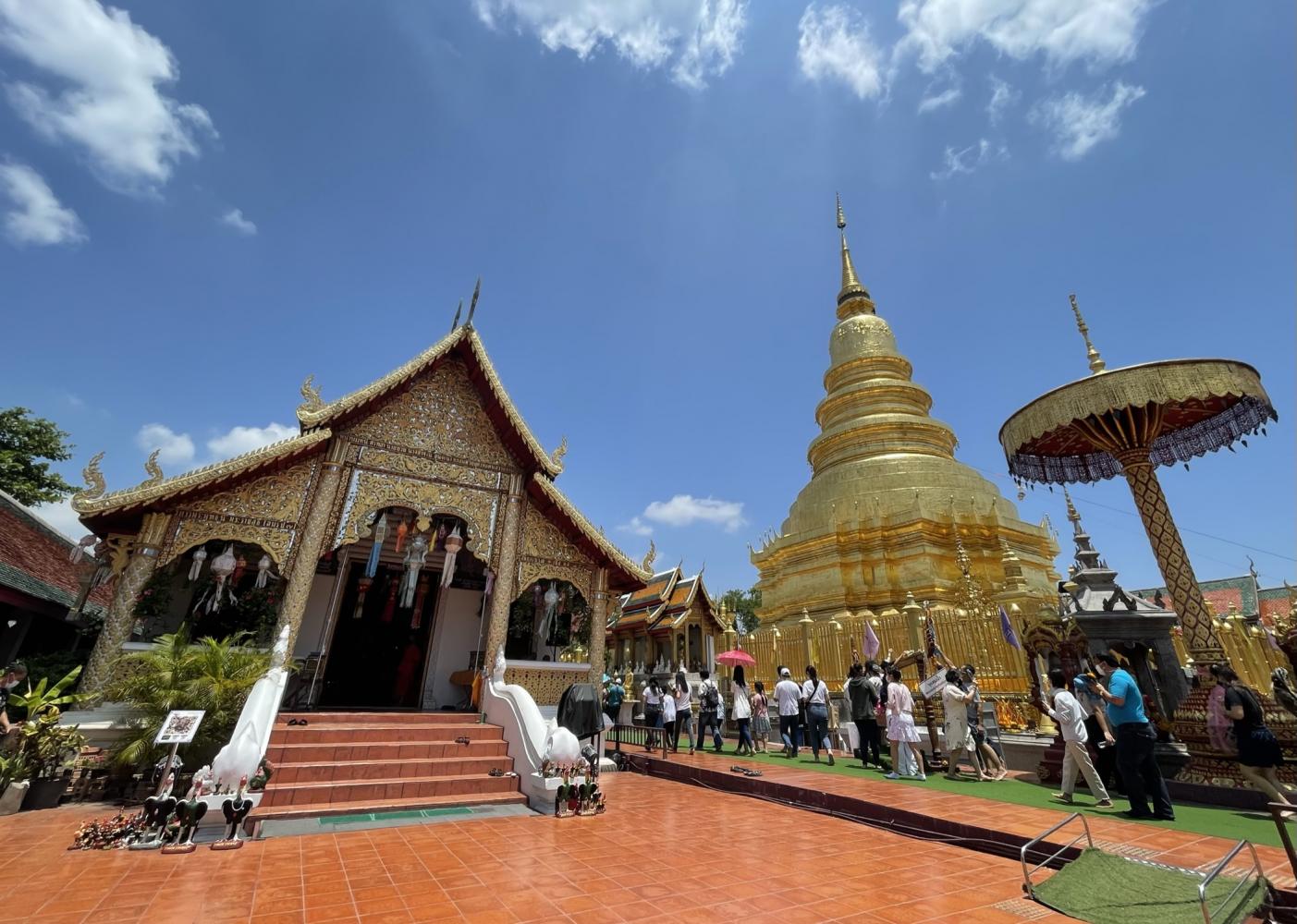 Later, in 1443 King Tilokarat of Chiang Mai renovated it in the Ceylonese style and the town has maintained its tradition by conducting the Phra That Hariphunchai Bathing Festival to pay homage to Lord Buddha on the full moon day of the sixth lunar month.

On the other side, Kruba Srivichai reconstructed Wihan Laung to replace the original, which was damaged by a storm in 1915. Unlike other Lanna-style viharas, it is encircled by a cloister and houses a statue of Phra Maha Muni Sri Hariphunchai, which is a hybrid of Lanna and Sukhothai-style arts.

A tram bell rang to indicate that it was time to board and the next stop was the historical landmark of Ku Chang-Ku Ma historical site, which is situated 2km from downtown in the Wat Kai Kaoe community. Some 1,400-years ago, Phra Nang Chamdevi, the first king of Hariphunchai, created the war elephant graveyard to bury the remains of her black elephant, Phu Kham Kiew.

According to folklore, it was a formidable black elephant with green tusks capable of wreaking havoc wherever it pointed. A large bell-shaped brick stupa was erected to cover its body and allow it to protect the kingdom. Ku Ma and Ku Kai, stupas that contain the bones of a warhorse and a white rooster, are also located inside the historical site.

Just a 30-minute drive from a boneyard, the hamlet of Ban Nong Nguek is a pleasant stopover in the Pa Sang district for those interested in crafts. Back in 1999, skilled housewives formed the Ban Nong Nguek Handwoven Cotton Club to create a collection of unique handcrafted products made from handwoven cotton to generate income after the harvest season. 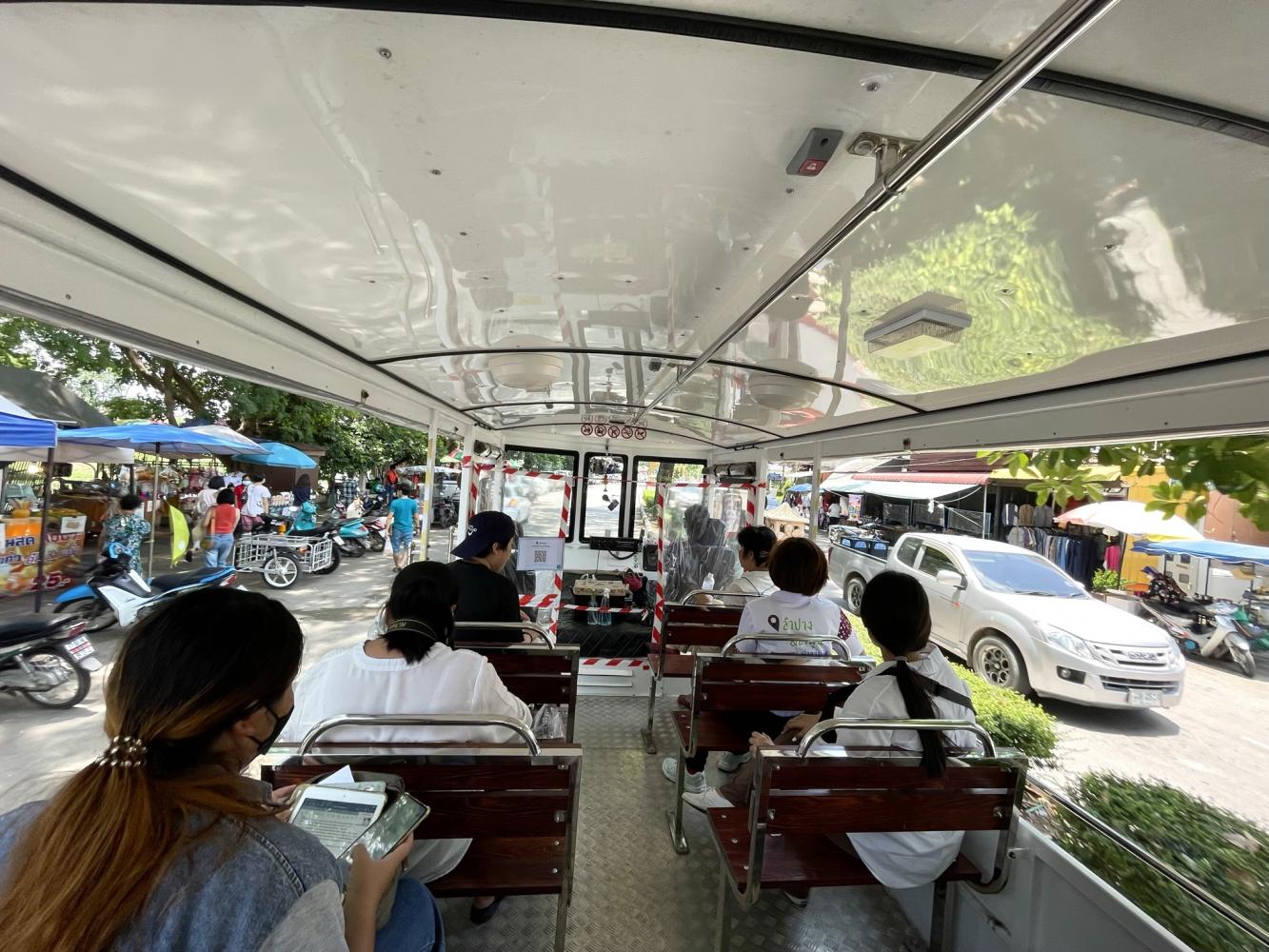 Visitors can enjoy a tram tour to explore many attractions like the 1,400-year-old Ku Chang-Ku Ma historical site. 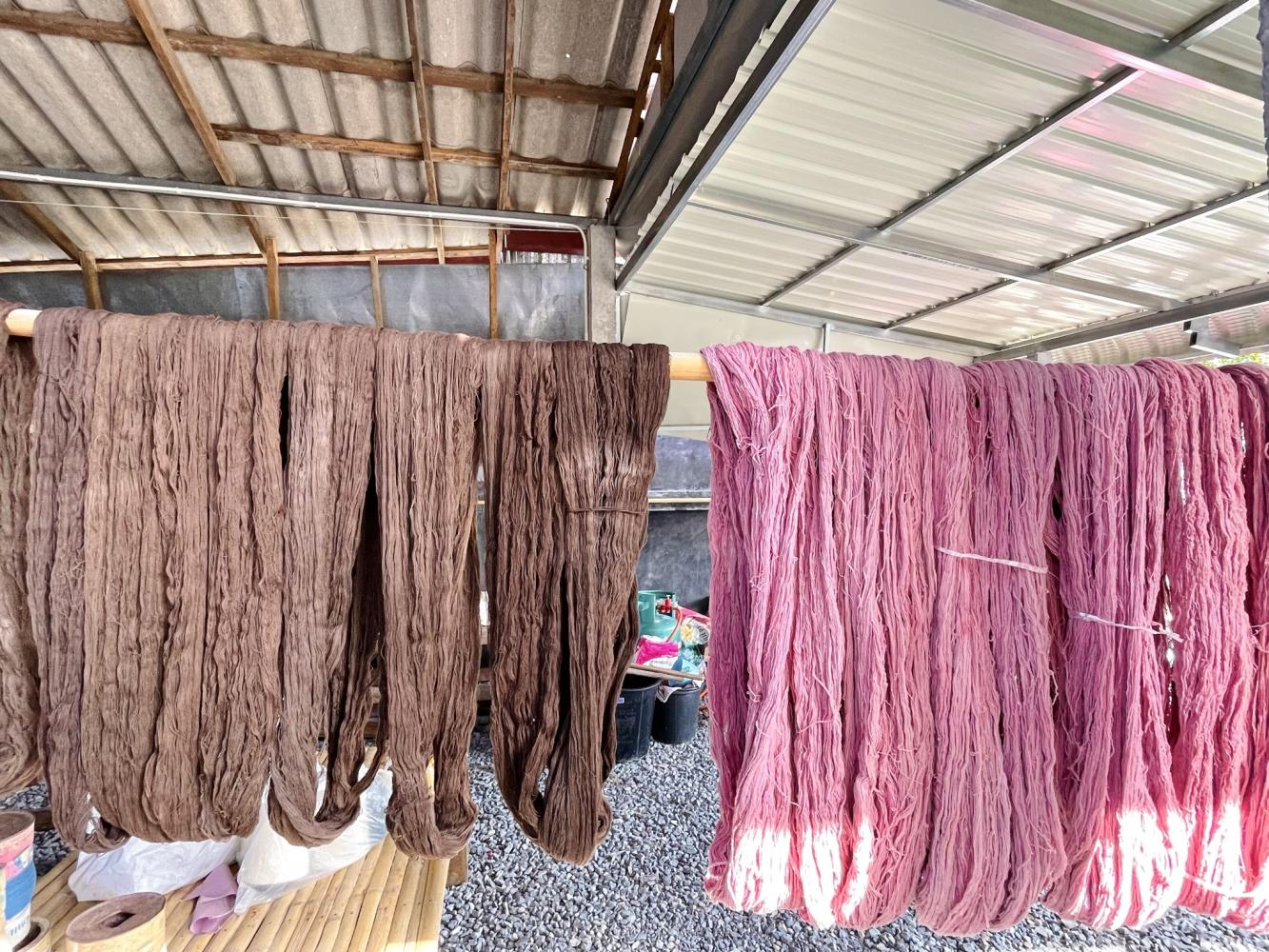 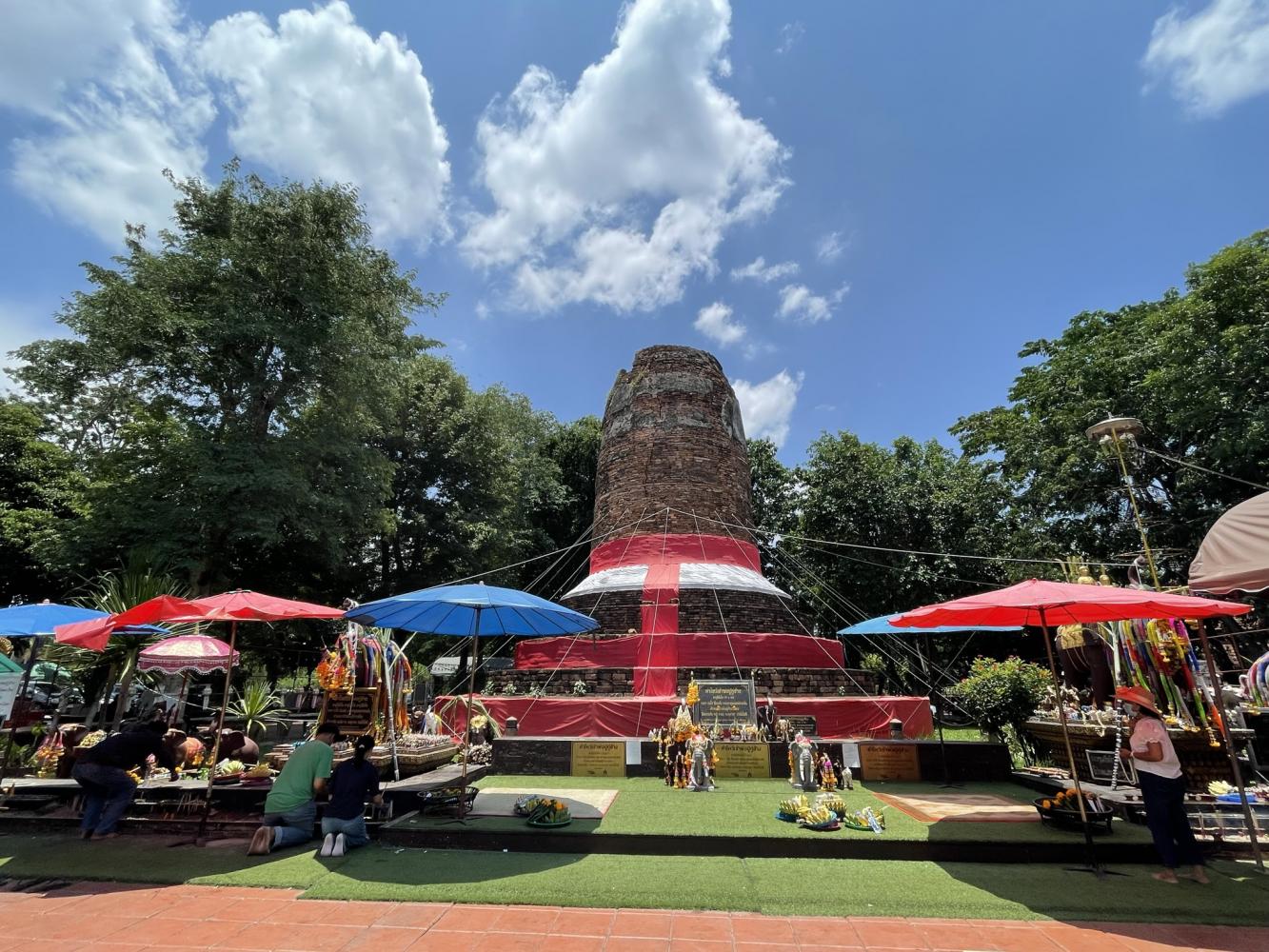 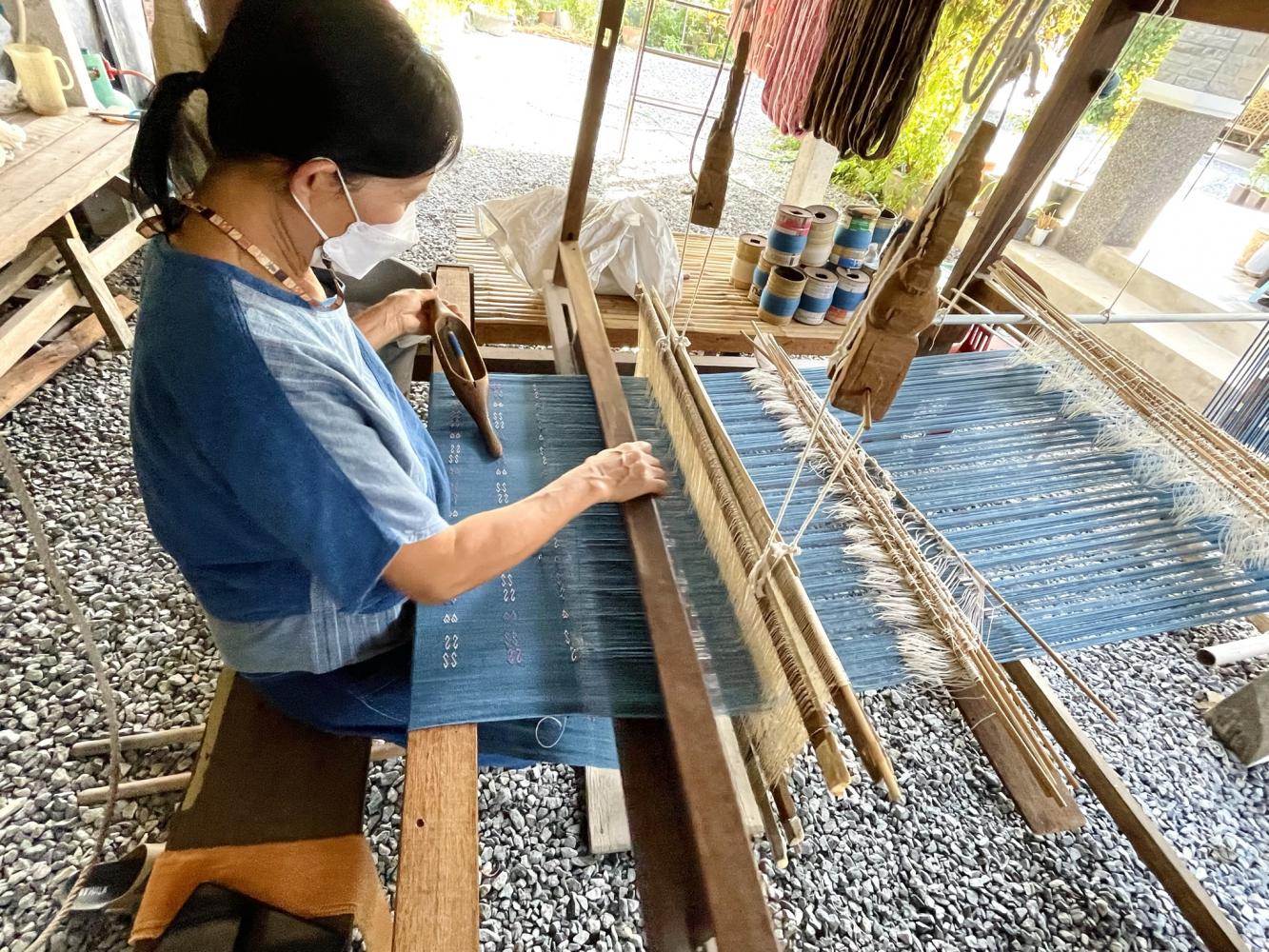 The Ban Nong Nguek village is famous for its unique handwoven cotton textiles. 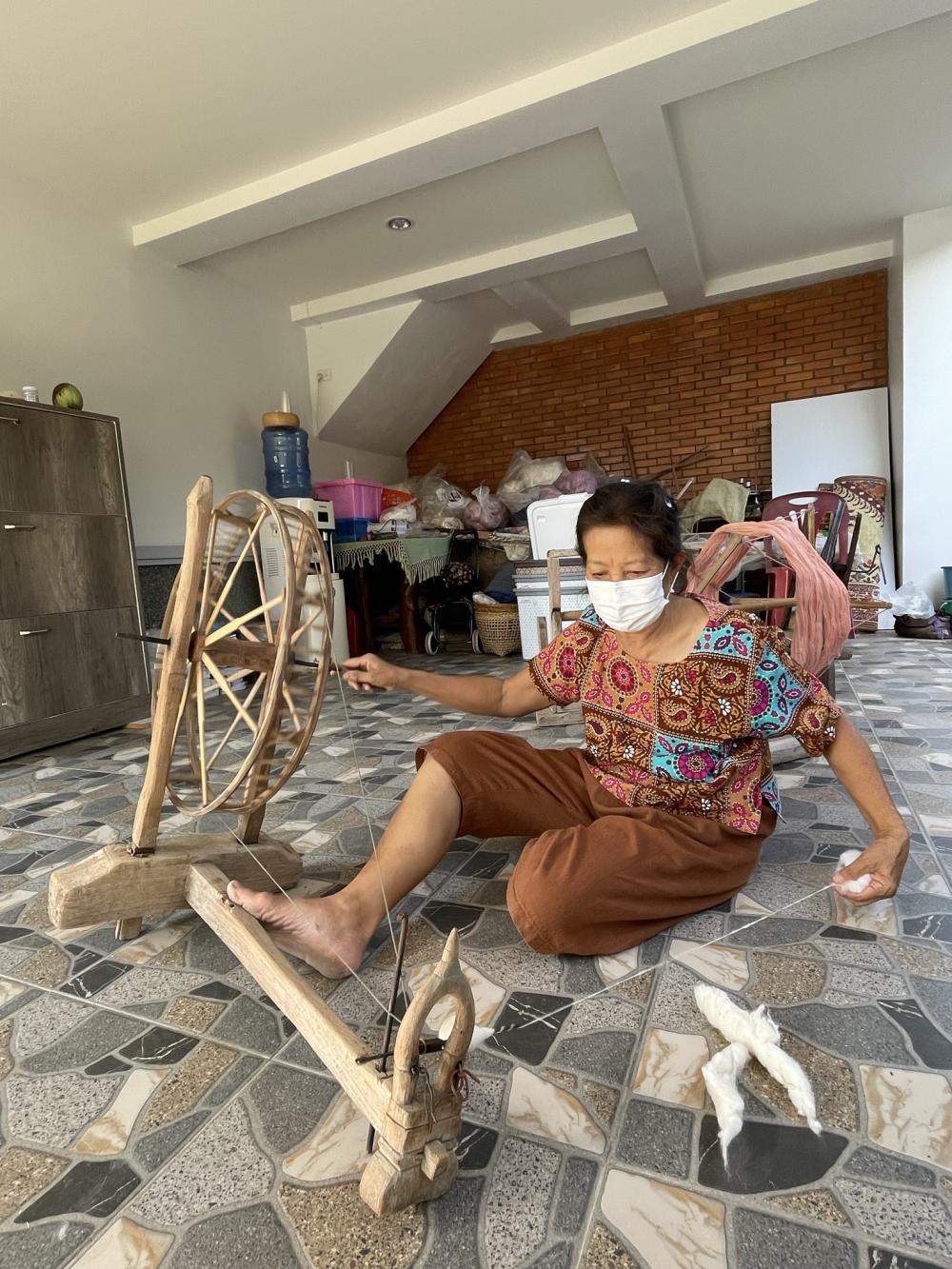 A group leader Chuenchom Sukrongchang has turned her home into a learning centre where visitors can come to learn how to dye fabric from natural colours, spin cotton thread and weave textiles using traditional methods. Cotton weaving was once done only for the family's use.

"We plant cotton trees, which take two or three years to mature before we can harvest their seeds for the fibres. We utilise them to make our own apparel and the remainder will be sold. Our designs are inspired by local plants and surroundings such as bua khrue, khor (hook), kret tao (turtle scales), and yok dok (brocade on its fabric decorated with additional gold and silver wefts)," Chuenchom said.

"We extract pastel-shaded colours from local plants and flowers, including Indian almond for green, buttercup for old rose, lac for pink-purple, indigo, and ebony for dark brown. I can weave 10 different fabrics every month for clothing, tablecloths, purses, shoes, and home decor. Prices vary according to size and design."

Next door, veteran artisan Pairat Nanpanak grew up in a farming family, but he went into the footwear industry. When consumers needed something more durable than easily rope yarn, he saw the potential for a slipper business.

"I set up a small workshop in my house to make my own shoes out of discarded tyres and I discovered that they were useful and long-lasting for farmers. All used tyres are cleaned and moulded into soles before being hammered together with only knots and staples," Pairat said.

We headed to Li district before sunset, arriving just in time to participate in a candlelight procession, in which young and old villagers gather to pray and march three times around Wat Maha Chedi Sri Wiang Chai. We stood out among a crowd dressed in traditional Pga K'nyau-style costumes, performing religious rites on every Buddhist holy day in order to preserve a way of local life and their rich cultural legacy. 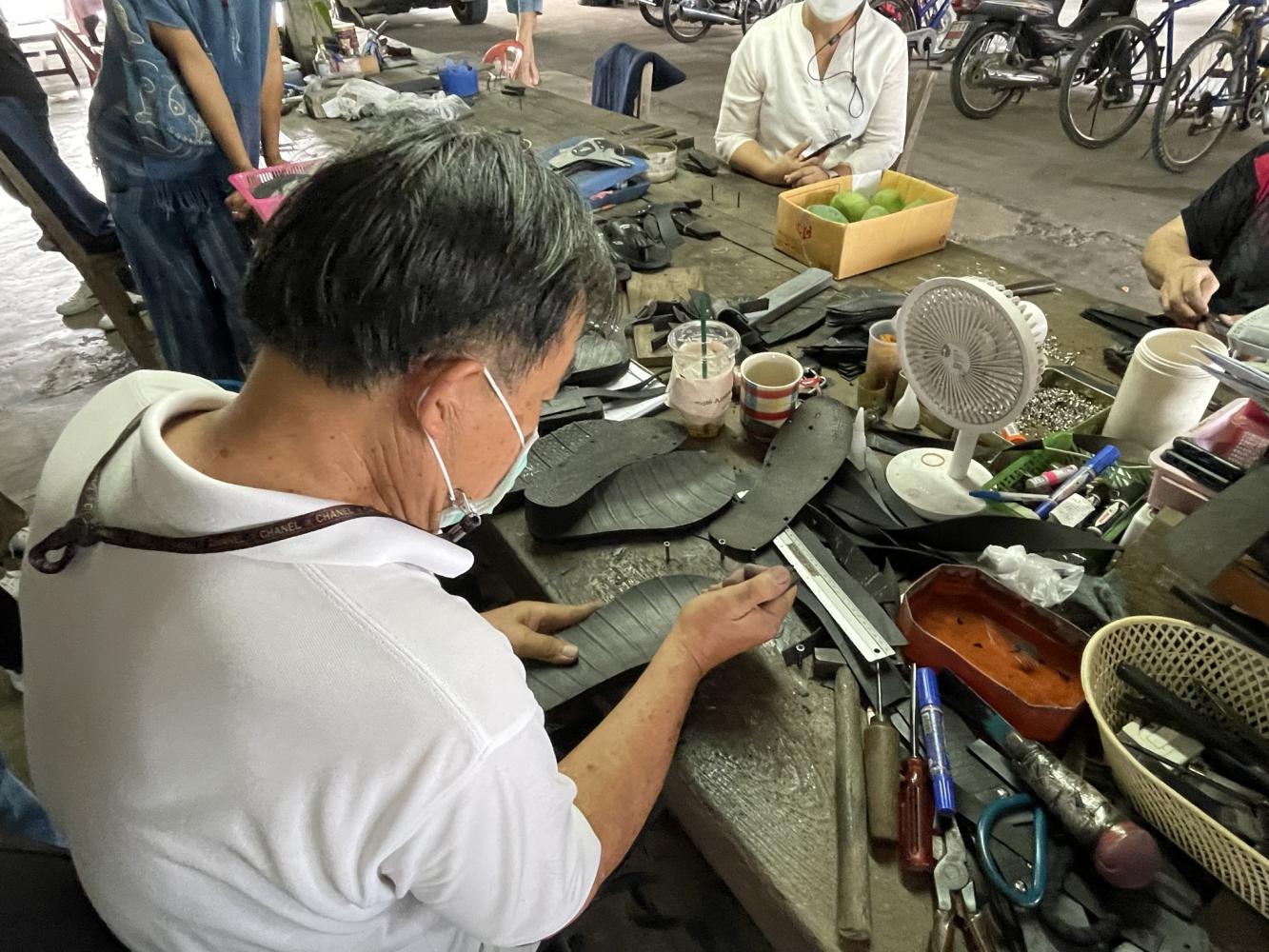 Pairat Nanpanak has transformed his house into a slipper factory. 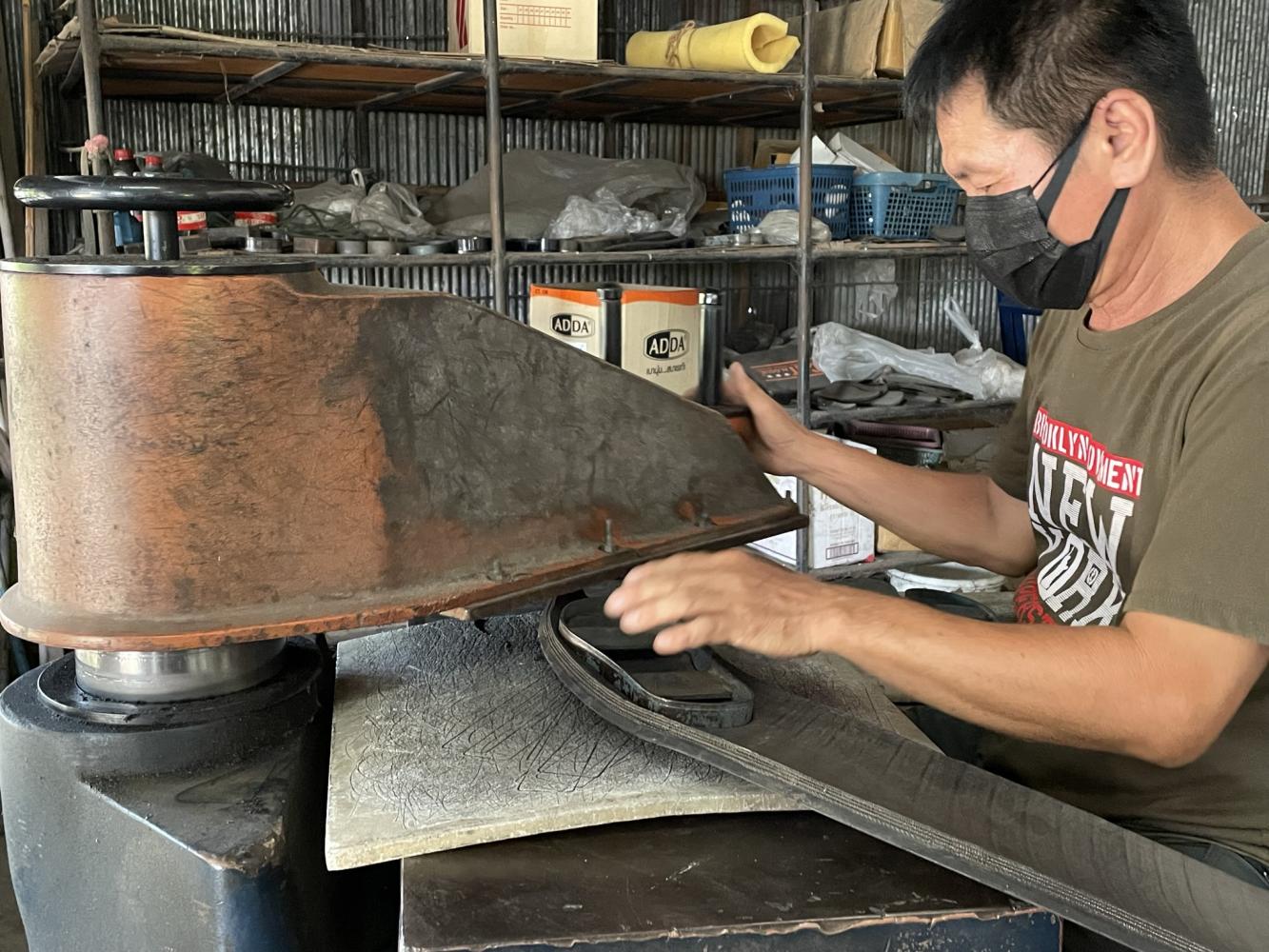 Back in 1953, Kruba Chaiya Wongsa arrived at this location and discovered Lord Buddha's faeces from the time he was born as a Bodhisattva cow, which became relics. Kruba Chaiya Wongsa and Pga K'nyau devotees spent 11 years erecting a Lanna-style pagoda as a dedication to five Buddhas. Inspired by Shwedagon Pagoda in Myanmar, it was built of laterite in the shape of a bell, ornamented with 84,000 Buddha statues and coated with brass and gold leaves.

A group of Karen villagers moved from Chiang Mai and Mae Hong Son to reside here and devote their lives to Lord Buddha as vegetarians. Thanks to the royal project, they learned to build a reservoir in the neighbourhood and enhance the soil for planting mango, Hong Kong kale, longan and corn to sell under the Doi Kham label. They specialise in silver jewellery and handwoven textiles and their town has become an eco-friendly tourist destination.

We got up early in the morning to participate in Wat Phra Bat Huay Tom's daily alms offering ceremony. At the temple's entrance, all pilgrims took their shoes off and went barefoot down a lengthy rocky pathway to a sermon hall. We poured sticky rice into a row of alms bowls and arranged a long table with trays of vegetarian food and drinks.

We then assembled on the ground to trim a procession of towering taiyatan trees with instant noodles, dry food, books, hats, brooms, and other daily objects, which would be paraded through the village and Maha Chedi Sri Wiang Chai in the afternoon to pay homage to Buddha's relics.

Walking further, the Lanna-style vihara boasts Buddha's footsteps and a Buddha statue created by Kruba Chaiya Wongsa. Its walls are covered with astonishing murals depicting the lives of Lord Buddha and Kruba Chaiya Wongsa as well as the Wat Phra Bat Huay Tom community's lifestyle. The remains of Kruba Chaiya Wongsa are still contained in a glass casket in an adjacent building.

Our trip came to a close at Wat Phra Phutthabat Pha Nam, which houses Kruba Apichai Khaopi's remains in a glass coffin. Visitors can ascend to the top of the cliff and pay homage to relics in gold and white pagodas as well as enjoy a panoramic view of Li's lush mountainous landscapes. 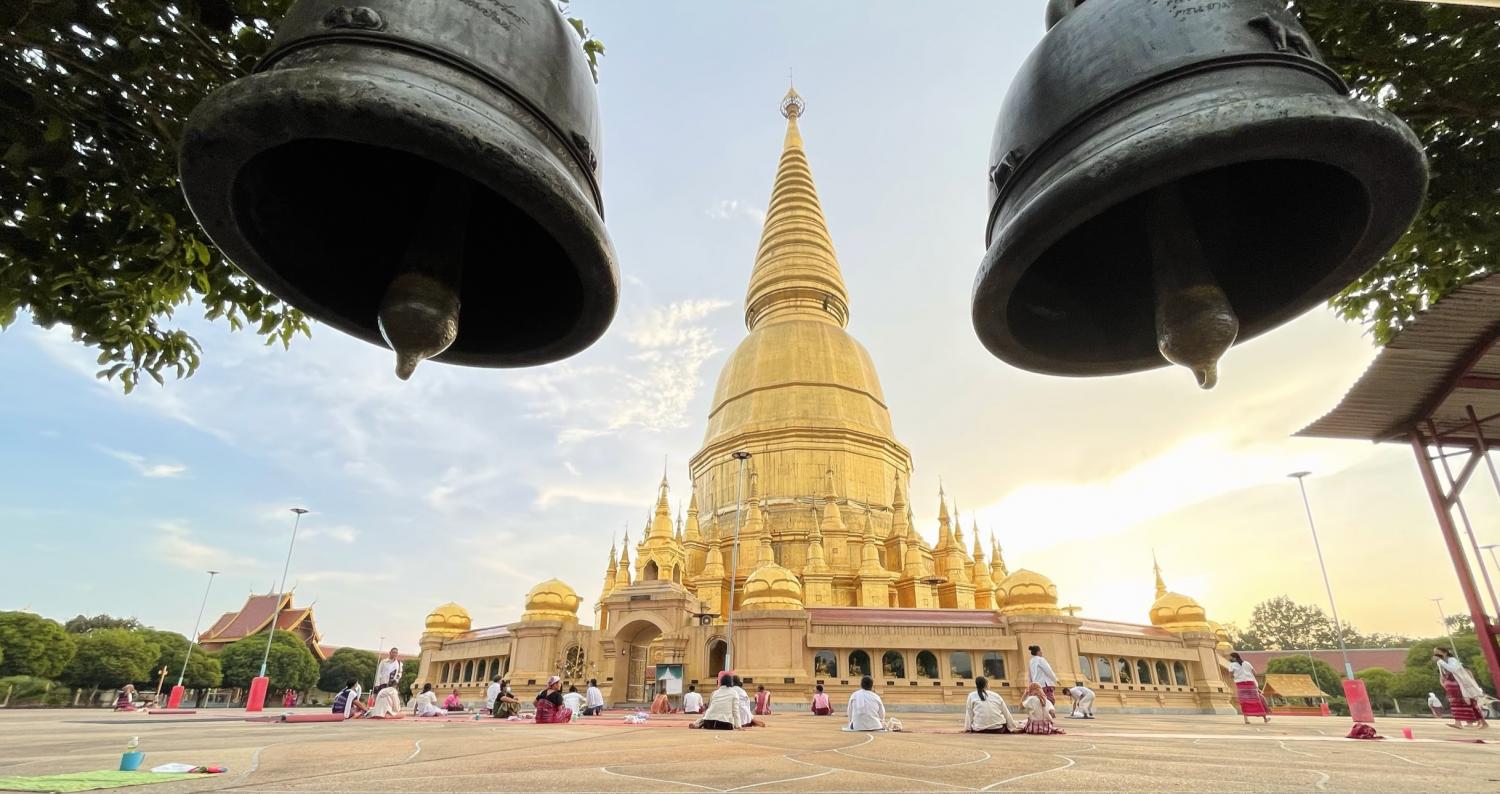 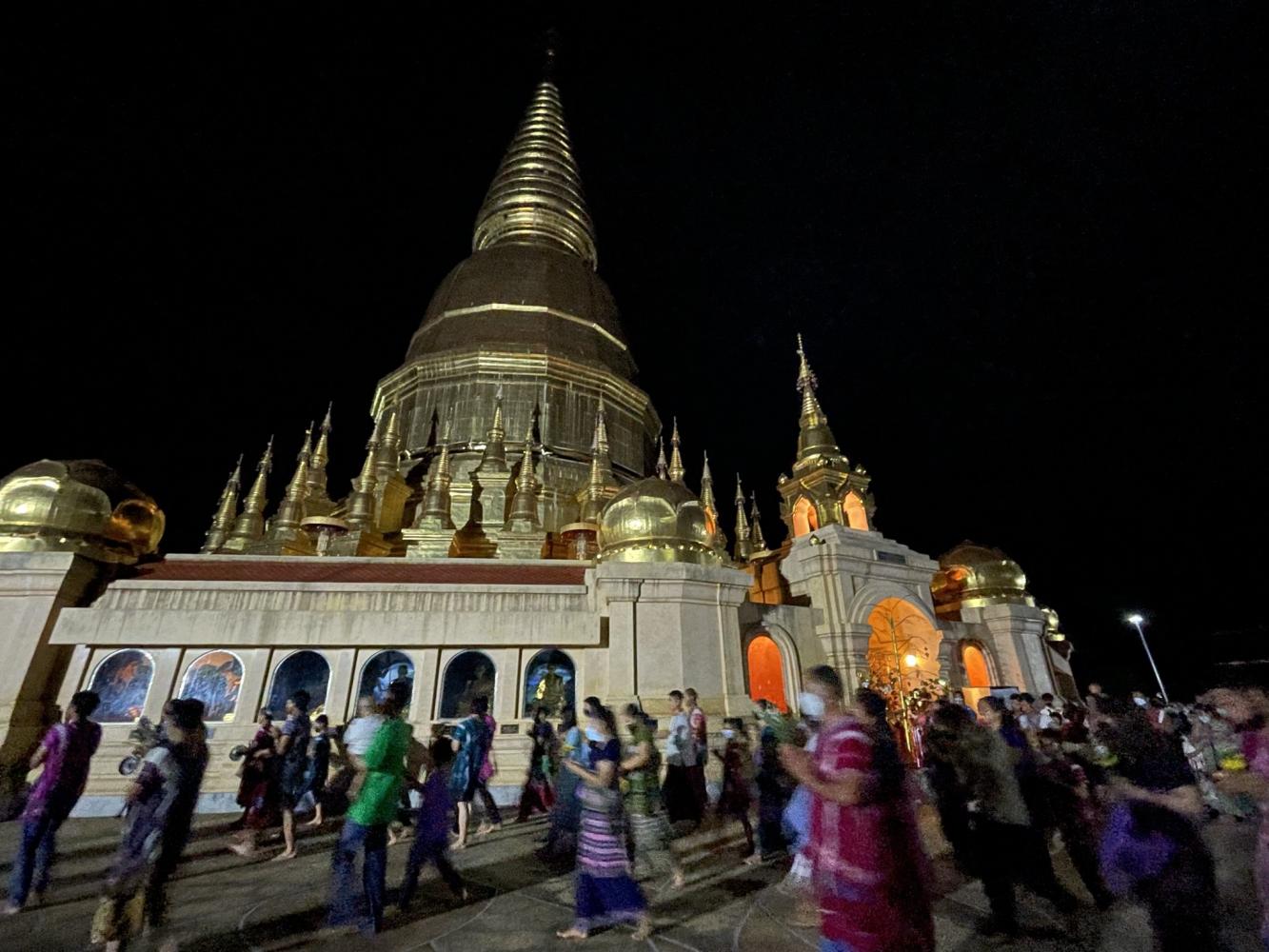 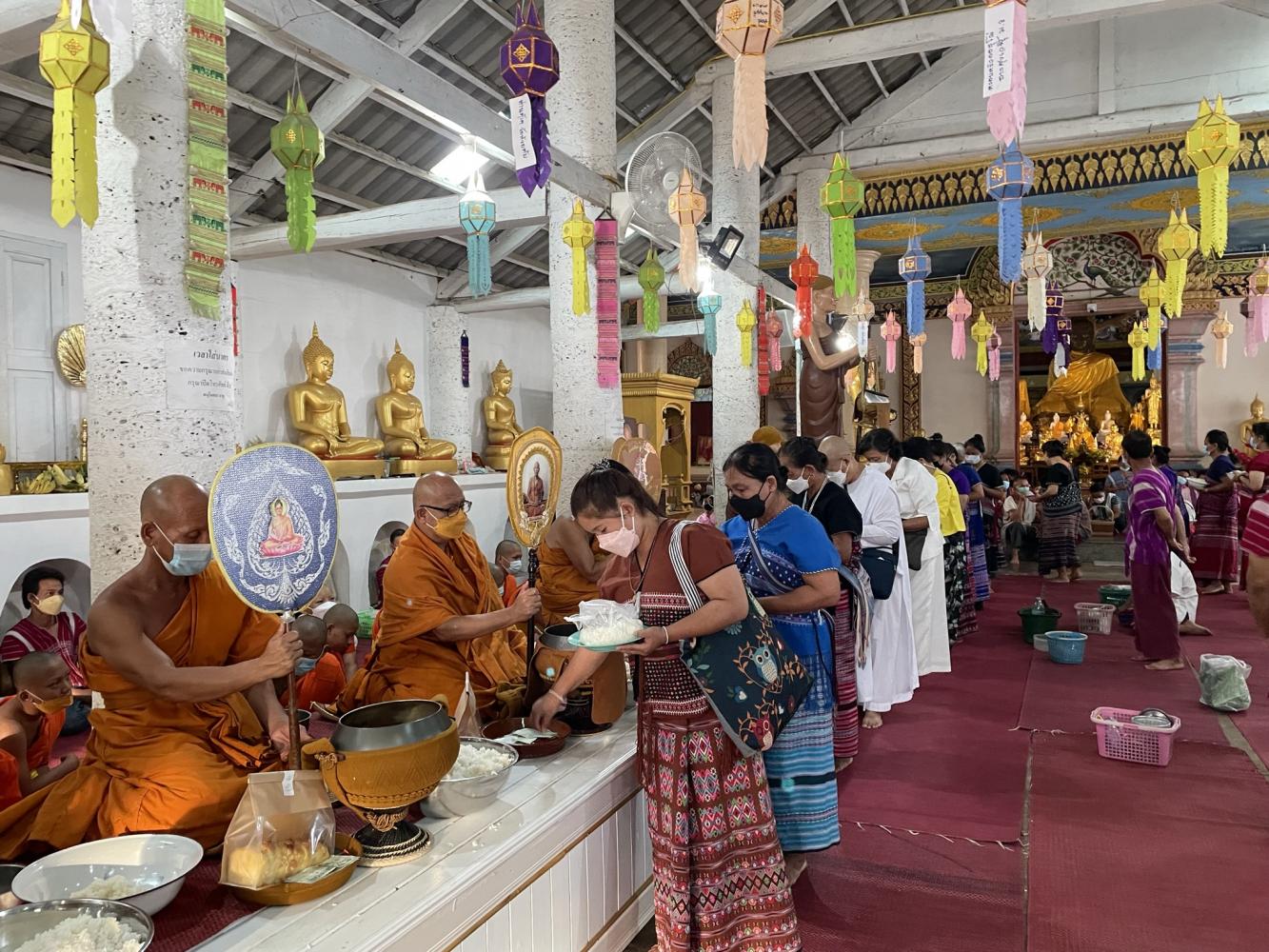 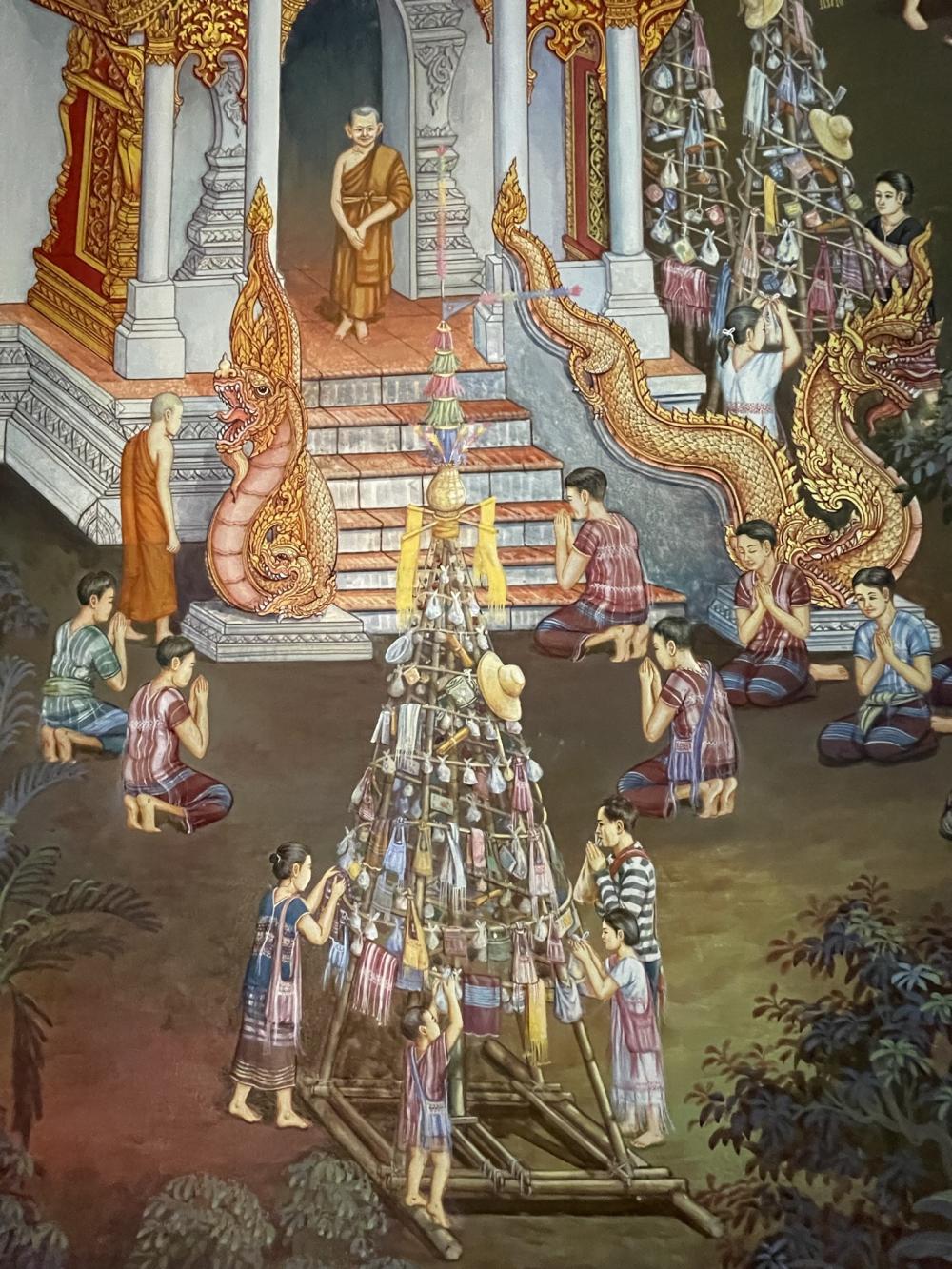 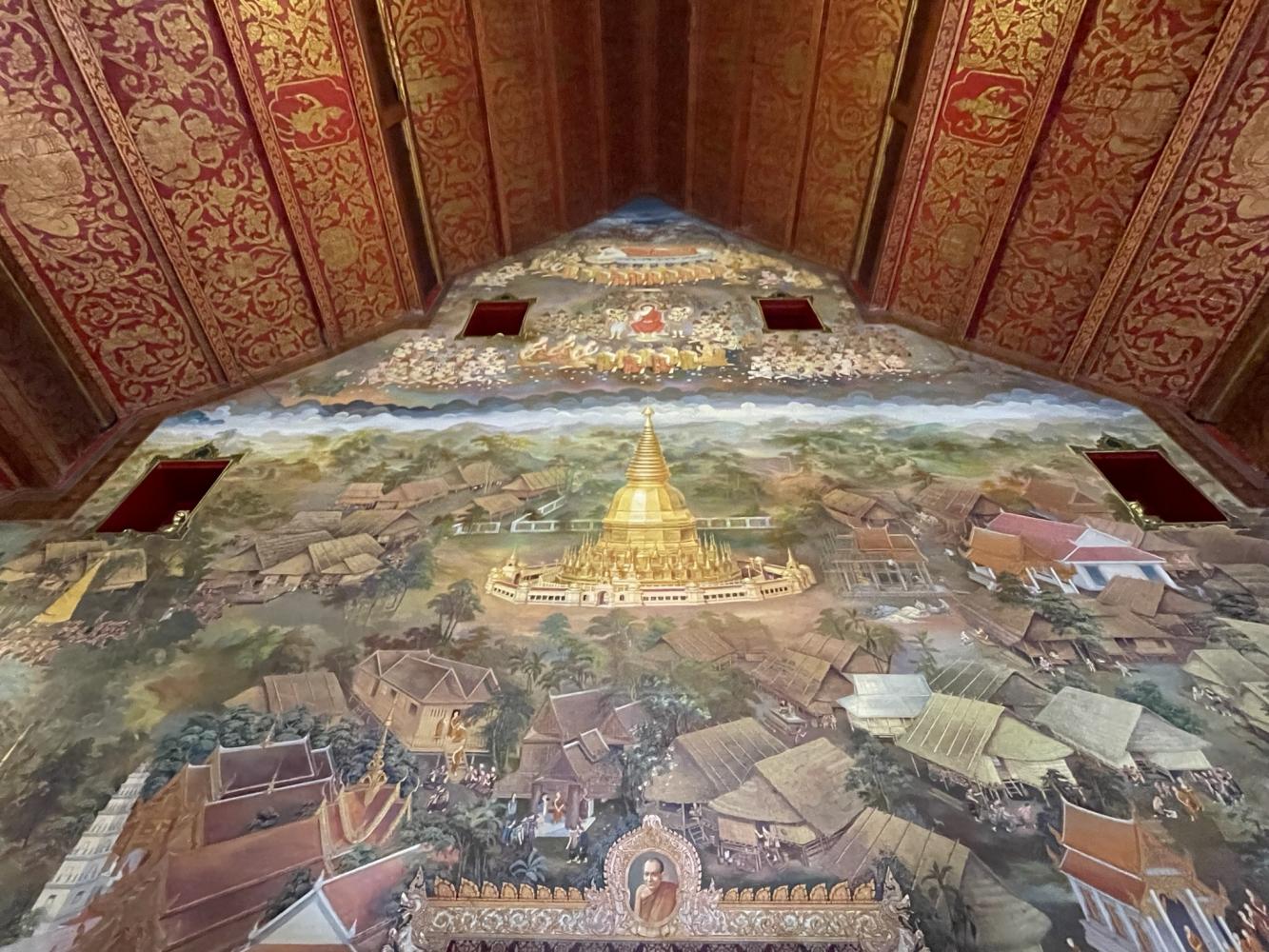 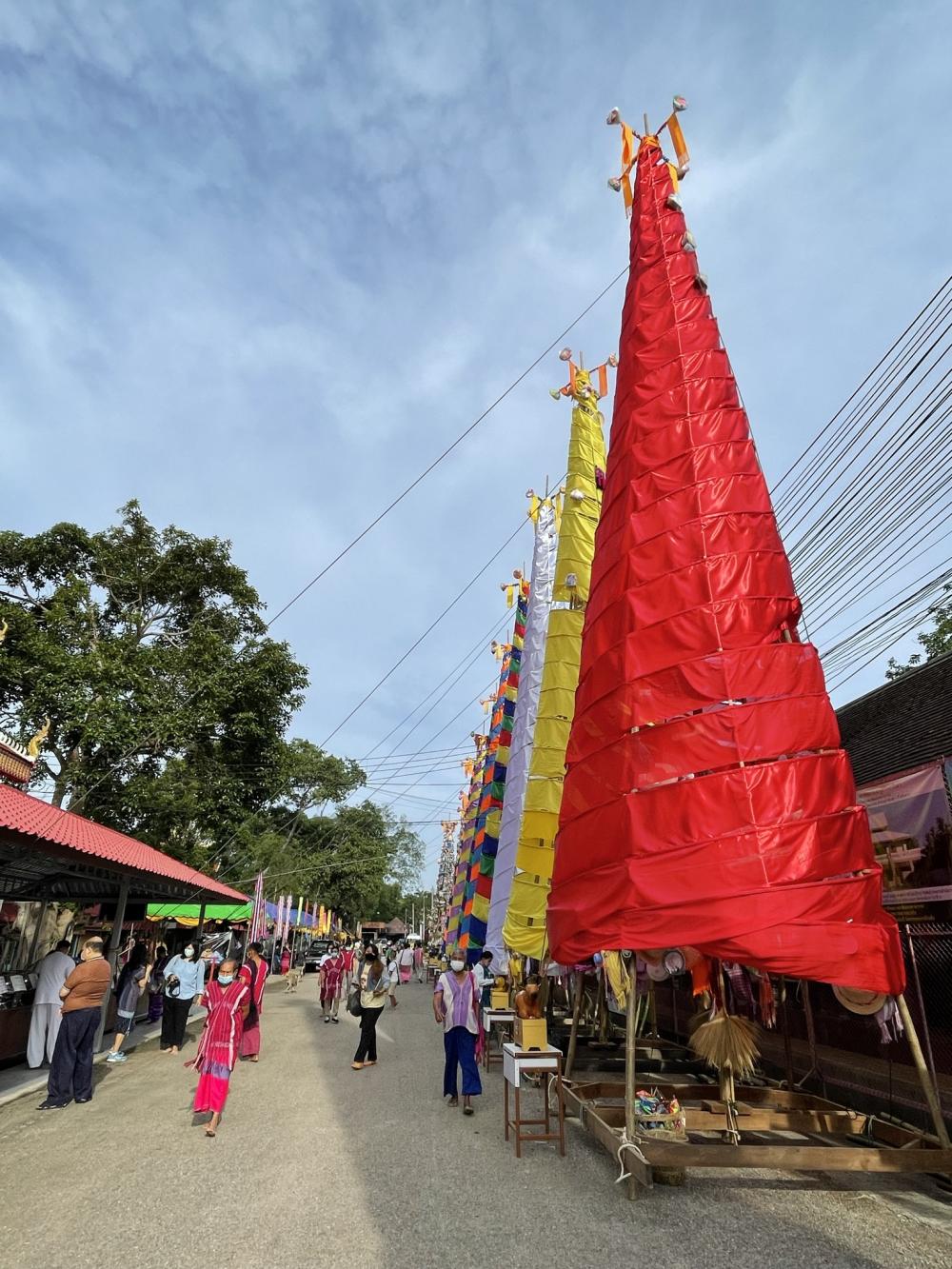 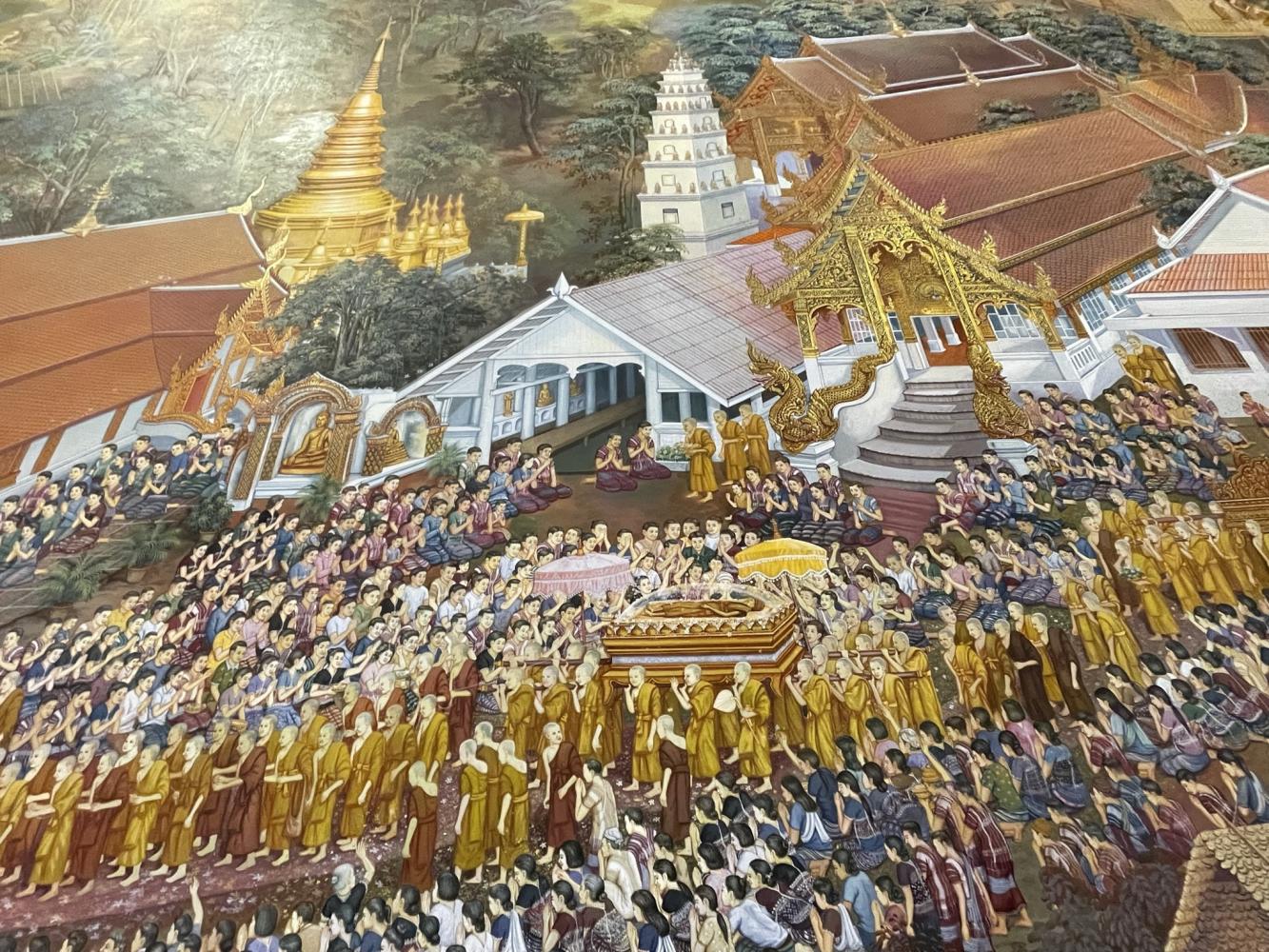 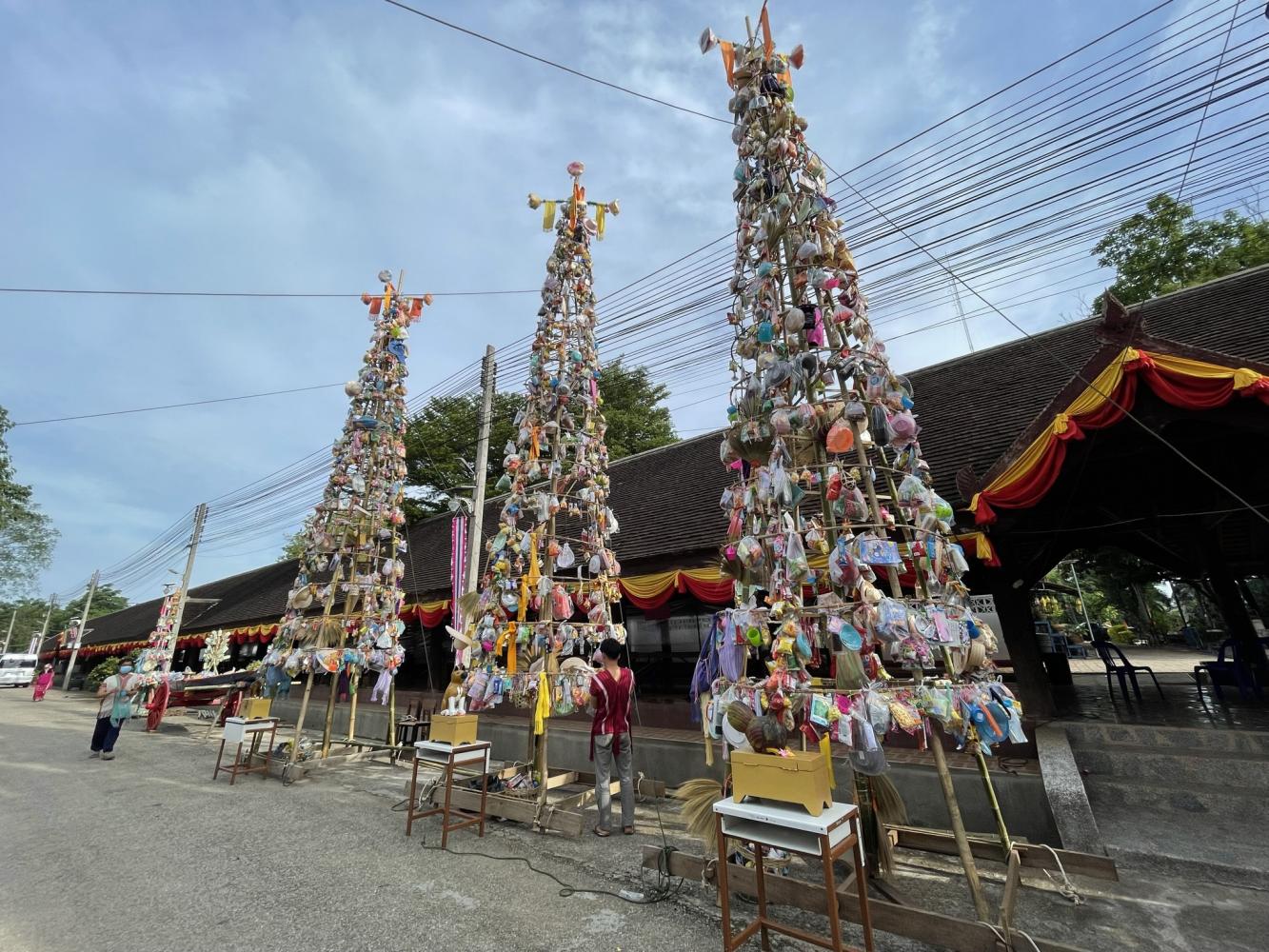 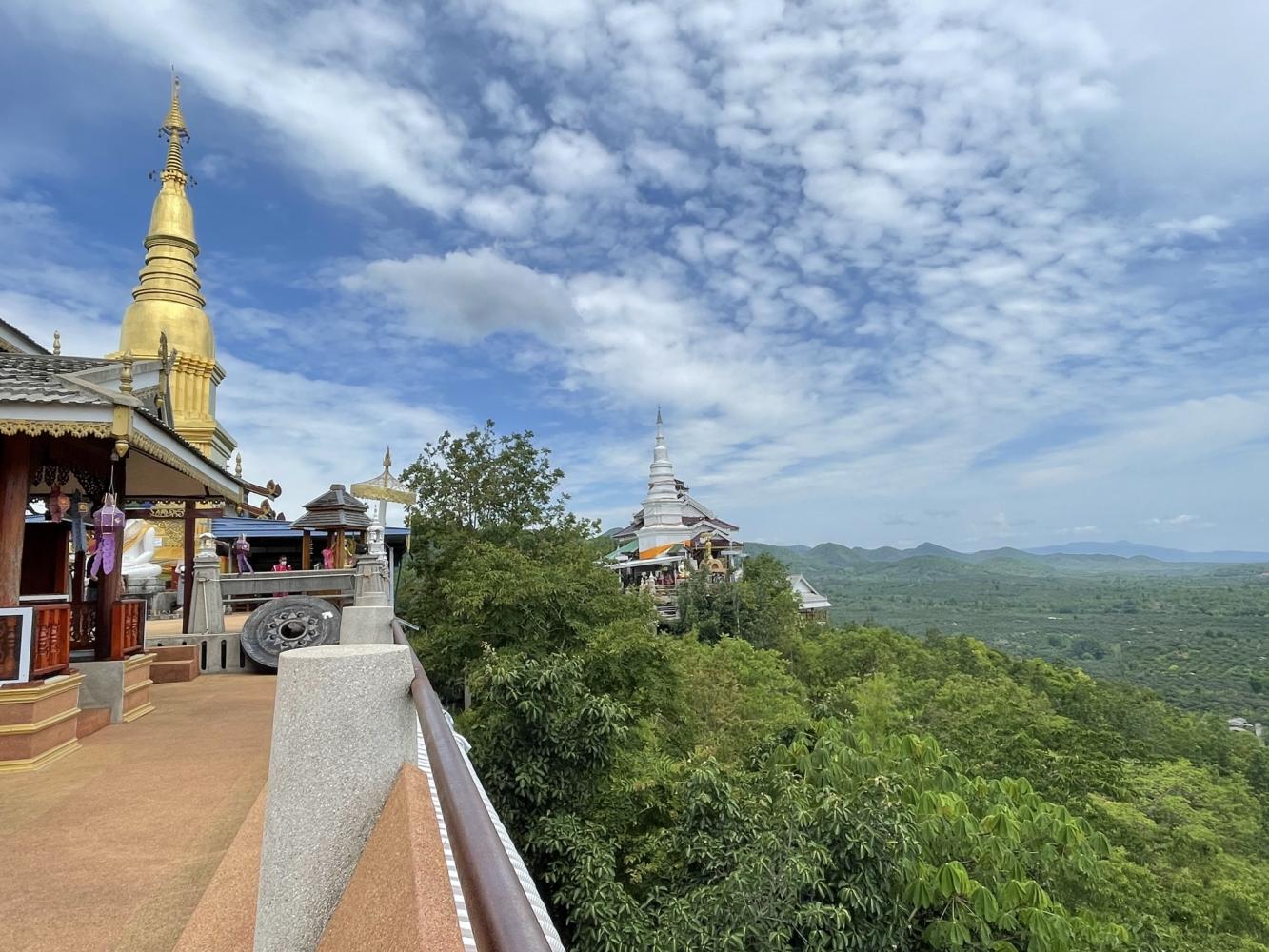 Wat Phra Phutthabat Pha Nam houses gold and white pagodas. Worshippers can climb to the top for a breathtaking vista of lush greenery. 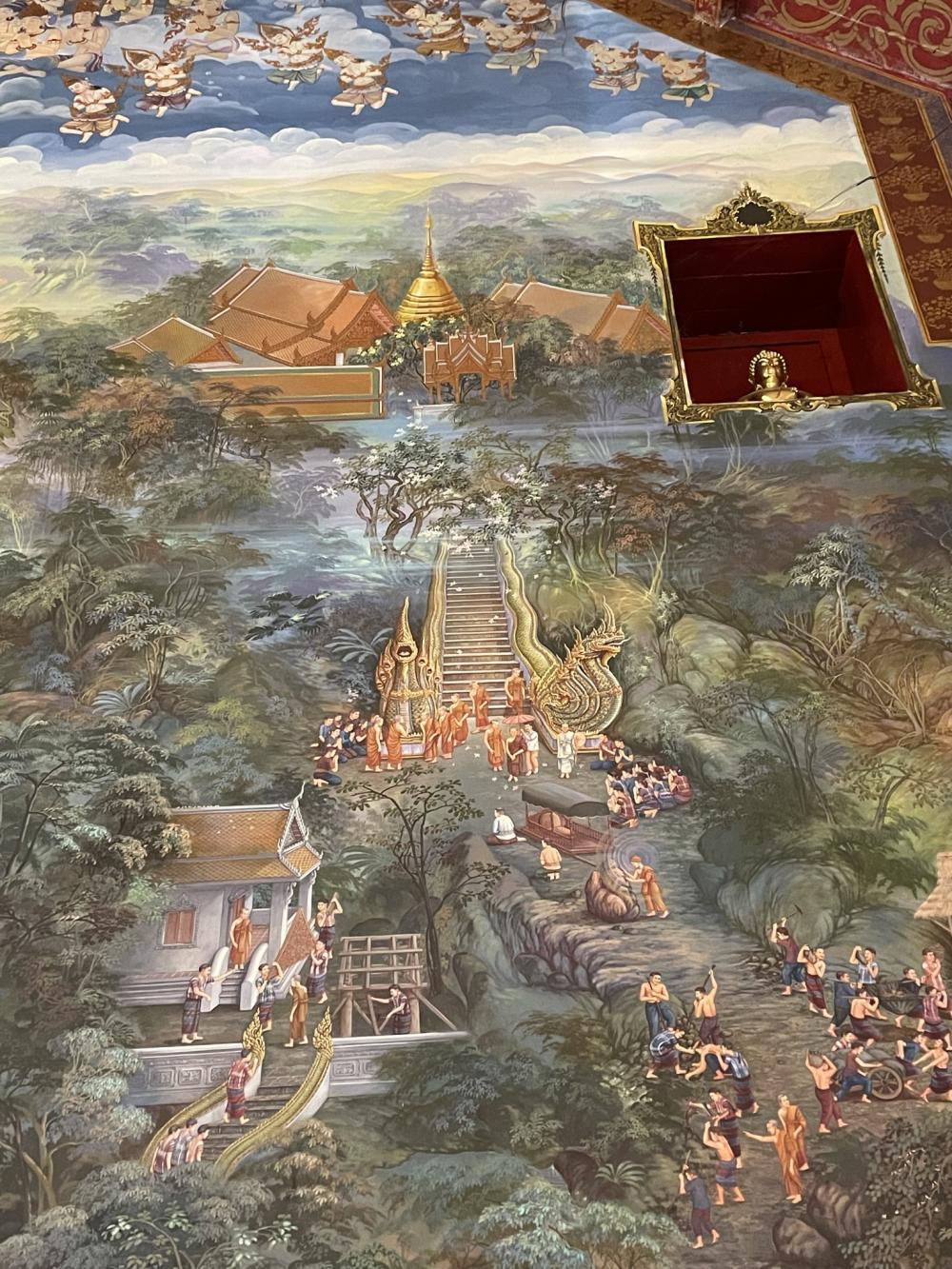 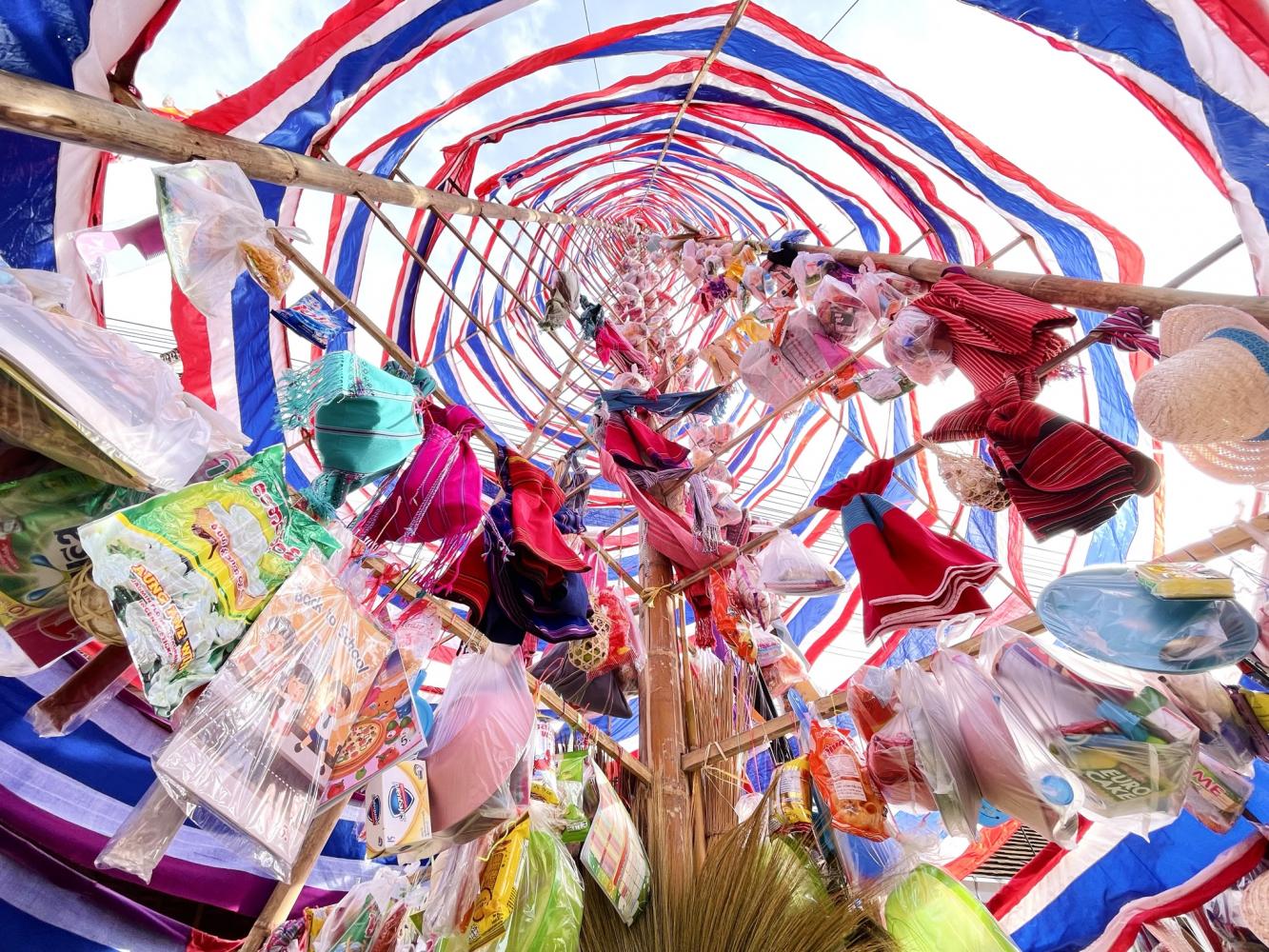