Complicated history and a comeback
Travel

Complicated history and a comeback

On the partition of a quiet seaside wood house is more than an old photo from circa 1881. It is hard evidence that King Chulalongkorn (Rama V) and his entourage, including his half-brother Prince Damrong Rajanuphap, visited the island in the easternmost province of Trat before it was subject to French rule. Despite the withdrawal of troops, colonial legacies remained for years.

Once a private retreat for the royal family, the 1,200-rai island is now home to hundreds of deer, coconut trees, and local inhabitants. "He came to Koh Kradat 10 times between 1873-1907. His last trip coincided with the transfer of the province's sovereignty [from France] and his return from a European trip," said Thanat Bhumarush, tourism division officer of the Bangkok Metropolitan Administration, who took us on a guided tour of the archipelago.

Trat was briefly under French rule between 1904-1906. From the 1860s, colonial pressure intensified in the region. While the British nibbled away at the southern border and grabbed a chunk of Burma, the French took Saigon and sought a protectorate over Cambodia. The Franco-Siamese Crisis of 1893 (Ro So 112 Incident) culminated in a treaty that changed the map of Siam.

"At the time, France demanded the province of Chanthaburi, not Trat, because it thought the community of Vietnamese Catholics would help justify annexation," he said. "After occupying it for 10 years, France [withdrew and] seized Trat and its group of islands -- Koh Chang, Koh Mak, Koh Kradat, and Koh Kut -- for another three years."

After negotiations, France agreed to return Trat, except Koh Kong, to Siam, but in exchange for three Khmer provinces -- Siem Reap, Battambang, and Sisophon -- covering a total area of 50,000km². Siam gave it up to retain its sovereignty. In 1907, a transfer ceremony took place in the provincial hall, followed by a joyful celebration. 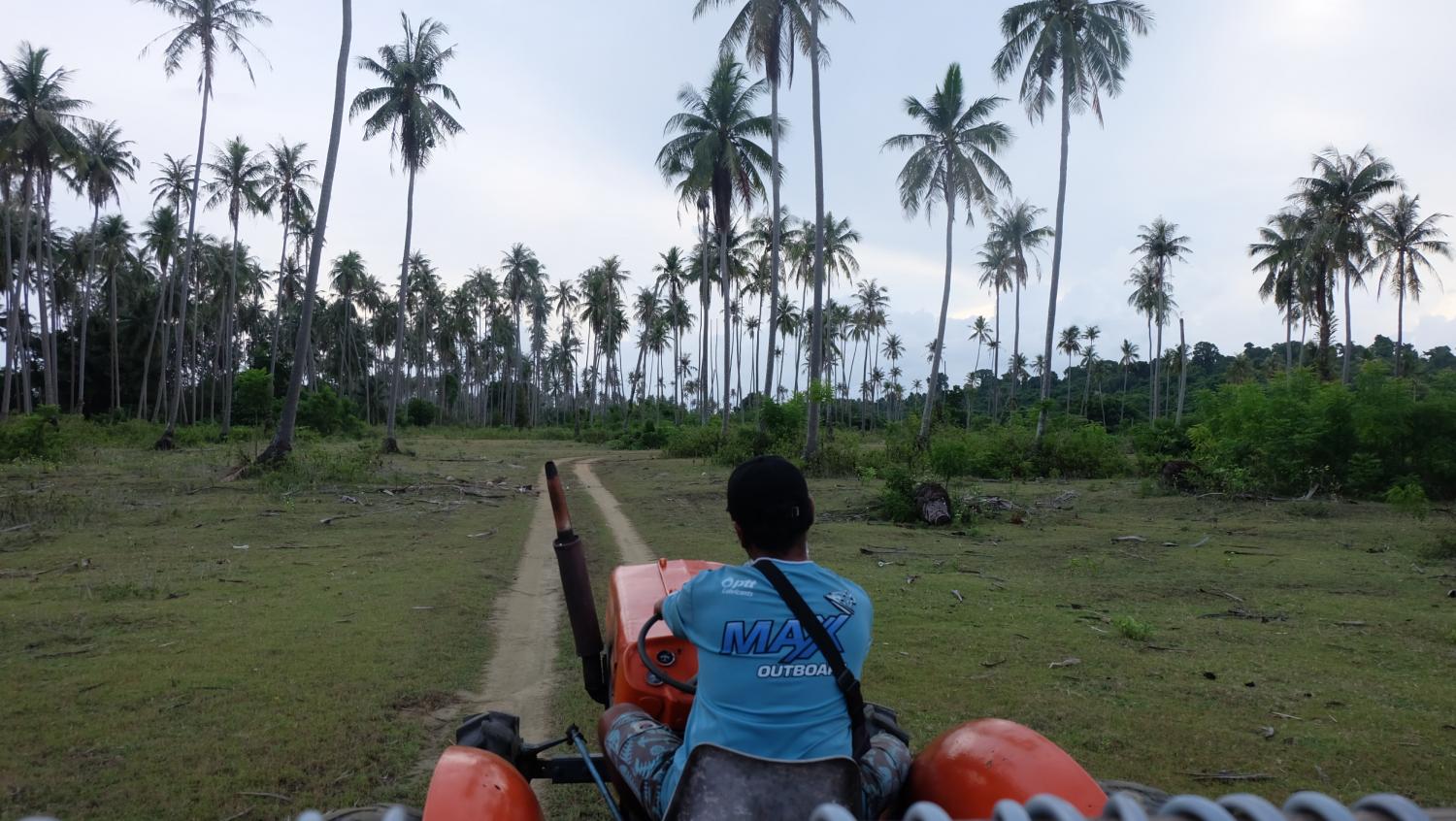 In the afternoon, we returned to shore and went to a fishing village, Ban Tha Ranae, once affected by mining. Standing on a paddleboard, we plied the river to explore the verdant mangrove forest. Intertwined roots form a beautiful piece of land, Lan Taboon, at low tide. However, it was humid and infested with mosquitos.

We got up early in the morning to explore the city's old town. Located in front of its new provincial hall, the statue of King Rama V was built in commemoration. The right side of its base shows his speech. "When he returned from his European trip, Siam had already got the province back from France. He made a visit and wished the local people well. He knew many had left their hometown under colonial rule," he said.

Walking further, the colonial-style Trat Museum sits on concrete stilts and boasts a hipped roof (panya in Thai) and a long corridor. It was once the city hall during the reign of King Rama VI. After its office was moved to a nearby location, the old building was declared a national treasure, but ravaged by fire in 2004. After reconstruction, it became the city's learning centre.

We strolled down memory lane. Many exhibitions recounted historic events from early settlement. One of them recounted the French occupation of Trat. On display were replicas of Residence Kampot and the French daily newspaper, reporting on the fierce engagement at the Chao Phraya River and the transfer of the easternmost province to the French high commissioner for Cambodia. 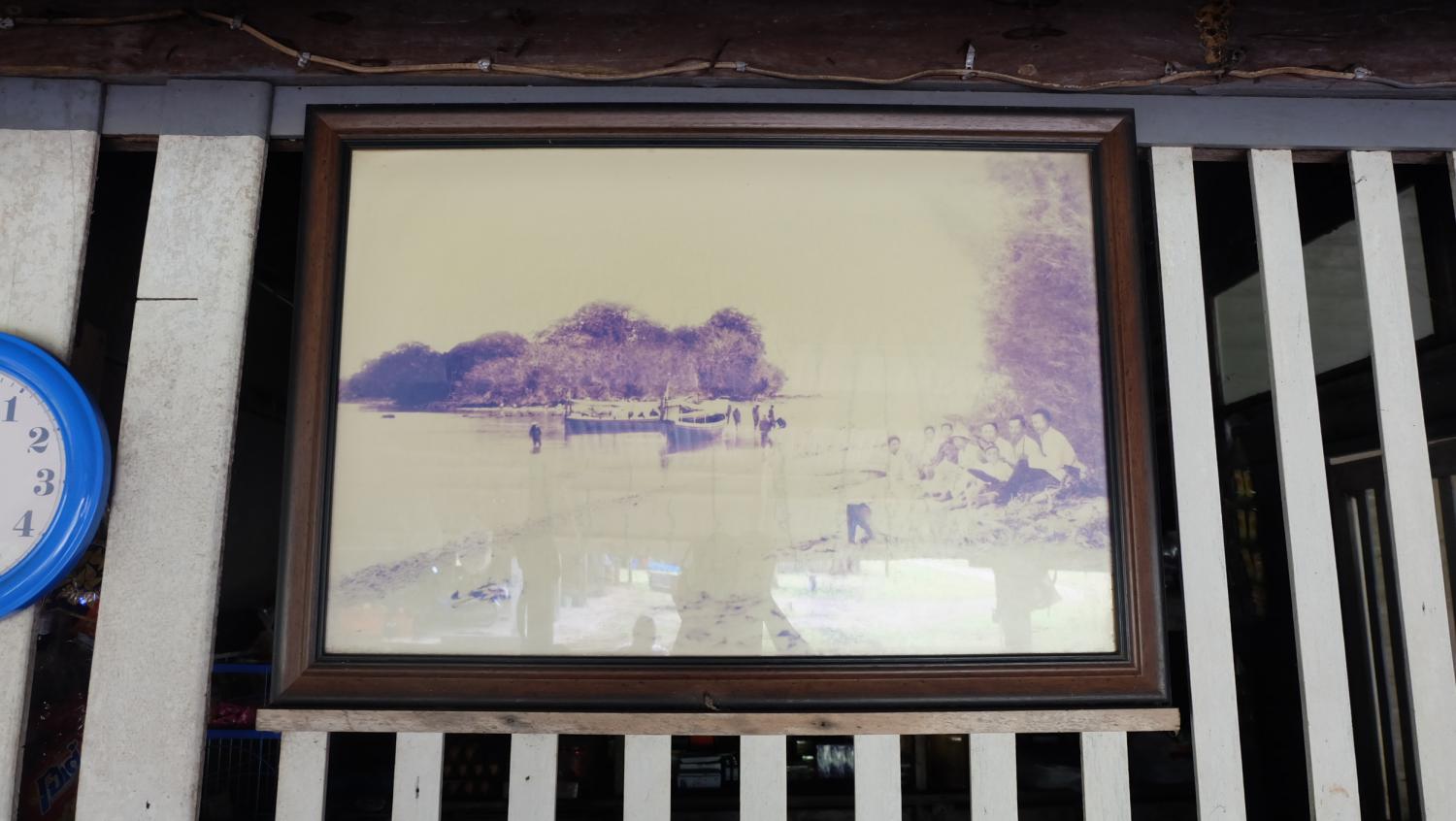 Taken circa 1881, a photo shows King Chulalongkorn (Rama V) and his entourage, including his half-brother Prince Damrong Rajanuphap, visiting the island.

Another room showed the battle of Koh Chang during WWII. It showed warship replicas to compare military capability. While declaring war on Germany, France asked Thailand to sign a pact of non-invasion in Indochina. It complied on the condition that France settled the outstanding border dispute and returned the right bank of the Mekong River. Negotiation failure, however, culminated in a naval clash.

"It is a time bomb. Although France returned Trat to Siam [in 1907], the impact of colonialism didn't vanish but persisted through WWII, the Pacific War, and the Indochina War until now such as the issue of the Preah Vihear temple [on the Thai-Cambodia border]," he said.

Since the French colonial days, Lak Mueang Road has been the main commercial street. It is lined with timber rowhouses, including an old print shop. We arrived at the Residence Kampot before noon. It is a three-storied concrete-and-wood building with a hipped roof and an extended corridor. A governor built it for his bride-to-be daughter, but the French commissioner occupied it for a few years. Under colonial rule, he supervised military and civilian affairs.

"Besides a residence, it was a local court and consulate, which explains why the building was different from neighbouring houses. It is enclosed by a wall. Most of those who stood sentinel were Vietnamese or Khmer. A nearby tower was used for communication and surveillance because it was the highest structure in the neighbourhood," he said. 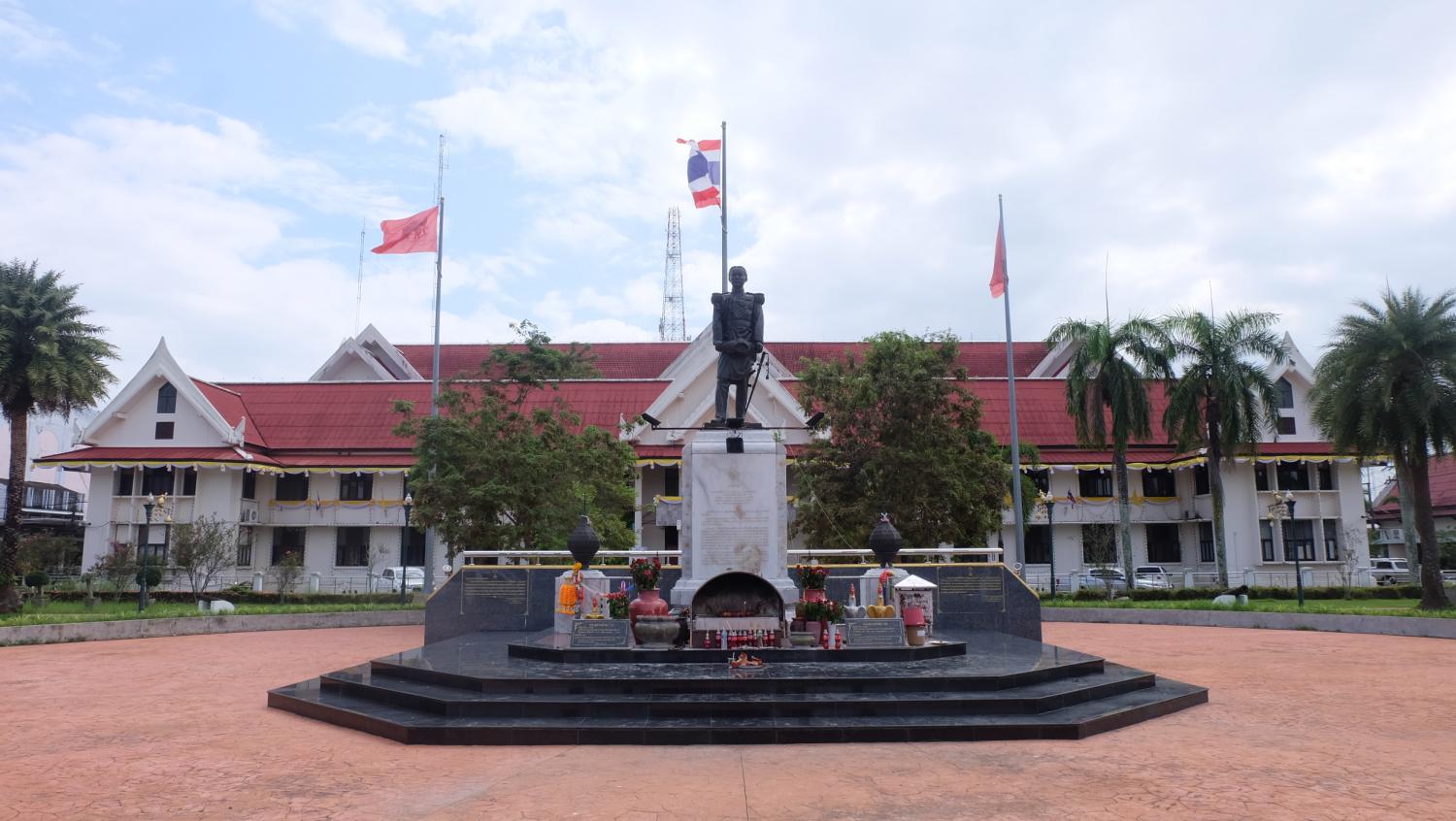 The statue of King Rama V in front of the new provincial hall.

An alley led to the Rak Khlong Bang Phra community. Once a tourist destination, the neighbourhood has become subdued. It dates back to the early Rattanakosin period. Houses are located by the canal, which were used for the transport of goods and people. Perched on the structure is the sala tha luang pier for King Rama V.

We further explored sacred places in the city. Some of them saw Siam's interaction with foreign countries. Situated on the main street, the City Pillar Shrine is the spiritual anchor for community residents.

"When King Taksin came here, he erected the pillar to unite people. Later, a governor found that people worshipped a shiva linga, a representative image of the Hindu god, for good health and therefore transferred it to the shrine," he said.

According to legend, French officials ordered the removal of the pillar because it commanded respect from local people, but to no avail, because elephants and supervisors all died a tragic death. Its previous shrine was made of wood and covered with zinc sheets. It subsequently underwent renovation. Many activities are held here on special occasions every year.

Near the shrine, Wat Yotha Nimit is said to be a site where King Taksin gathered troops, according to a chronicle from the Thonburi period. The temple's windows do not have royal patterns. He was possibly the son of a Teochew Chinese migrant gambler or trader and had a Thai wife. Despite having no claim to rule, he founded a new capital of Thonburi in 1767. During the reign of King Rama III, troops were mobilised here to attack the Vietnamese force, hence the renovation of the temple. 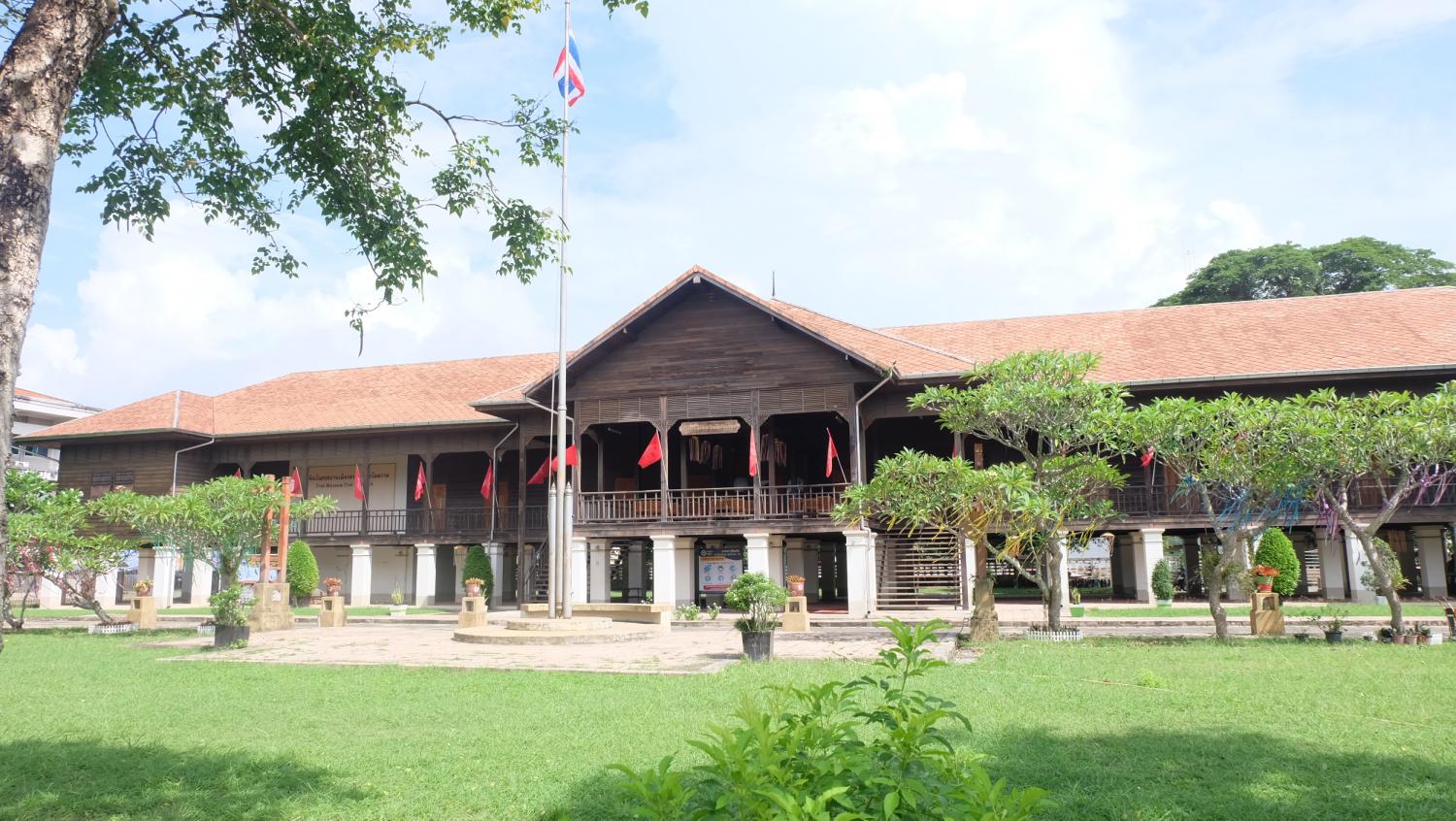 Its cavernous building boasts Chinese-style murals. The use of indigo is characteristic of the reign of King Rama IV. However, local artisans were very late in adopting the artistic style. They created a curtain frame and incorporated mythological creatures, like dragons, swans, and qilins, in hierarchical order. They also depicted scenes from the Vessantara Jataka in Theravada Buddhism. Some of them include a local couple, resembling Adam and Eve, and foreign soldiers.

Our trip came to a close at Wat Bubpharam. An inscription was found here in the Ayutthaya period. In a similar vein, murals are painted in the Chinese style. While the upper wall shows a couple of swans in the midst of blooming peony, the lower structure shows various groups of people, like the Chinese and the Siamese, joining in the worship of the new Buddha.

Its museum houses a wide range of artefacts, some of which demonstrated the cultural exchange between Siam and other countries. "For example, Siamese officials asked Chinese artisans to make porcelains because they are technologically superior, but their deities were different from our model because they have single eyelids," he said. 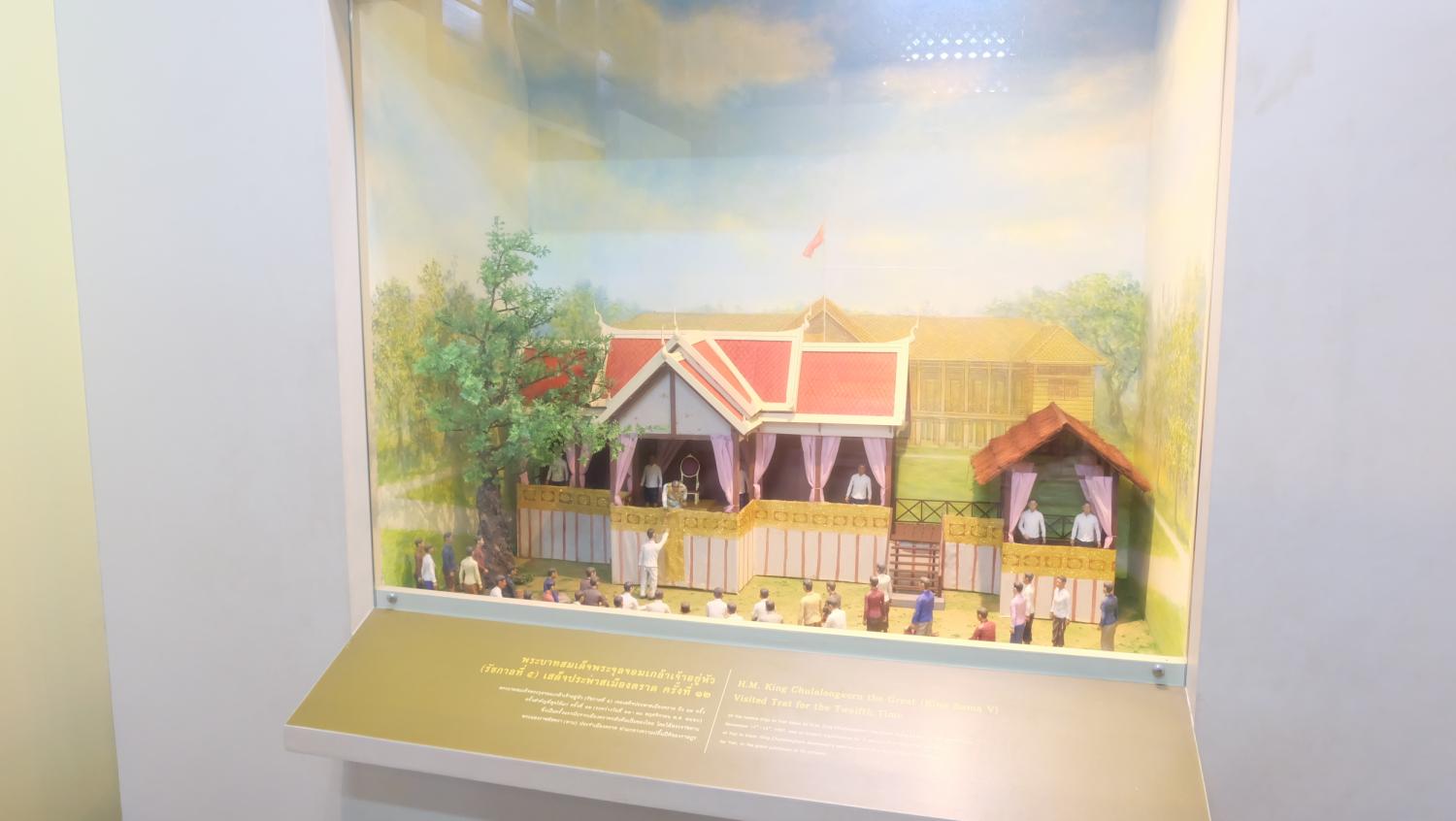 A model shows that King Chulalongkorn bestowed a special sword in his 12th visit to Trat in 1907, which coincided with its return to Siam. 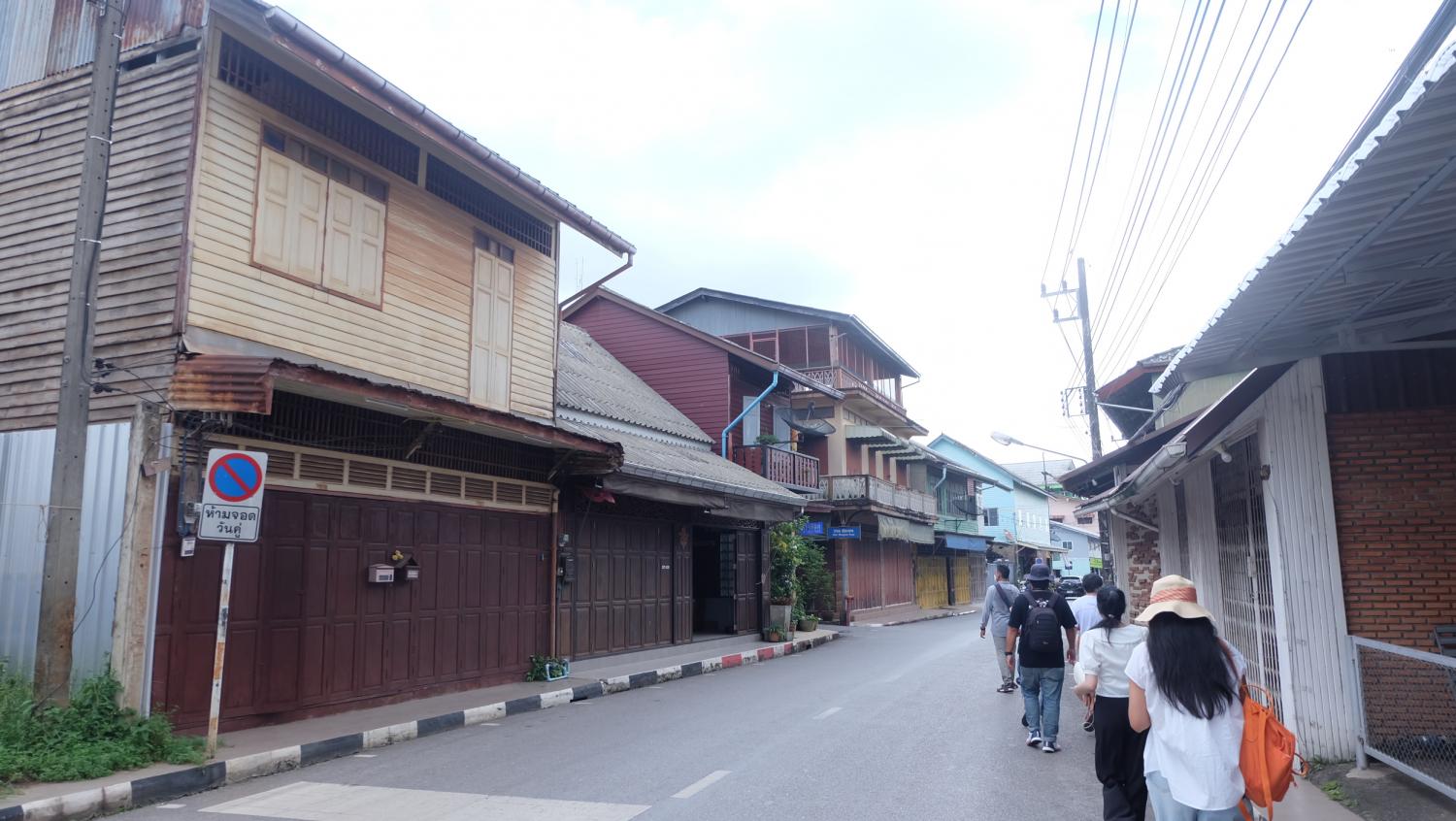 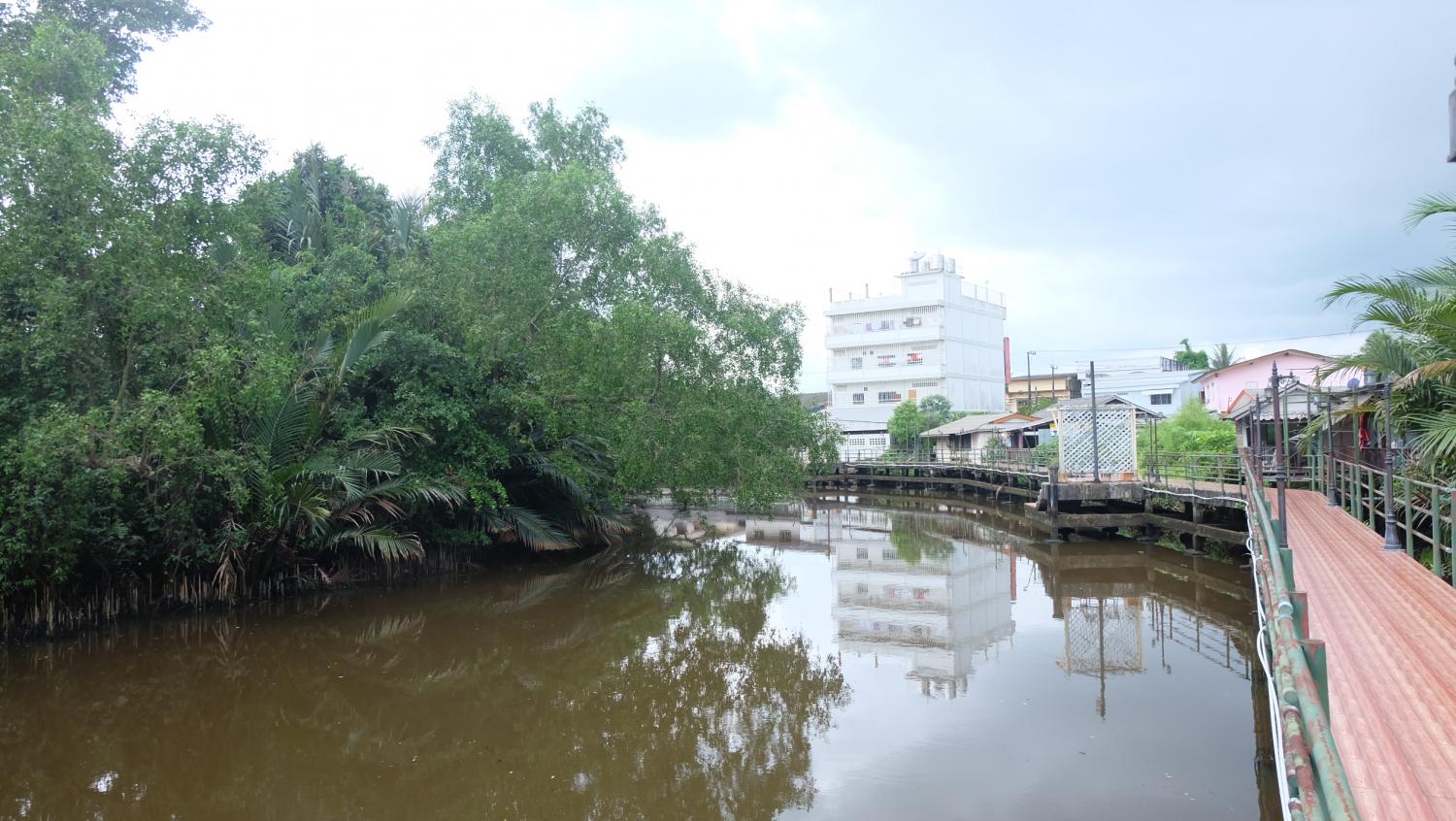 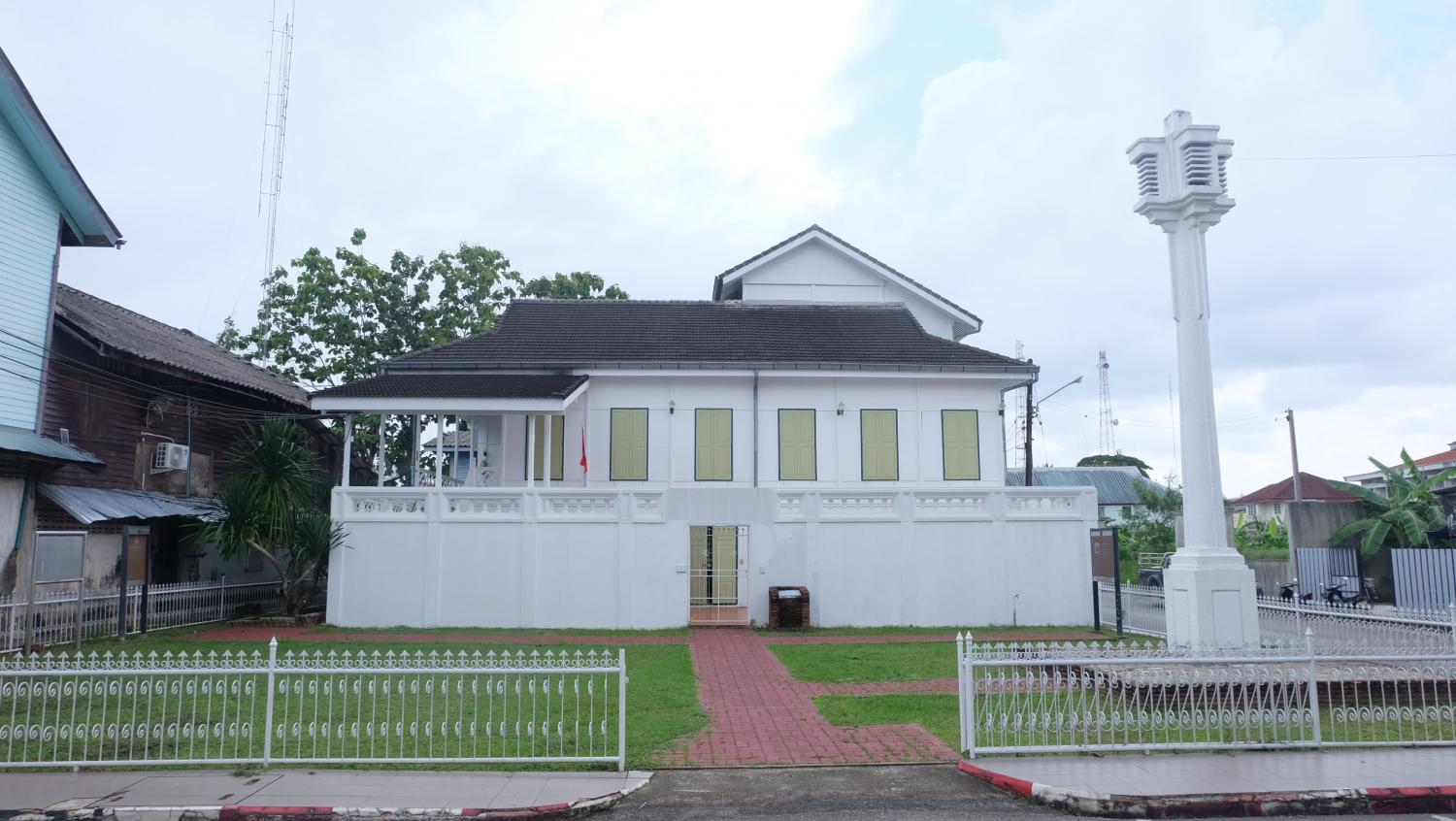 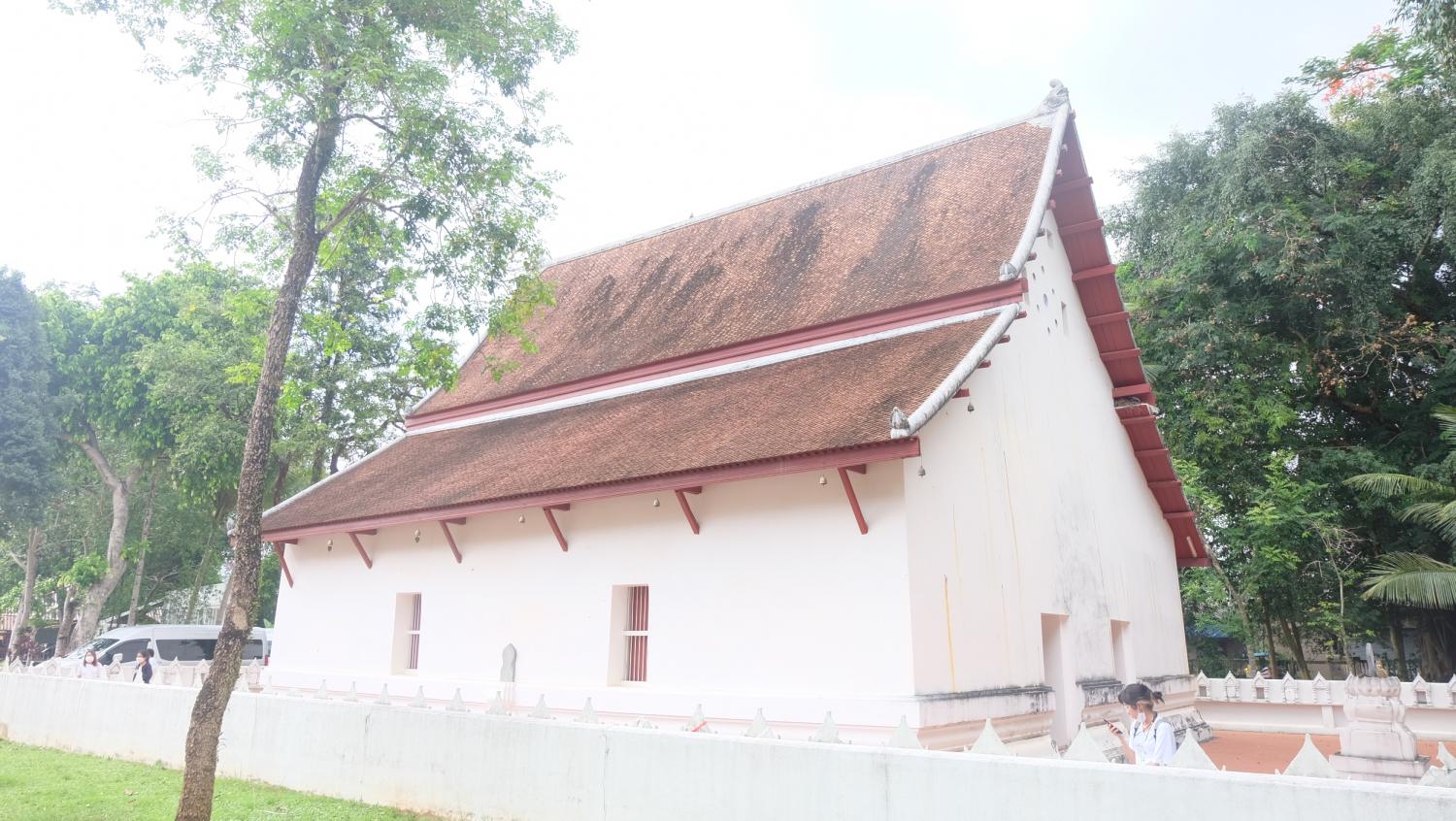 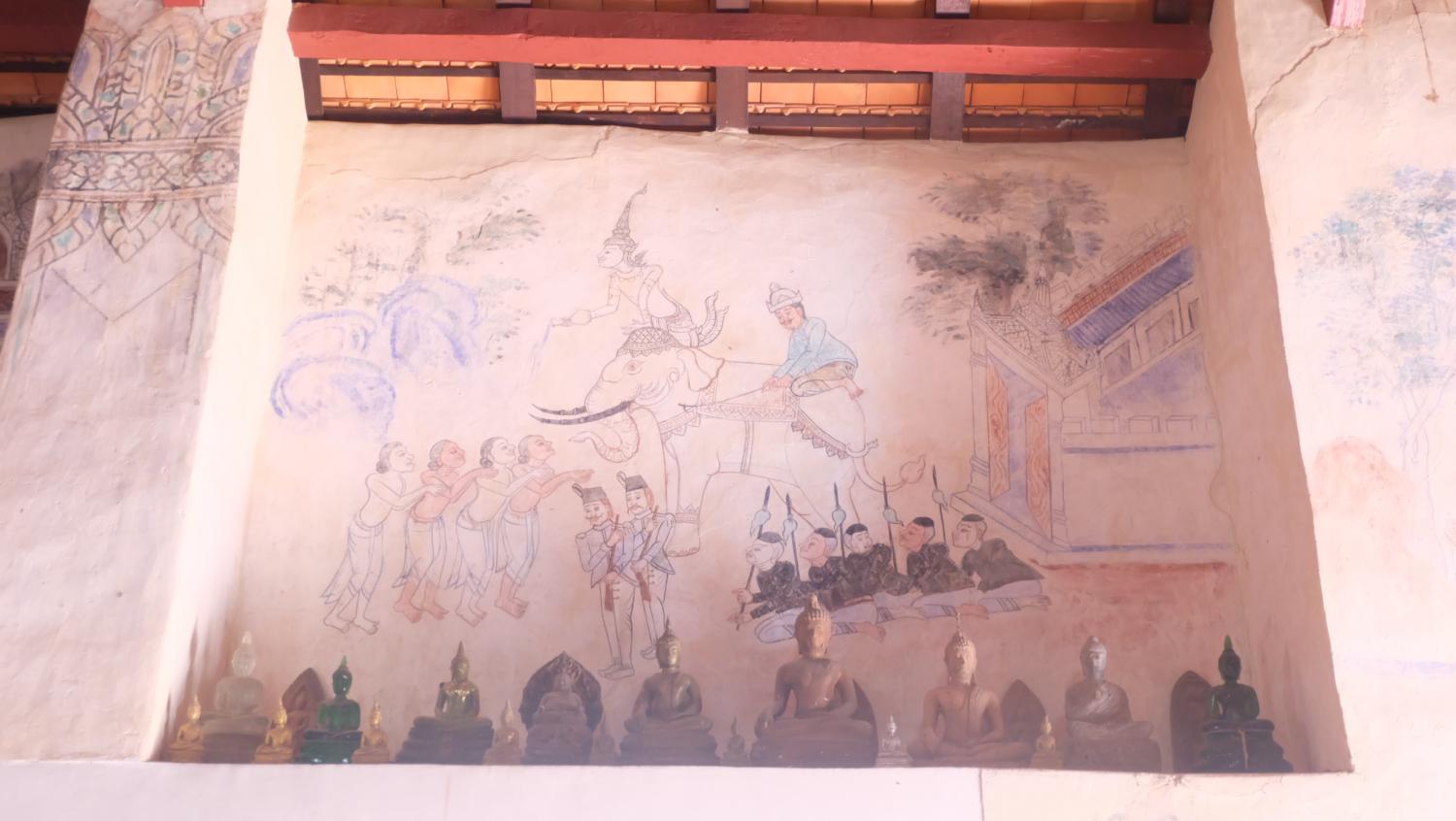 Foreign soldiers in the depiction of the Vessantara Jataka at Wat Yotha Nimit. 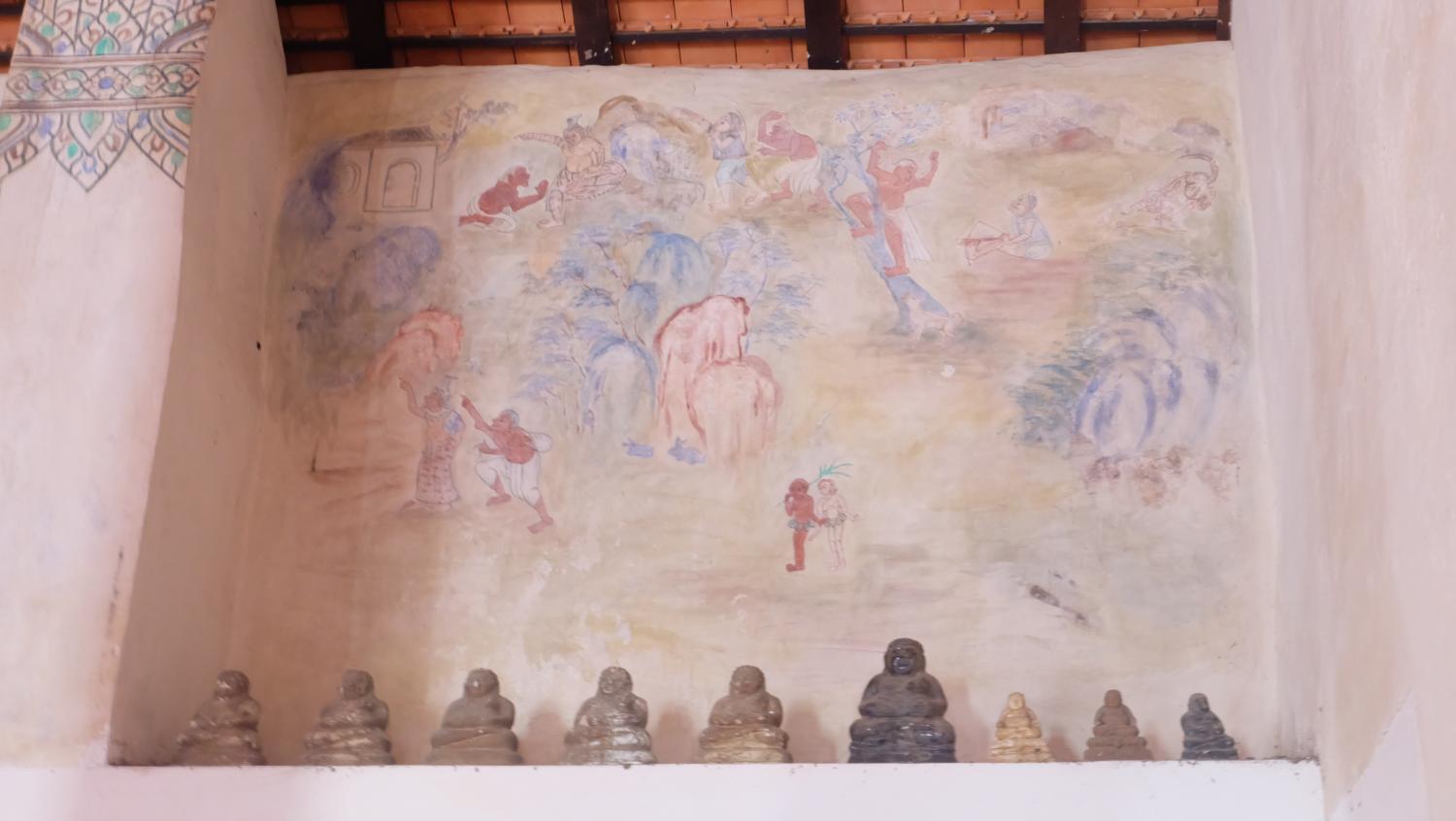 A local couple, resembling Adam and Eve, in the depiction of the Vessantara Jataka at Wat Yotha Nimit.

Chinese-style mural (lower) shows that various groups of people, like the Chinese and the Siamese, joined in act of worship of the new Buddha. 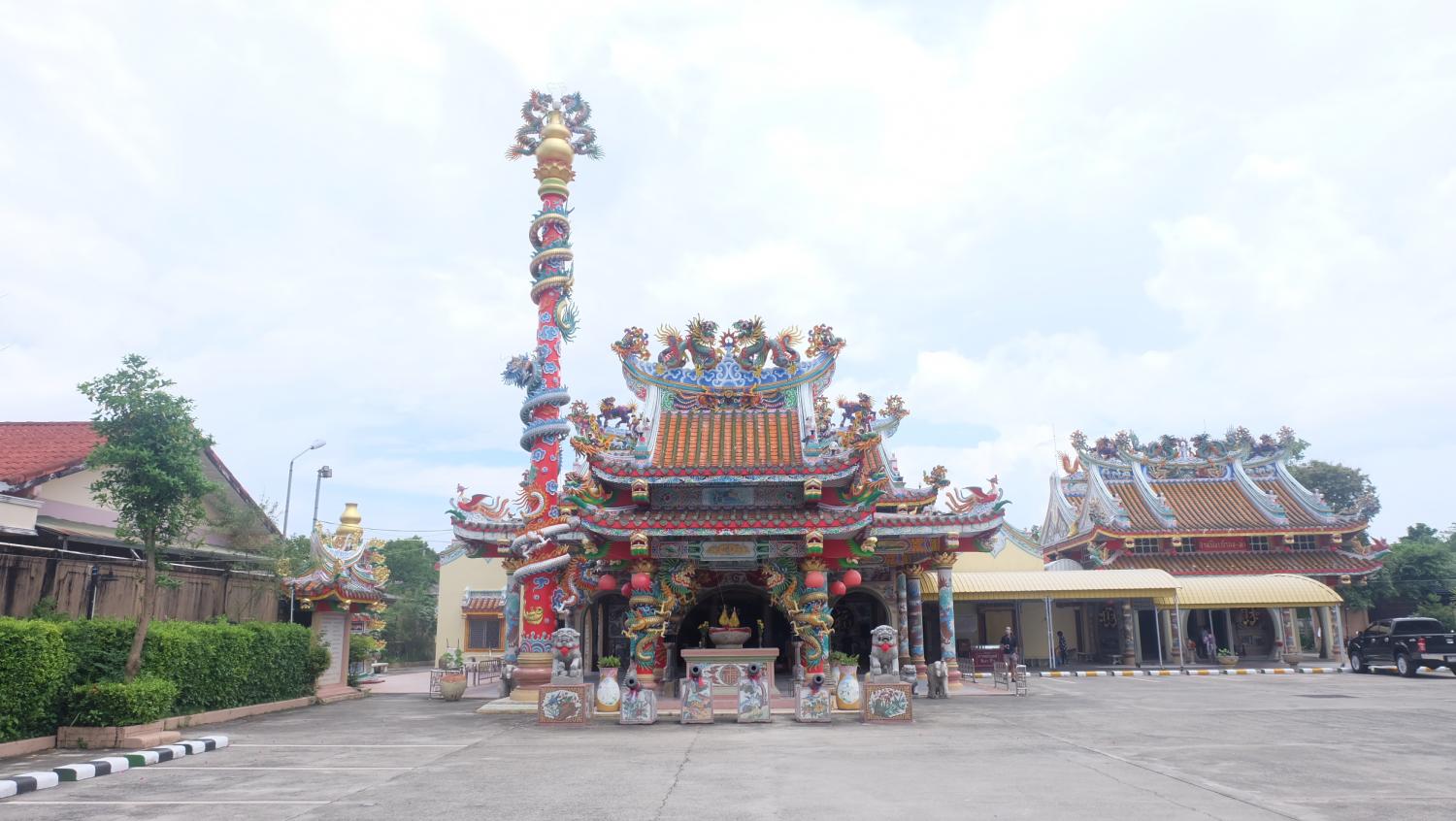 A French daily paper reports on fierce engagement on the Chao Phraya River. 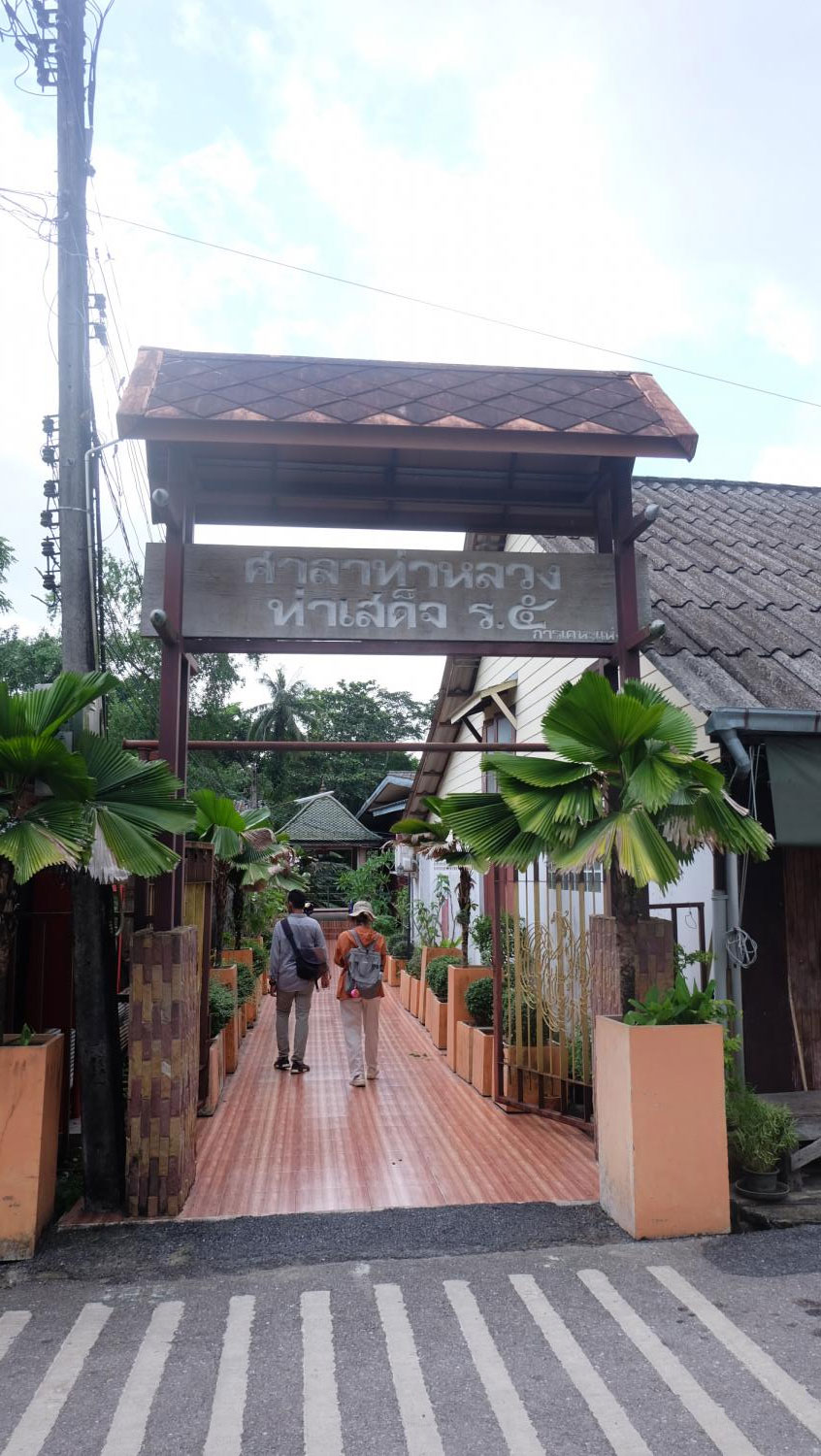 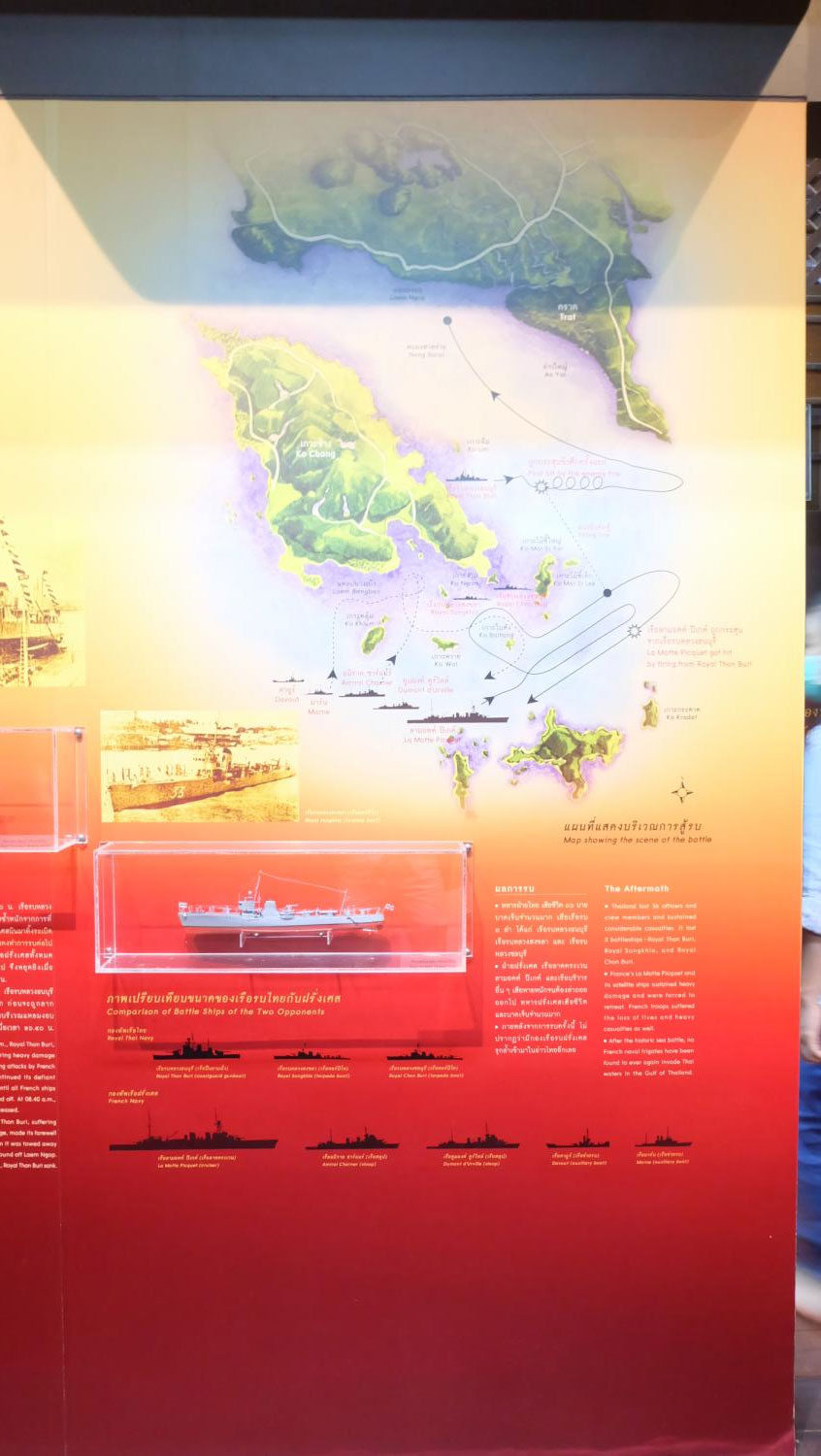 Warships in the battle of Koh Chang.

An escape to another world