After the sun sank over the Wang River, a caravan of classic horse-drawn carriages stationed in front of Wat Chiang Rai and acting Capt Supoj Chairuamkoon was in the saddle to welcome tourists on a sightseeing tour. In the northern town of Lampang, this has long been a popular way of exploring historical sites and watching local life from day to night.

When a bell rang for boarding, a four-year Mongolian pony led the squadron, with turn signals, tail and brake lights, as well as a vehicle licence and type 1 auto insurance to cover individuals and vehicles involved in an accident.

Riding down Wang Khwa Road, we caught a glimpse of Wat Sing Chai guarded by eight lion-like statues and a monument of Phaya Phrom Wohan, a famous Lanna poet during the reign of King Rama I, and the Sing Chai community, which is Lampang's first horse-drawn carriage hamlet.

Dating to the reign of King Rama IV, the first horse-drawn carriages began to arrive in Siam and quickly became a major mode of transportation during the reign of King Rama V until they were replaced by automobiles. During this time, horse-drawn taxis were created by migrants from Pakistan and India to transport passengers from the railway station to downtown, kids to schools, parcels to the post office, ill people to the hospital, and commodities for commerce. 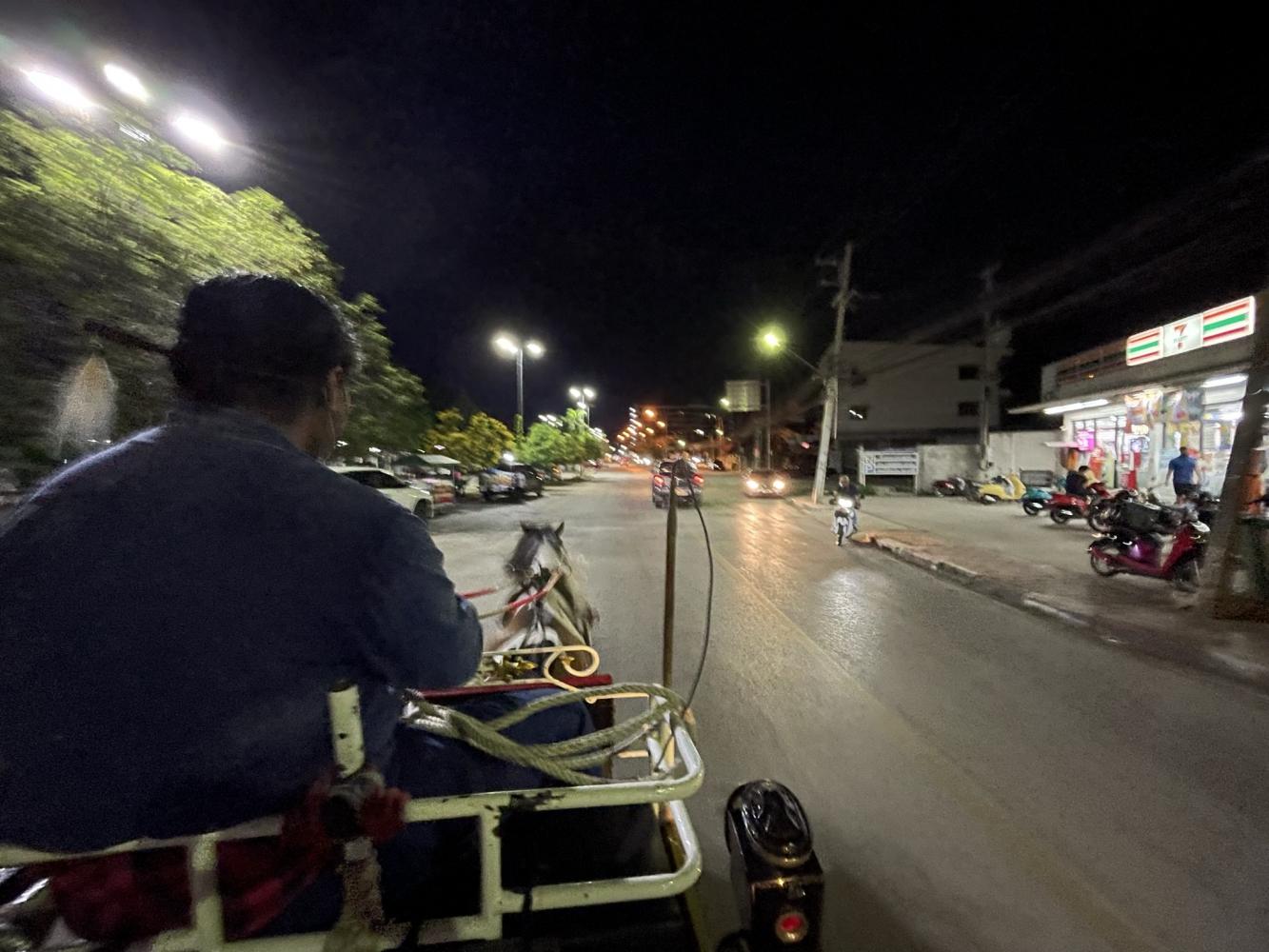 When the authorities saw potential in Lampang's tourism, they used horse-drawn carriages as a magnet to create a schedule of unique city tours in which people of all ages could enjoy the riding experience.

"Interested in history and culture, I worked as a carriage driver and tour guide in my spare time. We founded the Lampang Horse-drawn Carriage Association, which now includes more than 50 drivers and 100 carriages," Ajarn Supoj said.

"At the age of two, all horses are schooled before joining the service at the age of four. The drivers must be familiar with the habits of their animals. Each horse only works three or four hours each day, and all drivers have a second job as a farmer, labourer, or craftsman to supplement their income during the off-season."

Set against the backdrop of a black sky, Wat Damrong Tham boasts a traditional Thai-style vihan rather than a Lanna design. An English racecourse polo club has been turned into a public park and the Baan Dong community once served as Lampang's principal carriage wheel manufacturer.

We made a stop at Wat Si Rong Muang on Tha Khrao Noi Road, which was erected during the reign of King Rama V. It was a collaboration between nine Burmese families and five British firms that played a major role in Lampang's teakwood industry under the Bowring Treaty.

Embraced with lush landscapes, the venerable wood vihan was created in Burmese style to highlight first-class craftsmanship, with the ceiling and pillars studded with precious gems and coloured glasses from Inwa that resemble vines, using ancient techniques to blend lacquer and blady grass ashes. 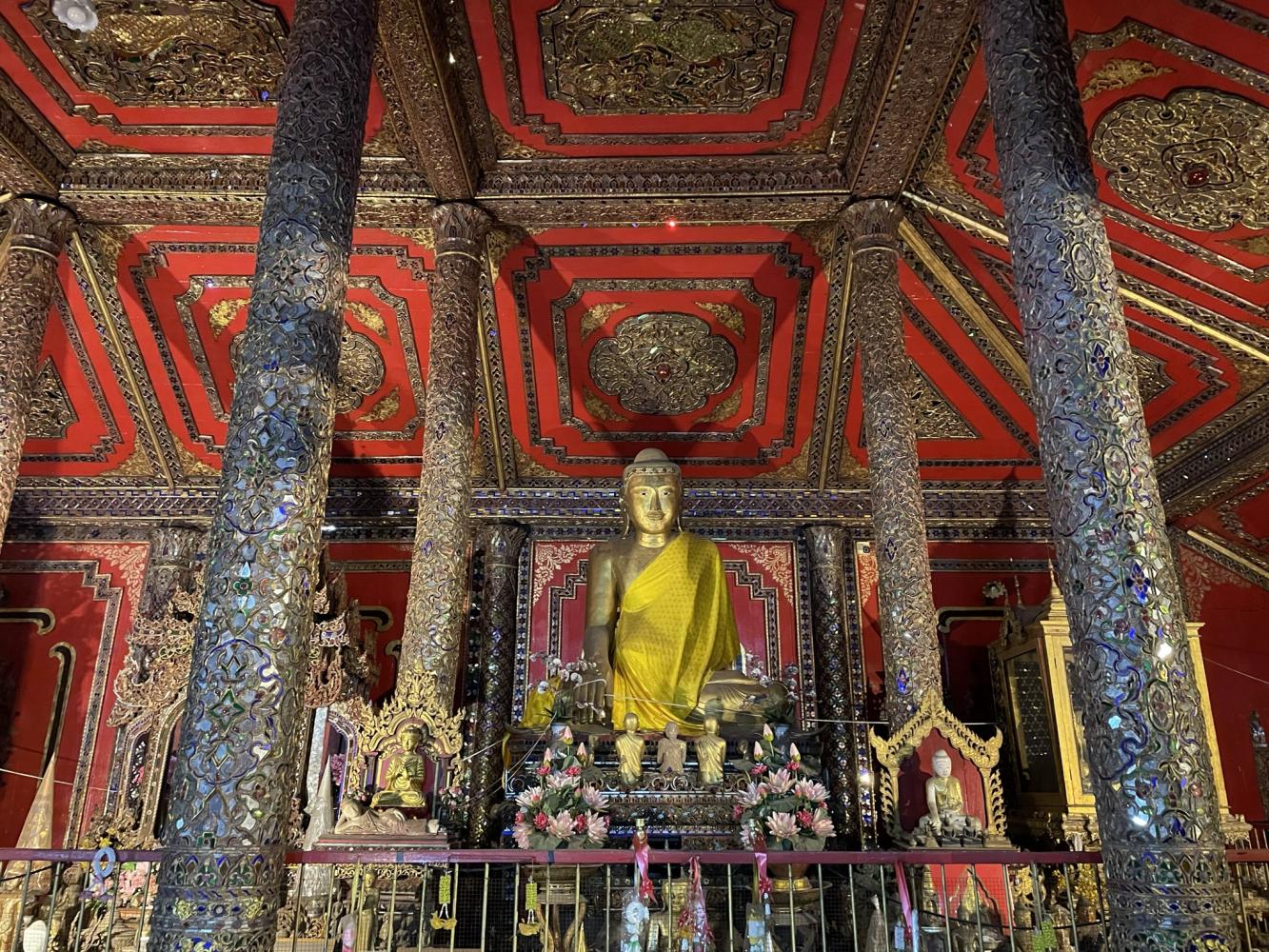 The Four Diamond Kings of Heaven serve as guards in the centre, while a white marble-like Buddha statue sits alongside the country's largest gold teak carved Buddha statue in a posture of subduing Mara. Just a few steps from the vihara, an ubosot showcases a simple yet elegant British design through the arched roof, towering square columns and lion-like statues on the top.

"According to Burmese and Mon beliefs, cutting trees harms angels' dwelling, therefore they constructed the temples to pay devotion to Lord Buddha. There are nine Burmese temples in downtown Lampang, most of which combine Burmese, Mon and European architecture under one roof," Ajarn Supoj explained.

"Previously, all logging was transported via the Chao Phraya River and traders were required to pay a fee. Ratchadaphisek Bridge was built by King Chulalongkorn to strengthen relations between Siam and the Lanna kingdom, with the goal of protecting the northern region from British colonisation."

After leaving the temple, we headed left on Suren Road and saw a former opium den that is now a police station, as well as street art lanes and popular street food shops serving pad Thai, hoy tod, and yen ta fo.

The Nakhon Lampang Railway Station still exists at the end of the road, commemorating the arrival of the town's first train in 1916, which transformed Lampang into the most bustling commercial hub in the north. 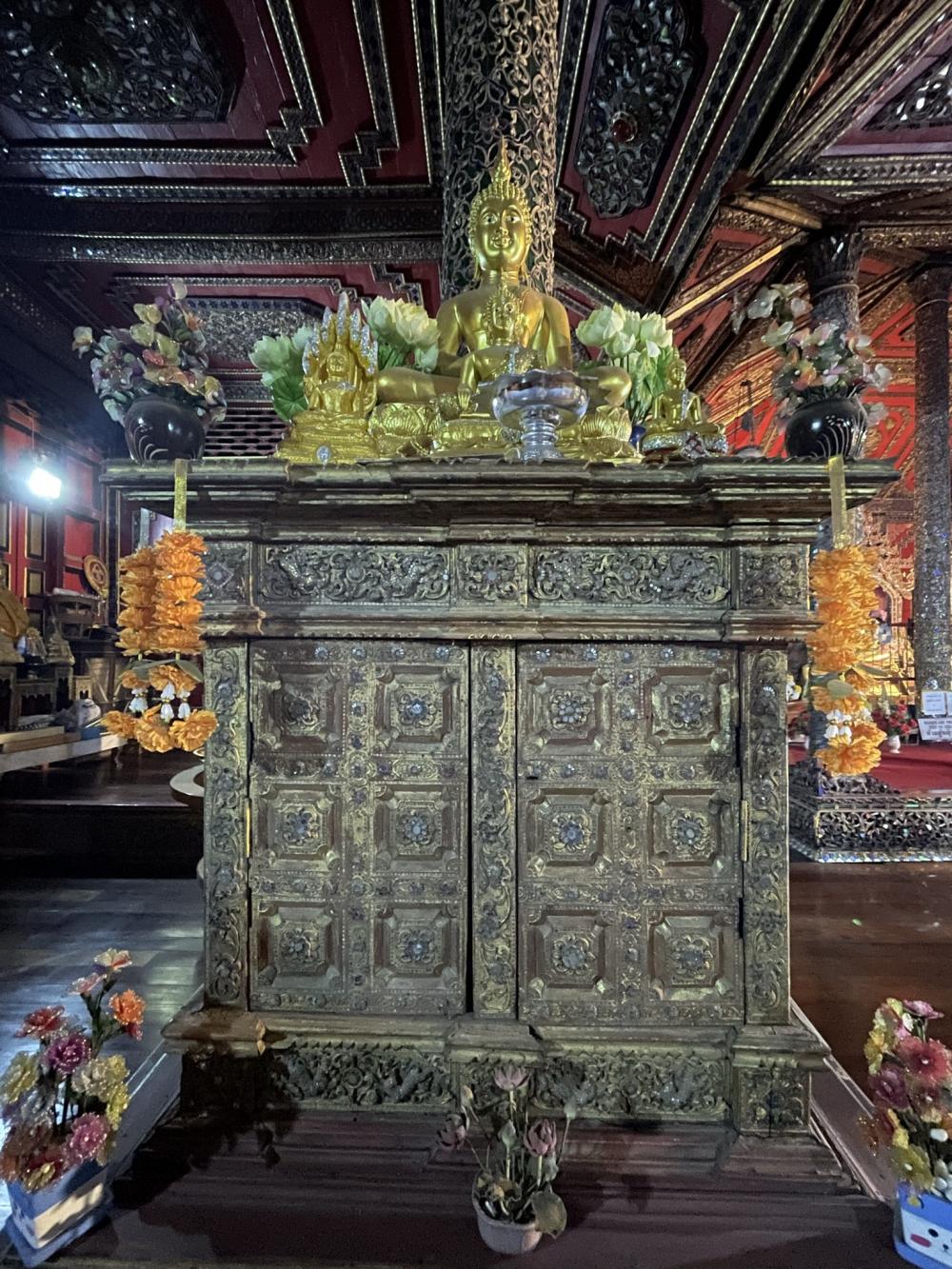 The colourful glass pillars and a teak scripture cabinet at Wat Si Rong Muang are examples of top-notch Burmese workmanship. 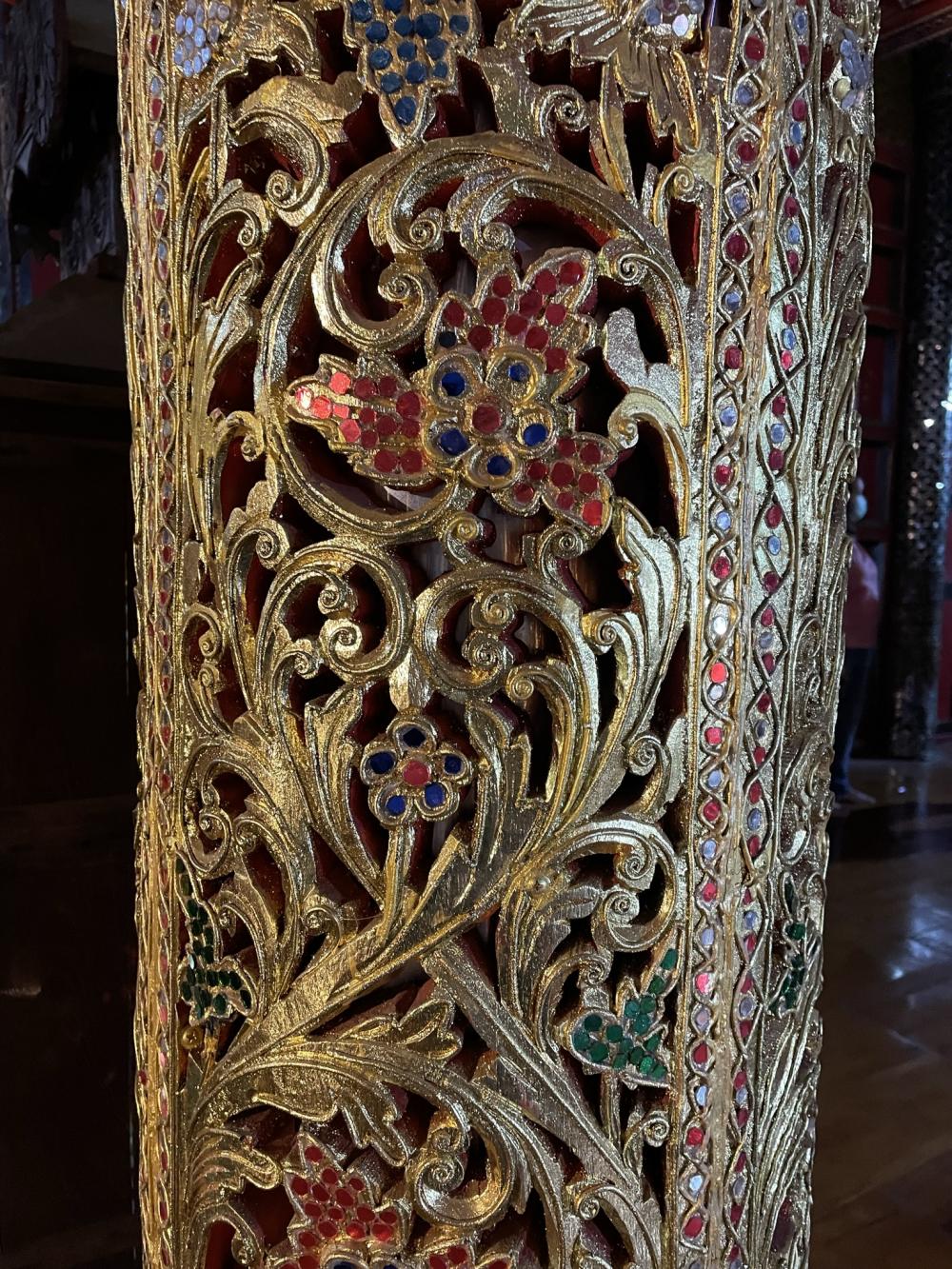 A German architect created it in the Lanna colonial style, and it served as the terminal station until the Thai Railway Department spent a decade building the Khun Tan tunnel to smoothen the train track through the mountain to Chiang Mai.

Depending on their interests and lifestyle, tourists can customise their itinerary by paying 300 baht for a 30-minute trip and 400 baht for a 60-minute excursion. Ajarn Supoj also offers a range of unique amulets such as keychains and bracelets made from horsehair and horse hooves to protect you from harm, as well as dream catchers fashioned from horseshoes for those looking for a unique keepsake.

We awoke early the next morning, shifted to a van and continued our journey to Wat Satsana Chotikaram (also known as Wat Pa Fang) on Sanambin Road. It was erected by the Mon couple Pho Thao Ausuay-at and Mae Thao Khamwan Suwanna-at in 1892 in a blend of ethnic Mon-Burmese-style to pay homage to Buddhist beliefs.

Walking through the entryway made us feel as if we were in the middle of the jungle, and we discovered an old teak vihan with glistening multicoloured glass and gold lacquered wood carved designs on the ceiling, friezes, and pillars. Visitors can stroll up a path to the massive gold pagoda in the centre of the compound, which houses Lord Buddha's relics brought from Myanmar in 1906. 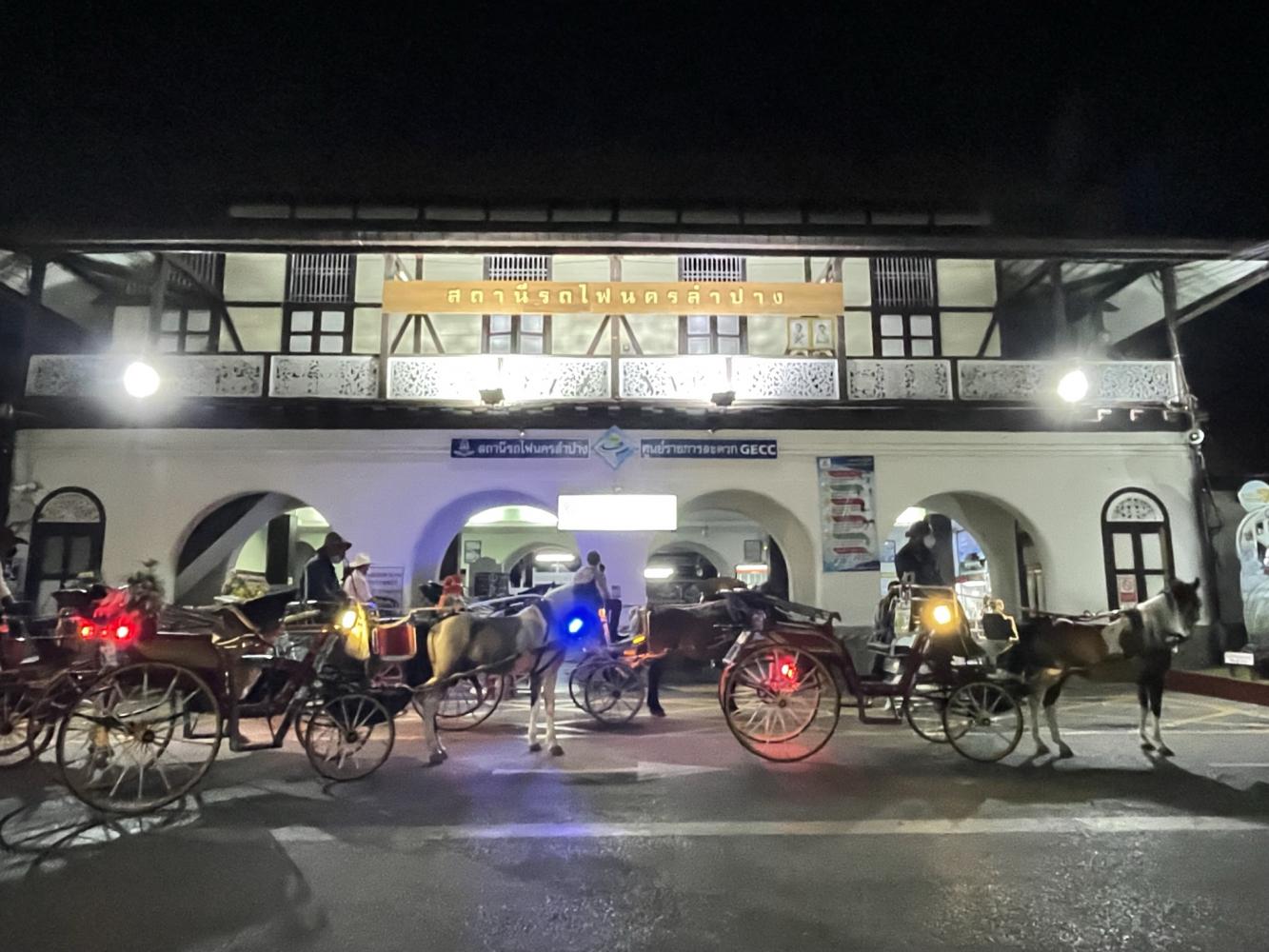 The Nakhon Lampang Railway Station was built in 1915 in Lanna colonial style.

Alongside, the small ubosot displays a tiered Burmese-style wood roof with stucco shaped like interwoven flowers. Inside, it is home to wood carved Burmese-style Buddha statue, with a round face, crimson lips and long ears, dressed in a ruby-studded robe and a crown. To celebrate a blend of Burmese and European art, the ceiling is covered with multicoloured glasses and small carved figures of angel, peacock, demon, sing and cupid.

Located across the street from Wat Pa Fang, Wat Chai Mongkhon was built 300 years ago on land that previously served as a gathering place for warriors and an execution ground. Between 1877 and 1907, a group of Burmese merchants and local villages expanded the temple compound by constructing a contemporary wood vihan that merged Eastern and Western architectural art to mimic Mount Meru, according to cosmic Buddhist theology.

The gable and pillars are decorated with glass inspired by a deity and intertwined flowers. Inside, it enshrines a gold Buddha statue influenced by Maha Sakyamuni in Mandalay, while the curved wood curtain depicts the Lord Buddha's life and the ceiling is trimmed with coloured glass in the shapes of peacock and rabbit to represent day and night.

Just a 10-minute drive from downtown Lampang, experienced landscape designer Keerati Sriyong has turned his house into Suan Phen Sri, where visitors can enjoy entertaining workshops on ceramic and tie-dyed clothes made from natural colours. 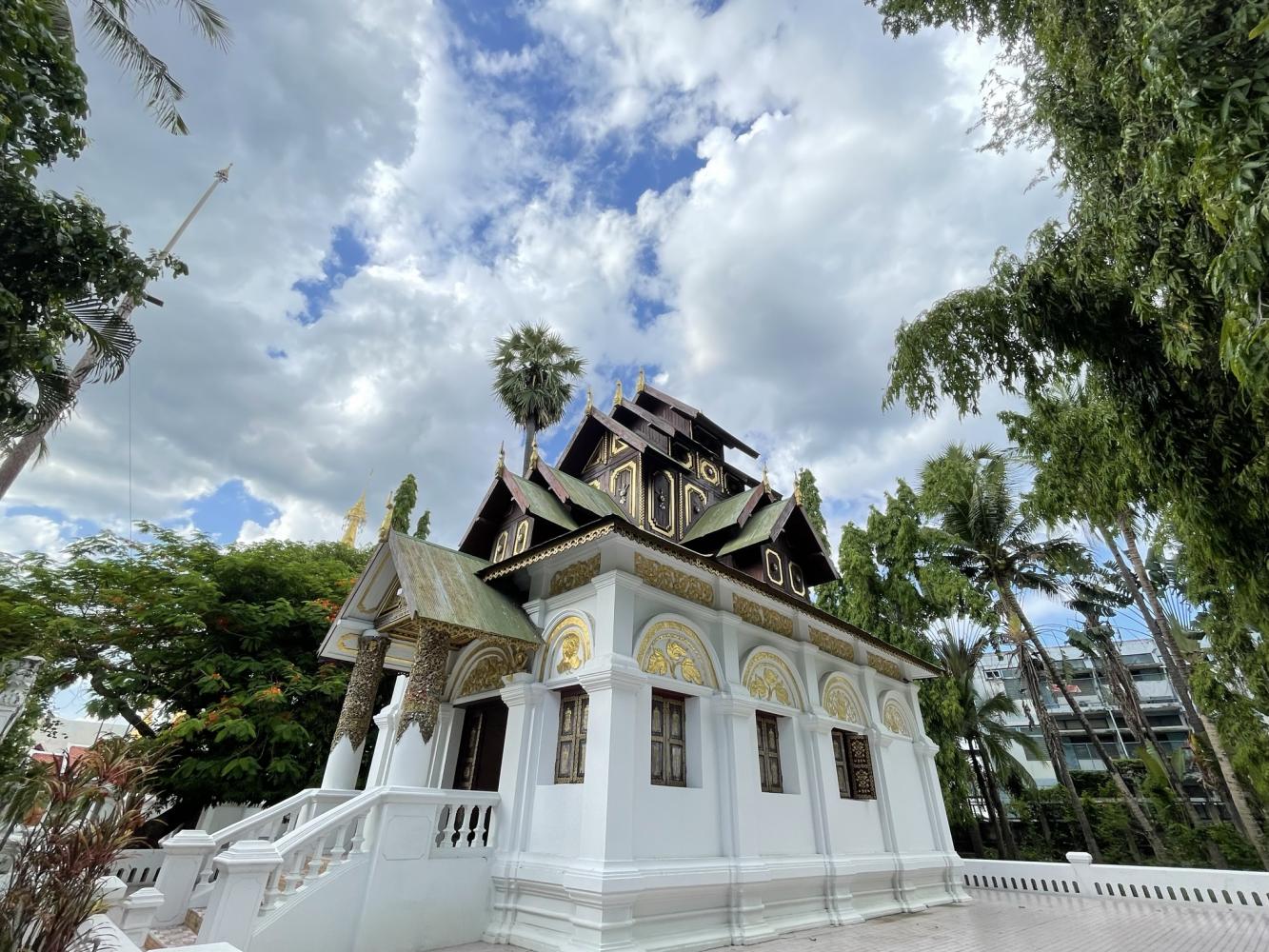 The ubosot of Wat Satsana Chotikaram features a tiered Burmese-style wood ceiling and a wood Buddha figure dressed in a ruby-studded robe.

Due to a lack of time, we enrolled in a two-hour pottery class to learn how to create a traditional Raku flower pot and a coffee mug. It's open to everyone, even if you don't know the fundamentals of art. The pottery becomes one-of-a-kind artwork when it is dipped in stain colours before being burned at 1,100 Celsius and placed in the buckets of leaves, newspaper, husk, and other plants to make different effects on its surface.

"I'm working with the National Innovation Agency and a psychologist from Lampang Hospital to create a craft therapy programme and a mental health screening exam. Threshing flours can help ease trigger fingers and tension, and producing artwork can enhance self-esteem when patients are commended. There's no need to be an artist. Here, you can let your imagination go wild," Keerati said.

Ceramic workshops range in price from 900 baht to 3,500 baht, including supplies and a meal, while the tie-dyed T-shirt sessions cost between 900 baht to 1,200 baht. Find out more details on the Suanphensri page on Facebook. 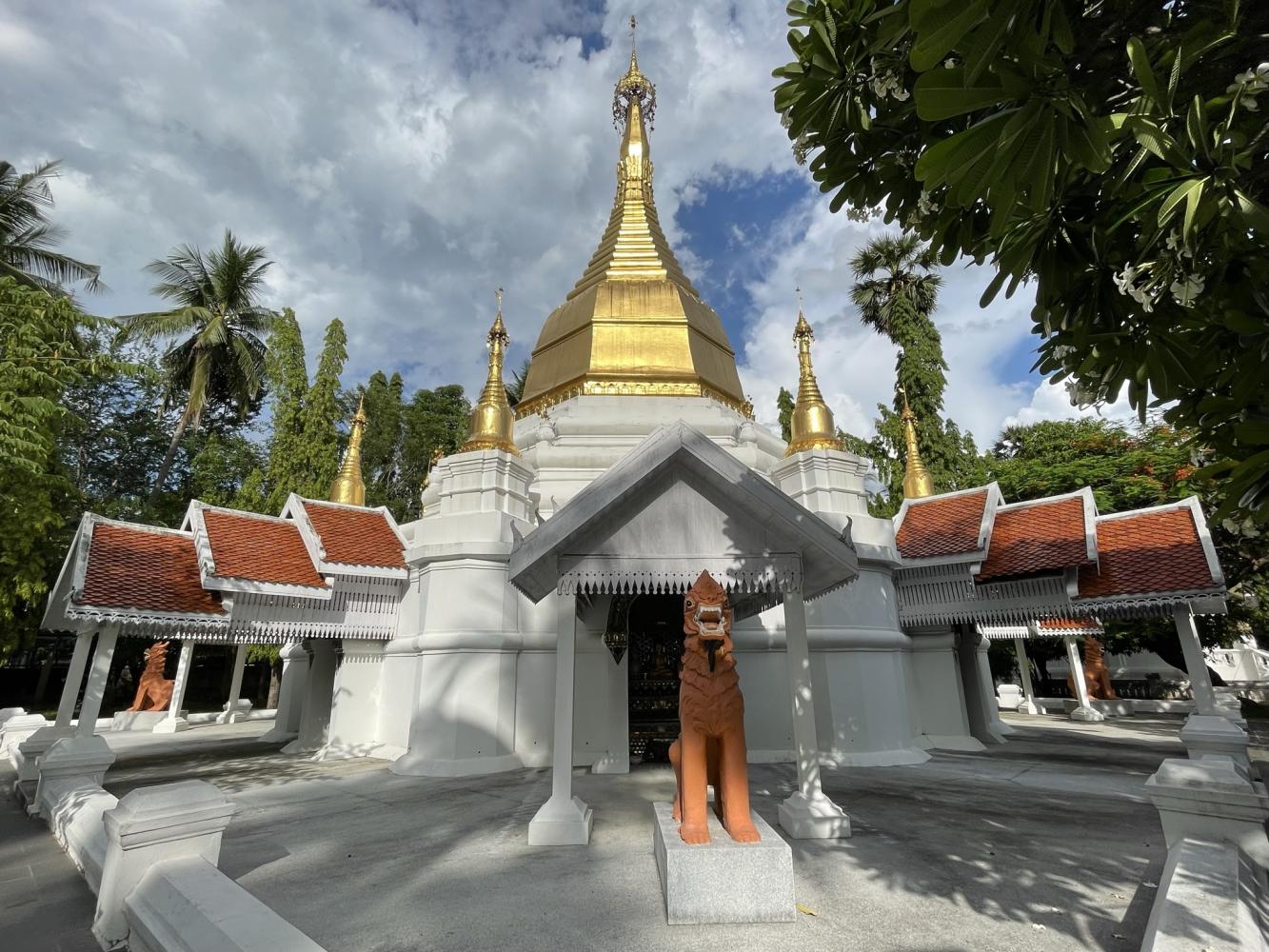 Lord Buddha's relics from Myanmar are enshrined in a gold pagoda of Wat Satsana Chotikaram. 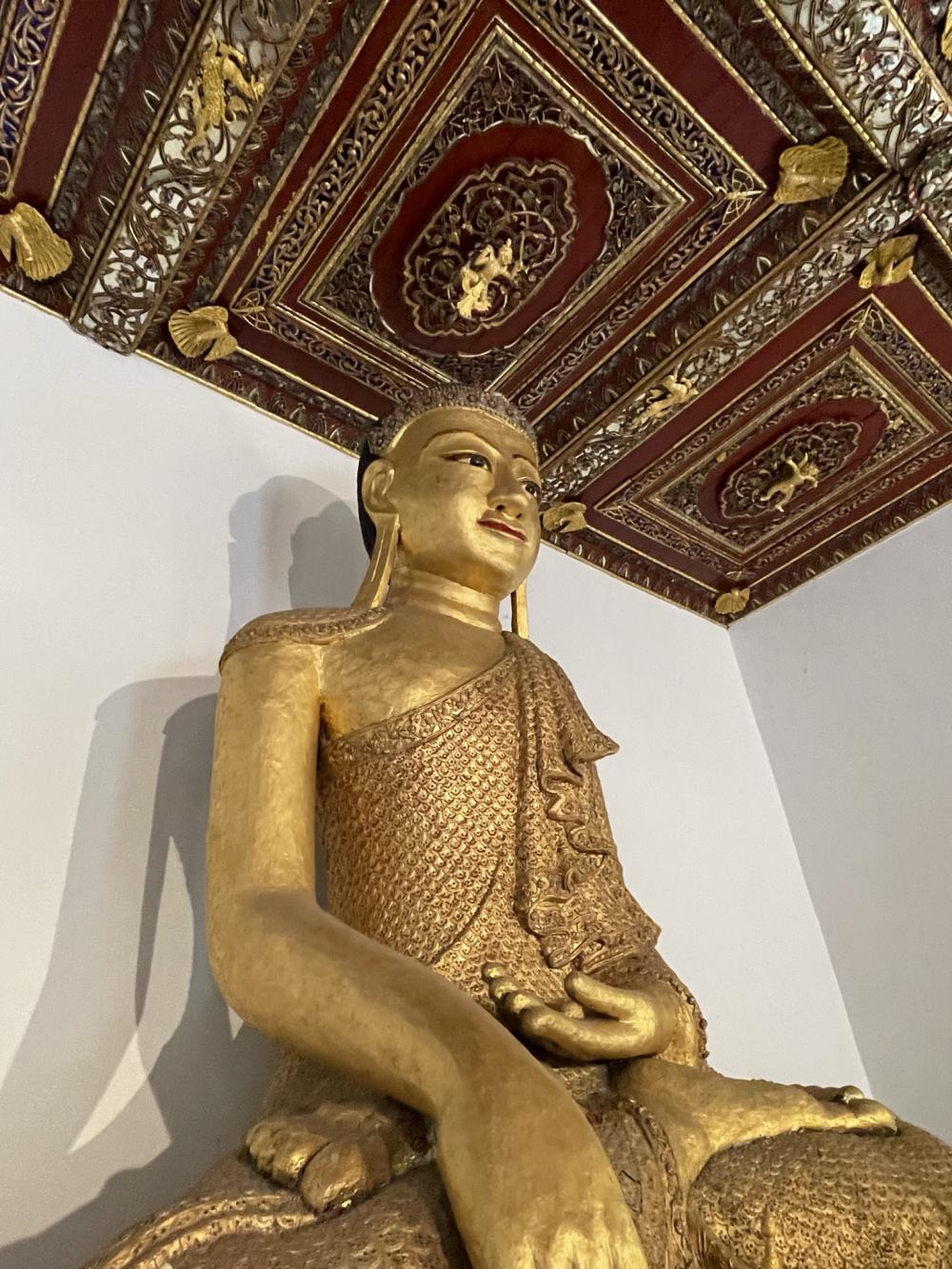 The ubosot of Wat Satsana Chotikaram features a tiered Burmese-style wood ceiling and a wooden Buddha figure dressed in a ruby-studded robe. 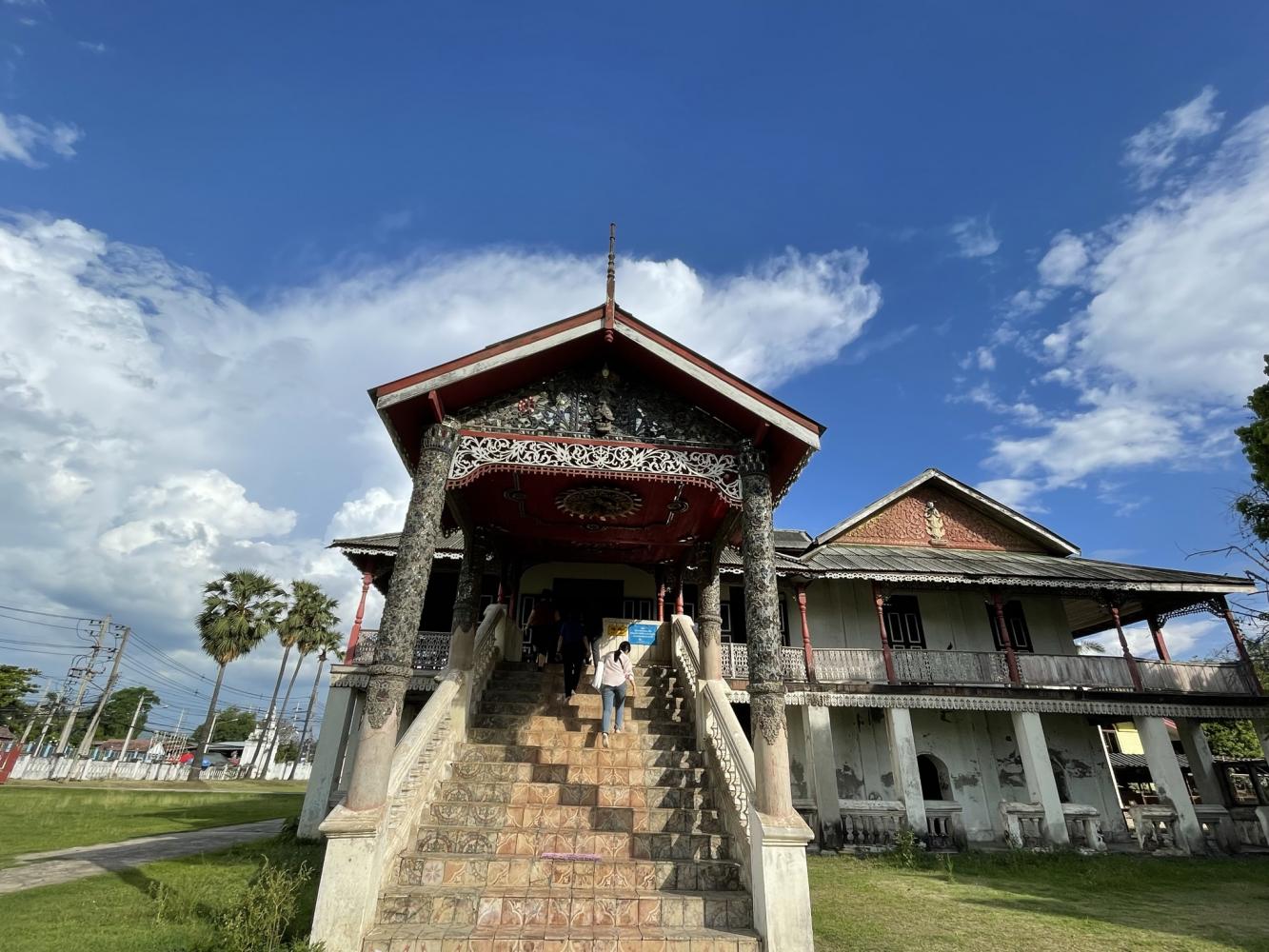 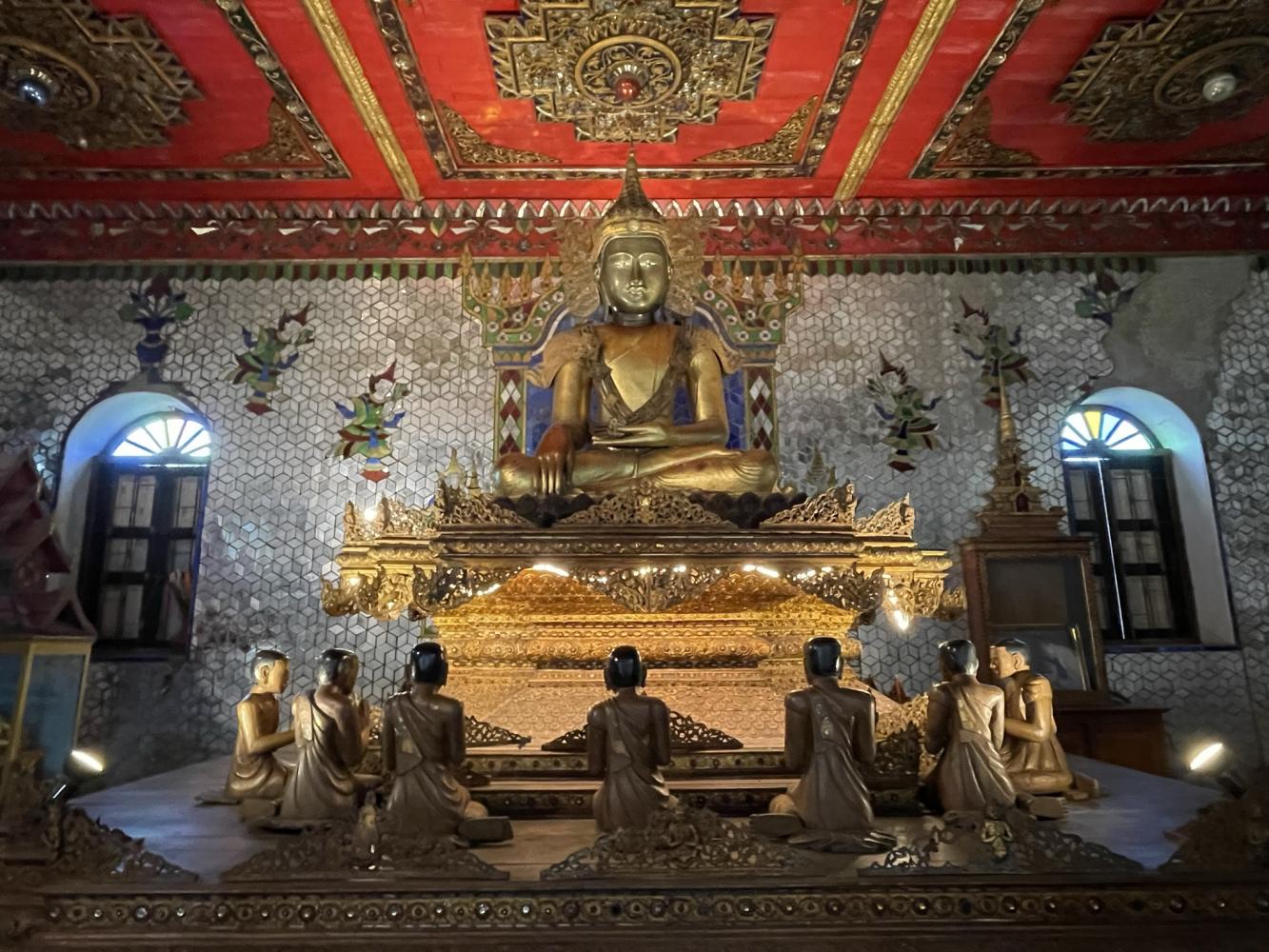 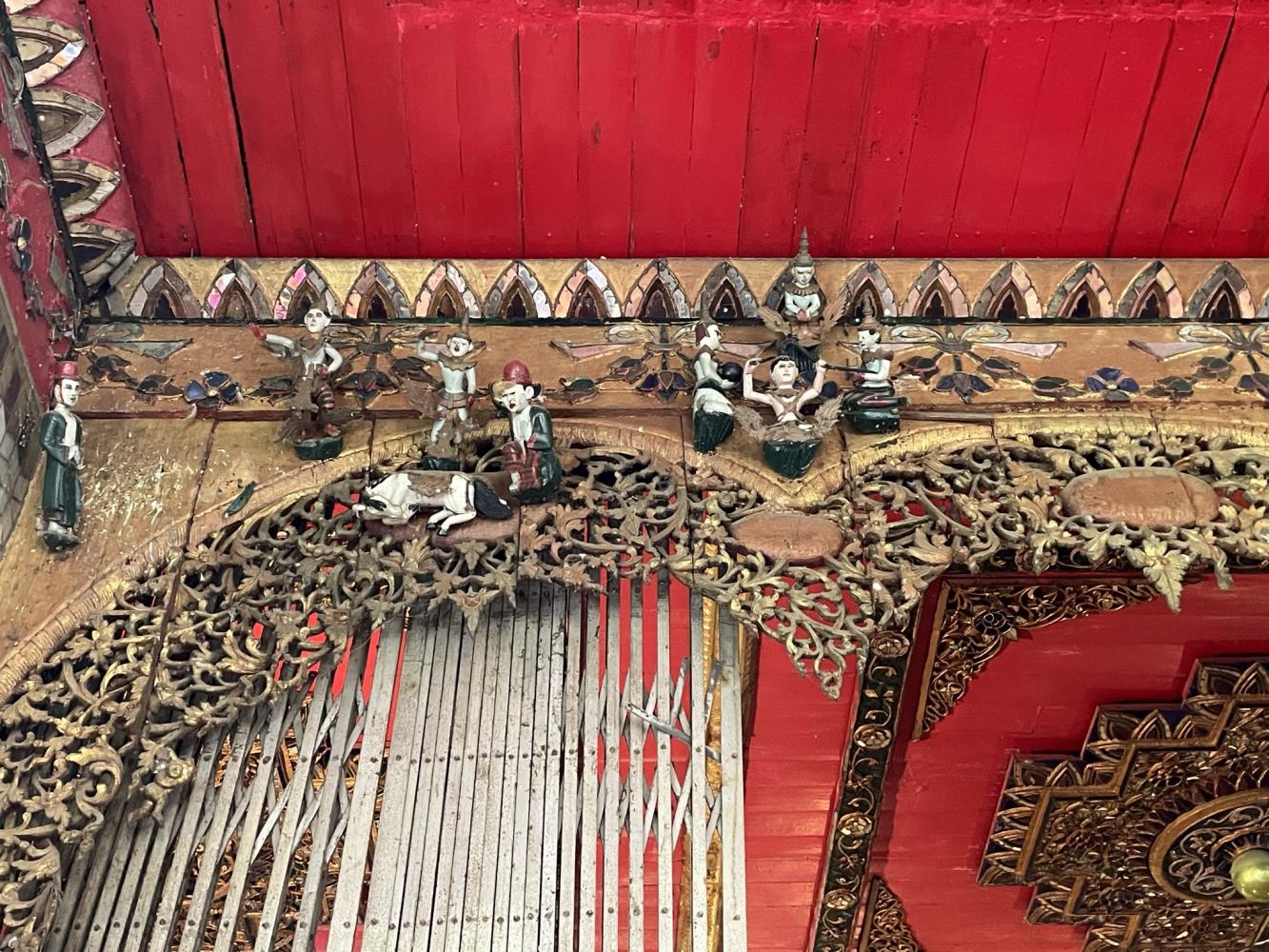 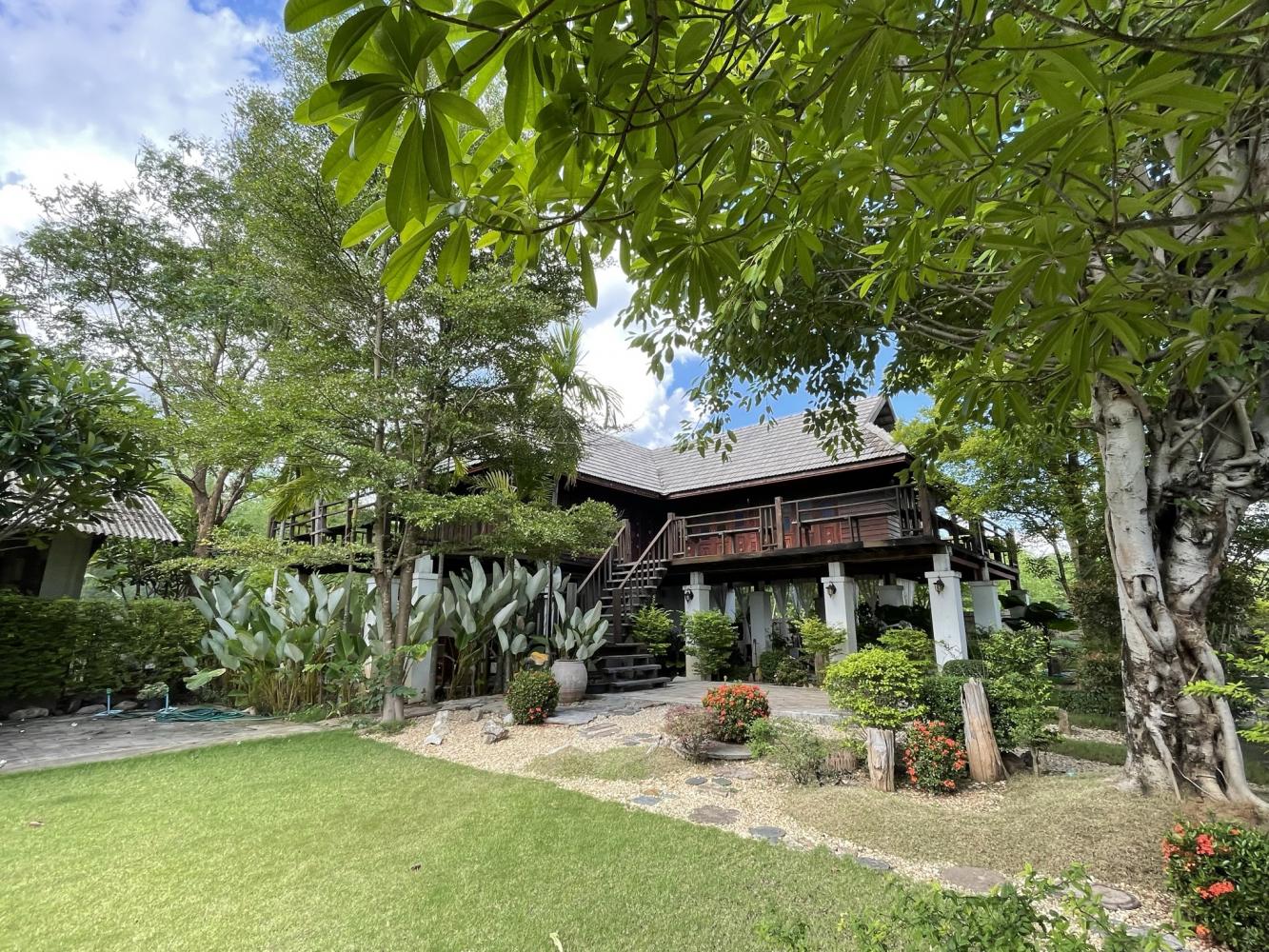 Tourists can learn how to make a Japanese Raku pottery and tie-dyed T-shirts at Suan Phen Sri. 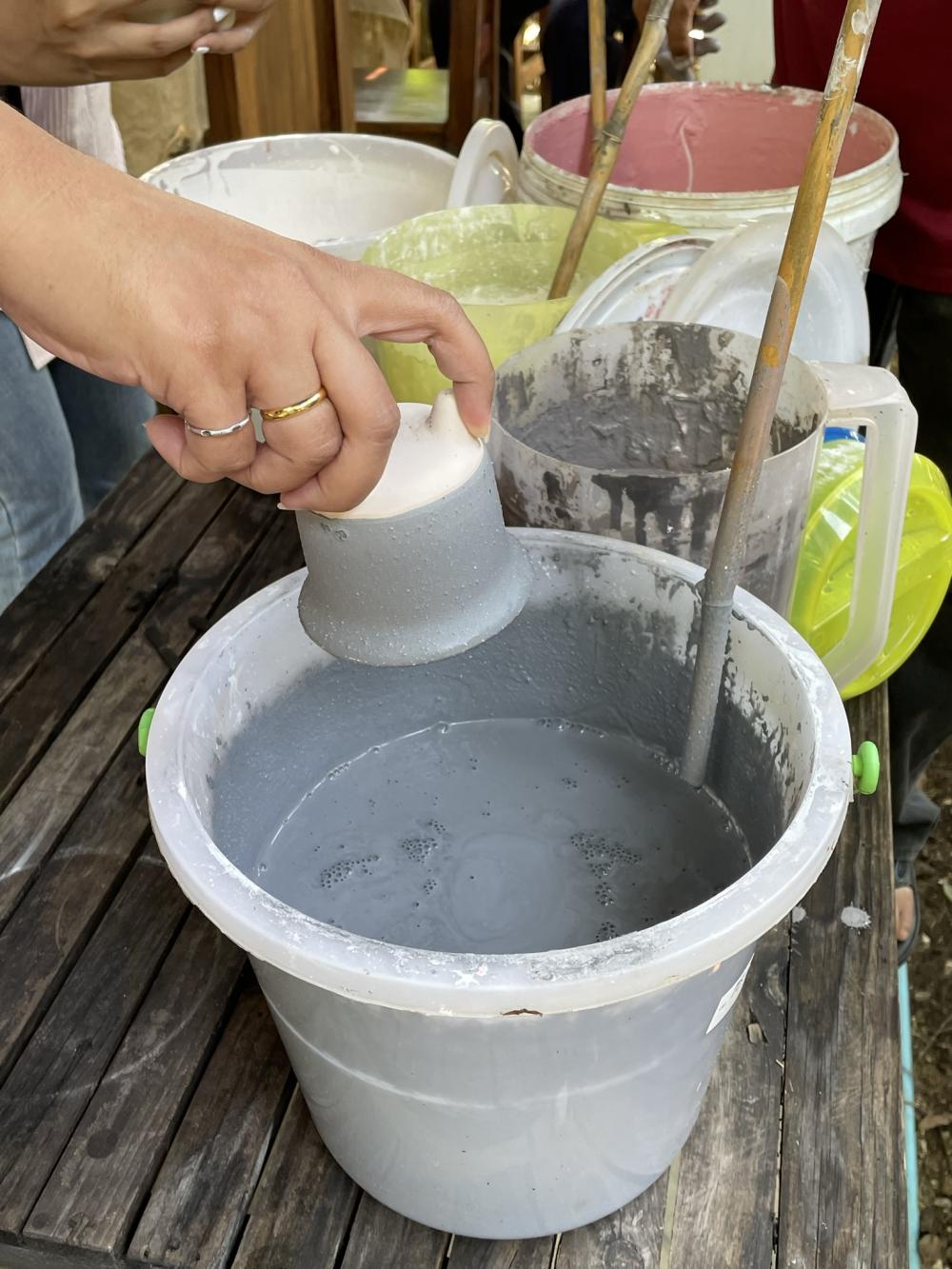 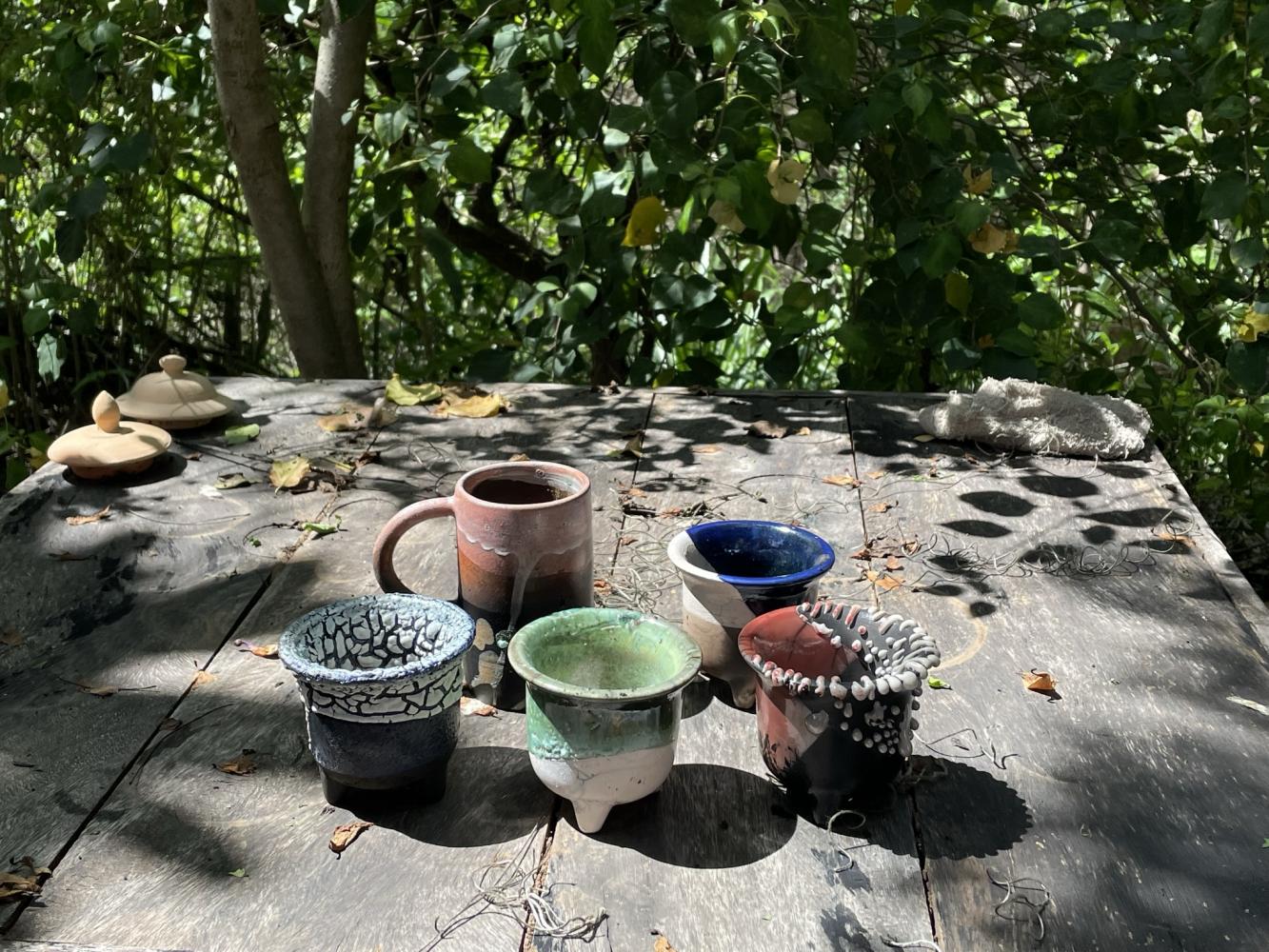 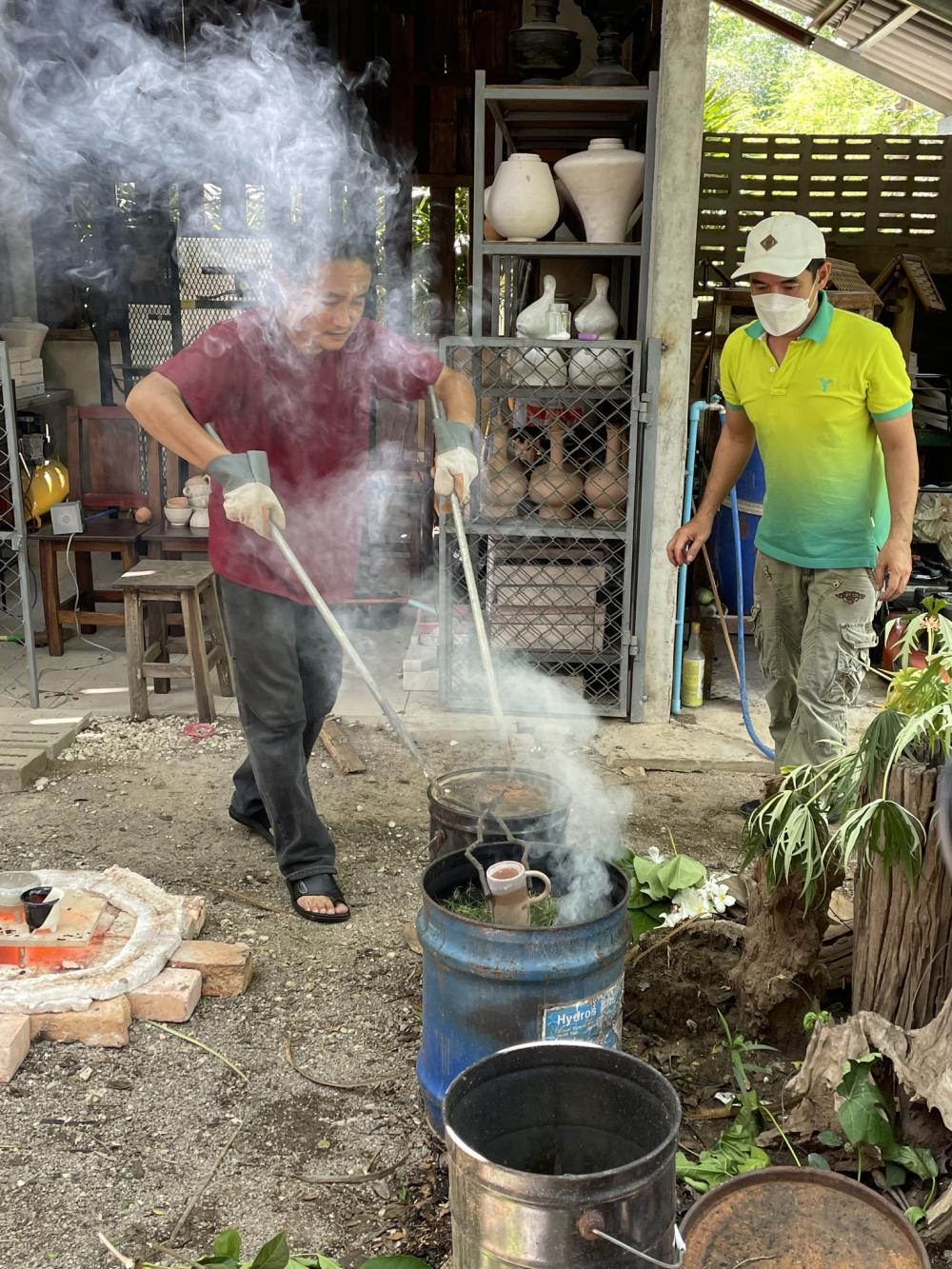 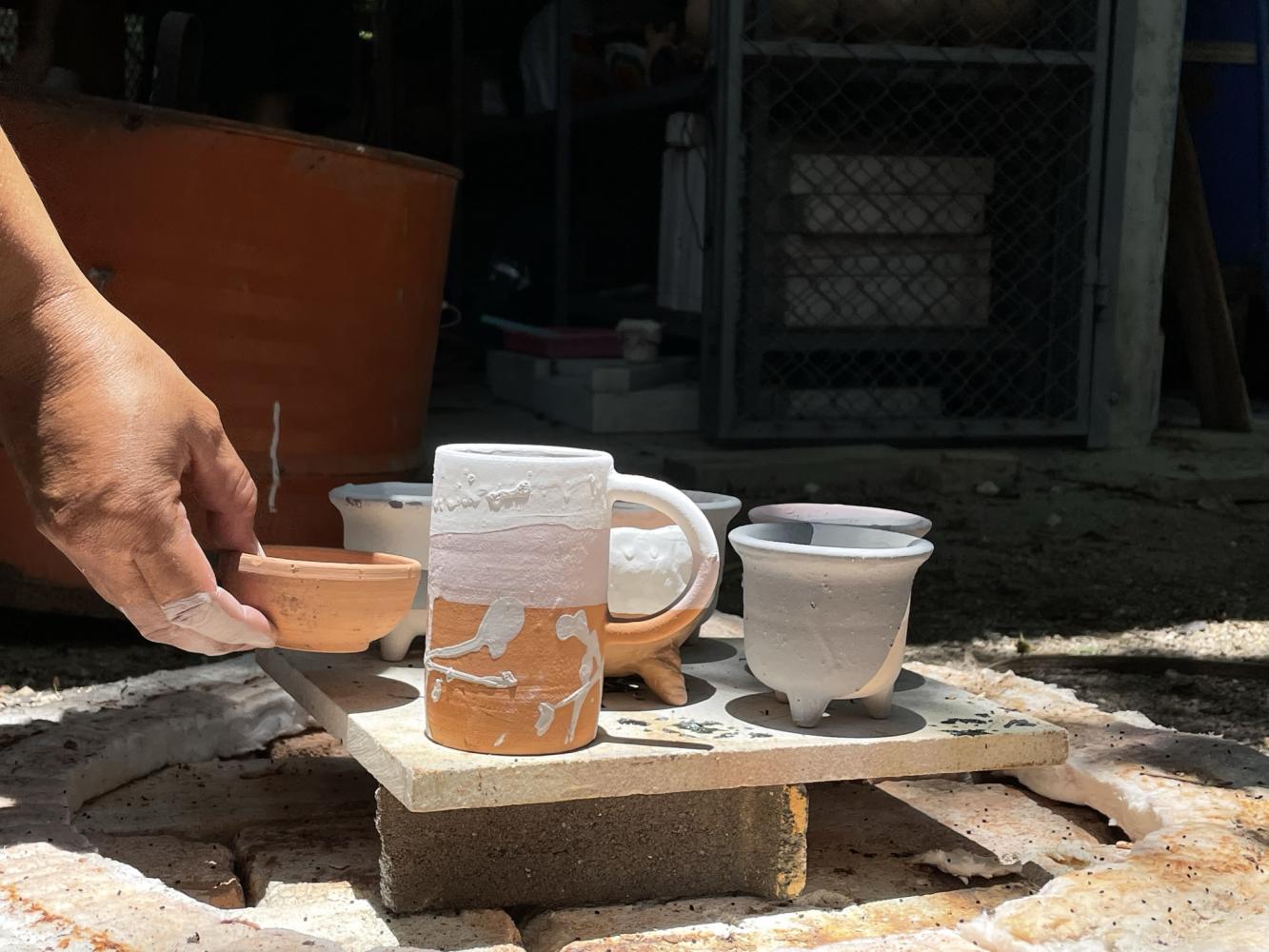 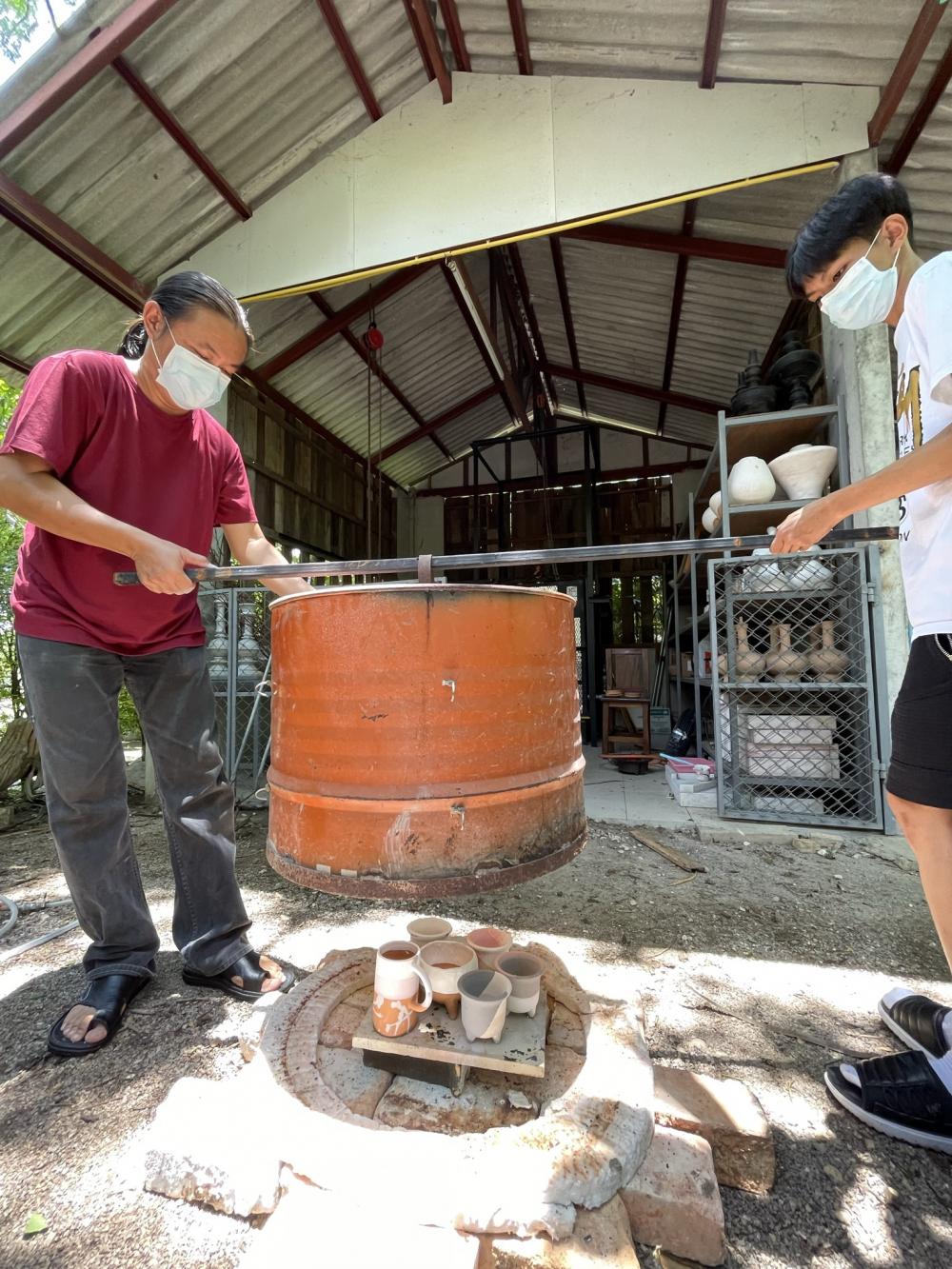