A stroll in another world
Travel

In Pathum Thani, get up close to small creatures at Mini Zoo Thanyaburi or explore the cosmos at Rama IX Museum

After Thailand's first zoological park closed in mid-2018, Dusit Zoo relocated to Pathum Thani and reopened earlier this year to serve as a new recreational attraction for families interested in learning about wildlife and biological systems. 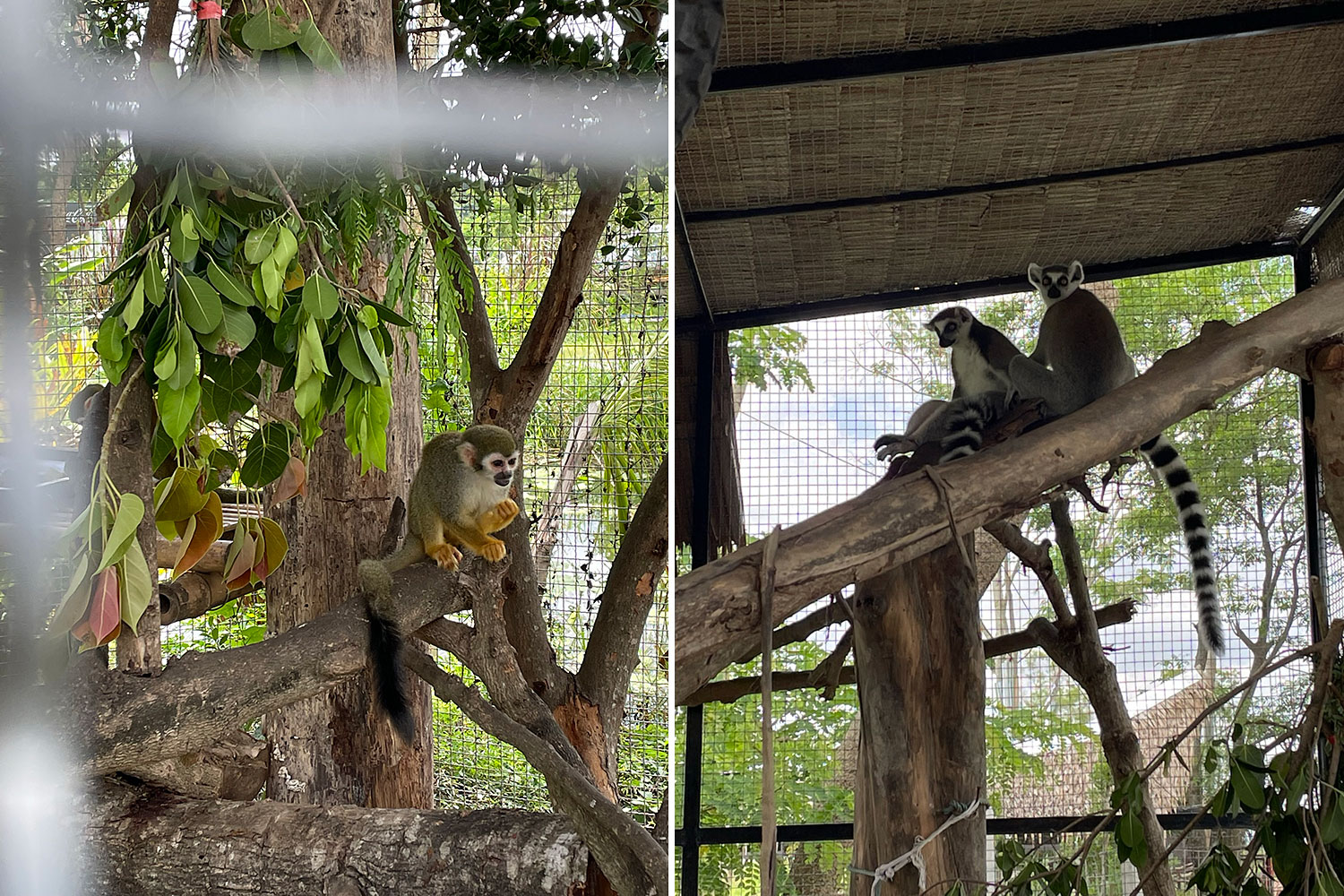 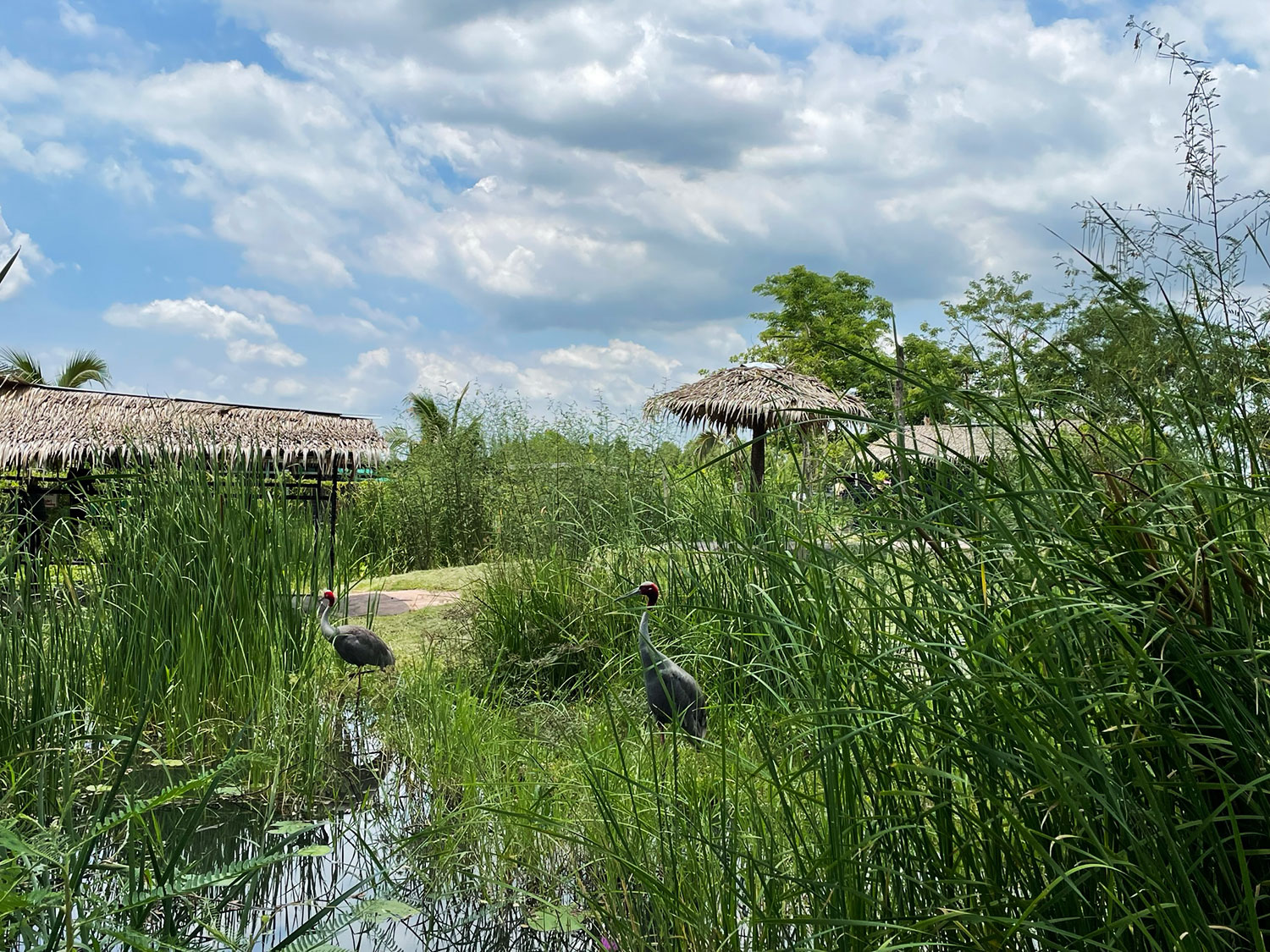 This time, it returns as the Mini Zoo Thanyaburi to underline its existence as an example of the 300 rai New Zoo Project by the Zoological Park Organization of Thailand, which is under royal patronage of His Majesty the King.

Just a 40-minute drive from Bangkok, it's nestled in a tranquil residential area and weaving through narrow lanes made me realise that, in comparison to its previous location in the heart of the capital, getting here will be a burden for people without a car.

The zoo spans 4 rai and is designed to resemble a tropical rainforest and a swamp in order to fit in with the surrounding environment while showcasing seven different kinds of protected animals from across the world. With a paucity of space, it highlights small creatures that can survive in hot temperatures and during the rainy season, allowing visitors to learn about wildlife conservation.

At the entrance, a pair of eastern sarus cranes stand peacefully in a lush marsh, acting as receptionists to greet tourists. They are one of Thailand's 19 protected creatures and can be found in high-altitude wetlands and paddy fields. They usually live in pairs and may live up to 50 years.

Children gather a few steps away at an African spurred tortoise pond to observe the tortoise mate until March, as well as after the rainy season from September to November. They may live up to 100 years in hot, arid conditions ranging from desert margins to dry savannah, where permanent water supplies are typically scarce. Succulent plants like prickly pear cactus, curve leaf yucca, and saguaro cactus provide them with food and a lot of water. 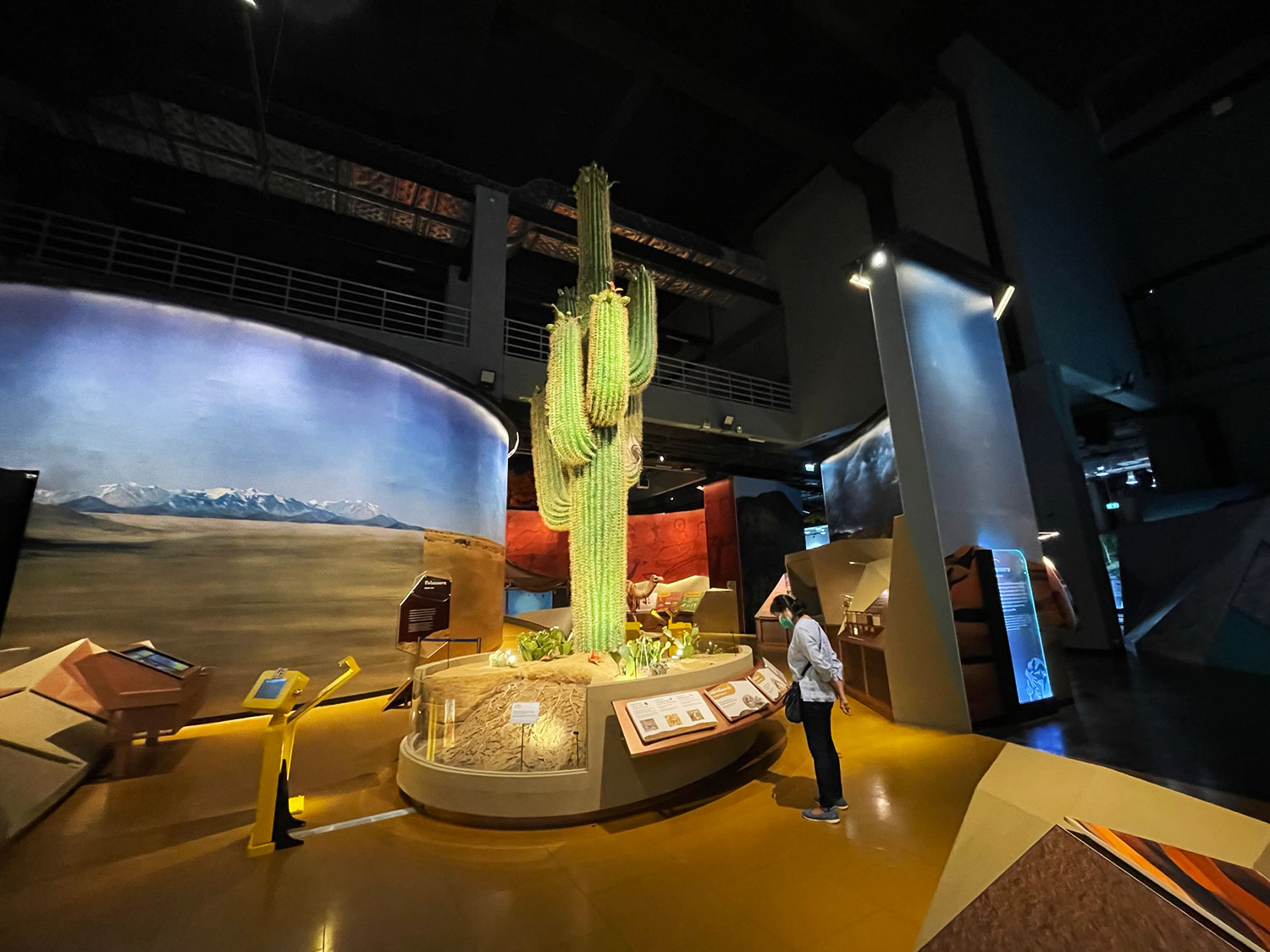 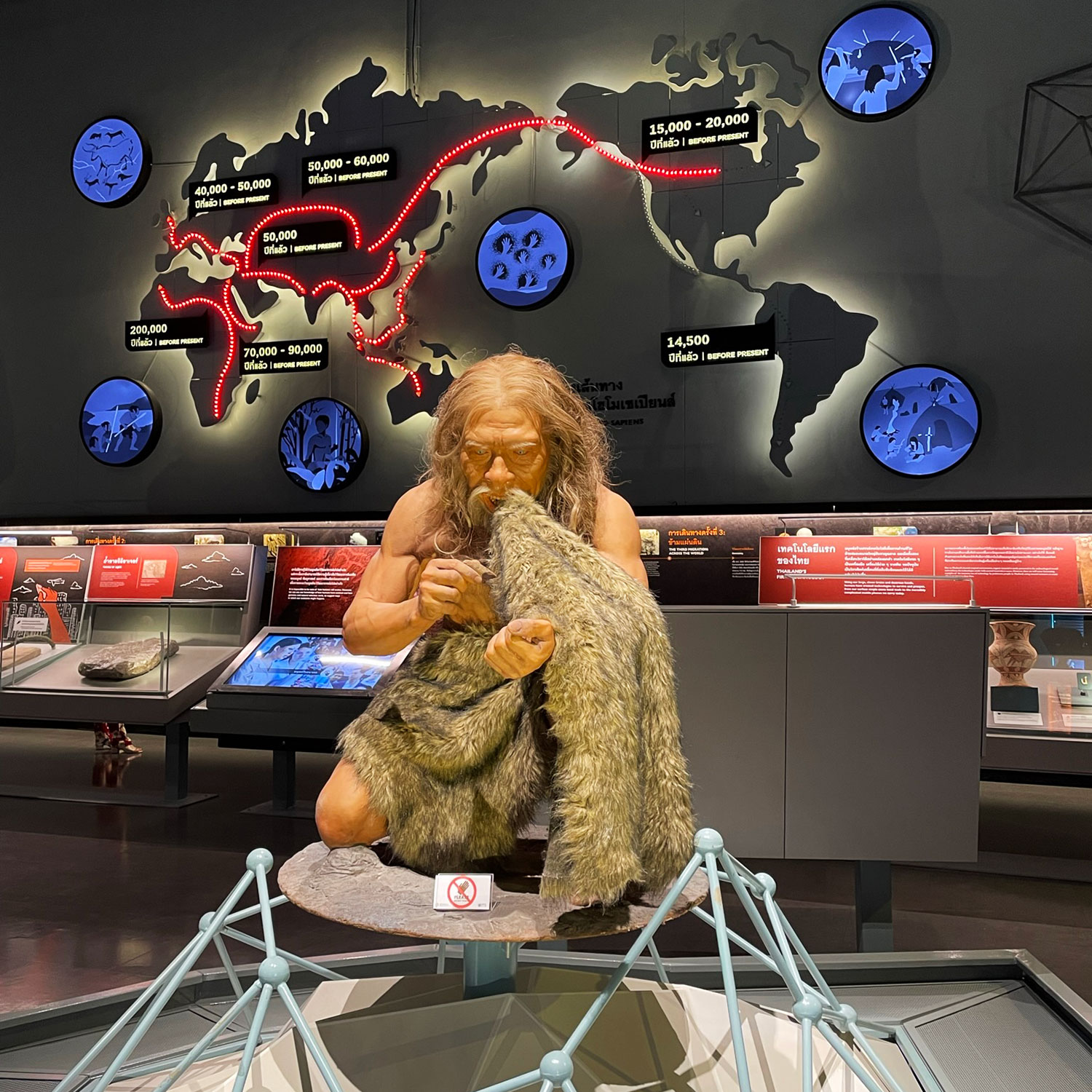 We're all familiar with the yellow-headed temple turtle, yet kids still like seeing them wander about. They can survive in brackish water, and their favourite foods are water lily leaves, tubers and floating plants.

Visitors can go across a bamboo bridge to the park's centre, where we see the northern raccoon family and imagine them exploring their home in the grassland or rainforest.

The common squirrel monkey waits nearby, inviting people to partake in a banquet of fresh fruits, leaves, seeds and herbs.

Visitors can also meet and greet a group of lovely capybara while they graze in a neighbouring area, which replicates a savannah and rainforest in Central and South America. They may live for up to 12 years and prefer to congregate around a pond, river or lake.

Tourists can also relax in a boat-like pavilion after a sightseeing tour and enjoy verdant sceneries evocative of a kuay tiew ruea shop. Also on display is the New Zoo Project exhibition depicting what will be found in the future such as a wide savannah grassland, red rock arena, wetland reserve, Congo rainforest and Amazon swamp, where more than 300 kinds of indigenous and exotic animals will coexist under one roof.

The zoo plans to extend its property to 6 rai next month in order to accommodate 12 more animal species. Giraffes are a popular attraction among children, but not a good fit for the limited space. Instead, tourists are more likely to come across a herd of deer and other small creatures.

Only a 10km drive from the zoo to Rangsit Klong 5, Rama IX Museum was the next stop, where we were able to learn about Thailand's ecological diversity. It's the newest addition to the National Science Museum (NSM) complex, situated in Technopolis, Pathum Thani. 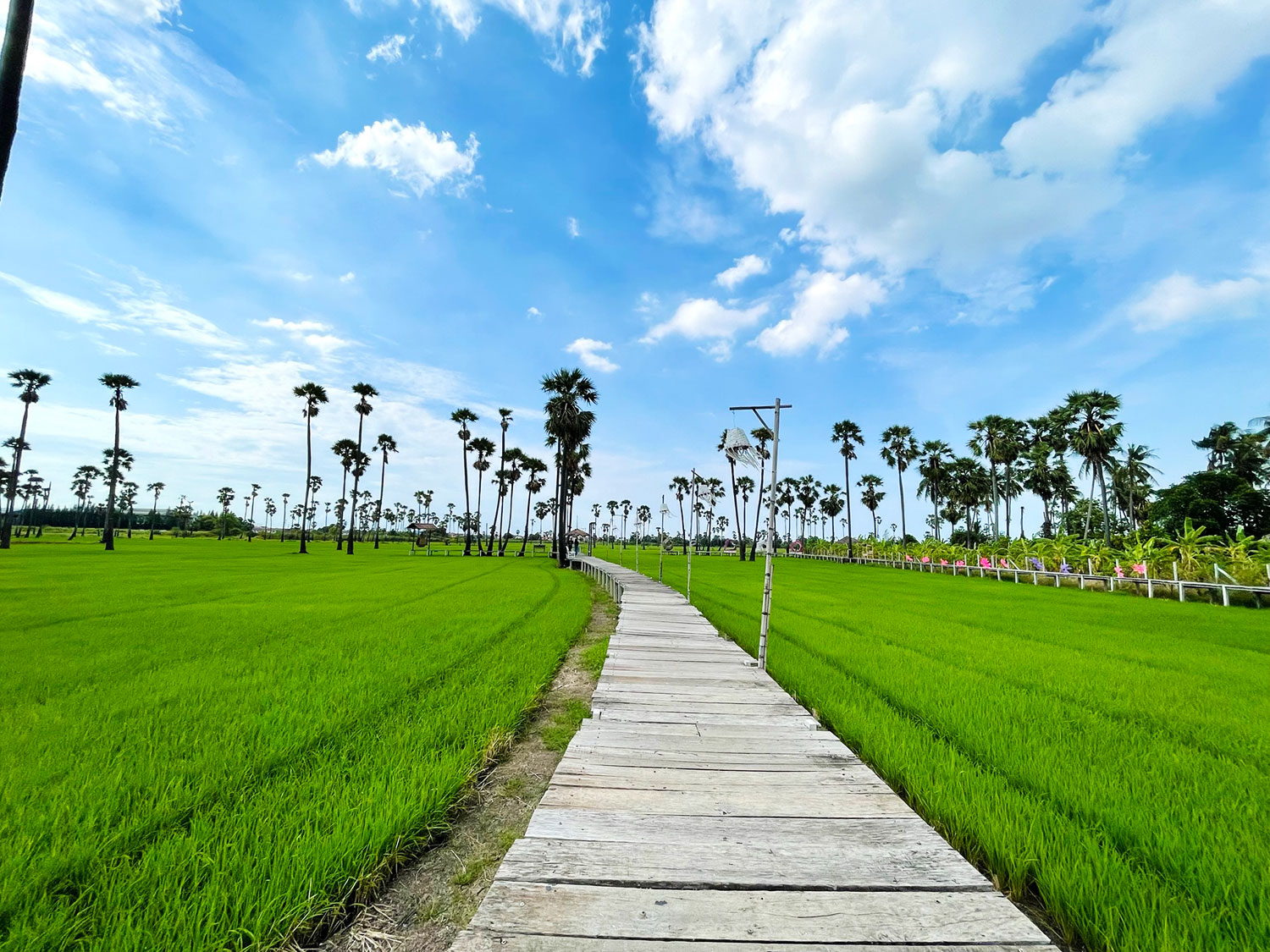 The Aileen Cafe offers a striking view of a vast rice field and palm plantation.

The Ministry of Science and Technology has invested 1.6 billion baht on this 27,000m² museum, which uses multimedia presentations to provide interactive learning experiences and enhance science literacy among Thais.

As a homage to the late King Bhumibol Adulyadej The Great's contributions to technology and science, the exhibition is divided into three themes. The journey begins passing through the magical gateway where we can imagine we're boarding a space shuttle at the Our Home zone to explore the cosmos.

To trace Earth's genesis, we can immerse ourselves in the Big Bang event and the colourful "Wall Of Life" is situated to demonstrate how over 100 different organisms, ranging from bacteria, fungus and protists to archaea, plants and animals, evolved from a single cell to more complex organisms in order to survive in their environment.

Meanwhile, the life-size replicas of Thai dinosaurs -- Phuwiangosaurus sirindhornae and Siamotyrannus isanensis -- roar loudly to remind visitors of their arrival.

The Human Odyssey gallery is just next door, and visitors can play palaeontologists and trace our ancestors' footsteps through a collection of ancient human models such as Australopithecus, Homo sapiens, Homo habilis and Homo neanderthalensis. A display of old farming equipment, pottery, and clothing depict the progress of early humanity.

Under the theme of Our Life, the chilly South Pole wind simulator transports tourists to Antarctica, the home of adelie penguins, south polar skua and seals, which has been damaged by global warming. Then, visitors can stroll along a long bridge against a backdrop of aurora to experience the immense Taiga forest, the rolling plain of Trudra, the desert, Lake Baikal and Thailand's forest, all of which have been affected by climate change and human activity.

The Our King zone demonstrates how King Bhumibol integrated local wisdom, science and modern management principles for sustainable living. It also has a massive indoor swamp forest with a waterfall, where guests can climb to the vantage point and gaze out over lush surroundings. 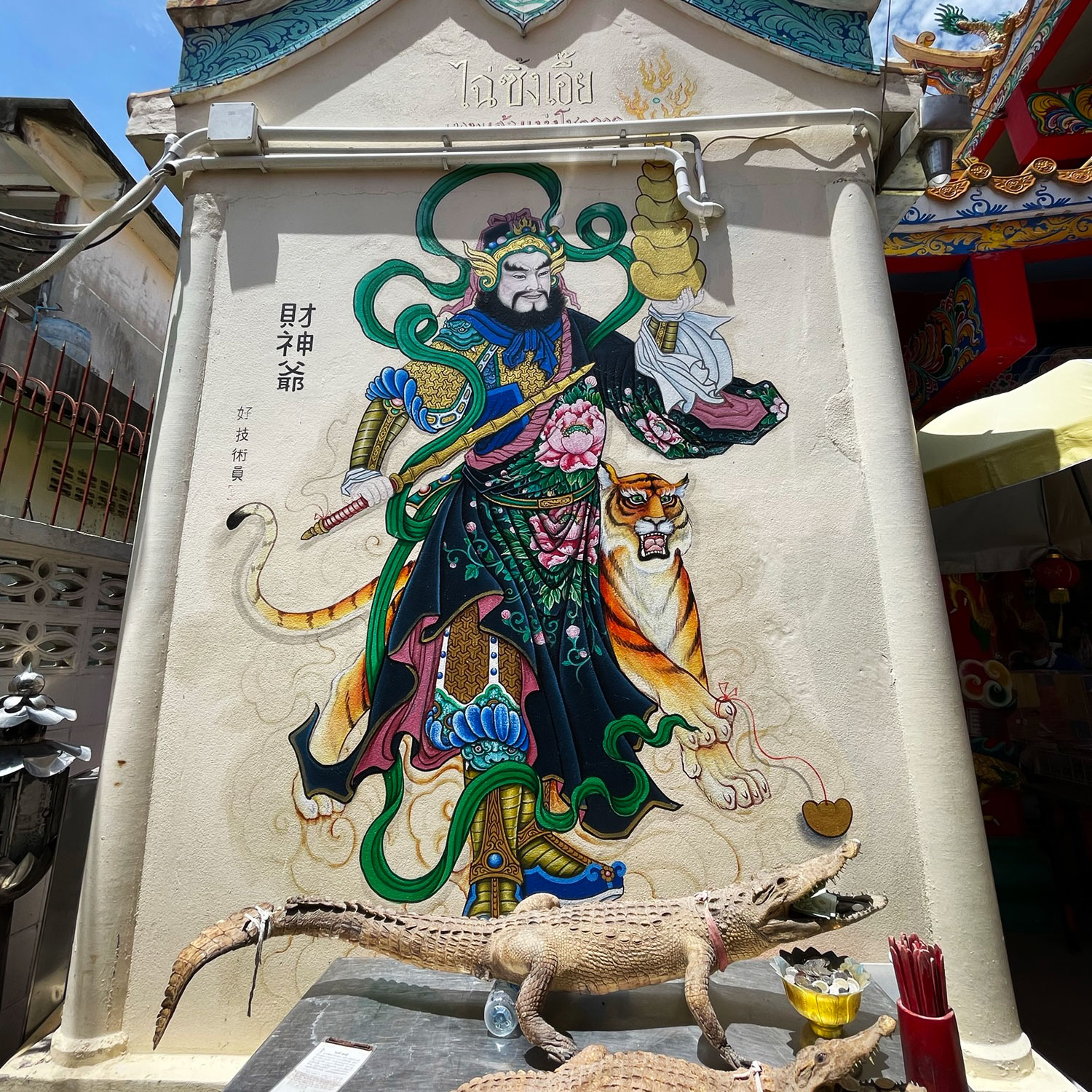 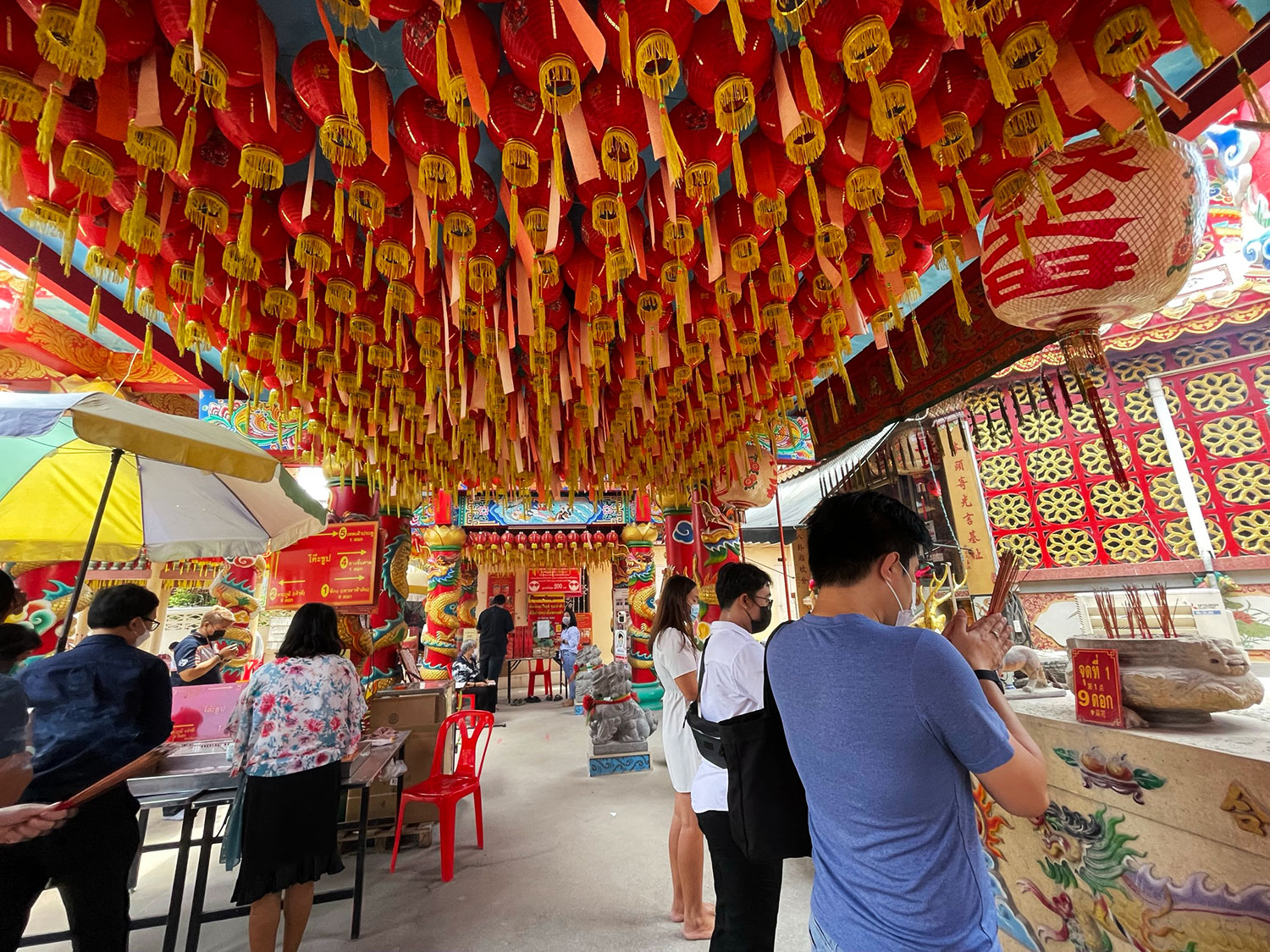 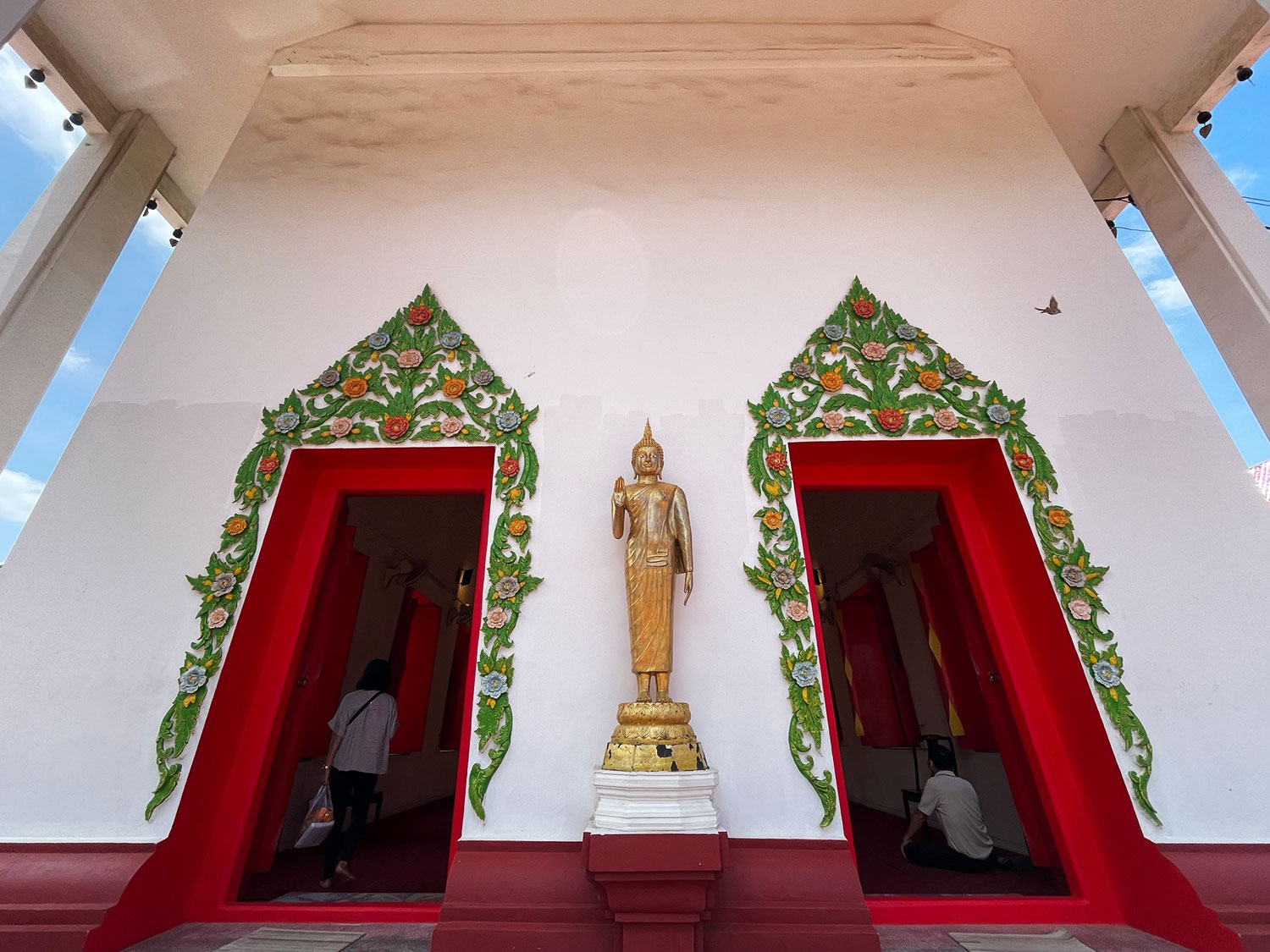 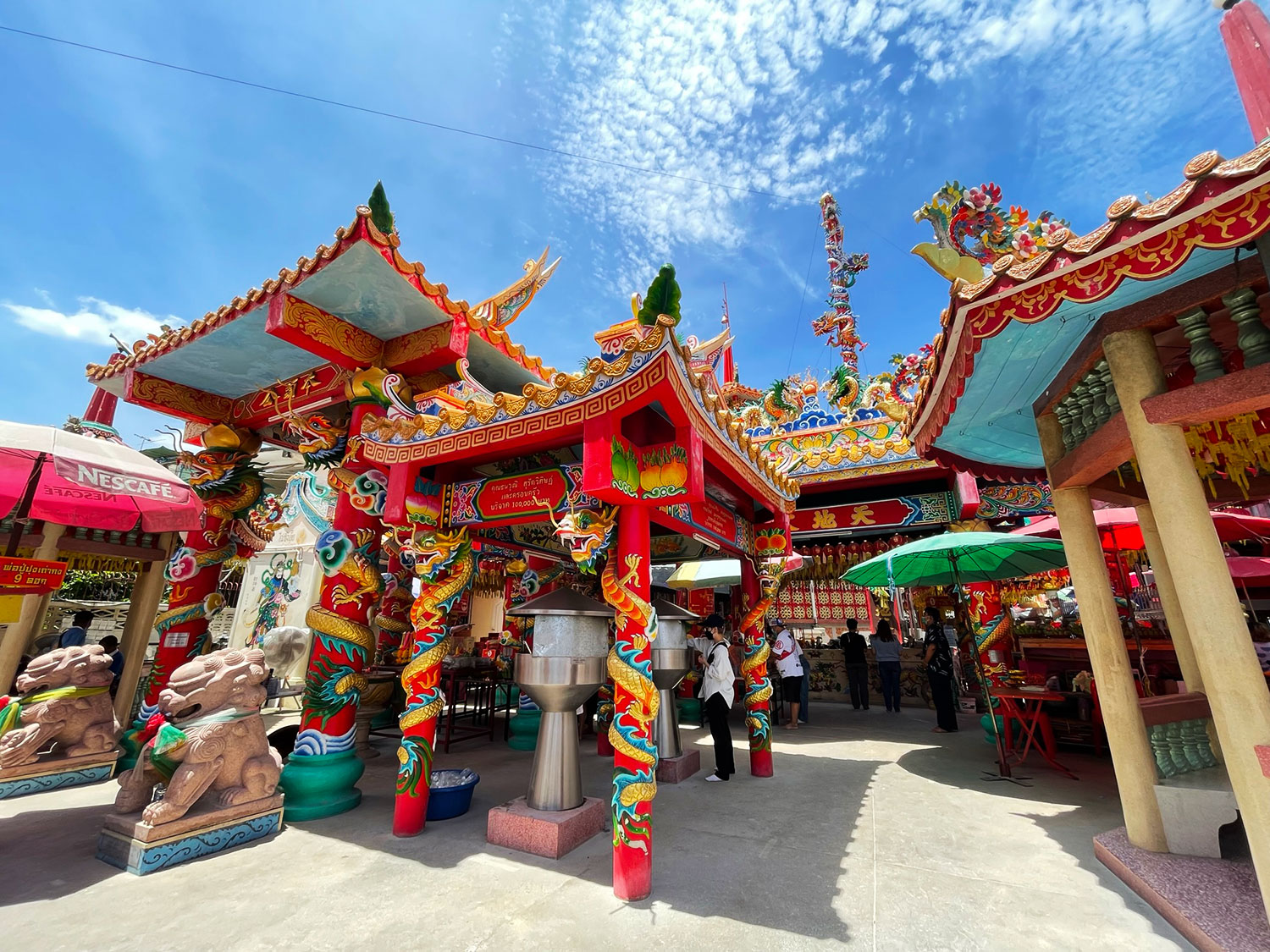 Wat San Chao was built in the Ayutthaya period.

After leaving the museum for the Sam Khok district, I arrived at the Wat San Chao waterside market in the afternoon in time for a late lunch. The best sellers have always been yentafo (pink noodle soup) and khanom kui chai (steamed Chinese chive cakes with super light and thin textures). Traditional Thai sweets such as ta koh (coconut custard filled with taro or sago), piak poon (pandan coconut milk pudding), khanom tan (toddy palm cake) and khanom chan (steamed layered cake) are all terrific choices for a pick-me-up.

Sitting on the banks of the Chao Phraya River, this historic temple was erected in the Ayutthaya period and subsequently restored during the reign of King Rama III. The ubosot enshrines a 232-year-old Ayutthaya-style statue of Phra Phuttarattana Maha Phrom who has red lips, large ears and thorny hair, while a gable is adorned with pastel stuccos of flowers and peacock on a gable.

The temple also has an ancient Chinese shrine that was built in the reign of King Narai the Great. According to legend, Chao Noi Maha Phrom specialised in black magic and sailed from Chiang Mai to the mouth of Khlong Chiang Rak, where the prince tested the ability of a Mon monk named Ru. Finally, the prince constructed a wood shrine to honour the monk and drank sacred water in this area to pray for a safe trip.

A short drive from Wat San Chao, a group of Mon migrants moved from Mottama to Siam and King Narai allowed them to settle in the small town of Sam Khok. They refurbished Wat Sing, which was erected in the reign of King Phra Borom Trailokkanat and abandoned following the first fall of Ayutthaya. 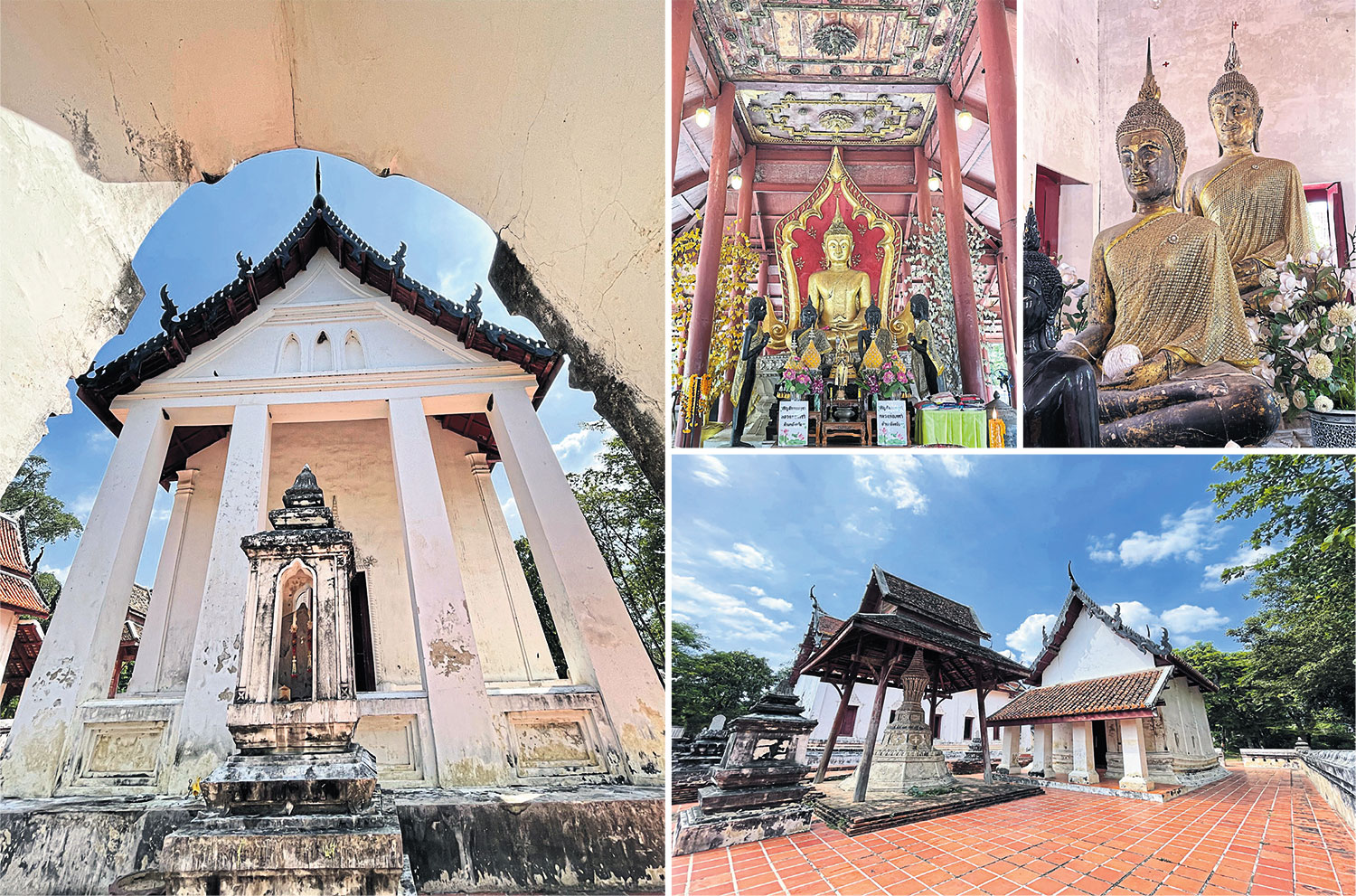 The Wat San Chao Market is a good spot to learn about Pathum Thani’s cuisine.

Wat Sing is a reminder of the Ayutthaya kingdom’s glory days.

The Fine Arts Department added this 453-year-old temple to the list of historical monuments in 1992. It has an Ayutthaya-style ubosot that is encircled by low walls and has a carved wood gable with mirrors. Inside, it houses an old Ayutthaya-style statue of Luang Pho Phutta Rattanamuni, who has a smiling oval face, a prominent nose, huge ears and a slender physique, in a posture of subduing Mara.

The Ayutthaya-style vihan stands on a junk-like platform, with gilt teak window frames, to take pilgrims through a cycle of birth and death. Inside, visitors can pay respect to a venerable Ayutthaya-style statue of Luang Pho Phutta Sirimasaen made from red sandstone. Also on view is former abbot Luang Pho Phraya Krai's towering urn, which is adorned with flower-like stuccos in a mixture of Mon and Thai-style art.

My journey came to a close at the Aileen Cafe, where I sipped refreshing drinks while overlooking a lush paddy field and toddy palm plantation. This has become a popular picturesque sunset viewpoint.