In Uttaradit's Laplae district, the most delicious varieties of the king of fruits are the only business in town

Like many towns in Thailand's vast northern countryside, Laplae district is shrouded in myths and legends. One myth concerns dishonest men being denied entry due to their deceitful ways. Honesty is a prized characteristic here and those who lie are believed to be unable to ever locate the town.

It's easy to understand a traveller's struggle in finding Laplae, a town nestled tightly within the steep, rugged mountains of the northwest corner of Uttaradit province. The name itself means "hidden from sight", which is self-explanatory should you try to find it. Of the town's two major roads, one dead-ends at the base of one mountain, while the other wraps up and around before ending atop another. The town lacks major accommodation, there are no buses from the provincial capital to the town, and it's not easy to find transportation if arriving in Uttaradit by train or bus. Most businesses close by 5pm, and everything closes by eight.

So why would anyone come here? The answer is simple. Laplae is a major producer of one of Thailand's most precious resources -- the durian. And not just any durian. The town is home to arguably the two most delicious and among the most expensive and sought-after durians -- Long Laplae and Lin Laplae.

These two spiky, smelly fruits are seen locally as companions and not competitors, often growing side by side in the dense hills and sold side by side in local markets. Trying to pin down a local resident on which one tastes better is as fruitful as carrying coals to Newcastle. These durians are this agricultural town's signature crop, and nearly every resident is connected to both in some way. If the durian is the king of fruits then in this part of the world, Long and Lin Laplae are the kings of durians. 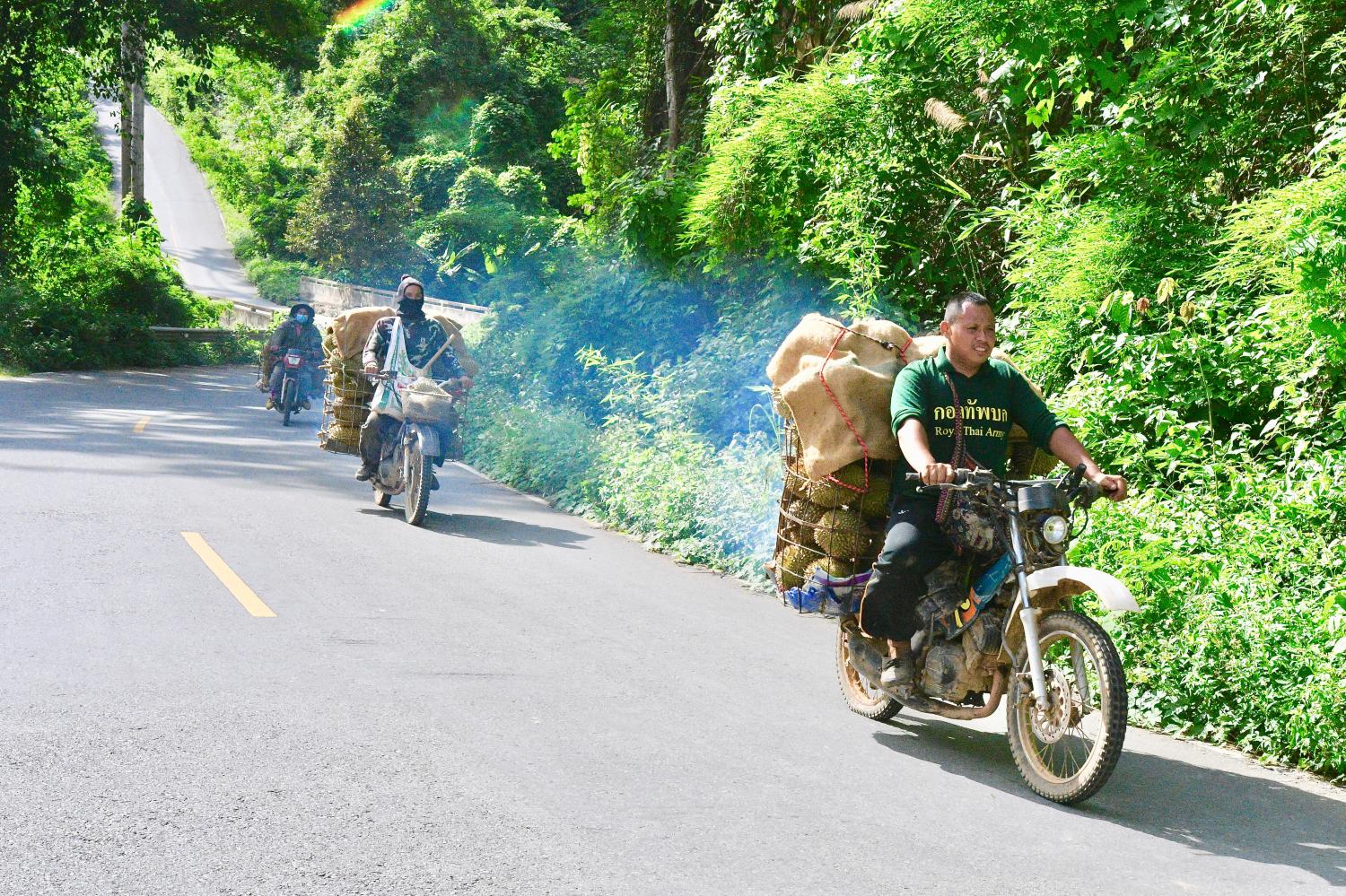 Farmers leave the forest at the end of the work day.

Both durians offer similar taste profiles. Lin Laplae has a hint of a savoury side that softens its sweetness, giving it a pleasant and delicate taste. Long Laplae offers no such pretences; it's pure sweetness, often deliriously so. Lin is known for its five-grooved husk and flat-shaped fruit with a very small or nonexistent seed. Long has a more round shape and its fruit is more thick and meaty.

The origins of Long Laplae date to 1942 when villagers Lom and Long Uppara planted seeds of a durian species native to Laplae. As the trees grew, Lom noticed one tree produced a durian that looked and tasted much different from the others, explained Kanyawee Sirikarnjanarak, a local historian and restaurant owner, who founded and operates a museum and learning centre dedicated to preserving Laplae's history and culture.

"At the time he didn't understand what he had. He would bundle this new durian up with the other local species and sell it for next to nothing," she told Life. For decades the durian remained unnamed and was enjoyed only by local residents. "It was our delicious little secret," she said.

Perhaps the watershed moment of Laplae's now 4.1 billion baht annual durian industry came in 1977, when the province's agriculture department initiated a contest for local farmers to develop a durian that met strict requirements on density, texture, colour, seed size, life span and sweetness. By this time, Laplae's higher elevation and windy, temperate climate were renowned countrywide for providing the perfect conditions for cultivating durian. Lin Punlad, a local farmer who created the durian that bears his name, co-won the contest with the Long family. Both families were awarded 1,000 baht and the support of the agricultural department to further develop their creations and the two local legends were born and named.

Kriangkrai Kanongdechachart, a retired official in Laplae's agriculture department who officiated the 1977 contest, easily recalls the first time he tasted the new species. "I thought, 'Wow'. It melted in my mouth like butter. I was grateful to know it was not wasted time to find these durians," he said. 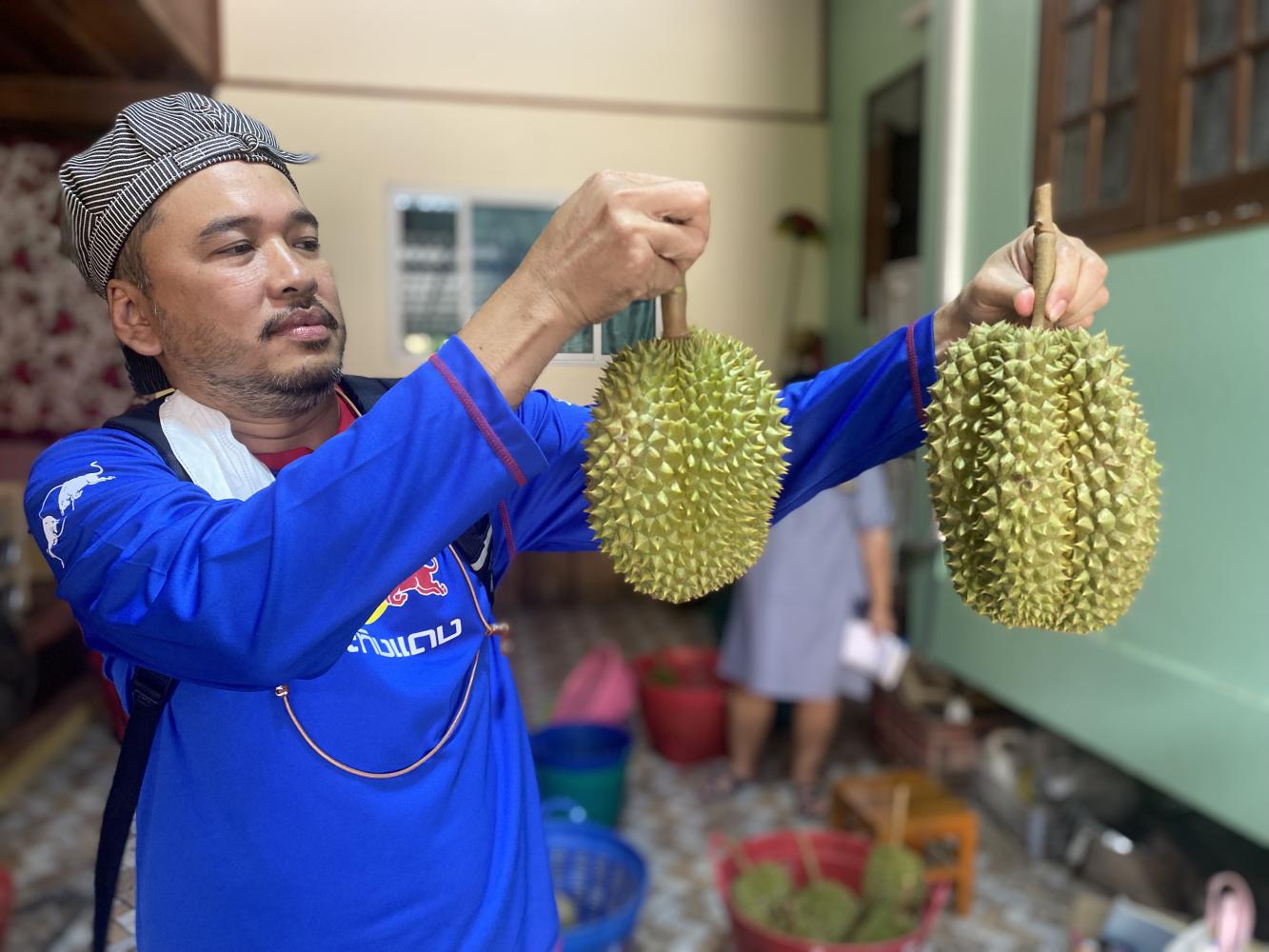 Last year, the wholesale price of Lin Laplae averaged 450 baht per kilogramme, and Long averaged 350. In Bangkok's high-end markets, it's common to see Lin selling for 1,600 baht or more for 100g and Long selling for more than 1,000 baht.

It's far more expensive than the more widely available monthong and kanyao varieties, in part because the fruit is so difficult to produce and dangerous to harvest. In Laplae, there are no plantations with neat little rows of trees. Here, the trees are in the unpredictable control of nature, spread across a dense, ascendant forest with trails so steep, muddy and narrow that they can weaken the legs of the most experienced hiker.

Laplae is also a major producer of monthong and local varieties of durians that seem to form a protective layer around the Long and Lin trees. A farmer could walk 6km or more up and down the slippery hillside before encountering a single Long or Lin tree. It's exhausting, backbreaking work. Harvesters work from dawn to dusk and often in teams, with one person climbing the trees to drop the fruit some 20-30m to a teammate working below. The fruit is then loaded onto a motorbike retrofitted with metal side baskets and very gingerly driven out of the forest. Drivers deliver the durian to local vendors who pay them 500 baht for every 1,000kg collected. It takes a minimum of six trips into the mountains for the best workers with the strongest bikes to hit that number. The season lasts four months, with the bulk of the harvest occurring in May and June before petering out in July and August.

Almost without exception, the town's durians are grown organically. Laplae's farmers have so far resisted pressure from Chinese companies to use chemicals and pesticides. They have operated the same way for centuries and apparently not yet ready to yield control. 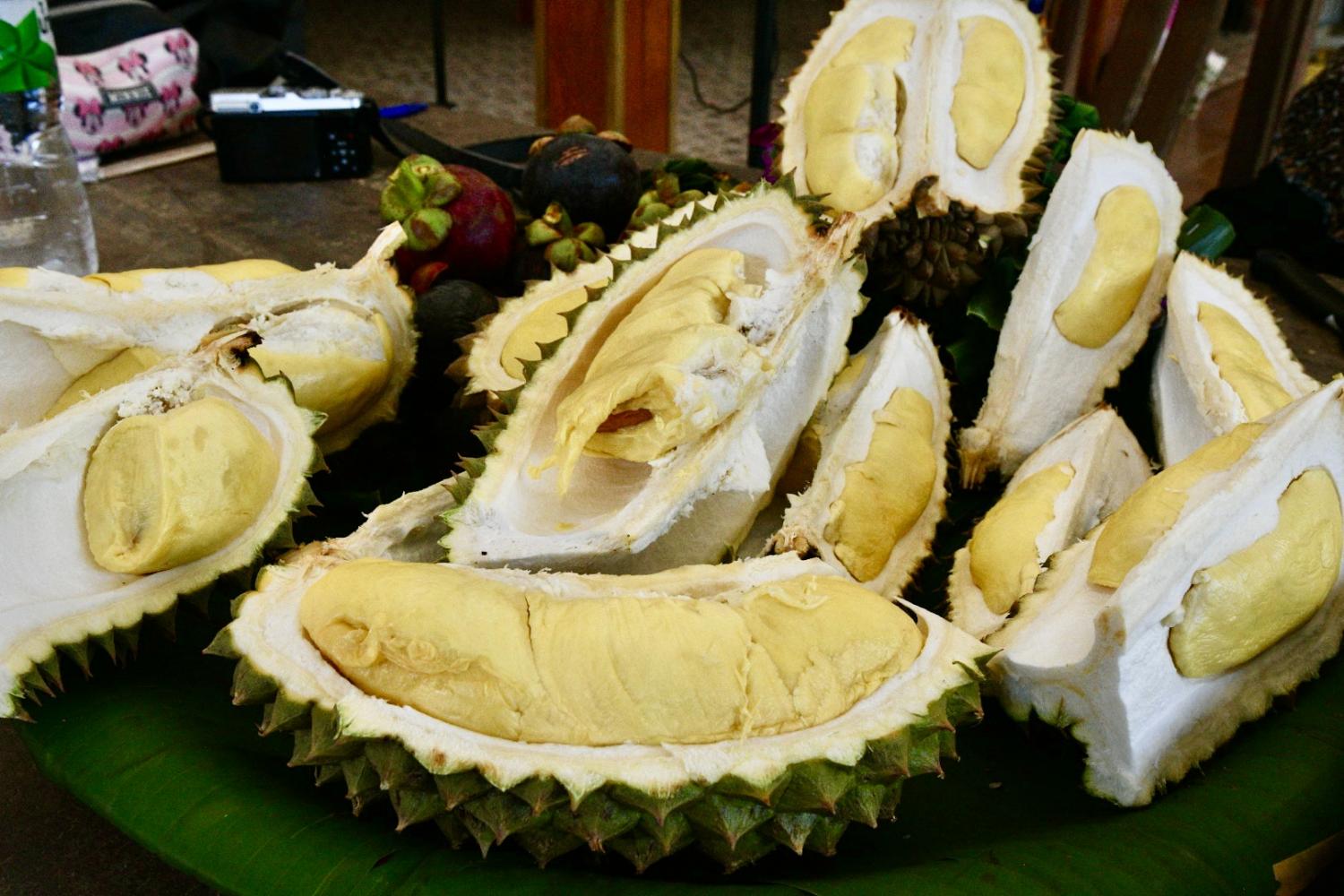 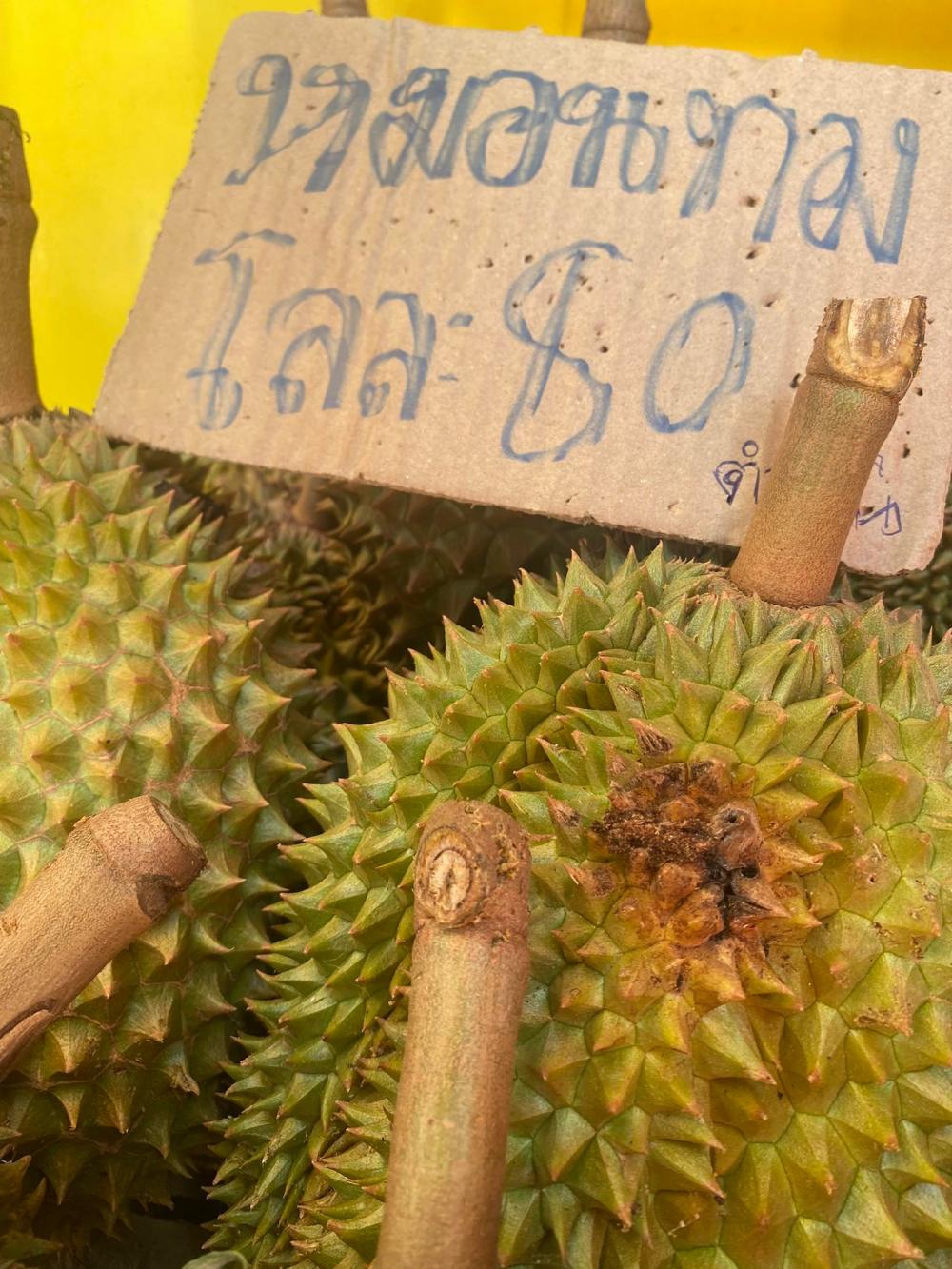 There are two durian markets in Laplae. A new, modern market serves as the centre of the region's lucrative export trade to China. The old Hua Dong market, named after a nearby temple, with its dirt roads, ramshackle structures and corrugated roofs is where all the real action goes down though. The market is kinetic and frenetic, especially on weekends. People and products move in and out. Prices fluctuate throughout the day. It's constant motion, hands and money, and where the corporeal meets the divine, because whatever the end game -- whether buying or selling -- everyone is there out of an unyielding faithfulness to the king of fruits. The Hua Dong market serves as an important pilgrimage stop for the durian lover and it's a sight to behold.

Laplae also is home to an energetic group of young entrepreneurs who have enjoyed the fruits of their parents' and grandparents' labour, seeking higher education and advanced degrees from the finest universities at home and abroad only to return to their beloved hometown to expand on what their ancestors have already built. They have created brilliantly landscaped homestays, restaurants, cafes and coffee shops, trying to coax durian shoppers arriving from nearby provinces to stay a little bit longer and enjoy Laplae's abundant natural beauty.

"It's kind of hard for us because the government owns most of the land and has deemed it for agricultural use only," said Sukanya "Summer" Meerat, 30, owner of Summer Green Cafe, a coffee shop, bakery and restaurant who offers her own line of durian-based desserts and products. "We would like to bring more people here but we are limited in what we can do." 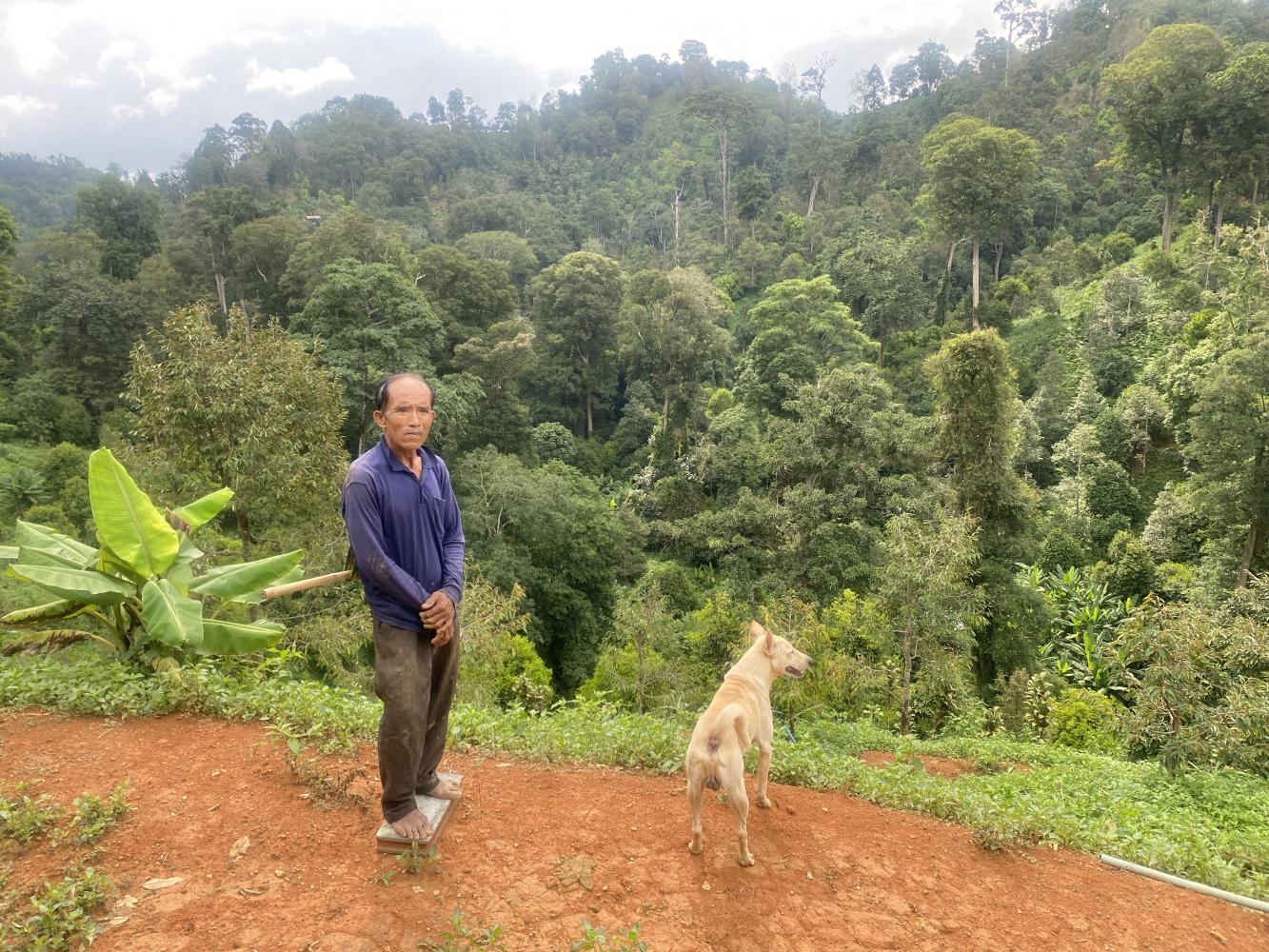 Savang Punlad, grandson of the creator of the Lin Laplae durian, surveys the family farm that produces about 15 tonnes a year.

Laplae does offer other activities beyond the durian. There's a picturesque waterfall, challenging trekking routes and historically significant temples. A drive up the town's curved mountain roads stopping for photos at various viewpoints along the way is about as pleasant a day one can spend.

But let's be honest. If you're here, you're here for the durian. To suggest otherwise would bar your entry to Laplae anyway. 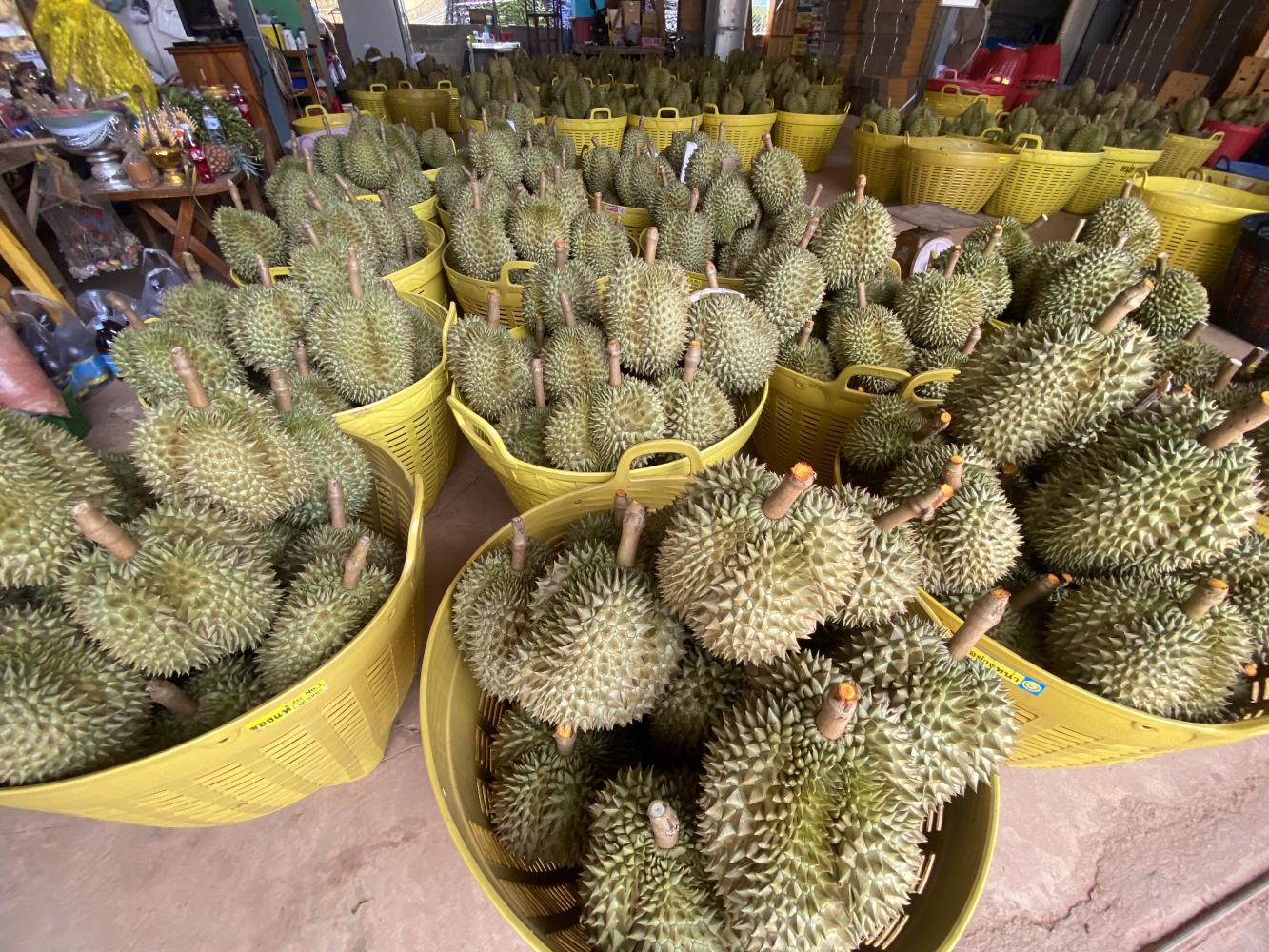 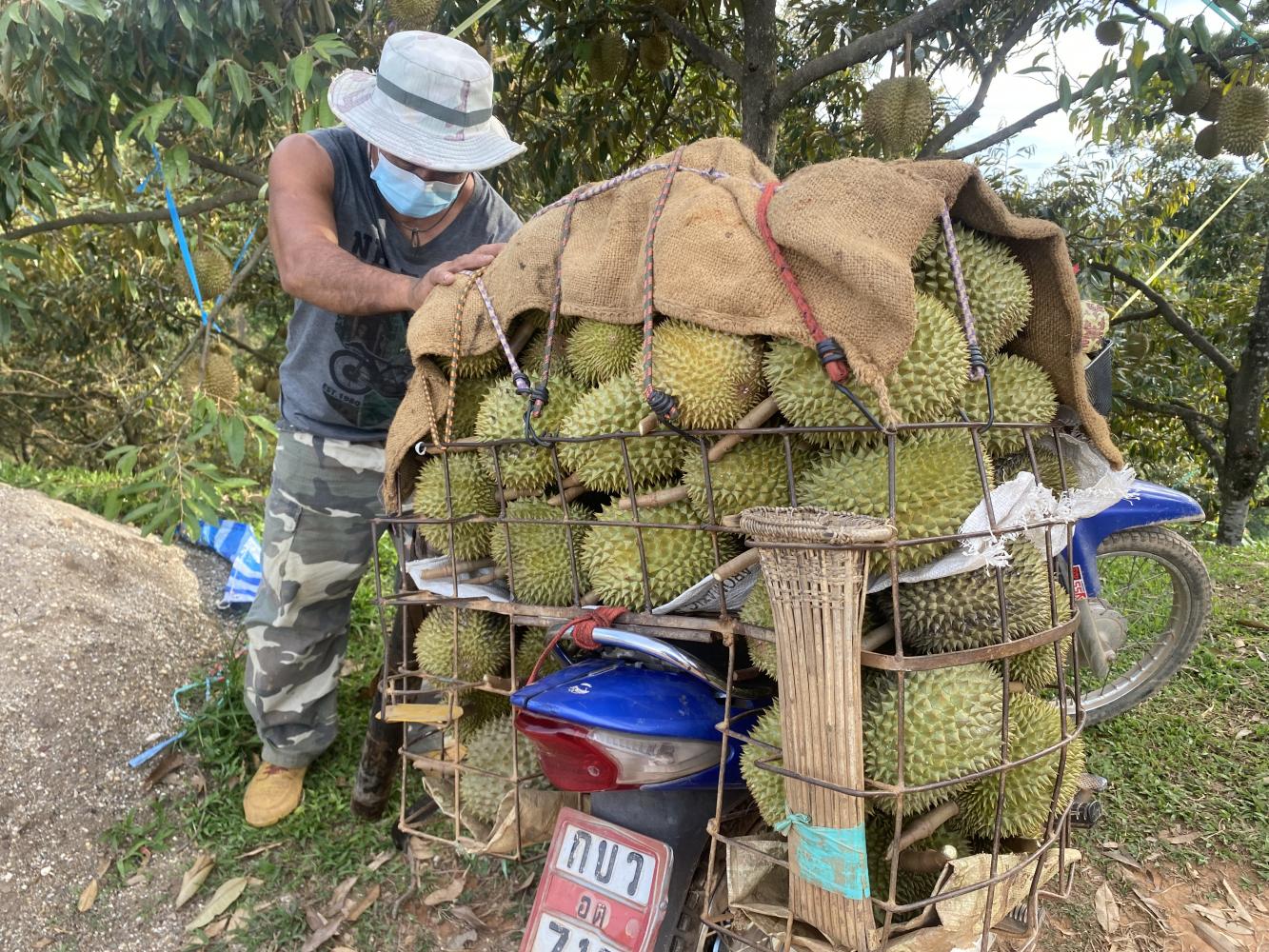 A durian farmer loads his motorbike. 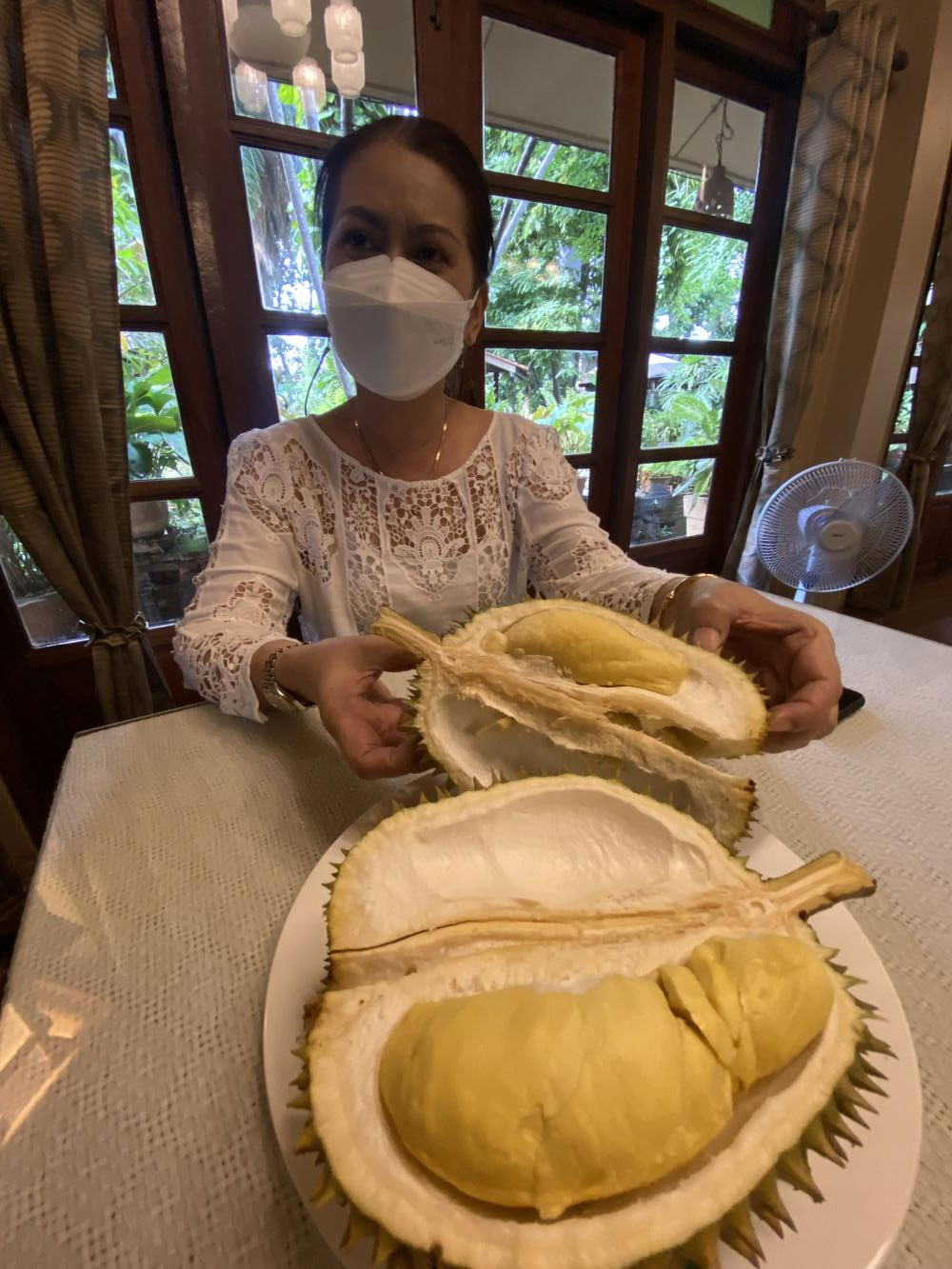 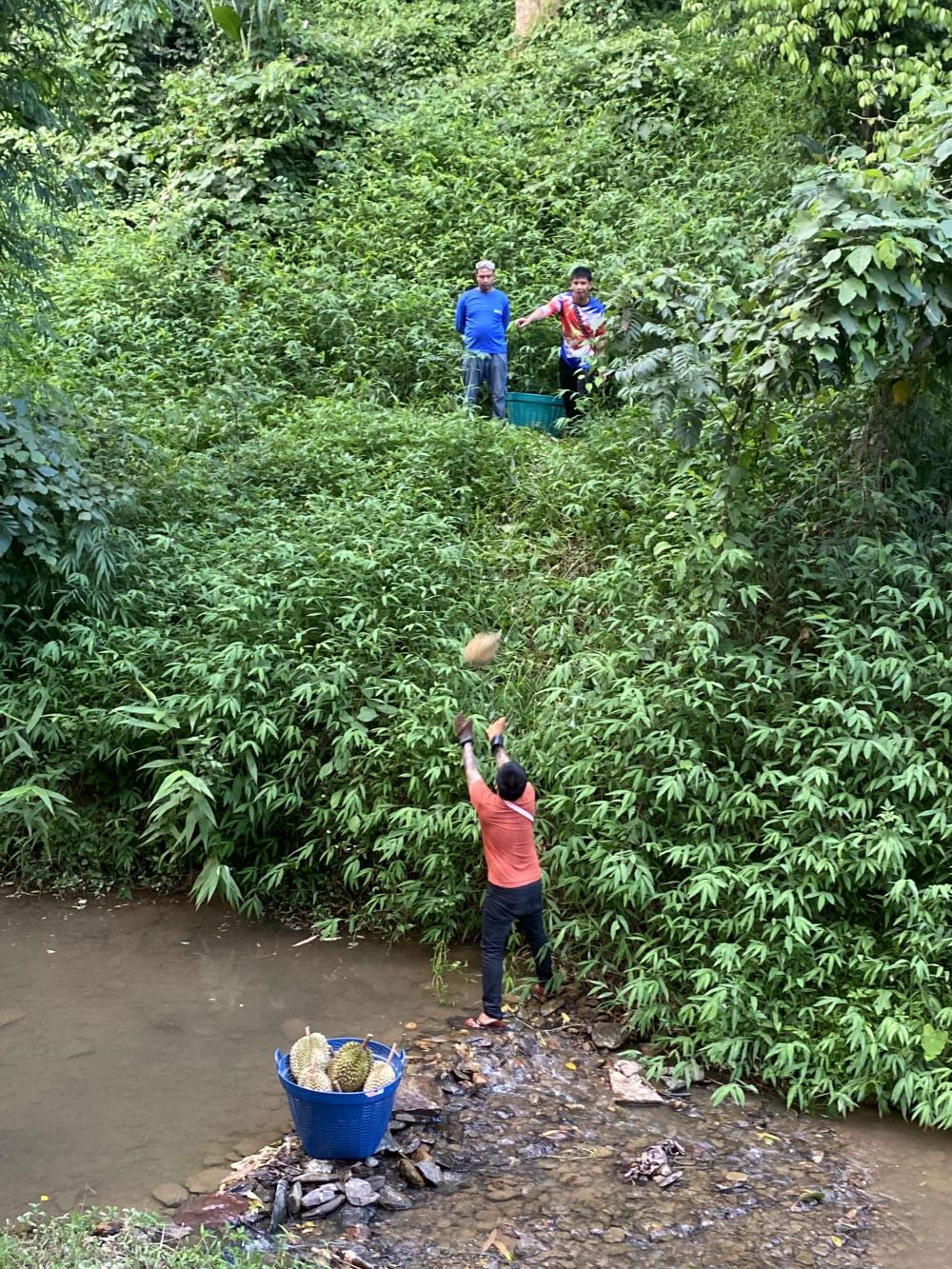 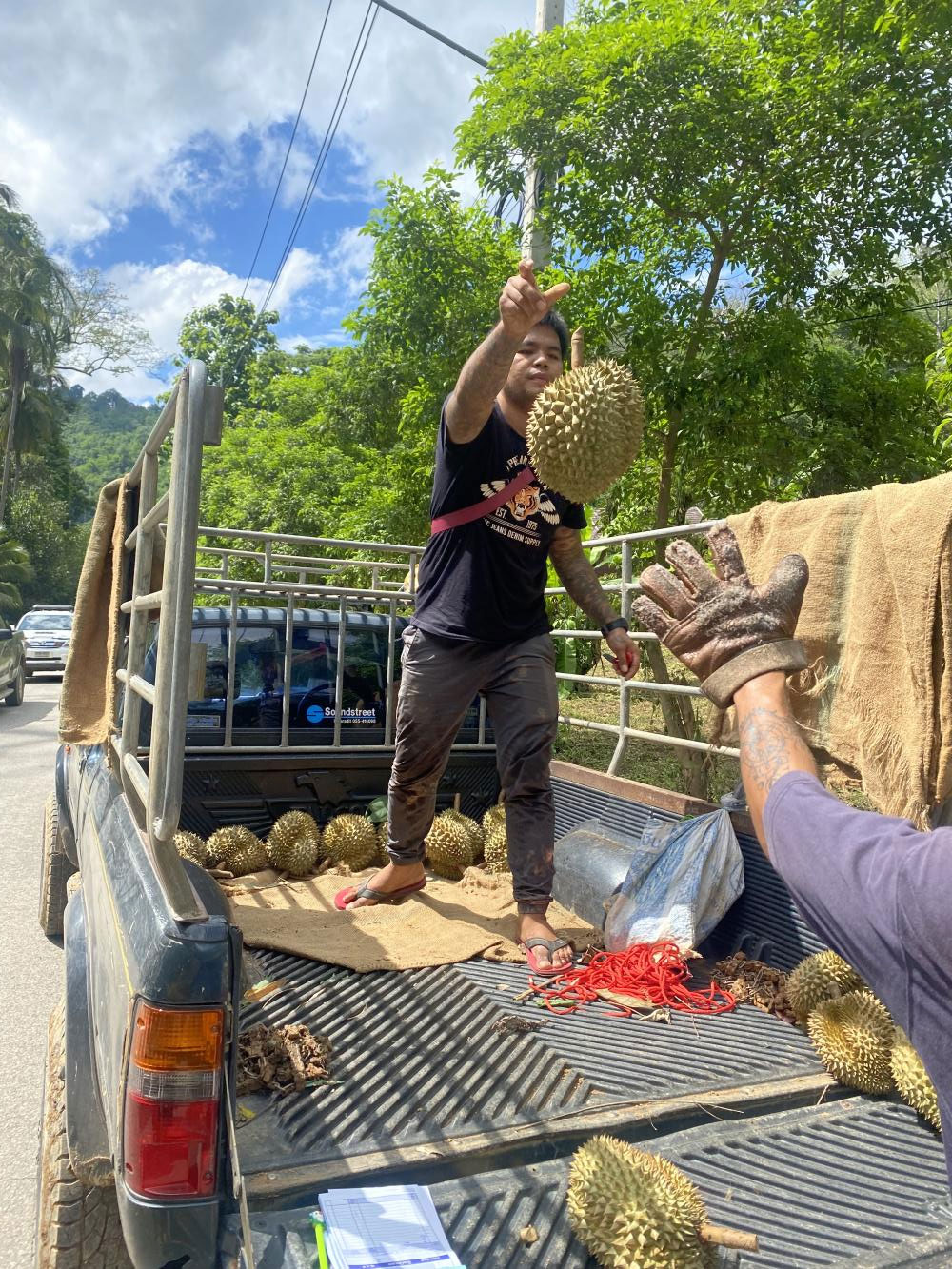