A journey back in time
Travel

A journey back in time

Sharing a border with Bangkok, Nonthaburi once served as a fortress town, but nowadays it is a popular weekend hideaway where local tourists can unwind and discover Ayutthaya-era history. To save time, King Thai Sa constructed the Lat Kret Noi network as a detour on the maritime trade route connecting the Gulf of Siam and the former capital of Ayutthaya.

As a result of erosion and shifting water currents, it turned into the Chao Phraya River as Ko Kret emerged as an island on the opposite side of town. Due to the Thai, Mon, Chinese and Muslim residents who live along the river, this centuries-old borough is a notable example of diversity and multiculturalism.

In addition to biking and walking, electric scooters offer a new low-emission transportation option for those who care about the environment. Learning to balance on wheels and use our thumbs to accelerate along the 17km riding path was enjoyable.

While gliding through alleys and waterside communities, visitors may envision the classic sight of bustling floating markets and houseboats cruising around the docks. Some 180 historic temples can currently be found throughout the city.

Tucked away in Sanambinnam Road, the journey back in time begins at Wat Tamnak Tai, where King Taksin built a temporary pavilion and authorised a three-day, three-night celebration to welcome the Emerald Buddha statue transported from Vientiane to the Thon Buri kingdom. 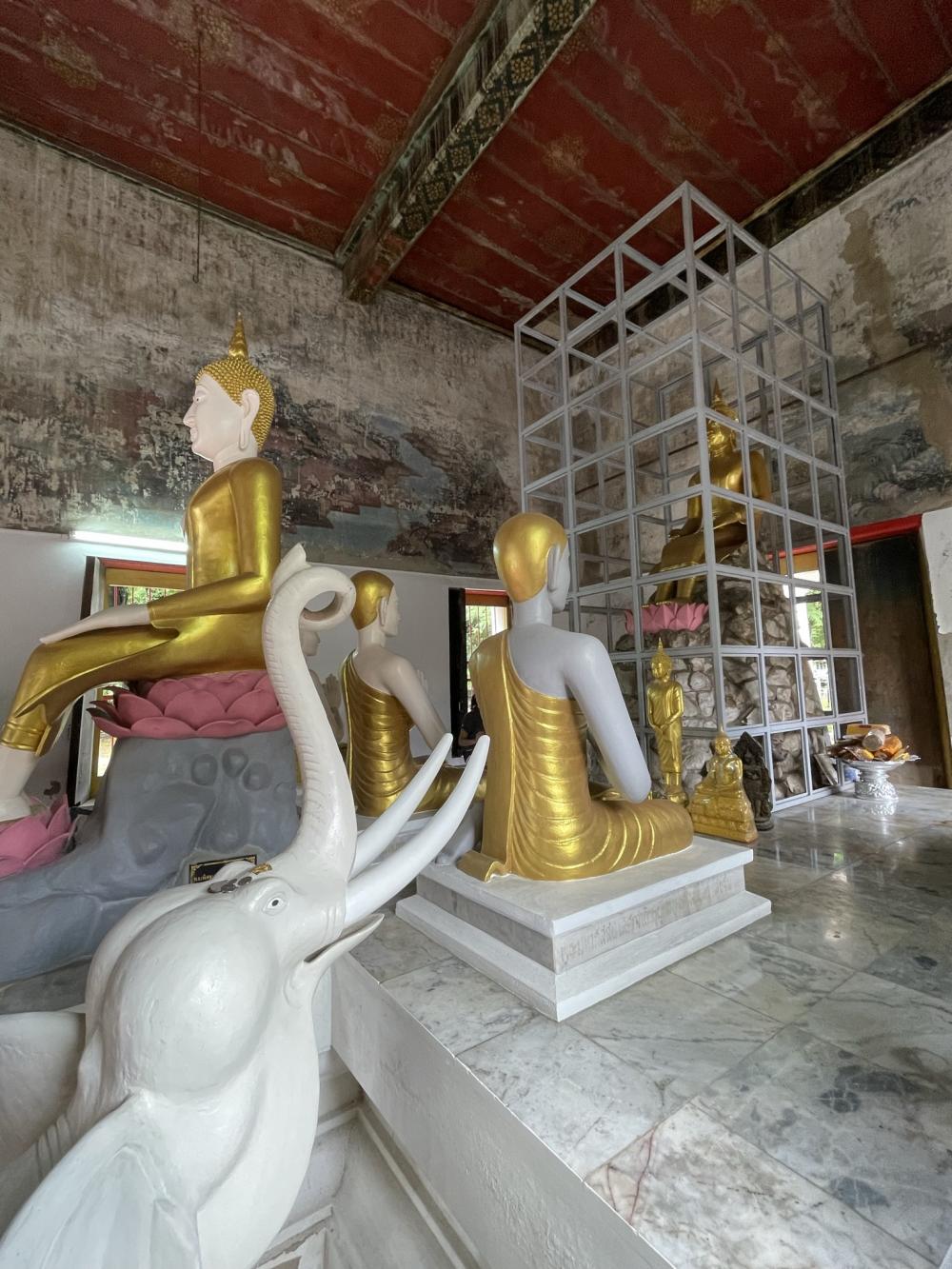 Wat Tamnak Tai is home to the Ayutthaya statue of Buddha in a posture of Palilayaka.

This area was formerly known as Bang Thoranee before the temple was erected during the reign of King Rama III. The historical ubosot faces east towards the former major transportation routes of the Bang Thoranee and Bang Kraso canals. Inside, visitors can pay homage to a revered Ayutthaya-style Buddha statue in a posture of Palilayaka seated on a hill while an elephant and a monkey offer a honeycomb and sugarcane.

Most ancient murals on the walls have faded, but others still stand to show rural life such as a villager carrying a shotgun to hunt animals in the forest, a boat sailing from China, and Indian merchants moving around. There's also the solar deity riding a lion chariot to signify the daytime according to the Buddhist universe as the wooden doors are painted to illustrate traditional table settings.

Around 70 years ago, the temple was extended to accommodate the growing number of pilgrims with the construction of a new two-storey ubosot. It houses a Sukhothai-style statue of Luang Po Thongkham, who has a beautiful oval face. Local craftsmen adopted contemporary methods from renowned author and painter Hem Wetchakorn to create realistic murals depicting Lord Buddha's 10 lives.

After practising scooter riding, it's time to put our talent to work. As we slowly go into Soi Nonthaburi 33, cars and motorbikes share the little lane with us. A group of welcoming soi dogs bark to greet visitors. 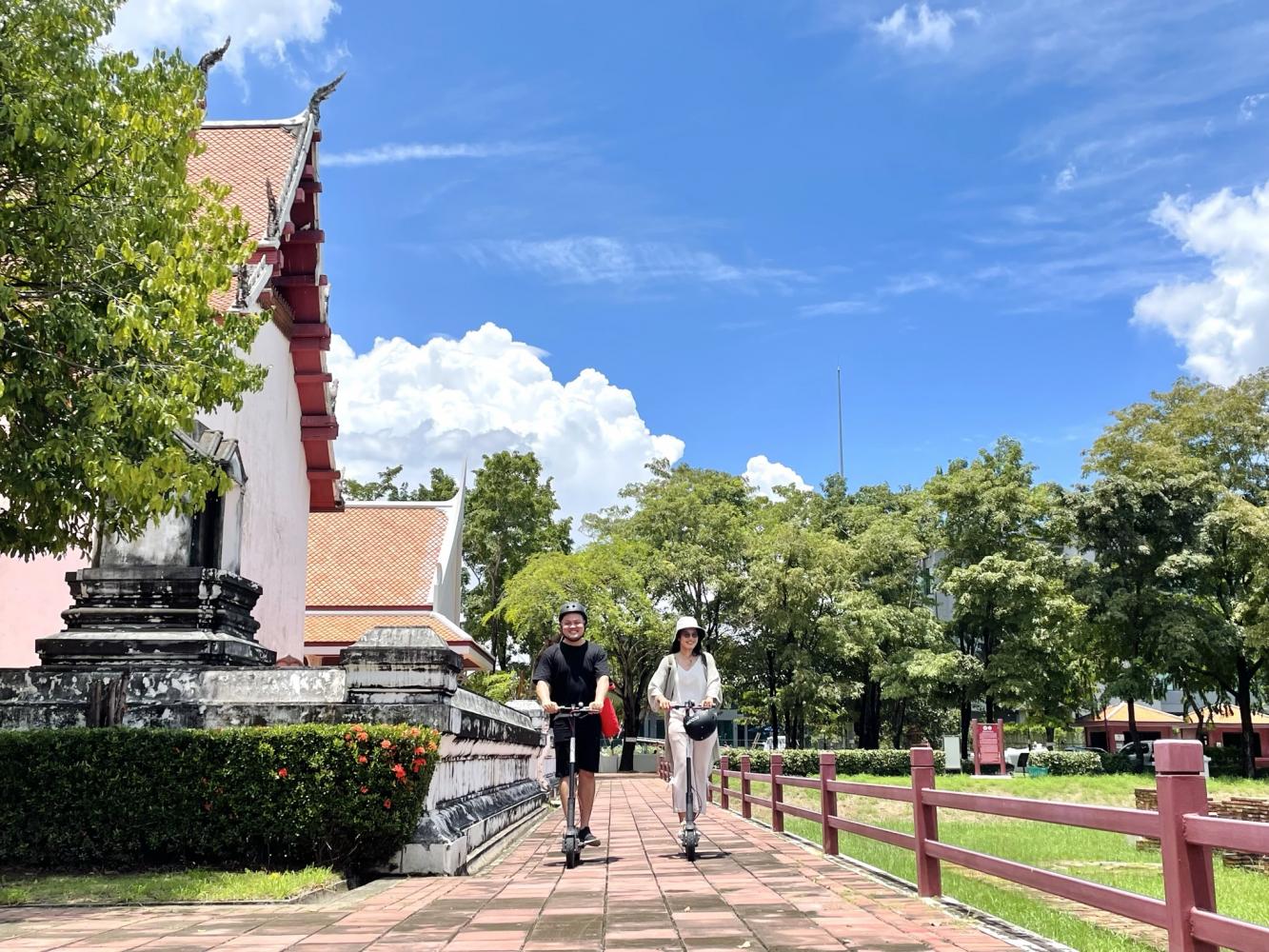 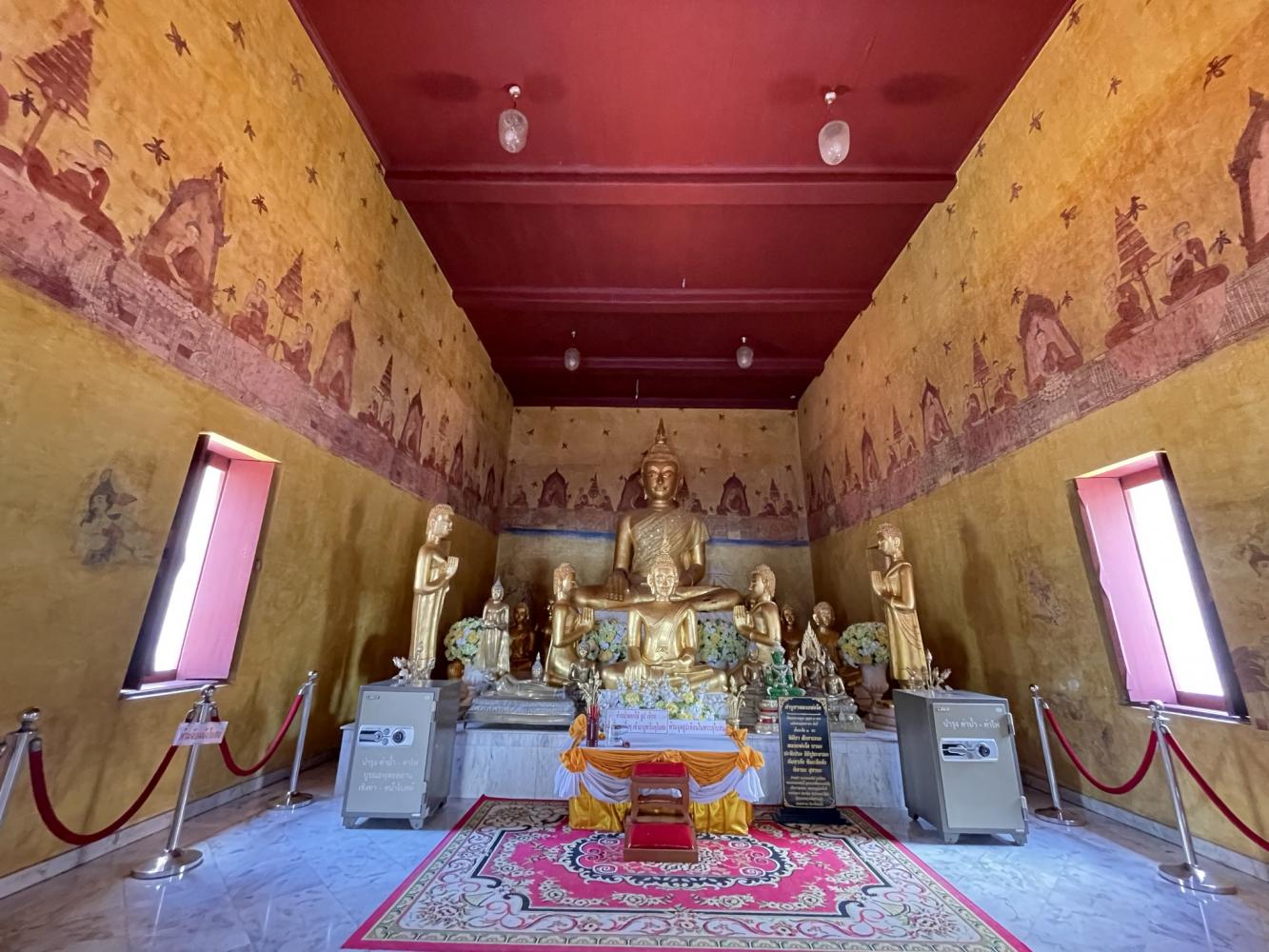 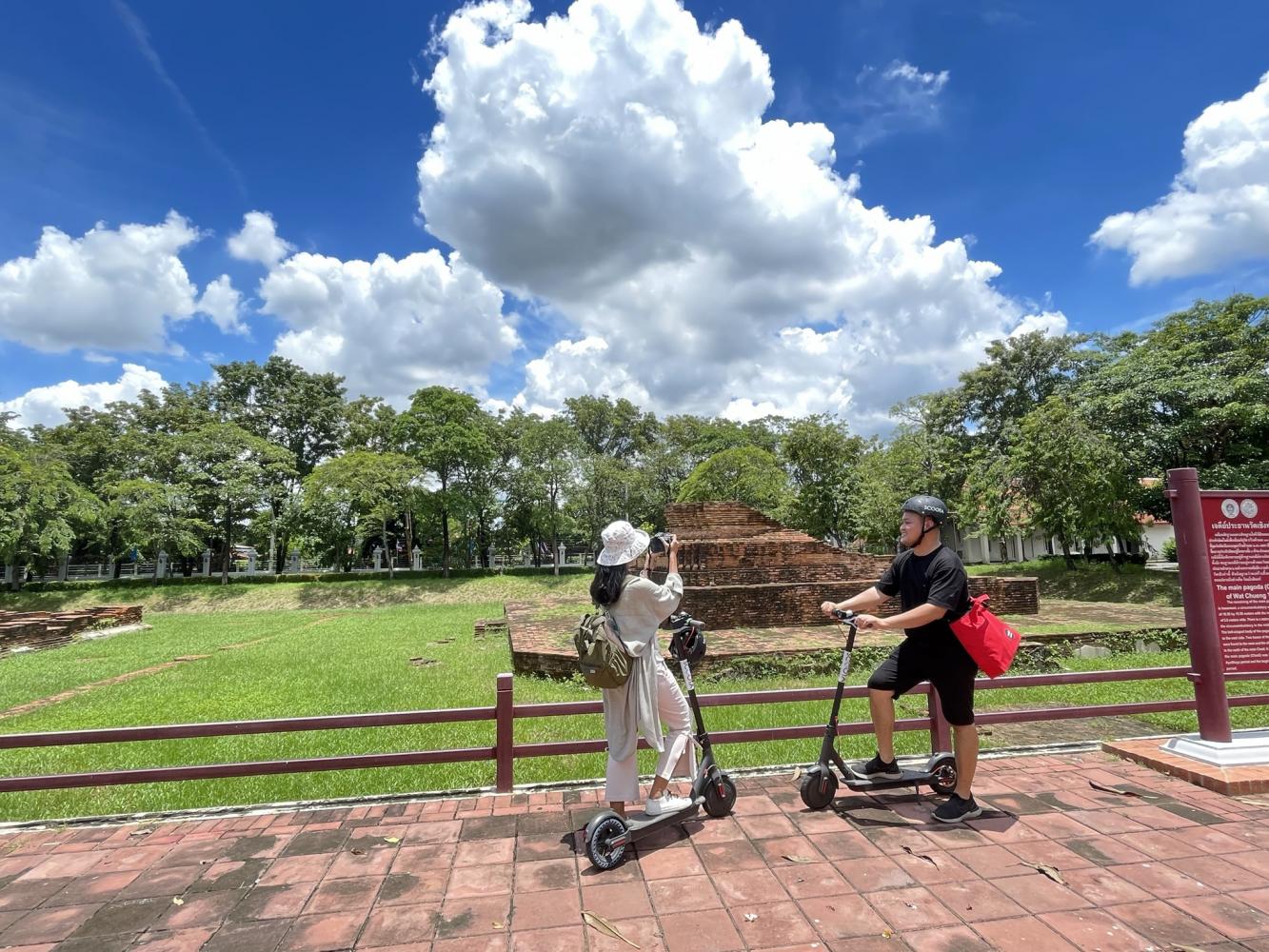 In the blink of an eye, we reach Wat Chomphuwek, built during the reign of King Narai the Great.

To honour its splendid architectural art, the Fine Arts Department placed this temple on the list of national ancient monuments in 1974. Mon residents also built the white Mu Tao chedi, which was influenced by the Shwemawdaw pagoda, to enshrine Buddha relics, while the historical Ayutthaya-style ubosot houses statues and murals of Kassapa Buddha, Konakhom Buddha, Gotama Buddha and Phra Sri Ariya Metrai, the future Lord Buddha.

Along with the Ten Great Birth Stories of the Buddha on the walls, visitors can also see the country's most beautiful painting of the Goddess of the Earth curling her hair above the entryway. Also on display is a Mon guy whispering into a woman's ear and touching her breast, while others show people scrambling to obtain auspicious coins during an ordination ritual.

When you gaze outside, you can see the gables decorated with ceramics and stuccos of rice farmers as well as an elephant procession to symbolise the way of life. A short distance away, the old vihan's walls display various murals of Lord Buddha to reflect the Buddhist belief that there are 28 Lord Buddhas.

Then, on the banks of the Chao Phraya River, we wind our way through a 1.4km maze of a waterfront village to the Buddhist site of Chueng Tha-Na Bot. Before the second collapse of Ayutthaya, Wat Cheng Tha was located near the mouth of the Bang Talat canal, while Wat Na Bot stood next to the Khanon checkpoint in the Pak Kret village. 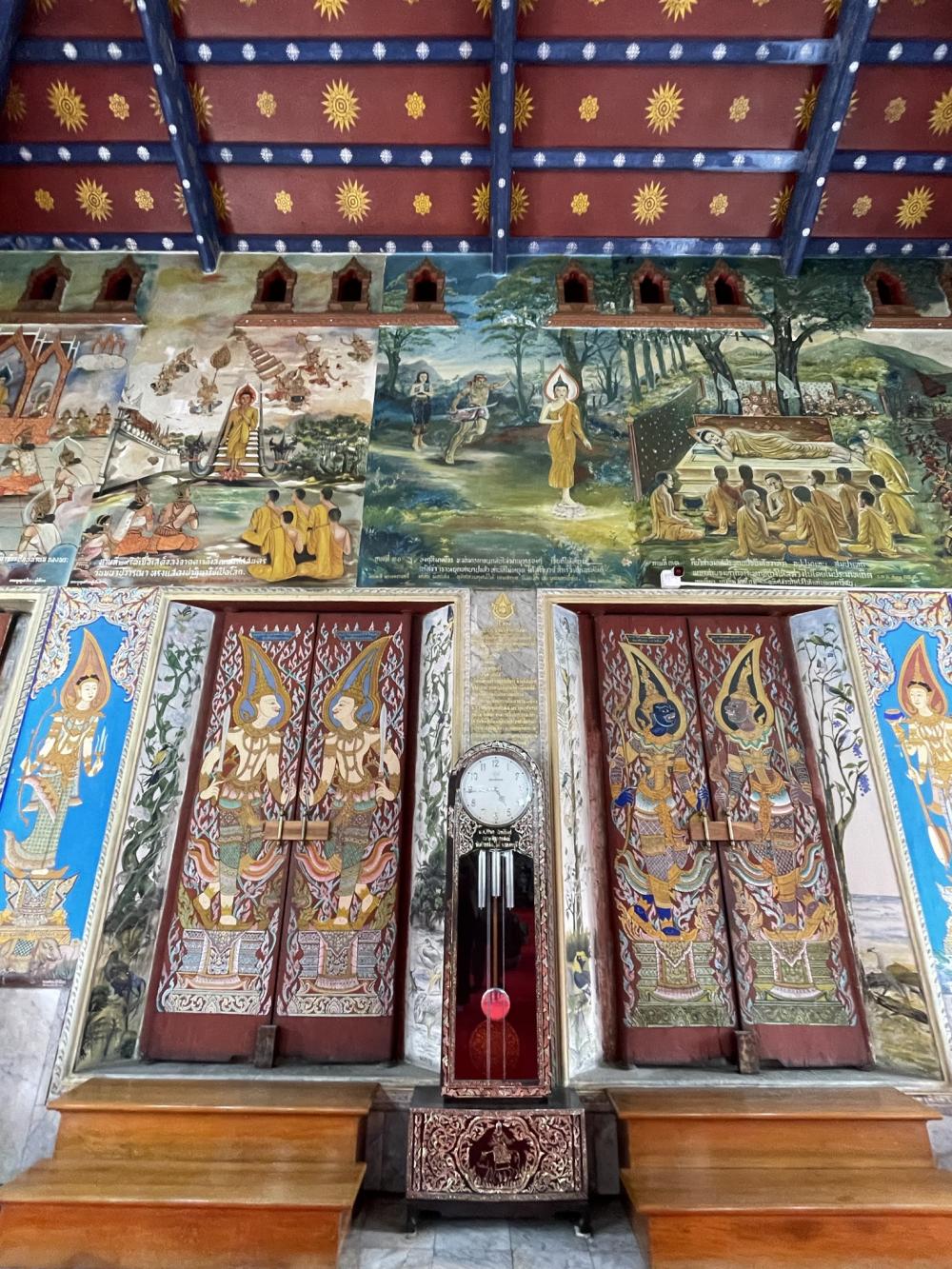 The old temples were renovated in 1774 after King Taksin allowed Mon migrants to settle in this area, but in 1955 the Royal Irrigation Department used this plot of land as a campsite for its technical staff in exchange for the construction of Wat Chonprathan Rangsit.

In 2007, Nakhon Nonthaburi municipality and the Fine Arts Department restored Wat Chueng Tha to be a tourist attraction, where young generations can come learn about history and architectural art. The hoary ubosot's original Ayutthaya-style structure has been preserved while fading murals depict 28 Lord Buddhas, Mon people's daily lives, and a traditional Mon-style funeral.

We continue down the Bang Talat canal to Wat Klang Kret, which is located on Soi Tiwanon-Pak Kret Soi 1. It was constructed in the Ayutthaya period and local villagers donated money to revive the historical ubosot to house a sacred Ayutthaya-style Buddha statue.

Not far from Wat Klang Kret, we scoot through a pottery-making hamlet and stop by the newly renovated boardwalk, which is quickly gaining popularity as a vantage point for spectacular views of the Chao Phraya River, Ko Kret and an iconic leaning stupa, located in Wat Poramai Yigawat. 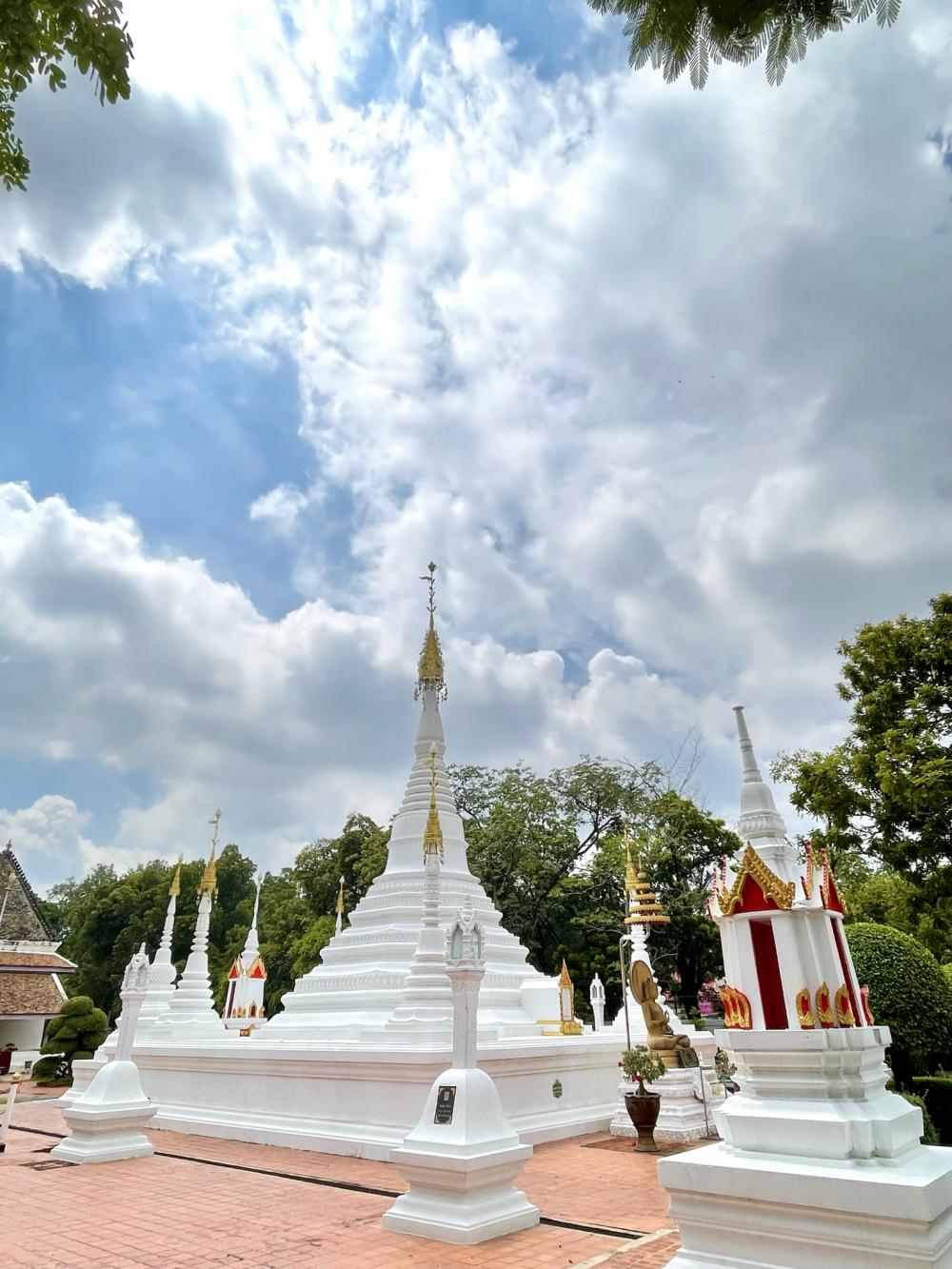 The Mu Tao chedi at Wat Chomphuwek is said to contain Buddha's relics.

Talat Pak Kret stands at the end of the walk and is flanked by old shophouses offering monastic supplies for monks, school uniforms, fashion apparel and other household items. It is home to Chalermchai Panich, a well-known 50-year-old kanom pia shop that has managed to maintain traditional techniques using scented candles to smoke flaky pastries filled with sweet bean paste and salted egg yolk.

We stop for lunch at the waterfront Hong Seng Pochana restaurant, which has been listed in the Michelin Guide 2022. Grilled river prawns, stir-fried crab flesh in yellow curry powder and hoy jor are among the recommended dishes.

After re-energising, we ride down small alleyways to the Ngeng Kuang Tua Shrine, which is 200m from the eatery. A Teochew man travelled from China to Nonthaburi and opened his home for a séance in which he gave Chinese medicine to the sick. Later, his devotees donated the land for the construction of a shrine, which was reconstructed in 2005.

Based on Taoist beliefs, it houses antique wood sculptures of Tai Shang Lao Jun (one of the Three Pure Ones), Yuanshi Tianzun (the Primeval Lord of Heavens), Hua Tuo (the first person in China who used anaesthesia during surgery) and other Chinese deities. A group of local pilgrims gather here to pray for good health and protection. 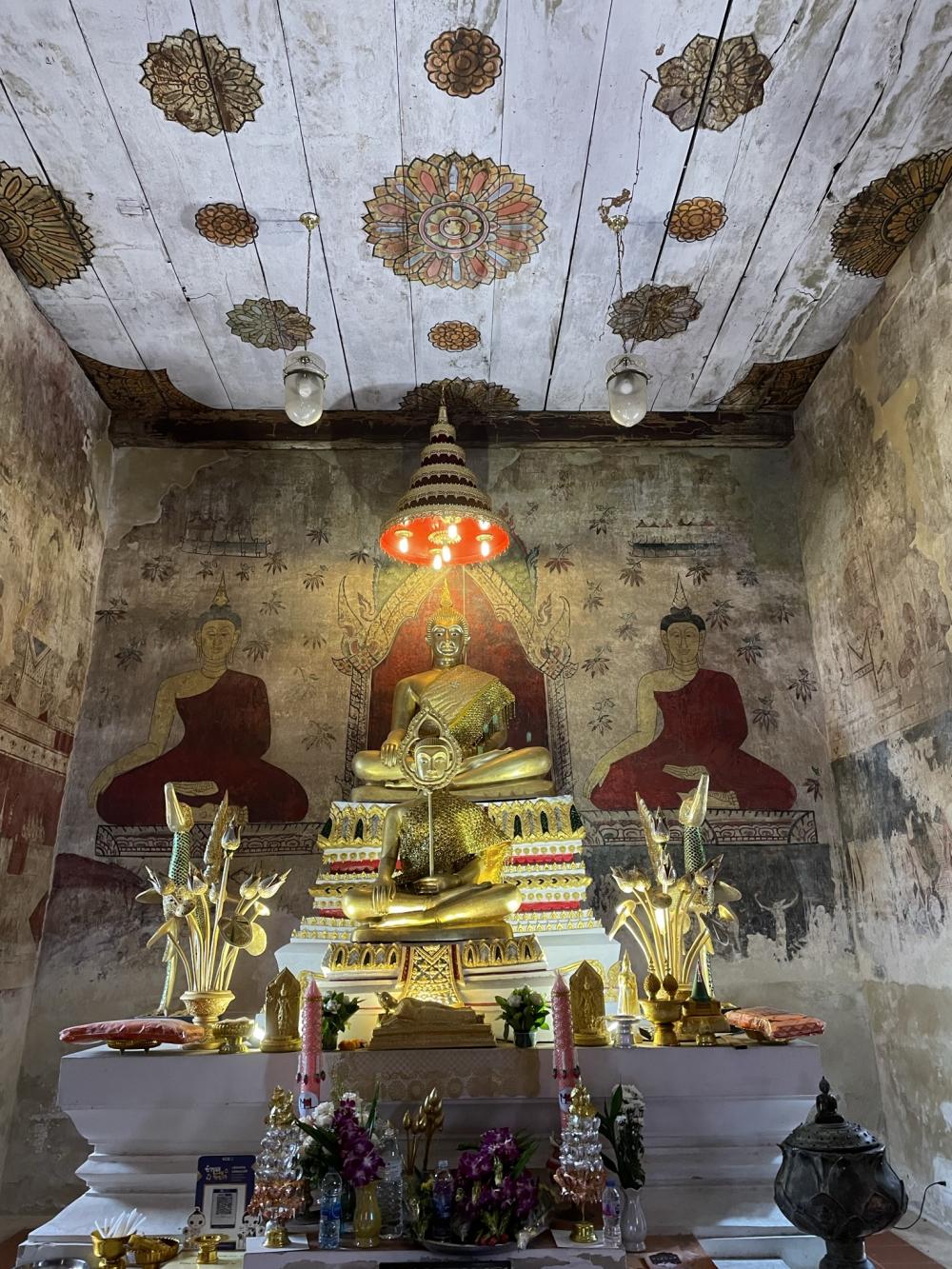 Our journey concludes at Wat Koh Phaya Cheng, also known as Wat Bang Phut, which is located on Sukhaprachasan 2 Road. During the Thon Buri period, Chao Phraya Maha Yotha (Tauria) dedicated this land to the construction of a temple, and its ubosot houses a reclining Buddha statue in a cremation posture and a Rattanakosin-style principal Buddha statue.

During the reign of King Rama III, the murals were restored to represent 28 Lord Buddhas, angels listening to sermons, mythological Annonta fish swimming around Mount Meru, and scenes from Thai literature such as Phra Suthon-Manora and Phra Rot Meri.

A short walk from a monastery compound, visitors can visit a white stupa of Queen Sunandha Kumariratana, which is situated in a nearby furniture factory. King Chulalongkorn built this memorial in memory of his wife and daughter, HRH Princess Kannabhornbejjaratana, who perished in a boat accident in this area. 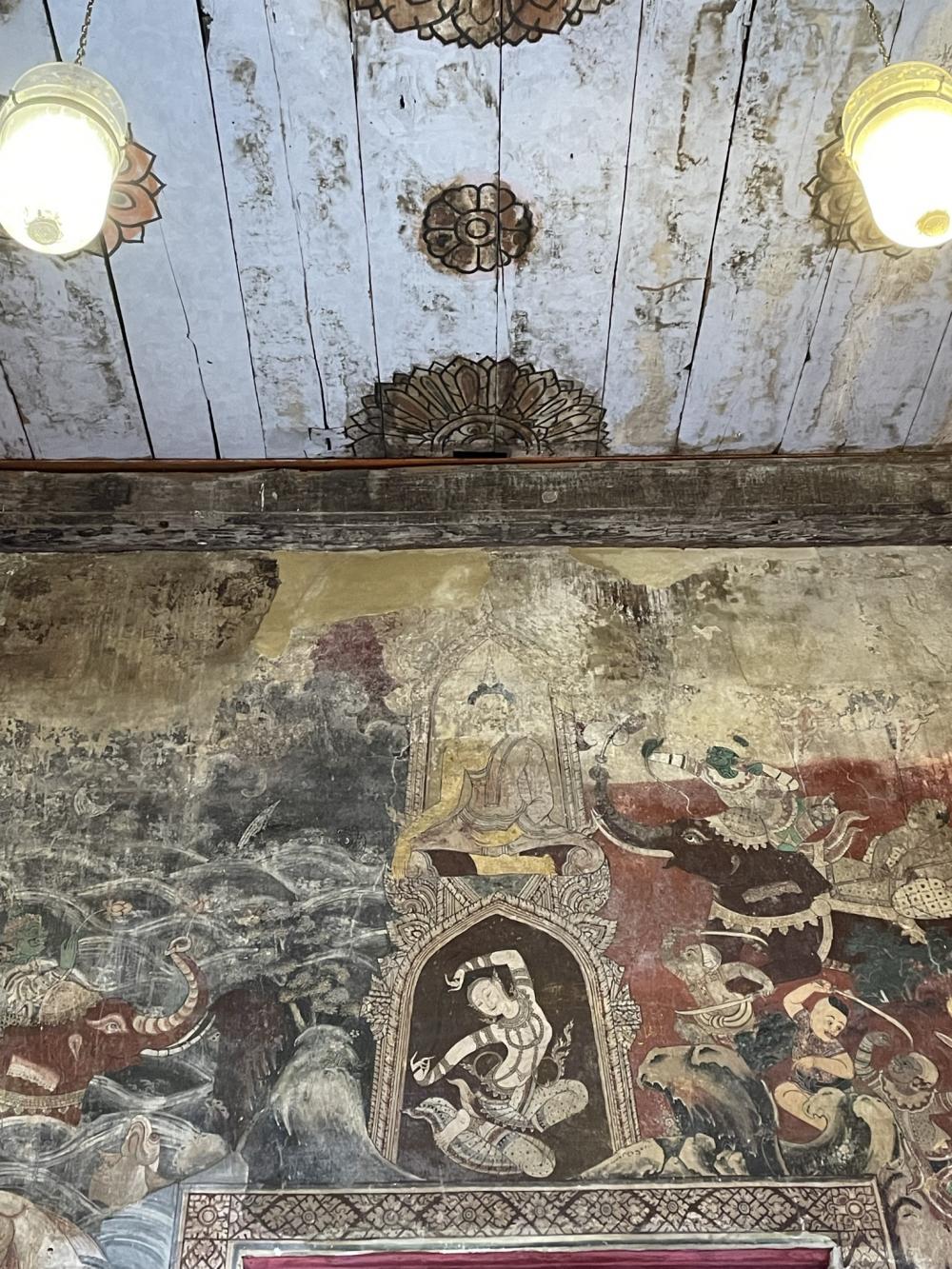 Wat Chomphuwek is famous for its stunning mural of the Goddess of the Earth. 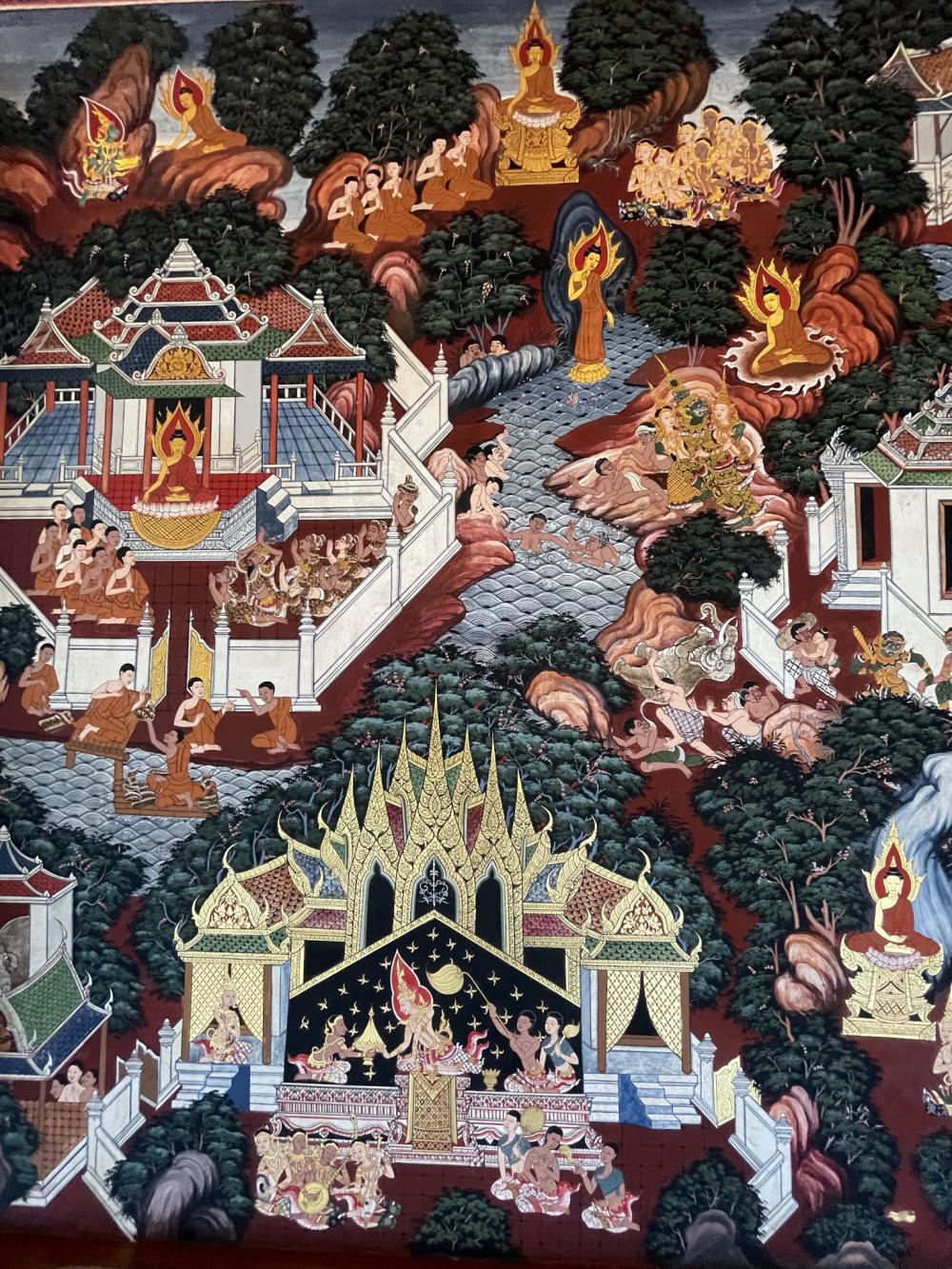 A newly renovated walkway is a new landmark for tourists. 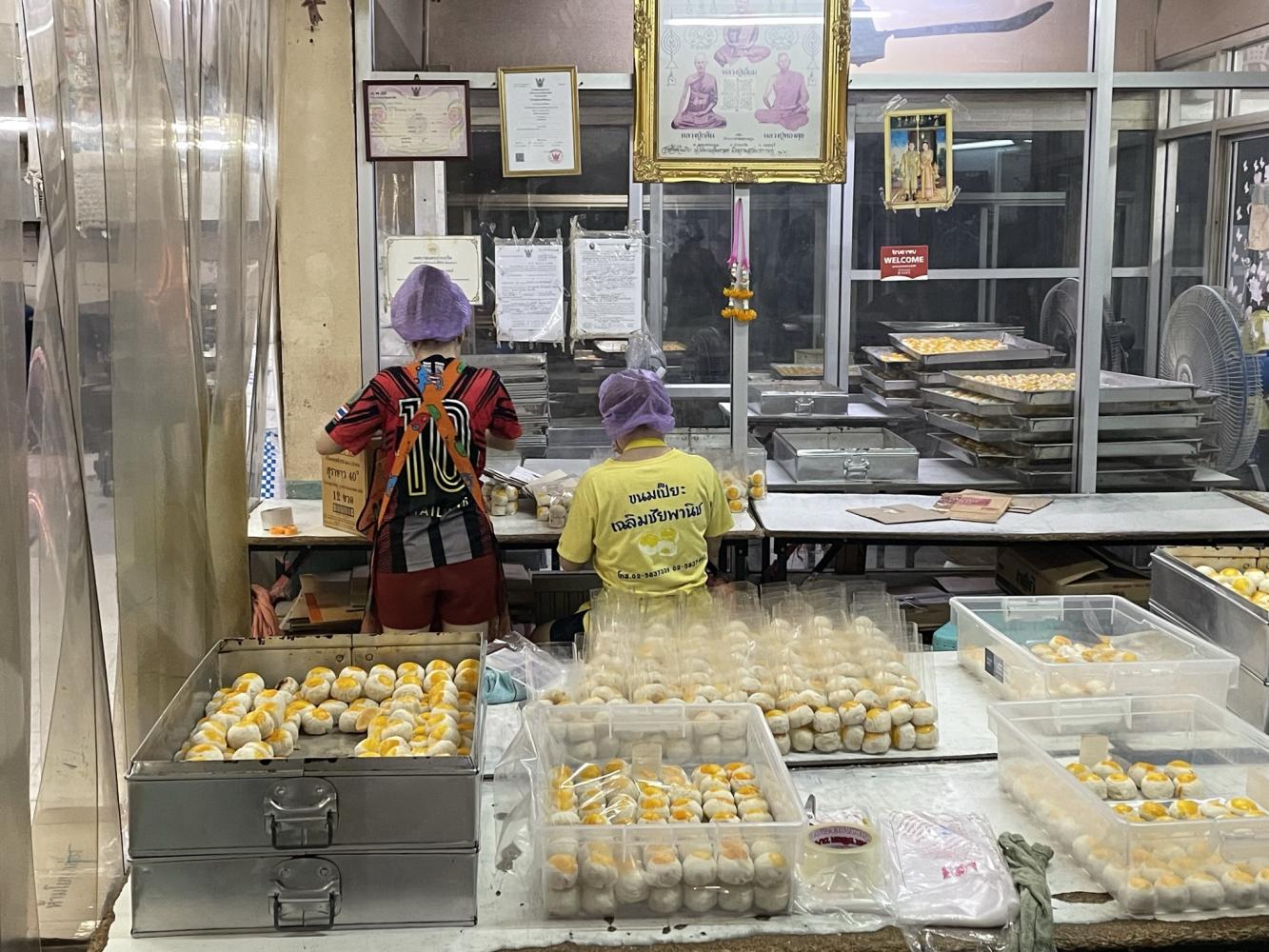 The Chalermchai Panich shop in Talat Pak Kret is iconic. 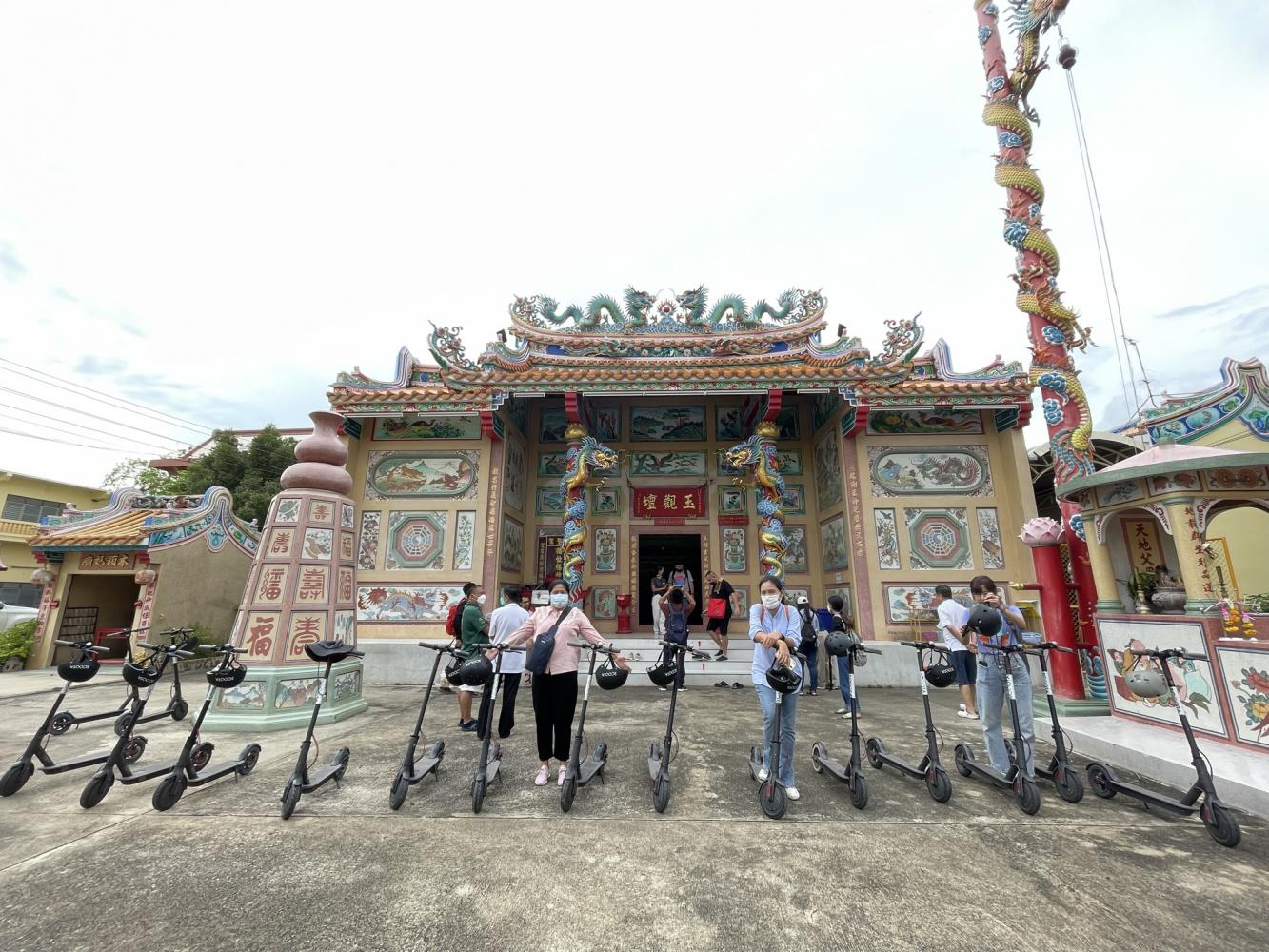 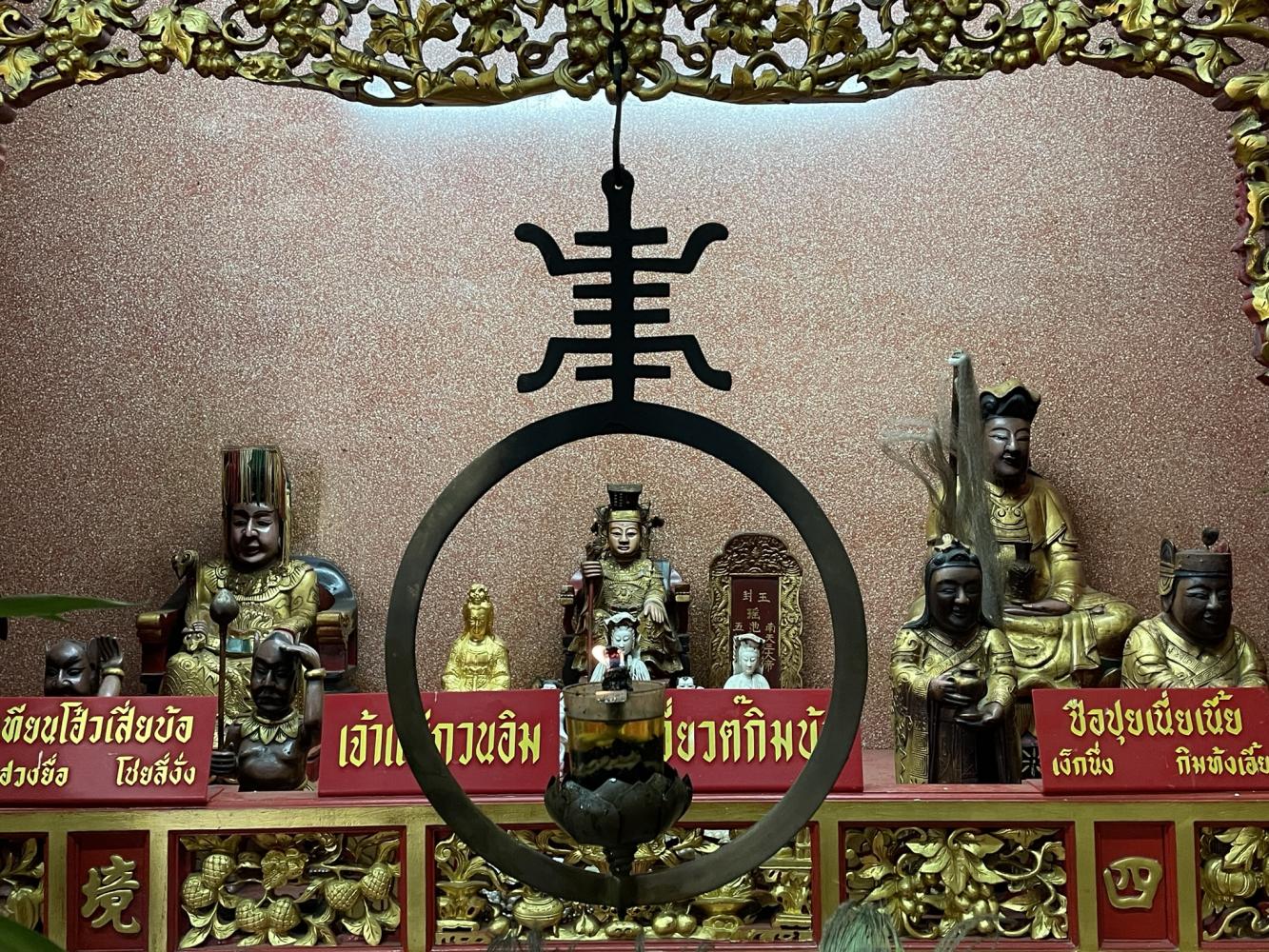 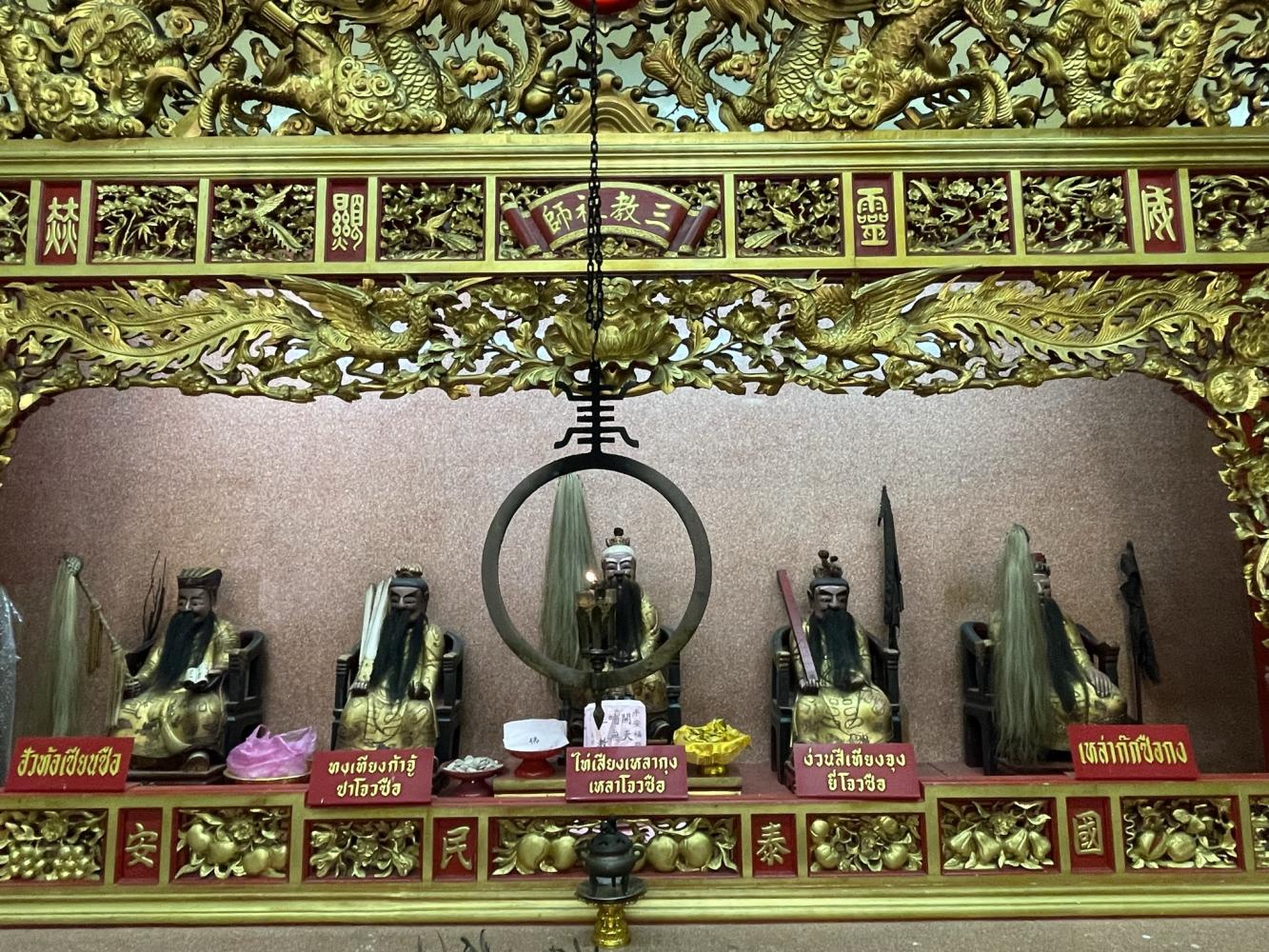 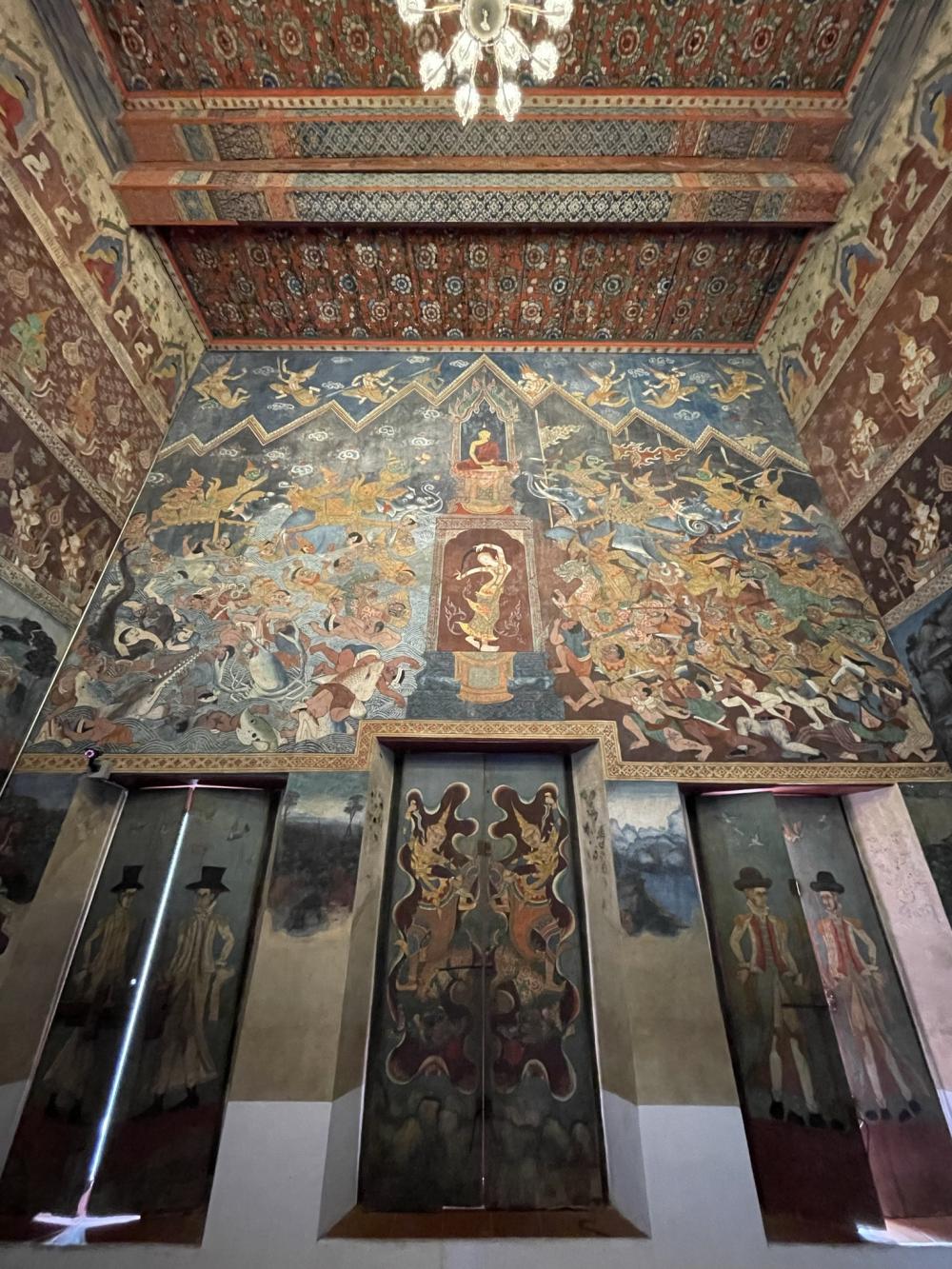 Wat Koh Phaya Cheng was erected in the Thon Buri period to enshrine a reclining Buddha statue in a cremation posture. 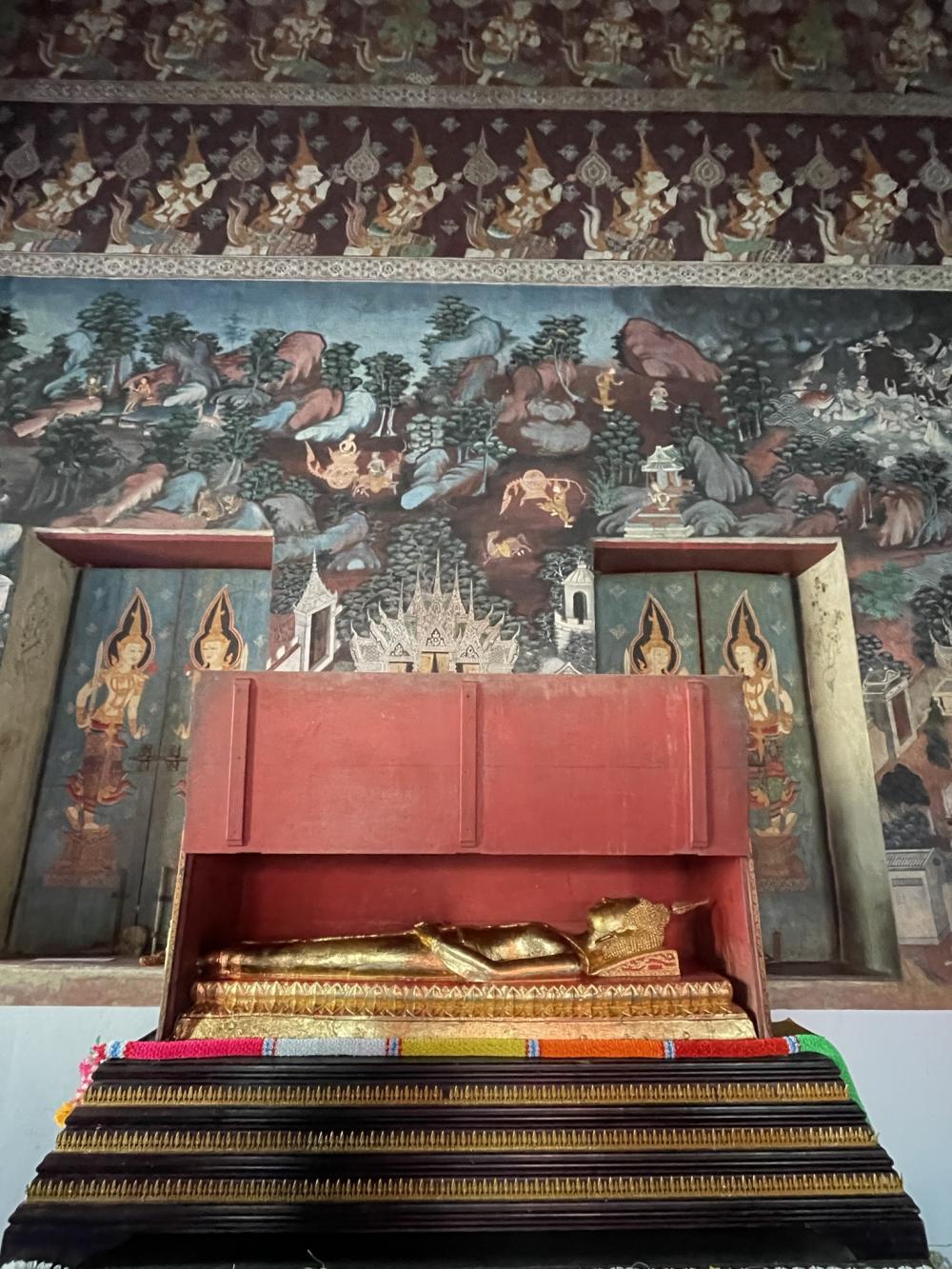 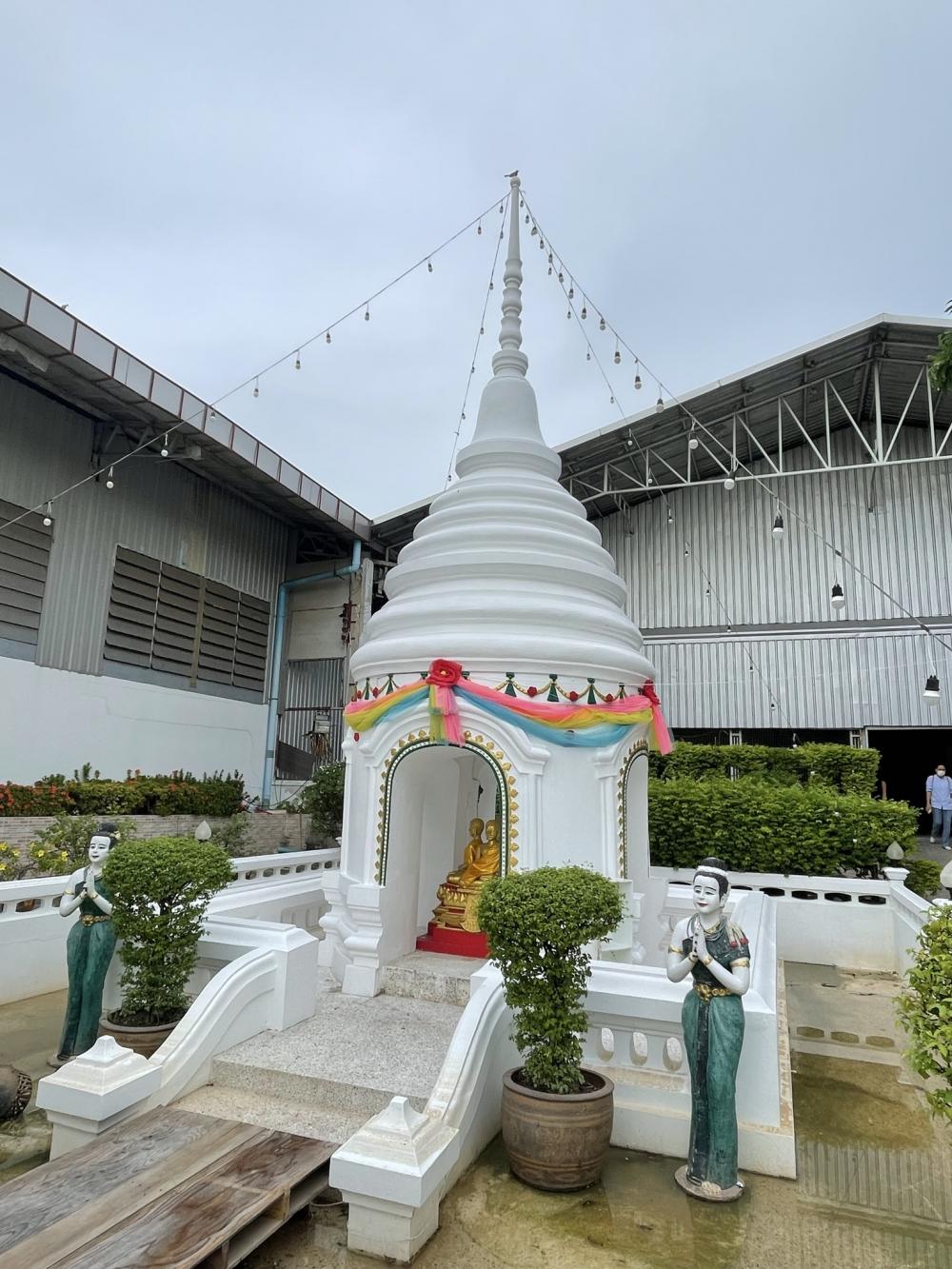 A memorial to Queen Sunandha Kumariratana was built by King Rama V.