Did you find it appealing to see the whole city in one frame and appreciate its enormity from above? If you are not afraid of heights, here is a list of observation decks in Thailand where you can take in spectacular skylines. 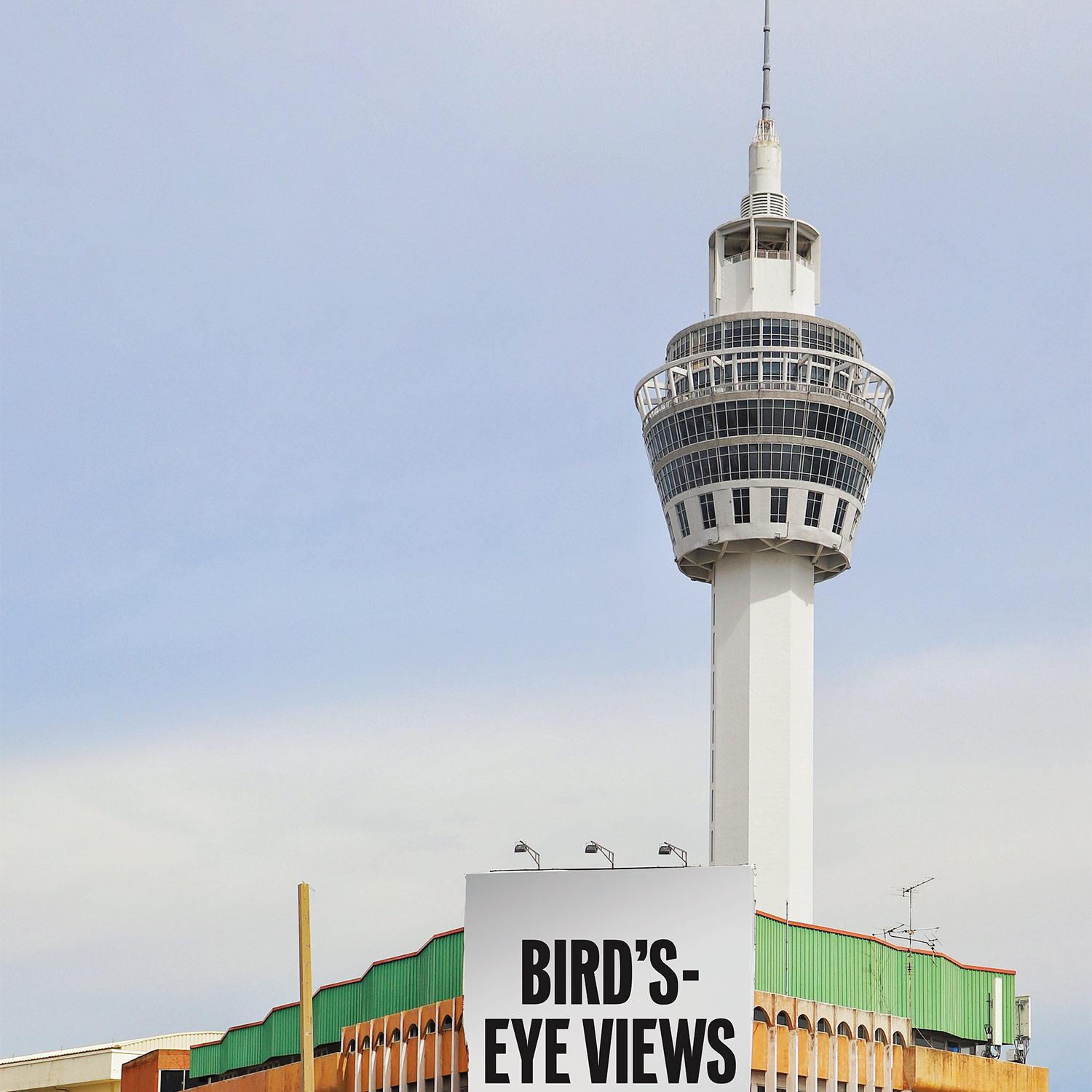 Speaking of a place where you can enjoy the view of the cityscape from the top, Bangkok has plenty of options but nowhere offers a sky-high sightseeing experience like Mahanakhon Skywalk (kingpowermahanakhon.co.th). Sitting on top of Bangkok's second-tallest skyscraper, King Power Mahanakhon, the observation deck is noted as the highest one in town at 314 metres above the ground, with indoor and outdoor viewing areas. It's just in the blink of an eye when taking a lift ride to the 74th floor, as you may be captivated by the cool video inside the lift without realising how fast it jumps off the ground. Once you're in the Observatory, the indoor observation hall covered between the 74th and 75th floors, experience incredible 360-degree panoramic views of Bangkok. Check out an exhibition displaying the story of the skyscraper and its surrounding neighbourhoods, or find some gifts at a souvenir shop. 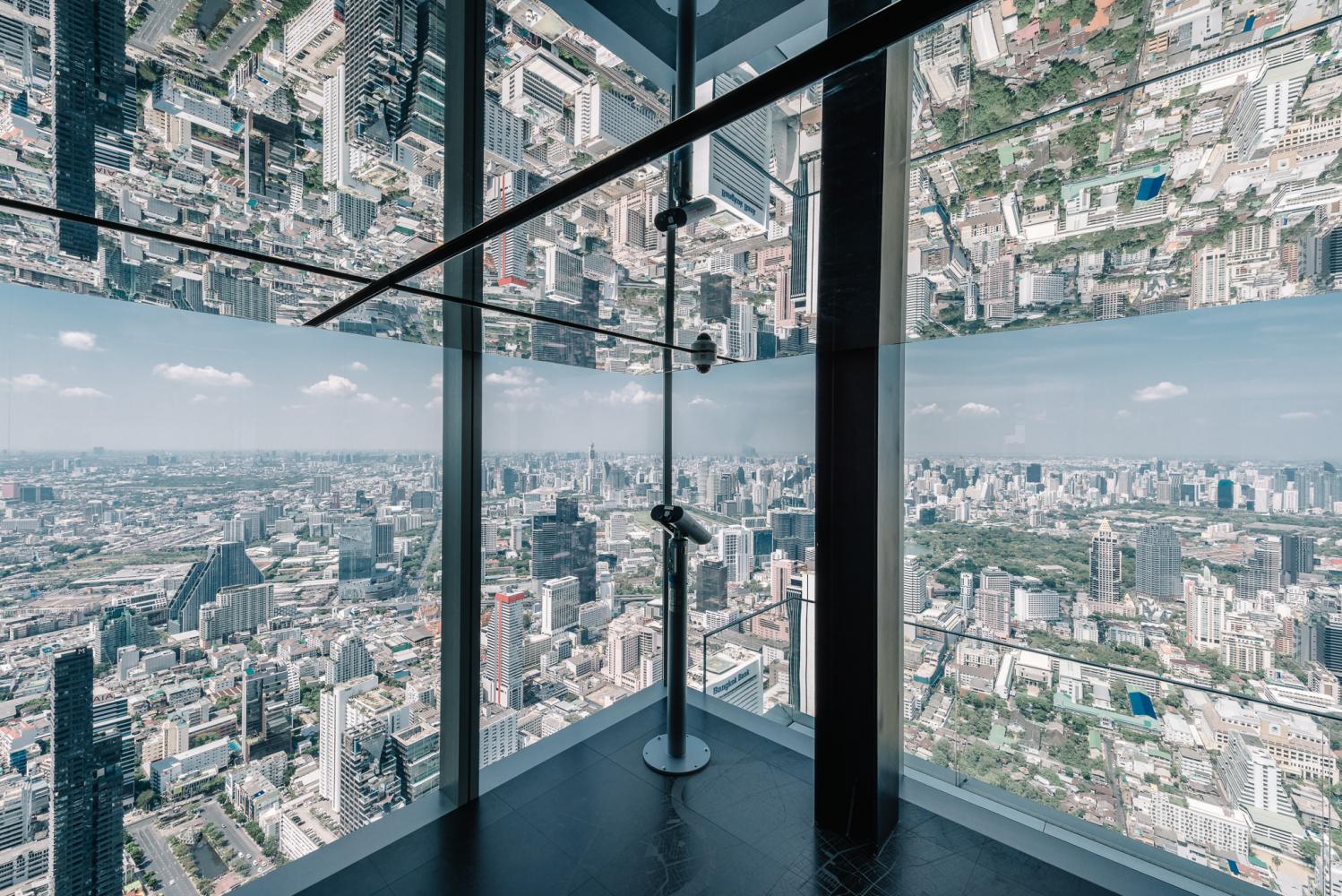 Take another lift to an outdoor observation deck on level 78, where the ride is quite eye-pleasing as the lift looks stunning in clear glass with a metal structure, surrounded by a glass spiral staircase. There you are, on top of Bangkok! Perfect for adventure seekers, take some photos standing on the glass tray with a bird's-eye view of the beautiful city below. Plan your outfit wisely, as it gets a bit chilly up here, and you have to pull it off with unattractive shoe covers, which you must put on before stepping on the glass. The rooftop floor of King Power Mahanakhon has just been transformed into a new home for The Standard's sky-high bar, Sky Beach, which features a chic and retro interior and furnishings in white and yellow. Access to Mahanakhon Skywalk sets you back B836 and B250 per kid.

Samut Prakan City Observatory (bit.ly/3CDjJQ1) has just opened its doors to the public, inviting visitors to soak up the history of Samut Prakan for free until Oct 31. The 179-metre tower is built as a learning park with four distinct zones, including a kid's learning centre, the Samut Prakan museum, the public library and an observation deck. Explore every nook and cranny of the tower as each level features presentations and interactive exhibitions, offering an immersive experience to absorb history lessons. One of the highlights is a time machine simulator, which will take you back in time to the very beginning of the fortified city, also known as Samut Prakan nowadays. To get a full view of the Chao Phraya River and the city, head up to the sky deck on the 23rd floor, which features floor-to-ceiling windows. Running until Oct 31, visitors can learn about the local lifestyle of Samut Prakan from the past through a limited series of exhibitions named "The Stories of Pak Nam City," for which you must book your spot via bit.ly/3CCvgz3. 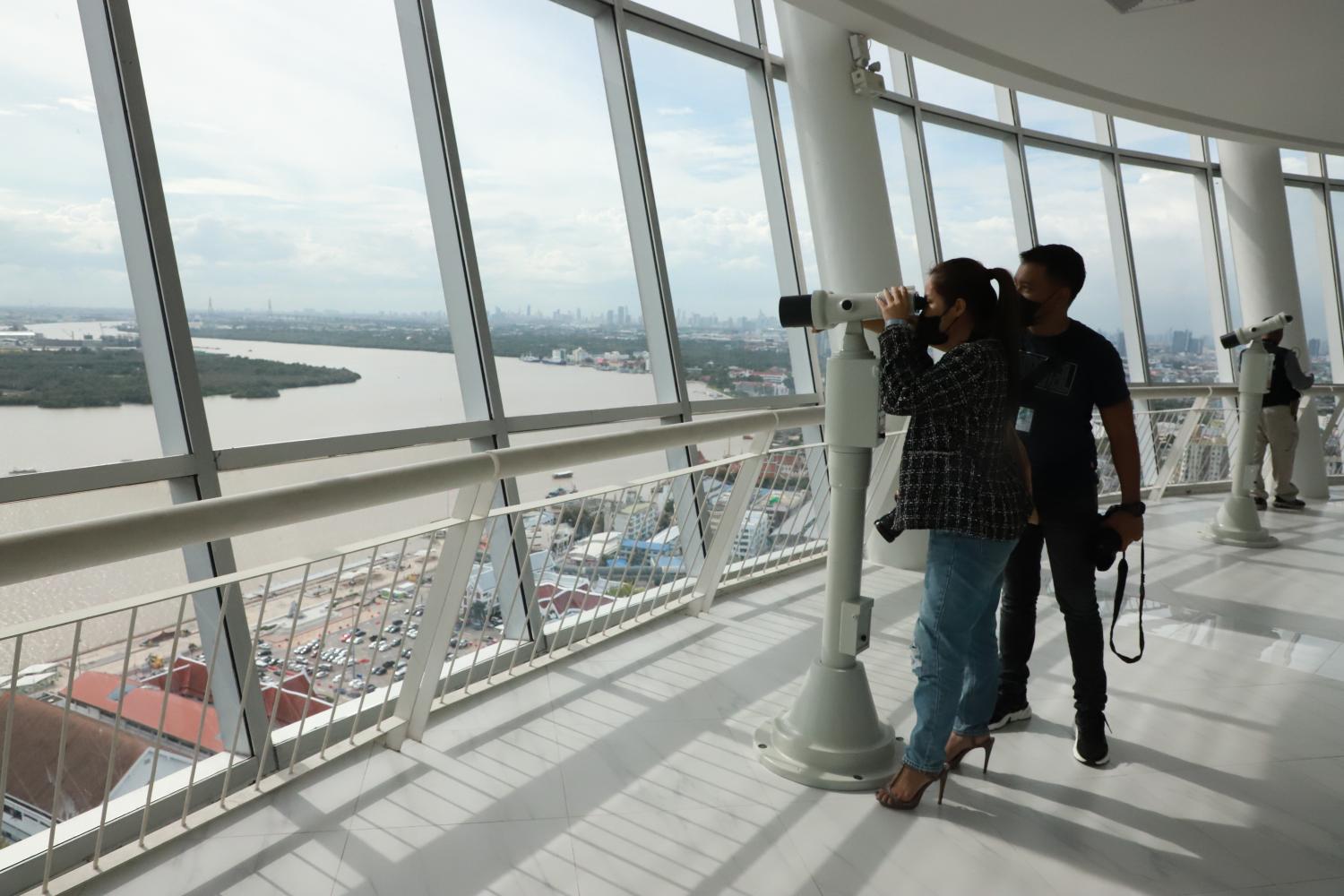 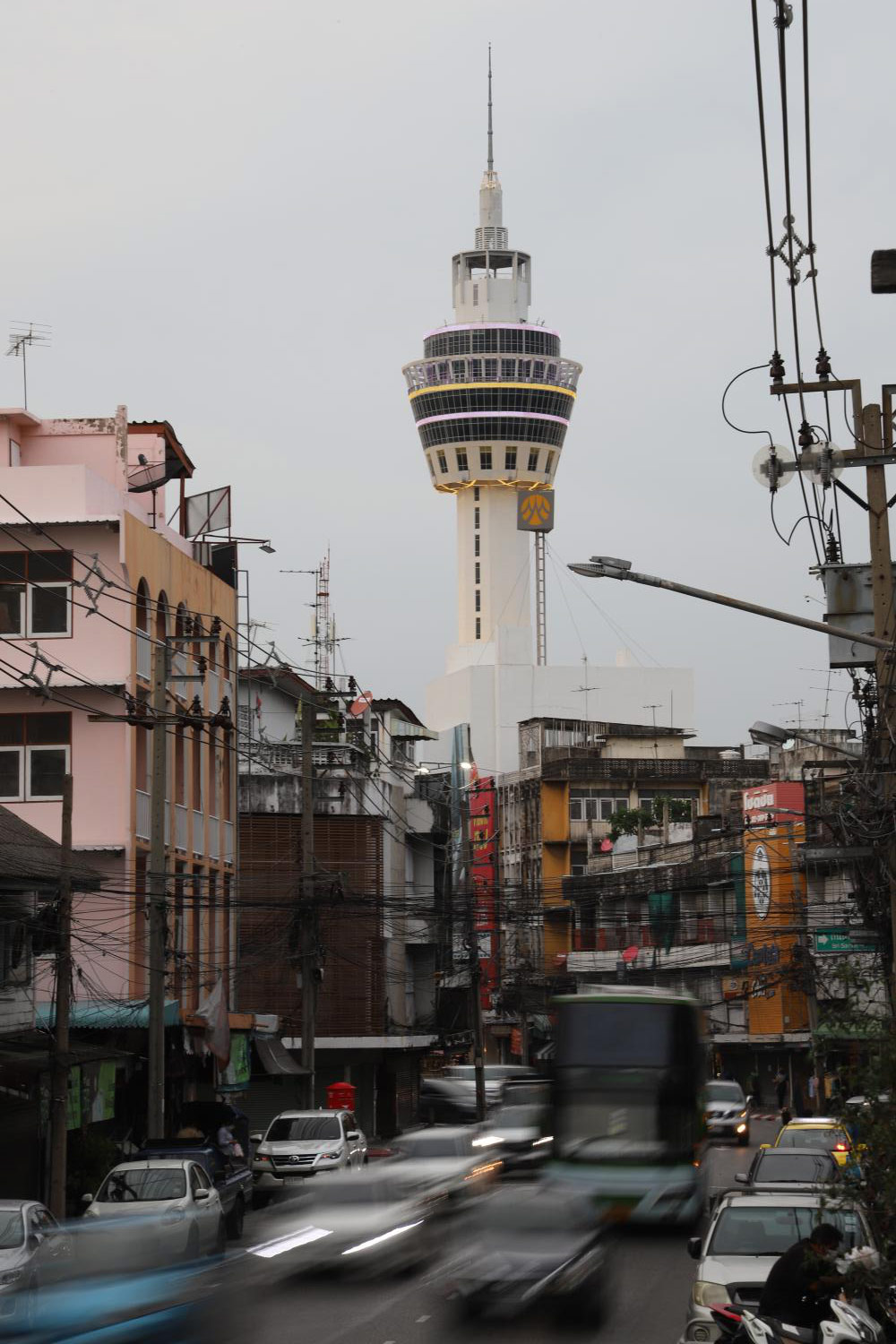 The breathtaking view of the coastal city is not only what visitors can indulge in when visiting Pattaya Park Tower (pattayapark.com) but also a delicious buffet. The seaside observation deck is a part of Pattaya Park Beach Resort, an entertainment empire on Jomtien beach, which also features amusement and water parks. After purchasing your ticket, which costs B150 per person, take a slow lift ride to the 55th floor of the tower, where you can gaze at the beauty of Jomtien Bay and Pattaya City. However, getting down from the sky deck is another thing as you can select your way back down to the ground, whether by the same lift or a few adrenaline-rush options. Think of taking a zip line or a sky shutter, choosing a stand or a seat cart, priced at B200 per ride. The tower also houses revolving restaurants on the 52nd, 53rd and 54th floors, featuring an international buffet lunch and dinner with seafood.

Yasothon's Phaya Khan Khak Museum looks unconventional compared to other observation decks. It catches all eyes with its giant toad-shaped building, standing guard over the Lam Thuan reservoir. As you might guess by the shape of the building, you will know what to find here -- it's a toad museum! With free entry, expect exhibitions trotting out different species of toads that can be found in Thailand and their importance to the ecosystem. Beyond the biology lesson, visitors can also go deep into the local folklore of Phaya Khan Khak, the myth of the Toad Prince, through an interactive exhibition and a 4D movie. It depicts his epic battle against Phaya Thaen, the rain god, to end a drought during the rice-growing season, which later became the origin of the Rocket Festival (Bun Bang Fai), celebrated among Northeastern people. Another highlight awaits on level five, where visitors can view a peaceful lake from the opening mouth of the giant toad. 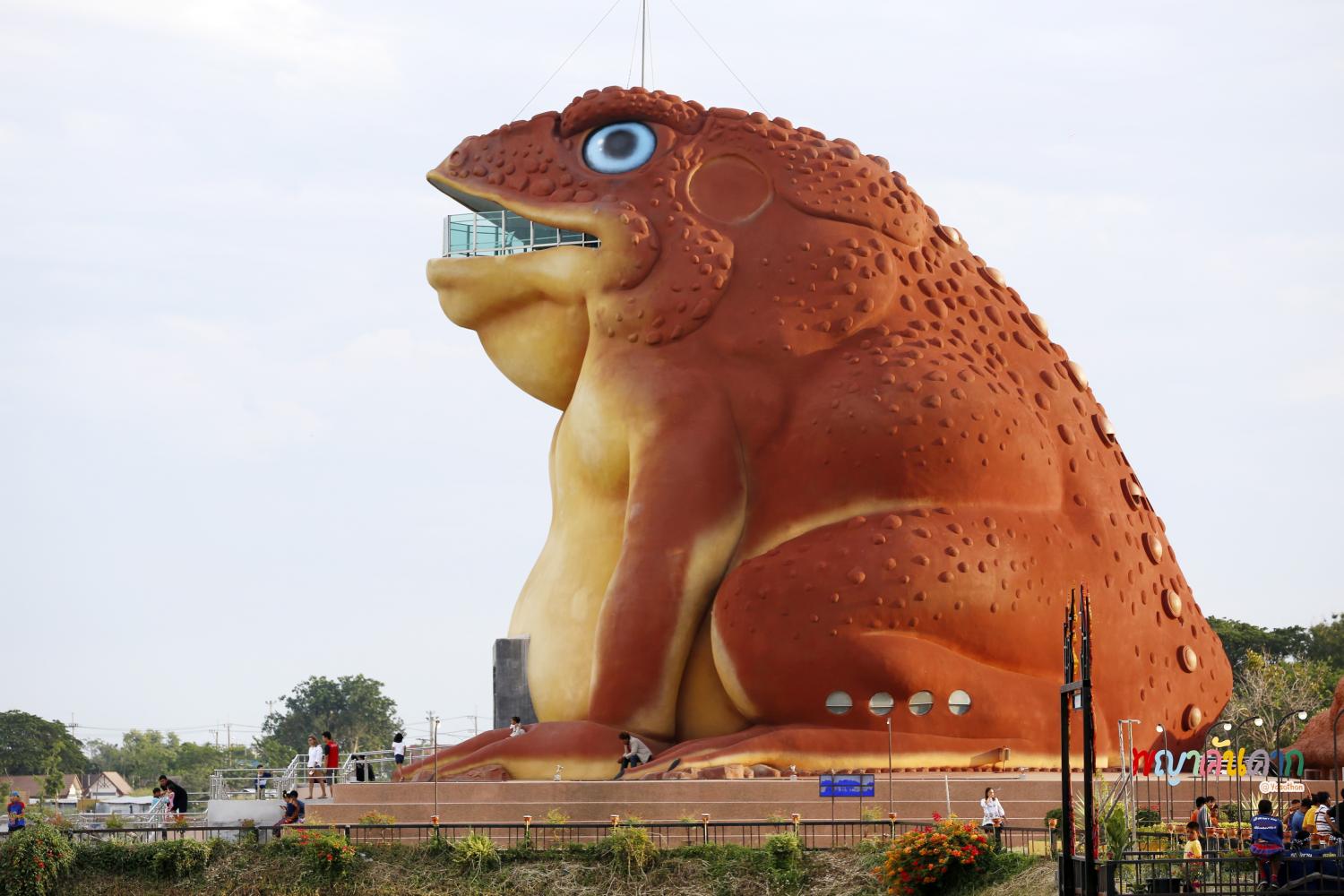 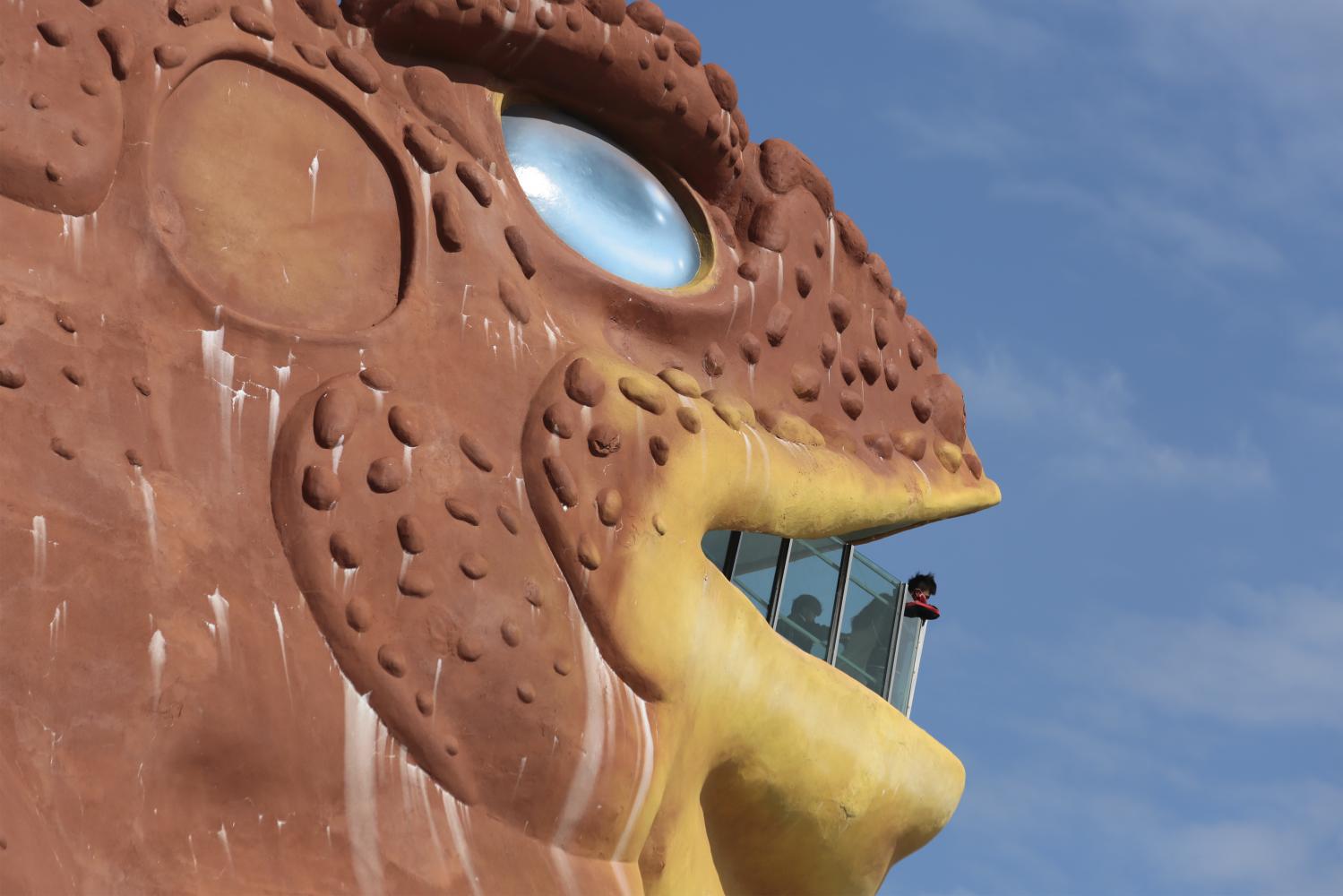 From a distance, Sri Lamduan Tower (bit.ly/3dSc5qy) looks quite secluded as the tower where Rapunzel, from Disney's animated film Tangled, is kept. A lofty tower stands tall amid dense trees in Chaloem Phra Kiat Park, which is a small, lush island in the middle of Huai Nam Kham reservoir. Visitors can only access the tower by the main entrance on a long, rustic footbridge. Sri Lamduan Tower features a learning centre where you can dig deep into the roots of Sri Sa Ket. On the 1st and 2nd floors, the historical exhibitions put you into the picture of Khu Khan City, the original name of Sri Sa Ket, and the history of the Khmer temples scattered around the province. It also features stories of Kha, Suay and Kuay, the minority ethnic groups who once roamed this Southern Isan region in the Ayutthaya period. Visitors can take a lift to the observation deck on the 16th floor to get a 360-degree panoramic view of Sri Sa Ket town, at 85 metres high. Another highlight worth checking out when visiting the park is Sri Sa Ket Aquarium. Within a few steps from the tower, you will find an air-conditioned building where you can enjoy creeping on fish found in the region while escaping from the heat outside. Tickets to the observation tower and aquarium cost B30 each for adults and B20 for kids. 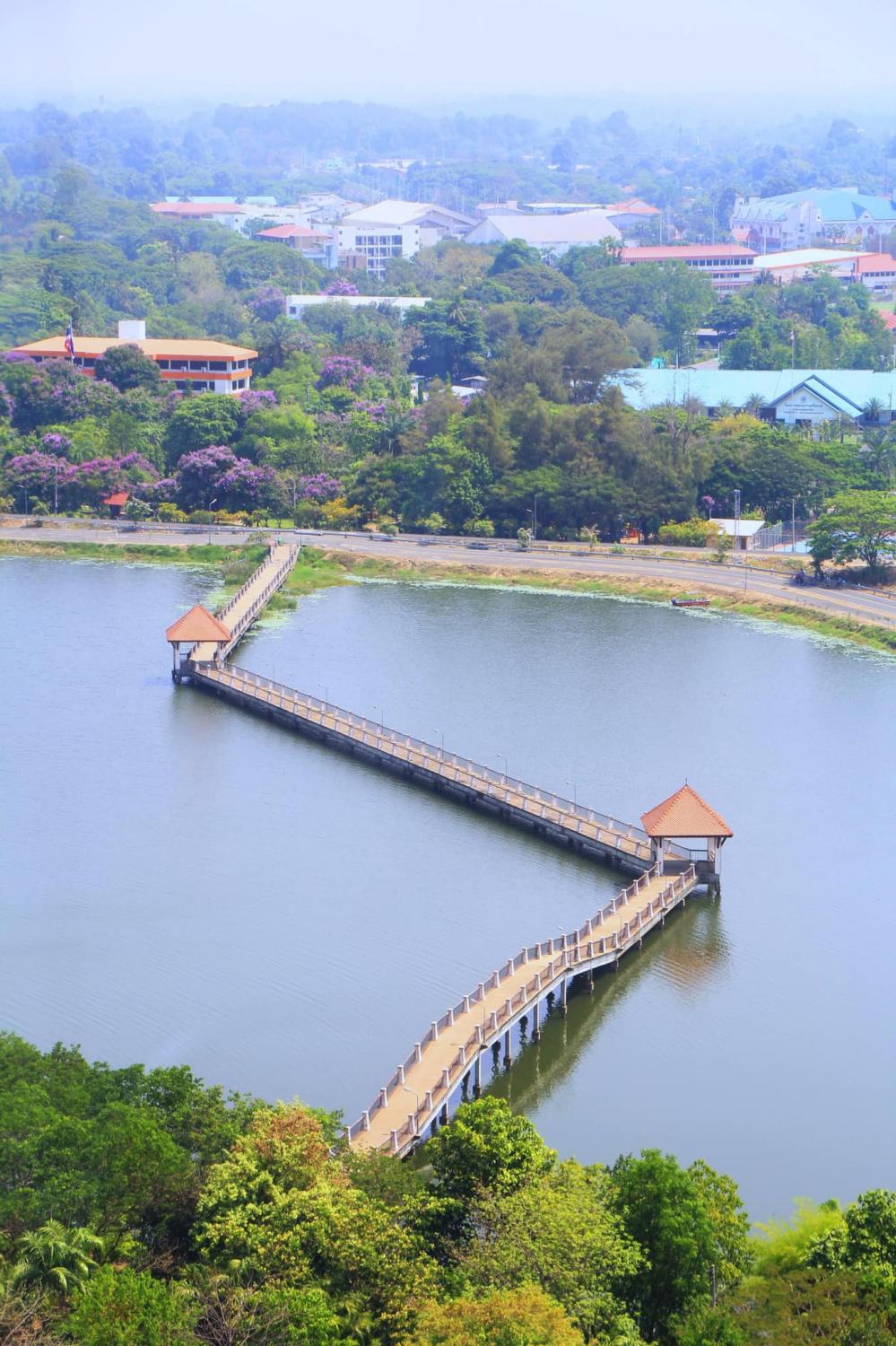 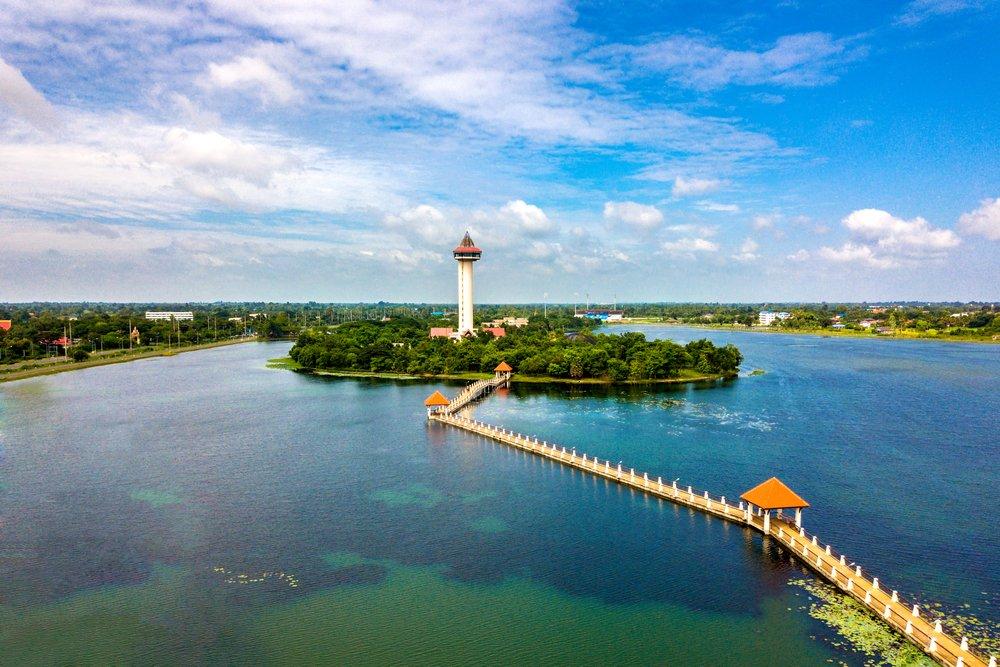 Contrasting the surroundings in downtown Nakhon Ratchasima is Terminal 21 Korat (terminal21.co.th/korat) and its towering sky deck, which stands out in its contemporary exterior, evoking a glimpse of an airport building with an air traffic control tower. If you have visited other Terminal 21 branches, you will not be surprised why they have been done up in this style on both the interior and exterior of the shopping complex. Inside the mall are plenty of replicas of landmarks that await visitors to strike some poses with. However, we want to highlight Terminal 21 Korat's Sky Deck rather than those photogenic spots. The tower soars to 110 metres high, with two indoor observation decks. It is designed as a flight control tower, with a playful, distinguished interior in an airport terminal theme. Visitors can check into the observation decks for free at a counter on the 5th floor. Various tourist attractions in Nakhon Ratchasima are visible from the observation decks, from which you can get a closer look at them through tourist telescopes. At night, the towers will be lit up with dynamic facade lighting, offering a photogenic background for your instaworthy posts. 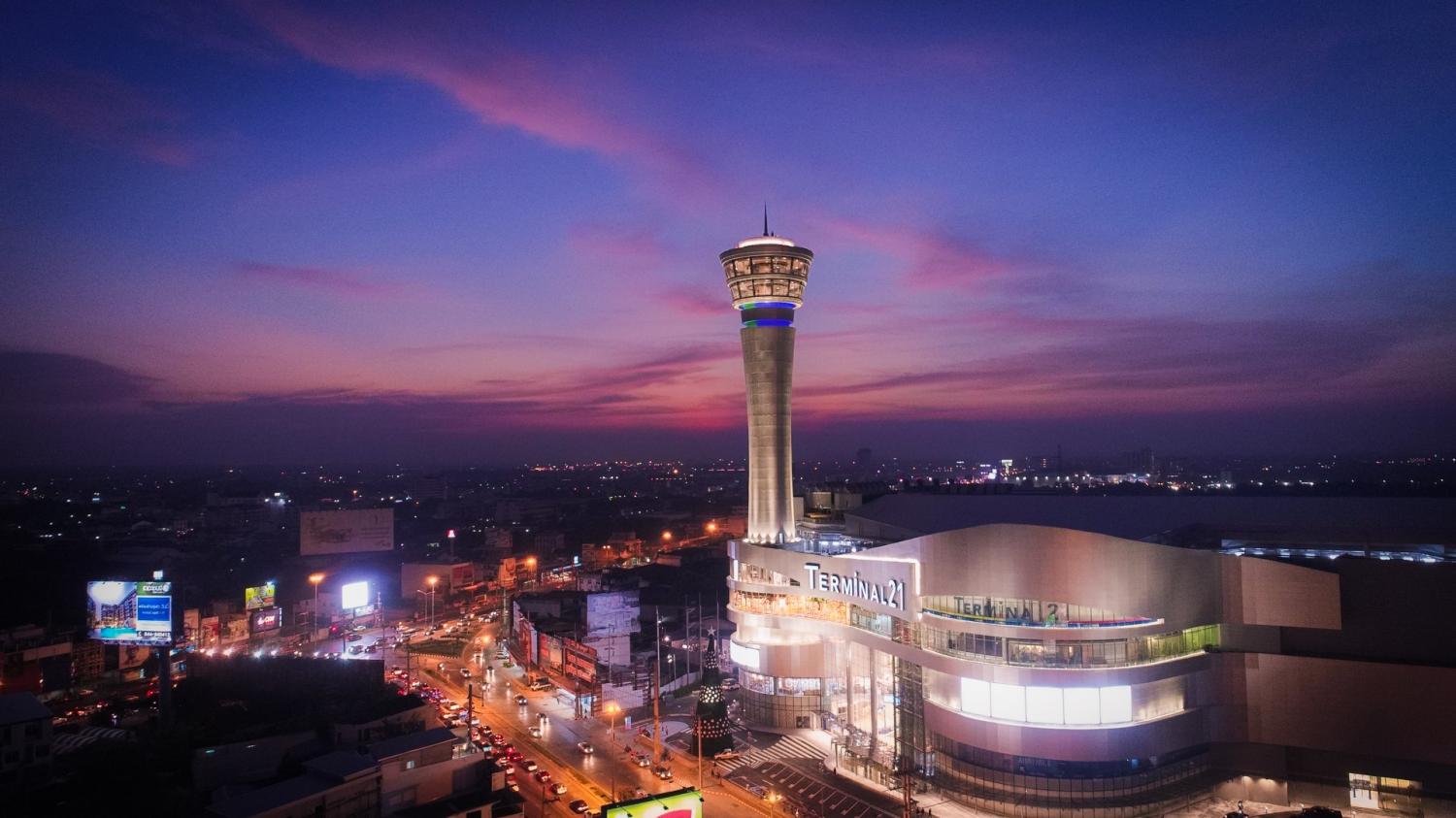 Roi Et Tower (roiettower.com) raised its curtain earlier this year, hitting a high note on the Isan skyline in the structure of a traditional instrument. Roi Et Tower, or Hor Wot 101 as locals call it, acts as a landmark in downtown Roi Et City, catching all eyes with its exceptional building shape of a Wot, a wooden circular panpipe widely used in Pong-Lang ensembles of the Northeastern region. The tower's height is built around the province's name, which is one hundred and one (101). Visitors can explore the history of Roi Et on each level of the tower, while the 34th floor is an observation deck that offers a view of panoramic skylines looking over the downtown areas and Somdet Phra Srinagarindra Lake Park. Tickets are priced at B50 for adults and B30 for students. 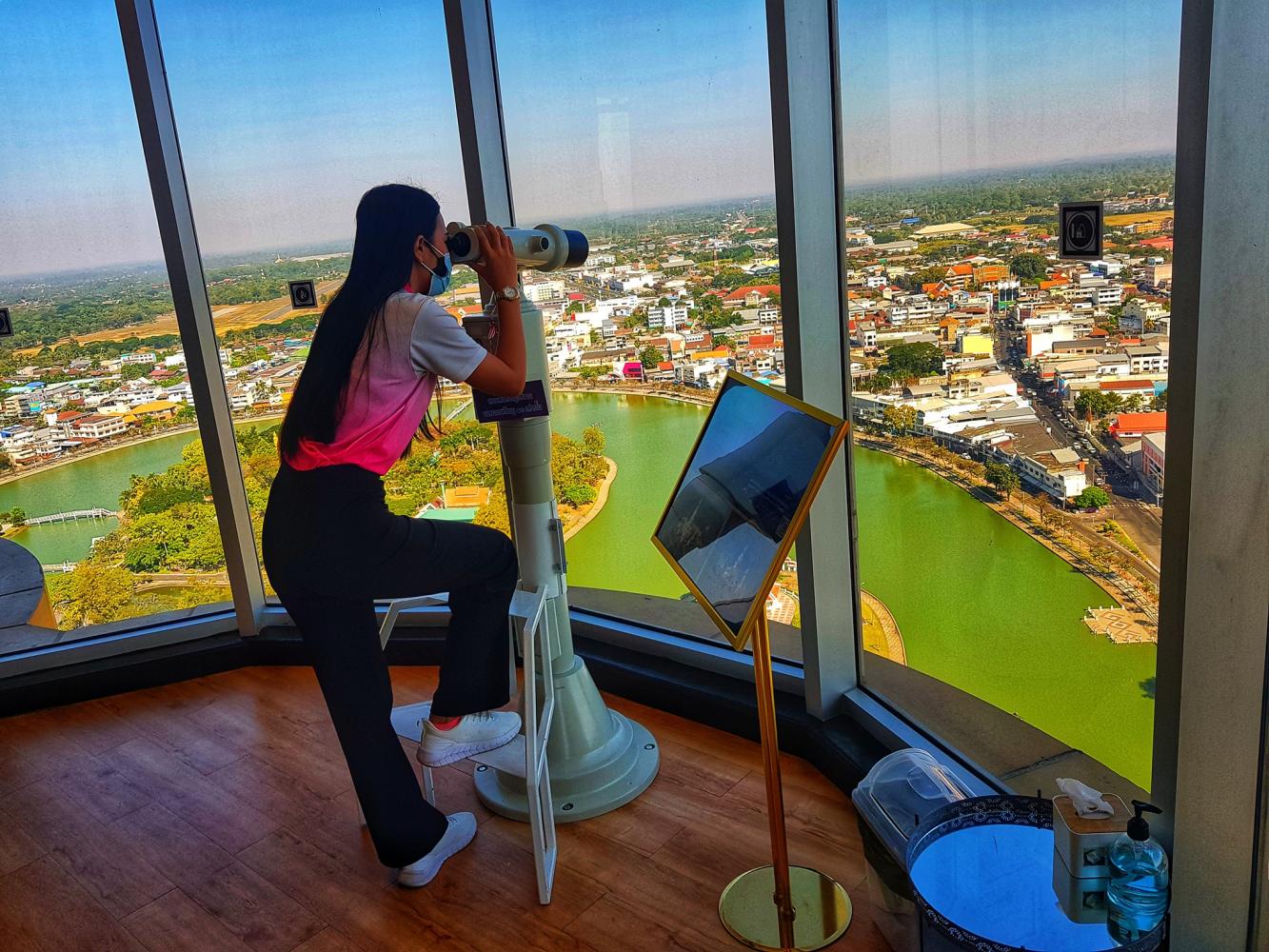 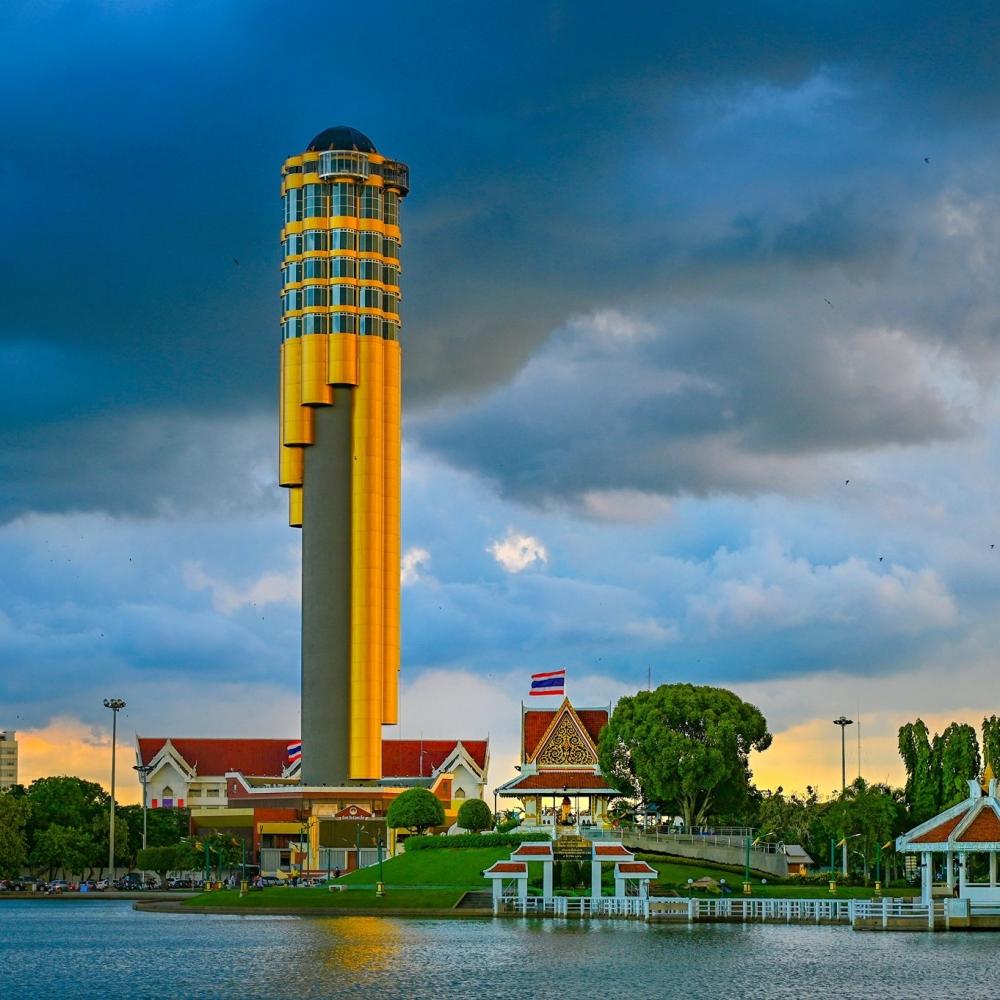