In the footsteps of the Buddha
Travel

In the footsteps of the Buddha

Once the epicentre of Theravada Buddhism, the ancient region of what is now Sri Lanka had extended its border to Siam through the Buddhist faith. Its spiritual journey marked its beginning during the Dvaravati era (6th–11th centuries) and culminated with the adoption of Buddhism in Nakhon Si Thammarat, Sukhothai, Ayutthaya and Lanna.

A group of Siamese monks travelled to various religious historical sites in the Ceylon kingdom to follow Lord Buddha's footprints and their voyage was widely depicted in murals or on scripture cabinets.

During the time of King Songtham (1610-1628), the royal chronicle described a pilgrimage to Sri Lanka and the discovery of Lord Buddha's imprint on a stone slab atop Suwan Banphot Hill in Saraburi. This find confirmed the tradition of Buddha's footprint that pilgrims had heard in Sri Lanka.

In contrast, life seems like an up-and-down carousel. Internal instability undermined the kingdom, therefore it strove for survival by sending diplomatic delegations to Ayutthaya in an attempt to resurrect the traditional Buddhist way of life in its homeland.

During the reign of King Boromakot, Ayutthaya grew into a booming maritime trade port, attracting sea traders from all over the world. Simultaneously, a string of magnificent temples with the finest architectural art were constructed as a testament to the grandeur of Thai culture, history and Buddhism, reflecting the ties between Siam and Sri Lanka.

However, the Sukhothai, Lanna and Ayutthaya kingdoms laid the foundation of Siam in the 18th-19th Buddhist centuries by embracing Theravada Buddhist doctrines, scriptures, traditions and Pali language. All of these have been influenced by Ceylon.

To commemorate the connection between Sri Lanka and Thailand, the Chao Sam Phraya National Museum recently hosted a day excursion to visit historical sites so that future generations can learn about the history and the origins of Buddhism via astonishing religious art.

"Sri Lanka is a model of early Ayutthaya Buddhist art. We can see how religious structures evolved from Khmer or Hindu-style stone palaces to stupas. Sri Lankan pilgrims believe Lord Buddha visited Sri Lanka three times and visited 16 holy places, making it an important pilgrimage destination for Buddhist believers. At the same time, all of these locations also encouraged artists to create religious art during the Ayutthaya period," said Assoc Prof Rungroj Thamrungrueng, head of the Department of Art History at Silpakorn University. 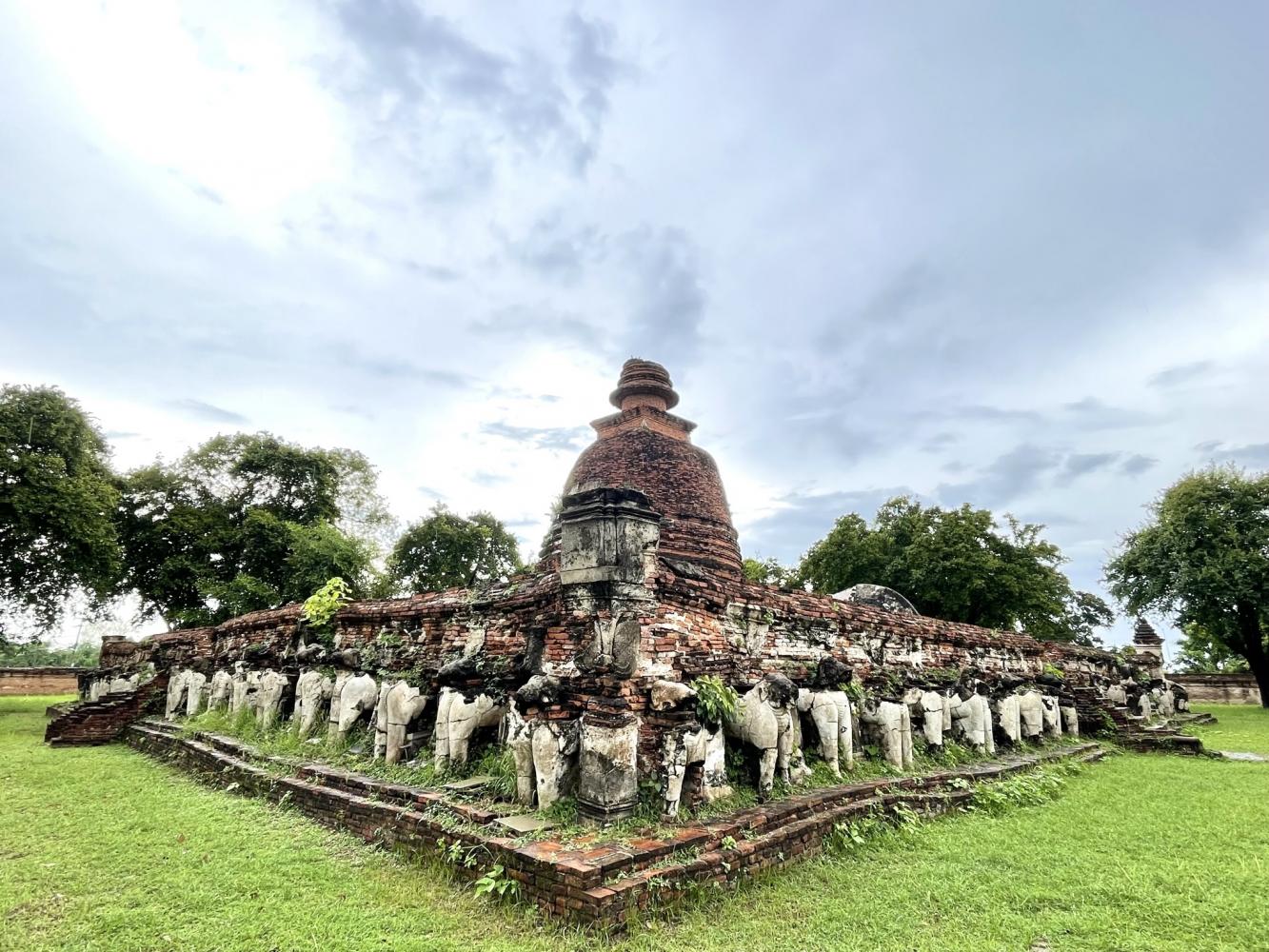 "One of them is to ascend Samantakuta [known as Adam's Peak and Sri Pada], which houses the hallowed footprint of the Buddha. During the Sukhothai period, we imitated this footprint in Sukhothai, Sri Satchanalai and Nakhon Sawan, while murals at Wat Phutthaisawan in Ayutthaya depict a footprint on Samantakuta standing on a lotus and covered in gold leaves. Also, the series of Tribhum pictorial books in the Ayutthaya period chronicle Samantakuta and the Buddha's footsteps."

Our visit began at Wat Maheyong, erected by King Borom Rachathirat II (also known as Chao Sam Phraya) and influenced by Ceylonese art. Standing outside the city island, it underwent many restorations and was left abandoned following the fall of the Ayutthaya kingdom before the Fine Arts Department added this temple to the list of national ancient monuments in 1955.

After passing down a long brick hallway, we came to a timeworn Ayutthaya-style ubosot, which stands in the middle and has a base formed like a junk to transport Buddhist pilgrims through the circle of life. It was renovated during the late Ayutthaya period and retains its original structure, with ancient techniques utilised to build the walls that support it.

Deeper, the monastic compound is home to a ruined elephant-based stupa with a collection of Buddha sculptures housed on its grounds for clockwise circumambulation. Their designs are believed to have been inspired by Mahiyangana Viharaya, the ancient temple in Mahiyangana, and Ruwanweli Maha Seya, the sacred stupa in Anuradhapura that houses the Buddha's relics.

"In addition to Wat Maheyong, King Borom Rachathirat II constructed Wat Ratchaburana in the middle of the island to store Buddha's relics. Influenced by Sri Lanka's Mahiyangana Viharaya, the bell-shaped stupa was a popular design during the Sukhothai and early Ayutthaya periods," Rungroj said. 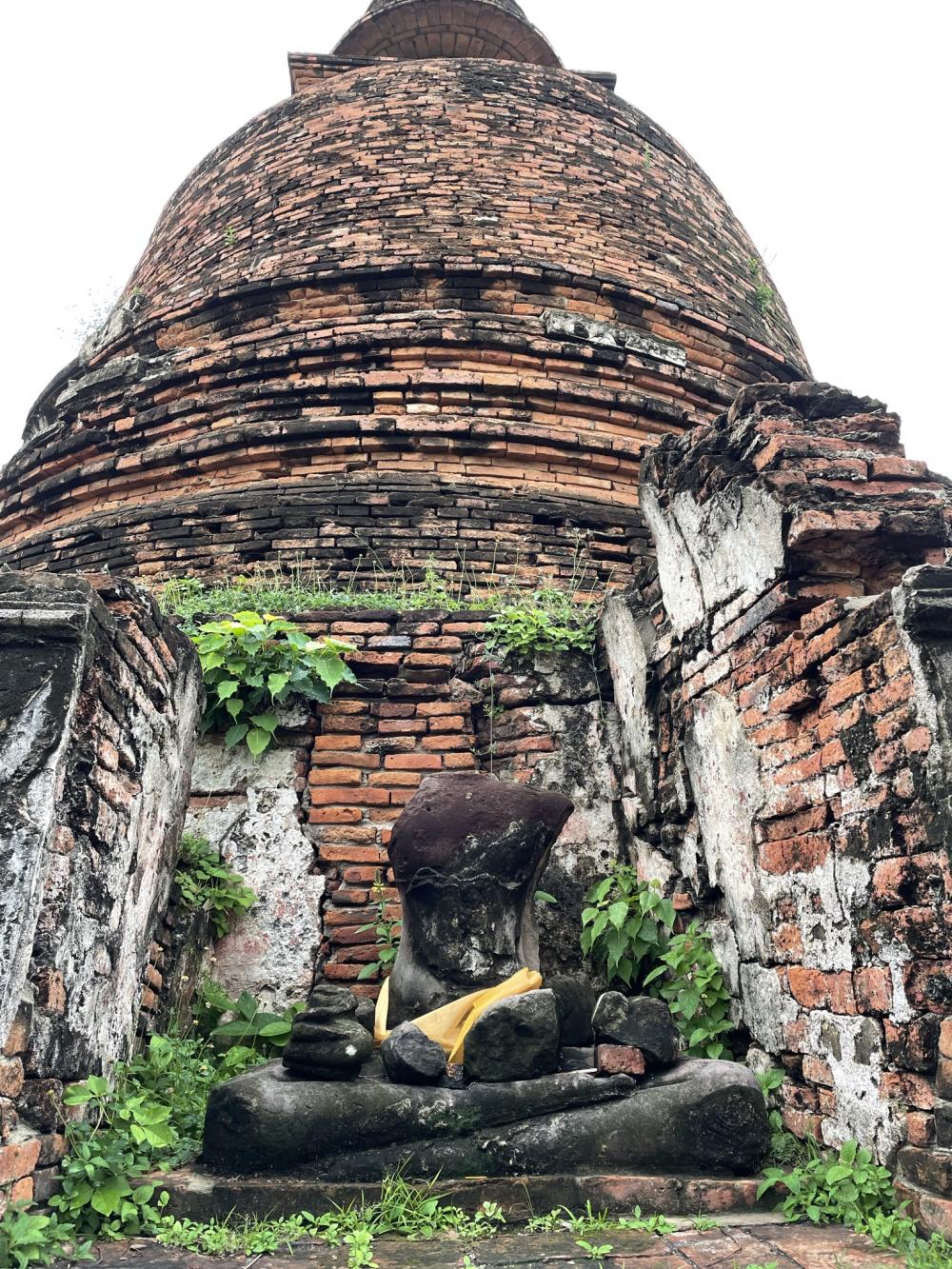 "Elephant sculptures were created to guard or honour the Buddha's relics, which were housed in the basement. According to Buddhist belief, wherever the Buddha is, that is the centre of the cosmos."

Wat Chang is a short walk from Wat Maheyong and is surrounded by verdant grasslands, where a group of elephants provide tourists with a delightful trip around Ayutthaya island. We hiked down several bridges and muddy paths to the ruins of the country's tallest stupa, which had elephant-like sculptures at its base. The two stupas at Wat Maheyong and Wat Chang represent a link between Buddhist beliefs from Sri Lanka.

"This massive stupa is supposed to have been built by a monarch. It stands parallel to another at Wat Maheyong and is related to the core of a stupa at Wat Ratchaburana. It has a large ground and is bigger than the well-known one in Sri Satchanalai. This symbolises our idea of duplicating a spiritual spot in Sri Lanka," Rungroj explained.

"This might be a replica of Mahathupa, and when the architectural style of an elephant-based stupa became unpopular in the late Ayutthaya period, all elephant sculptures were torn down and buried at the foot instead."

A 15-minute drive leads visitors from Wat Chang to Wat Worapho, which is situated on Khlong Tho Road. Formerly known as Wat Rakhang, it's unknown when this temple was built but King Songtham used to live here before ascending to the throne.

During the reign of King Boromakot, Siam dispatched monks to Sri Lanka to restore diplomatic relations, and they returned with a sampling of the Maha Bodhi Tree. After a bodhi tree was planted here, the temple was renamed. There is also a ruined stupa flanked by Buddha sculptures, a cloister and four stairways on view. 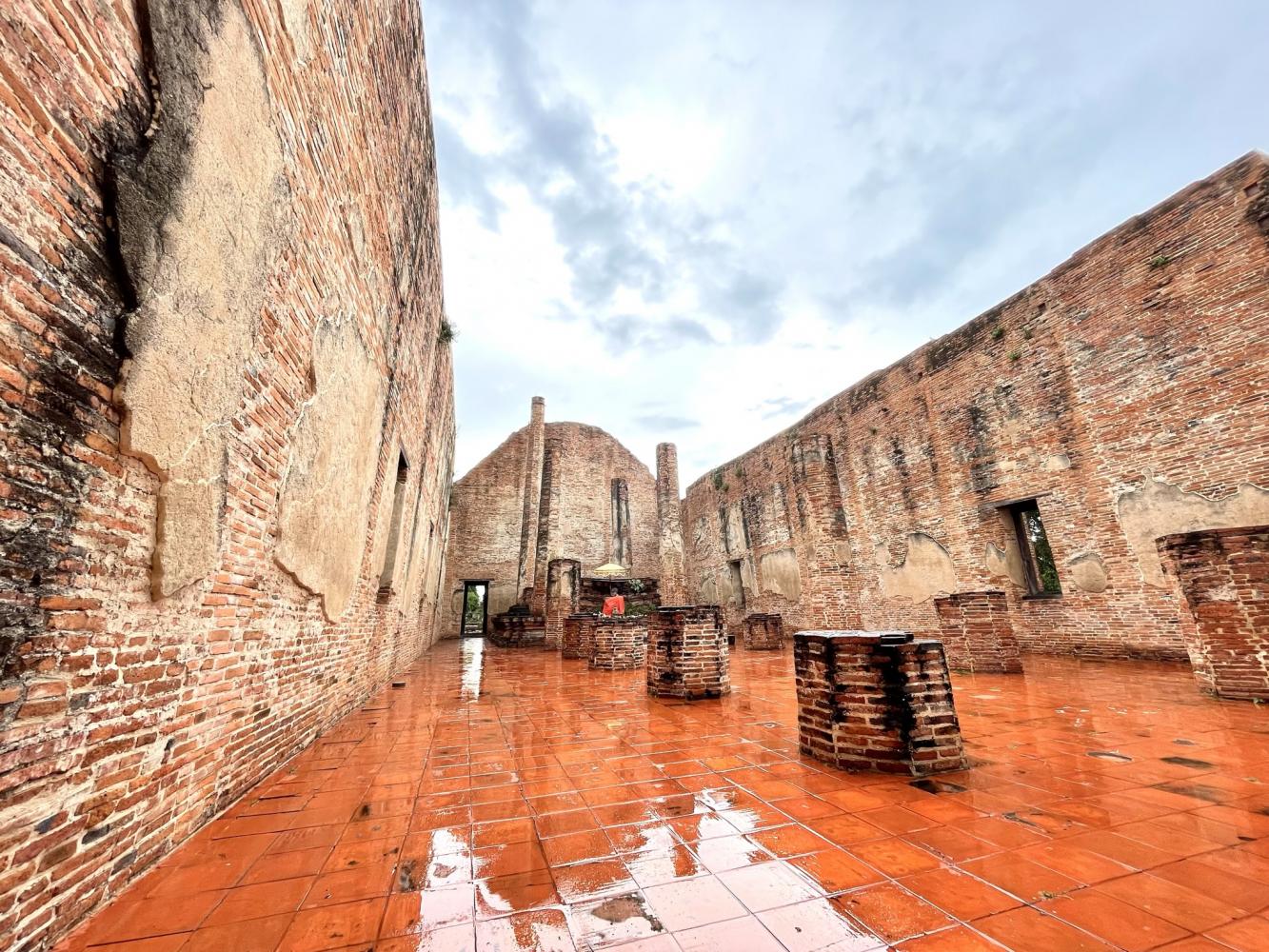 A historical Ayutthaya-style ubosot at Wat Maheyong has a junk-like base to transport Buddhist pilgrims through the circle of life.

According to mythology, after Buddhism was fully established in the land, Phra Sankhamitta Theri, daughter of King Ashoka, brought a sapling of the holy bodhi tree for planting at Maha Viharaya in Anuradhapura, Sri Lanka. As Buddhism spread from Sri Lanka, more saplings of the tree were planted in temples throughout the island and in countries that adopted Buddhism.

"A bodhi tree is a holy plant since the Buddha attained enlightenment while sitting against it. Around 2,000 years ago, when there was no Buddha statue, Buddhists worshipped the bodhi tree, which represented the Buddha. In Thailand, we planted bodhi trees in various temples in the Sukhothai period as well as during the reigns of King Rama II to Rama IV," Rungroj said.

Just a 3km drive from Wat Worapho, our tour ended at Wat Dhammaram, which was constructed in the Ayutthaya period. Situated on the west banks of the Chao Phraya River, its sermon hall was built in the late Ayutthaya architectural style and was refurbished during the Rattanakosin period, while the main pagoda stands on a square base and is encircled by small pagodas on the four corners.

The walls in a nearby scripture hall are covered with tempera paintings depicting the Buddha's life, angels gathered to listen to sermons and a portrait of King Chulalongkorn. The Phra Upali Maha Thera Museum, on the other hand, opened in 2013 to commemorate the 260th anniversary of the establishment of Siam Nikaya (Siam-Lanka Wongse) in Sri Lanka.

Inside, visitors will be transported back to the glorious days of the Ayutthaya empire to see how Buddhism spread to Siam and how Thailand adopted Buddhist religious art and traditions from Sri Lanka. There's a mini-theatre with an animation screening that makes guests feel like they're boarding a junk and travelling to Sri Lanka with Phra Upali Maha Thera. 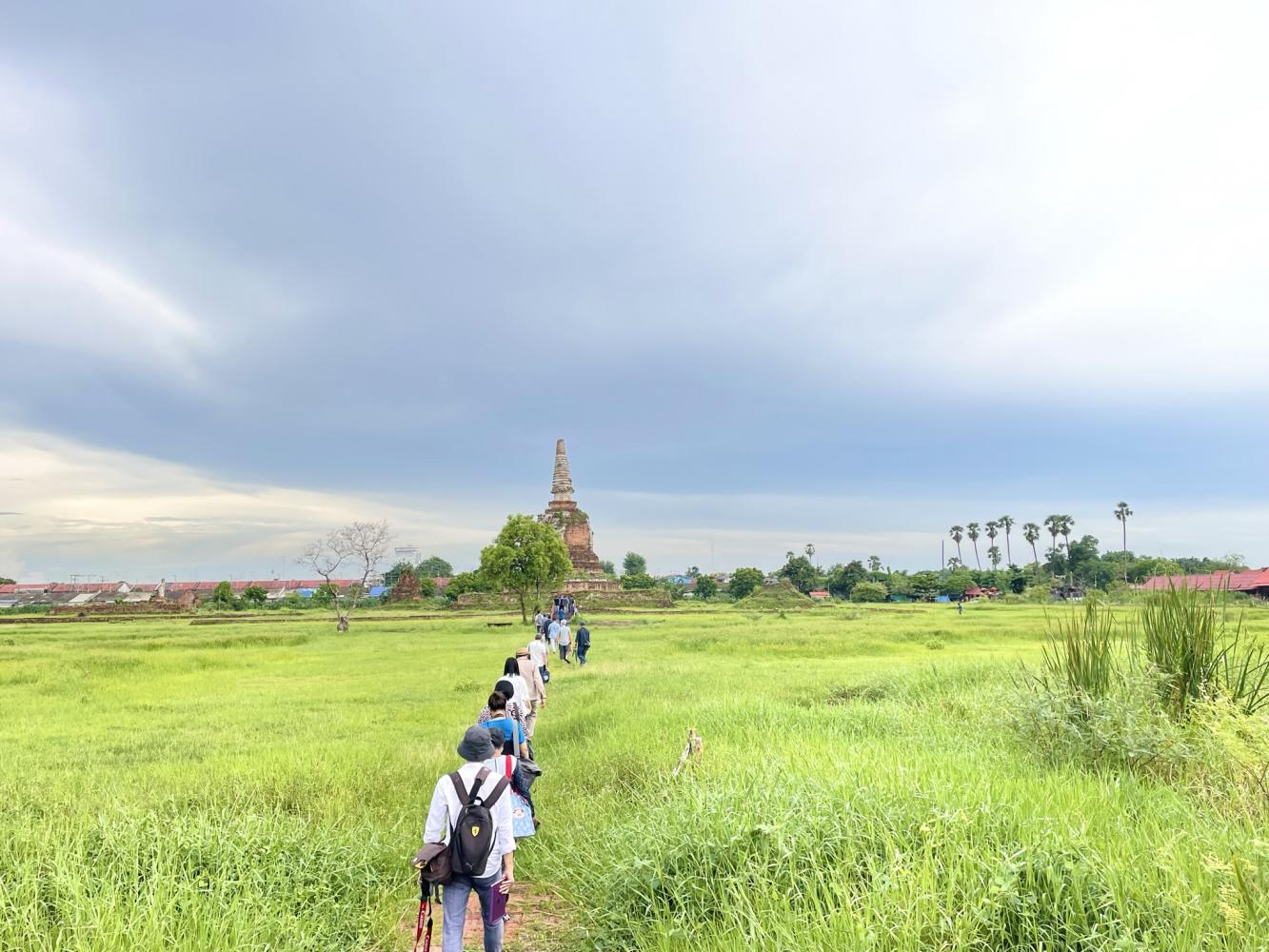 Wat Chang is home to the largest elephant-based stupa in the country. 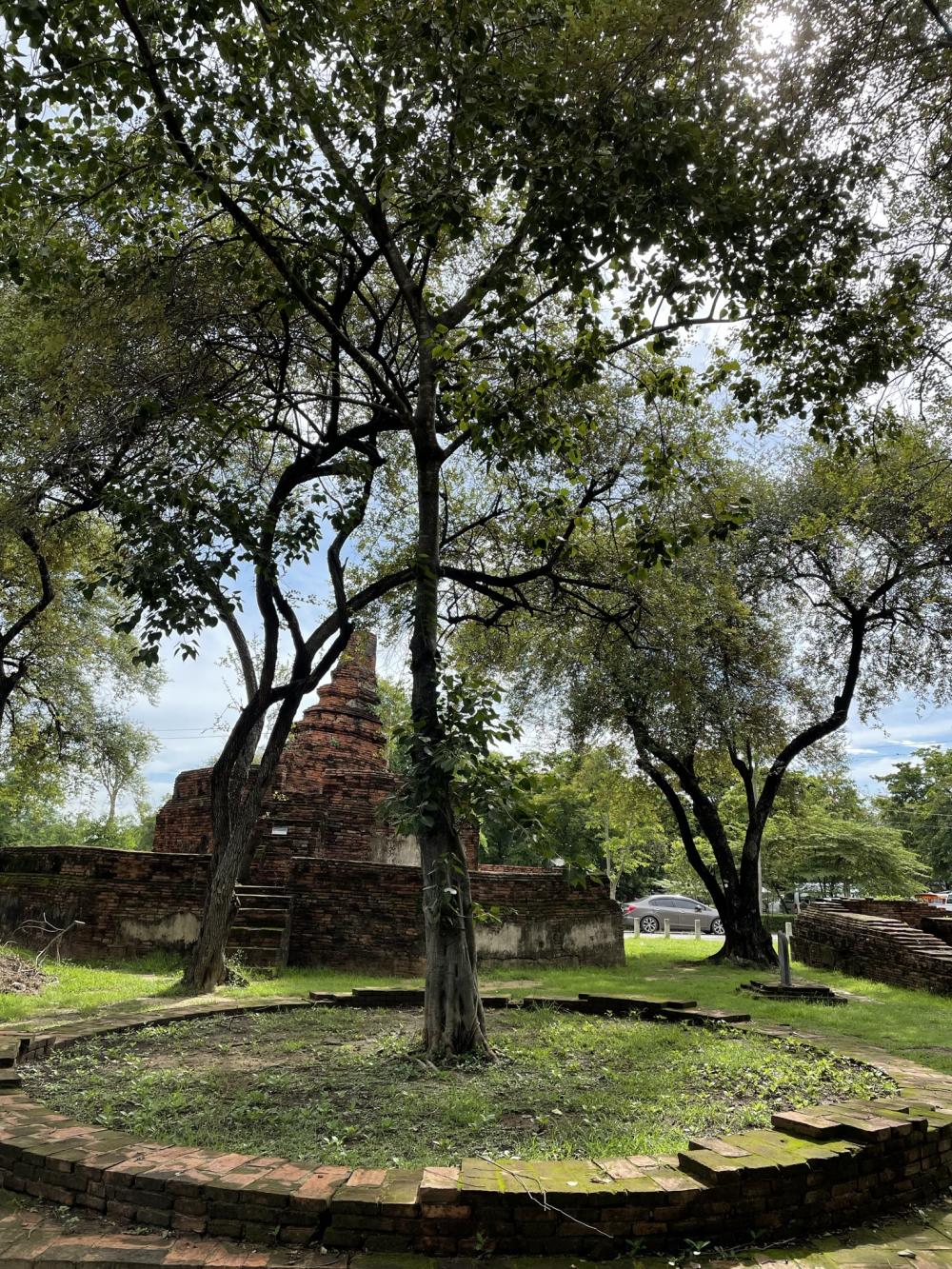 A sapling of the Maha Bodhi Tree from Sri Lanka was planted at Wat Worapho. 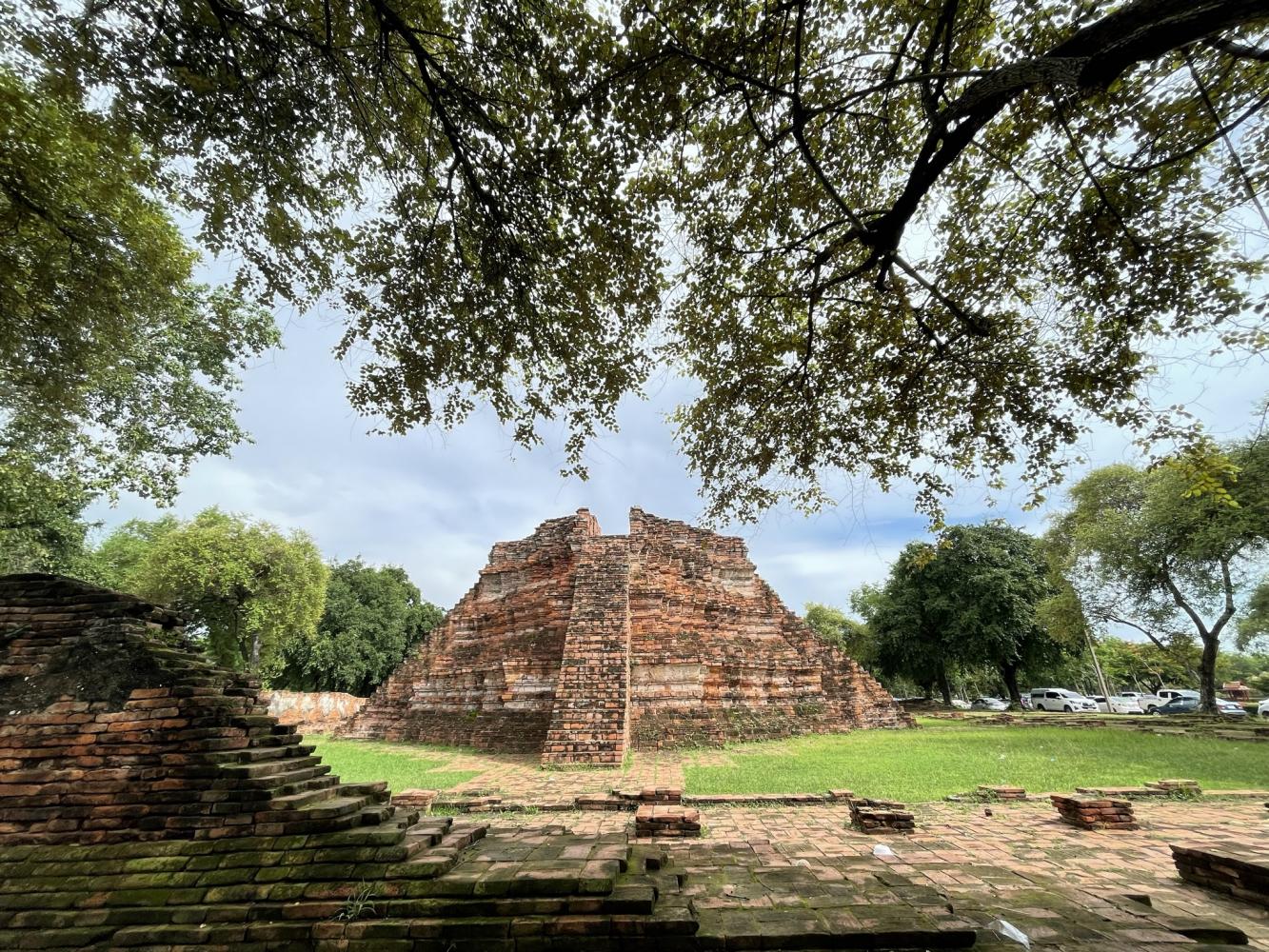 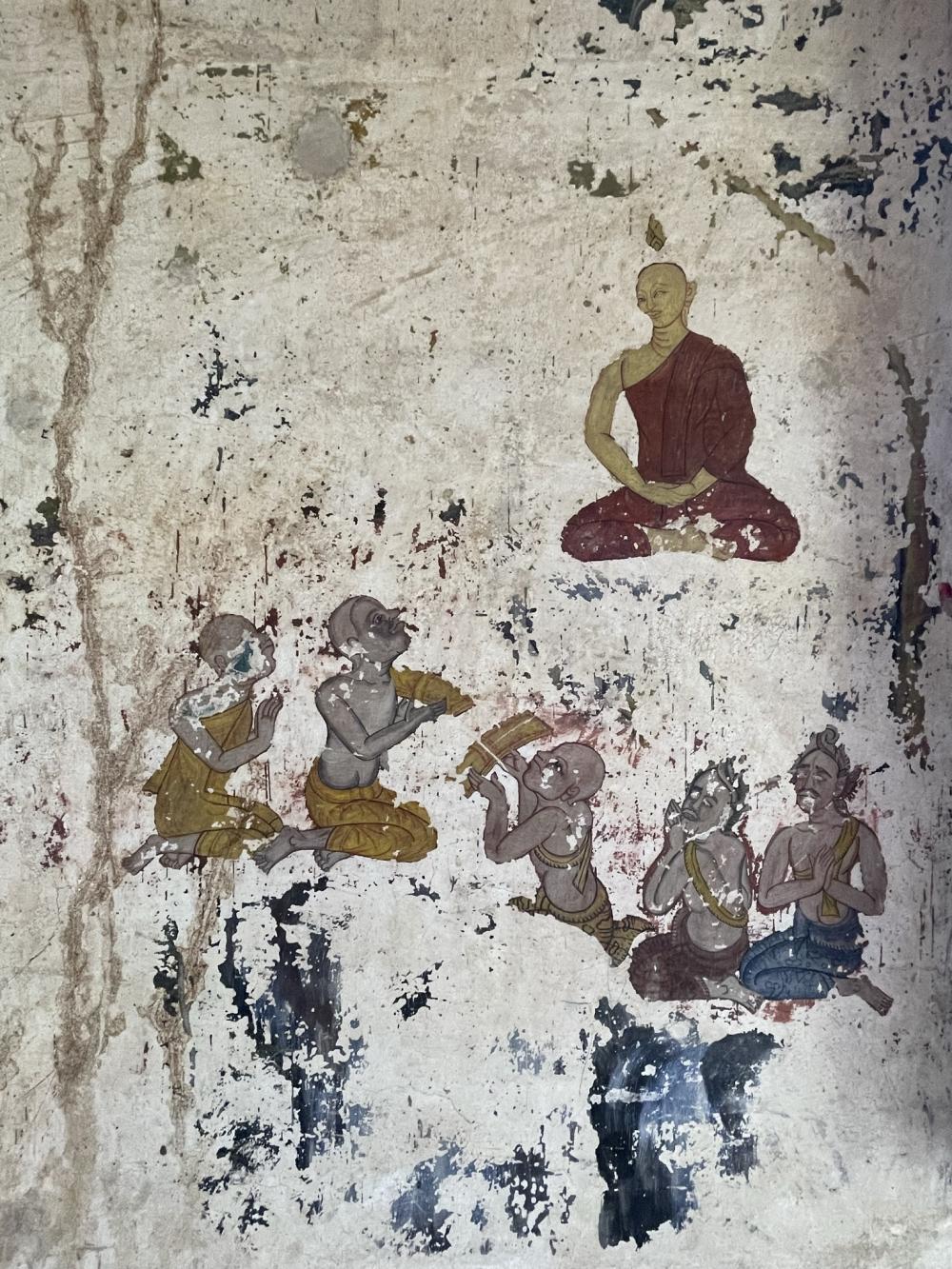 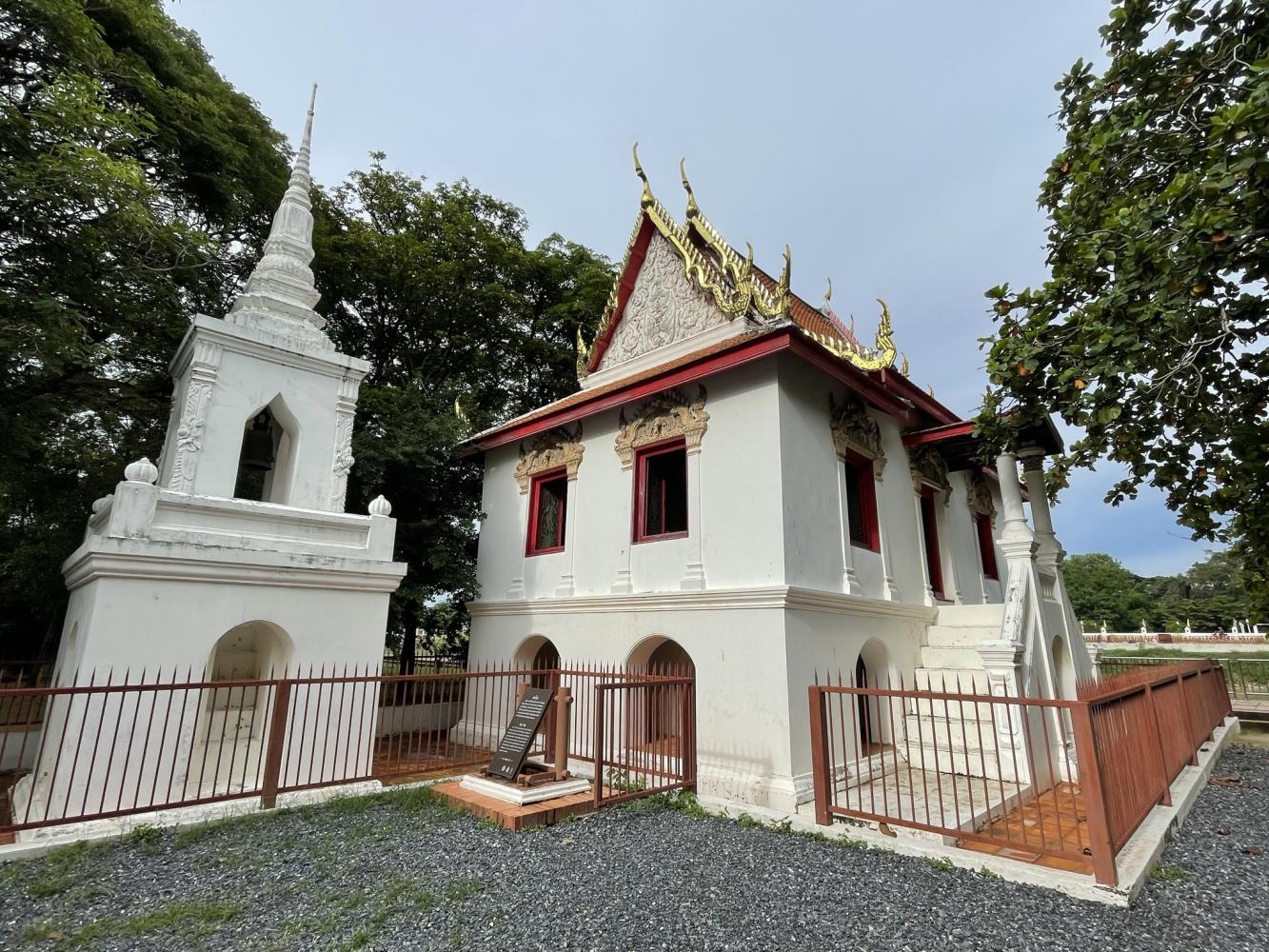 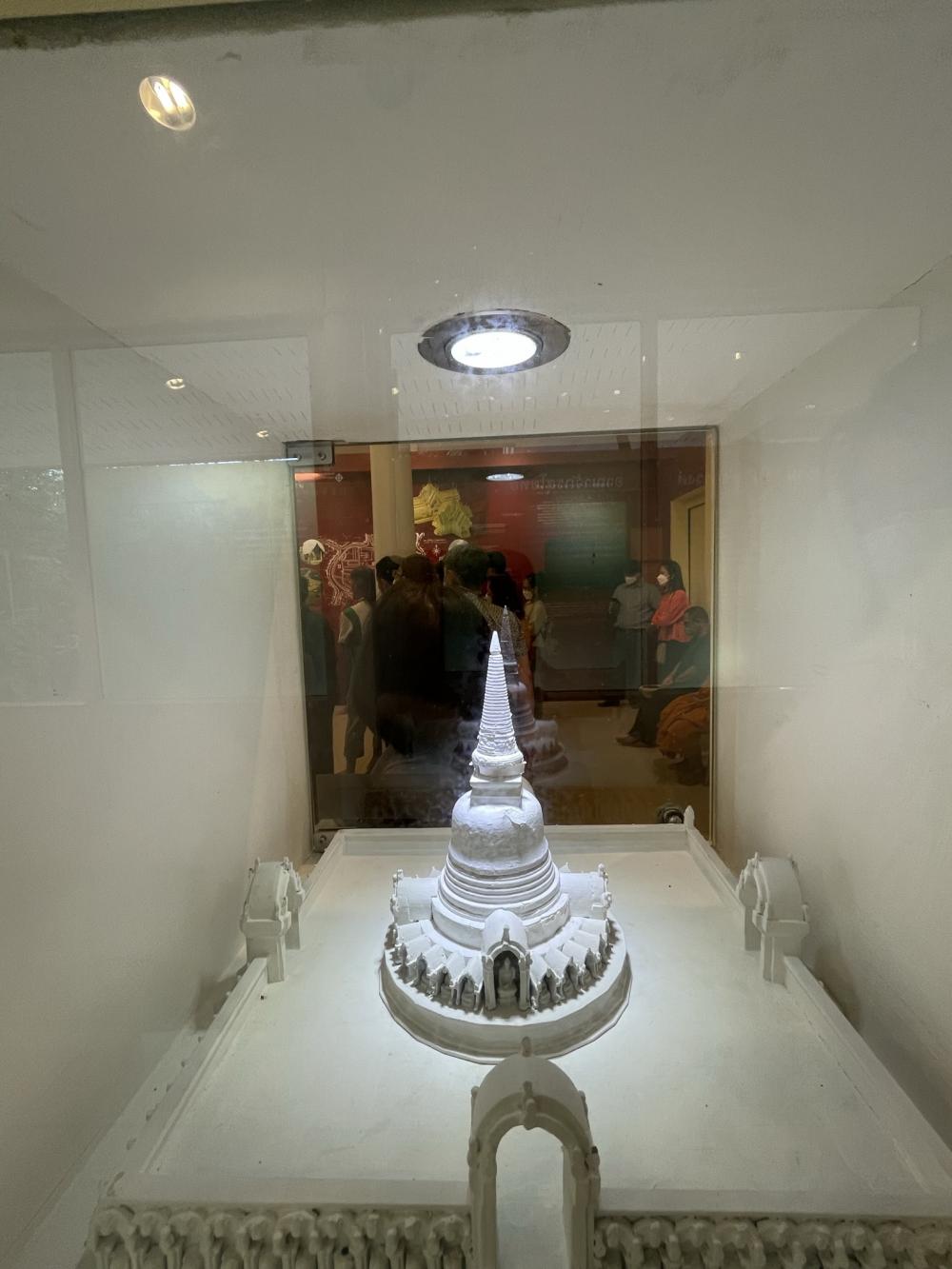 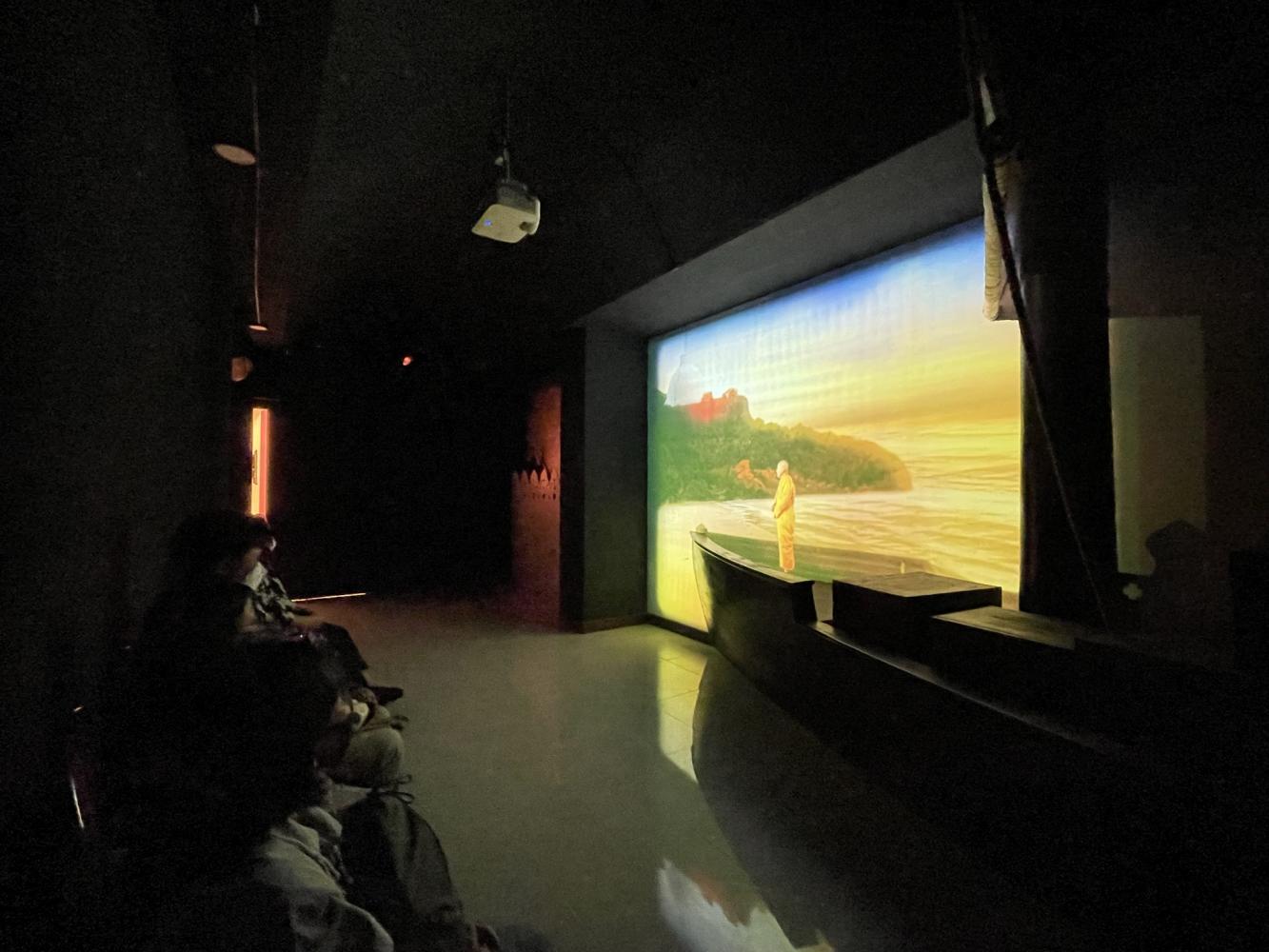 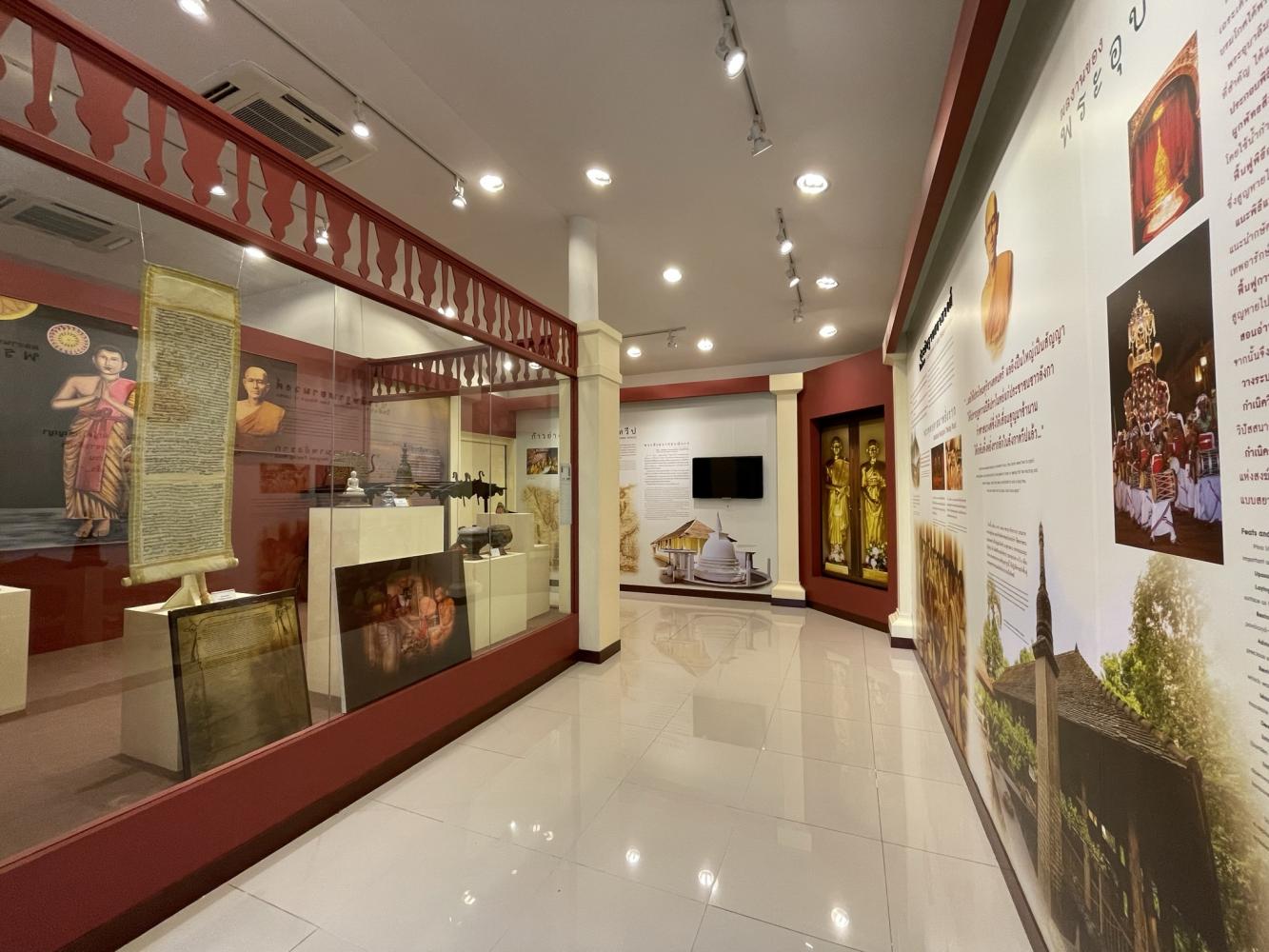 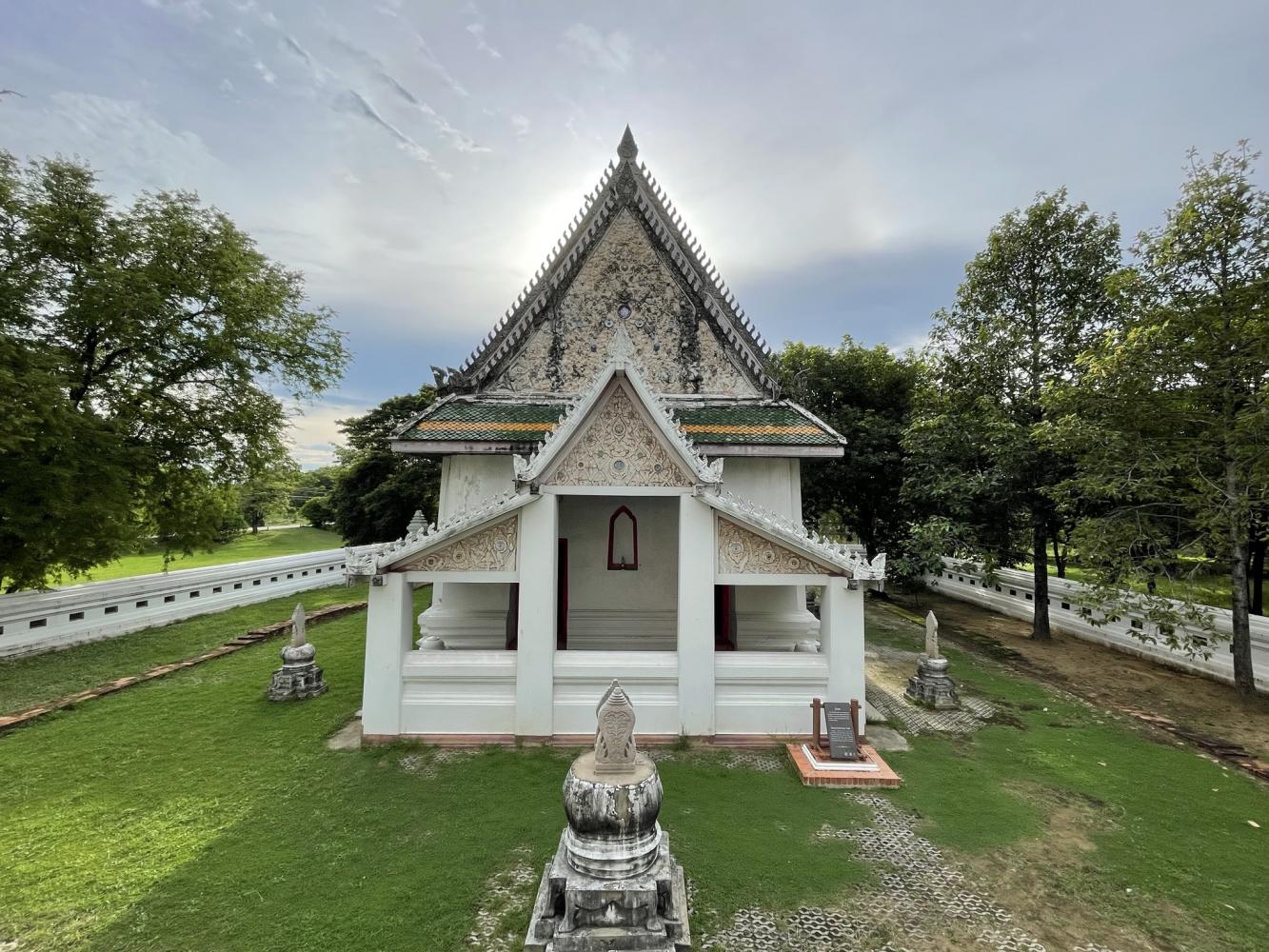 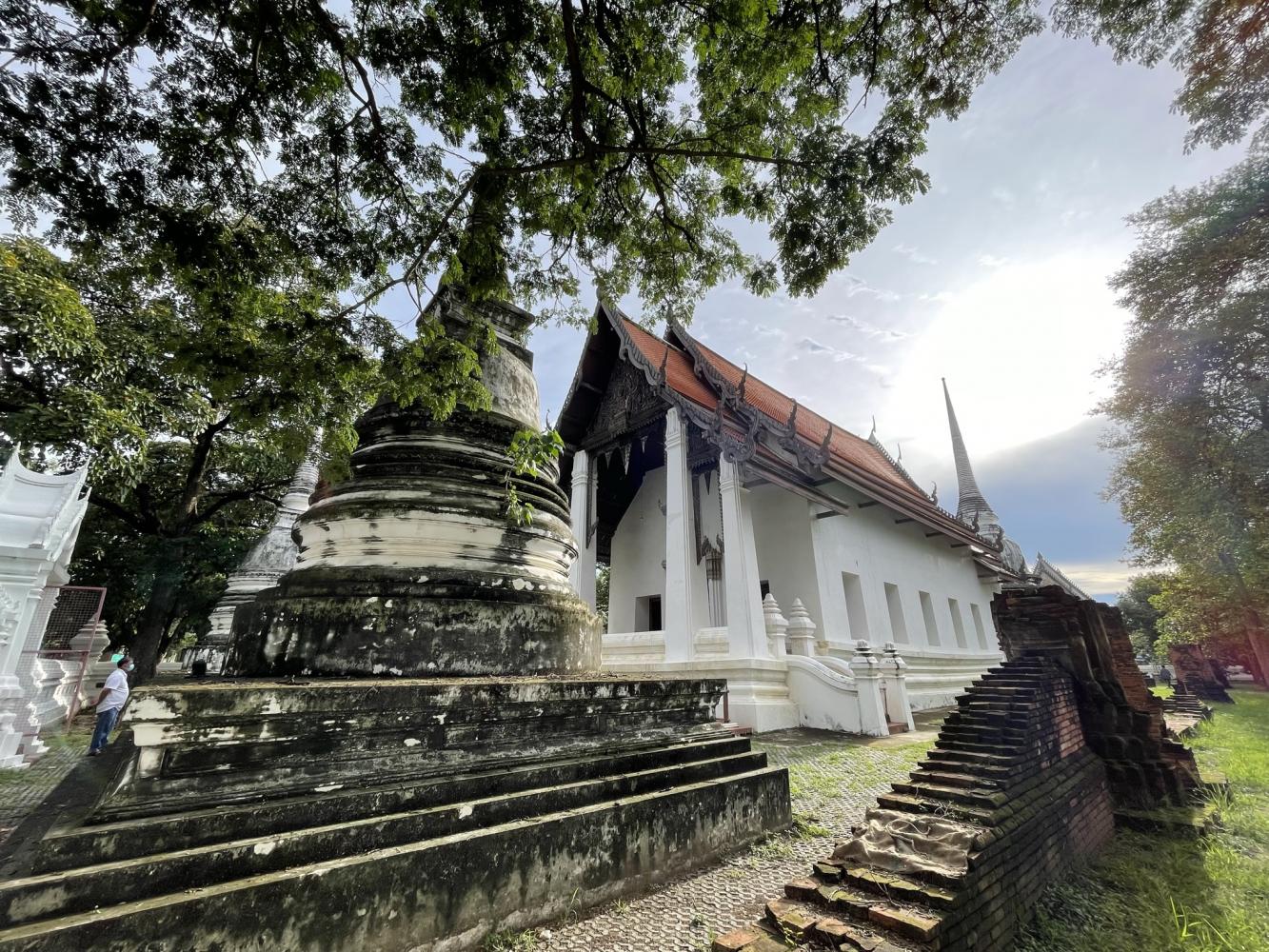 Park to be tabled for World Heritage status