Spotting whales close to the city

Despite the Meteorological Department's warning last week that Thailand, the Andaman Sea and the Gulf of Thailand would be hit by severe rains, my travel companions and I decided to continue a long-awaited Bryde's whale-watching trip to Samut Sakhon. 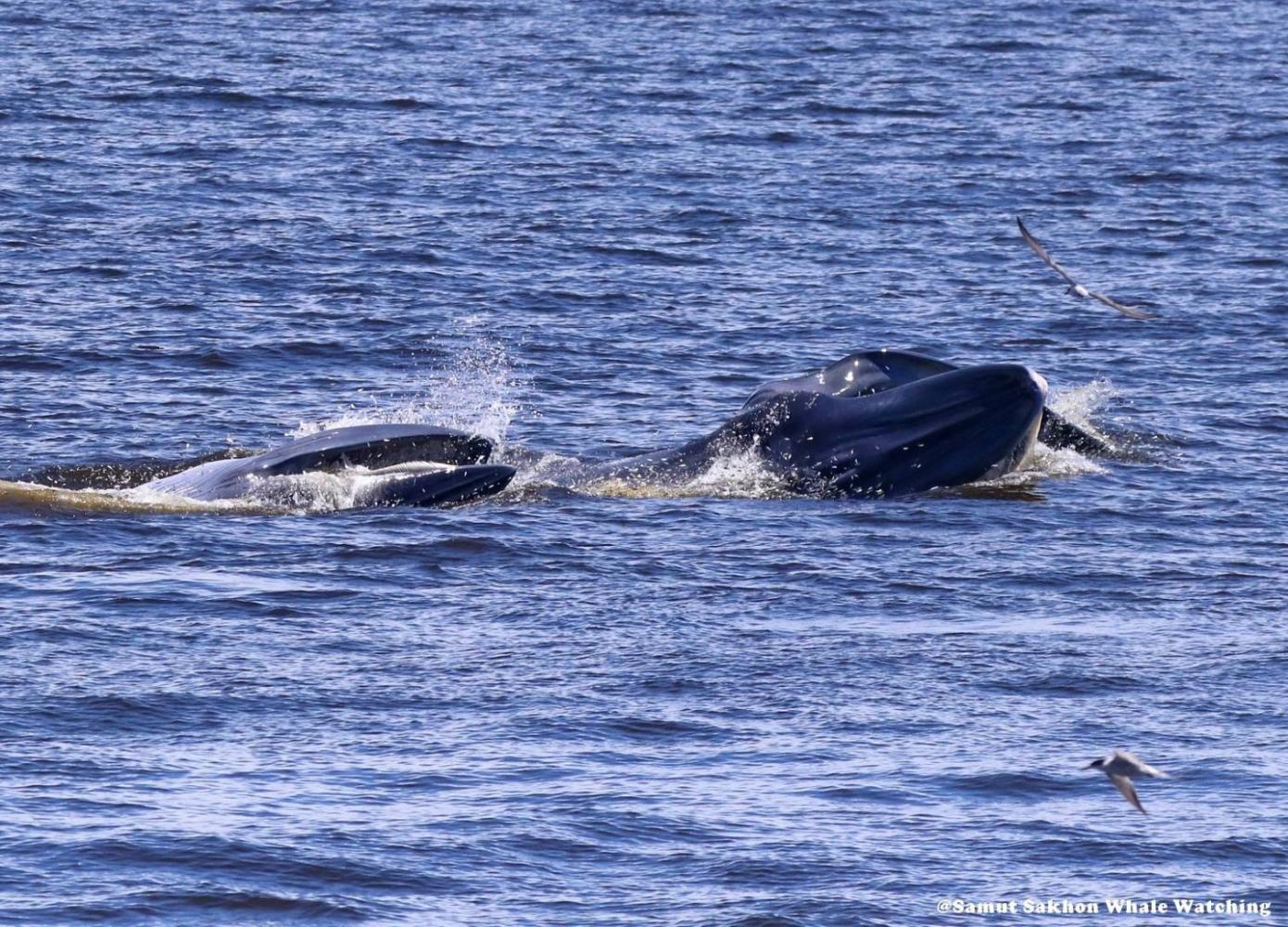 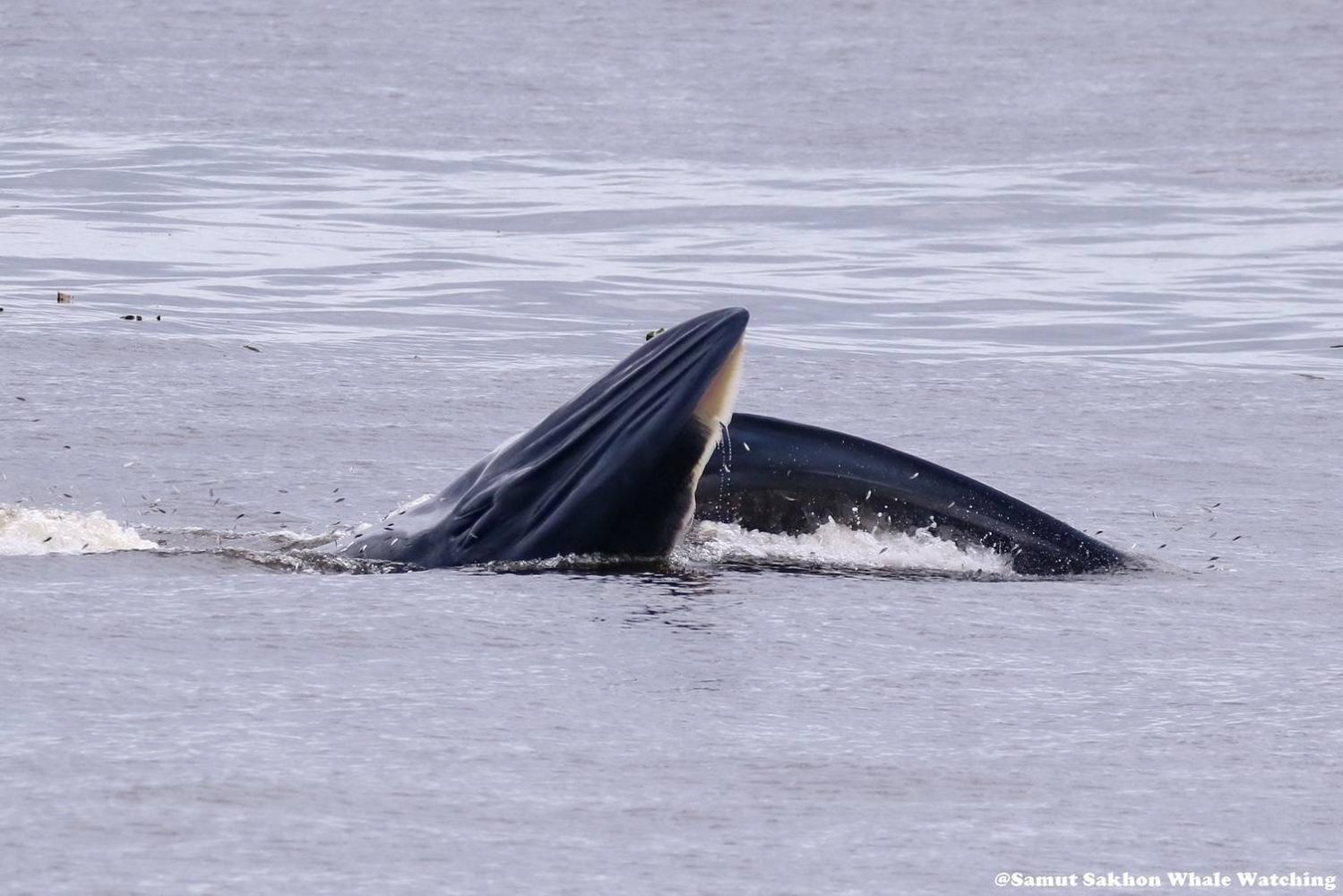 Early in the morning, I found Bangkok's roads had turned into a lagoon and the sky was overcast, indicating we needed to drive against the clock to JK Seaside Kitchen to board a boat before the ebb tide.

This restaurant is located in a peaceful fishing hamlet in tambon Phanthai Norasing and provides a customised programme of pleasure cruises as well as homestay service for vacationers learning about local life, marine biological systems and aquatic animals in the upper Gulf of Thailand.

To provide convenience, a fishing boat has been modified to provide a roomy air-conditioned cabin which can accommodate 35 people and is equipped with a smart television to screen videos. Roongroj Jukmongkol from Bryde's Whale Samut Sakhon Club and renowned nature photographer Smith Sutibut, who has worked with the Department of Marine and Coastal Resources to establish Thai Bryde's Whale Club, served as special guides.

This bay is only 3km from Bangkok and connects to the network of the Chao Phraya, Bang Pakong, Tha Chin, Mae Klong and Phetchaburi rivers, making it rich in minerals and plankton. Groups of small fish such as anchovies and short mackerel swarm this area near the end of the rainy season, providing an excellent food supply for Bryde's whales.

"There are about 60 Bryde's whales here, and visitors can see them all year. They, however, are newborns. In 2008, the MCRC, the Upper Gulf of Thailand, began creating picture identification to establish the number of Bryde's whales. Each has a unique set of flaws, appearance and flippers. We give them names like Chao Sakhon, who seems like a great-grandfather giving birth to multiple generations of whales, and Mae Sodsai, who has an indented flipper," Smith said. 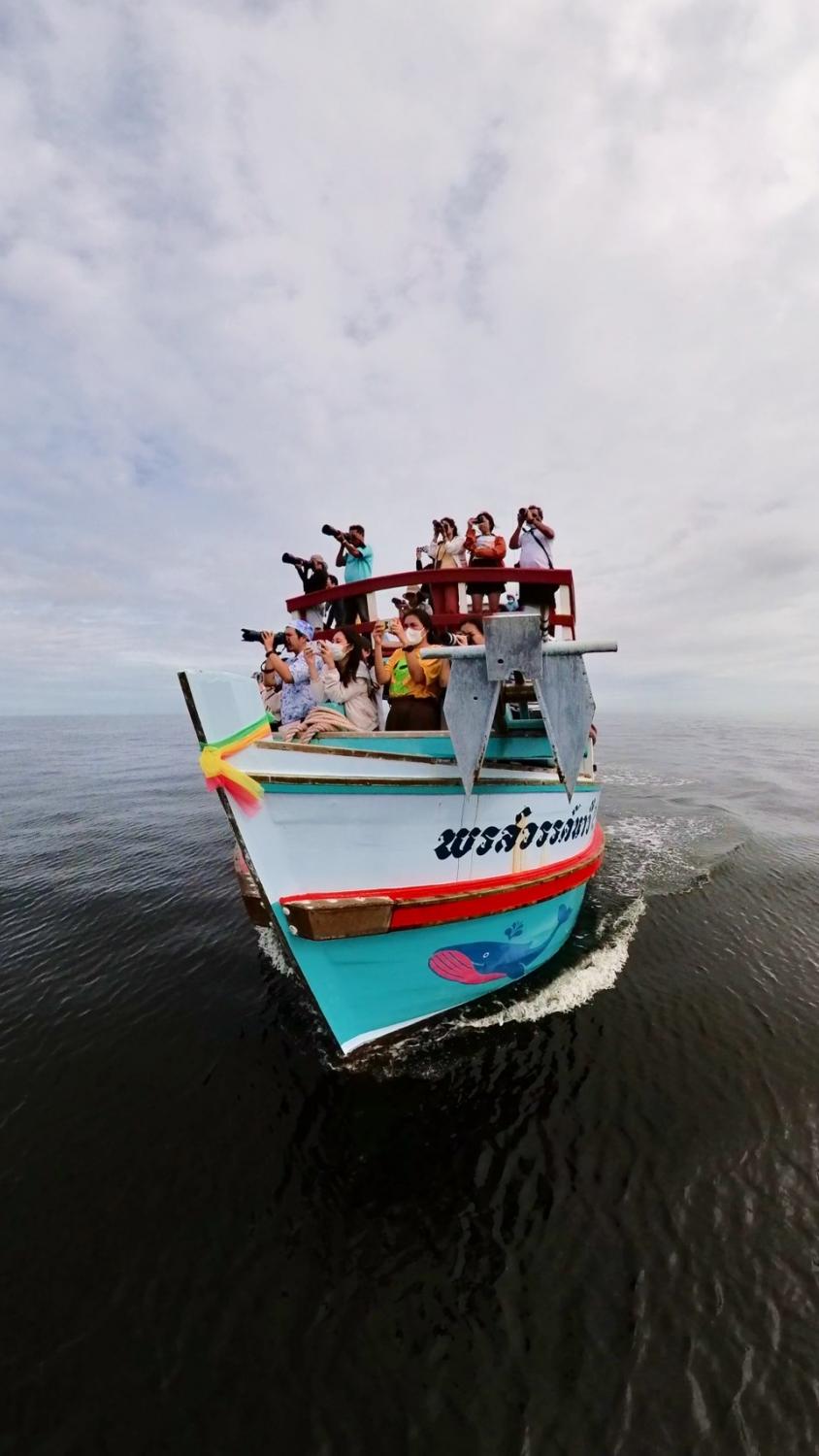 "A Bryde's whale has a 12-month gestation period and spends up to three years feeding their pups. They like to eat little fish and we can see their behaviour as they gulp for prey. They lack teeth, but have a filter-feeding system within their mouth."

We followed a fleet of local fishermen to the mouth of the Klong Pramong canal, where we saw them catch mussels, shrimp and fish as a large group of Irrawaddy dolphins greeted us not far from the banks by showing their acrobatic jumping and swimming talent.

It took us about an hour to reach the riverbed of the Tha Chin, where we spotted a large group of 20 Bryde's whales. We slowly followed them as they dove into the sea before rising to the surface.

This caused us to compete in a photo contest to see who could get the best shot of whales gliding about to herd a school of fish. We felt like we were in a water theme park during lunch, with a fantastic whale show viewable from every corner of the boat.

On our way back to land in the late afternoon, we witnessed a variety of seabirds, including skua, frigatebirds, brown-headed gulls and black-headed gulls. Roongroj and Smith claimed we were lucky since this was the largest group of Bryde's whales they had seen in recent years.

The next morning, we woke to stunning vistas of Klong Phi Lok, where the Amphawa waterside village in Samut Songkhram has preserved the traditional way of life. It was a pleasant moment to enjoy local-style breakfast while watching monks paddle a boat for an almsgiving ritual. 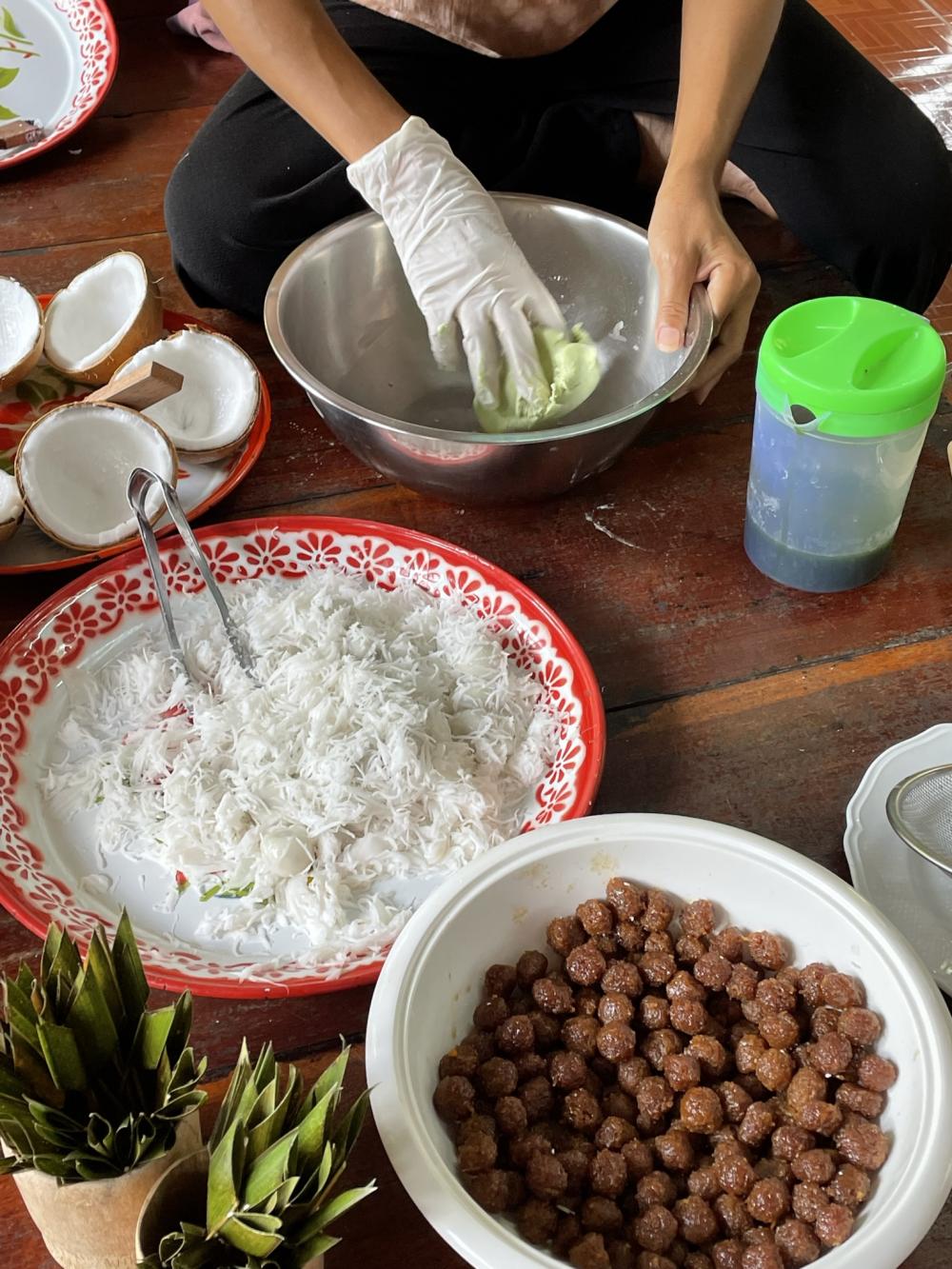 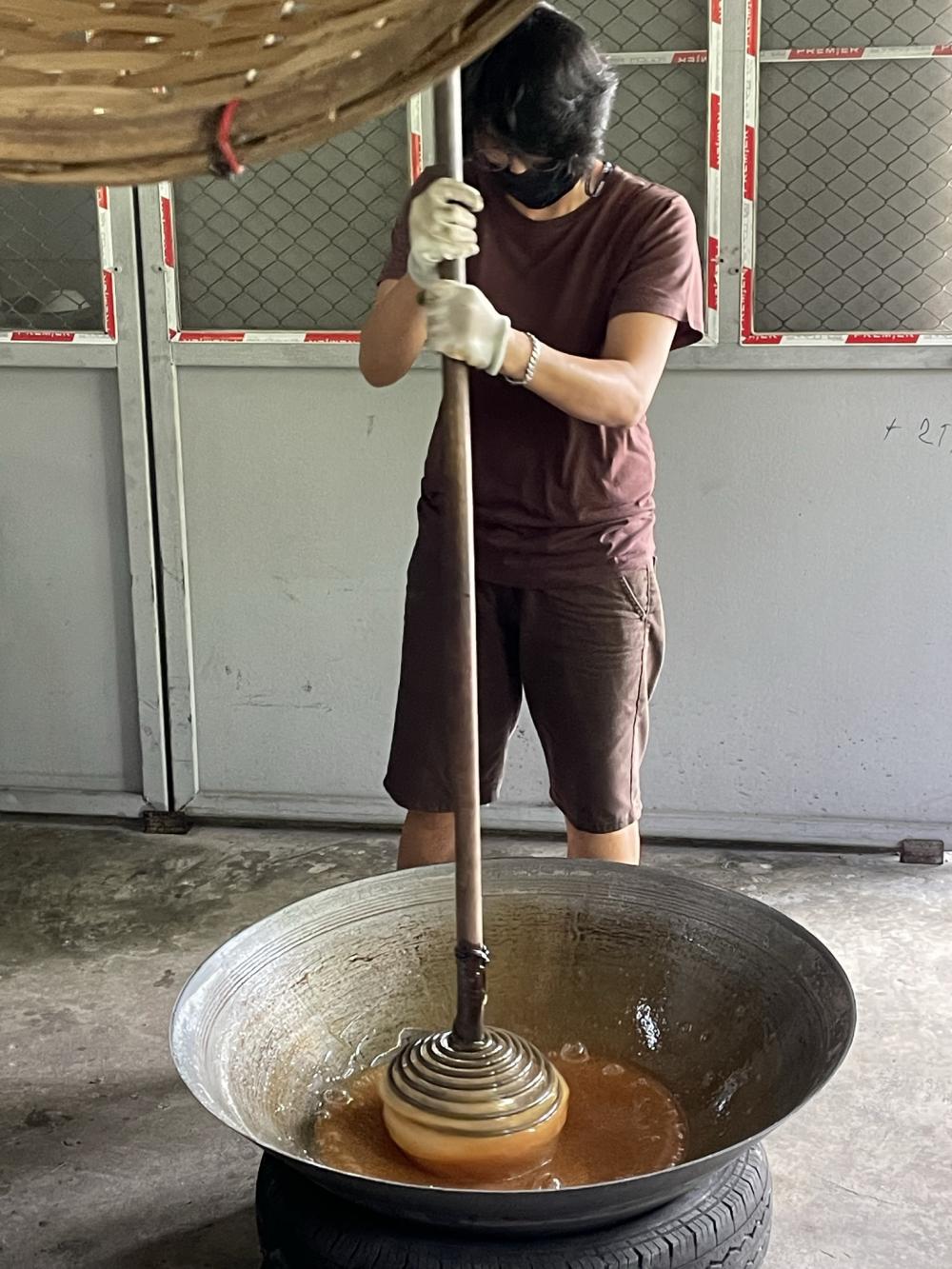 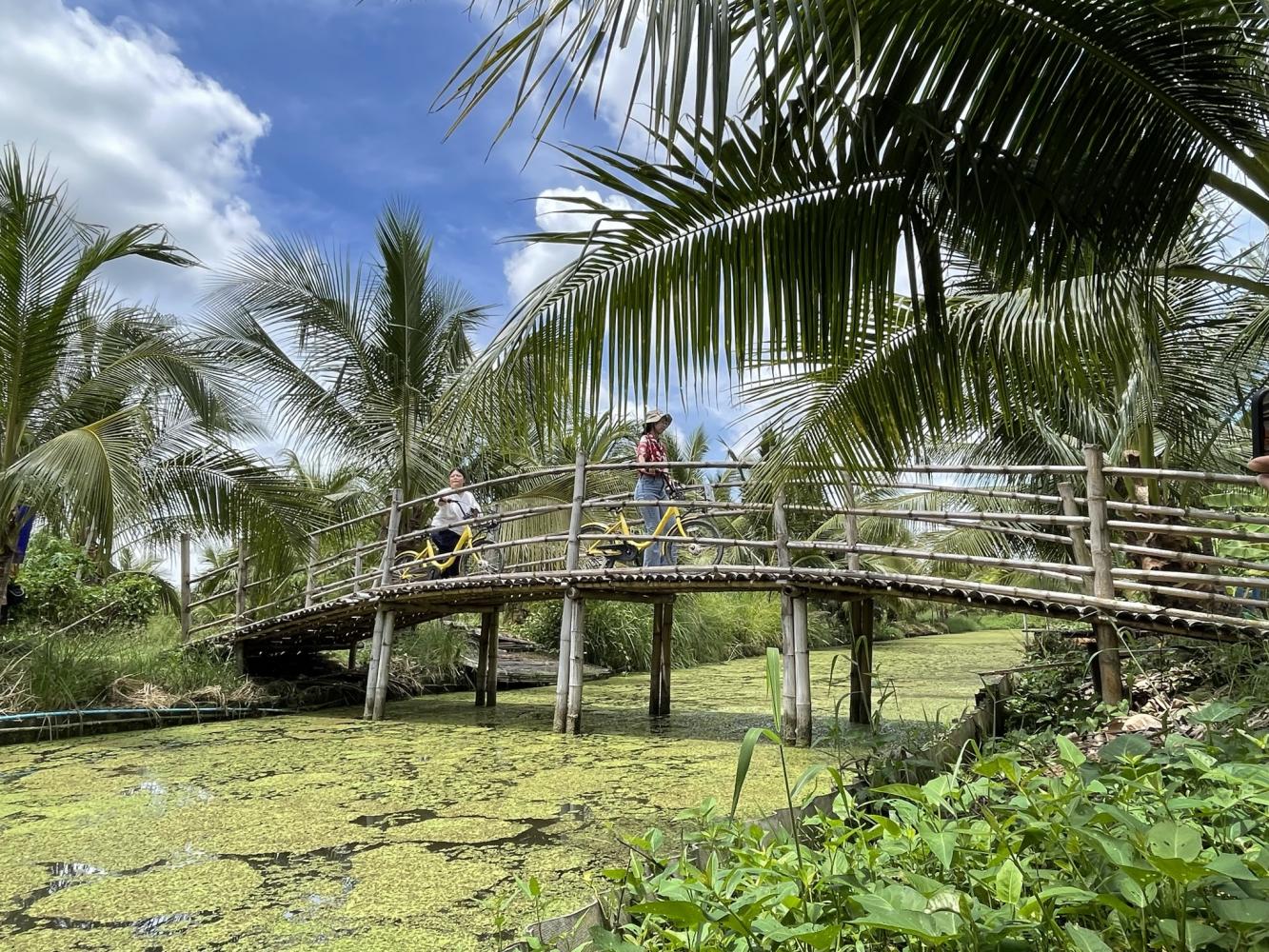 It was a short walk from our resort to Baan Rim Klong Homestay, one of the first five models in the Tourism Authority of Thailand's Carbon Neutral Tourism project. Opened in 2008, it's a brainchild of Thirada "Pa Lek" Ekkaewnamchai to transform her waterside house into a lodge offering a customised homestay programme with creative low-carbon workshops for overnight stays and day trips.

"We realised that tourists' behaviour has changed. They prefer to stay in a resort rather than a homestay. So, we've learned to adapt and create a variety of low-carbon activities for tourists who care about the environment," Pa Lek said.

"We've worked with the Bank for Agriculture and Agricultural Cooperatives to set up a tree bank to encourage students and visitors to plant trees such as lamphu, mangrove and coconut as well as some economic plants including mango, rose apple and mulberry."

Designed to be a learning centre, villagers demonstrated how to create coconut sugar, syrup and brown sugar utilising traditional techniques. Then we used coconut sugar to make some classic desserts like khanom tom (boiled rice flour dumpling filled with coconut sugar and coated with shredded coconut) and luk chup (a combination of mung beans, coconut milk and coconut sugar, which are shaped to resemble fruits and animals).

My friends showed off their creativity by fashioning their hats, baskets, decorative mobiles and portable fans out of young coconut leaves. At the same time, two designers from the Chialai Choo brand led a workshop to create an edition of tie-dyed cotton handkerchiefs inspired by the heart, star, firework, tartan and geometry. They extracted brown colours from coconut shells and tabun bark, and yellow from curcuma. 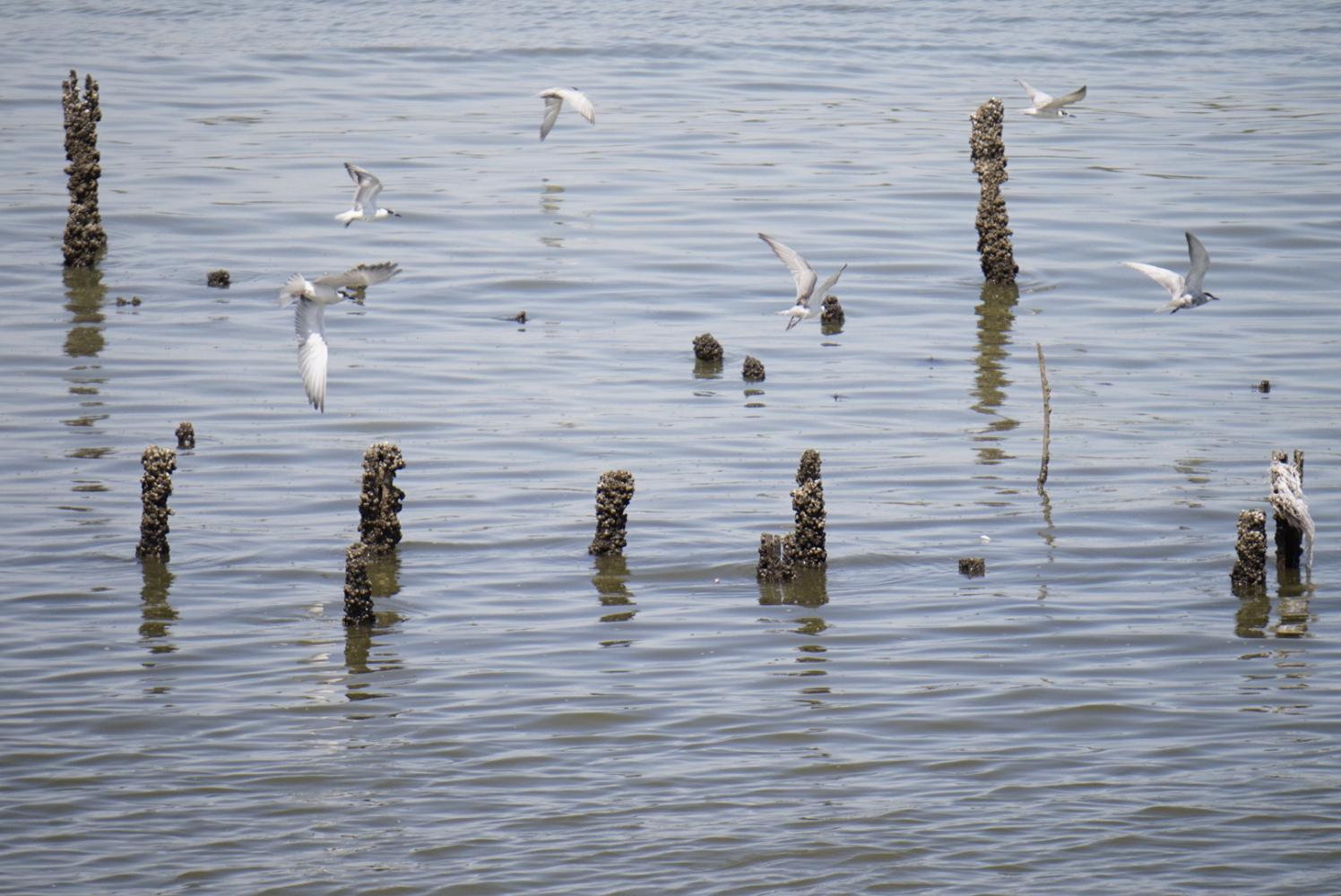 Seabirds along the shore.

After lunch, we burned off some calories by riding a bicycle around a backyard, which is dotted with perennial trees, economic plants and vegetables to learn about the sufficiency economy and new theory of agriculture. Pa Lek also has a foot spa that employs salt flowers and Thai herbal plants to stimulate internal organs, eliminate fungus and relax muscles.

In terms of garbage sorting, a mountain of dry leaves and food waste is turned into formulated fertiliser, while aluminium cans, glass or plastic bottles are sold to the recycling plants. Plastic cups, straws, plastic bags and foam containers are used to create energy.

"We grew up in the big city and realised that a balance of modern technology and the environment is important for the world to progress," Rangsiman said.

"With a focus on sustainability, we've learned about agroforestry from local sages and raised 40 chickens to collect fresh eggs, while syrup, fresh vegetables and coffee beans come from local farms and the North. We also raise stingless bees to produce our own organic honey." 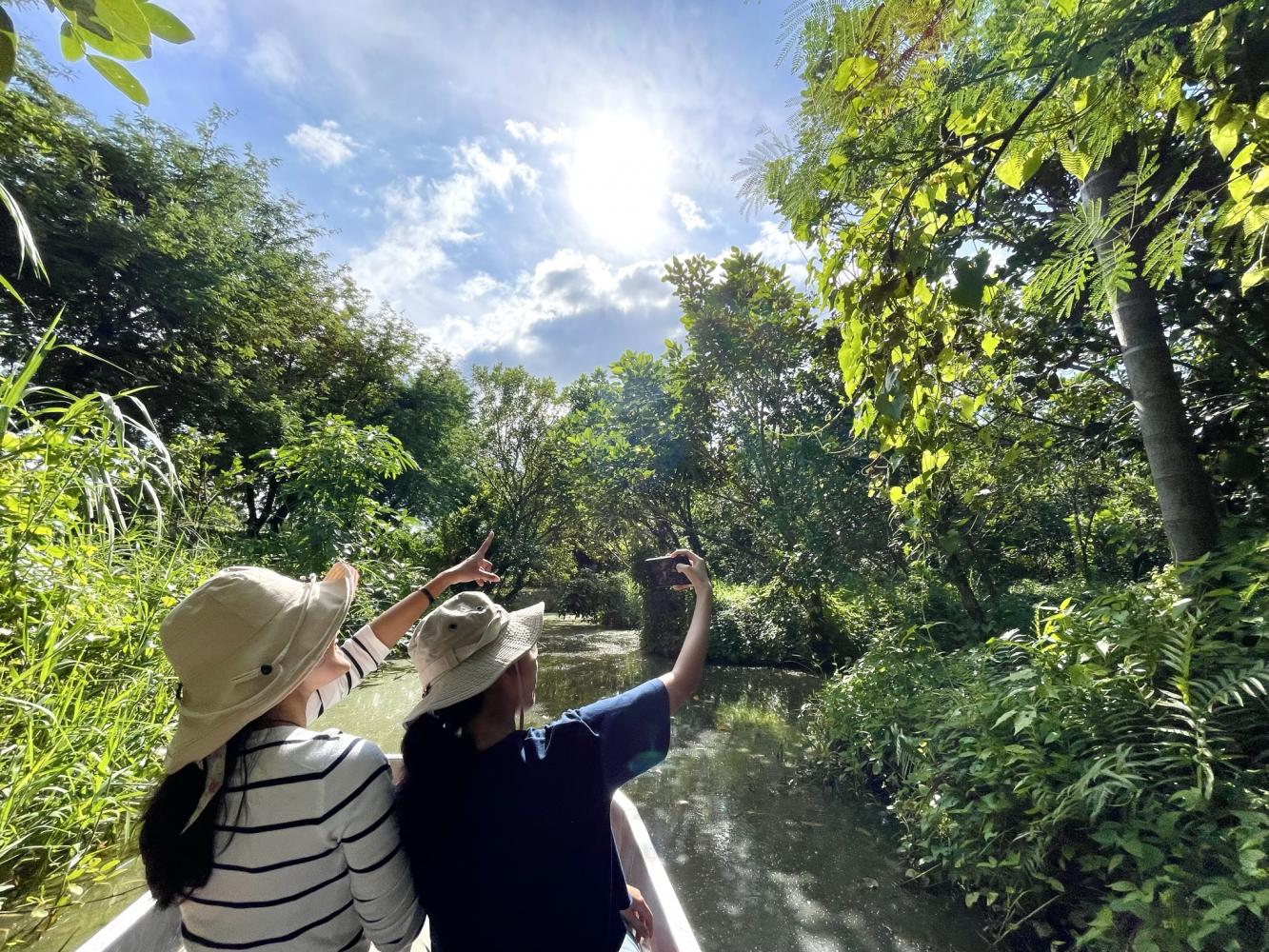 Somdul Agroforestry Home is designed to be a cafe and learning centre to educate people about waste management. 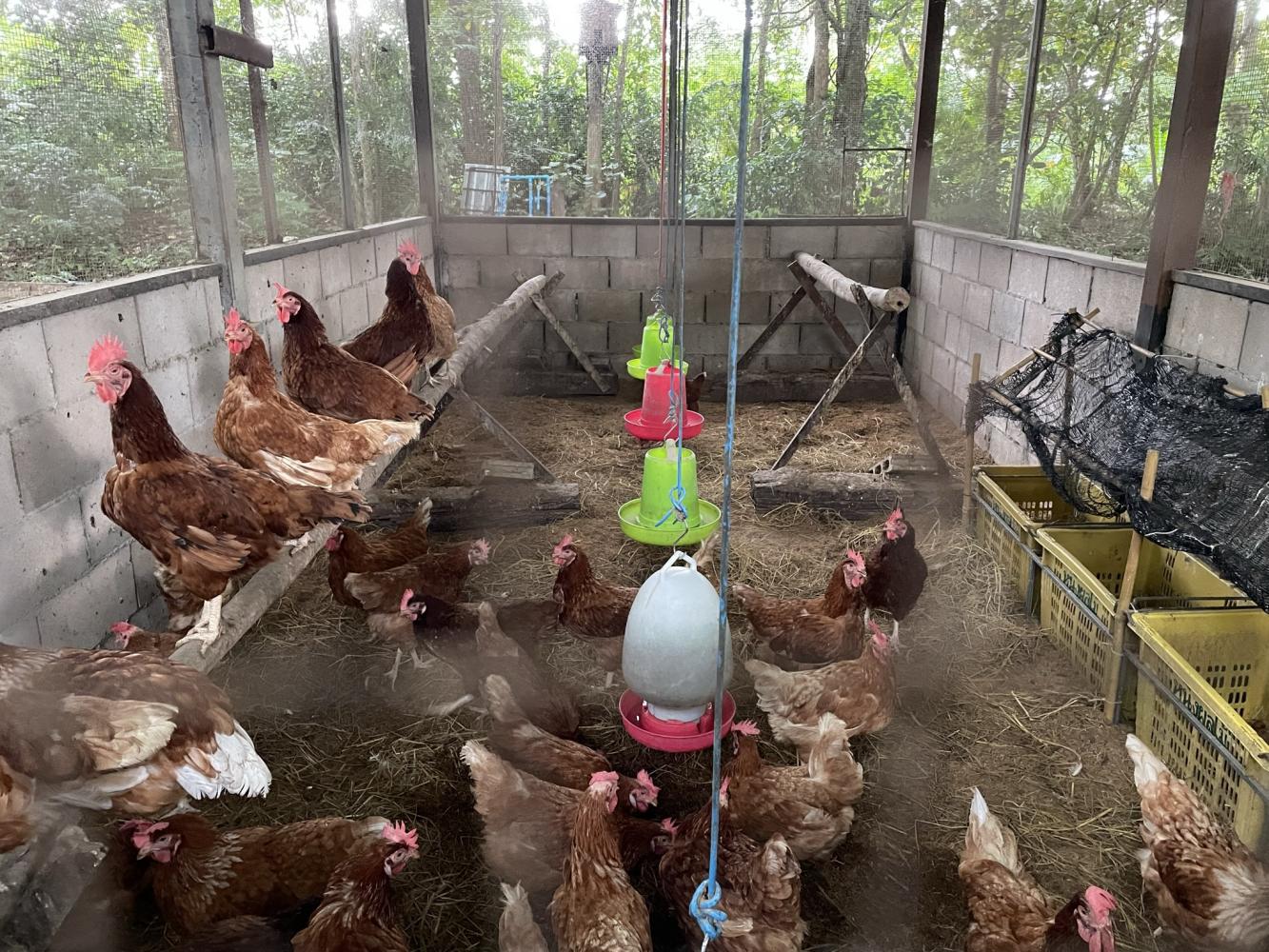 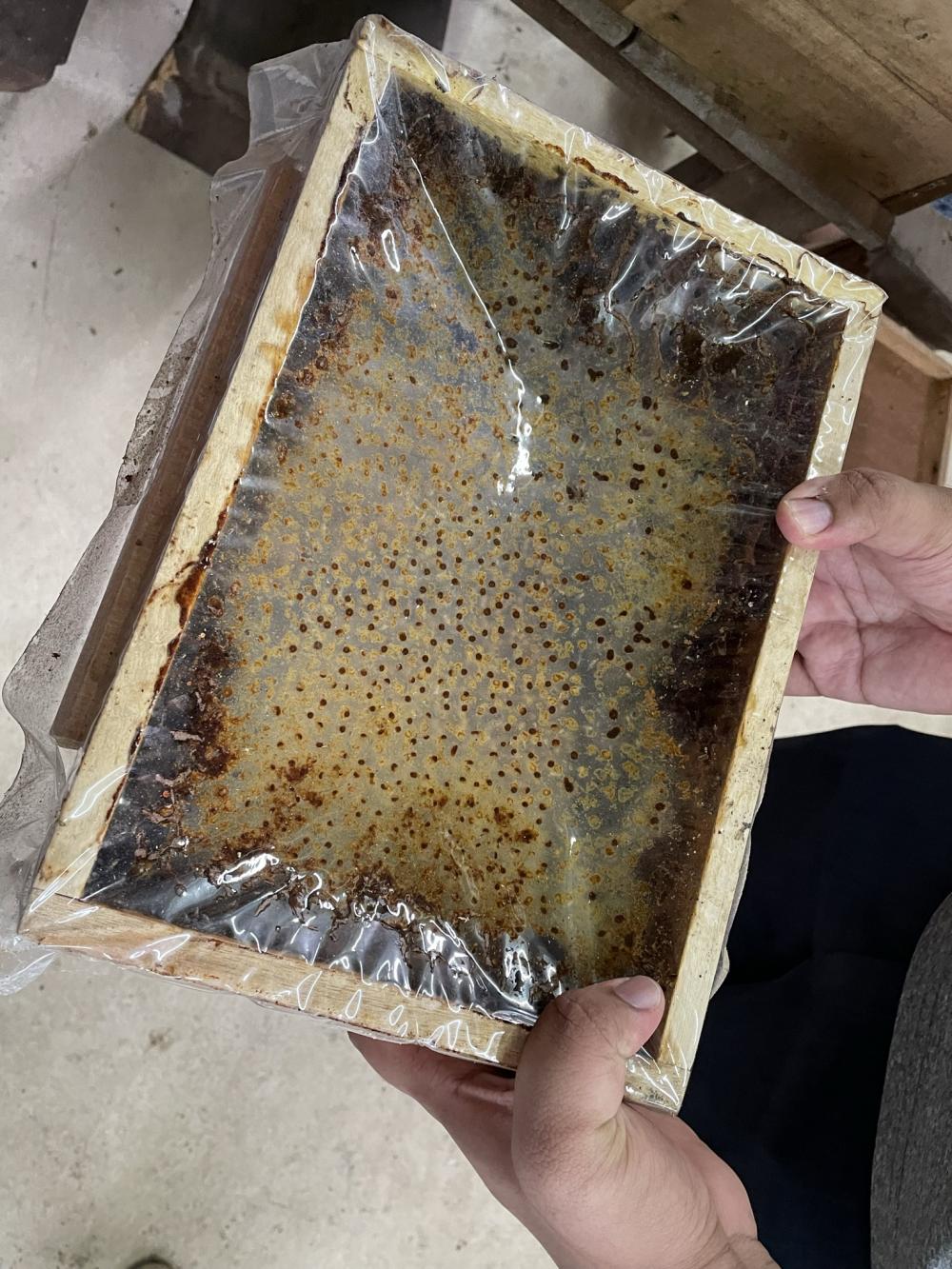 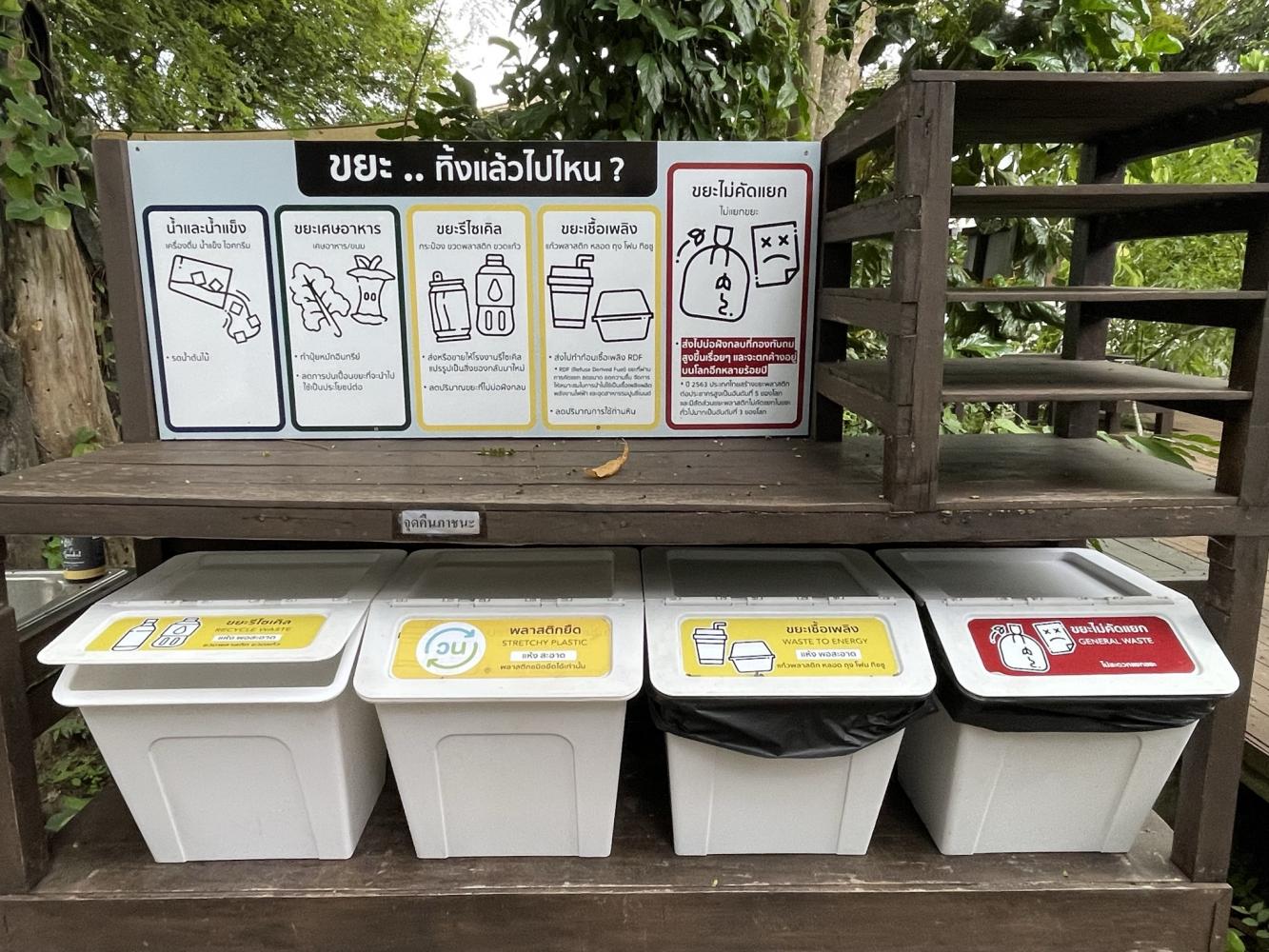 On the last morning, we took a 10-minute drive from the resort to the 100-year-old Tha Kha floating market, where villagers offered fresh vegetables, fruits and plants from local orchards. For those looking for some breakfast, noodles, khanom bueang yuan (Vietnamese savoury crepe), khanom krok, grilled pork with sticky rice and hoy tod still remain the best-selling culinary options.

We boarded a classic paddle boat for a leisurely 30-minute journey down the Tha Kha canal, observing local life in a peaceful waterside neighbourhood. A line of old Thai-style wood houses has formed along the banks, and residents have set up bamboo traps in front of their piers to capture shrimp and fish.

We passed through lush coconut plantations, lamphu trees and other natural vegetation, as well as Kamnun Chan's House, which King Rama V visited after the abolition of slavery in 1904. The house has been turned into a community museum, with artefacts and ancient household objects from his family's chamber on display.

On our journey back to Bangkok, we stopped at the Thai Thawee Pomelo Garden in Nakhon Pathom, which is known for its smart farming innovation. Tanakit Thaithawee now owns this 30 rai plantation after his father pioneered an organic pomelo garden business in Nakhon Chai Si district 15 years ago.

The garden has 1,500 pomelo trees in five species of khao namphueng, thong dee, tubtim Siam, khao hom and khao phueng. For a half-day programme, visitors can take a cruise through the garden or participate in an eco-friendly workshop on how to make miang som o, how to plant and select a pomelo, and how to produce earthworm casting. 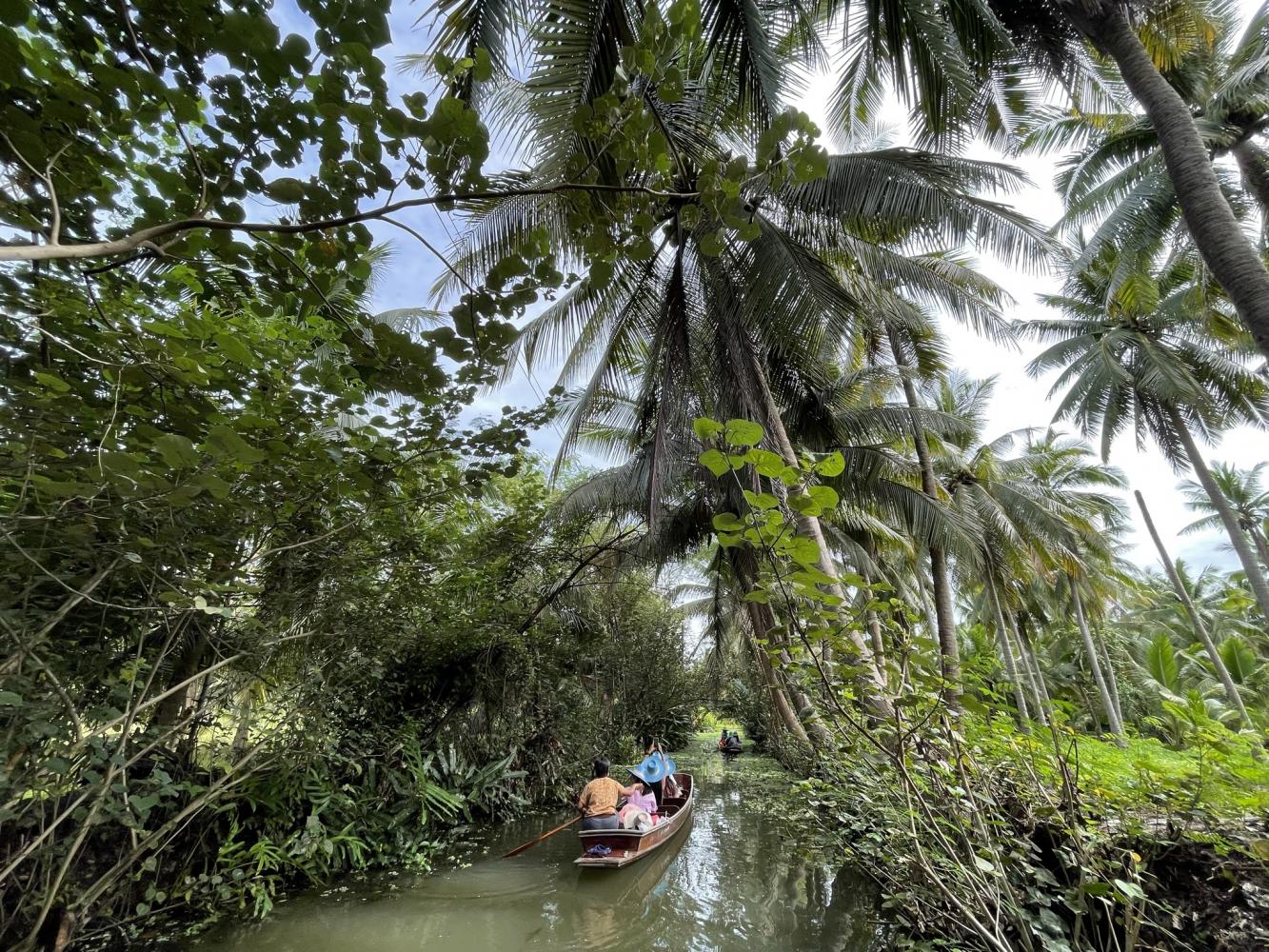 Visitors to Tha Kha Floating Market can take a cruise to explore the waterside community. 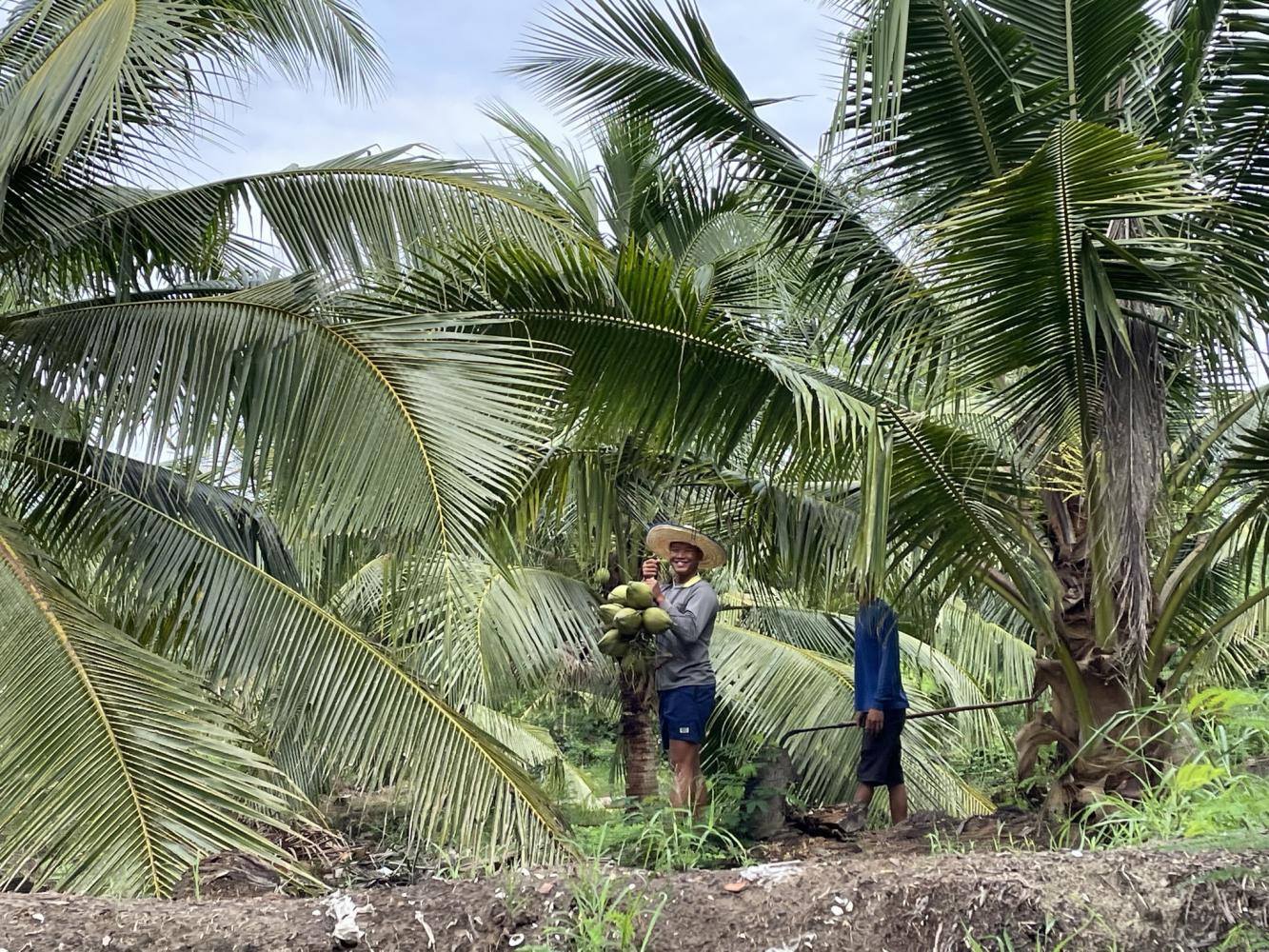 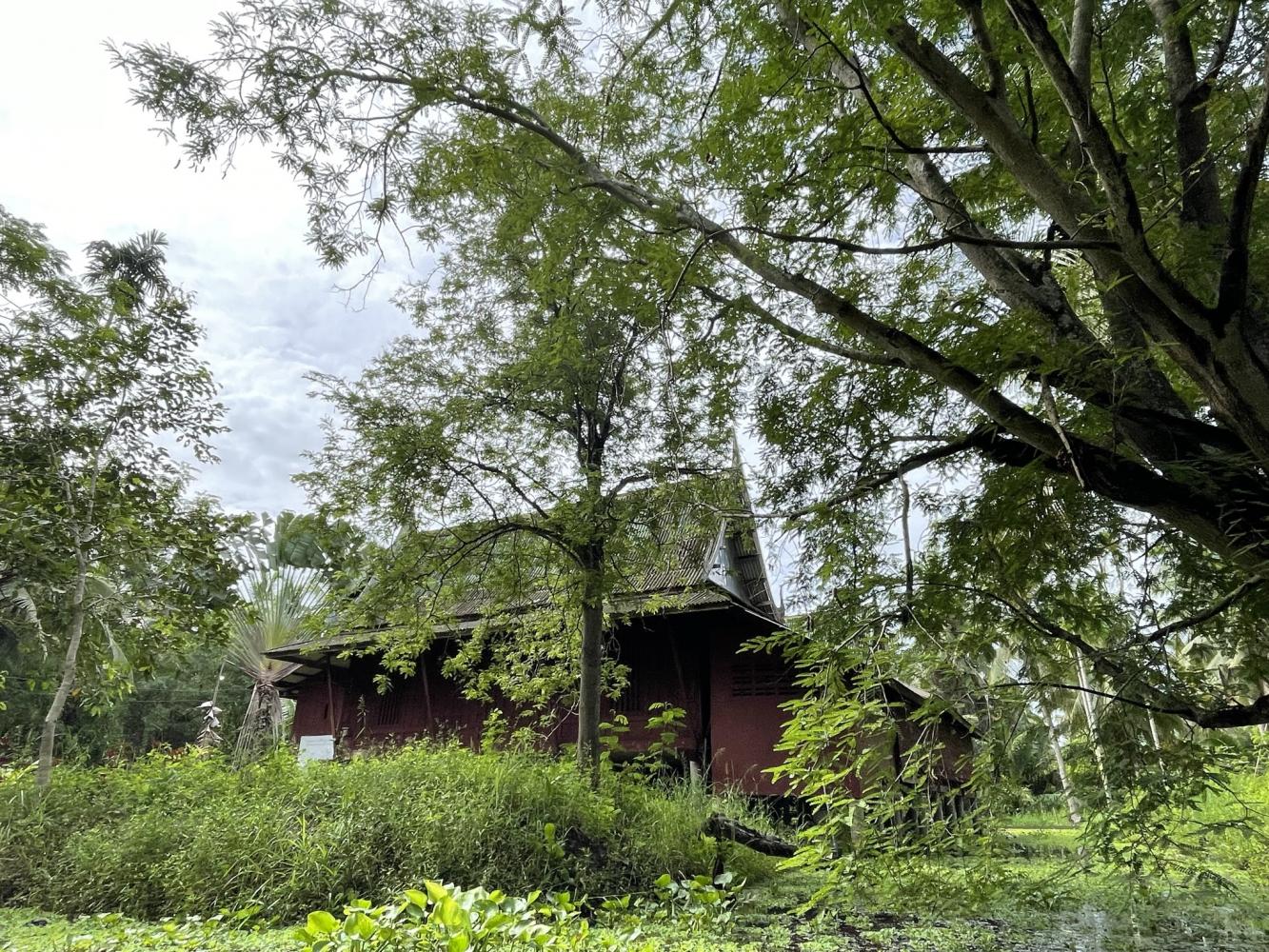 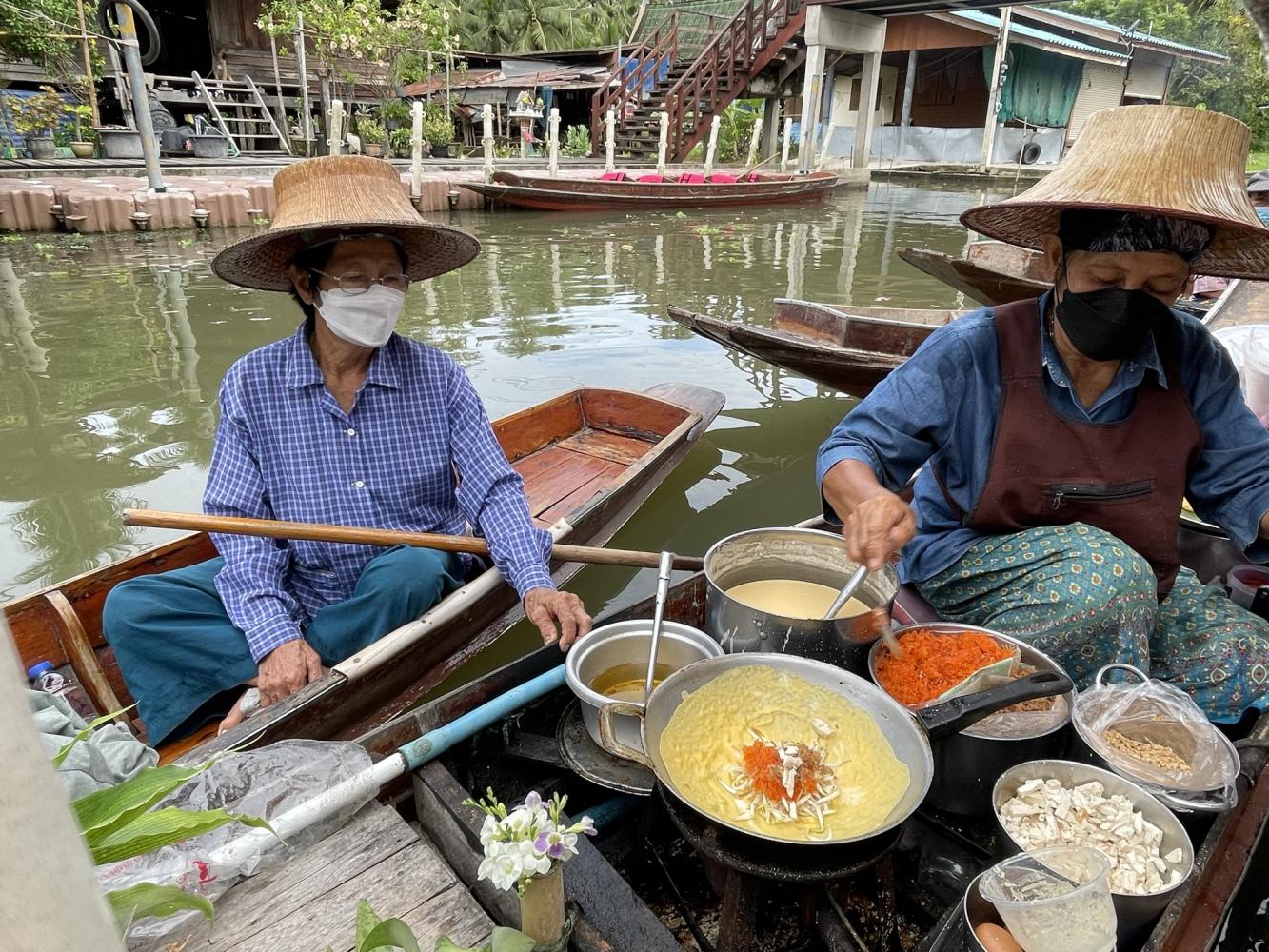 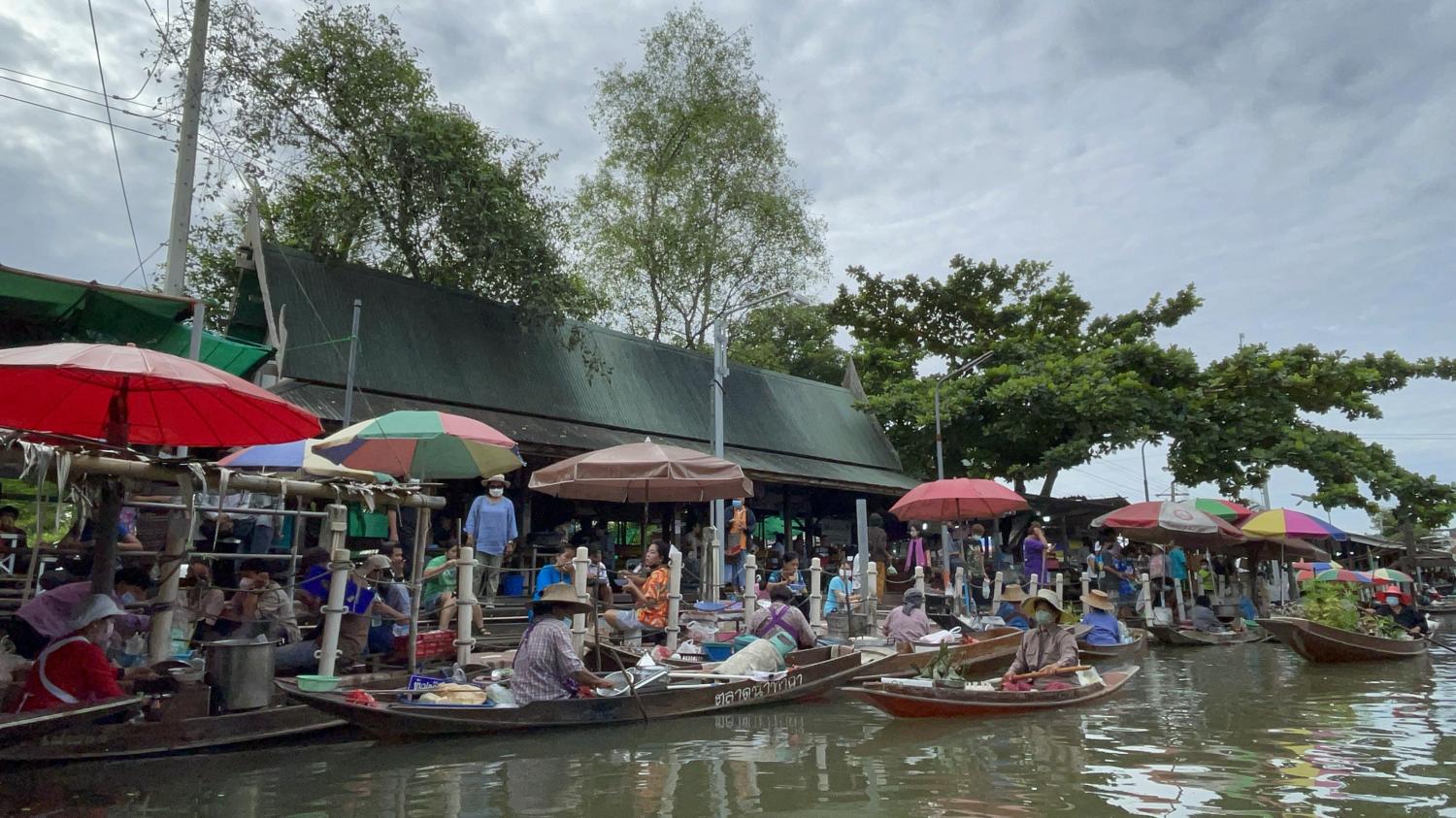 The Bryde's Whale Samut Sakhon Club offers a whale-watching tour on Saturday and Sunday. The prices start from 1,500 baht for children and 2,000 baht for adults, including meals. Call 089-441-0468 for further information.

Somdul Agroforestry Home is situated in Bang Khonthi district, Samut Songkhram. It's open Friday to Wednesday from 9am to 5.30pm. Call 098-362-9894 or visit somdul.com for further information. 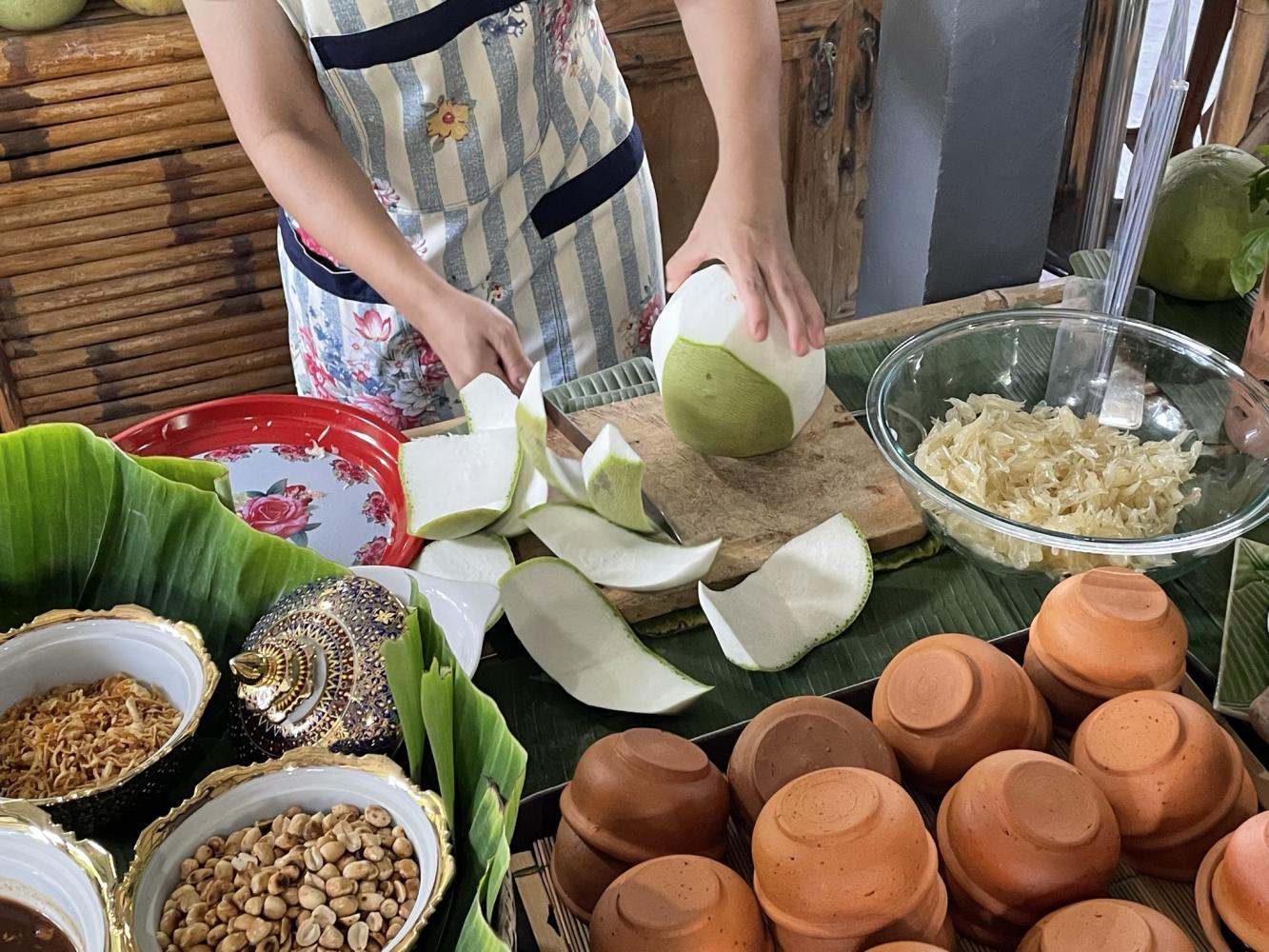 Thai Thawee Pomelo Garden has been praised for its innovative smart farming practices. 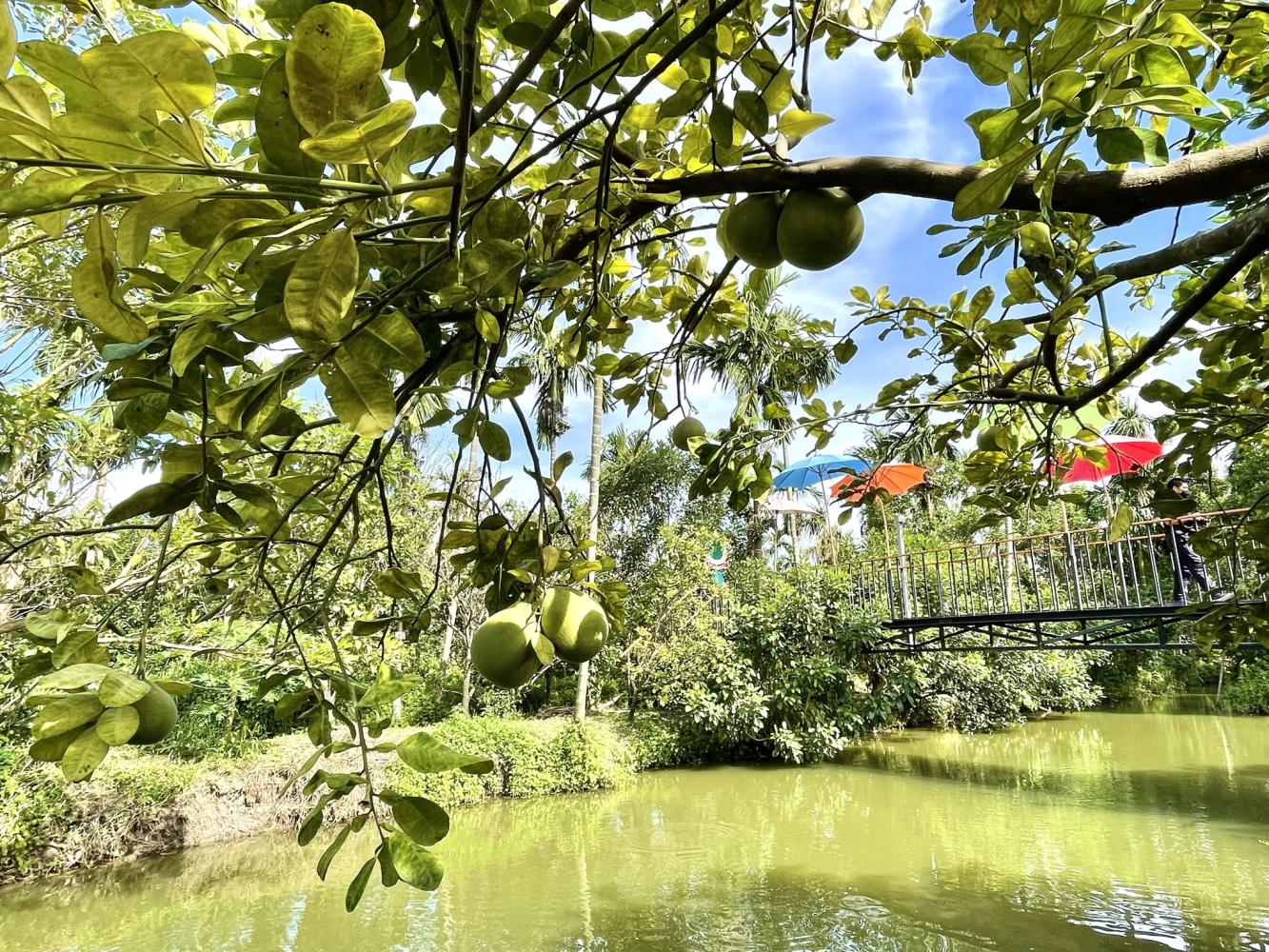