Just north of Bangkok, travellers to Pathum Thani can discover an area rich in culture through the TAT's 'Legacy Of River' initiative

The sky over Pathum Thani was gloomy and the water level was rising when we arrived at the new Riverdale Marina to board a smart electric ferry for a delightful eco-friendly voyage as part of the "Legacy Of River" initiative.

Along the Chao Phraya River, we would explore old riverfront communities, historic temples and other attractions to learn about Thai cultural heritage and observe how this old town changed from the Ayutthaya and Thon Buri to Rattanakosin periods.

To gear up for the forthcoming high season, this is a collaboration of the Tourism Authority of Thailand (TAT) and the Thai Chamber of Commerce to promote marine tourism and offer new options for upscale travellers in arranging day or overnight trips between Bangkok to Nonthaburi, Pathum Thani and Ayutthaya.

Back in the reign of King Song Tham (1620-1628), the Lat Kret Yai network was constructed in Pathum Thani as a detour on the maritime trade route connecting the Gulf of Siam and the former capital Ayutthaya that later stretched into the Chao Phraya. 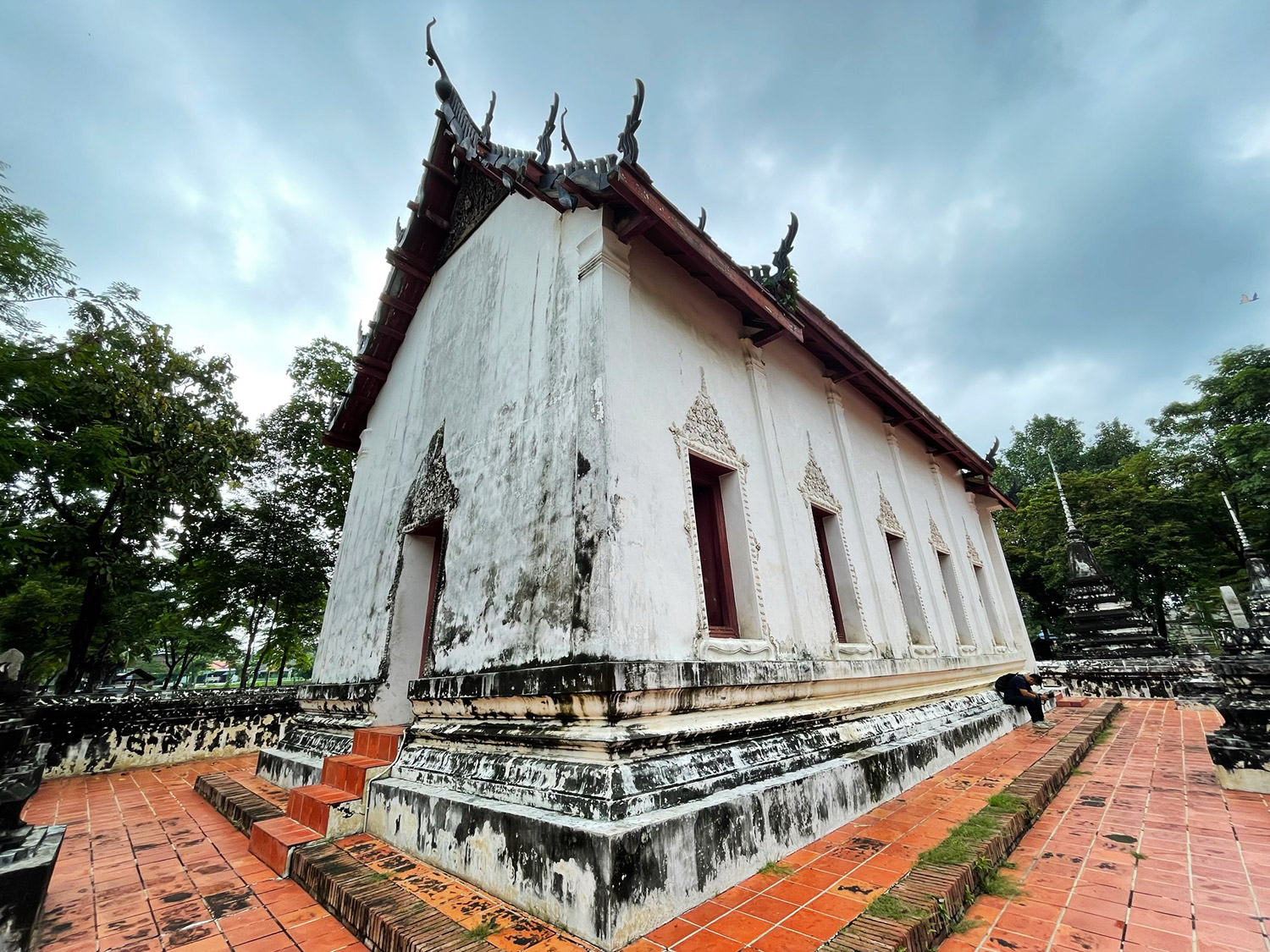 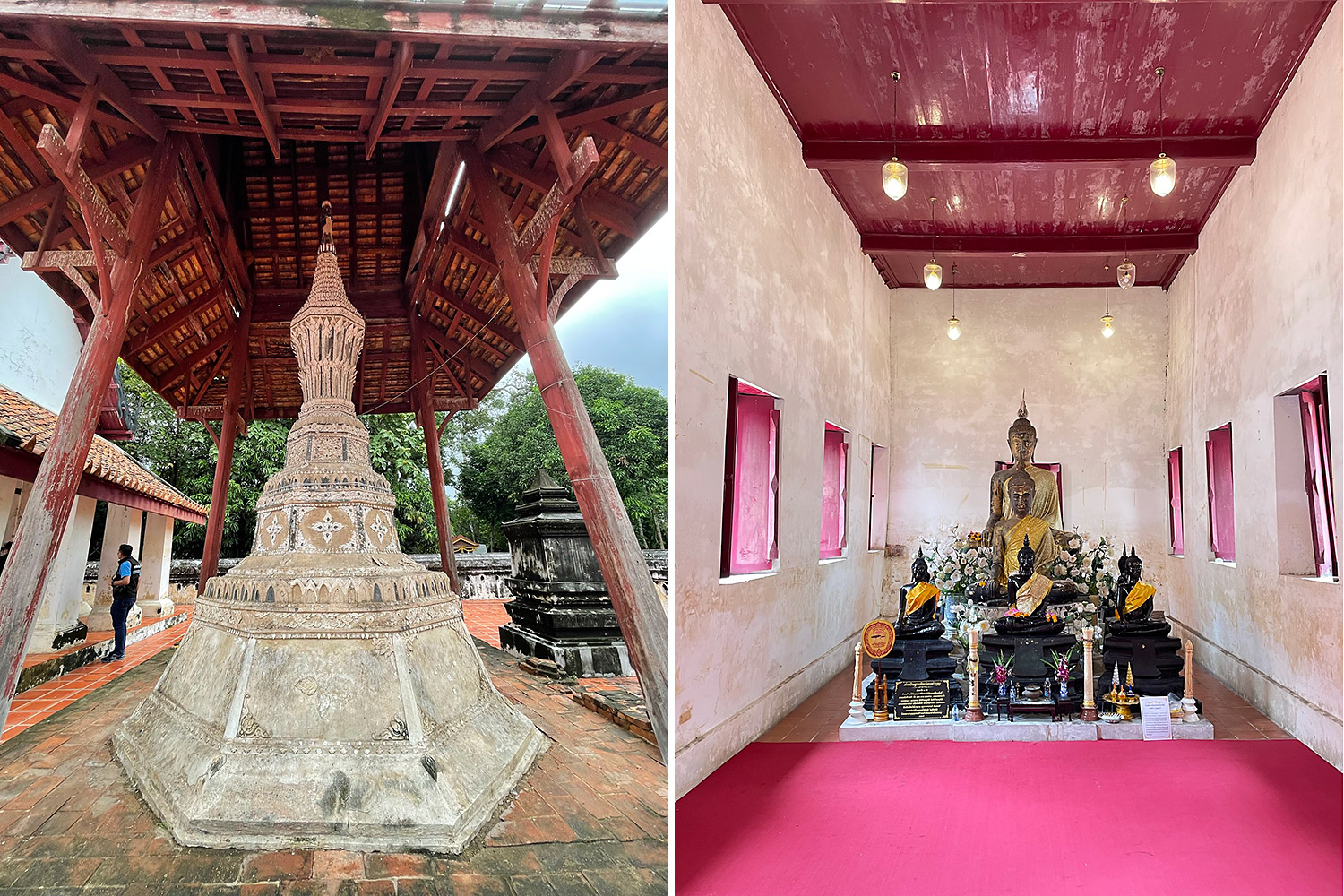 Wat Singh was built during the Ayutthaya period.

When Mon immigrants arrived in the Sam Khok district during the reign of King Narai the Great (1656–1688), they transformed it into a significant kiln site for the production of high-quality pottery and refractory bricks in the central region. As a result, the town became a melting pot of Thai, Mon, Malay and Chinese people.

To conjure up images of those times, we ascended to a deck and were treated to a stunning view of the banks of the Chao Phraya, which are lined with classic wood houses designed in both Thai and Mon styles. According to a memo by French priest De Choisy, assistant to French diplomat Chevaliver de Chaumont, who travelled to Ayutthaya during the reign of King Narai the Great, we imagined the scenes when this riverside community served as a bustling market for wild products and the stopover for those travelling from Bangkok to Pathum Thani and Ayutthaya.

"King Rama II travelled to Pathum Thani and modelled the Dhammayuttika Nikaya after the rigid Mon monks. The Mon people had adopted Indian culture and worshipped spirits such as Pi Tao [the turtle] and Pi Kratai [the rabbit] that have passed down from generation to generation. During the reigns of King Rama IV and King Chulalongkorn, this neighbourhood was filled with traditional floating houses," said historian Thanat Bhumarush, who serves as secretary of the Thonburi Community Historical Information Center. 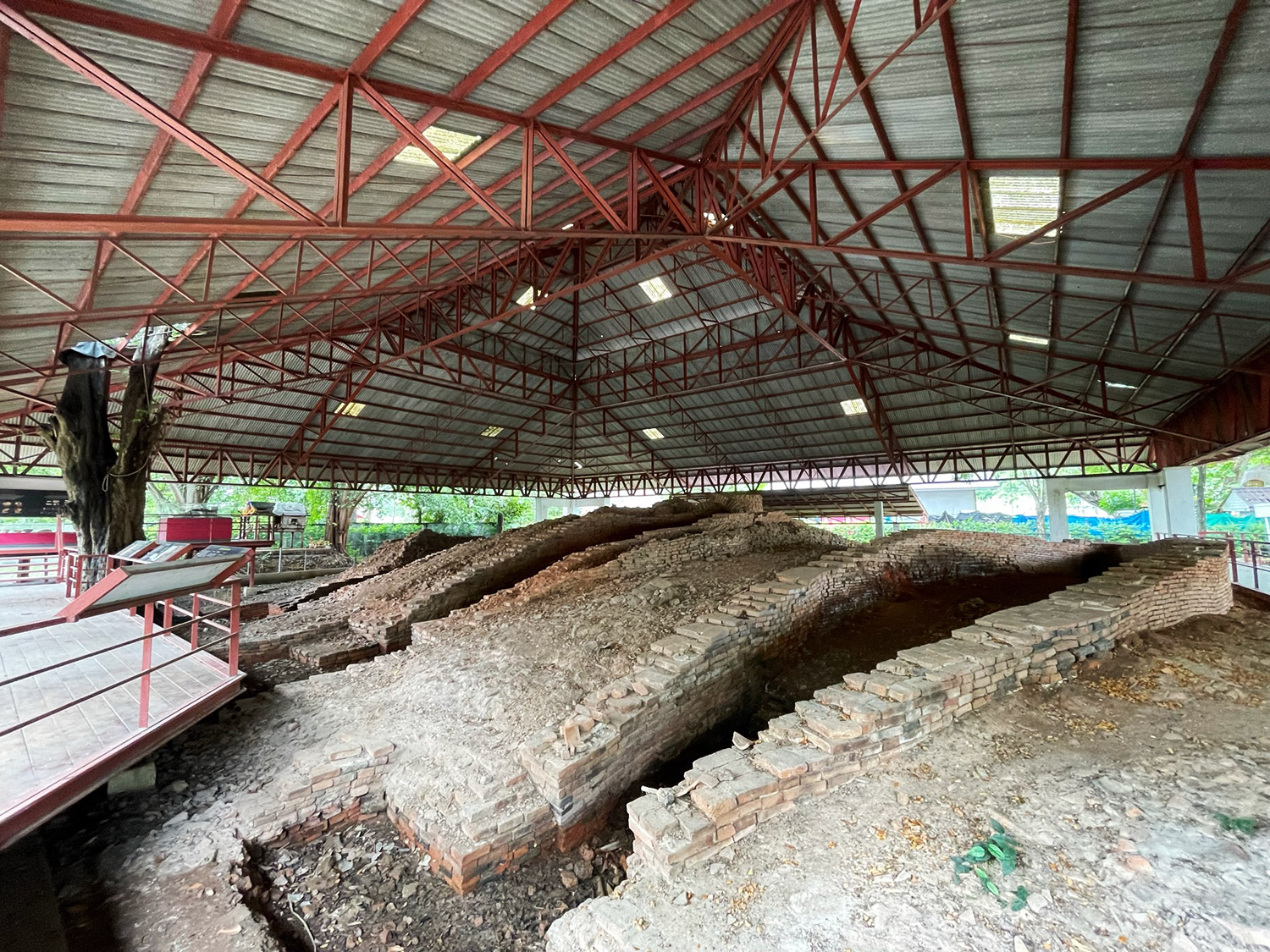 A Sam Khok kiln ruin can be seen in the Ong Ang Ancient Building. 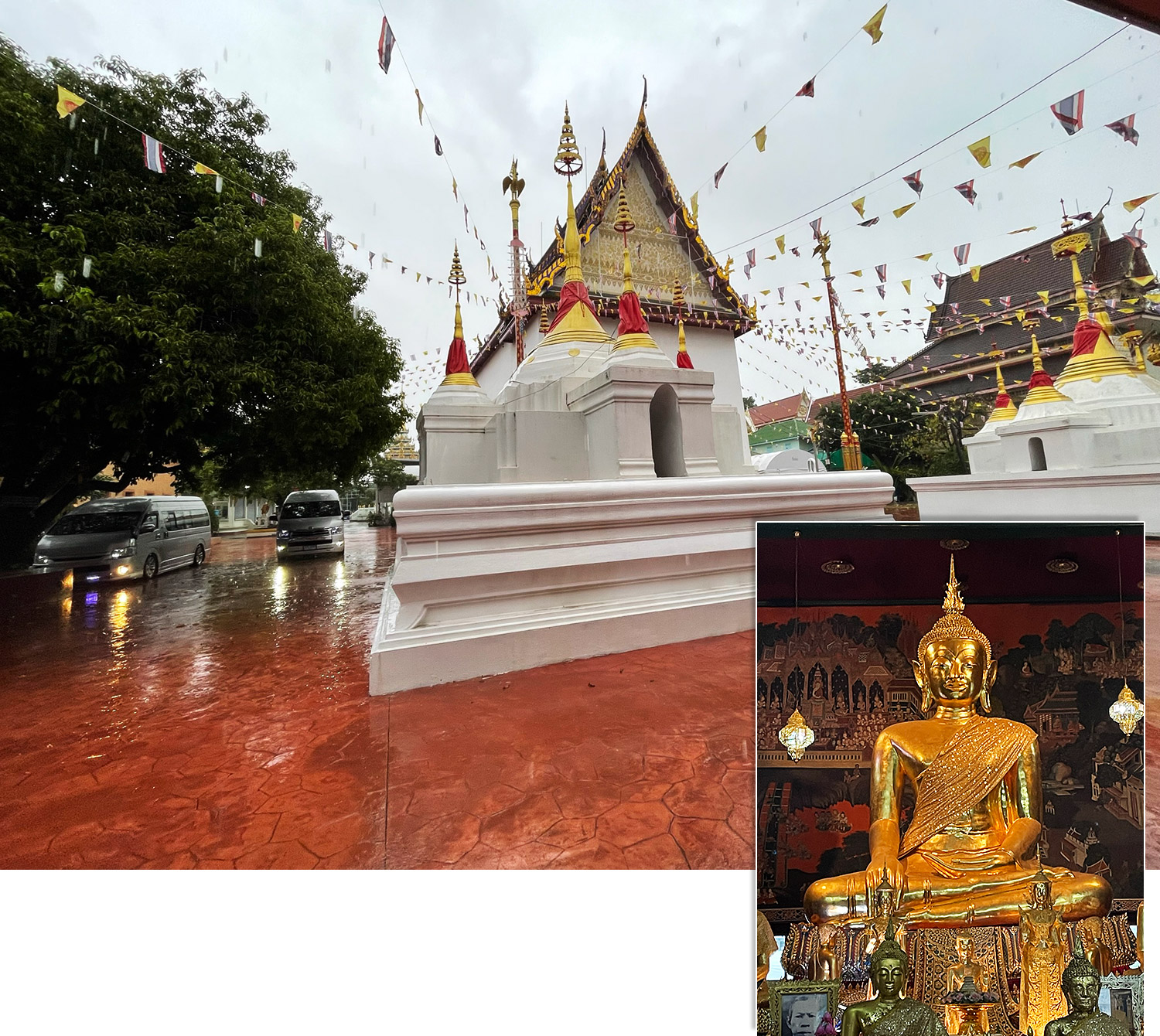 "Passenger boat services were introduced in the reign of King Rama VI and quickly rose to prominence as a main form of transportation in this area. Field Marshal Plaek Phibunsongkhram's administration brought about a change in design patterns, which led to the disappearance of the Ayutthaya-style houses. There are still a number of conventional Mon-style houses, nevertheless. According to Mon belief, they faced south and were constructed to block a stream. They are different from Thai-style homes whose entrance will face a waterway."

After a leisurely 75-minute cruise from the marina, our E-ferry arrived at the Suan Pathum (Pathum Thani Square) pier that is home to a waterside fresh market, Provincial Public Health Office, Pathum Thani Provincial Land Office and public library.

Just a 150m stroll to Thet Bamrung Road, our sightseeing tour began at the former Pathum Thani City Hall, which the Fine Arts Department classified as a national ancient monument in 1996. With its stunning Western-style design, this yellow building was presumed to be constructed in the reign of King Rama VI and now serves as the temporary Pathum Thani Provincial Office of Tourism and Sports.

The ground floor of the building has been transformed into a contemporary community museum with an interactive exhibition that transports visitors to the heyday of Pathum Thani as a bustling port for maritime trade before it changed into an industrial zone. 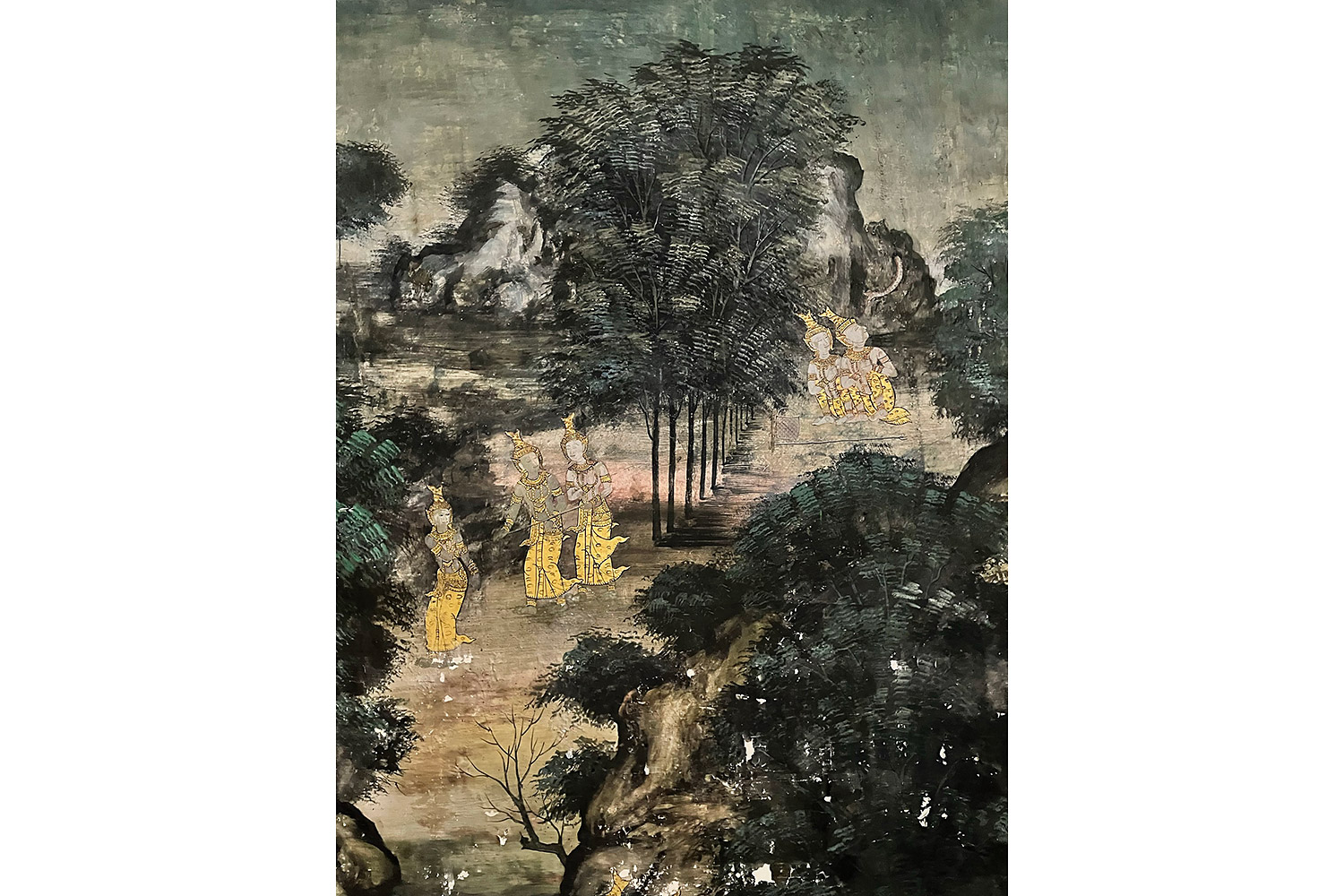 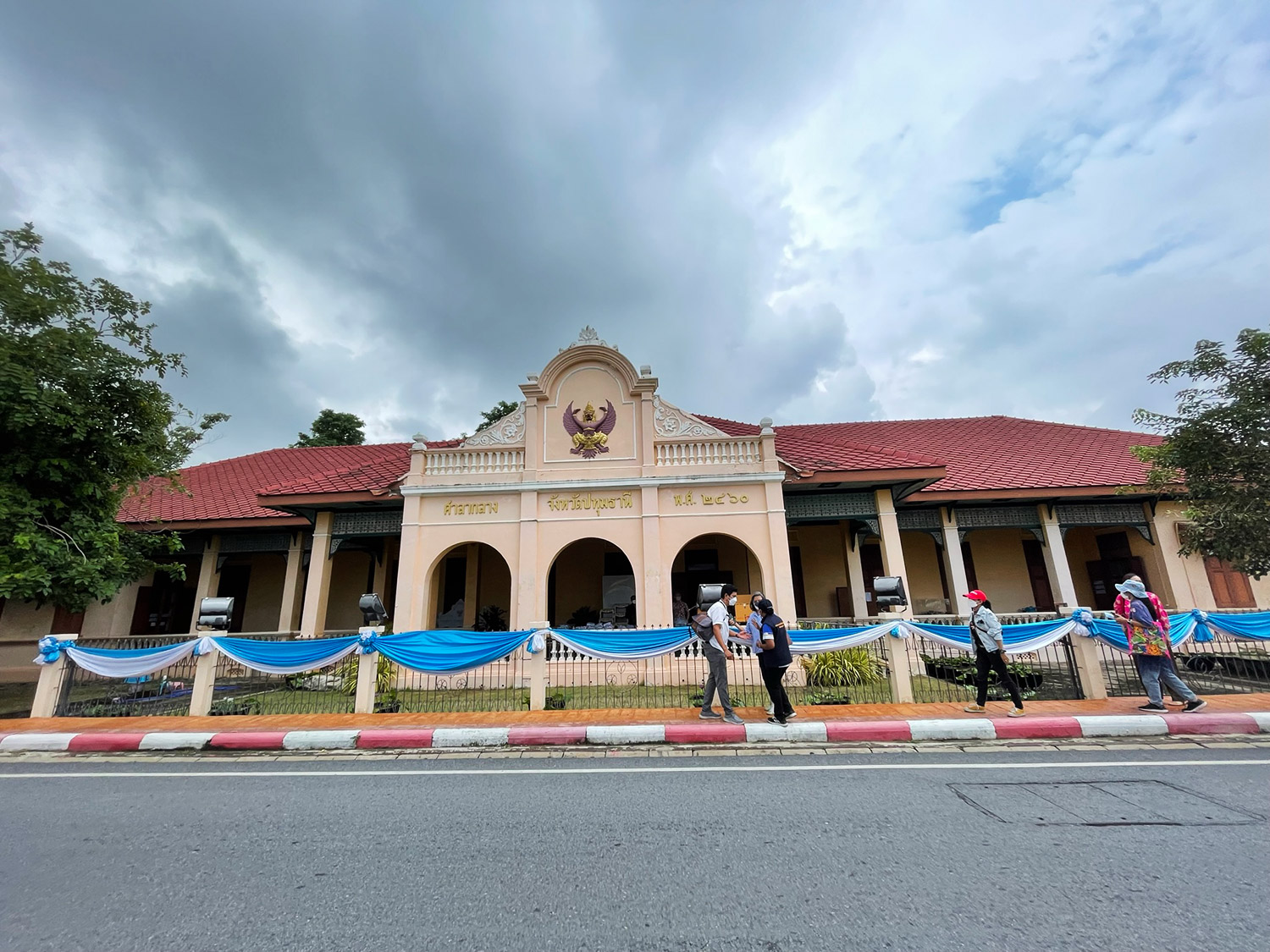 The former Pathum Thani City Hall has been turned into a community museum to show multiculturalism in the region.

A short animated film describes Sam Khok's history before it developed into Pathum Thani in the corridor. By using a magical tunnel, visitors may teleport to the ancient kiln site in the historic settlement of Sam Khok and see how artisans crafted the collection of iconic thick-surface clay jars with narrow mouths and high-quality refractory bricks.

"Sam Khok's soil and clay are excellent for growing crops and making pottery since they're rich in minerals. Sam Khok was once home to three sizeable kilns, making it a significant kiln site in the central region. The Sam Khok earthen jars could keep water cool and were unlike the famed Ratchaburi-style coated dragon jars," Thanat explained.

The Mon people once used bamboo to construct houses that were raised on stilts and covered with a roof made of nipa palm leaves. The area underneath the house was used as an open kitchen and living room. They also transported their goods like earthen jars and rice using a traditional krachaeng boat with a canopy.

Paintings in the adjacent room show Thanyaburi district was covered with rice fields for export as a result of the Bowring Treaty between Siam and Britain, and a network of more than 50 canals were created for cultivation during the reign of King Rama V.

Later, Sam Khok was established as a province in the reign of King Rama VI, and renamed Pathum Thani, which translates to Town of Lotus. Due to the country's post-World War II financial crisis, this neighbourhood has been transformed into an industrial estate. Paintings of Mon-style rituals and Chinese celebrations like Song Khao Chae (sending rice in iced water to the father of the city), the Songkran Festival and Vegetarian Festival are also on display.

We then transferred to a car and drove to Wat Singh, which is located 6km from the historic city hall. This ancient temple was erected during the reign of King Phra Borom Trailokkanat and left in ruins after the first fall of Ayutthaya. It was restored by a group of Mon migrants from Mottama during the reign of King Narai the Great and underwent multiple renovations before the Fine Arts Department added it to the list of national ancient monuments in 1992. 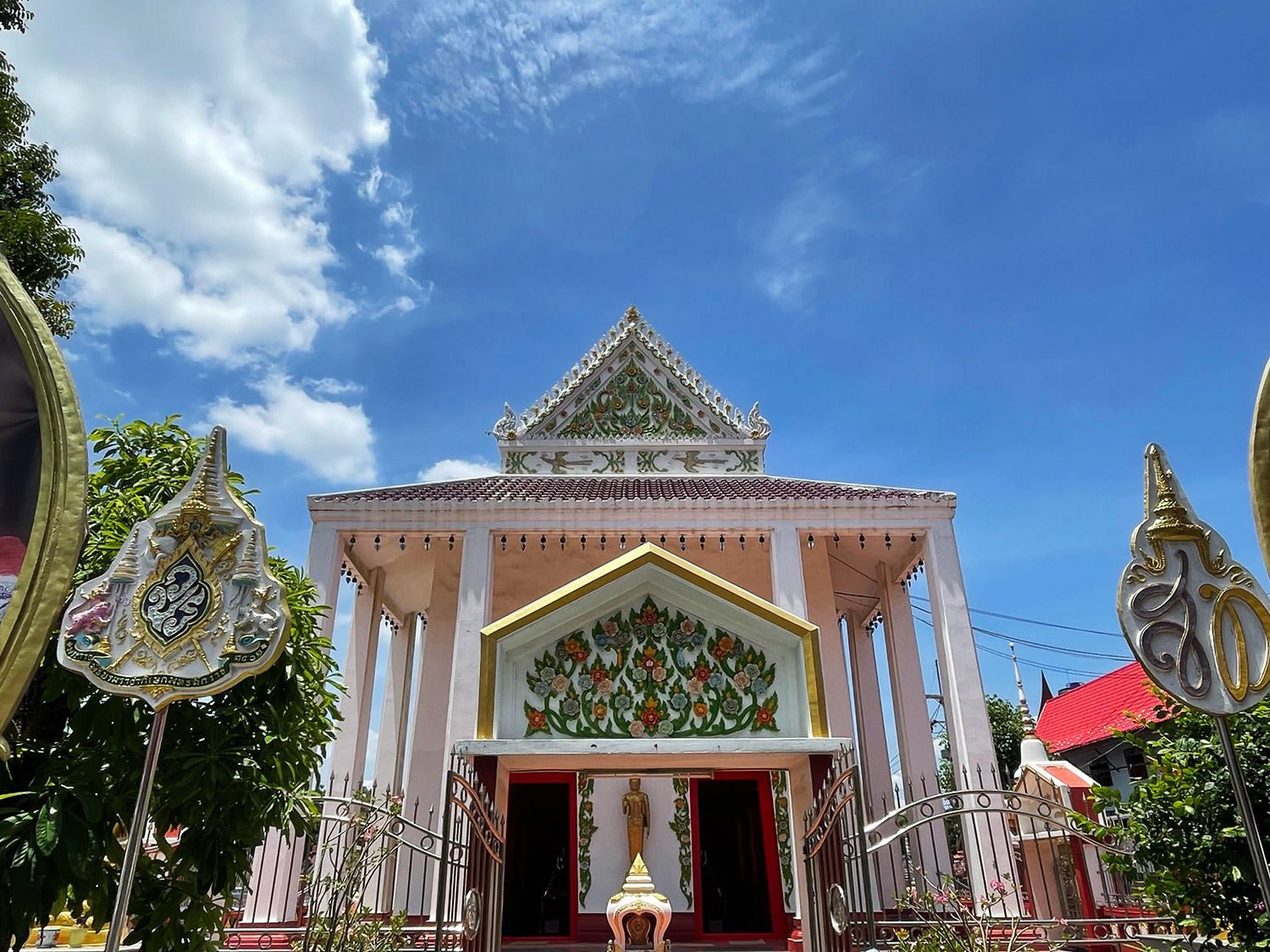 This monastic compound is home to a timeworn abode built during the reign of King Narai the Great and a centuries-old clay pavilion that boasts some faded murals and a sacred Buddha statue in a reclining posture.

A short distance away, the venerable ubosot was constructed in the late Ayutthaya period and features a carved wood gable with mirrors and a junk-like base to convey visitors through the birth and death cycle. Inside, it accommodates a statue of Luang Pho Phutta Rattanamuni in a posture of subduing Mara, who has a smiling oval face, a prominent nose, large ears and a lean body.

Former abbot Luang Pho Phraya Krai's towering urn, which is adorned with flower-like stuccos in a mixture of Mon and Thai-style art, stands in front of the Ayutthaya-style vihan. It's decorated with gilt teak window frames and houses an Ayutthaya-style statue of Luang Pho Phutta Sirimasaen made from red sandstone.

Ong Ang Ancient Building is located across from Wat Singh. It's an archaeological site with a ruined kiln that serves as a testament to the early Mon settlement in this region during the Ayutthaya period. Aside from orange jars with small mouths, a unique edition of basins, mortars and pots with narrow mouths were also created by Sam Khok kiln and sold to communities from Sam Khok to Bangkok. They were simple but long-lasting.

We moved to Wat San Chao, which was built in the reign of King Rama III on the bank of Chao Phraya River. The ubosot houses a 232-year-old statue of Phra Phuttarattana Maha Phrom in the Ayutthaya style. According to Mon beliefs, the statue has crimson lips, huge ears and thorny hair to signify Buddha still being alive.

Walking through a maze of food stalls, visitors will find a sacred Chinese shrine which was built during the reign of King Narai the Great. Legend has it that Ru, a Mon monk, was put to the test by Chao Noi Maha Phrom, a black magic specialist who sailed from Chiang Mai to the mouth of Klong Chiang Rak. The prince then built a wooden shrine to honour the monk and drank holy water here, praying for a safe journey.

Our journey came to a close at Wat Bang Luang, where we prayed to a bronze statue of Phra Prathum Thammarat for protection. This is one of four Buddha statues, which King Rama V specially created to donate to the cities of Samut Prakan, Nonthaburi, Pathum Thani and present-day Phra Pradaeng.