The cloudburst dissipates as we stroll through the neighbourhood of Phra Nakhon and the Sun now shines brightly in the clear sky. Despite the upcoming change in weather, this is a wonderful time to get outside and go sightseeing. 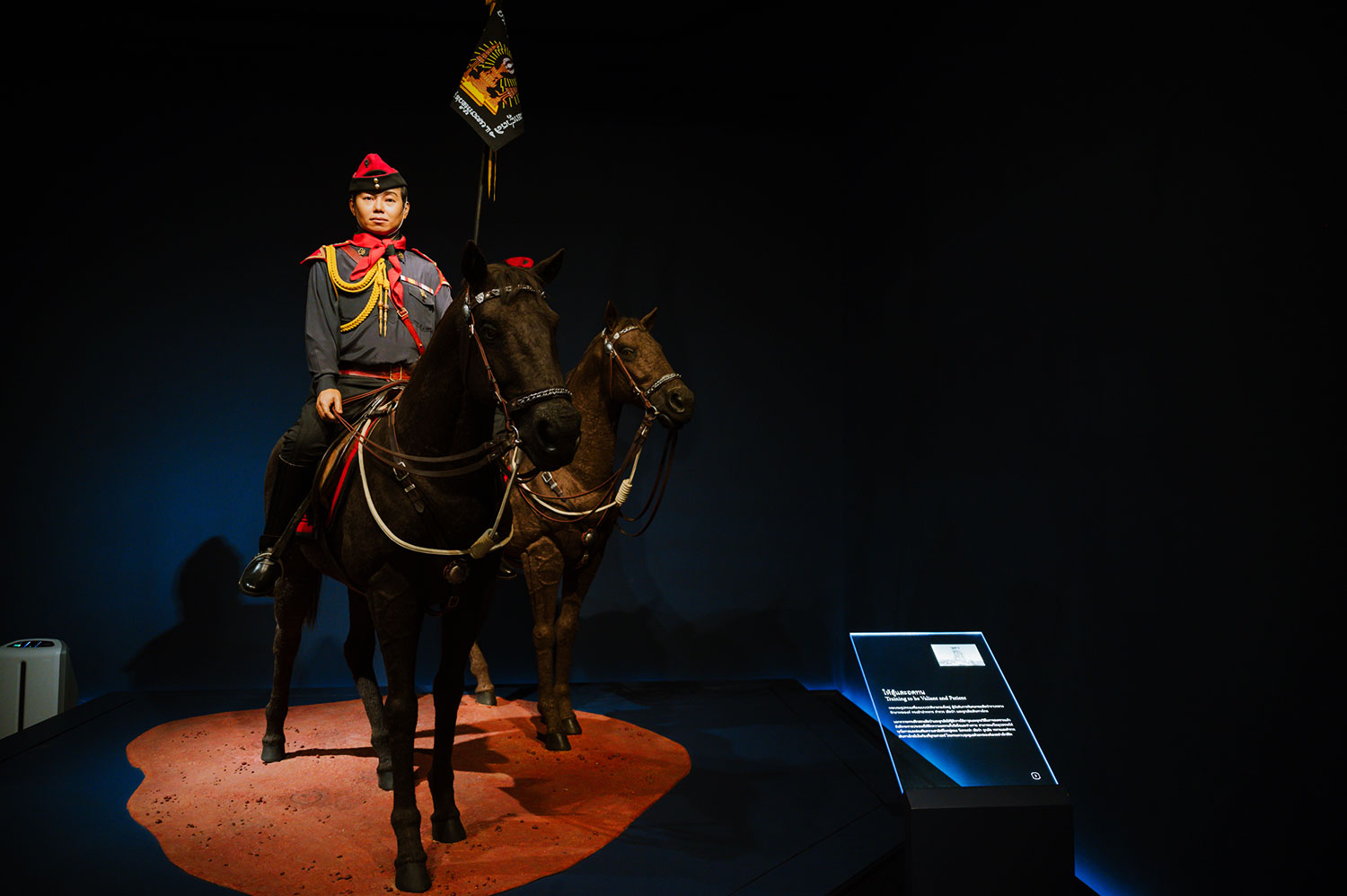 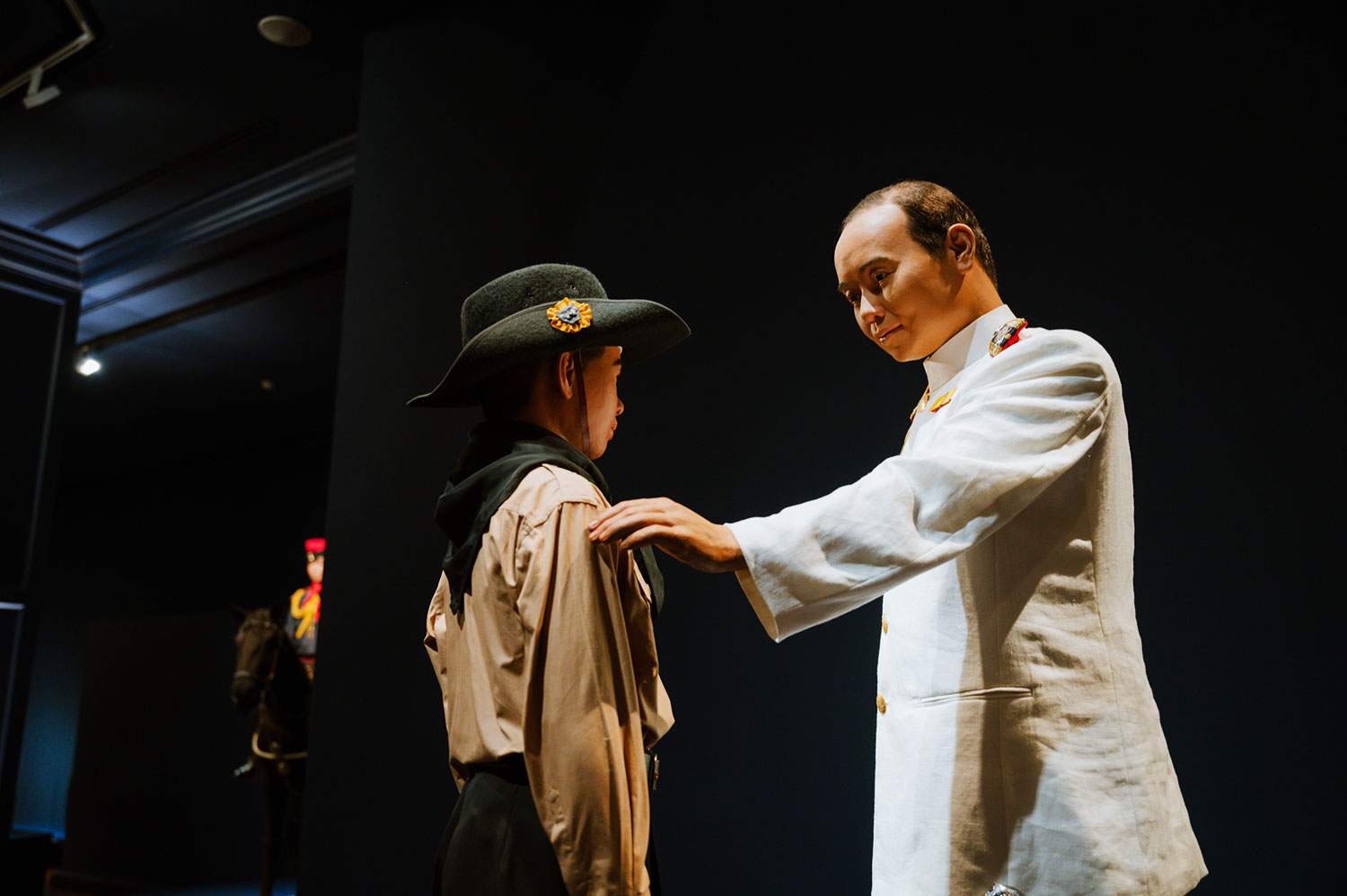 Sitting in a café and gazing out the window, a thread of historic structures, classic shophouses and bustling old marketplaces will transport travellers back in time to the day when Siam was modernising itself with contemporary innovations during the transition of the reigns of King Rama V to King Rama VI.

Part of the "Secret Of Phra Nakhon" tour that is organised by KTC, the first stop is the King Vajiravudh Memorial Hall to learn about how the country evolved before and during World War I. Standing in the compound of the National Library of Thailand, it was established in 1981 by ML Pin Malakul to commemorate King Rama VI's 100th birthday.

The gallery on the 3rd floor displays "The Philosopher's Legacy King Vajiravudh" exhibition, which was revamped in 2019. With elegant modern decoration and new lighting design, it looks like Madame Tussauds, with a collection of more than 10 lifelike fibreglass figures depict King Vajiravudh doing his regal responsibilities.

Behind the entrance, visitors are greeted by a figure of King Vajiravudh dressed in a Durham Light Infantry uniform. He was trained at the Royal Military Academy Sandhurst before serving in the British infantry. Upon his return to Thailand, he gave money to the families of fallen World War I British soldiers and King George V appointed him an Honorary General of the British Army in recognition of his generosity. 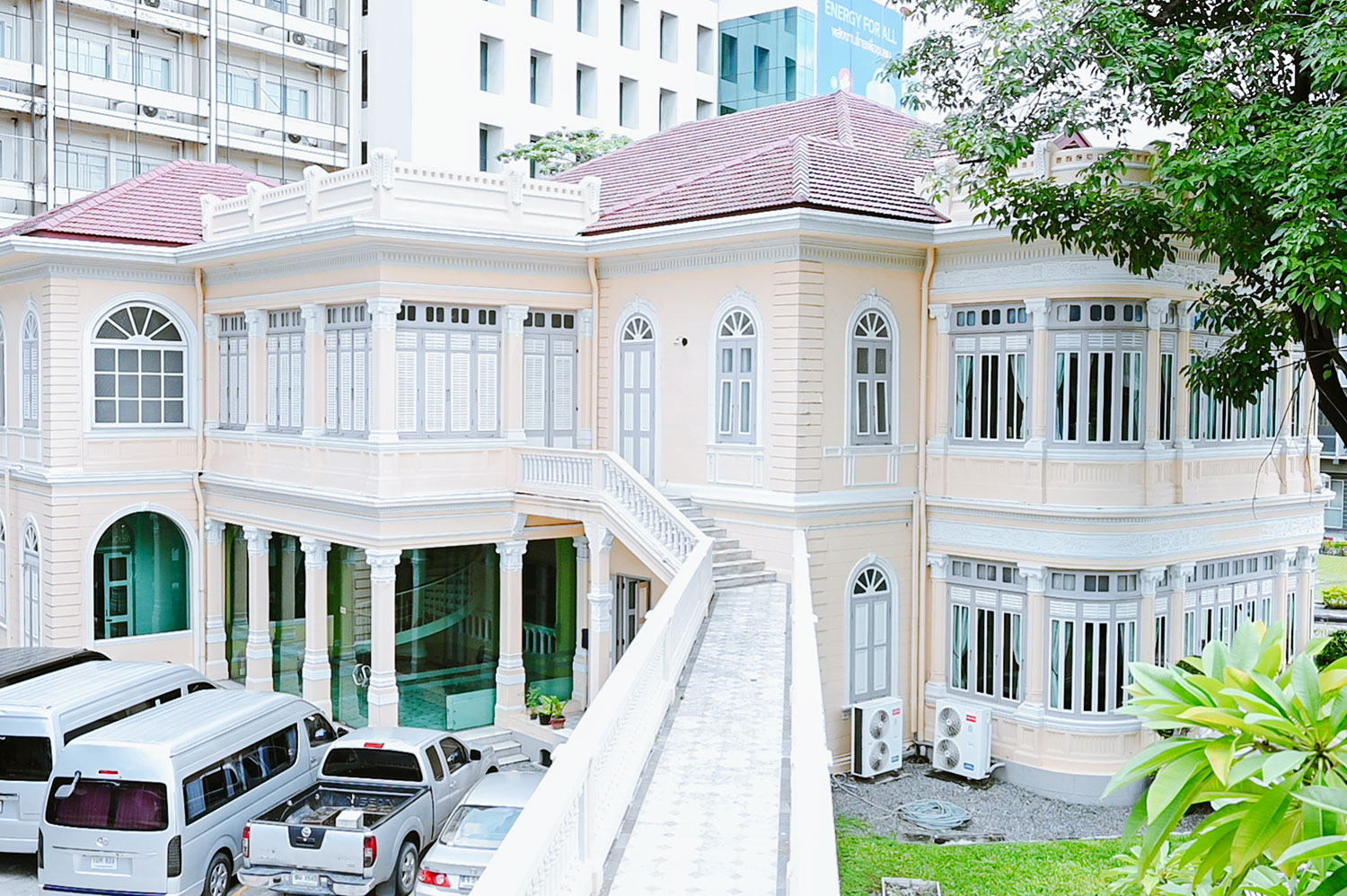 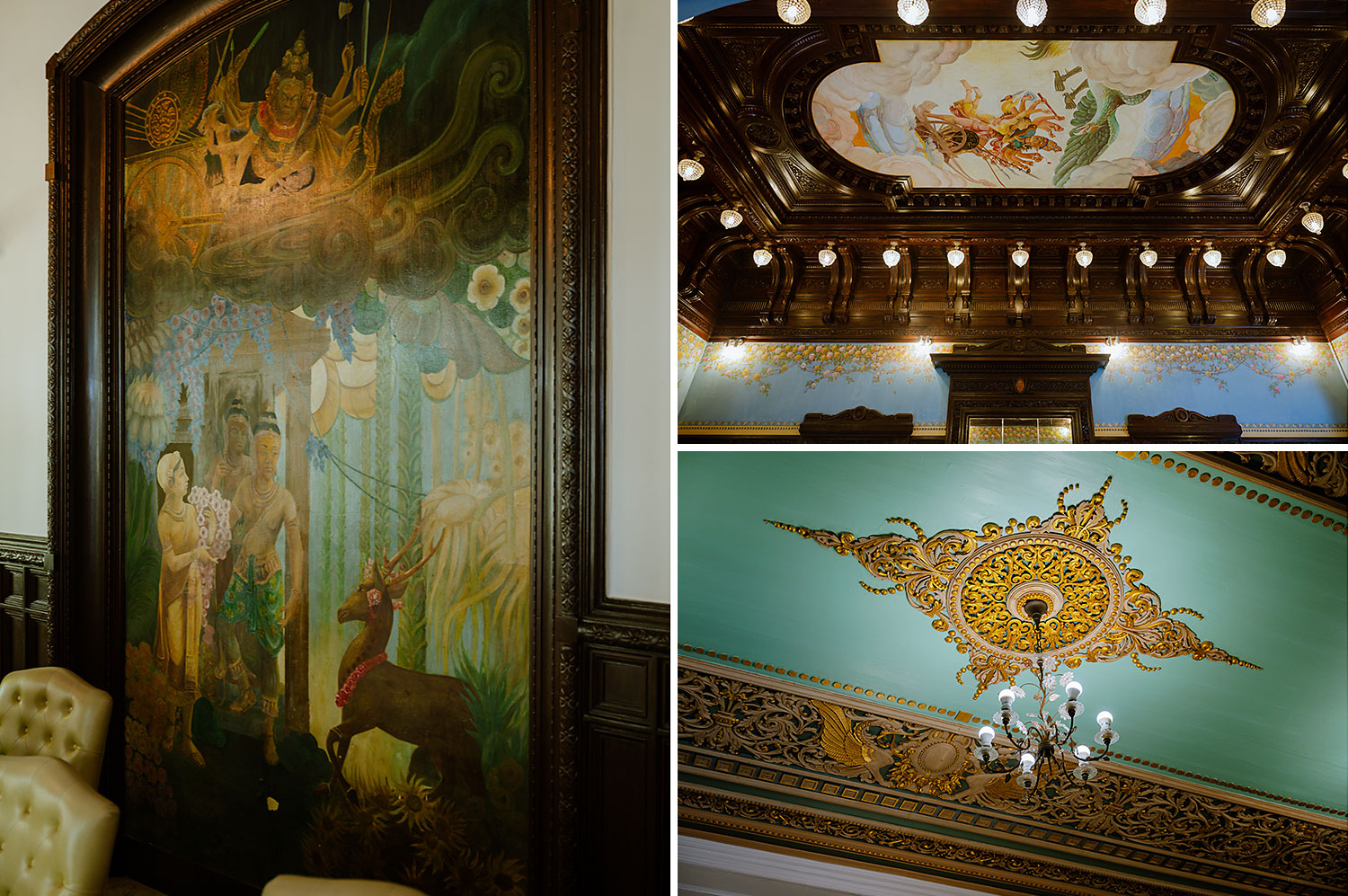 A collection of photographs illustrate the way of life at that period. You'll see that a clock tower was built in response to King Rama VI's call for the adoption of universal time. The Royal Train was launched as a result of the union of the Northern and Southern Railways. King Rama VI established the Football Association of Thailand in 1916, and in 1925 it became a member of the Federation Internationale de Football Association (FIFA).

Visitors can view a foundation stone laying ceremony for Chulalongkorn University's first building, which took place in 1915 to mark the beginning of higher education in Thailand.

Outside of the conventional military structure, King Rama VI established the Wild Tiger Corps in 1911 in order to train a force of peasants to guard Thailand's southern and eastern borders against Western nations. Alongside, visitors can act like a witness to his second coronation, which took place in the same year and was attended by royals and presidents from 14 countries.

The adjacent red room is adorned with a collection of black-and-white photographs depicting the growth of financial institutions, public health, King Rama VI's coronation, which was held in the Charoen Krung district and gave merchants and villagers a direct avenue for complaint, and Thailand's first airport, which was once housed in the Royal Turf Club of Thailand.

On the 2nd floor, the Ramjitti Library is a tranquil place where bookworms can find a rare edition of plays and royal literature as well as a record of 6,432 family names King Rama VI bestowed to officials and members of the public. Also on display is a pile of his private books like The Book Of The Numerical Saying, which has the handwriting of monarchs on its cover. 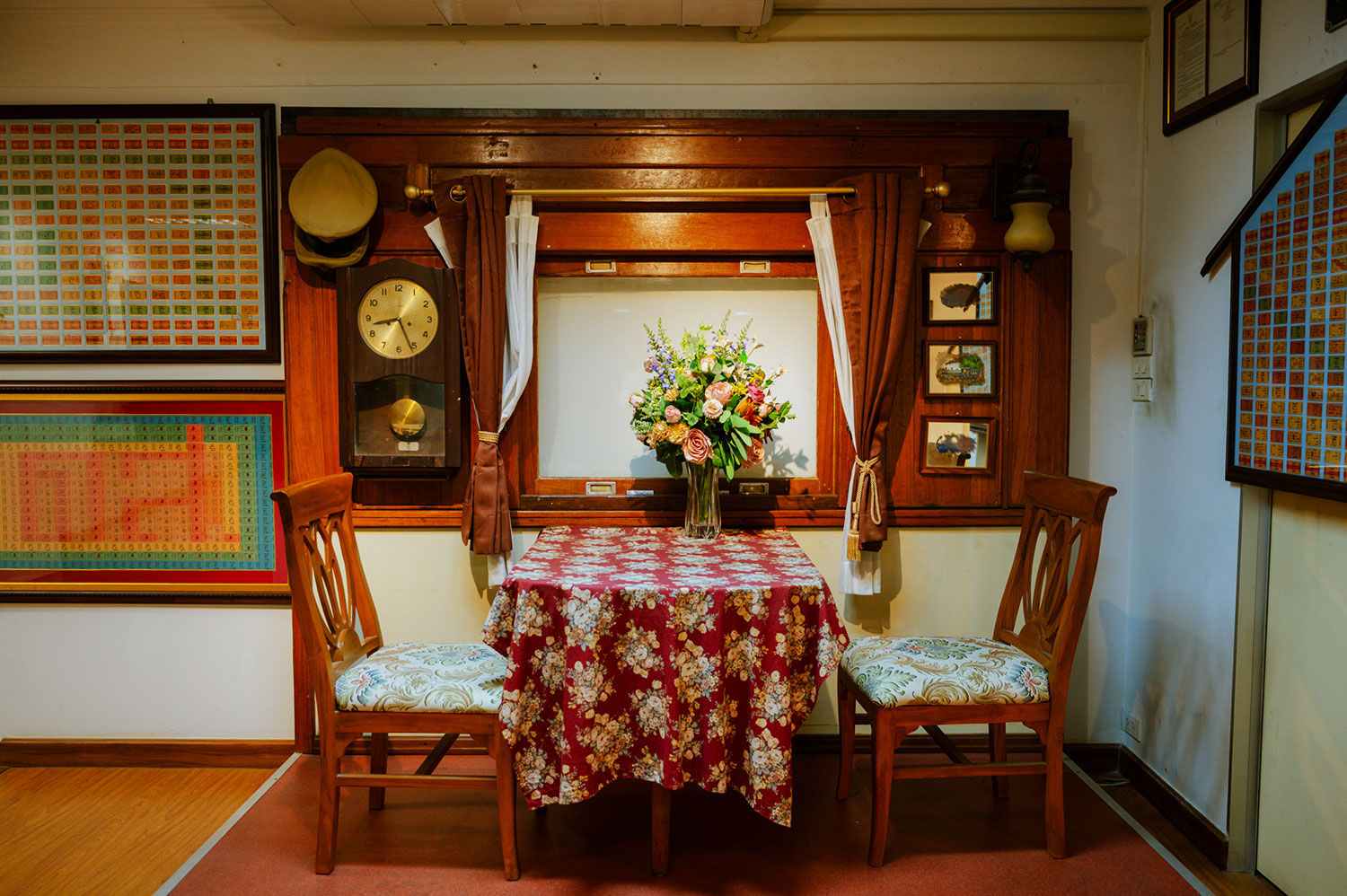 The Thailand Railway Museum tells its history through a wide collection of antiques.

Just a five-minute drive from the memorial hall to Nakhon Sawan Road, the 126-year-old Seng Chong store has been a pioneer in Bangkok's leatherware business. As Western fashion expanded to Thailand, Chinese craftsman Liu Sengchong from Guangdong set up his own shop in Charoen Krung and started selling a collection of handcrafted leather shoes in 1896.

He later expanded his product line to include leather equestrian gear such as saddles, boots and bridles, long favoured by cavalrymen and riders.

The store relocated to its current site in 2013 and is presently operated by Artrit Paditbatuka, a fourth generation owner.

"Hakka people have specialised in craftsmanship. We were the first leather business in Bangkok that manufactured a selection of horse accessories for the royal court. Because of their affordability and durability, our products are more appealing to Thais with tight budgets. Now, we've developed our designs and added fashion accessories to our product line-up," Artrit said.

To ensure quality, the store only uses genuine leather from local manufacturers, Italy and Pakistan, as well as buffalo and sheepskin. Visitors can check out the latest collection of shoes for men, belts, wallets, bags and dog training supplies.

"The outside of shoes are constructed of cow leather, while the inner is lined with soft sheepskin and thick components are made of buffalo leather. We also provide customers with after sale service," Artrit said. 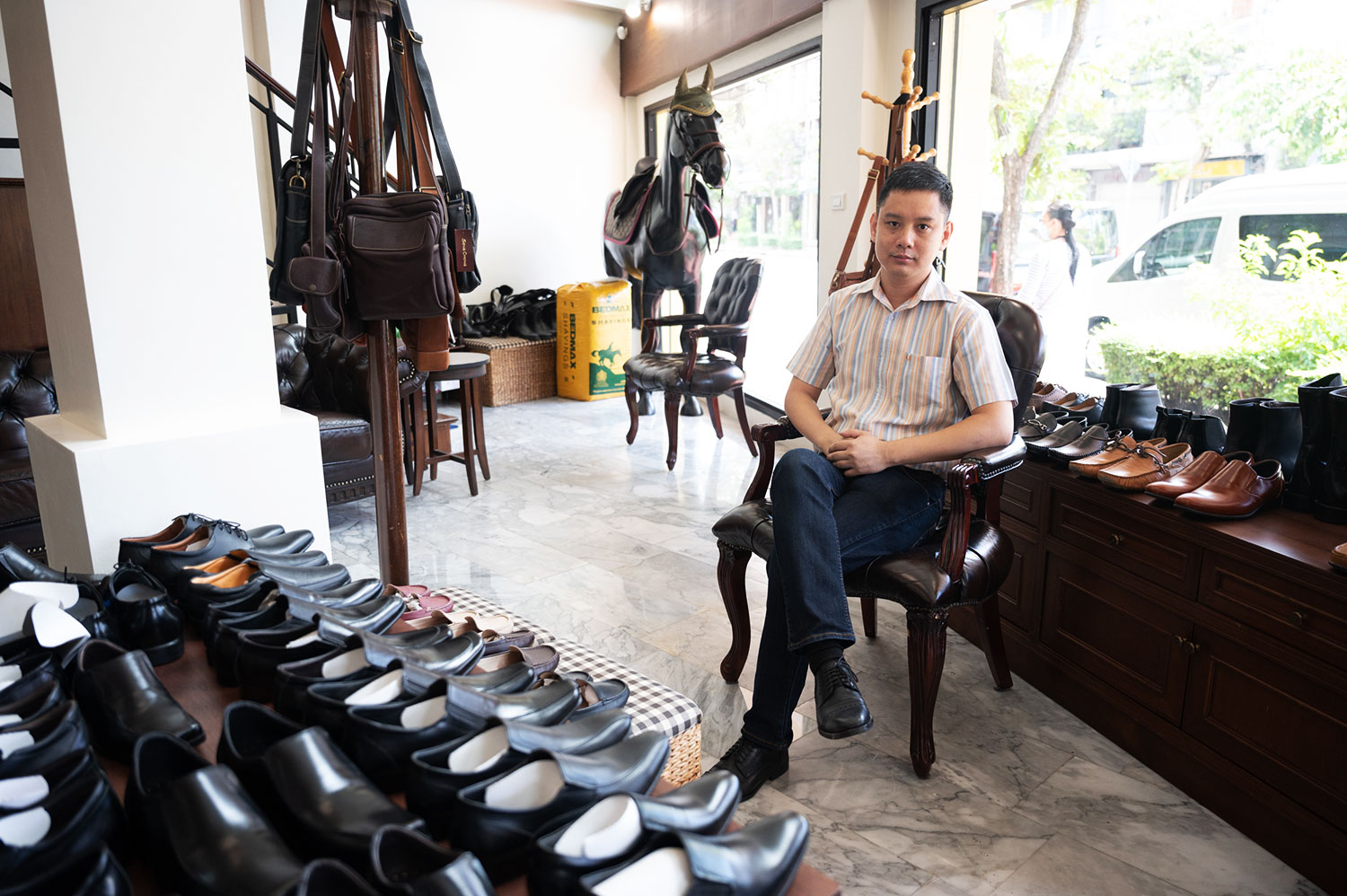 Artrit Paditbatuka is in charge of Seng Chong, known for its quality equestrian equipment.

Turning left to Krung Kasem Road, we arrived at the Raweekanlaya Bangkok Wellness Cuisine Resort, just in time for lunch. A traditional Thai supper is served in a dining room with views of a swimming pool and a lovely courtyard with a towering tree, local plants and flowers, giving us the feeling that we are at home.

Phranom Tat Phungbun Na Ayudhya, the royal governess of King Vajiravudh, once lived in this Neoclassical-style compound and both of her sons had significant historical roles. Maj Gen Phraya Aniruthdeva (ML Fuan Phungbun) served as the rector of the Royal Military and the Master of Ceremony, and ML Fua Phungbun became the youngest member of the Siamese nobility to hold the rank of chaophraya, or most senior commissioned officer.

"King Vajiravudh allocated his land to construct this home for Phranom Tat. It was made of wood and cement and the design looks simple to reflect her unambitious characteristics. After the house depreciated, her sons restored it to mimic the original and expanded its landscapes before the TCC Group turned it into a boutique resort and restaurant in 2017," said Thanat Bhumarush, a secretary of the Thonburi Community Historical Information Center, who served as a special guide. 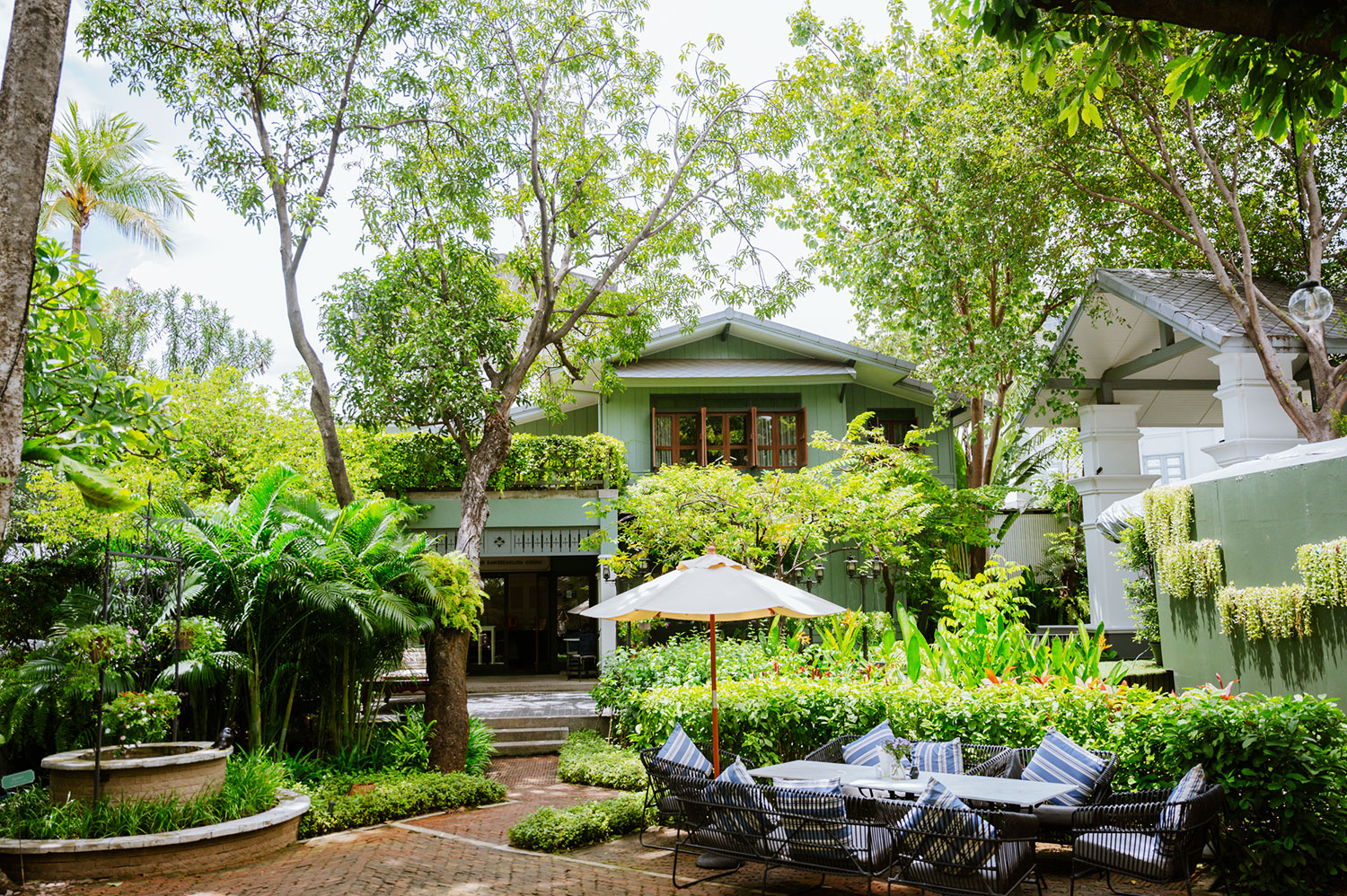 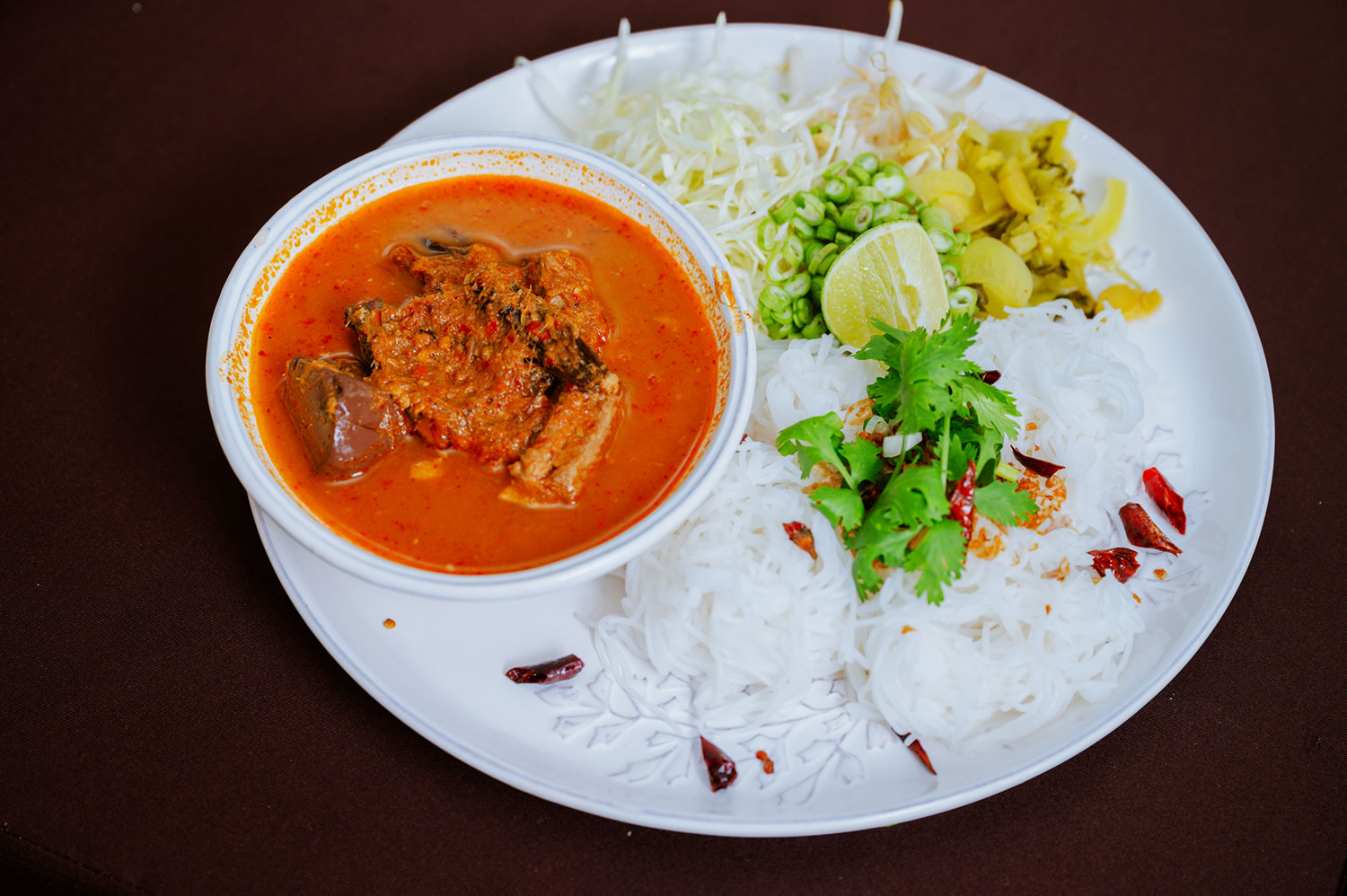 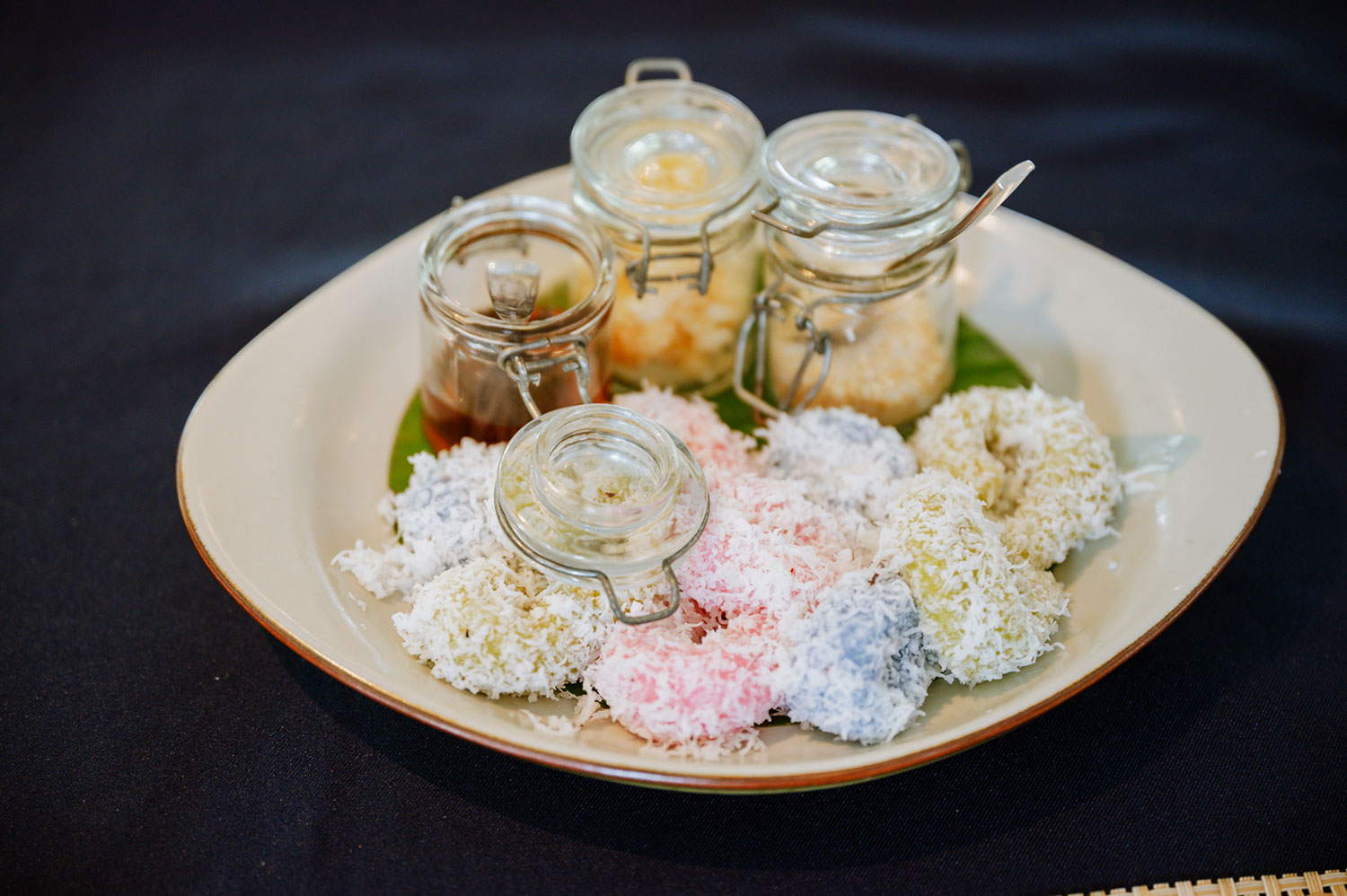 "Thai perfume originated during the reigns of King Rama IV and V. It was extracted from flowers and herbal plants for use in the palaces. This celebrates local wisdom modifying Western perfume techniques to fit our lifestyle. Western perfume has a strong scent, but Thais prefer something refreshing and soft," Tivaporn said.

"Herbs, plants and flowers provide health benefits. For example, oil from small Indian civets may nourish the heart and stimulate the nervous system, while kaffir lime and Chinese borneol can lift your spirits and help you relieve stress, so you can sleep better."

Leaving the resort, we continued to Ban Phibuntham, which is situated in the Ministry of Energy. Formerly known as Ban Nonthi, King Rama V gave Phraya Anurakratchamonthian (MR Pum Malakul) this 3 rai plot of land to erect a house in 1897 before extending its landscape during the reign of King Rama VI.

With a 150,000 baht budget, it was designed by Italian architect Ercole Manfredi to boast an eye-catching fusion of classic revival architecture and Italian Renaissance art. Stunning gilded stuccos of plants and nok karaweks with a dragon's head and lion's claws are used to embellish the ceiling of the first building.

"Ban Nonthi was severely damaged by explosions during World War II, and his successor sold it to Plaek Phibunsongkharm in 1955. The house was renamed and rebuilt to use as a reception hall for state visitors, including US President Richard Nixon," Thanat said.

Travelling a little farther, the second building is home to a meeting and reception area whose walls are covered with beautiful paintings by Italian artist Carlo Rigoli showing some scenes from the Ramakien epic, angels in heaven, and Ramasoon pursuing Mekhala.

The sightseeing tour came to an end at the Thailand Railway Museum. Located on the ground floor of Bangkok Railway Station, it was opened in 2015 to showcase a wide range of old railroad artefacts and instruments from around Thailand.

There's classic dinnerware from the historical Railway Hotel in Hua Hin, along with telegraphs, vending machines and absolute block systems that limited the number of trains on track to ensure safety. The 2nd floor is designed to resemble a train cabin and accommodates a collection of steam and diesel locomotives as well as colourful vintage placards in various designs.