Illuminating the past
Travel

Last Saturday, Bangkok's sky was illuminated by a series of grandiose firework displays to mark the start of the 16-night Vijit Chao Phraya festival to promote Thailand's tourism during the Asia-Pacific Economic Cooperation (Apec) 2022 summit.

It is a collaboration between the Tourism Authority of Thailand (TAT) and its partners in both government and private sectors to support businesses with nocturnal activities such as boat excursions, dinner cruises, hotels and riverside restaurants. This is part of Colourful Bangkok, one of Bangkok Metropolitan Administration's 12 monthly festival projects.

"This is the most extravagant light event along the Chao Phraya River. After the country fully reopened to international tourism, this initiative is designed to welcome tourists back to Thailand during the high season as well as delegates to the Apec Economic Leaders' Week from Nov 14-19," said Phiphat Ratchakitprakarn, minister of Tourism and Sports.

The Comm Art Production is in charge of creating a series of extravagant multimedia presentations focusing on vibrant ambiences and waterside communities around the majestic Chao Phraya River.

"We hope to promote Thailand's tourism through Vijit Chao Phraya, while Apec summit leaders, their spouses and delegates will stay in hotels or visit various locations along the Chao Phraya River. The idea begins from historic bridges before expanding to include additional ancient temples and historical locations to highlight Thailand's history, distinctive architectural arts and multiculturalism," said Sangtham Chunchadathan, marketing manager of Comm Art Production. 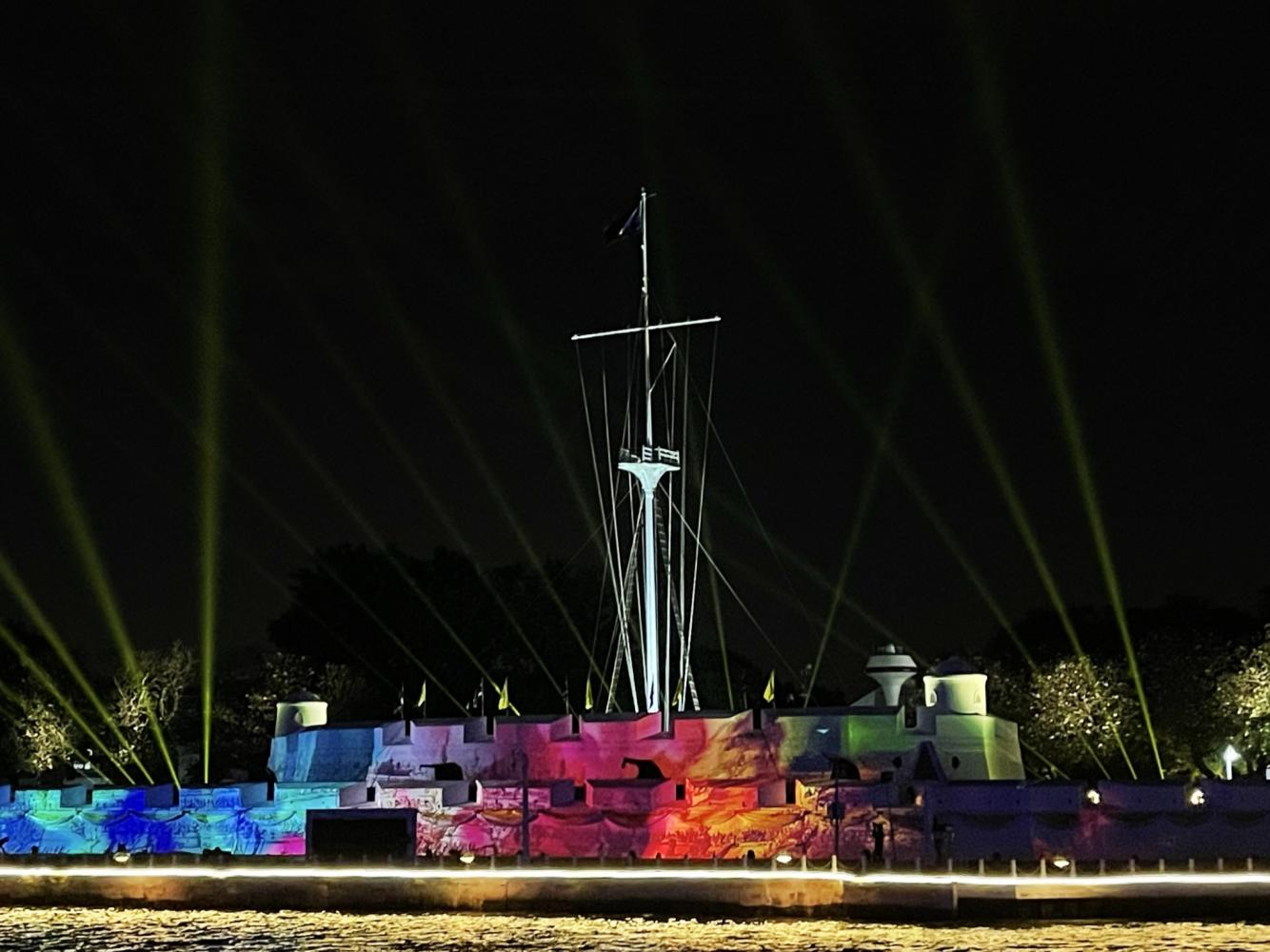 "This event will bring colours to the Chao Phraya River. If the response is favourable, TAT might make it an annual festival to boost business opportunities for boat trips, dinner cruises, restaurants and hotels. They might include these extra attractions to their schedule or create more nighttime activities during the high season."

The show begins at 7pm and you may kick off your cruise at Rama VIII Bridge with a brilliant laser light display to commemorate His Majesty King Bhumibol Adulyadej's idea of creating a new bridge to relieve traffic congestion between Bangkok and the Thon Buri side of the Chao Phraya River.

With a concept of "Open, Connect And Balance", the five-minute laser show interacts with the framework of an asymmetrical bridge that combines Thai architecture with modern technology, while a greeting message will be displayed on a single Y-shaped pylon synchronised with music by The Sound of Siam.

Standing at the mouth of Klong Bangkok Yai, Wichai Prasit Fort has turned its white walls into a massive screen onto which a striking seven-minute video mapping with light and special effects is projected.

Visitors will be transported back in time to the Ayutthaya period when the Chao Phraya served as a major transportation for diplomatic missions and sea merchants from China and Europe. It was built as the Wichayen Fort during the reign of King Narai the Great, and after the fall of Ayutthaya in 1767, King Taksin the Great established Thon Buri as the new capital, making it a strategic location. 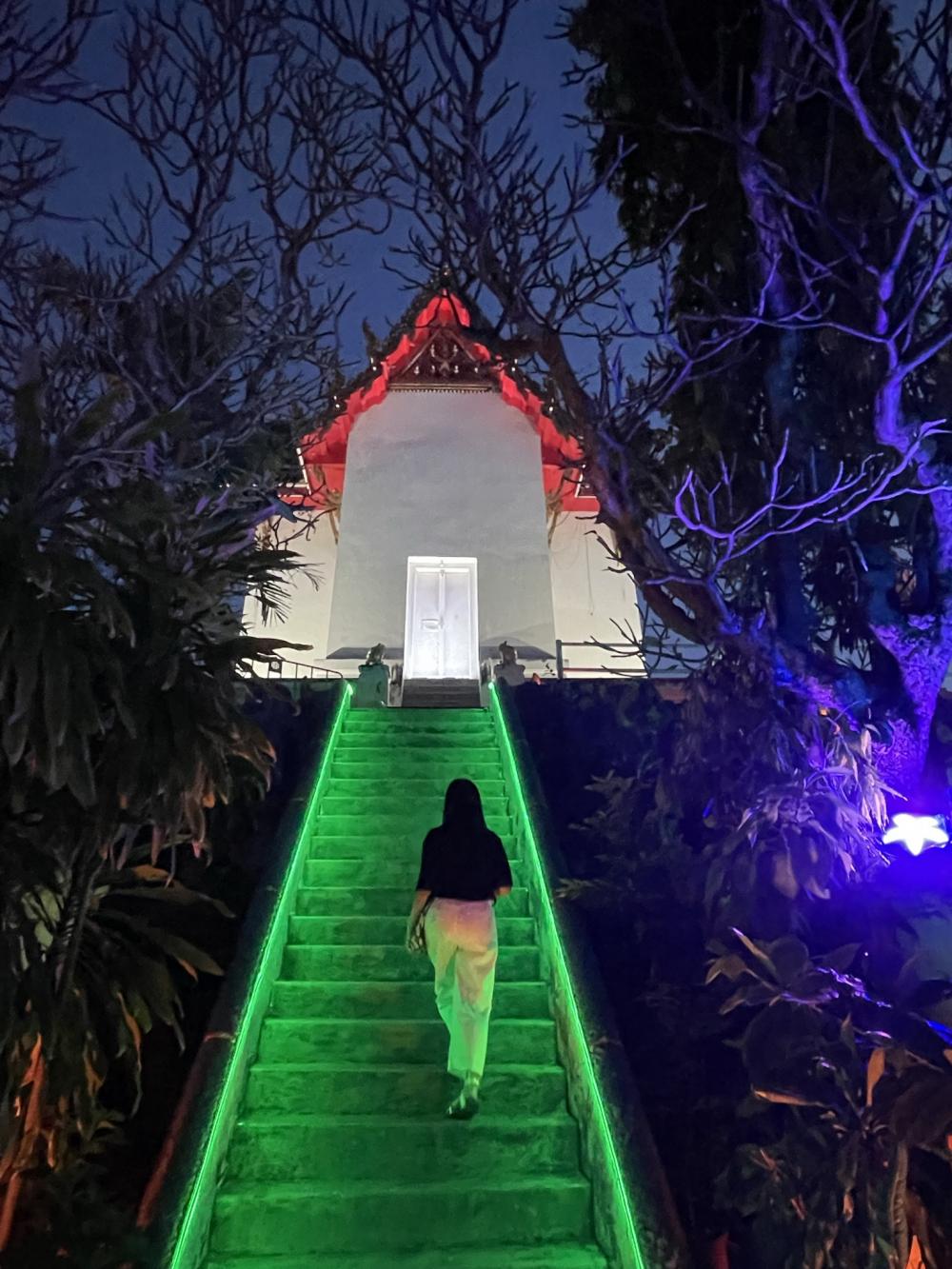 Pilgrims can climb a recreated Meru Mount to pay respects to Lord Buddha's imprint and shadow.

Visitors can envision themselves in the midst of the Franco-Siamese War in 1893 when Siam agreed to relinquish certain territory in Laos to France. This led Adm Prince Abhakara Kiartivongse (also known as the Prince of Chumphon) to establish the modern navy of Thailand.

An adjacent stage takes over the front of Wat Kalayanamit Woramahawihan for a 10-minute contemporary cultural performance with special effects to portray the tale of the Kudi Chin community, where Buddhist temples, a Catholic church and Chinese shrine have coexisted for centuries.

It's like we've stepped into a traditional temple fair or Thai celebration to witness a lively multicultural display involving shadow puppets, a dragon dance troupe and Hua To Klong Yao. Visitors can also see the royal barge procession in which a replica of Suphannahong floats past the temple as fireworks brighten the dark sky to simulate a meteor shower. This show represents three welcoming Thai characteristics -- happiness, friendliness and smiles.

Another highlight is the five-minute Illumination Light Show & Effects at Buddha Yodfa Chulaloke Bridge, which was built during the reign of King Rama VII. The SNC-Lavalin railway was converted into a bridge that connected the Phra Nakhon and Thon Buri sides, transforming this area into a major commercial centre. 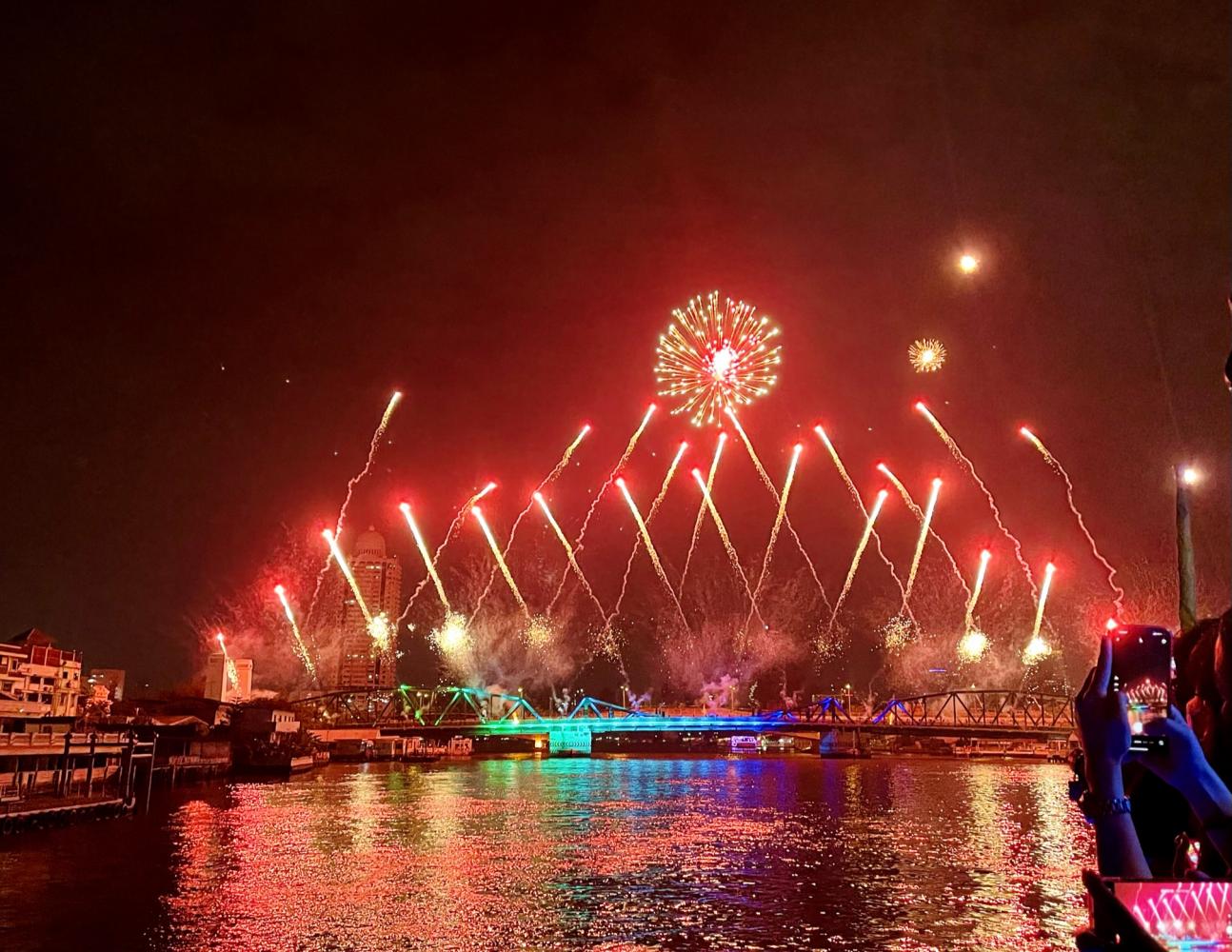 The Illumination Light Show & Effects is on view at Buddha Yodfa Chulaloke Bridge. 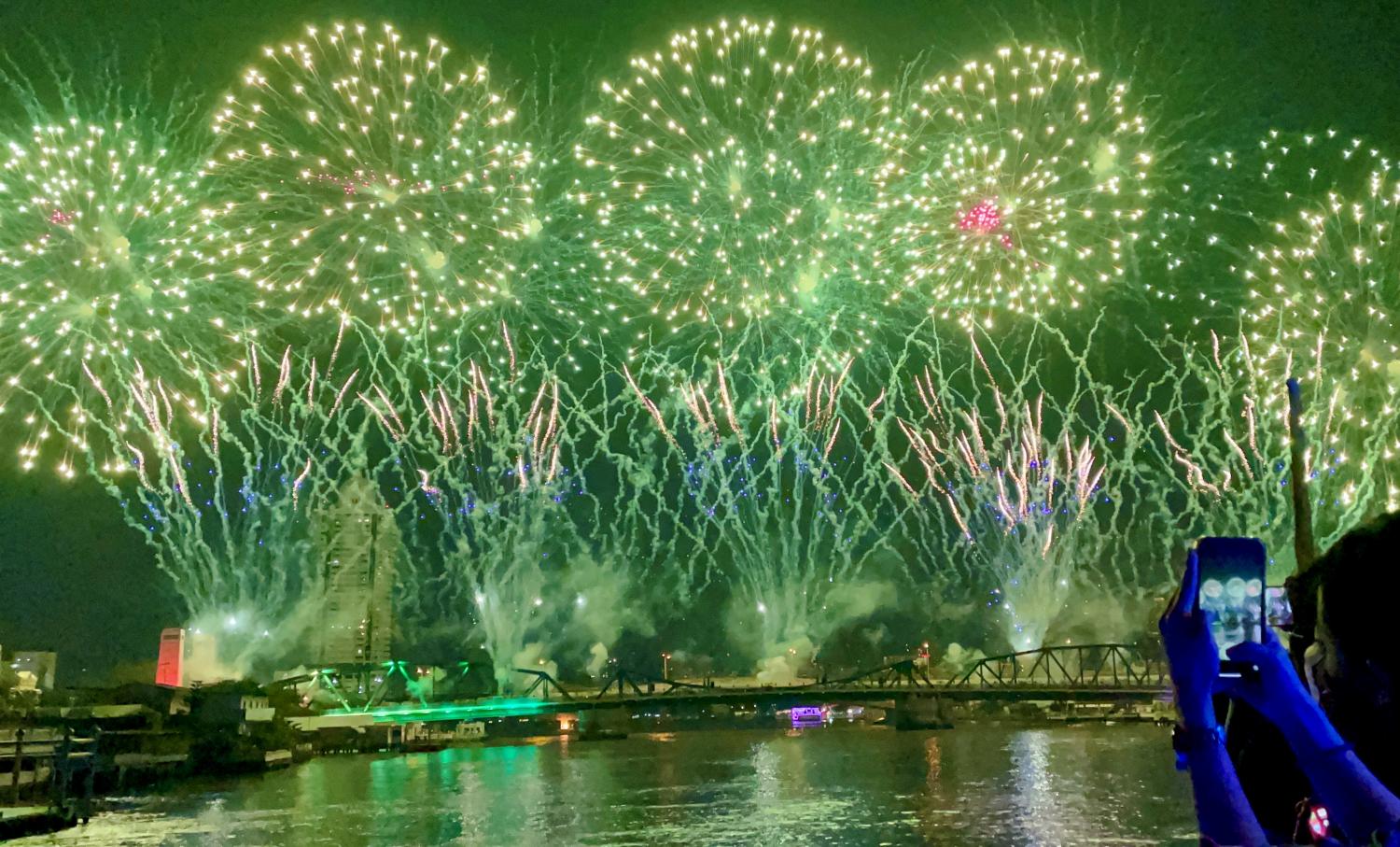 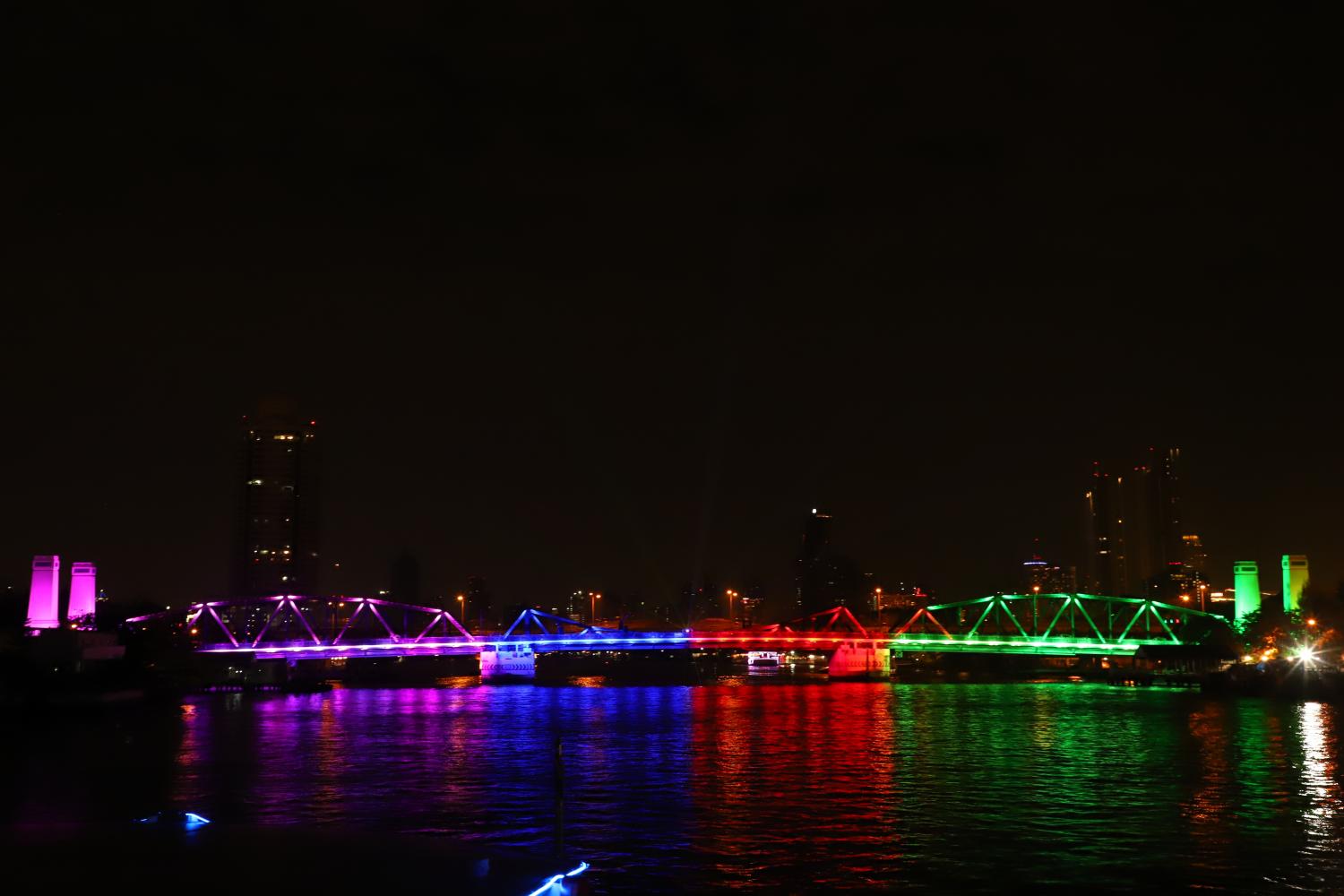 The sounds of trains, planes, boats, musical instruments and cookery are employed in the presentation to create a sense of delightful travel experiences and local life in each place. In order to evoke the cheerful festive spirit over this bridge, TAT will shortly update a schedule of the lavish firework displays via thailandfestival.org.

River City Bangkok is a popular art and antique shopping centre that received the Outstanding Architectural Design award from the Association of Siam Architects in 1984, giving it a perfect blend of old and new.

A seven-minute video mapping presentation is projected on its façade to demonstrate how Thai culture is promoted through soft power like food, films, drama series, khon mask dance performances and festivals.

The boat ride ends at Iconsiam and visitors can enjoy the six-minute Iconic Multimedia Water Features that span over 400m. This longest water dance show in Southeast Asia blends innovative light, sound and multimedia technologies to reflect the beauty of traditional Thai customs and culture.

As part of the Iconsiam Bangkok Illumination 2022, a 20m-tall Christmas tree symbolises the light of the future, employing renewable energy from solar cells in a hybrid form to reduce power usage and carbon footprint. 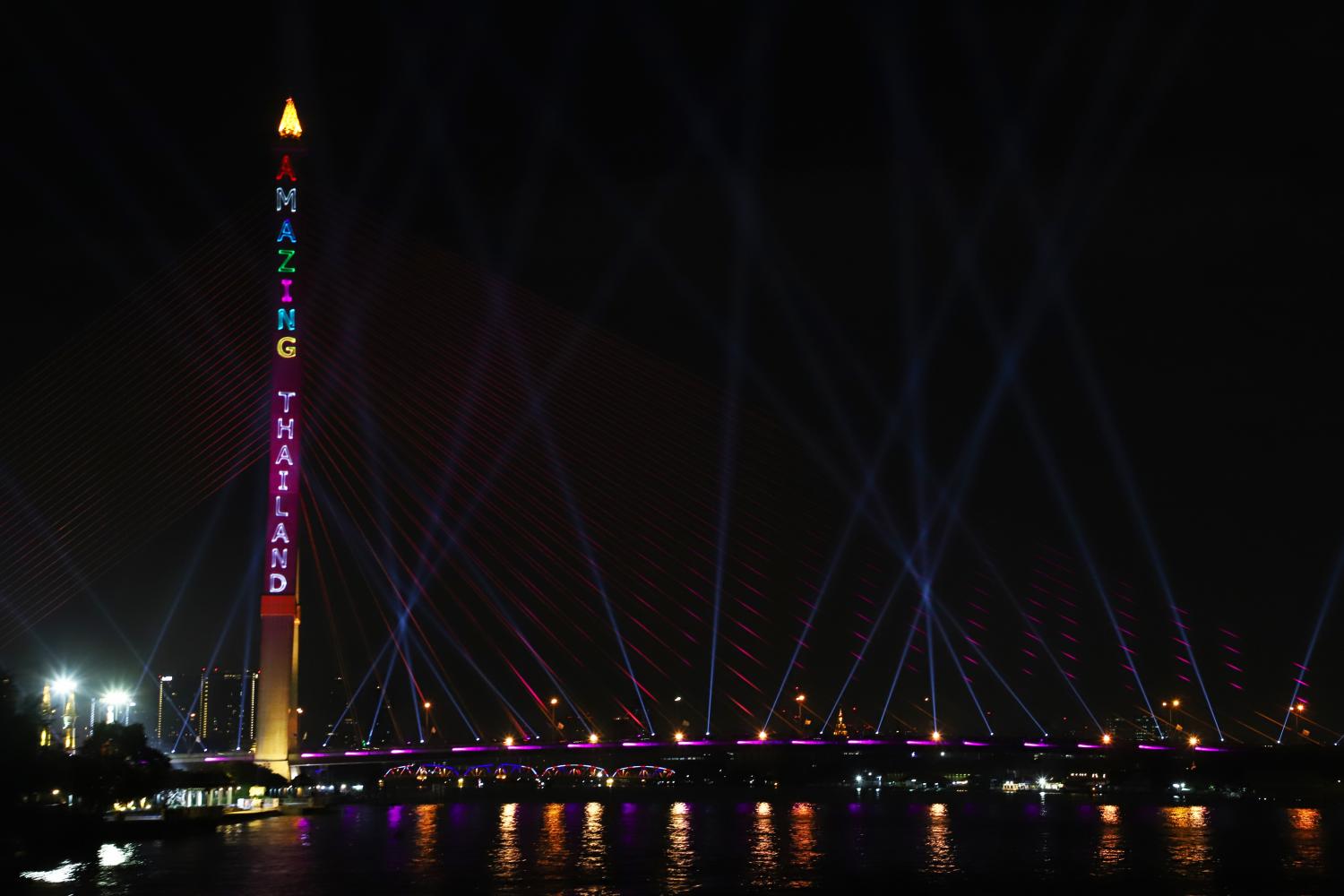 Back on land, visitors can join a walking tour in Talat Phlu, where the Creative Economy Agency has joined hands with Urban Alley to organise the first series of the Hidden Temple multimedia touring exhibition until Sunday.

As part of the Unfolding Bangkok initiative, it will illuminate three historical temples at night to shed light on the neighbourhood's history and unique Thai architectural arts that link to Buddhist beliefs. On view are projection mapping presentations and architectural lighting designs created by artists from DecideKit, Architectural Lighting, and LightIs and Friends. On weekends, local students present cultural acts and specialists lead cycling tours.

Under the Pilgrimage concept, visitors can start at Wat Intharam Worawihan, which was built in the Ayutthaya period. King Taksin the Great renovated it and his relics are believed to be installed there. The temple underwent another major uplift during the reign of King Rama III and a new ubosot was erected to enshrine a statue of Phra Phutthachinnavorn.

Stunning video mapping presentations are projected on the walls of three small vihans allowing visitors to imagine themselves on a trip to Sri Lanka. The first vihan is designed to look like Lord Buddha's dwelling, with murals showing his everyday things. Visitors can worship a reclining Buddha statue against a blooming projection-mapped lotus backdrop. 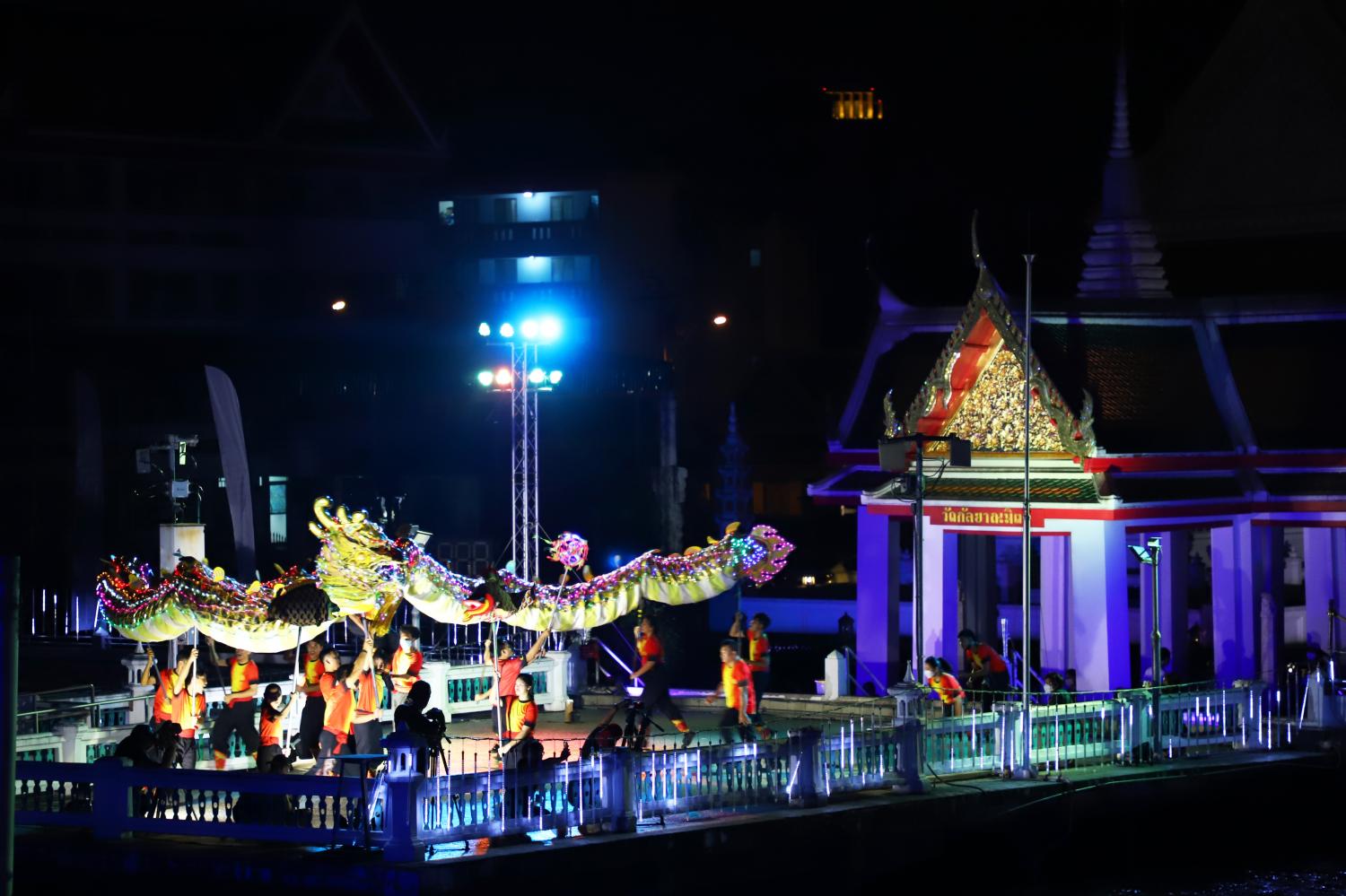 A cultural performance with special effects at Wat Kalayanamit Woramahawihan. 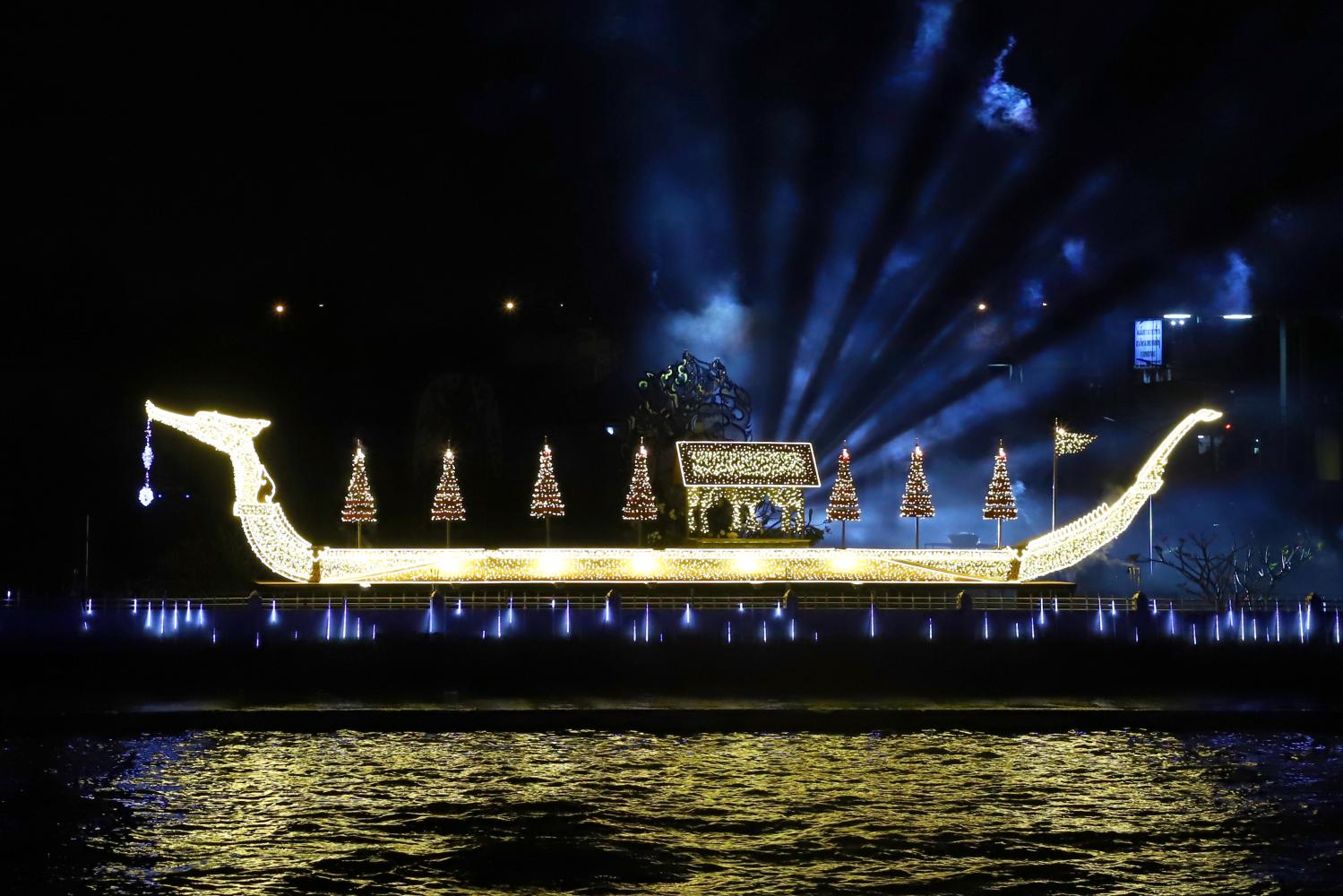 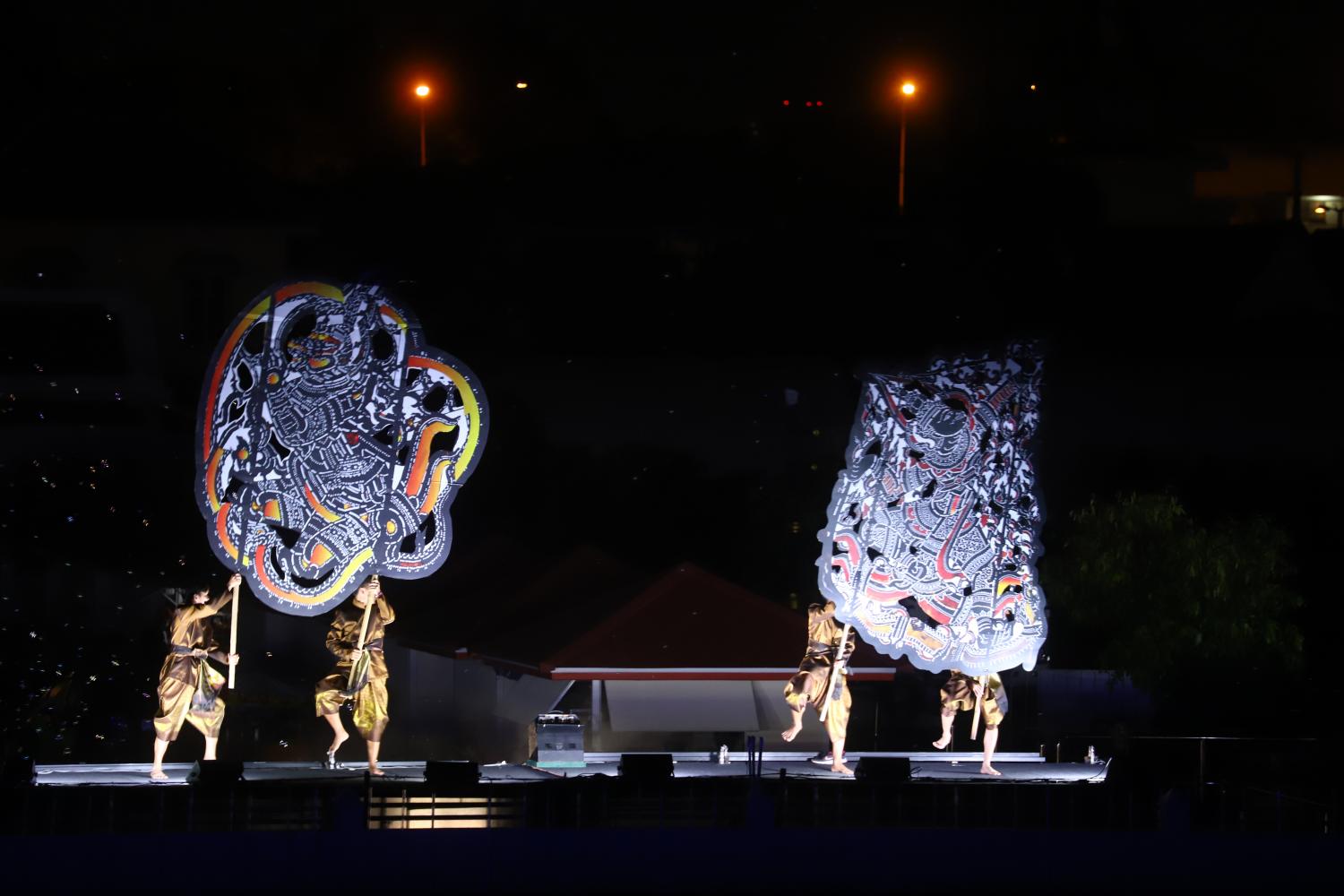 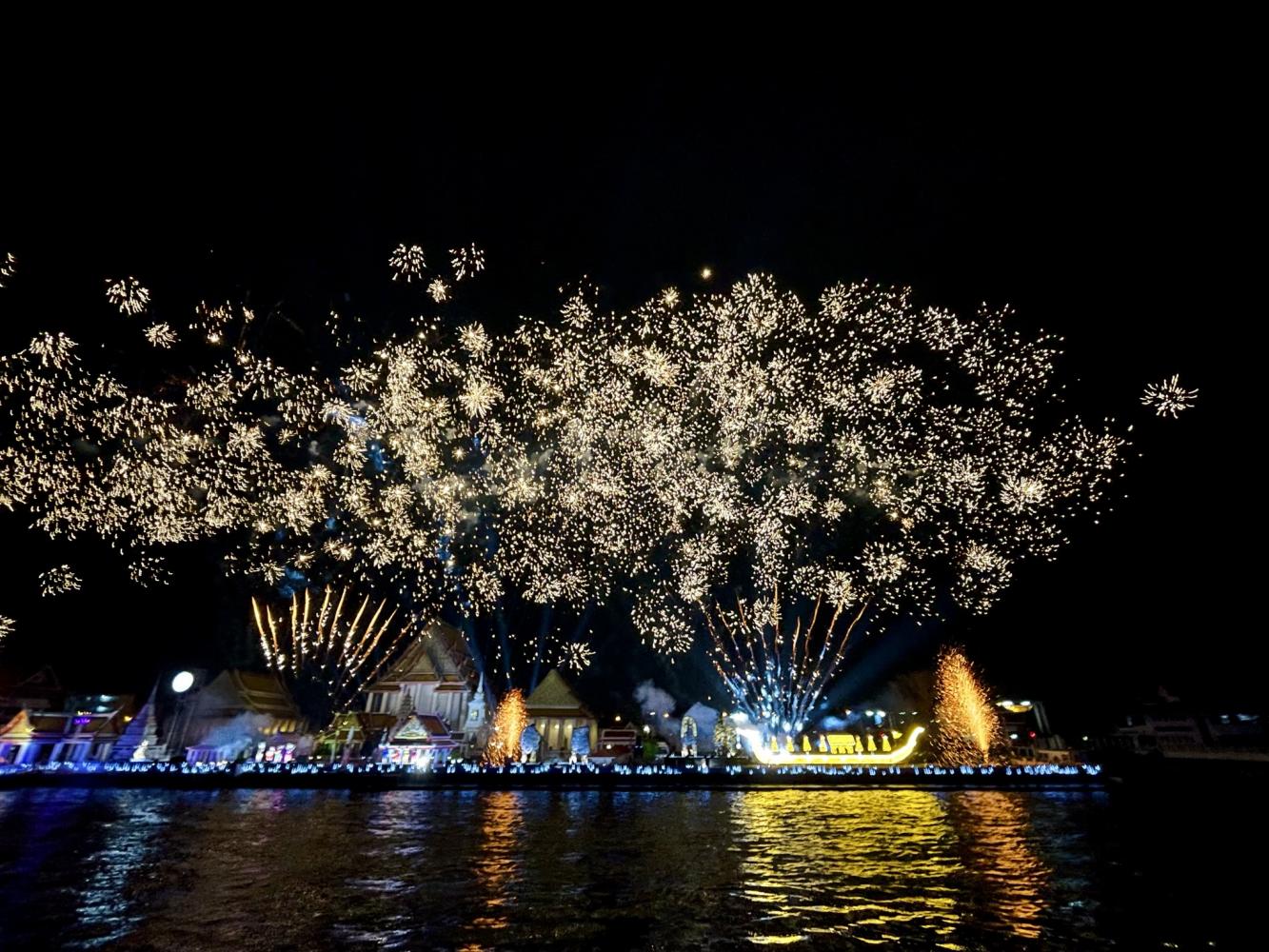 The second vihan is enshrined with a reclining Buddha statue in a coffin and you can witness his cremation in a projection-mapped forest. In the final vihan, Buddhist pilgrims can travel back in time to the period of King Rama II and accompany a group of monks as they ascended Samantakuta (also known as Adam's Peak or Sri Pada), which houses Lord Buddha's footprint standing on a lotus.

Visitors can reach Wat Chantharam Worawihan by following pink lights along a narrow lane. It was constructed in the Ayutthaya period and was refurbished in the reign of King Rama III. The gable of the ubosot is illuminated to emphasise a mural made of pastel-coloured Chinese ceramic ware showing an assortment of traditional offerings.

The final stop is Wat Ratchakhrue, which was erected in the late Ayutthaya period by the Burmese army and was restored in the reign of King Rama I. The colourful light decoration leads pilgrims to the stupa atop an imitation of Meru Mount, which houses Lord Buddha's footsteps and shadow.

TAT Bangkok joins the Chao Phraya Express Boat to offer special discounts on Riva Express Cruise to enjoy Vijit Chao Phraya on Nov 18, 19, 26 and 27. Tickets are 150 baht (from 250 baht) with a limit of 500 tickets. For more information, visit bit.ly/3A1UrsG.

Vijit Chao Phraya continues until Nov 27. Check out the schedule of light, projector mapping and cultural shows at thailandfestival.org or facebook.com/ThailandFestival.

The Hidden Temple exhibition is on view until Sunday from 4-9pm. Find out more details at cea.or.th. 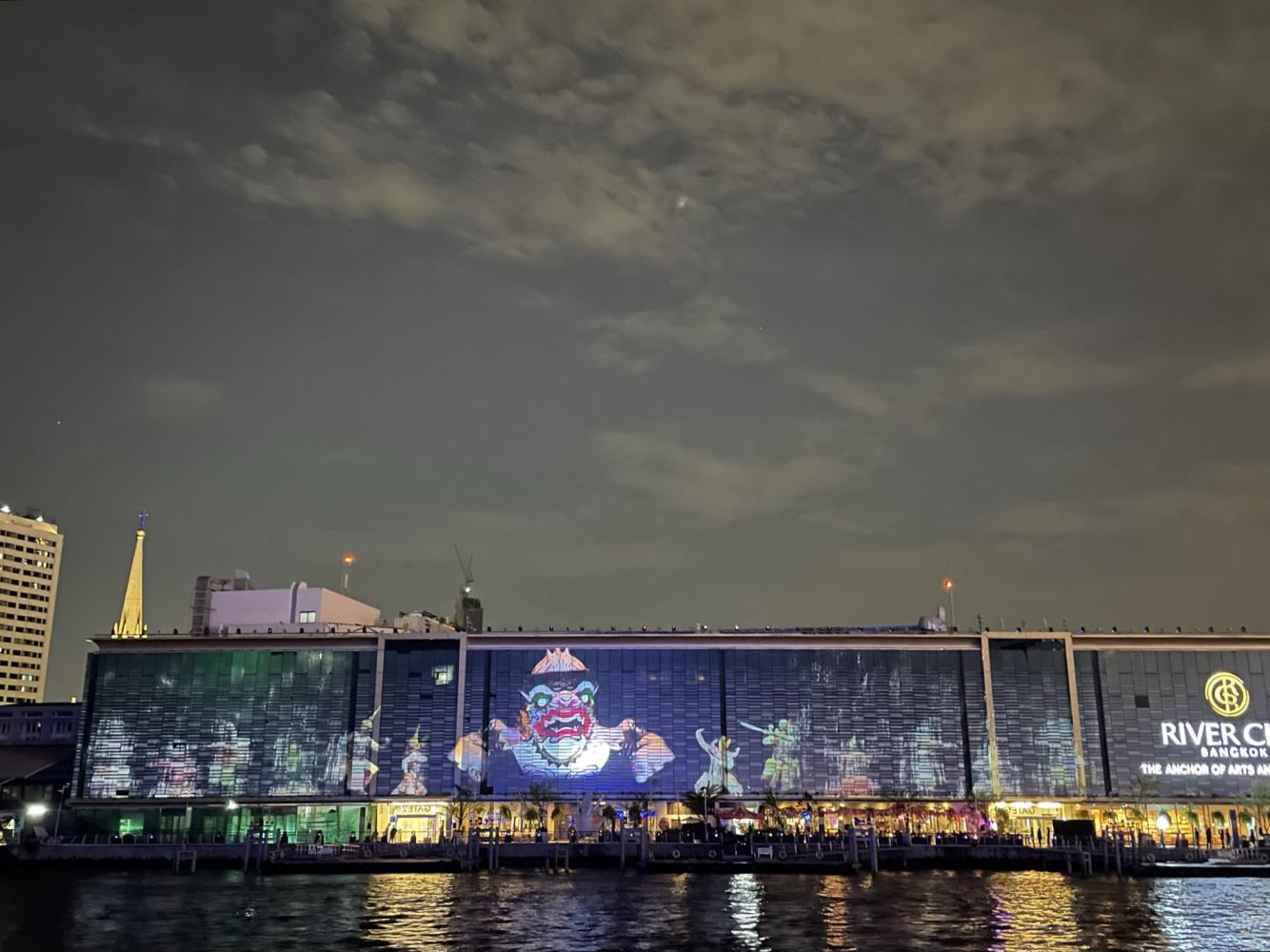 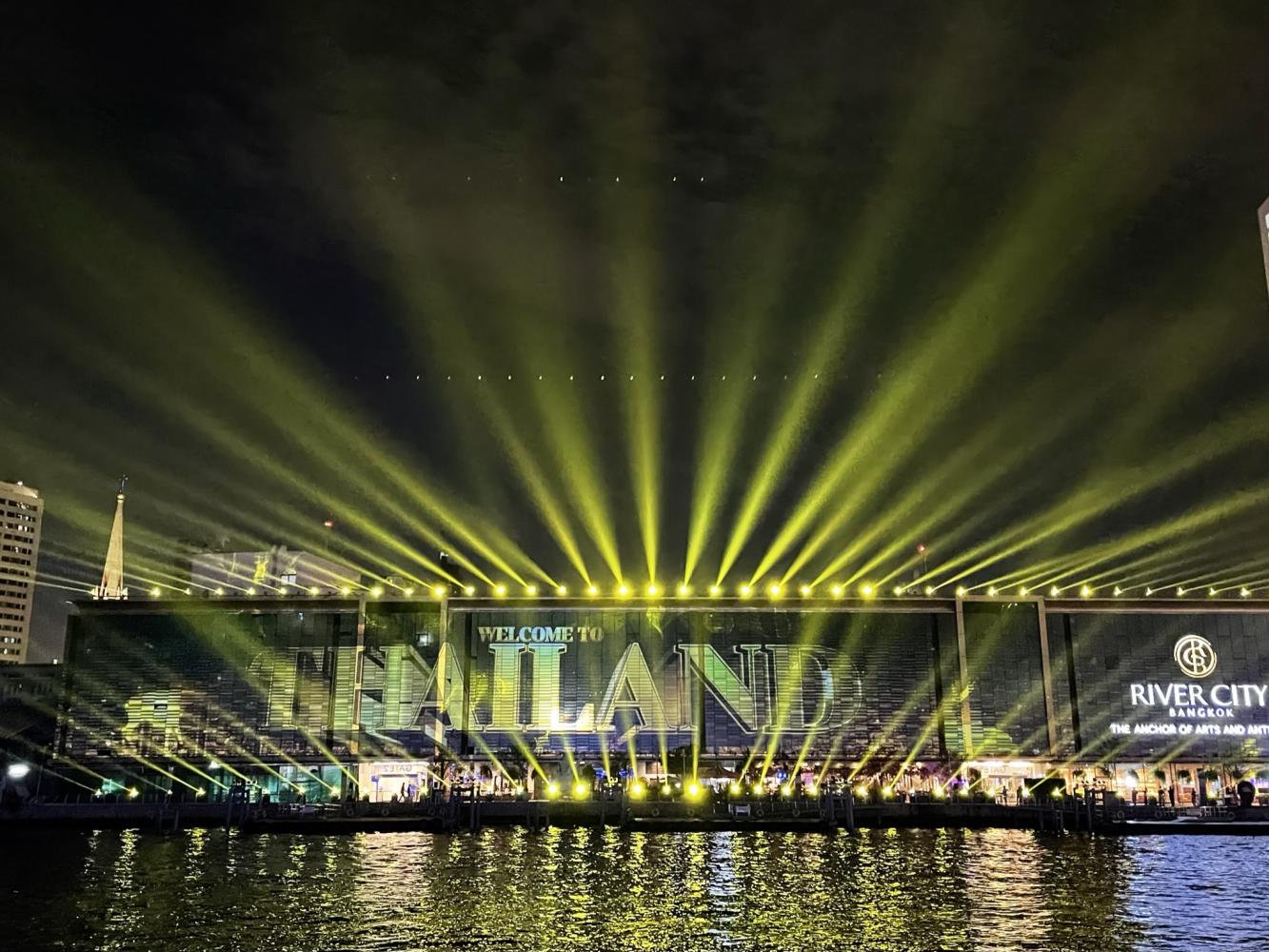 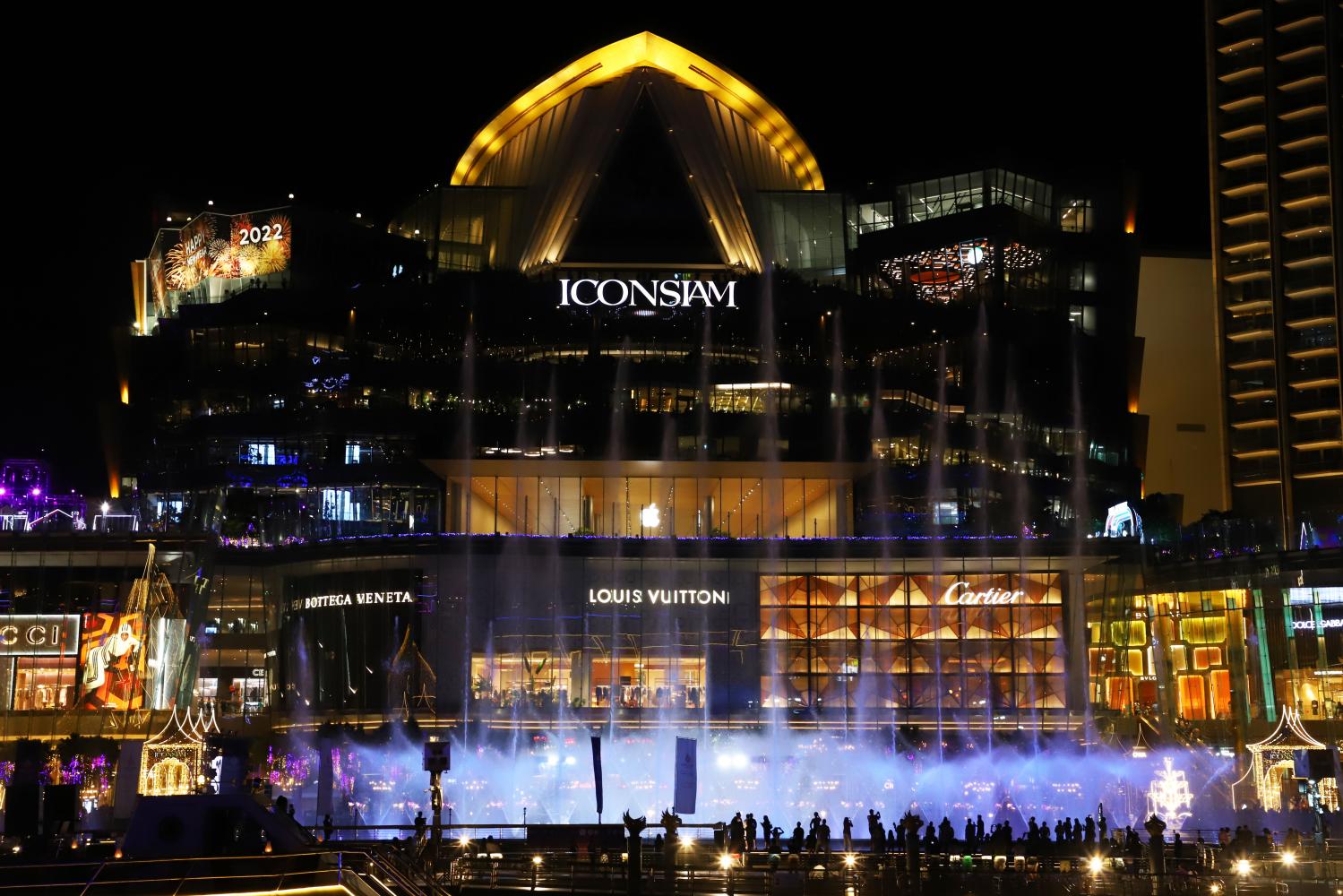 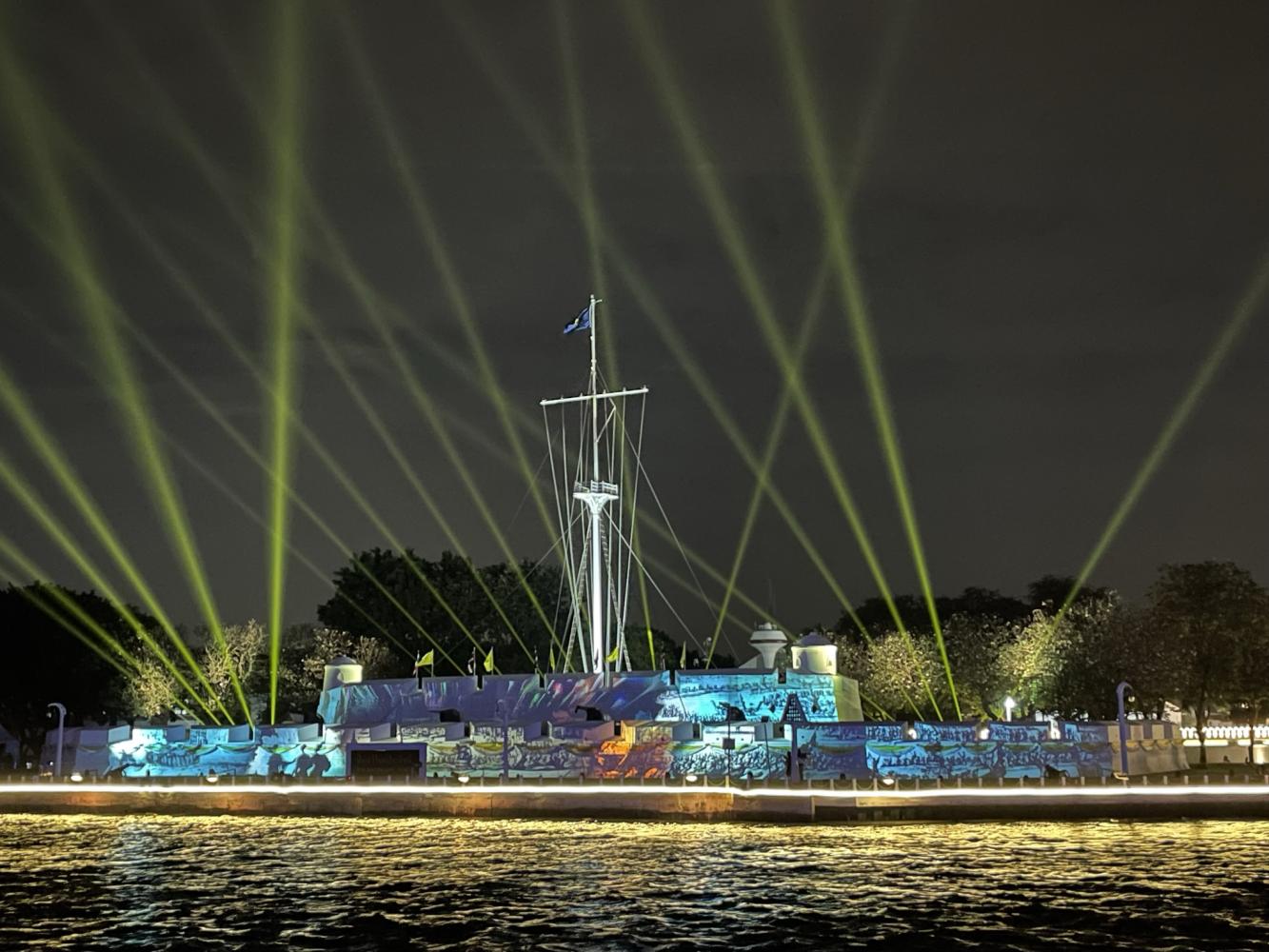 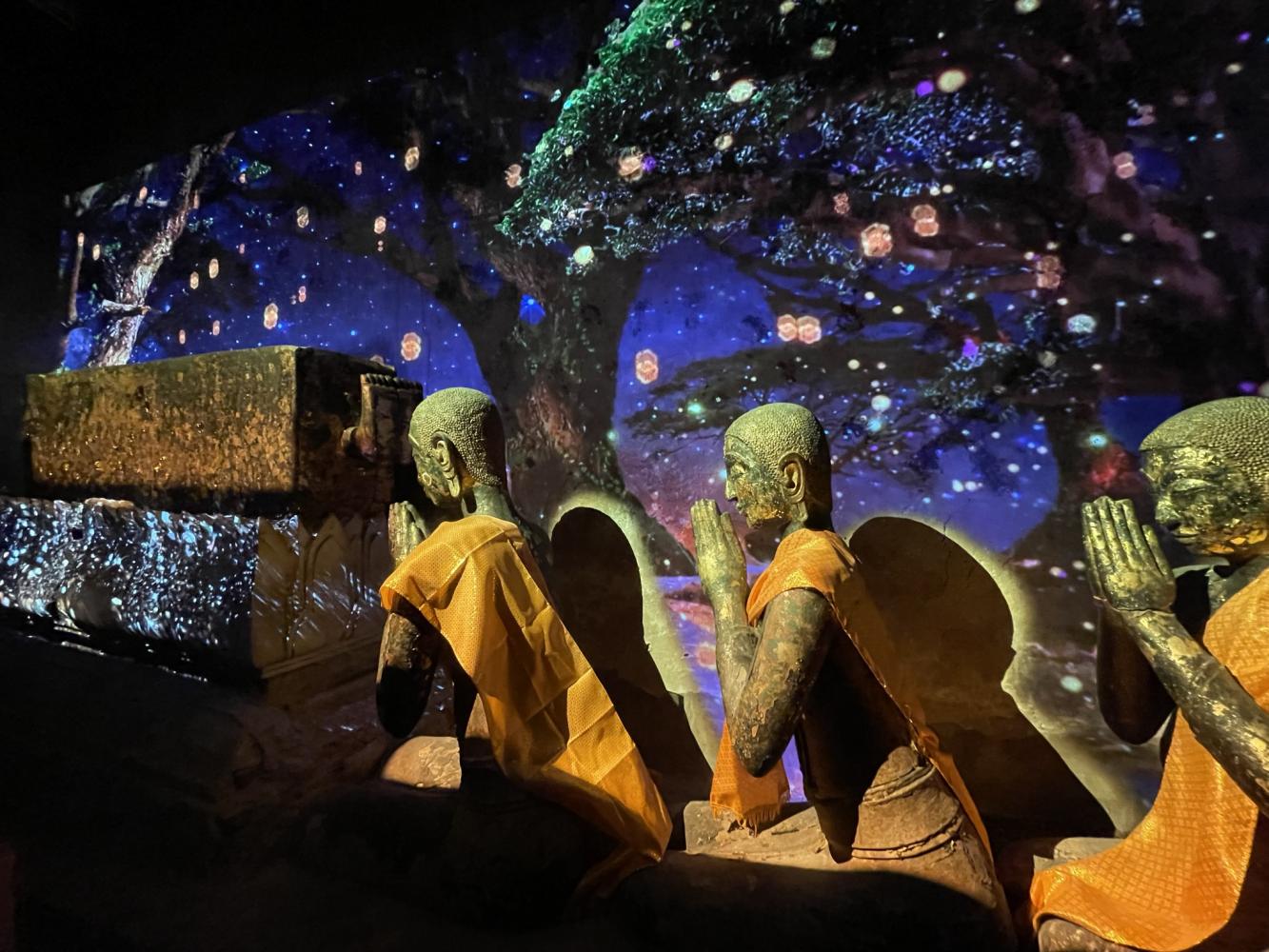 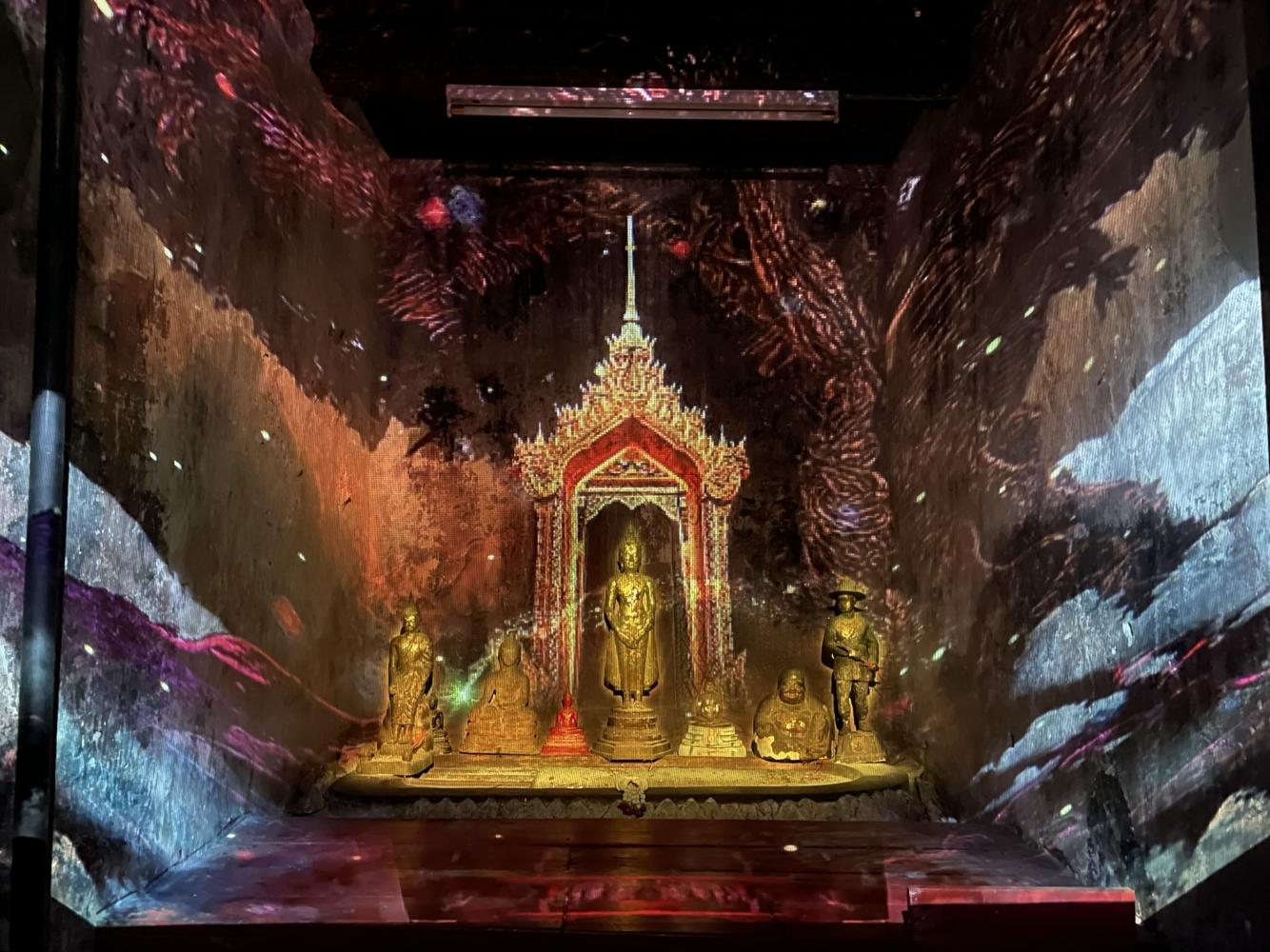 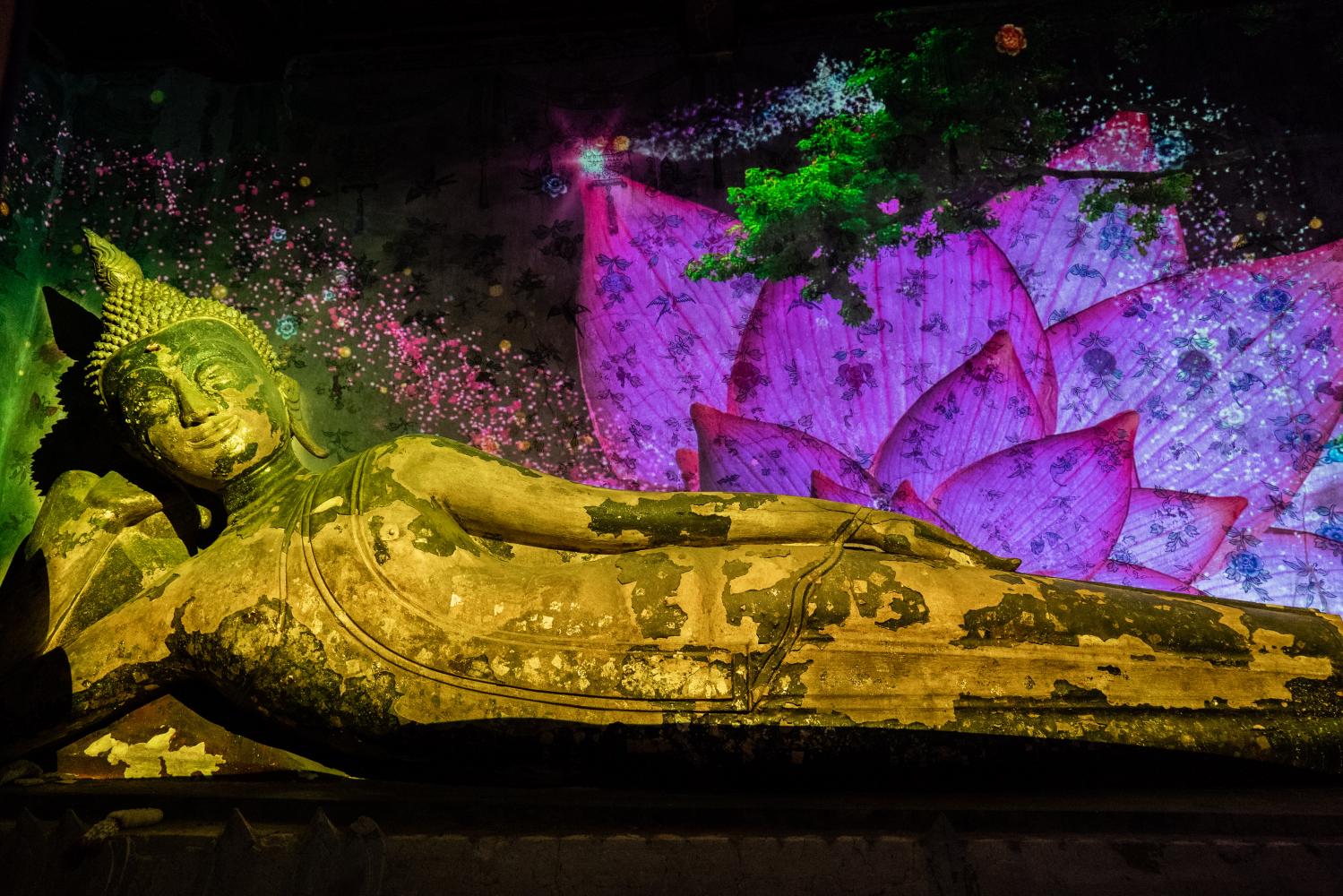 Devotees can make a pilgrimage to Wat Intharam Worawihan. 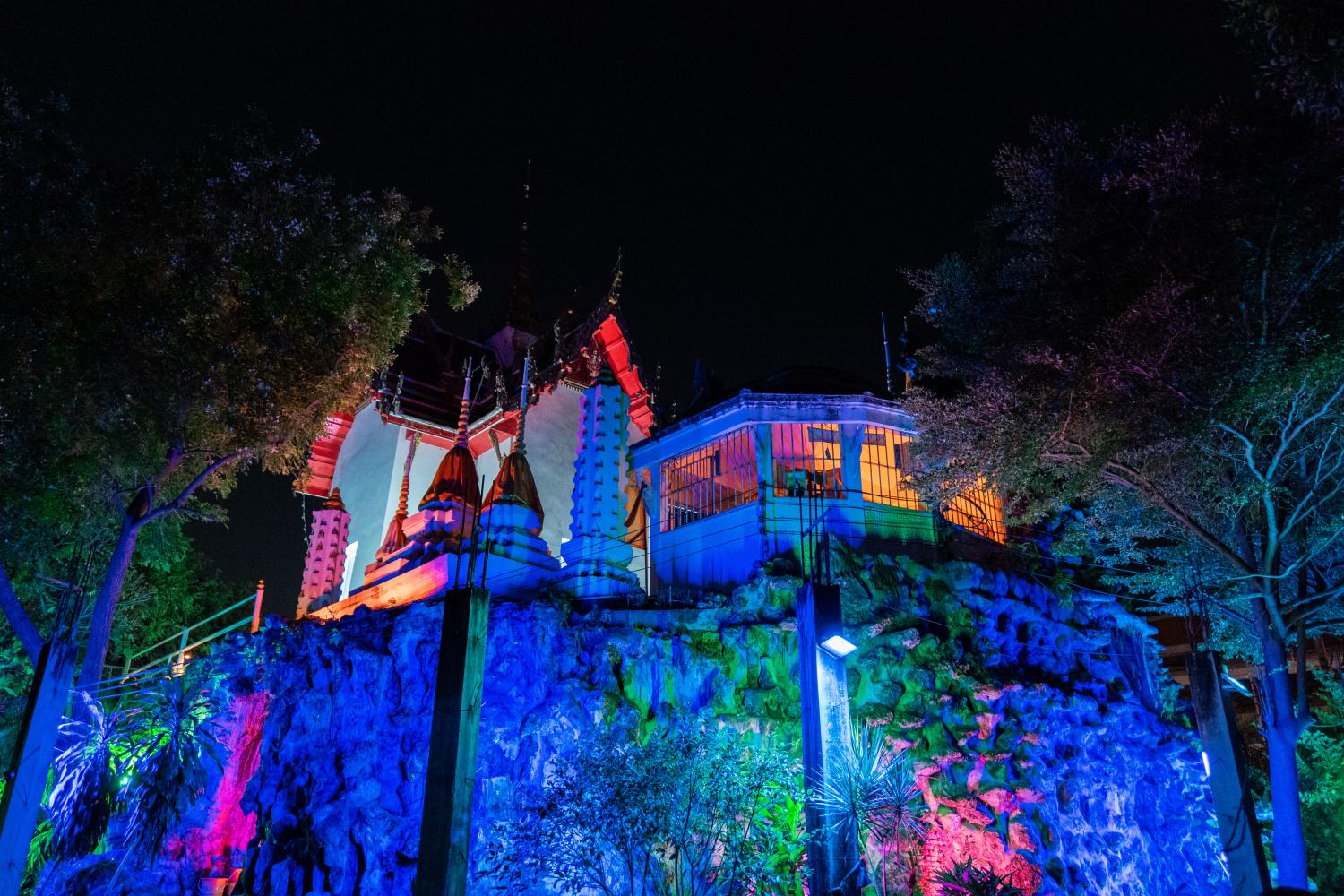 Pilgrims can climb a recreated Meru Mount to pay respects to Lord Buddha's footprint and shadow. 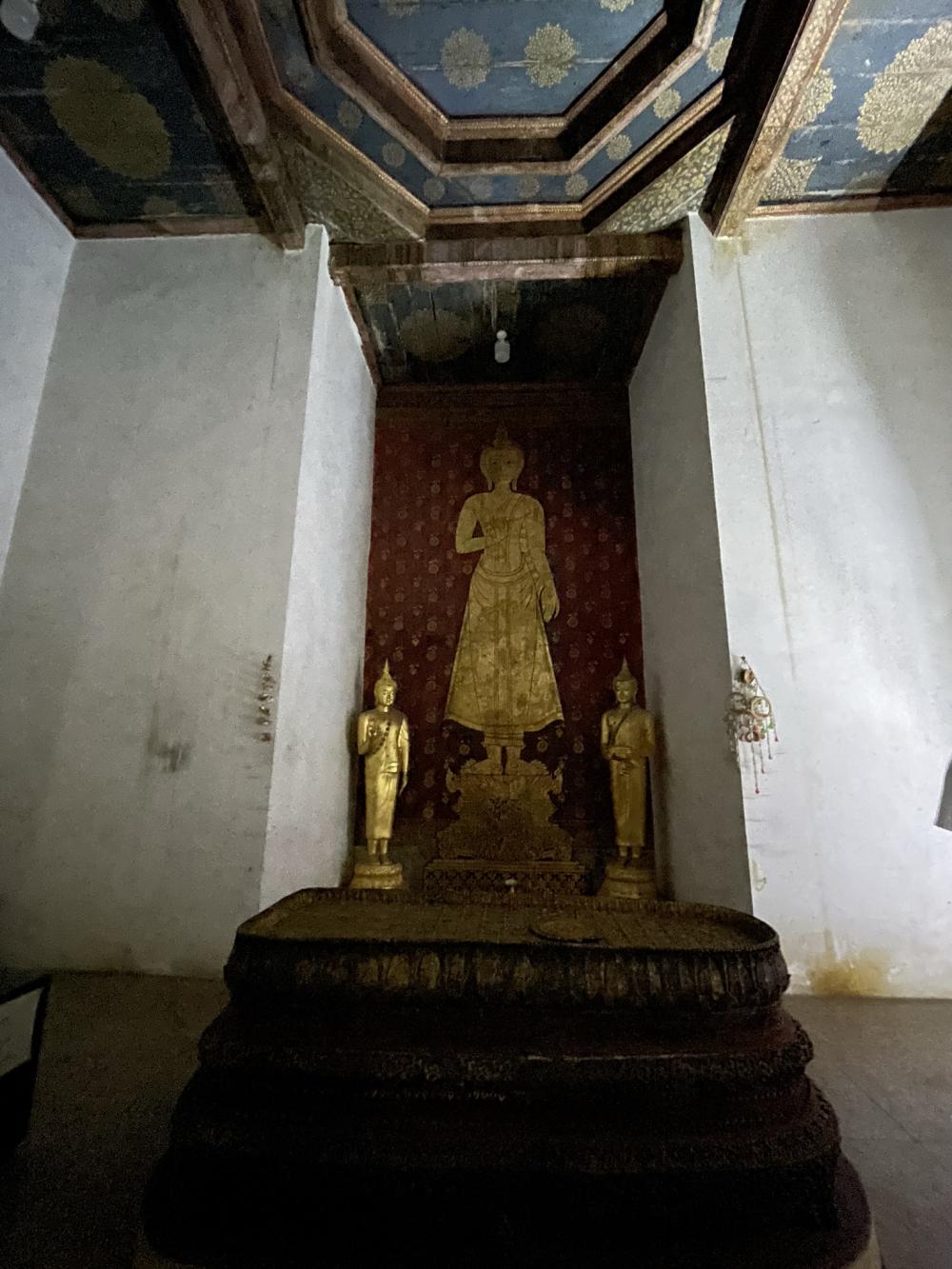 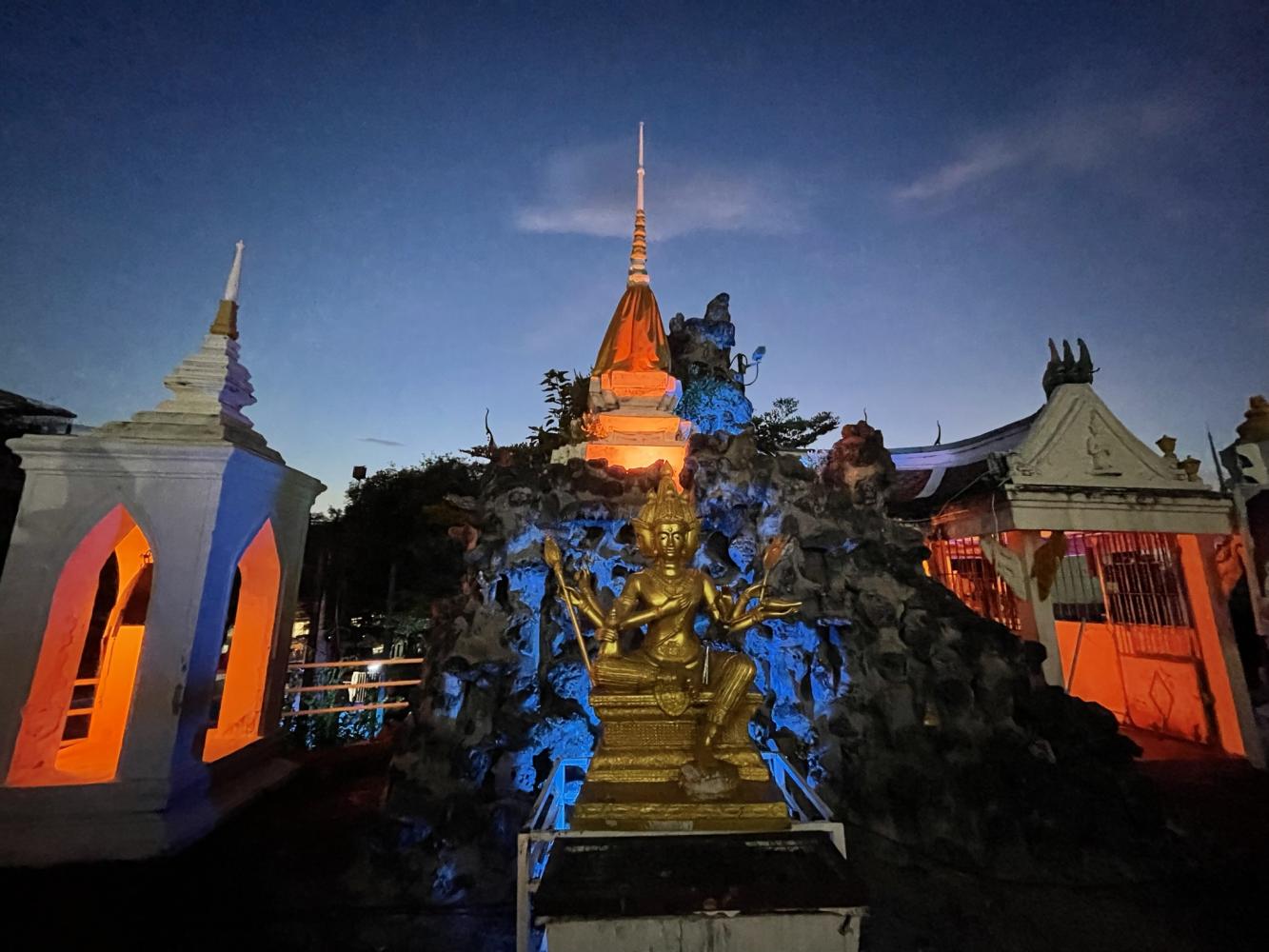 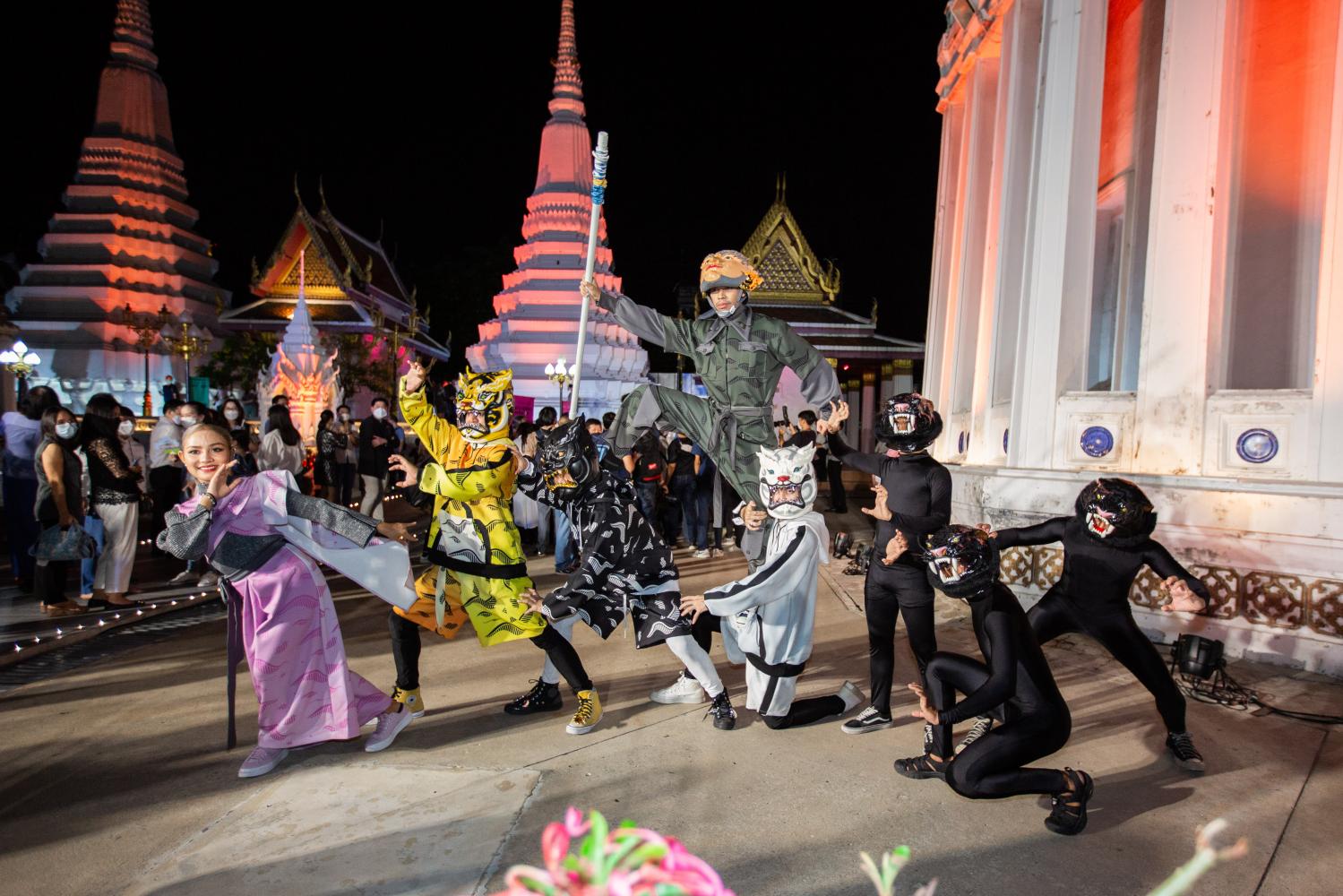 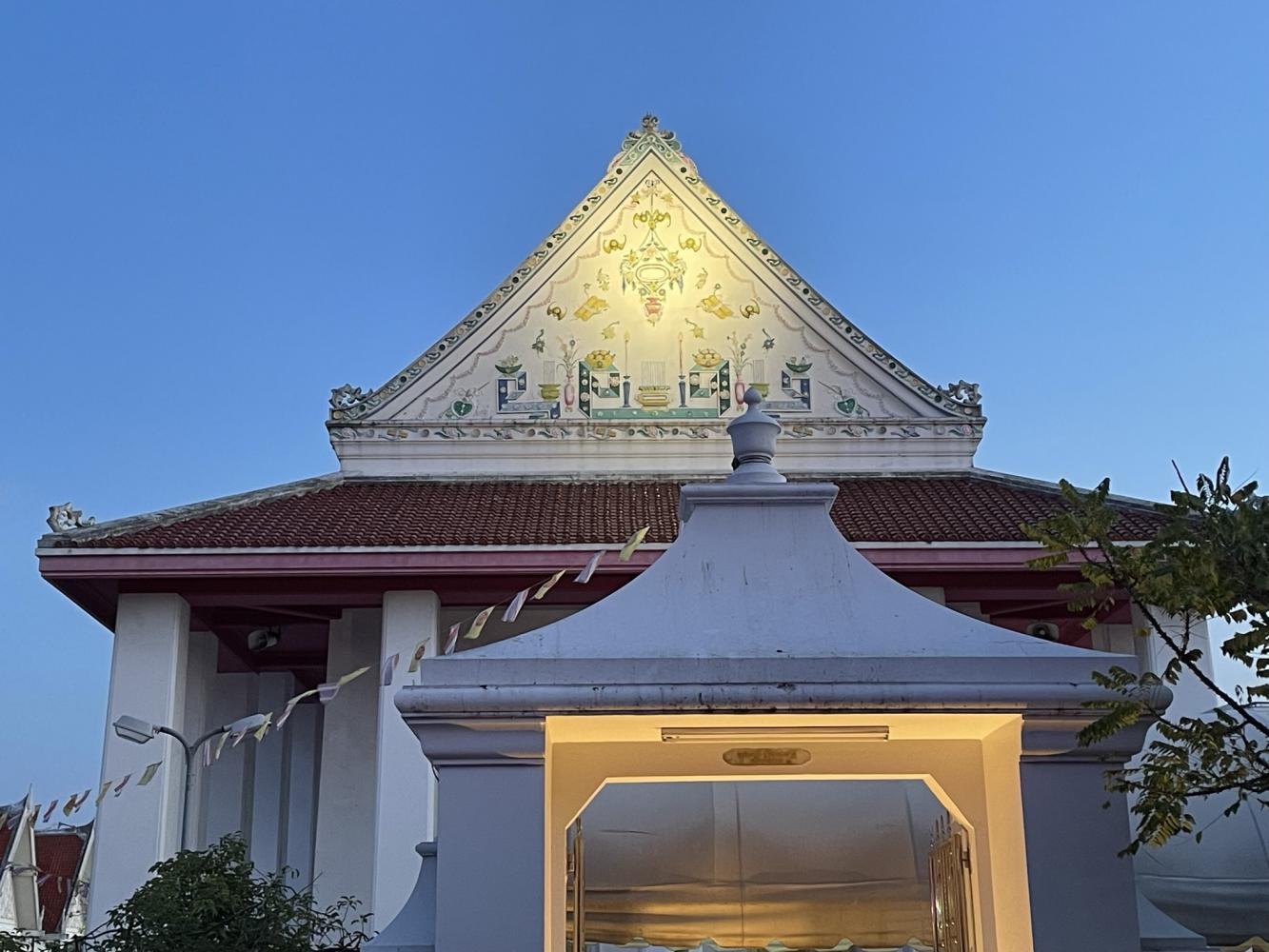