From past to present
Travel

In Samut Prakan, temples and museums provide a glimpse of Thailand's rich history and future ambitions

On a Saturday morning, I strolled through a maze of narrow lanes in quest of a simple brunch at Bang Namphueng Floating Market, located in the Thai-Mon community of Bang Krachao. This was my second visit in two years and this time it was merely a stopover on my way to Samut Prakan. 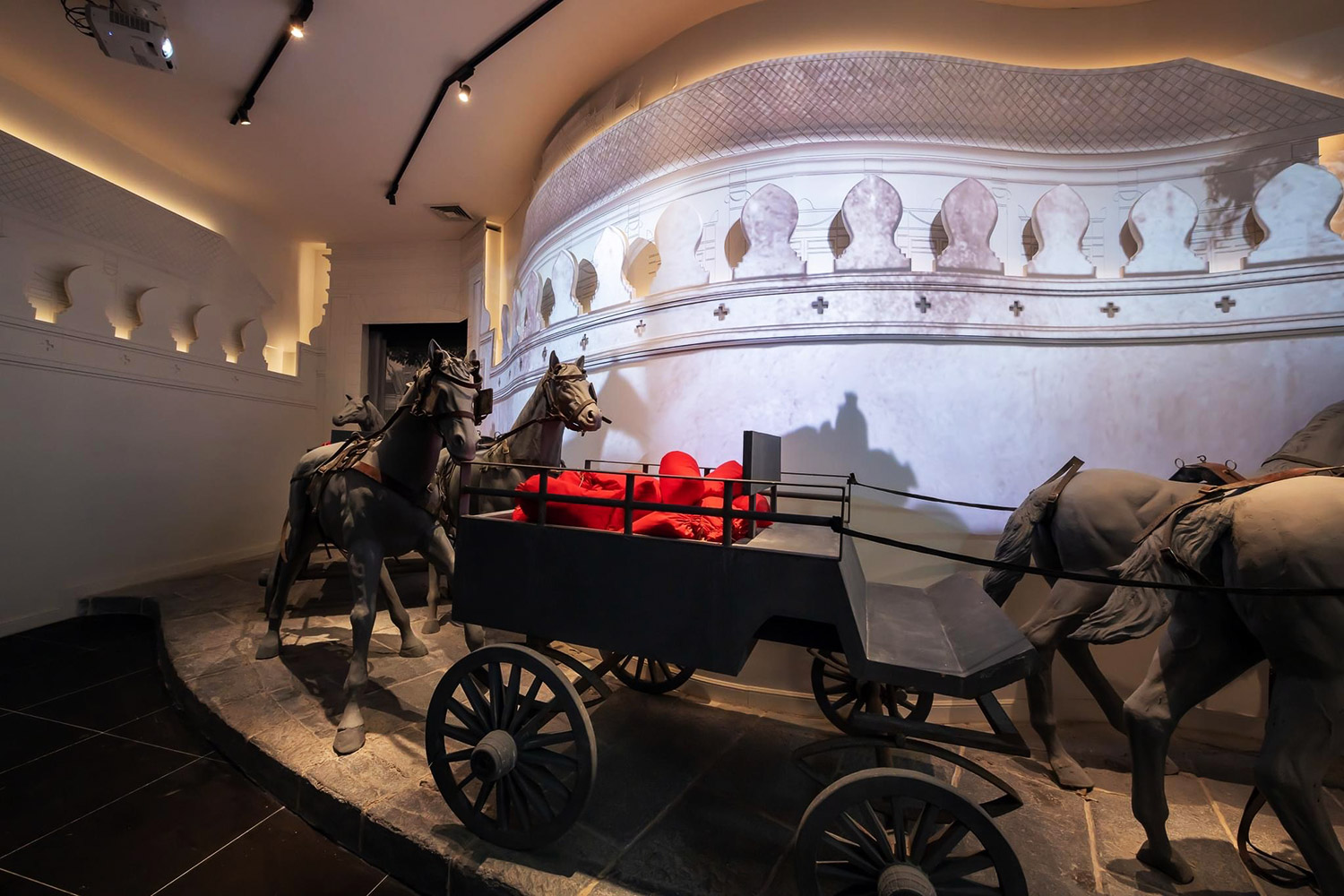 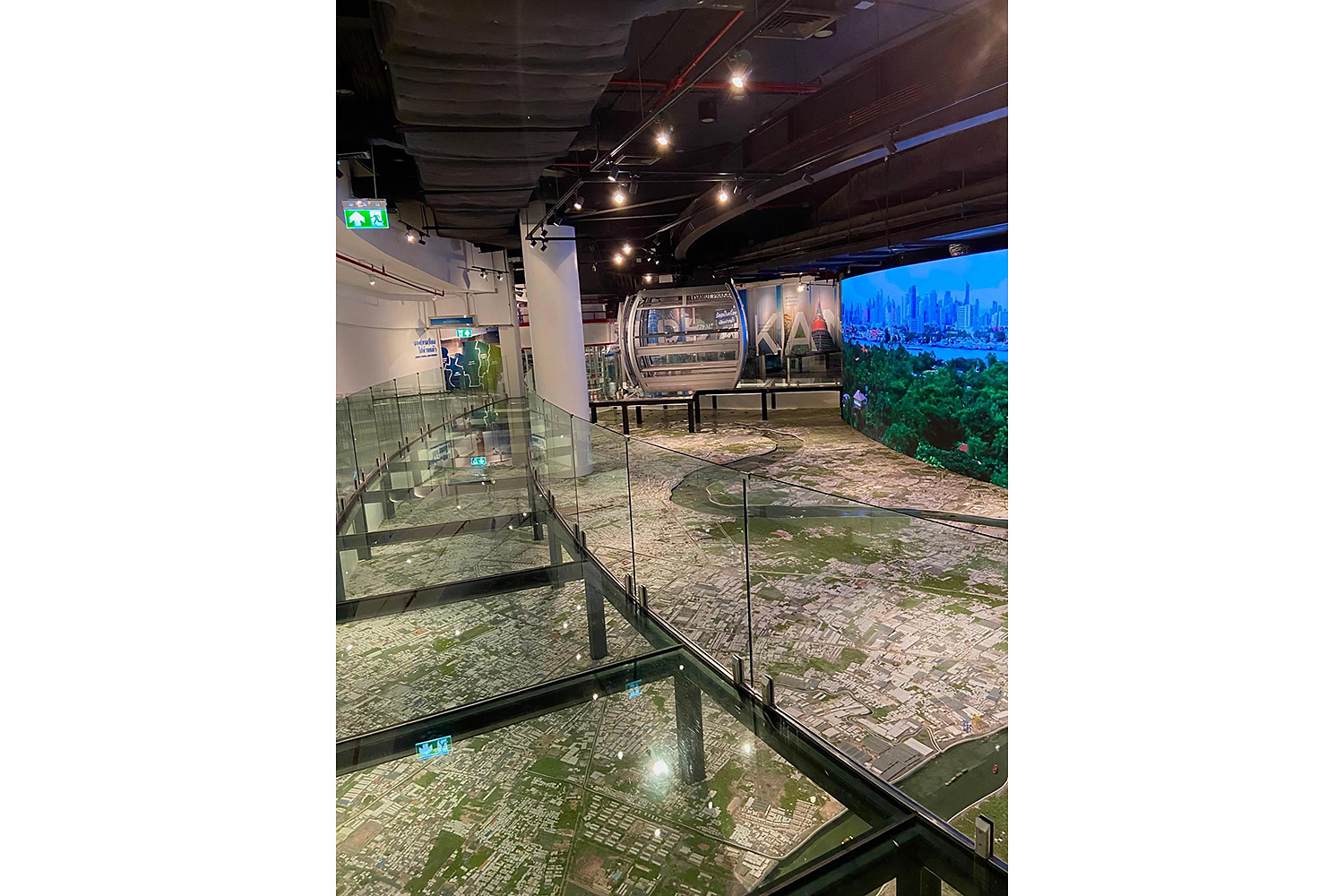 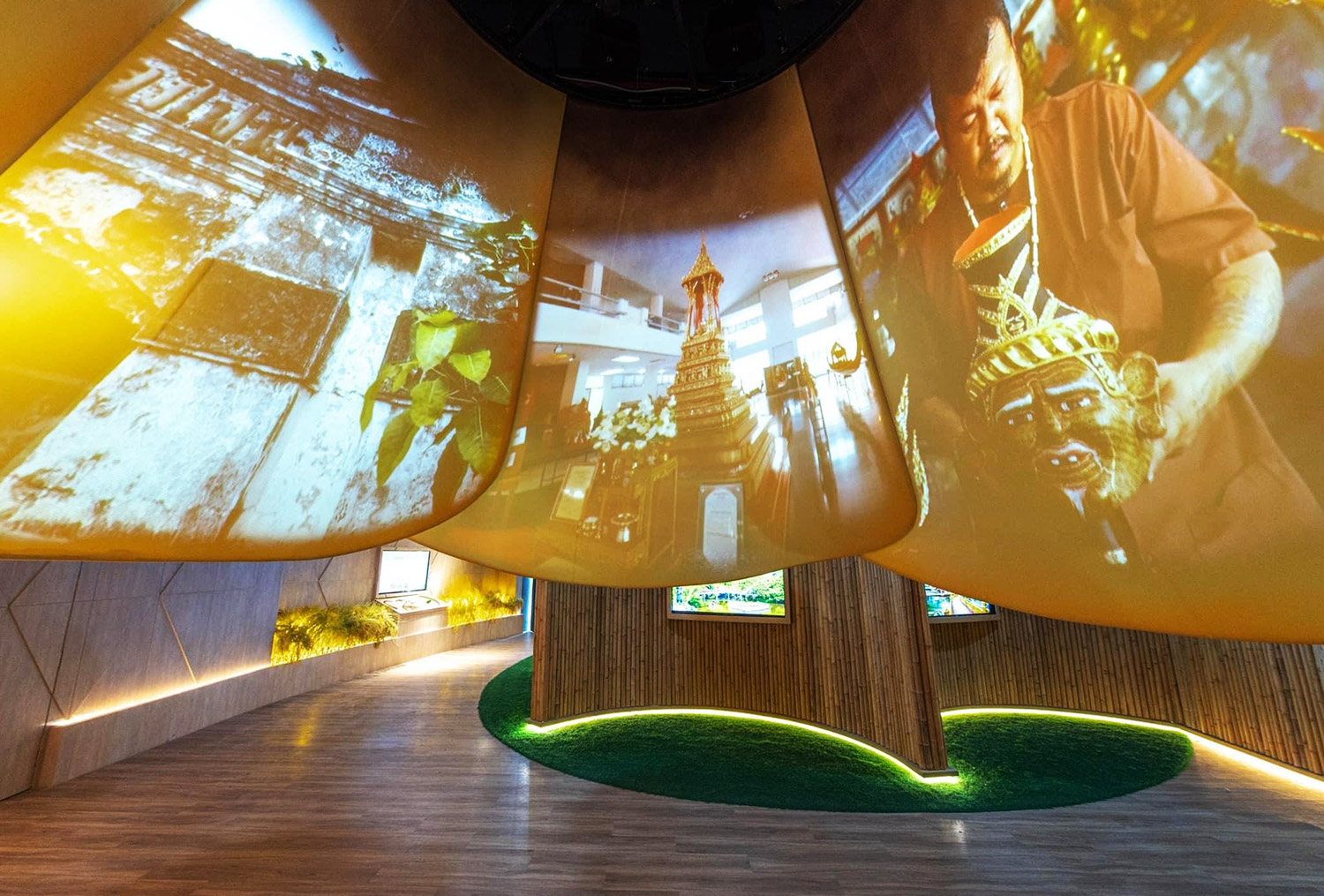 I couldn't help but notice how quiet and deserted it was. Despite the absence of crowds, hundreds of local vendors stood ready to offer a wide range of enticing street food, homemade delicacies, fresh agricultural produce from farms, handicraft products and souvenirs.

After refuelling, my travel companions and I began our sightseeing tour by heading to Wat Bang Ping, located on Srinagarindra Road, Muang district. To capture the attention of the young generation and local Buddhists, the temple teamed up with a talented artist from Ang Thong to create astonishing Buddhist artwork.

The ubosot has been undergoing a massive facelift for four years and is now lit up with 3D illuminated murals recounting the story of Lord Buddha's life. Walking through the entrance feels like we're in the core of Buddhist cosmos, with a collection of small Buddha statues set on the walls in accordance with the belief of 108 Buddhas.

When the lights are dimmed, the ceiling transports visitors to Mount Meru, which is encircled by Khao Sattaboriphan (the Seven Mountains) and Himmapan Forest, with Phra Samut Chedi and Bhumibol Bridges serving as a backdrop to represent a co-existence of old and new.

Behind a Buddha statue, visitors can see the Buddha meditating to achieve enlightenment and the Goddess of the Earth squeezing water from her bun to expel the troop of devils and monsters. On the other side, visitors can learn about His Majesty King Bhumibol Adulyadej the Great's royal projects such as the Thailand Royal Rainmaking Project, the Bhumibol Dam, the Chang Hua Man Royal Initiative and Agricultural Project and the Doi Inthanon Royal Project. 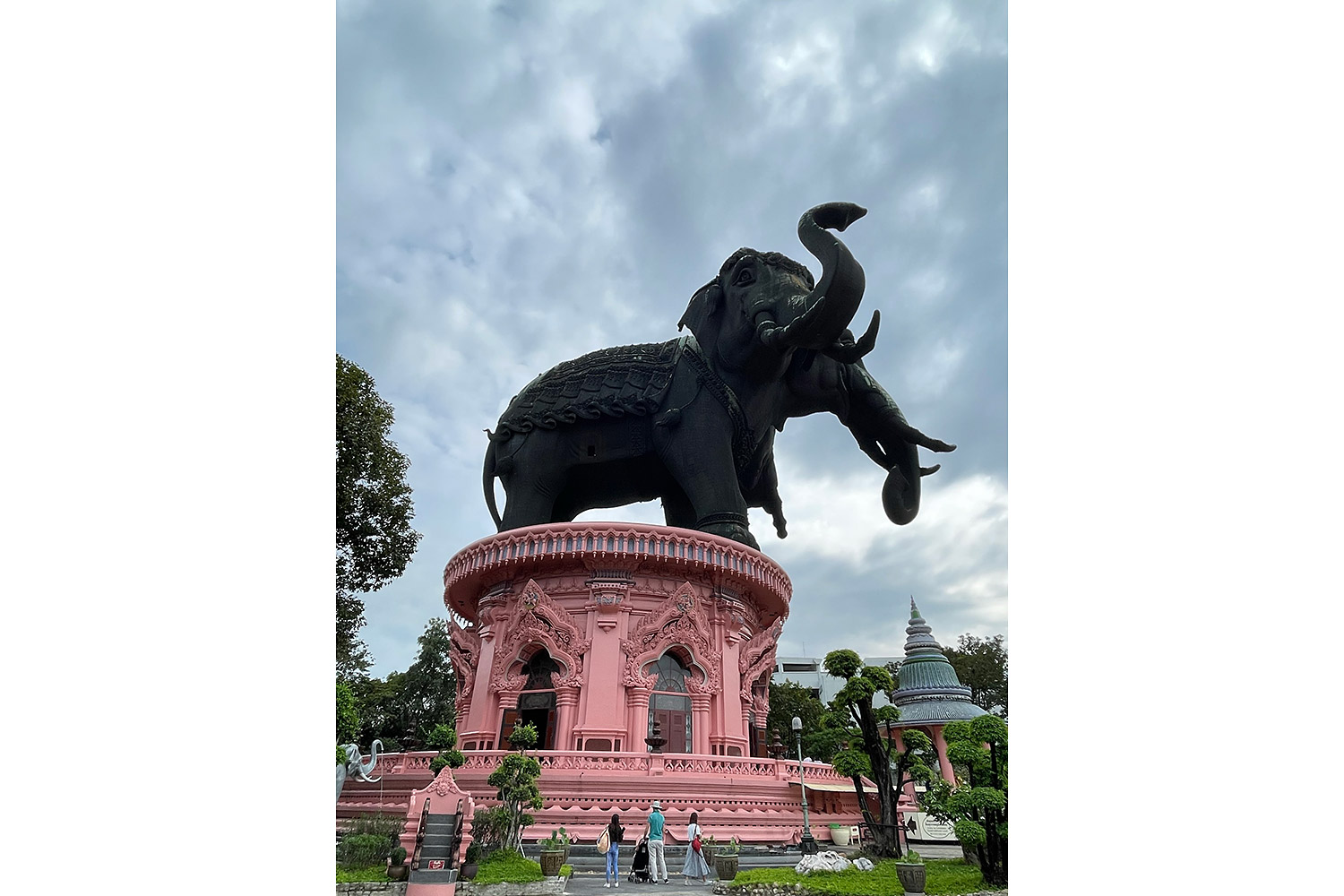 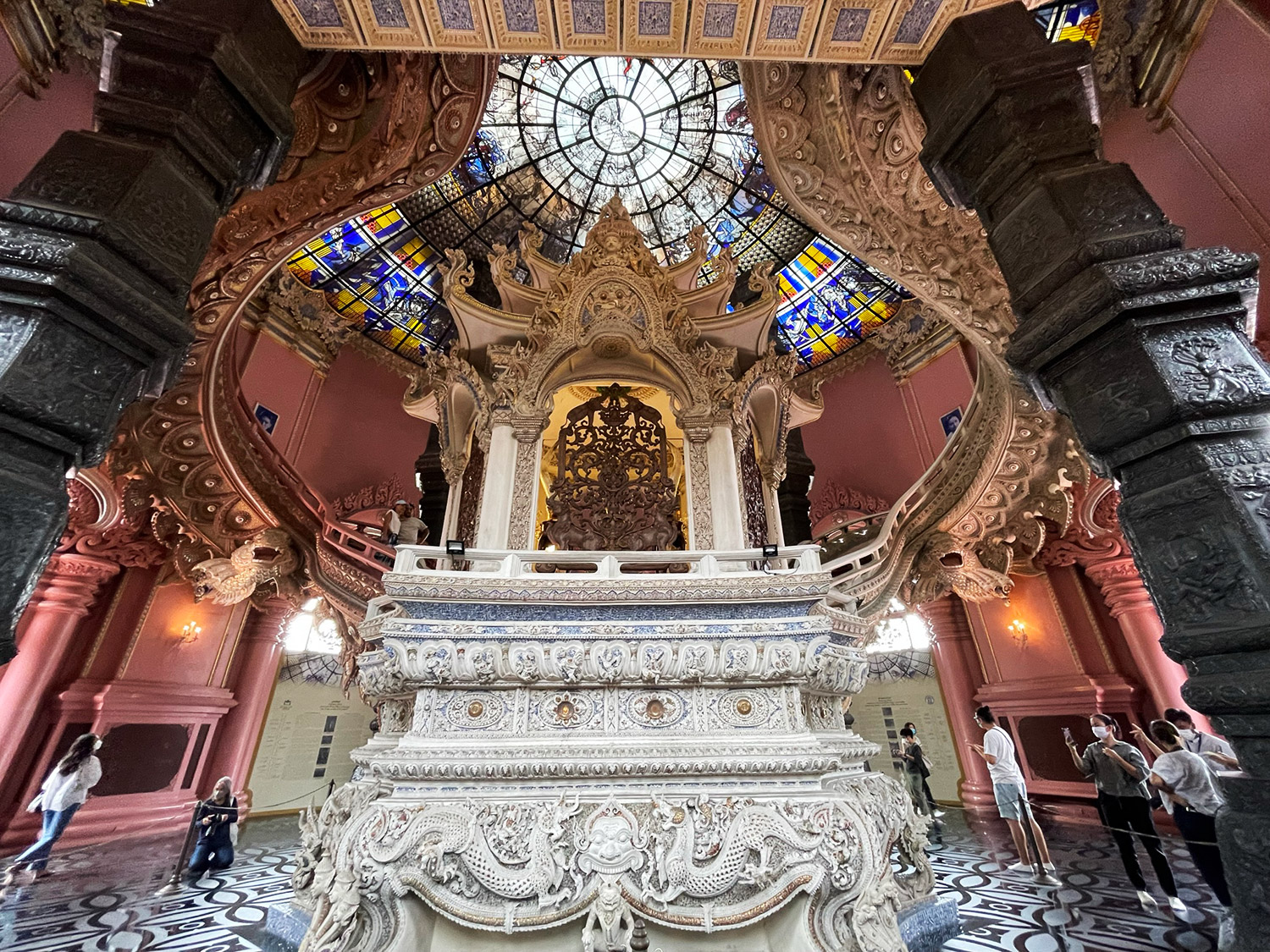 An adjacent three-floor pavilion rooftop houses a white towering 32m-tall statue of Phra Phutthalokchet Wiset Kittipan Mahabuchit in a posture of disclosing the three worlds. The 2nd floor looks like an art gallery with Lord Buddha's relics and beautiful murals illustrating a foundation pillar laying ceremony and four noble truths according to Buddhist doctrines. At the same time, another pavilion's walls are adorned with striking murals that portray rural life and the current circumstances that have changed as a result of the Covid-19 outbreak.

Just a 4km drive from the temple, we continued higher, reaching the 179m-tall Samut Prakan Learning Park and City Observation Tower. With a budget of 593 million baht, this collaboration of Samut Prakan City Municipality and the Provincial Administrative Organisation transformed a former provincial prison into a 13,585m² educational hub that houses a museum, a kids' learning centre, a public library and an observation deck under one roof.

The museum spans three floors with the immersive interactive exhibition "From Tales To Town" paying tribute to Samut Prakan's illustrious past as a booming marine trading port. There are six zones, such as the "Pak Nam: The Stream Of Memories" room.

Visitors can board a time machine simulator and travel back to when Samut Prakan (commonly known as Pak Nam) served as the frontline for marine commerce and the defence of the Kingdom's borders during the Ayutthaya to Rattanakosin periods. For centuries, this town was a significant crossroads for sea merchants from China, Persia and Europe to trade their goods and cultures. 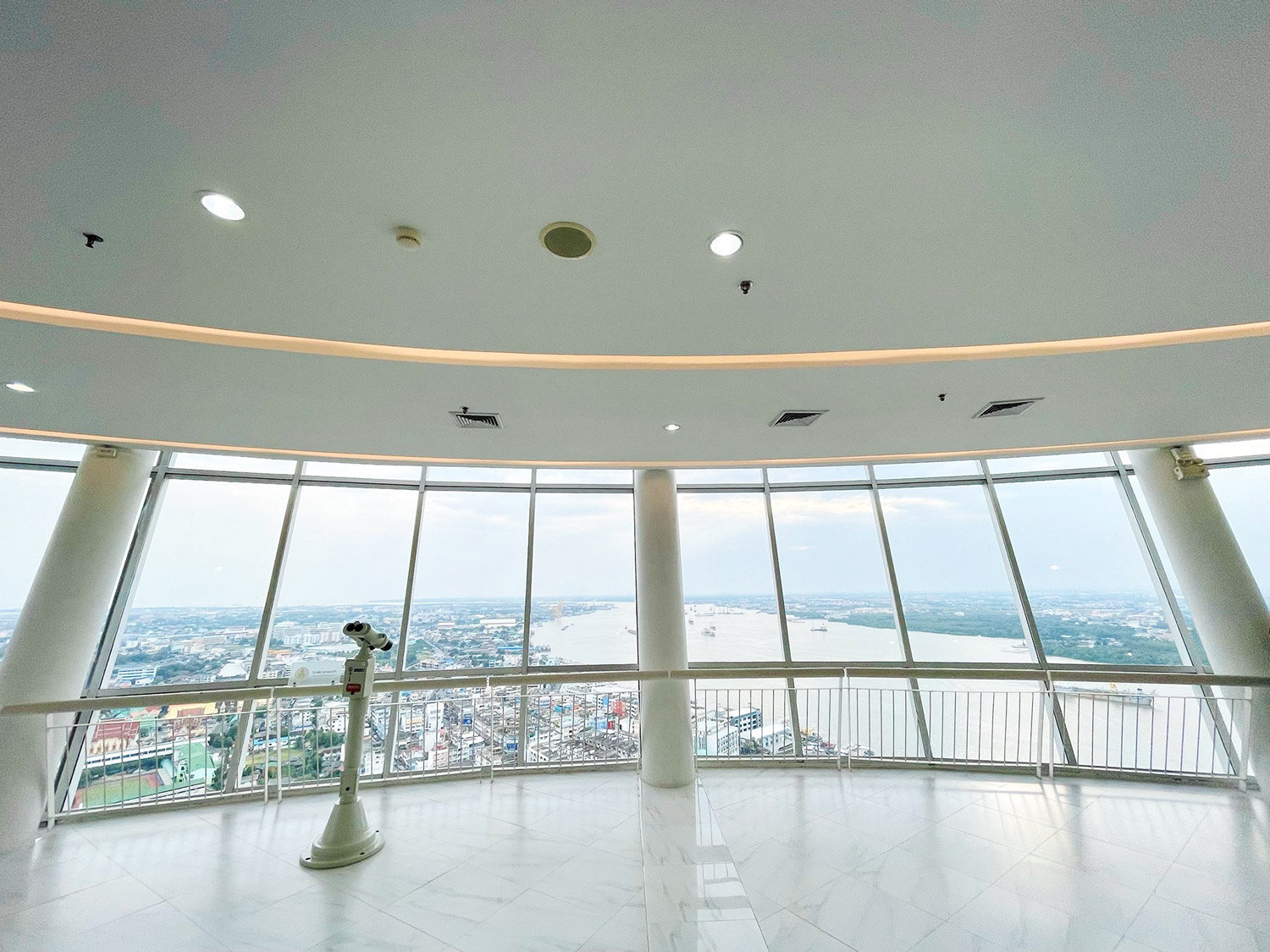 The "Pioneering The Old Front Pier" zone recounts the history of the historical Dutch trading port of New Amsterdam using projection mapping and cutting-edge light and sound mechanic diorama techniques. During the Ayutthaya era, it arose on the banks of the Bang Pla Kot canal and functioned as a middleman in international trade.

The "Raising The Fortress" zone allows visitors to explore the fortified city of Nakhon Khuen Khan and Samut Prakan in the early Rattanakosin era. It not only played a key role in protecting Siam against adversaries, but it also served as a cultural melting pot for Thai, Mon and Chinese people.

The "Advancing Defensive Turret" zone has been converted into a mini theatre, where visitors can immerse themselves in the 1893 Franco-Siamese War, which ended when Siam agreed to cede occupied land in Laos to France in exchange for peace. As a result of this fight, Siam advanced into modernisation and formed Thailand's modern navy.

The "City Of Connected Economy" zone brings visitors back to the present where Samut Prakan is growing into a crucial logistics hub in Asean and has a thriving agricultural industry to power Thailand's economy. At the Future Logistics Lab, visitors can learn about product transportation and distribution through fun interactive games. 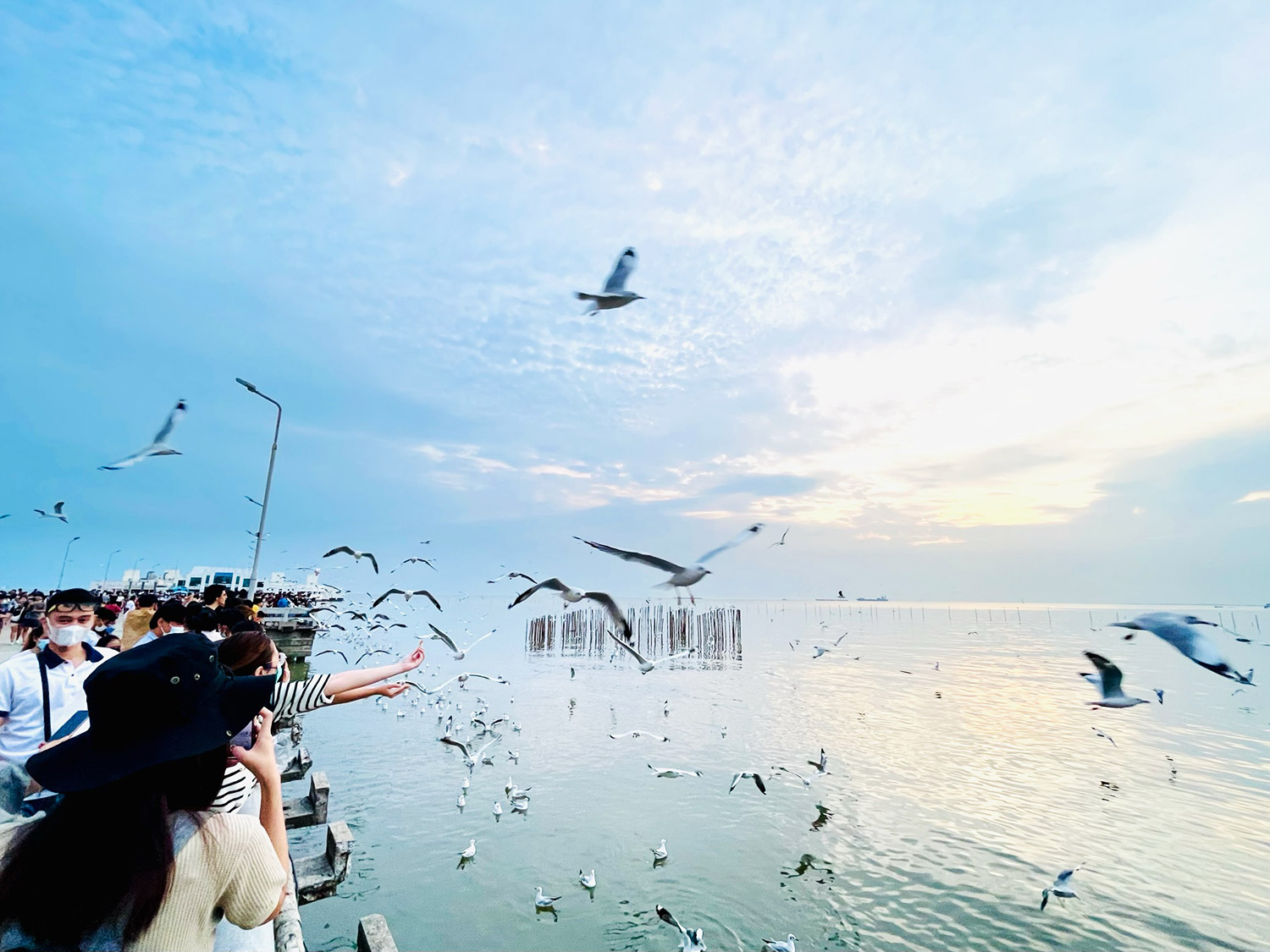 Between October and April, the Bang Pu Recreation Center serves as a location for bird watching. 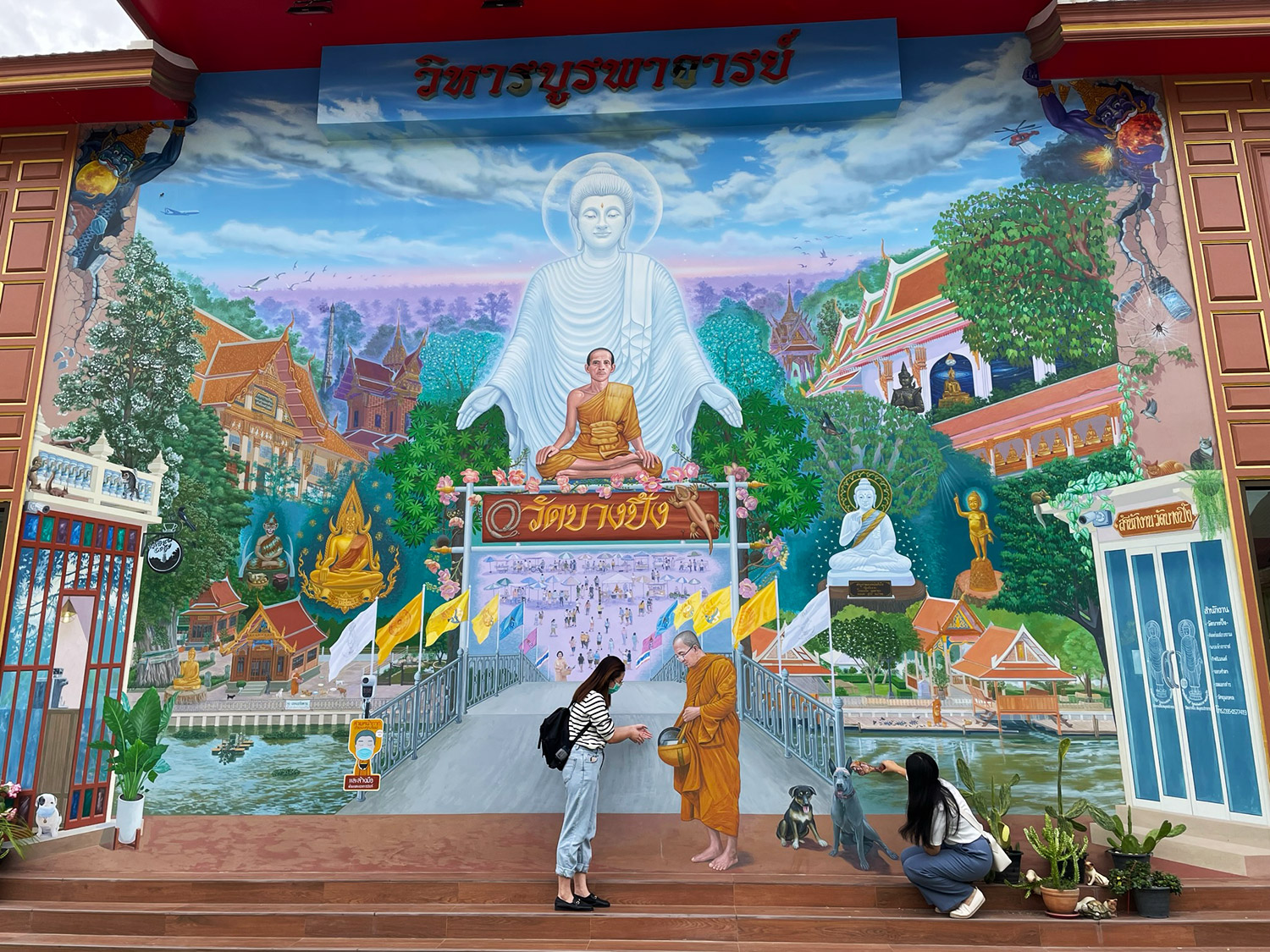 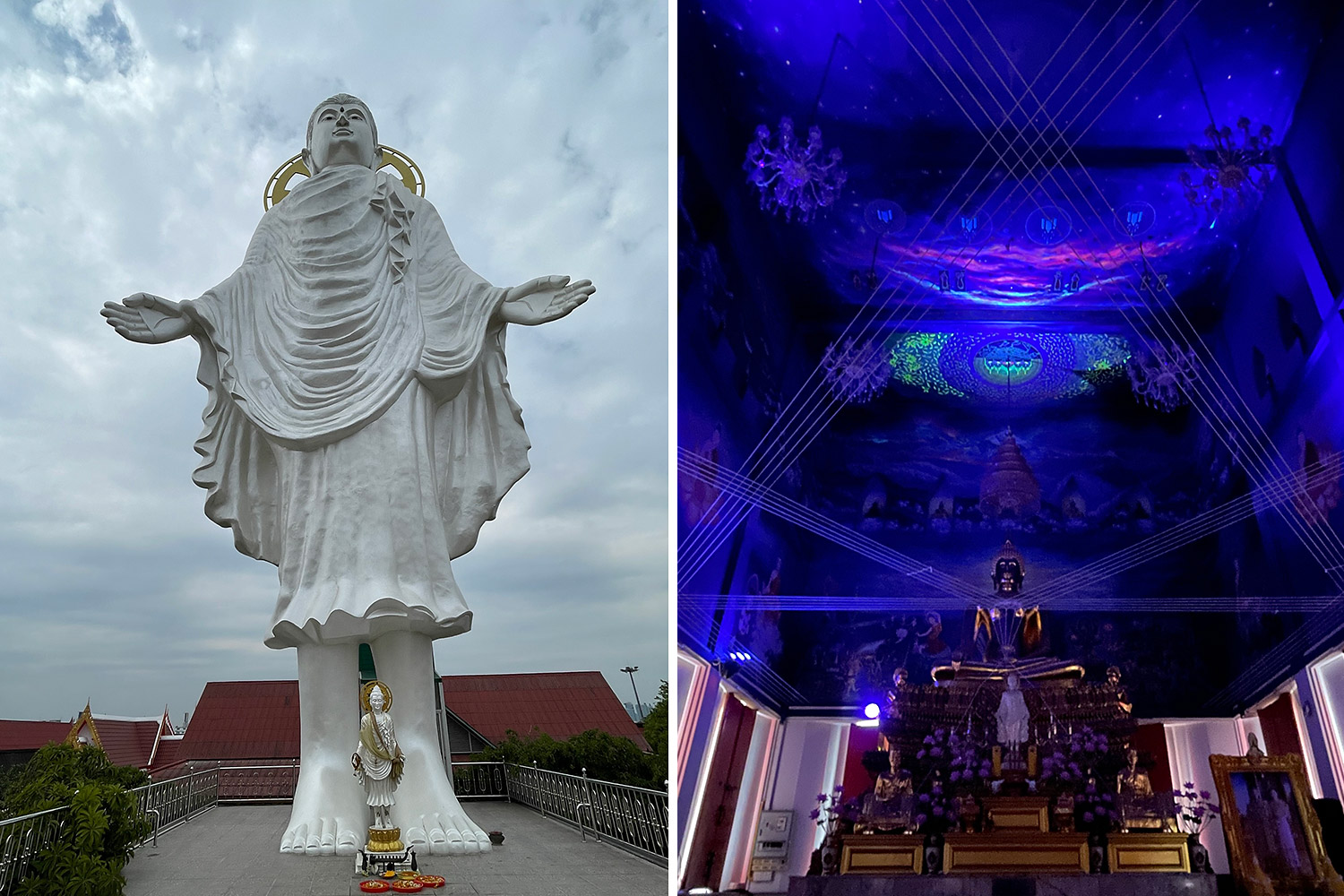 The "Looking Further, Going Forward" zone provides a glimpse into Samut Prakan's future by outlining the city plan and development initiatives to strengthen the logistic system and transform it into a gateway connecting Thailand with other regions.

The "Travel Matters" exhibition on the 23rd floor is the next stop, where you can learn about how His Majesty King Bhumibol Adulyadej established several royal projects such as the Luk Phra Dabos Project and the Royal Vocational Training Center to improve the quality of people's lives in Samut Prakan.

Visitors can continue inside to see wax figures of notable Buddhist monks such as Luang Phu Pueak from Wat King Kaew, Pho Paan Tisaro from Wat Mongkol Kothwas, and Luang Pho Chan from Wat Bang Bo. Samut Prakan is also home to 140 Buddhist temples that have become tourist attractions. The observation deck occupies the 25th floor, from where tourists can take in stunning panoramic views of the mouth of the Chao Phraya River and Samut Prakan's landmarks like Phra Chulachomklao Fort, Bhumibol Bridges and Phra Samut Chedi.

Not far from the observation tower, the towering sculpture of a three-headed elephant rises on a shocking-pink building at the Erawan Museum to highlight Thailand's first-class craftsmanship. This massive Erawan elephant statue is covered with 300,000 copper plates.

The museum is divided into three zones and visitors can begin a tour on the Suvarnabhumi Level, which displays a private collection of rare artefacts, sculptures of deities and porcelain from the owner's chamber that depicts Thailand's rich history.

On view are terracotta glass beads made between the prehistoric to Dvaravati periods as well as beautiful Chinese-style ceramics from the Sukhothai period that feature auspicious motifs of fruits, plants and mythical animals. 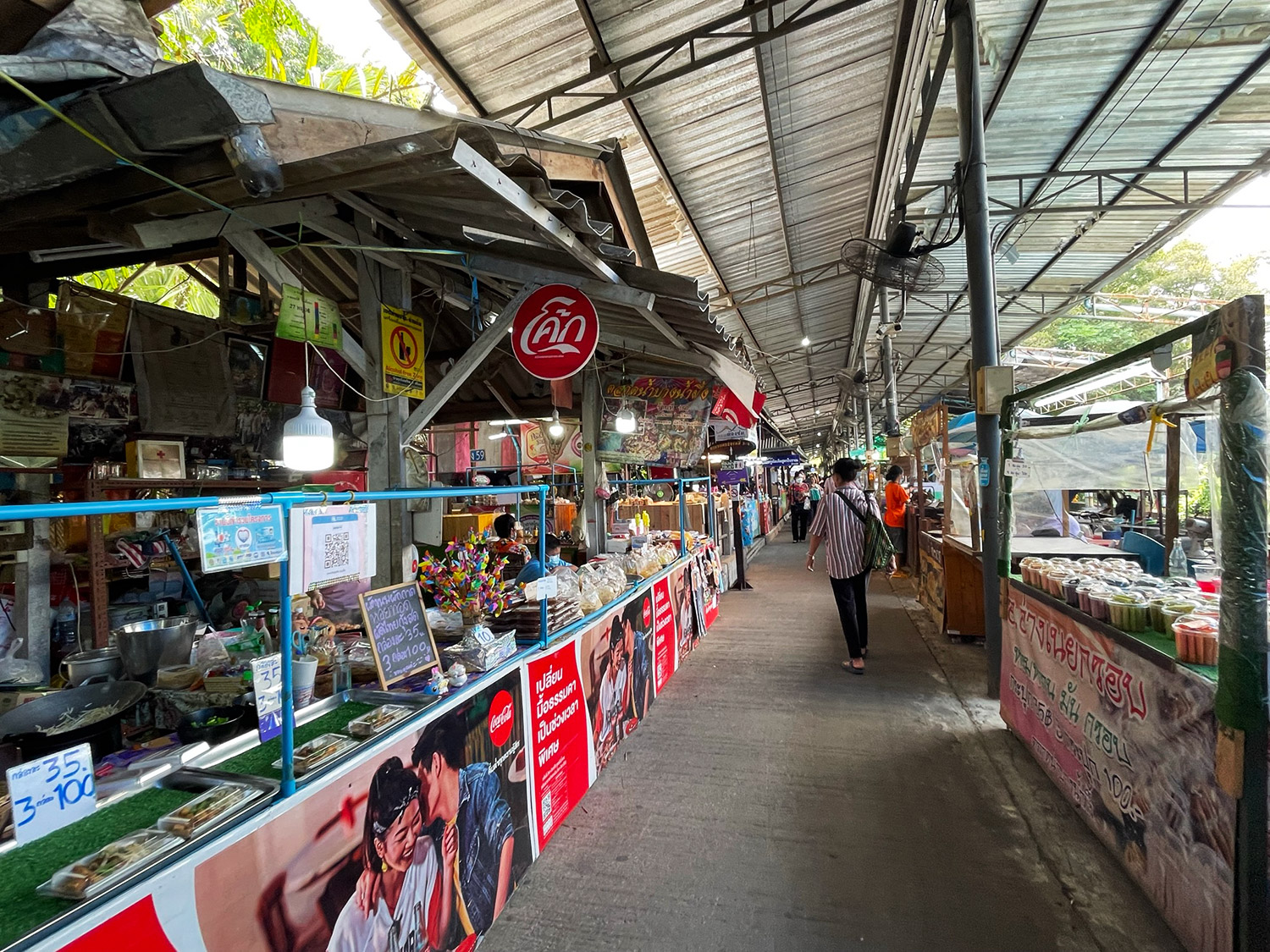 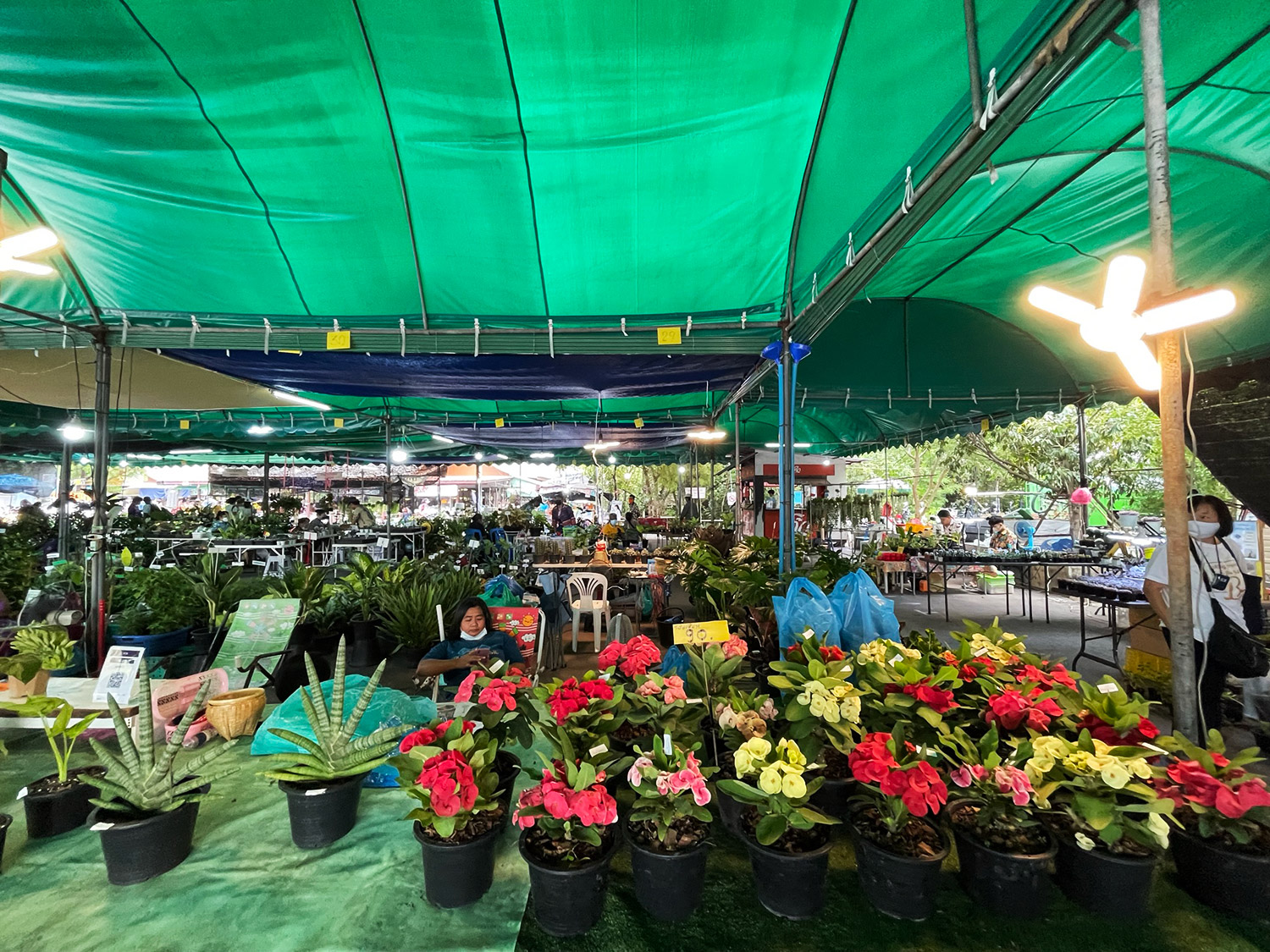 Designed by German artist Jacob Schwarzkopf, the Human Earth Level sports a mixture of Thai craftsmanship and Western contemporary architectural arts that portray the philosophy of life and religion to elevate your soul. There are four colossal pillars graced with refined chasing and repousse work based on four religious beliefs.

The Hinduism Pillar tells the tale of the god Vishnu, the Mahayana Pillar is devoted to the Mercy goddess, and the Christian Pillar captures the origin of humans and demonstrates how Jesus Christ expressed his love to humanity. The Buddhism Pillar depicts the Lives of the 10 Bodhisattvas based on the Jataka Tales.

Meanwhile, the white and pink spiral stairs are embellished with more than 100,000 pieces of Benjarong porcelain, and the multicoloured stained glass ceiling portray the planets and is painted with zodiac signs and significant stars. The Cosmos Level simulates Mount Meru, where the god Indra resides on a mountain peak and is encircled by a row of age-old Buddha statues in different postures.

Before sunset, we rushed to Bang Pu Recreation Center, which is a popular spot for bird watching between October and April when hundreds of gulls migrate from Mongolia, China, Tibet and Siberia. Surrounded by a lush mangrove forest, the Suk Ta bridge was crowded with tourists carrying crispy chicken skins in their hands to attract birds, creating photogenic scenarios.