Chiang Mai's highest rooftop bar is one of its many highlights

Spanish hospitality brand Meliá has gone up North to open Meliá Chiang Mai, its third Thai property following Meliá Koh Samui and Meliá Phuket Mai Khao. If no one tells you that Meliá Chiang Mai stands where the Pornping Tower Hotel stood, I bet you would think that it has been built from the ground up. Look at the before and after photos, you may agree with me that the transformation is very extensive and impressive. 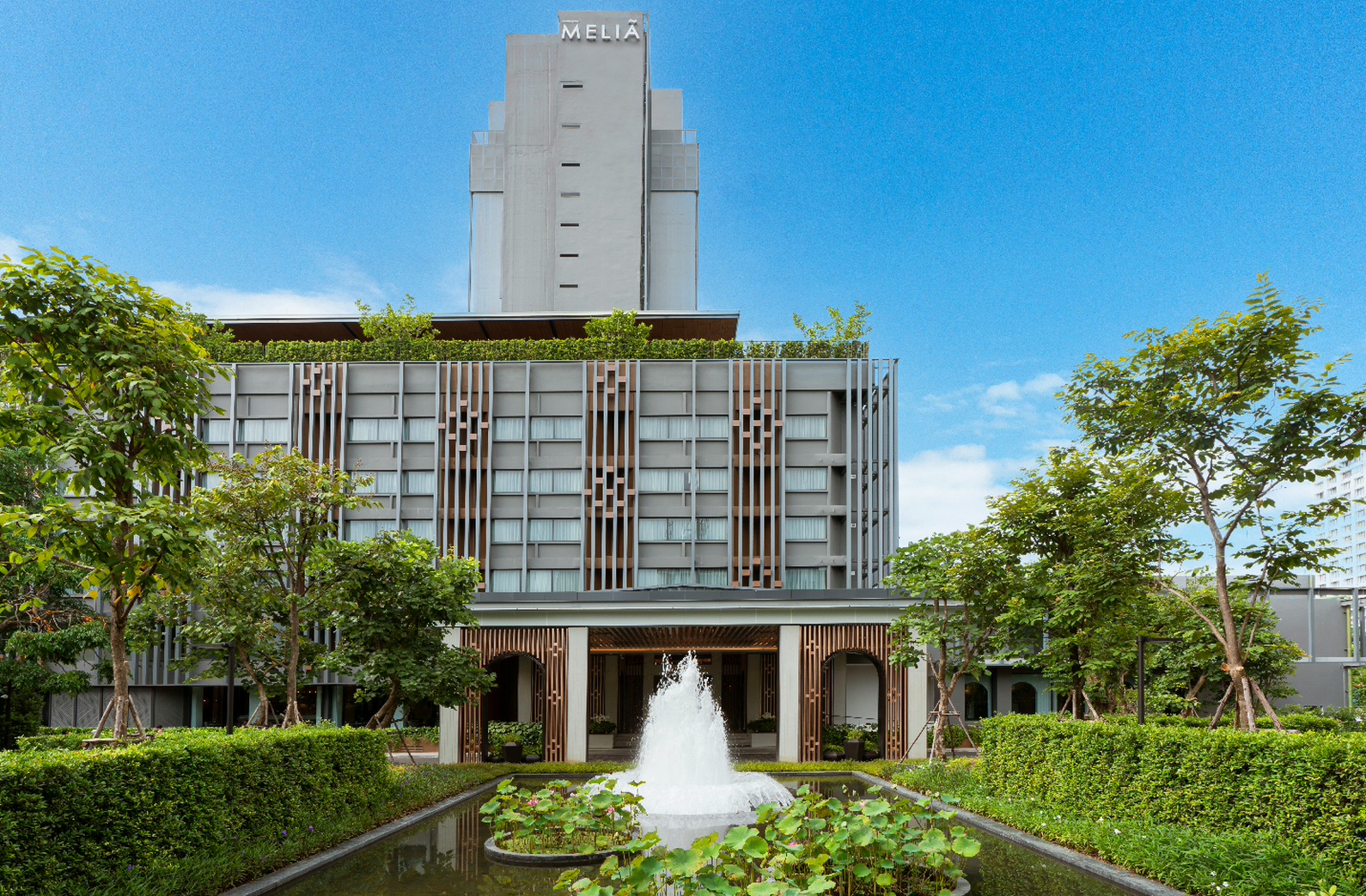 Opened in April, Meliá Chiang Mai is a 22-floor tower and has an adjoining seven-floor building in front of it. Interior enthusiasts (guilty!) would likely take notice of how its stylish lobby exudes a Lanna vibe while remaining contemporary. My eyes were immediately drawn to the piece de resistance of silverwork, whose shape resembles a layered bicone. Hugging it is a delicate white wrap whose shape brings to mind tung sai moo, a Lanna-style flag. Other noteworthy design details are tunnels and arches which add depth to the already spacious space. 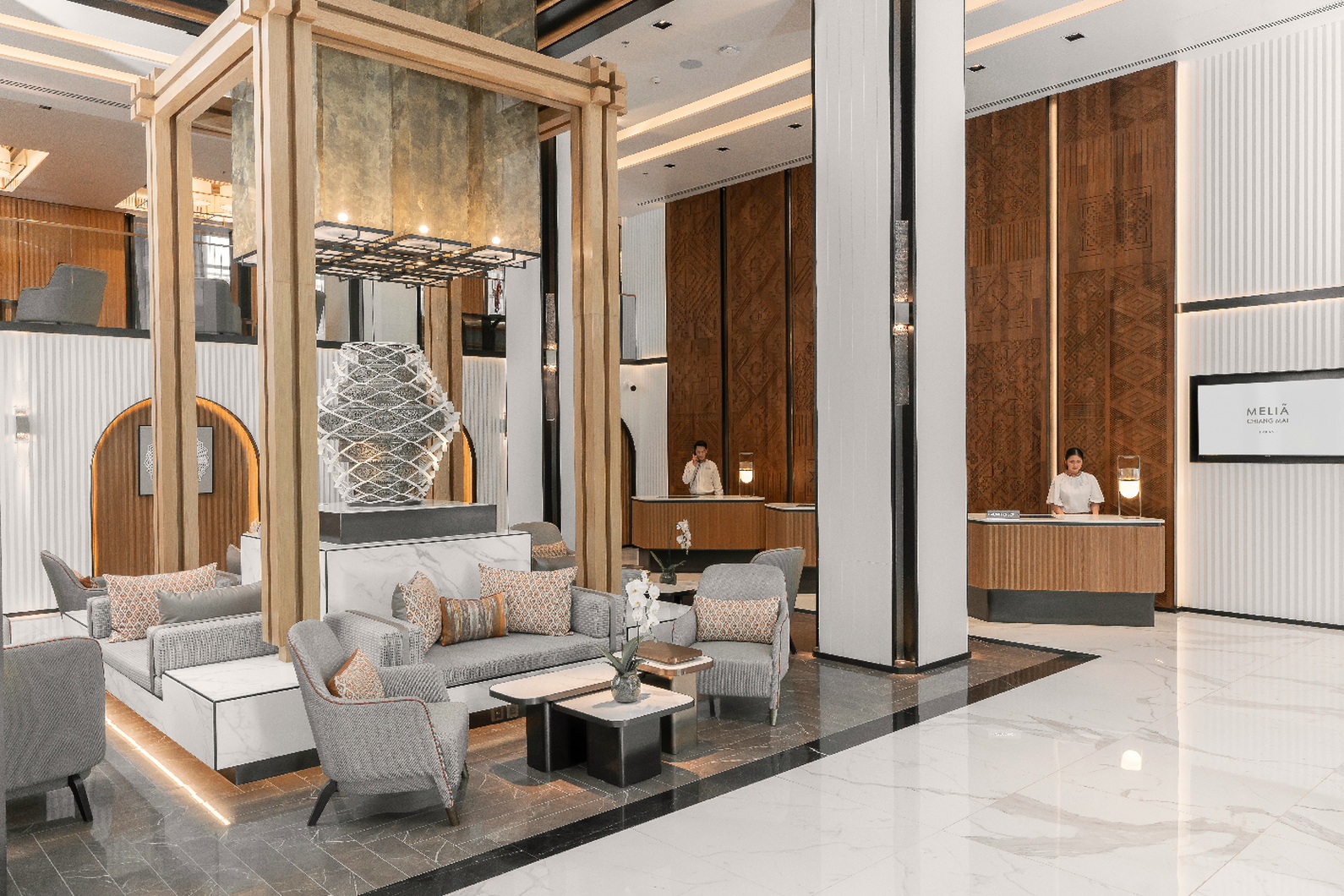 There are more than 260 rooms and suites across nine types, ranging from entry-type 30m² Meliá Room to the sole unit of The Level Presidential Suite, which offers 113m². While other hotels use the word "executive" to denote room types that come with access to their executive lounges, Meliá Chiang Mai uses "The Level" after the name of its executive lounge which is on the 21st floor. More on that later. 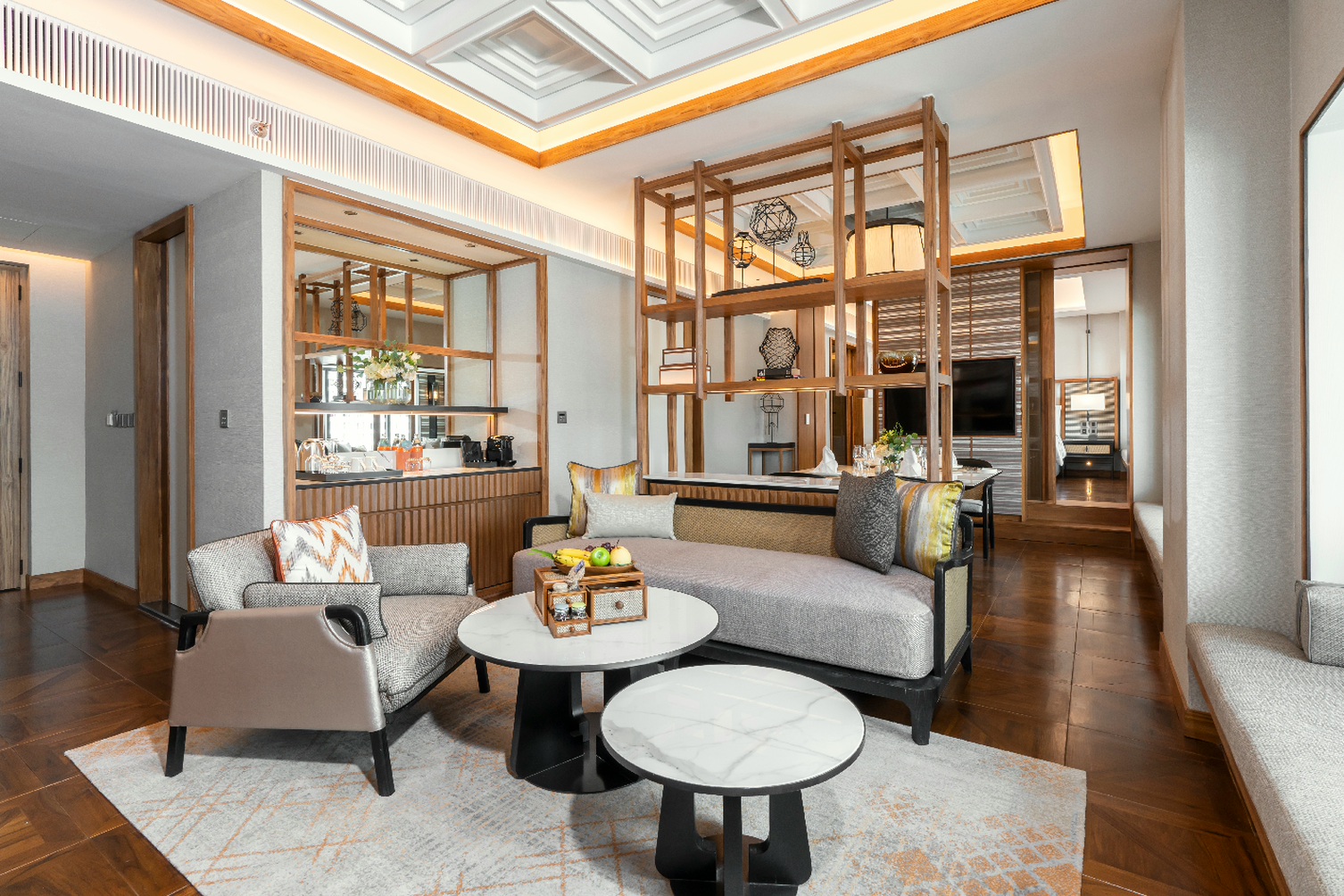 A Meliá Room may start compact at 30m² but there are several elements to make it feel less cavernous. Its tray ceiling adds depth while the window-side sofa gives the effect of an alcove along with views of the city and the Doi Suthep range on the horizon. You can draw up the curtain while showering to make the bathroom feel less confined. If you want to splurge a little, you can upgrade to The Level Room, which has the same layout but comes with special in-room touches such as a capsule coffee machine and terry bathrobes with The Level's logo embroidered on them and, most importantly, access to The Level where more perks await. 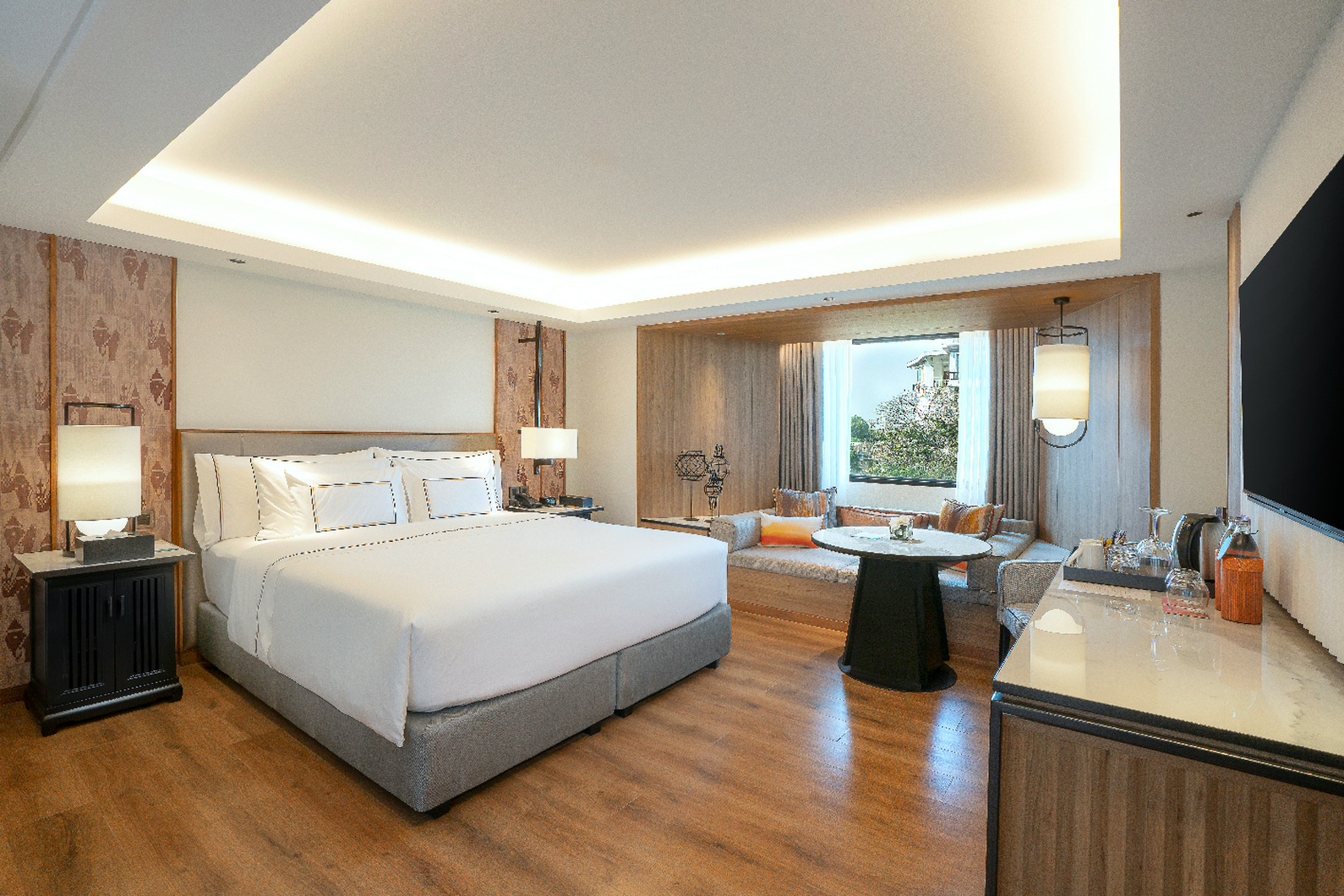 Make the most of your privileges at The Level where you can indulge in bird's-eye views of Ping River or Doi Suthep. The lounge is stylish with Lanna nods such as wooden decor on the ceiling, inspired by the inside of a Bo Sang umbrella. Enjoy less crowded breakfast service, afternoon tea or sundowners with canapes from 5.30-7.30pm. If you're peckish during the day, drop by for snacks and soft drinks from 11am-10pm. If you really need to catch up on work (but I hope you don't have to), a stylish meeting room is available for private use. Should you need to be crisp and neat, redeem free ironing for two garments per guest per stay. Discounts for YHI Spa are also included should you want to be pampered after a long day. 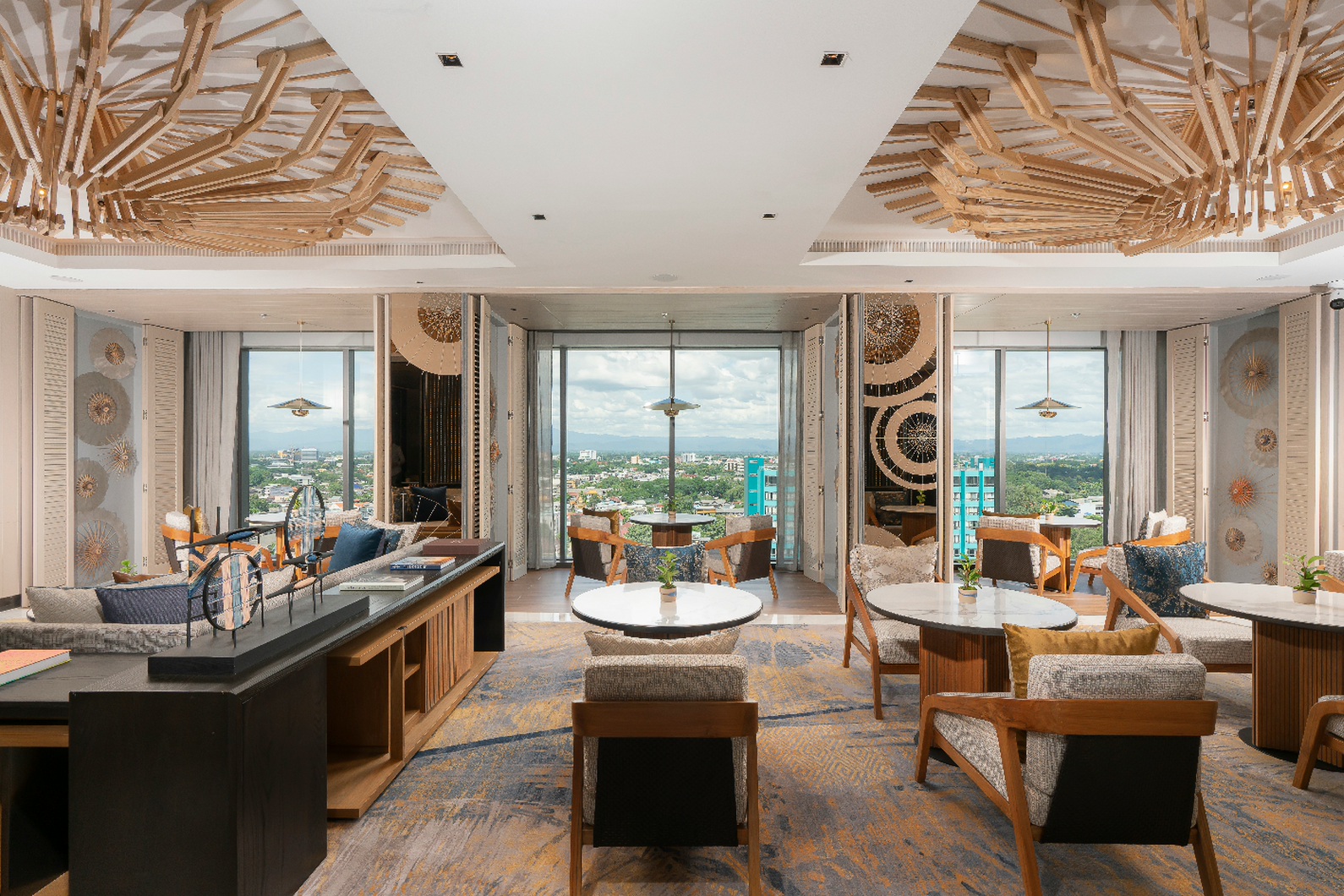 The Spanish side of Meliá Chiang Mai shows up in the brunch spread at Laan Na Kitchen in the forms of sangria popsicles, Spanish-style shakshuka and fideuà (paella but with pasta instead of rice). Of course, you can enjoy khao soi, cold cuts, cheeses and other usual hotel breakfast items that you can think of. The next monthly brunch at Laan Na will take place on Dec 4 so you can celebrate your dad and indulge in one go from noon to 3pm. Preceding Laan Na is Ruen Kaew Lounge where you can enjoy a drink with small bites or an afternoon tea. 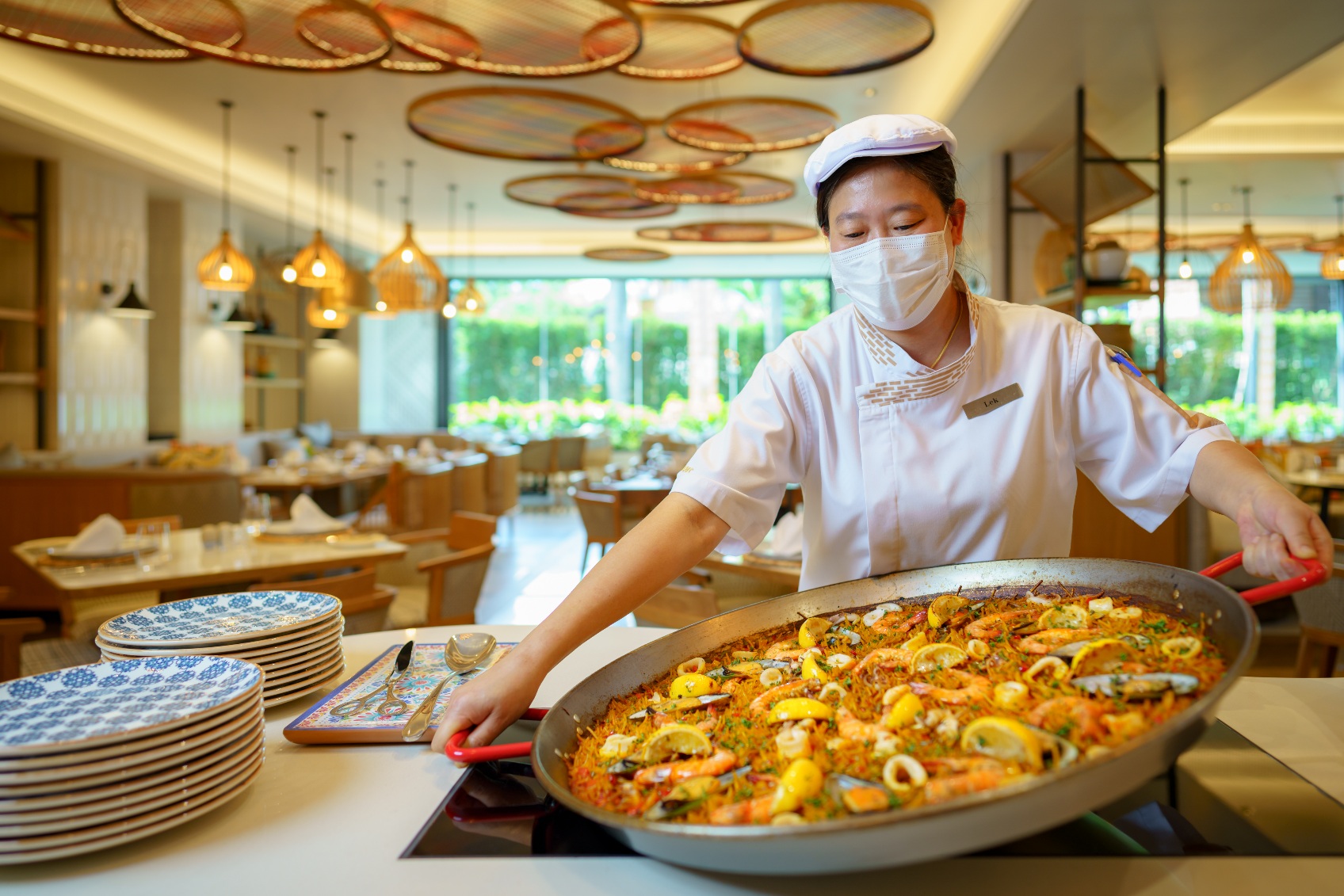 Should you want to try Thai dishes elevated in terms of flavour and form, head to Mai (silk) Restaurant & Bar on the same floor as The Level. Think of Turmeric broth with scallops, herbs and Thai chilli, Fluffy fish salad in betel leaf, Grilled nam prik noom on crispy salmon skin, Vietnamese pork sausage with edible flowers in a very transparent roll and Baked salmon fillet with nam prik ong. 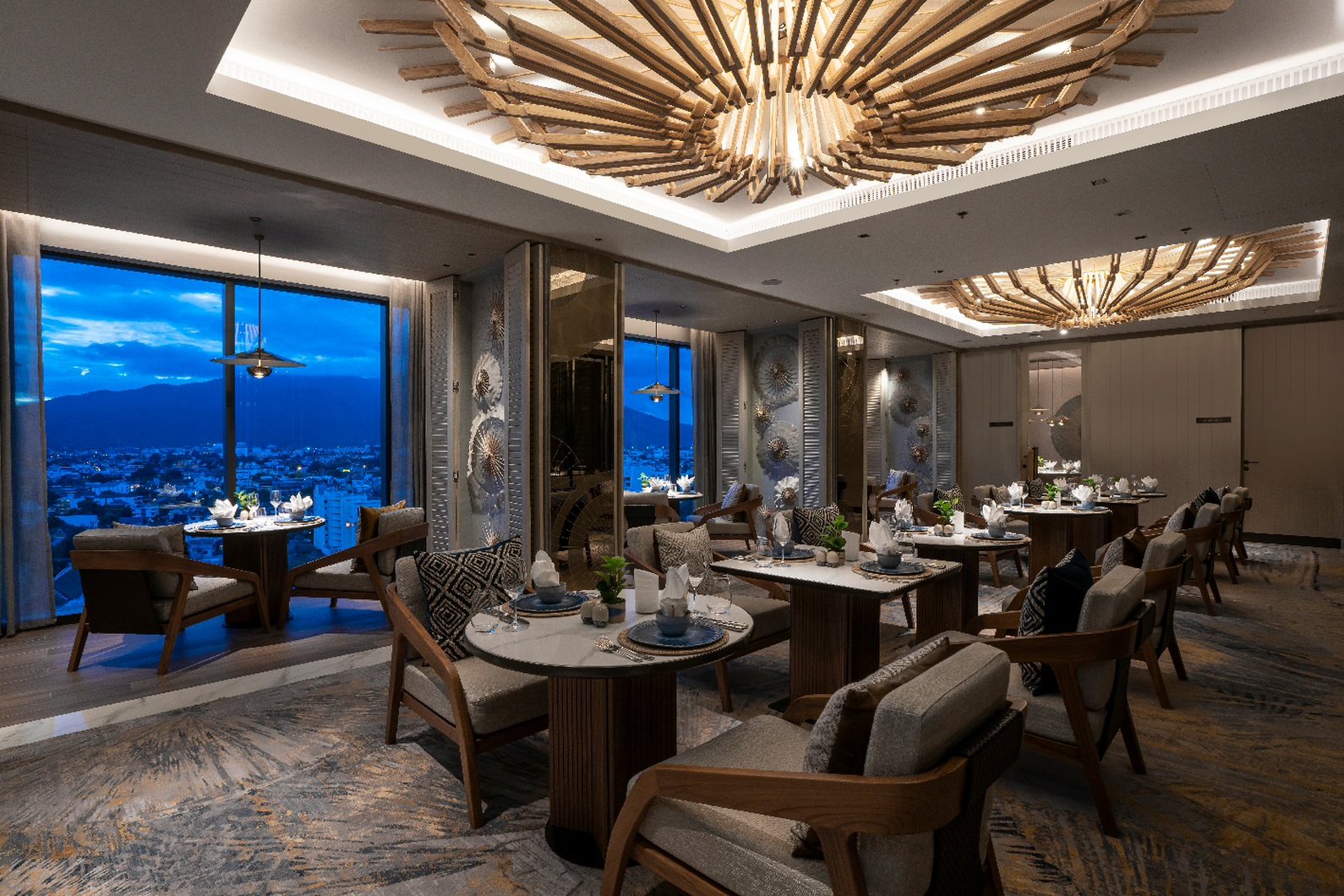 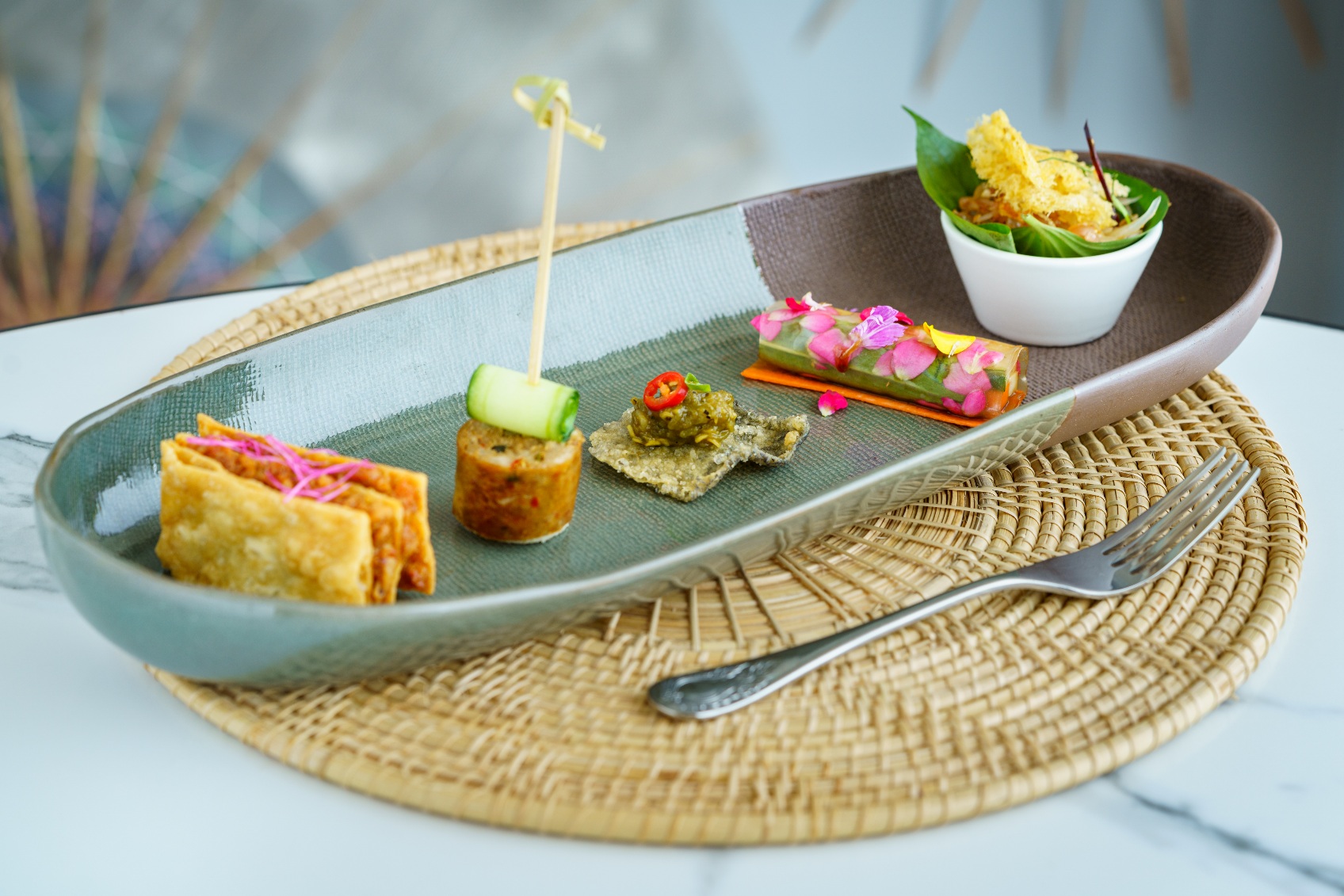 A set of appetisers at Mai Restaurant & Bar.

Walk upstairs to the rooftop, Mai The Sky Bar to enjoy a 360° panoramic view of Chiang Mai at night, cocktail in hand. The bar isn't the highest point as you can go up to a glass walkway for a vantage point to enjoy the views and breeze. The sky bar is definitely a high point (pun very intended) of Meliá Chiang Mai and if you're planning to countdown in Chiang Mai you may want to consider securing a seat here to enjoy the fireworks. 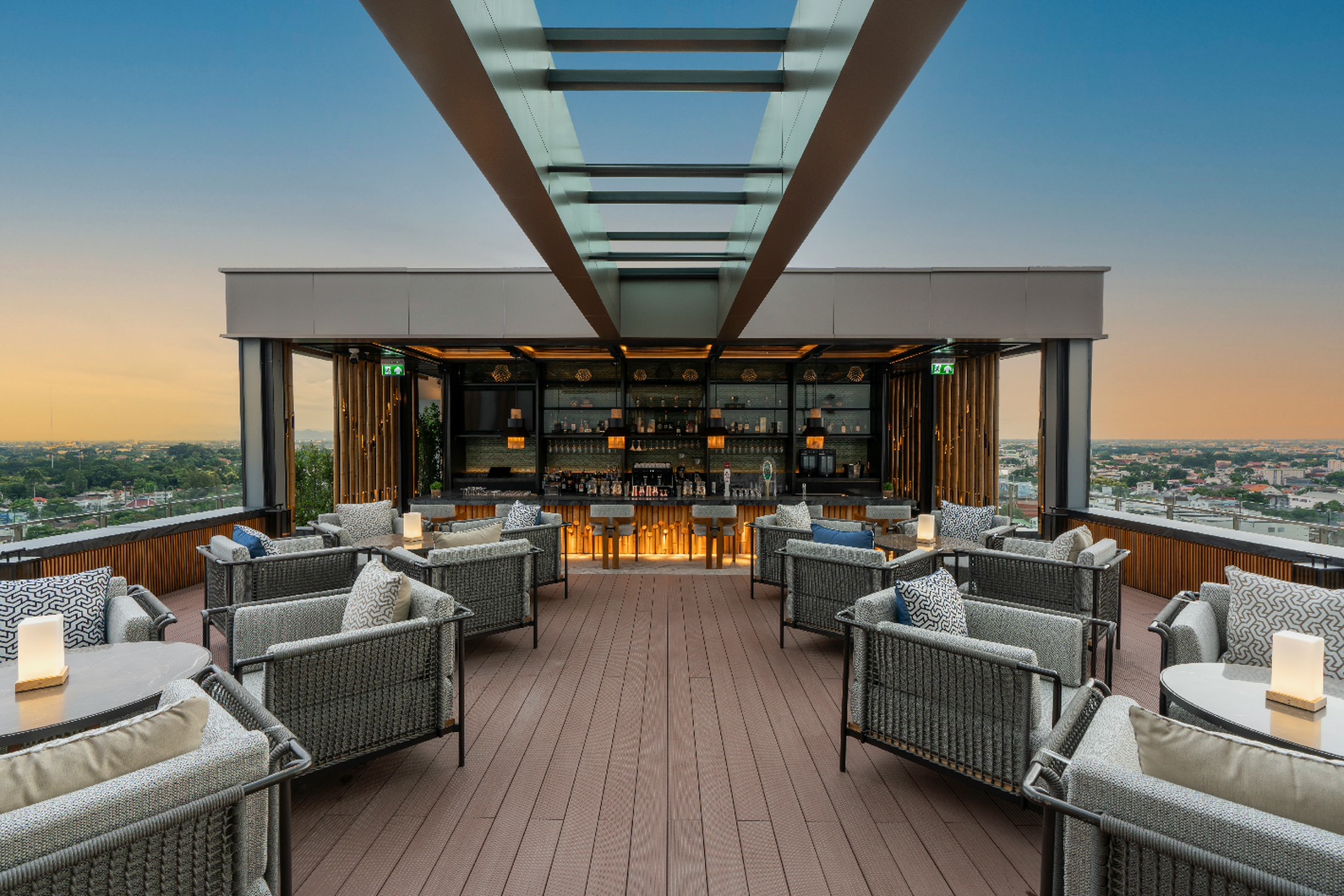 After swimming a few laps at the outdoor pool, refresh at the adjacent Tien Pool Bar. Stack on track with your fitness journey at the well-equipped gym open 24/7. Meliá Chiang Mai isn't kidding around when it comes to catering to young guests with The Kidsdom, an expansive space for children between the ages of three and 16 to enjoy various activities such as cooking, yoga and umbrella painting. Since it's a kingdom for kids, some very tall adults may have to hunch a little while in it to avoid bumping their heads into the ceiling. 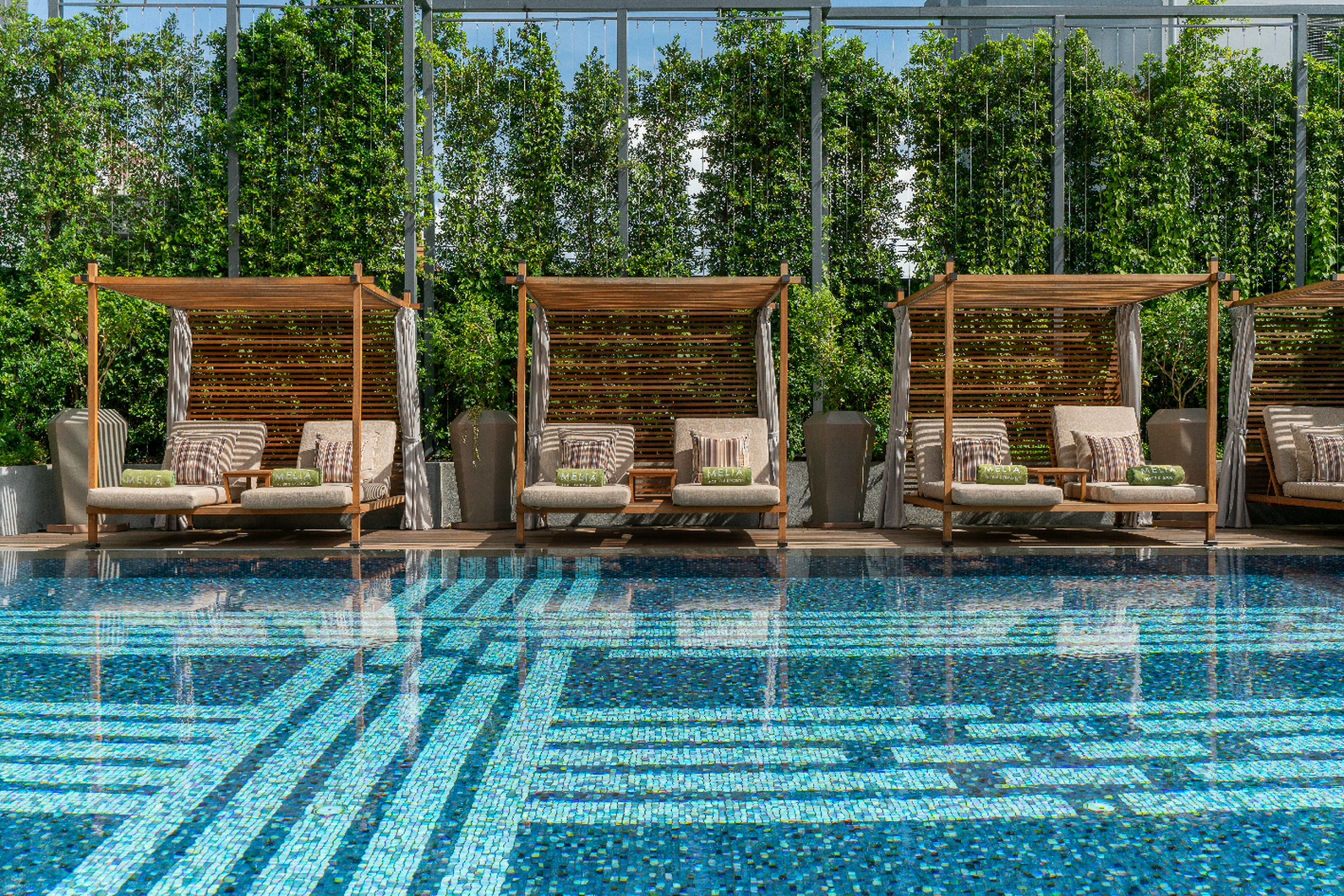 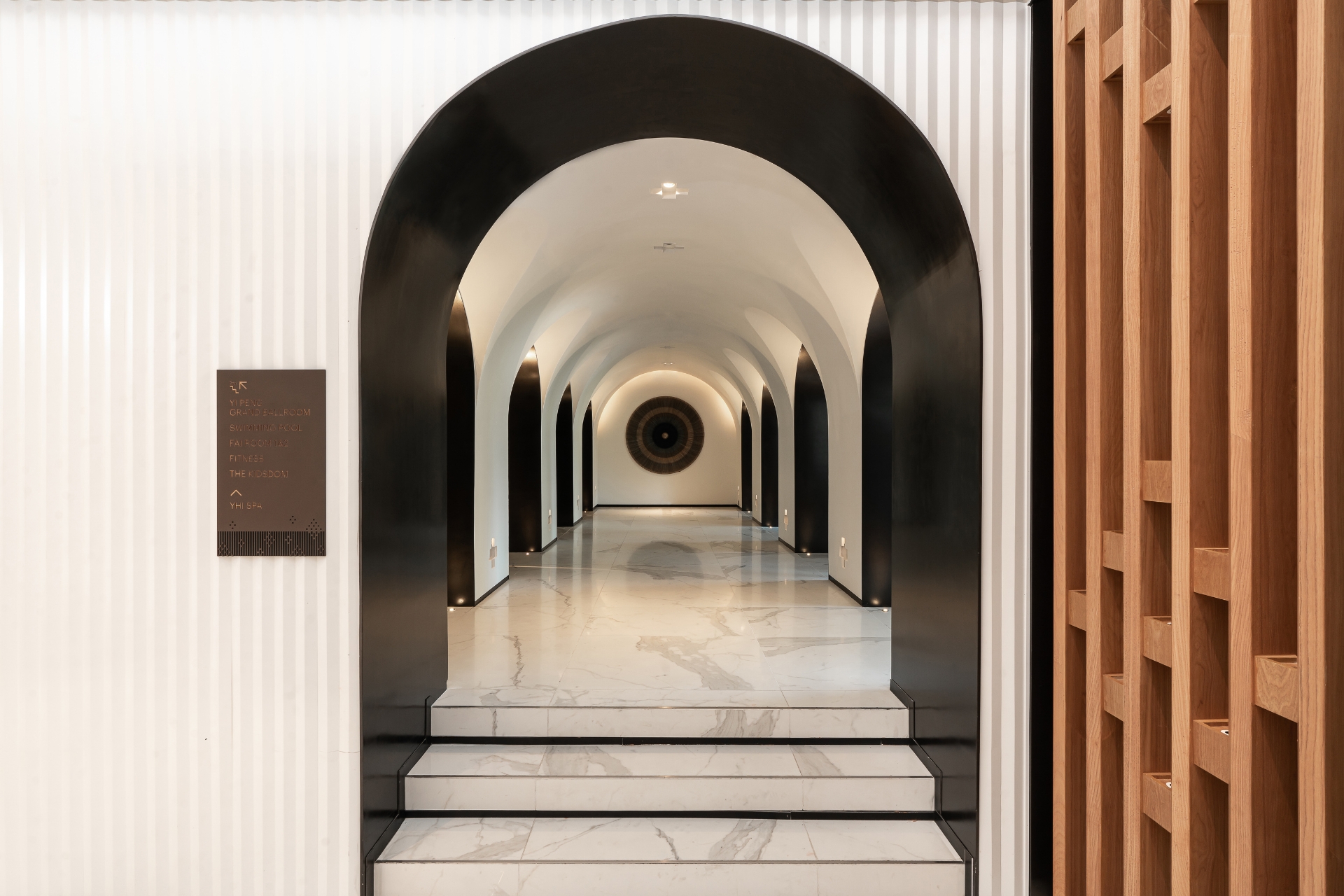 Do make a point to get pampered at YHI Spa if you're an arch enthusiast. Meliá's signature spa makes a lot of use of round arches and recessed wall lights in its interior, giving the space an enchanting/mysterious vibe. A few hours in there feel like a real escape.

Melia Chiang Mai is less than five minutes on foot away from Chiang Mai Night Bazaar. Instagrammers should visit Kua Lek Bridge, which is even closer to the hotel by foot. The historic iron bridge over Ping River is beautifully lit up at night, serving as a setting for your IG shots.

Regardless of the room type you're staying in, you'll find at least one steel frame decorative object inspired by Lanna-style khom (lanterns). You can learn to make a khom at Chiang Mai University's Lanna Traditional House Museum (but make sure you have deft fingers and lots of patience). There, you can also learn about traditional Lanna houses and their way of life.

Wat Umong (Suan Buddha Thamma) is a 20 minutes drive from the hotel and is not to be confused with Wat Umong Mahathera Chan. I recommend the former, which is near the foot of Doi Suthep, as it offers a rather unique vibe where you get in touch with nature and Buddhism. Wat Umong has a tunnel that you can explore and pay respects to Buddha images on top of its moss-covered surrounding.

For a gay time, the Ram Show Bar is around the corner from the hotel. It's where you can find cabaret and drag shows. Showtime begins at 9.30pm. 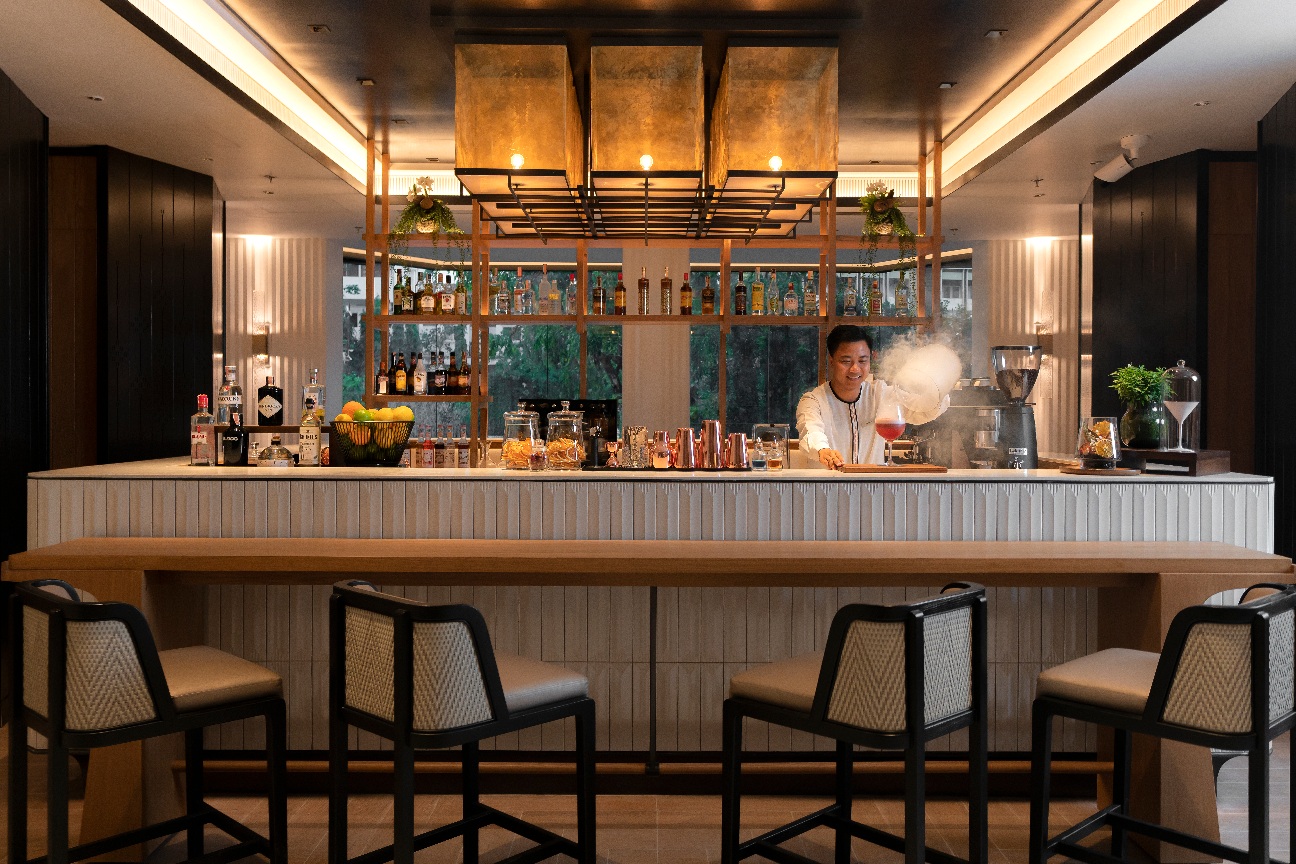 A stay at Meliá Chiang Mai comes with a lot of styles while its location affords you many choices of things to explore. You can shop for room vouchers via Line Shopping at shop.line.me/@meliachiangmai. Until Nov 30, a stay in Meliá Room costs B3,999 per night while a stay in The Level Room costs B5,799. The room voucher is valid for stays until Mar 31, 2023. Blackout dates apply. More info at melia.com.