Payap "Pong" Khunkhayam encountered numerous problems while developing a farm for Conrad Koh Samui. A 5 rai plot of land given to the resort three years ago by one of its investors was an overgrown jungle on top of mostly infertile red clay soil. Pong, the resort's bellman, was tasked with creating a farm that would eventually provide Conrad's restaurants with most of its food.

With the billion-dollar global apparatus of the Conrad-Hilton luxury hotel chain at his disposal, Pong, 41, knew exactly what he needed to do to overcome roadblocks. He called his mother. He instinctively knew that while some problems were solved with money, others required local wisdom.

Raised in a farming family in Chiang Rai's rural Wiang Kaen district at a time when buffaloes tilled the fields, Pong listened as his mother reminded him of the lessons of his youth -- how to repel pests using natural remedies, the proper way to cultivate vegetables on terraced land. Eventually, the crops and plants stopped dying, and a raw, working farm was born. On an afternoon in late November, Pong recalled those early days.

"The soil was very hard and it was difficult to plant. Everything kept dying," he said. "But we were determined to succeed." 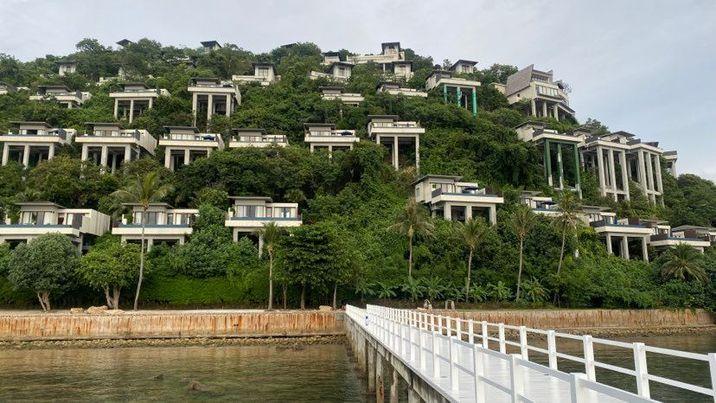 All of the Conrad Koh Samui's 81 private villas face the Gulf of Thailand, providing breathtaking views, especially at sunset.

Today the farm, known as Project Iris, provides Conrad with 65% of its food needs. It rotates several dozen crops of vegetables, fruits and various herbs throughout the year and maintains over 100 ducks and chickens that provide the resort with an average of 8,000 eggs per month.

The Conrad also partnered with a nearby farm to raise pigs that provide it with all its pork needs. Eventually, the goal is to source nearly all of its food at the farm or on the island of Samui to service the resort's extensive dining services that include three restaurants, a cafe, in-villa dining options and a seaside cocktail bar.

On any early morning visit to Project Iris, Pong can be found hunched over, harvesting vegetables or collecting eggs spread across the compound, his face marked by a beatific smile aimed at no one in particular. While he left his hometown over 15 years ago to seek a better life, his heart remained on working the land. The farm keeps him connected to his family, he said, noting: "I feel happy every morning when I arrive to work."

As an unintended consequence, the farm has become a tourist attraction for hotel guests as well as others staying on Koh Samui. 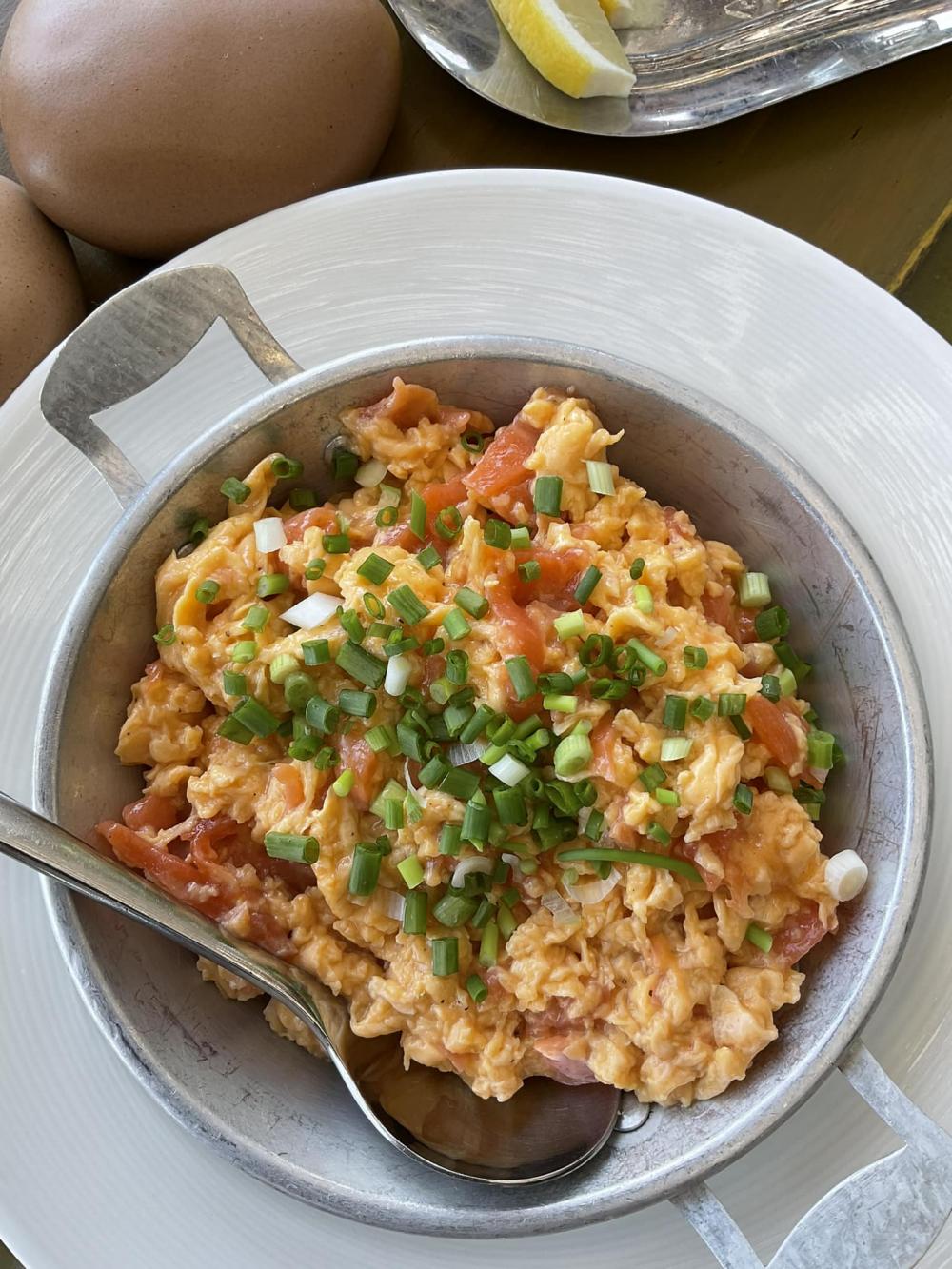 Scrambled duck egg and smoked salmon. Ducks and chickens raised at Project Iris provide the Conrad with 8,000 eggs per month.

Tours of the farm are conducted twice a day. Guests can plant trees and follow the growth progress after they go home through photos supplied by the resort. Agriculture and hospitality students also are frequent visitors, along with hotel consultants from around the world, said Ruben Gabiño, the resort's general manager.

While coming home knee-deep in mud and soaked in sweat may not be the first activity one associates with staying at an ultra-luxury hotel (Conrad rates start at 14,700 baht per night), Gabiño says the farm's popularity points to a shift in the luxury market.

"Guests are seeking a more authentic experience. You can provide a room on the beach with fabulous views. But it's not good enough. They want to learn about the local culture. They want to experience it," he said.

The Conrad's 81 villas indeed do come with phenomenal views. Perched high on a hill on the southwestern tip of Koh Samui, all villas overlook the Gulf of Thailand with breathtaking views of the sunset. Looking out at the horizon, one feels as if they have reached the edge of the world. But the farm, with its unruly layout -- terraced in some parts, plateaued in others, connected by a maze of muddy pathways -- along with a pastoral silence interrupted by the cackle of ducks and chickens and the bleating of goats, grounds you, Gabiño said. 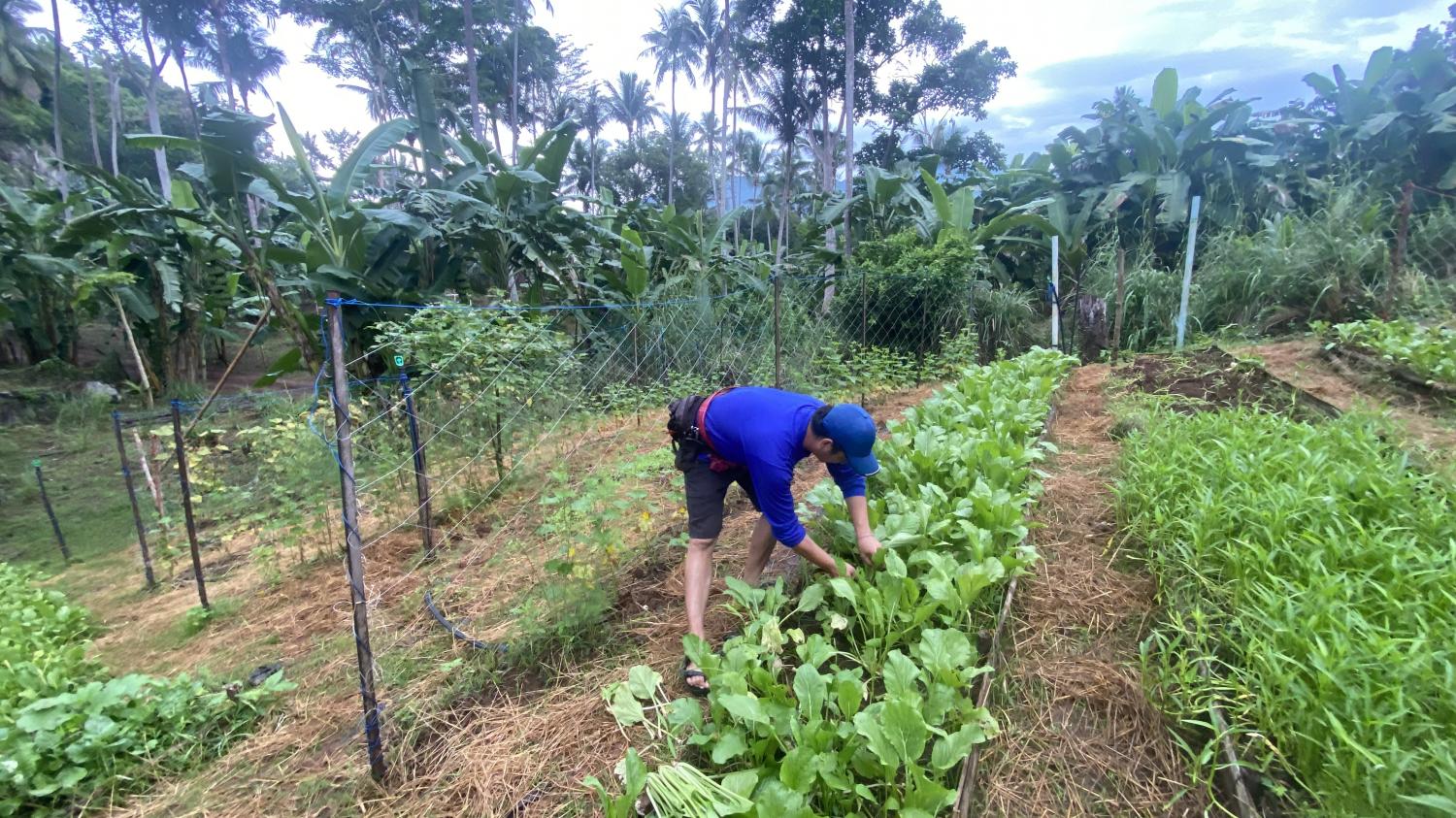 "This was going to be a working farm. It didn't have to look pretty," he said.

"The farm serves as a template for our other properties to replicate," Murray added.

Pong serves as an embodiment of the Buddhist principle of compassion for all living things, forming a parental attachment to the animals that wander about the farm. The goats were brought in initially to clear the land of weeds but remain under Pong's care with no clear role, except to die of old age. He still mourns the death of the property's first goat, Tanjiro, creating a small shrine to the animal in the farm's shack. 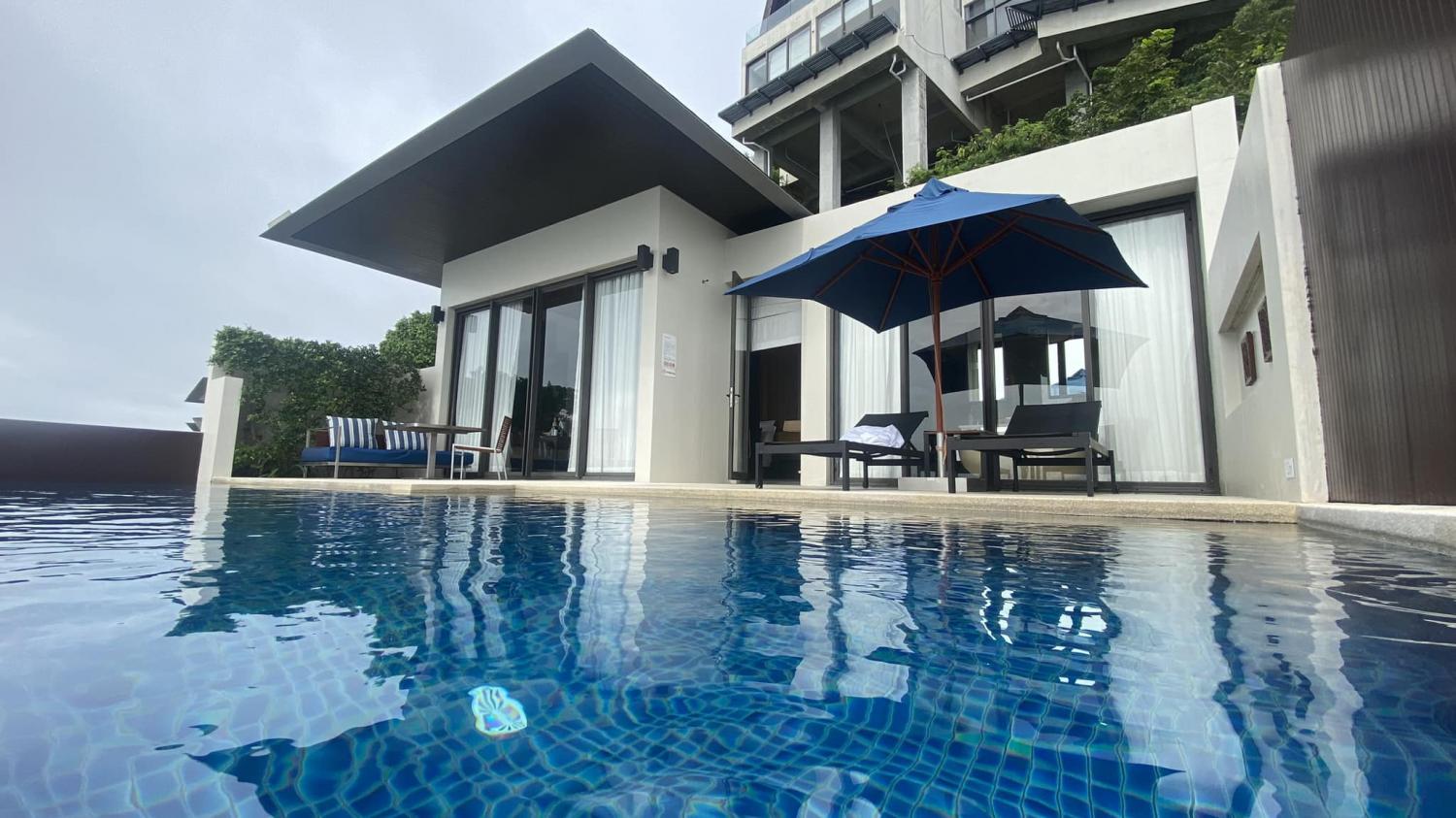 Hotel management also introduced rabbits to the farm earlier this year, with the hope of breeding them as food. Pong, who raised them as bunnies and nursed them through illnesses, objected to their slaughter, with his Buddhist sensibilities eventually prevailing. The farm is now home to a rapidly growing group of rabbits that in time will be in need of a good home. For now, they're a big hit with young visitors, Gabiño noted.

Jesper Jensen, a Phuket resident who stayed at the hotel earlier this year with his wife Ivie and sons Tony, 10, and Sam 11, said the boys have been pestering him for a return trip to the Conrad.

"Our kids visited the farm almost every day, taking part in feeding the animals and harvesting the crops that later served as our dinner. They were very proud to have taken part in the process," Jensen said.

The farm, combined with other resort activities like cooking classes, paddle boarding and snorkelling "created an atmosphere that is hard for us to forget", he added. 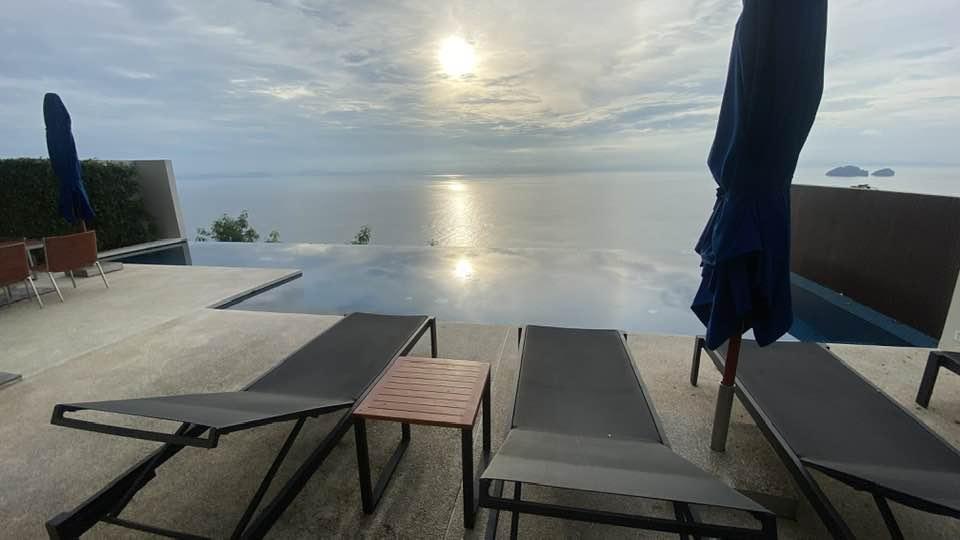 It was Gabiño who conceived the idea for Project Iris, entrusting his bellman Pong to carry out his vision. "Pong was a very good bellman, exceptional really. But he's a great farmer," Gabiño said. "There are Pongs everywhere. If you give them the freedom to do their job, they are going to do wonderful stuff." 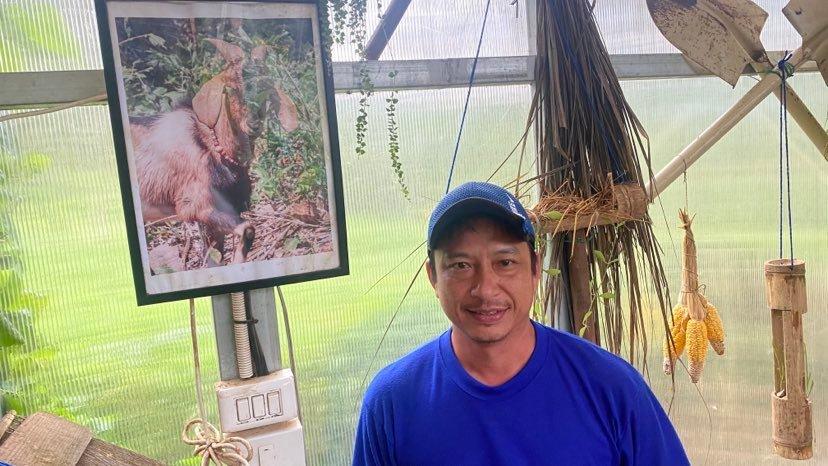 The Conrad's staff set up a small shrine to Tanjiro at the Project Iris farm after the goat died. 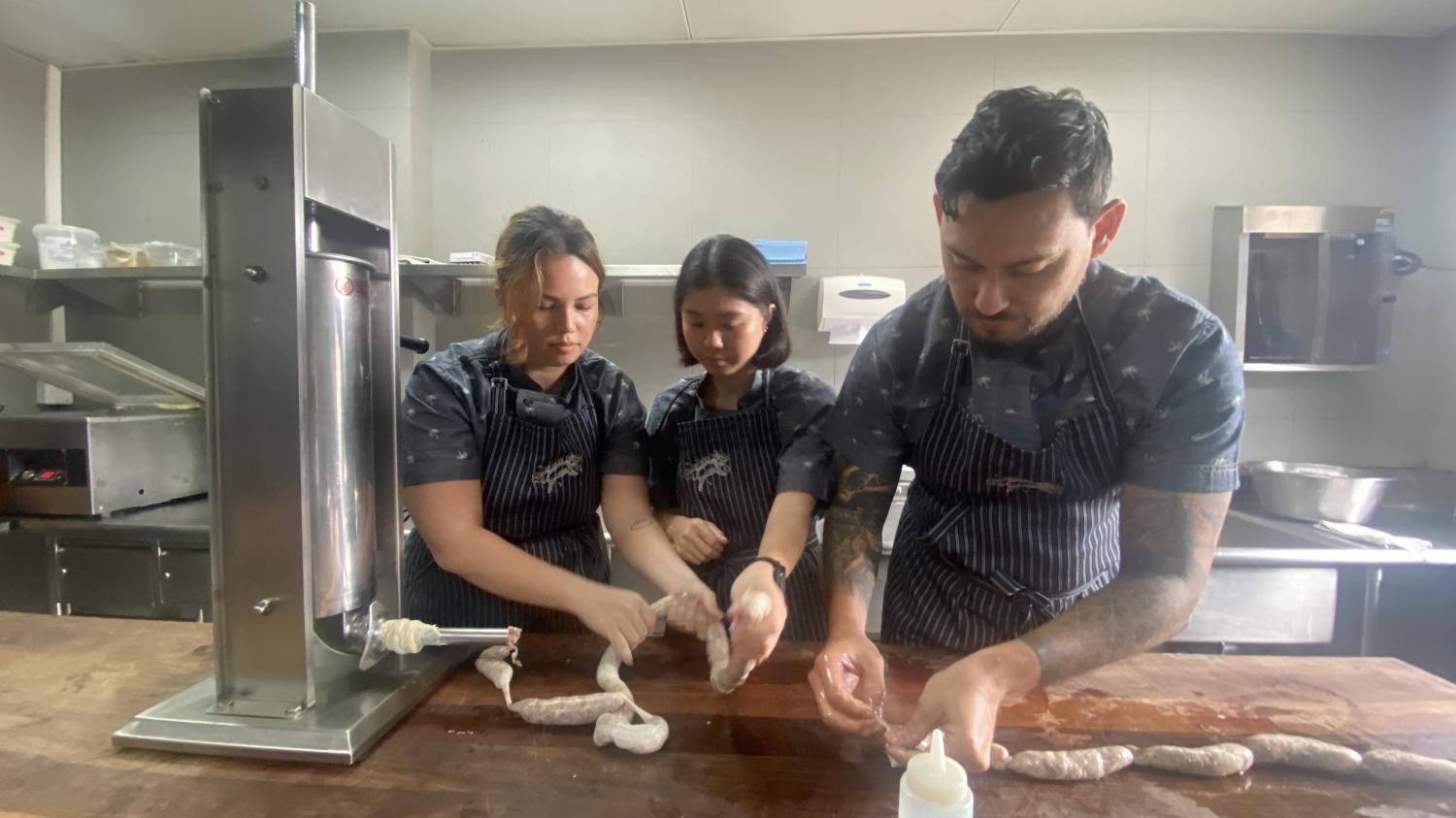 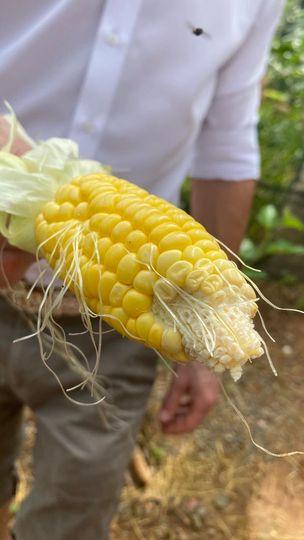 Project Iris is 100% organic. While some of the crops aren't suitable for retail, the hotel's restaurants use every item it grows. 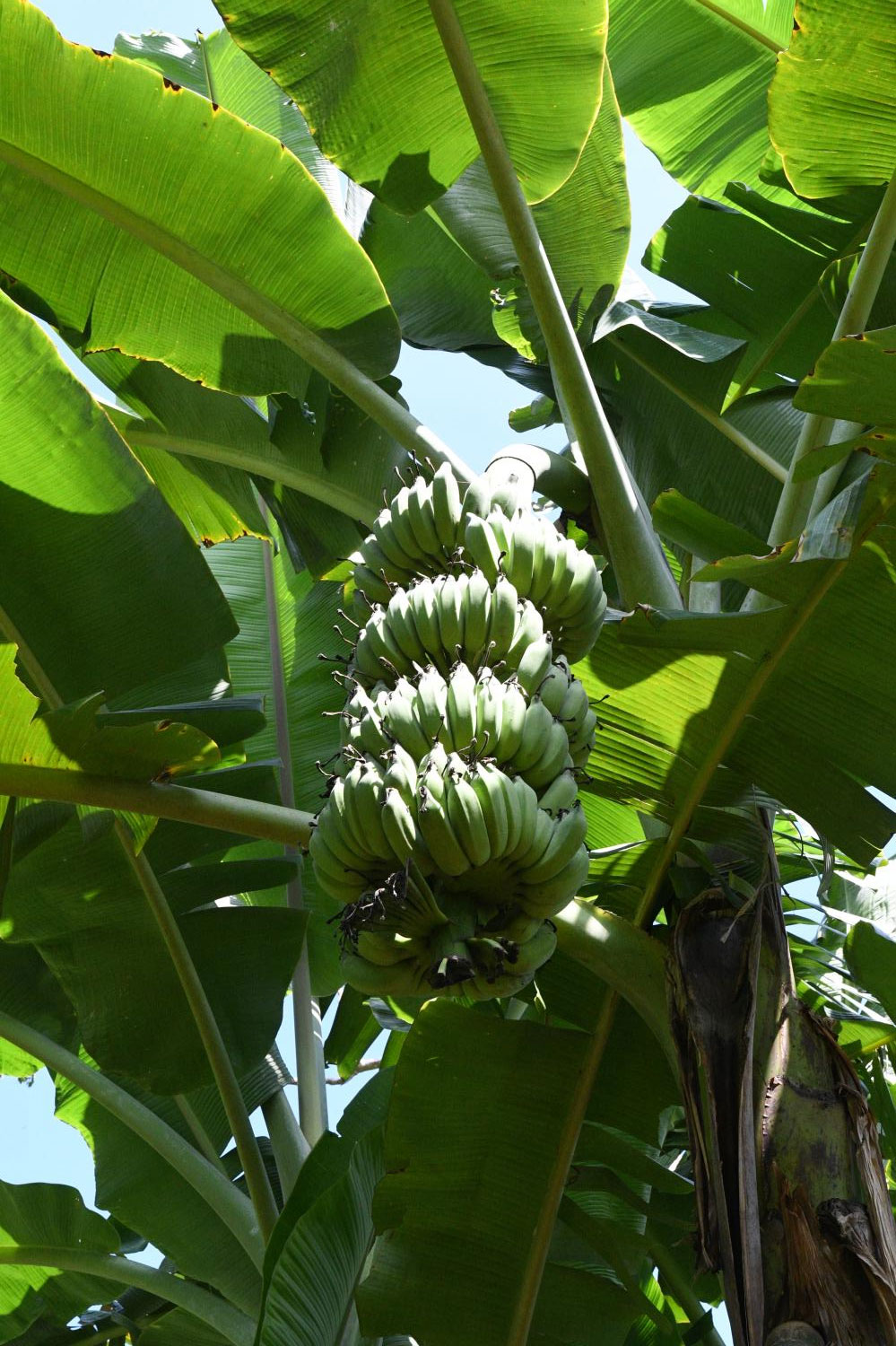 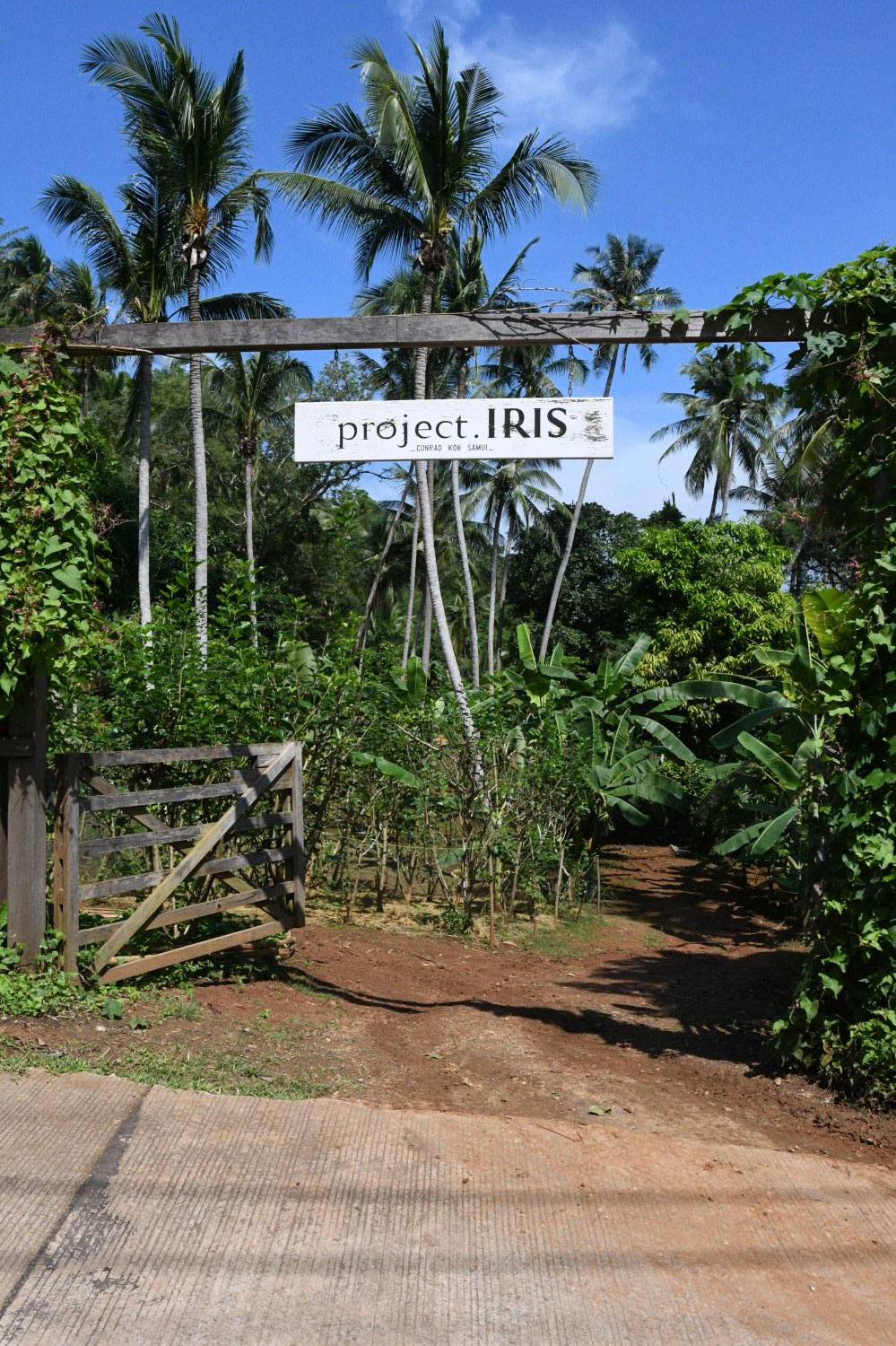