As the curtain begins to lift, Burma emerges as a destination with something for everyone

As travel books dispel the mystique of remote spots worldwide, places that have preserved their unique character become ever harder to find. North Korea has been notoriously isolated by its ruling dynasty. Less in the global spotlight is the luminous land of Burma, known officially as the Republic of the Union of Myanmar. It, too, has suffered greatly under a brutal regime, but while its military junta has kept the world out, it has also perfectly preserved the culture within. 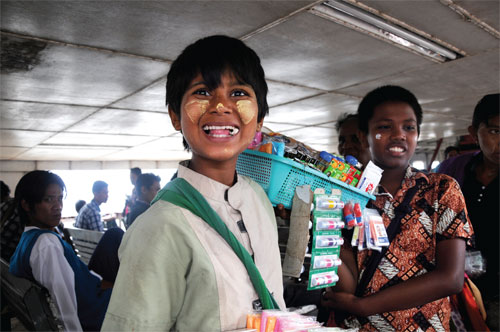 Once an impossible destination for the casual tourist, the country is slowly letting its global guard down. While far from being the backpacking utopia that Thailand is, and probably not a suitable destination for anyone disturbed by poverty or a lack of modern facilities, a trip through Burma rewards the willing with a bounty of colour, charm and inspiration.

Most visits begin in Yangon. It's a spacious ex-capital, relieved of that burden in 2005 by a government which mysteriously relocated to Naypyidaw, in the north, at huge expense ($50 million is the Lonely Planet estimate).

A stroll around downtown Yangon draws polite glances from the locals and the occasional question from braver souls. The architecture is as charming as the residents, with the city's poverty, as much as its British colonial heritage, on show at every street corner. The gutters are tinted brown, probably as a by-product of betel-nut chewing, still a widespread habit here. Pictures of Aung San Suu Kyi have begun to emerge on street stalls and in apartment hallways, something which would have been unthinkable 12 months ago and is a reflection of the shifting political landscape.

The jewel of Yangon is the sparkling Shwedagon Pagoda that sits atop Singuttara Hill, and can be seen from much of the inner city. You may find yourself returning for a second or third visit to this spectacular temple complex.

Added to over the centuries by one king after another, it is said to house more gold than Buckingham Palace, but its real worth is the spirituality it evokes in the throngs who visit it every day. A $5 entrance fee is asked of foreigners at a booth to the left of the main entrance stairs. It's respectful to cover up bare limbs. The best time to arrive is around dusk when the golden mount begins its nightly twinkle. The temple is open until 10pm and attracts a very mixed crowd of all ages. Guides will find you and offer a tour for a few dollars _ which can offer insights into the history and spiritual significance behind the awe-inspiring glitter.

Another attraction in Yangon itself are the busy streets that teem with colour and life. A boat can be taken over the river to the township of Dala, where a stroll around the community prompts curious gazes and (usually) some banter. It's a poor neighbourhood so don't expect any Western-style infrastructure (at all). Kids emerge on the ferry and at other tourist sites, asking for money and food. It is every traveller's responsibility to avoid creating a financial dependence on visitors. Instead of giving these children cash, buy them something from a street stall or get them some food from the market.

Bagan, a rich architectural treasure chest in the central plains, is a great portal into Burma's past. The history of this country is full of violence, transitions and extremes, from periods of massive cultural productivity to crushing poverty under dictatorial rulers. Bagan is home to thousands of pagodas that were built during the country's most prosperous era and now sit timelessly in a dusty, sun-drenched valley of the Irrawaddy River.

Another popular destination is nearby Mandalay, which is fast becoming an education and business hub, thanks to an influx of Chinese investment. It's a good base from which to explore the surrounding countryside on day trips. Inle Lake in Shan State also draws visitors, less so of late due to armed conflict in the region.

Down south on the Bay of Bengal, Ngapali Beach in Rakhine State boasts postcard-perfect stretches of sand, mild weather and an array of hotels and is popular with package travellers. But even in such ''touristy'' spots, the beauty of Burmese culture is still very apparent.

While the most comfortable time to visit Burma is between November and February, before the heat and rain of later months, the best time to visit is surely now, before the changes looming on the horizon take effect. But in a country with such a tumultuous history, it's anyone's guess what will come next. 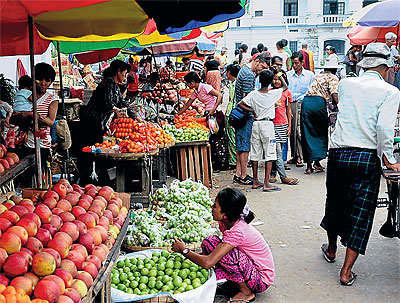 Anyone thinking of making a trip to Burma needs to pose the question: Should I go or is it better if I stay away?

Aung San Suu Kyi famously suggested, in the mid-1990s, that foreigners not visit the country in order to prevent their dollars being used to fund the Burmese military. But the Lonely Planet suggests this was largely due to the government declaring 1995 as ''the year of tourism'' and its heavy-handed tactics to make this happen, such as the eviction of residents from some part of Bagan for the sake of potential profits. There are arguments for both sides, but sensitivity is required.

People who take package tours, for example, benefit the junta more and the locals much less than, say, an individual traveller who shops at local markets and stays in guesthouses.

A great account of the country's history is given by Thant Myint-U in River of Lost Footsteps. He is the grandson of U Thant, UN secretary-general from 1961 to 1971, and he recently released another book, Where China Meets India, to critical acclaim.

George Orwell was posted to Burma where he served in the Indian Imperial Police from 1922-27. The novel Burmese Days was based on his experiences there. 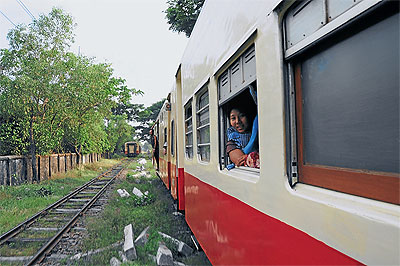 GETTING THERE AND GETTING AROUND

- For most visitors, Yangon airport is the point of entry. While land borders are open, internal road travel is impractical because of political disputes between ethnic groups in different part of the country. THAI, Air Asia, Bangkok Airways and MAI operate flights between Bangkok and Yangon, mostly on a daily basis.

- A number of domestic airlines operate within Burma and are regarded as safe. For foreign travellers, bus travel has much to recommend it; since, while it can be slow, the profits end up in more appealing coffers. Train travel can be rewarding but it is run by the government. 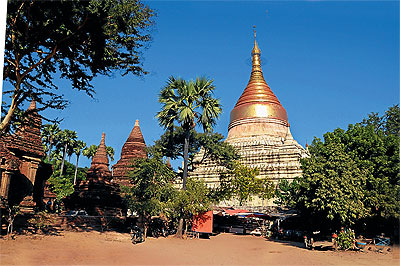 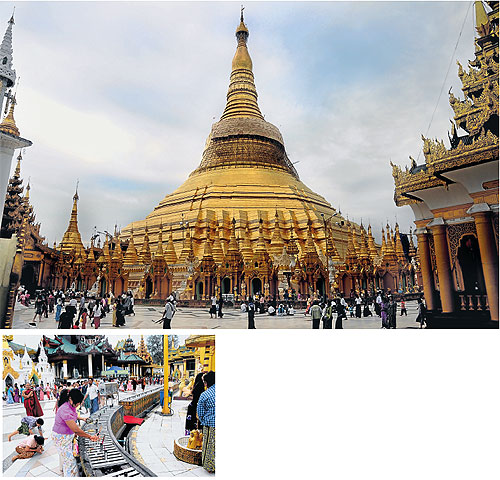 The spiritual heart of Burma, the 100m-tall Shwedagon Pagoda towers over Yangon and is believed to be more than 2,500 years old. It was the site of the September 2007 uprising that saw thousands of monks defy a government ban on public assemblies. It remains as a monument to that moment and many other significant events in Burmese history. In a culture where the public expression of emotions is still very muted, activities around the pagoda seem to be conducted in a freer, more relaxed manner, somehow. Go at sunset to capture the place at its golden best. But don’t forget to take in the whole scene; the local crowd is only half the spectacle. 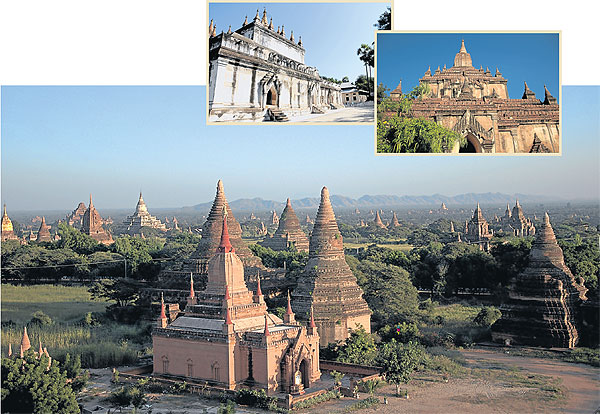 The Bagan area is home to literally thousands of pagodas. To get away from the clamour of tourist buses, explore some of the less-visited temples. All that is required is a 10-minute journey down one of the unsealed roads. This is where the atmosphere can really sink in. 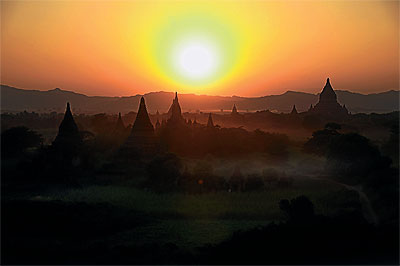 With the sweeping views it offers of sun-drenched, stupa-littered plains, the platform at Shwesandaw Pagoda is a popular spot for watching the sunset. The stairs up might be too steep for some, but the climb is well worth the effort. You might find the second tier more comfortable; the crowd tends to be smaller, but the view is comparable. 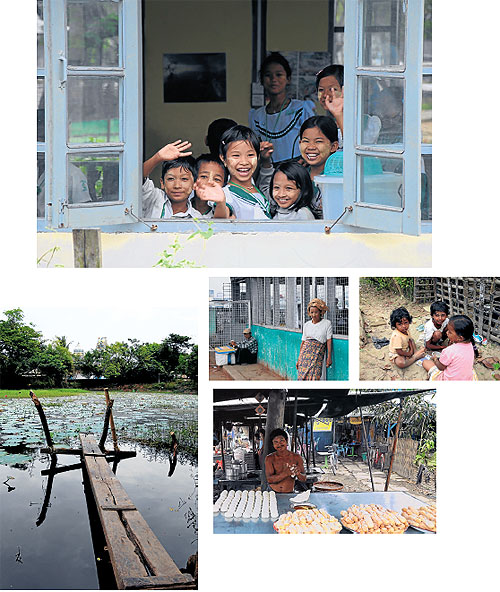 A short boat ride across the Yangon River ($2 return) lies the sleepy township of Dala, where people sitting on the earth floors of their shacks greet passing foreigners with wide smiles. The area has a number of primary schools and a single secondary facility, but is otherwise totally undeveloped — largely because it is still not linked to Yangon by bridge. Much of the action in Yangon is to be seen on the streets themselves. A wander around the city offers great opportunities to photograph the colour and commotion, particularly at sunrise and sunset when the fruit markets and colonial architecture take on new tones. Grab a plastic stool at a street cafe, sip on a milk tea and watch the world go by.

- There are no ATMs in Burma. It's hard to believe, but travellers who land at Yangon airport are expect to come armed with wads of crisp dollars or euros. The US currency is more widely welcomed throughout the country, and only notes of perfect quality (no rubber stamps, marking or writing) are acceptable. Officially, travellers must change all their money on arrival, but nowadays many hotels offer foreign-exchange facilities. For a better rate, try travel agents or money-changers on the street, but be discreet since this practice is still technically illegal.

- Only locally produced sim cards work within Burma. The best access to the phone network is through a service at the airport that loans out sims for $2 a day, and phones for another $2. Buying a sim currently costs around $600 (that price is predicted to drop by half in 2012).

Internet access is also limited. Connections are starting to emerge around Yangon in hotel lobbies and some cafes, but can't be relied upon as web access is heavily regulated, and is slow at the best of times. At the time of writing, Facebook and Gmail were accessible from Yangon.

- Although Burmese immigration officials are once again granting visas to tourists on arrival, this facility should not be relied upon. It's best to apply for a visa before you travel. The Burmese embassy in Bangkok is at 132 North Sathon Road (BTS Surasak).