Our capital has become the second most expensive place to live in Southeast Asia after Singapore, according to a Worldwide Cost of Living survey conducted by the Economist Intelligence Unit (EIU). 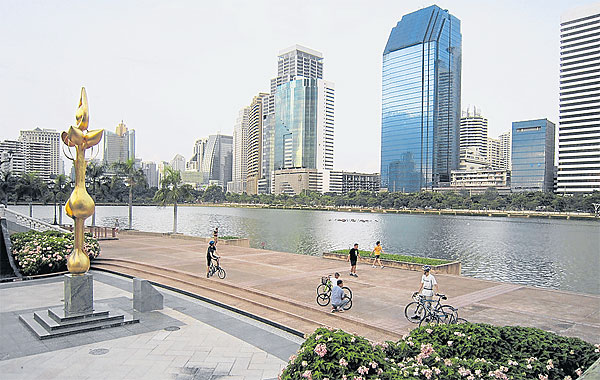 Is the cost of living in Bangkok as high as its skyline? Results of a recent survey imply that that is indeed the case.

It found that Bangkok has moved up three places in the rankings from 66th position six months ago and 12 months ago to 63rd position currently.

"The index has moved up in the last year, probably because consumer prices have moved up more quickly in Bangkok," said EUI chief analyst Jon Copestake.

Another reason for the apparent increase in the cost of living here, Copestake said, was the strengthening of the value of the baht in relation to the US dollar.

"The ranking has not moved much, though, because many cities around Bangkok have also been moving upwards in the ranking," he noted.

It found that the 10 most expensive cities out of 131 places surveyed were Zurich, Tokyo, Geneva, Osaka/Kobe, Oslo, Paris, Sydney, Melbourne, Singapore and Frankfurt.

The contest is called "Thailand at 5cm", the idea being to encourage visitors to the site to share photos taken around the Kingdom at a height of five centimetres above the ground. Photos snapped from this level give a novel perspective on the beauty of Thailand, explained the company's general manager, Jackie Wang.

The firm will post a souvenir to the home address of anyone who uploads a photo. An overall winner will be chosen each week based on users' votes; he or she will receive a voucher for use in the InterContinental Hotels group.

Emirates recently introduced a wi-fi service on all 11 of its Airbus A380 aircraft.

Passengers on board Airbus A380s on some long-haul flights, such as Dubai to Paris, can use their wi-fi enabled devices, including smartphones, laptops and iPads, to surf the internet. From mid-2012 all new Emirates A380s will be equipped with a full range of wi-fi, mobile phone and mobile data services.

Lufthansa has served meals prepared at Bangkok's St Regis Hotel to its first-class and business-class passengers.

As part of the airline's "star chefs" programme, Leonardo Concezzi, the award-winning executive chef at the St Regis, will be creating premium menus for passengers on board the airline's daily Bangkok-Frankfurt and Singapore-Frankfurt flights. He began the assignment on March 2 and so far has been offering a choice of Italian, Mediterranean and Asian dishes to passengers. The programme will run for the next two years.

The Sofitel Bangkok Silom will be renamed the Pullman Bangkok Hotel G in April.

The place is being given a trendier image in line with its rebranding as a lifestyle hotel. As part of the renovation scheme, the hotel has launched a Graffiti Competition open to teams of three people, below the age of 35. Each team is being asked to submit a drawing or sketch containing the letter "G" and well as examples of previous graffiti-style work its members have done. The deadline for receipt of entries is Thursday.

Aloft Bangkok on Sukhumvit Soi 11 has installed "Touch Room" technology in selected rooms in the hotel. Upon check in, guests are issued with a mobile device which doubles as a room key and can also be used to control lights and all electronic devices in the room.

Called Fingi, the hand-held device with a touch-screen interface functions as a phone and a wireless hotspot and can also be used to access hotel services such as booking a table at in-house restaurants and ordering room service. The hotel also provides iPads for guests to use in the lobby, lounge and bar.

The Even will focus on a "holistic wellness travel experience", according to the group's CEO, Richard Solomons.

The company plans to open the first Even Hotel early in 2013 and hopes to complete 100 such facilities over the next five years.

If you have news or comments to share, send them to karnjanak@bangkokpost.co.th.