Up close and personal
Travel

Driving to Vietnam on your own may sound a bit crazy, risky and time consuming. But it is a great way to learn about our neighbouring country up close and personal. Today, with more road links and less travel restrictions, it has become much easier to drive there from Thailand. 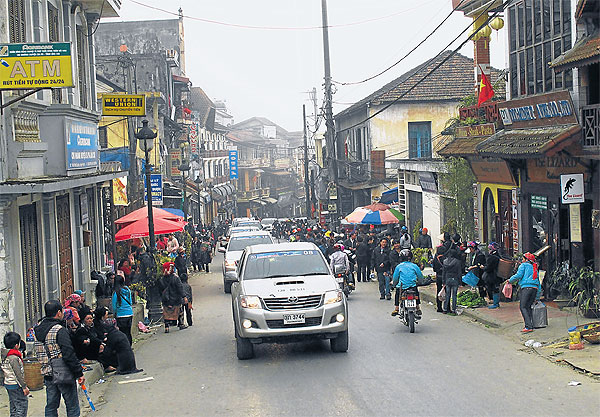 Toyota Motor Thailand recently organised a road trip to prove the efficiency of its new pickup truck, the Hilux Vigo Champ, its versatility and ability to navigate rugged terrain in Laos, chaotic traffic in Hanoi and steep mountain roads in Lao Cai province of Vietnam.

I drove from Nakhon Phanom province in northeast Thailand, crossed the Friendship Bridge, which spans the Mekong River via Highway 13, 1E, and 8 of Laos and entered Vietnam via the Cau Treo border check point. Then, I slowly made my way via Ha Tinh, Vinh, Halong and Hanoi to the remote mountain area of Sapa _ a distance of approximately 1,500km.

Navigating through Laos proved a piece of cake but entering Vietnam it was another story.

If you thought nowhere could it be tougher than driving through Bangkok's rush hours, think twice. Try driving a few hours in Vietnam, even a few minutes in Hanoi, particularly during rush hour, and you will find yourself in the middle of a rioting traffic.

The blare of horns and exhaust fumes fill the air, and the problem is aggravated by the presence of hundreds of motorcycles on the road no matter what time of day. Taxis and big buses promptly try to get in front of you if you spare them any space.

That is the way of life in Vietnam. At first you feel frustrated hearing uninterrupted honking of horns, but after a few days you gradually learn their driving style and start blowing you car's horn like crazy, as well.

Anyway, the rest of the trip was worthwhile. During the course of the journey I saw the people's lifestyle gradually change according to culture and landscape, from easy and dusty roads cutting through lush jungles of Laos, and vast rice paddies in central Vietnam to busy and hectic Hanoi and misty mountains of Sapa on Vietnam's border with China. 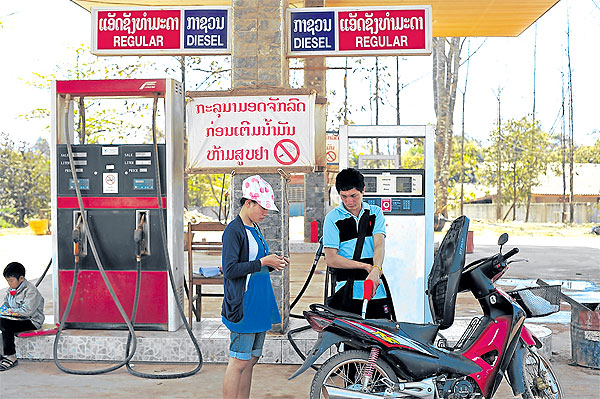 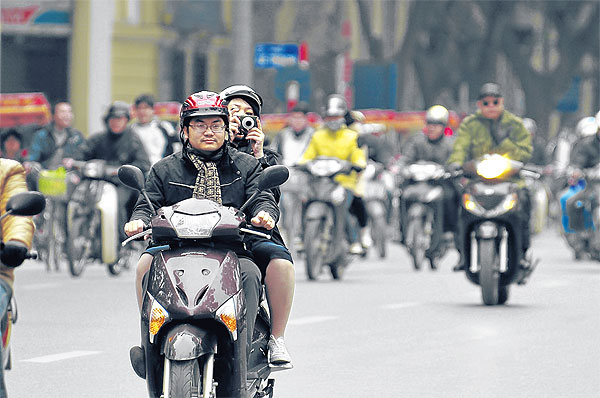 Vietnam has millions of motorcycles and Hanoi, the capital city, is one of the busiest places on Earth. Among chaos on the road, all Vietnamese motorists know when they can go and when not. And that is a thing a foreigner cannot understand in a short time. It is said that if you want to cross the road in Vietnam, just do it and the car will avoid you. 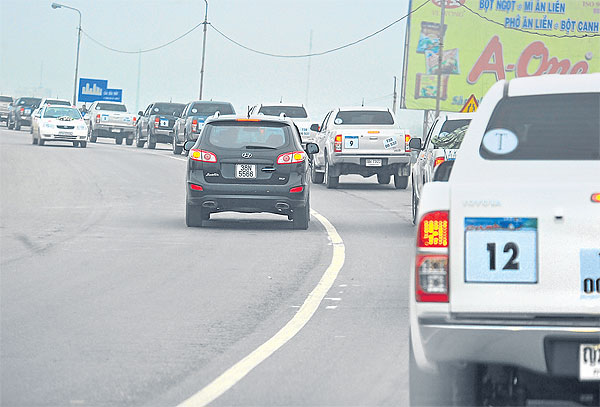 Driving in Vietnam is very different from Thailand and other countries. Regardless of the traffic conditions or regulations, Vietnamese motorists are always on the look to overtake and get in front of you. They blow their car horns at all times as if to indicate to other cars and passengers that ‘I am here’. 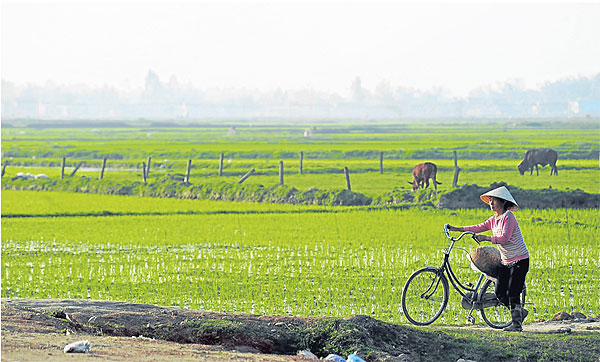 Ha Tinh in central Vietnam is a huge plain full of rice paddies. Vietnam is a major rice exporter and the area around here produces four rice crops a year. 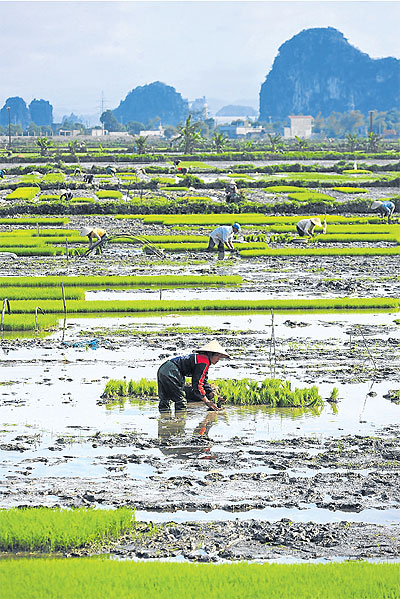 Farmers busy growing rice in Ninh Binh, which is famed for its landscape of limestone mountains that overlook stunning green paddies along the Ngo Dong River. The area called Tam Coc is known among travellers as ‘Ha Long Bay on Rice Paddies’. 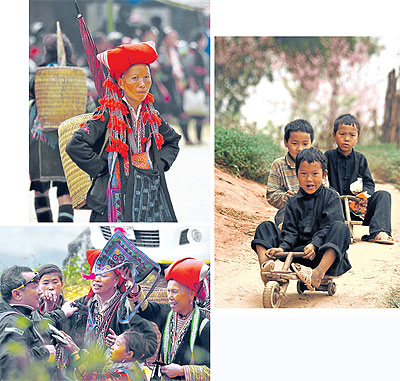 Sapa has numerous minority groups. Most of them are Hmong and Dao. In town, hilltribe children occupy the square or can be seen playing around the park. As they make a living selling souvenirs to tourists, most of them can speak good English. Anyway, be careful, if they start a conversation and you show some intention to buy, you will get into trouble as seen in this picture. 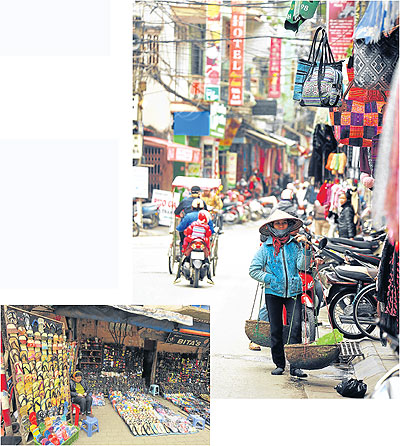 The Old Quarter of Hanoi is a vivid district tourists love to roam around. The area is full of coffee shops and others selling art, clothes, handicrafts and various merchandise. It is a good place to practice your bargaining skills. 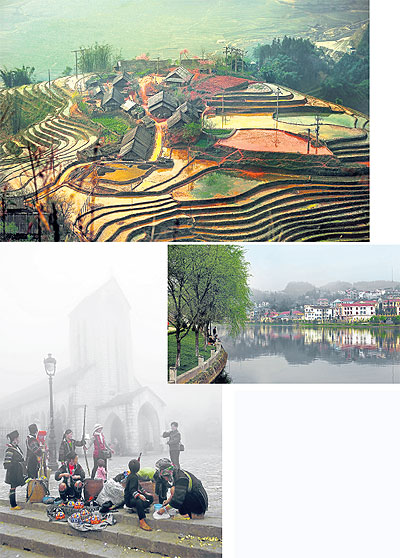 If you want to see the cool side of Vietnam, Sapa is probably one of the best places. Situated at the attitude of about 1,600 metres above sea level in Vietnam’s remote northwest mountains, Sapa is a famous tourist town with moderate climate, exotic mountain scenery and cultural diversity. Its surrounding region is home to many hill tribes, rice terraces, lush vegetation and Fansipan, the highest peak in Vietnam. 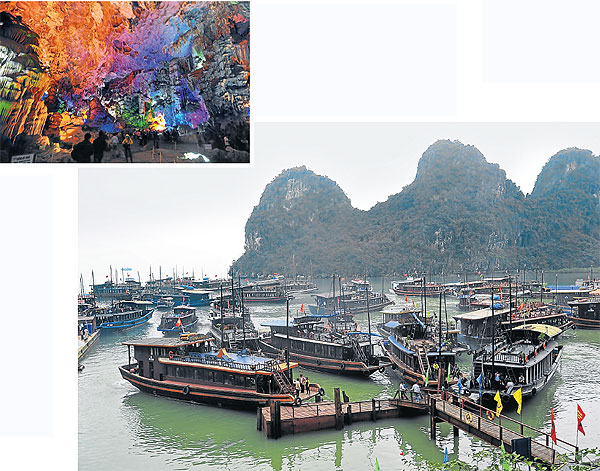 Traffic in Vietnam is always chaotic, not only on the road but also in the sea. At the pier where you embark for Thien Cung Island, numerous junks pack the bay waiting for passengers who come to visit the cave there. When their passengers come back, they all rush to the tiny pier at the same time. 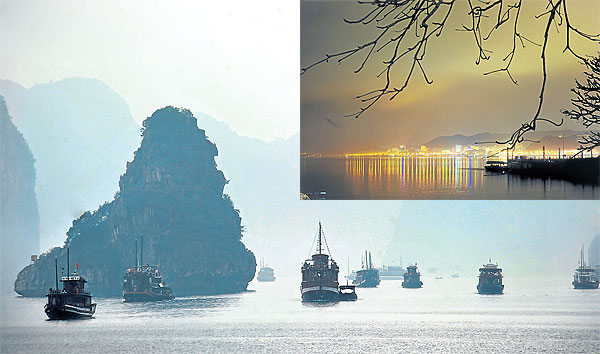 Halong town aglow at night. After Halong Bay got on Unesco’s World Heritage List, the town, once small, has grown rapidly. Everyday hundreds of junks full of tourists ply up and down the bay, which comprises thousands of limestone karsts and isles of various sizes and shapes. 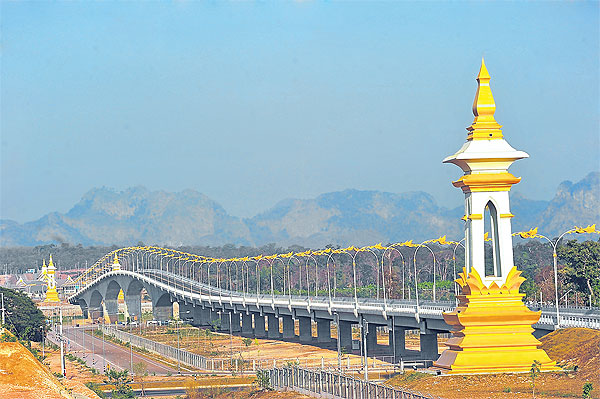 Officially opened late last year, the third Thai-Lao Friendship Bridge spans the Mekong River linking the provinces of Nakhon Phanom in Thailand with Khammouan in Laos. The bridge is part of Asian Highway 15 that allows motorist from Thailand to reach Vietnam in a day. Moreover, it is part of Asian Development Bank’s East-West corridor project that envisages a road link from Myanmar passing through Thailand and Laos to Vietnam’s central region. 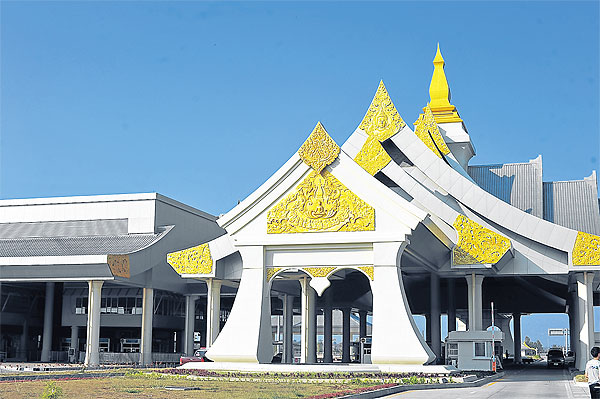 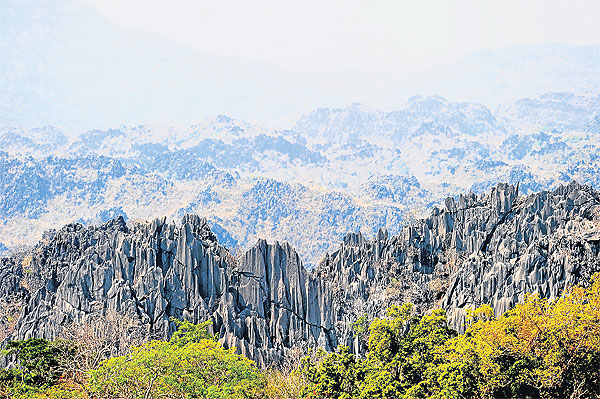 Crossing the Friendship Bridge from Nakhon Phanom, the road links with Highway 13 in Laos, which leads to Highway 8. On the way you will notice a very unusual landscape, a stone forest believed to shelter holy spirits. Laotian people call it ‘The Devil Valley’. The Turtle Tower stands on a small island near the centre of Hoan Kiem lake or ‘‘Lake of the Restored Sword’’, in the historical centre of Hanoi. According to legend, Emperor Le Loi handed a magic sword, which brought him victory in his revolt against the Chinese Ming Dynasty, back to the Golden Turtle God in the lake. Recently a large soft-shell turtle, was sighted in the lake. 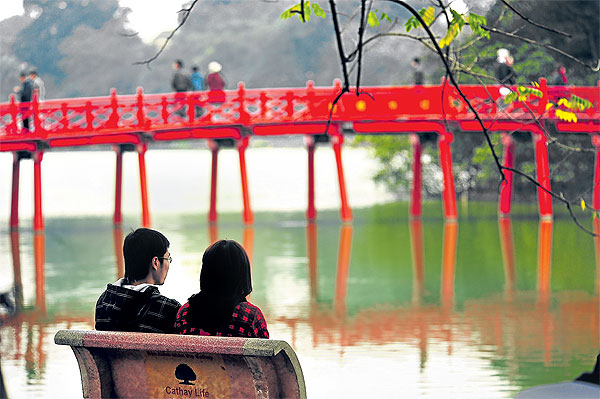 Couples sit before the bridge across the Hoan Kiem lake, connecting Ngoc Son Temple with the lakeside. Though situated in the heart of Hanoi, the area around the lake is quite charming. 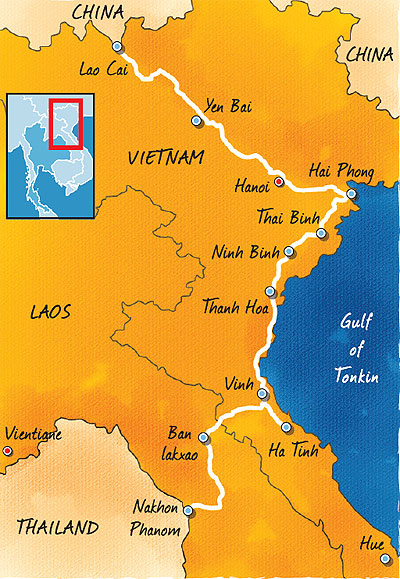 Vietnam need to register with authorities and obtain a temporary number plate.

Due to a maze of regulations governing tourist traffic, it is advisable for people travelling in groups to hire the services of a tour operator.