A warning has been issued by the Royal Thai Navy urging tourists not to visit or go swimming around Koh Rin and several nearby islands in Chon Buri because the area is regularly used by naval personnel for live firing practice. 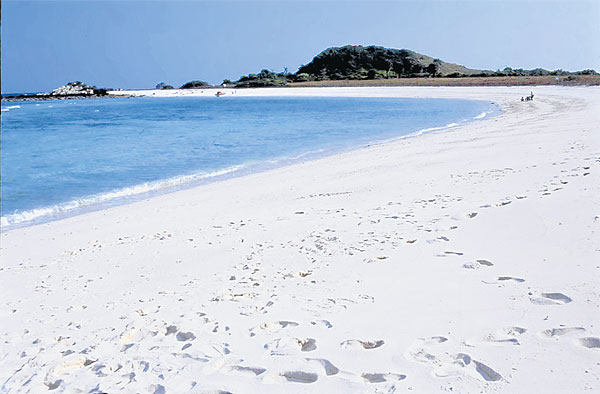 This attractive beach on the eastern side of Koh Rin is off-limits to civilians.

Koh Rin is a small uninhabited island in Sattahip district, about 21km west of the Pattaya shoreline. Attracted by the island's white sandy beaches and the schools of fish which can been seen in its vicinity, some tour operators have been organising day trips to Koh Rin and snorkelling/scuba-diving expeditions to the nearby islets of Koh Man Vichai, Koh Klueng Badan, Koh Hu Chang, Koh Leum, Koh Leum Noi, Hin Tonmai and Hin Khao.

Not only are these islands used for live firing practice, they are also reserved for the sole use of the Royal Thai Navy, according to Lt-Cmdr Boonrux Trongyongsaid, head of its Public Relations Department.

"There might be some unexploded ordnance scattered around the island so tourists who spend time in the area might be risking their lives," the officer said.

Apparently, a navy patrol recently encountered some tourists sun-bathing on a Koh Rin beach. "We were shocked," Lt-Cmdr Boonrux said. "The blame rests with a group of irresponsible tour operators."

Although no injuries or fatalities have been reported in the area, he said the navy is strongly advising civilians to stay away from Koh Rin and adjacent isles for their own safety. "These islands are not a tourist destination," he insisted.

Singapore's Changi Airport is to get a new terminal to enable it to handle 16 million extra passengers annually. Some 46.5 million people currently pass through the airport every year.

Dubbed Terminal 4, the new facility will be built on the site of the present budget terminal which serves passengers of Berjaya Air, Cebu Pacific, Firefly, South East Asian Airlines and Tiger Airways. The budget terminal will be demolished and all the airlines presently using it will move their operations to Changi's Terminal 2 on September 25.

The ambitious scheme includes the construction of a new international terminal to handle 20 million passengers a year, an automatic baggage-handling system, additional roads, a three-storey parking building and an airport hotel.

The present terminal, which can handle 11 million passengers a year, will be used for domestic flights once the new international terminal is completed some time next year.

"Runway excursions", jargon to describe an aircraft straying off a runway during a landing or take-off, were the most common type of accident in 2011, according to the International Air Transport Association (IATA).

They accounted for 18% of the 92 accidents involving aircraft (all types, both Eastern and Western built) reported in 2011, down from 94 in 2010. The percentage of runway excursions was three points lower than the figure for 2010.

Most of the accidents _ 88% _ reported last year occurred during landings. Unstable approaches _ situations where the aircraft is too fast, above the glide slope, or touches down beyond the desired touchdown point _ and contaminated runways are among the most common contributing factors to runway excursions on landing.

Ground damage was another concern, accounting for 16% of accidents in 2011 _ an increase from 11% in 2010. These accidents include events such as damage resulting from ground handling operations and collisions during taxi-ing.

One of the solutions that industry insider have come up with is more efficient sharing of information. IATA worked with the International Civil Aviation Organisation, the US Department of Transportation and the European Commission to create the Global Safety Information Exchange which includes the maintenance of databases on ground damage and flight data.

IATA has also announced that the 2011 global accident rate was one "hull loss" for every 2.7 million flights of Western-built jets compared to one accident for 1.6 million flights in 2010. A hull loss is the term for an accident in which the aircraft is destroyed or substantially damaged and not subsequently repaired for whatever reason, including a financial decision by its owner.

"The ultimate goal of zero accidents keeps everyone involved in aviation focused on building an ever safer industry," said IATA CEO Tony Tyler.

Bangkok Airways will launch a non-stop daily flight between Koh Samui and Kuala Lumpur on March 31, using a new Airbus A319 with 138 seats. The flight will depart Koh Samui at 5:55pm and the return flight will be at 8:20am. The flying time will be one and a half hours.

In addition, the number of flights the airline operates between Koh Samui and Hong Kong will increase to 10 flights a week in response to increasing demand.

To mark its 10th anniversary, Cenvaree Spa, part of the Centara Hotels and Resorts group, has announced that it will donate 3% of its income in March to charity.

It has also produced a limited-edition spa gift set called Shared Smile to mark the occasion. All proceeds from the sale of these will go to the Rangsit Babies' Home and Sotsuksa Prachinburi School.

Employees of Swissotel Nai Lert Park Bangkok have planted mangrove trees along a stretch of coastline in Samut Songkhram province which is part of the Klong Khon Mangrove Conservation Centre.

The goal is to protect the shoreline from erosion and provide more "nursery areas" to boost the population of various marine creatures. The hotel also donated 700,000 baht, proceeds from the Silver Jubilee Flower Show it organised last year, to the centre to support its ongoing work.

The 22-storey hotel has 606 rooms, 222 of which have connecting doors to facilitate family members. Each room is equipped with a 32-inch LCD TV and internet access. The hotel has two in-house restaurants.

If you have any comments or news items to share, please send them to