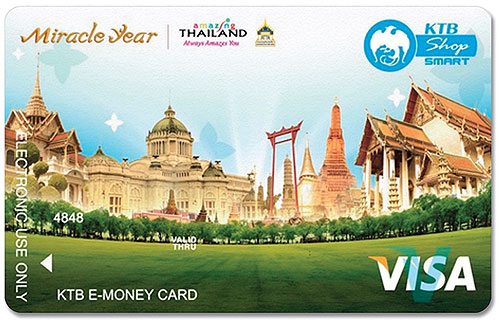 The aim is to promote the Miracle Thailand Year campaign and to offer more convenient way of spending among visitors, said TAT Governor Suraphon Svetasreni.

The card holder does not require to have a passbook with Krung Thai Bank. There is no annual fee, he said, adding that the debit card can also boost spending because visitors who are afraid of credit card fraud have an alternative of safety payment.

The Miracle Thailand card is offered at all branches of Krung Thai Bank, including its currency exchange booths and the booth of the Association of Thai Travel Agents at Suvarnabhumi Airport.

The price is 100 baht, which includes a package of Krungthai Panich Insurance covering seven-day personal accident insurance for up to 10,000 baht for outpatient treatment, a maximum of 500,000 baht for inpatient treatment, and life insurance of one million baht. The card holder can top up the amount in the debit card to the maximum value of 30,000 baht at any branch of Krung Thai Bank and its nationwide currency exchange booths.

According to Krung Thai Bank, the card holder can also buy goods or withdraw cash from ATMs any where in Thailand without any charges.

Laos will have a new international airport in the southern part of the country.

Called Attapeu International Airport, the project will cost $45 million (1.4 billion baht) and will be constructed by the Vietnamese-based Hoang Anh Gia Lai Group.

Located in Attapeu province, on the border town between Laos and Vietnam, the Laos government expects the new airport will attract new business and investment as well as promote tourism.

The airport will be completed in June next year.

At present, Laos has two international airports _ one in Vientiane and the other in Luang Prabang.

- Thai AirAsia will launch the first Chiang Mai-Macau flight on May 22.

It will fly via Airbus A320s with 180 seats and will depart Chiang Mai at 4:15pm, while the return flight from Macau will be at 8:45pm. The flying time is two hours and forty minutes.

According to Thai AirAsia CEO Tassapon Bijleveld, China will be its major target this year. With the new route, two major tourism destinations in China and Thailand will be easily connected, he said. Travellers from Chiang Mai can also connect to Hong Kong with an hour ferry cruise.

Last year the airline announced Chiang Mai as one of its hub and offers eight daily flights to Bangkok, two to Phuket, one to Hat Yai plus three weekly flights to Ubon Ratchathani.

- Nok Air has improved its service after returning to Don Mueang Airport.

The airline launched a free wi-fi service for passengers before boarding and a 'Yellow Line' service, which another check-in counter will open if passenger queues exceed the yellow line.

In addition, it also introduced a new zone for small children.

The service will be a seasonal scheduled service with four flights a week operating from July 1, to the end of September, according to Dragonair CEO Patrick Yeung said.

The airline will also introduce a three-flight a week route between Hong Kong and Jeju in South Korea on May 1.

"Jeju and Chiang Mai have long been popular with tourists, and with our new direct non-stop flights we will offer more choice and convenience for travellers to both destinations," he said.

nHilton has joined hand with Magnolia Finest Corporation to introduce its first luxury brand in Southeast Asia in Bangkok.

Called the Waldorf Astoria Bangkok, the hotel will be located on Ratchadamri Road between the BTS Chitlom and BTS Ratchadamri stations.

The 60-storey tower will house 170 rooms including 34 suites with a minimum size of 50 square metre, three restaurants, two bars and lounge, two ballrooms, nine meeting rooms, a fitness centre and spa and an outdoor pool.

"Bangkok is a truly international and sophisticated city and we are pleased to be working with an established partner like Magnolia Finest in showcasing our famous luxury brand for the first time in Southeast Asia, in this major gateway city," said Hilton senior vice-president Andrew Clough.

The Waldorf Astoria Bangkok is scheduled to open in 2015.

It will open Hilton Sukhumvit Bangkok and DoubleTree by Hilton in Sukhumvit next year.

- Centara Hotels & Resorts will open its second property in the Maldives later this year.

Called Centara Ras Fushi Resort & Spa, the hotel will be located on the island of Giraavaru, about 15 minutes ride by speedboat from Male Atoll.

Centara has invested about $54 million (1.7 billion baht) for the property covering beach villas and over-water villas scattered around the island.

Other facilities include restaurants and bar, a beachfront swimming pool, a fitness centre, Spa Cenvaree, a beauty salon, Padi diving school which can take visitors to dive in Giraavaru Cave, Lion Head and Kuda Haa within 20 minutes distance.