Monk ordination on elephant-back in Surin

Ban Ta Klang in Surin province is Thailand's largest elephant village and where elephant raising has been passed down through generations for centuries. People here speak the Kui language and have well-preserved their ancient culture and traditions, such as the worshipping of ancestors before capturing wild elephants and the wedding and monk ordination procession on elephant-back. 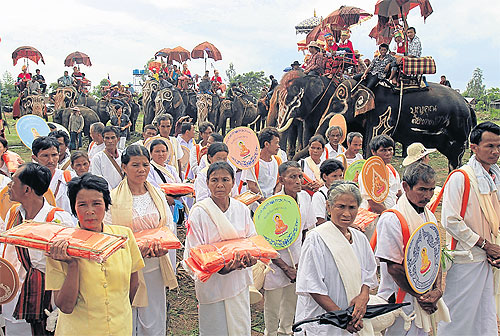 The ordination procession on elephant-back is over 200 years old. The Kui people usually arrange a mass ordination ceremony for their sons when they turn 20 and believe the ordination will bring fame and good fortune if the monks-to-be ride on the backs of elephants while joined by at least 1,000 people in a grand procession. On the important day, novices- or monks-to-be will be taken by the procession of elephants to Wang Thalu stream (where the Chee and Moon rivers meet) and then ordained on an island called Don Buad. This ceremony is held on the three days of the full moon (13th, 14th and 15th) in the sixth month of each year so that new monks practise dharma during the Buddhist Lent.

This year, the ordination procession on elephant-back will take place at Elephant Village in Tha Tum district of Surin province from May 3 to 5, according to Boonyanuch Wannaying, director of the TAT's Surin office.

The objectives are to honour Their Majesties the King and Queen, conserve local culture and traditions, as well as promote tourism in Surin province. Activities will include the ordination ceremony, the chanting and grand parade of more than 100 elephants, the monks-to-be and the local villagers, as well as entertainment at night.

Thai men above the age of 20 who are interested in entering monkhood and would like to be a part of the annual ceremony can apply to the Provincial Administration Organisation or the Elephant Village from now until May 2. 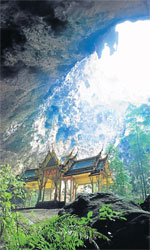 Phraya Nakhon Cave in Prachuap Khiri Khan province is named after a former ruler of Nakhon Si Thammarat who discovered it during the reign of King Rama I. Its highlight is a four-gabled roofed pavilion, Kuha Kareuhasana, built to mark the visit of King Rama V on June 20, 1890. Kings Rama VII and Rama IX have also visited the cave. PHOTO: PATSINEE KRANLERT

Summer in Prachuap Khiri Khan and winter in Korat

The TAT's Prachuap Khiri Khan and Nakhon Ratchasima offices are promoting interregional tourism under the "Travel in Prachuap in Summer, Stay Overnight in Korat in Winter" campaign.

Prachuap Khiri Khan is the city of gold, coconuts, pineapples, beaches, mountains and caves, and is the gateway to the South. The 200-km stretch of sandy beaches from Hua Hin to Bang Saphan Noi district is stunningly beautiful. Visitors can stay in their choice of accommodation, ranging from luxury and boutique hotels to guest houses. Here, guests can enjoy various activities such as diving, snorkelling and cruising, as well as savour delicious fresh seafood. Visitors can also shop at the floating market, go for a jungle trek or make merit and pay their respects at Buddhist temples. Hua Hin is also the land of brave people, who fought the Japanese invaders in 1941.

Nakhon Ratchasima is the gateway to the Northwest. Highway No.1016 in Pak Chong district and Highway No.3052 in Wang Nam Khieo are also called the "Way of Love". Visitors can enjoy the beautiful scenic views, fun activities, adventure sports, grape harvesting, bird-watching and wildlife, swimming and golf. The 90-km route is full of accommodation choices ranging from small resorts to luxury and boutique hotels, as well as restaurants and food stalls offering a wide selection of dishes, from grilled chicken and som tam (papaya salad) to steak and pizza. Besides, there are a lot of stunning waterfalls, abundant forests and nature trails at Khao Yai National Park.

Pinnart Charoenpol, director of the TAT's Prachuap Khiri Khan office, and Suharit Charnwanagkoon, director of the TAT's Nakhon Ratchasima office, said that both provinces are ready to welcome tourists, and invite them to come and enjoy the sea breeze in Prachuap Khiri Khan in the summer months and cherish the cool weather and gaze at the stars in Nakhon Ratchasima in wintertime. The offices are also giving away two guidebooks to those interested. 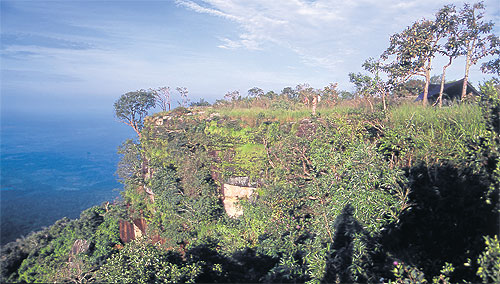 Khao Yai National Park, which sprawls over parts of Nakhon Ratchasima, was declared Thailand’s first national park in 1962 and is still the most popular.