A Head of the Times
Travel

A Head of the Times

There's one place in Thailand where you have to set your watch one hour ahead, walk around bare foot, refrain from reading and hearing about any news, and your requests are fulfilled by the butler called Friday. 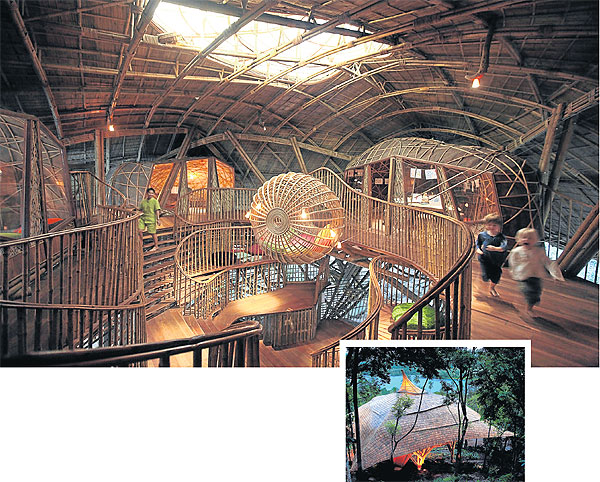 Reflecting the shape of a gigantic manta-ray hovering over among the tree tops, The Den serves as a playground packed with activities for children.

That may make you feel like a modern-day Robinson Crusoe, albeit one who doesn't have to think about surviving on a remote island and instead go along with a slow life.

So when it's 6am in Bangkok, the time at Soneva Kiri on Koh Kut, Trat is 7am and the guests staying there don't feel like they have to wake up early to greet the sun. 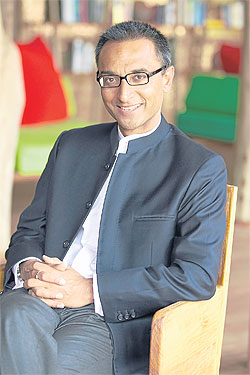 Sonu Shivdasani, chairman and CEO of The Soneva Group.

"The time being one hour ahead is an essential part of the Soneva philosophy," said the resort owner, Sonu Shivdasani. "On a typical day the sun rises at 6am and it sets at 6pm. But you wouldn't want it to be dark at 6:30pm because you feel that you haven't had your full day. Here it gets dark at a quarter to 8 and that's so much nicer, like you get an extra hour."

He added that at midday the sun is very strong, too strong for a lot of his clients but putting the clock one hour ahead, they can get out in the sun at noon Koh Kut time, which is 11am Bangkok time.

When first visiting Koh Kut, situated on the southeast of the Gulf of Thailand, he was surprised that such a beautiful place is so close to Bangkok, compared to Koh Samui and Phuket. The virtually untouched island boasts beautiful rainforests, natural mangrove swamplands, and waterfalls that make a nice backdrop for a holiday destination. And so he decided to build the third Soneva property, after Soneva Fushi and Soneva Gili in the Maldives.

"I was taken away by the quality of the water," he said. "It is very much underdeveloped, perhaps like Phuket was like 100 years ago. And depending on the transfer infrastructure, Koh Kut could become one of Thailand's best beach spots. You don't get beaches like this in Phuket or Samui."

The resort developer described the location as "remote but accessible", and to achieve the latter, a private airstrip was constructed on a nearby island where an eight-seat Cessna Grand Caravan flies in and out every day. The short flight from Suvarnabhumi Airport is followed by a five-minute speedboat ride to get to Koh Kut. So instead of more than three hours, the travel time from Bangkok is only one hour.

Constructing resorts on remote locations comes with a risk and he joked that back in the '90s, if he were at his present age (46) he wouldn't have built Soneva Fushi.

The beauty of the Maldives enticed him to buy an island, with one caveat from the Maldivian government; on the basis of granting permission for him to build a home, he must build a resort. Opened in 1995, the flagship Soneva Fushi quickly received iconic status amongst the discerning travel community and industry endorsements soon followed with a host of awards including in 2000, The Best of the Best by the readers of Conde Nast Traveller UK. 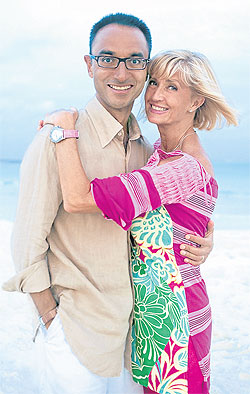 It took more than five years in the planning and construction of Soneva Kiri, which was opened in 2009 to deliver what Sonu calls "intelligent luxury".

"We're challenging and questioning what is truly luxury, and the post-Renaissance definition of luxury was different to what people cherish today. In the past wealthy people and nobility lived on big estates. In the morning they would go horse-riding, later on maybe fishing, and they had much leisure time. They would also eat food cooked with fish freshly coming from the lake or sea and vegetables freshly plucked from the garden," he said. "For them luxury was dressing up wearing white tailcoat, going in to town to the Cafe Royal, listening to a four-piece band, and dancing the night away. Brocaded furniture, marble floor, big chandelier,champagne and caviar _ that was all luxury because it was a change to what they were used to in the countryside.''

It's the other way round for intelligent luxury as 21st-century city dwellers want to find their way back to nature. Sonu is obviously one of them and if he's not at home in the Maldives, he's travelling and staying in ''boxes'' like many other urbanites.

''Today, city people are living in boxes and they go by car boxes to work in office boxes, and with the pollution, you wouldn't want to stay outside,'' he said. ''Fresh air becomes a premium, and so at Soneva Kiri, there's the open-air bathroom, open-air cinema so you can watch a movie under the stars. The observatory further allows star-gazing. At Soneva Kiri, we try to offer all these things that make for intelligent luxury in the beautiful natural setting.''

Whenever Sonu is in the city, he finds himself having to take supplements because food like vegetables may not contain sufficient minerals like those grown in his organic garden in the Maldives. It also takes many days for it to come from the garden to the supermarket and into our fridge, and so city folks don't really get to eat fresh vegetable.

Providing fresh supplies for the kitchen, Soneva's organic herb and vegetable garden is one of the commitment to showcase its ''Slow Life'' philosophy. The acronym stands for Sustainable, Local, Organic, Wholesome, Learning, Inspiring, Fun and Experiences.

Don't be mistaken that this would mean eating only greens during your holiday, and the resort is famous for its chocolate room and ice cream parlour as much as its stunning architecture. 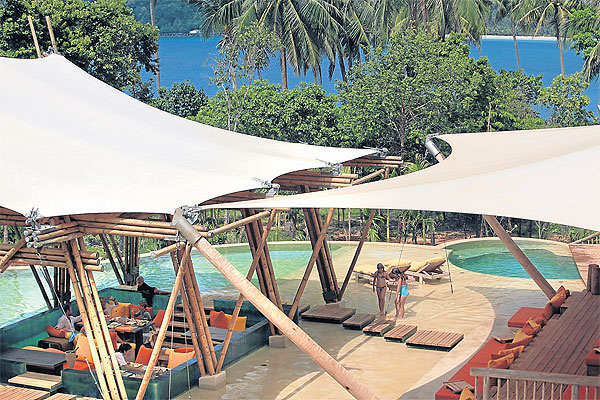 ''On my day off, I like to do architectural designs. So I was involved with a lot of the architecture, by doing a general layout, briefing on material and style of the roof and so on. And I would work closely with the architect and my wife, Eva. As our interior designer, she designs every piece of furniture,'' he said.

Former fashion designer and model, Eva Malmstrom Shivdasani recalled how her husband encouraged her to take on the challenge in creating and overseeing Soneva's interior design process.

''When we were doing Soneva Fushi, he said I could do it. I told him that I would do it only if he let me do exactly what I want to do, which was to make it ecological, like not using any rainforest wood for construction,'' she said.

Committed to Reduce-Reuse-Recycle, Eva found a big depot in Britain where pine poles ended up after serving as telephone poles. They became a key construction material in building Soneva Fushi. 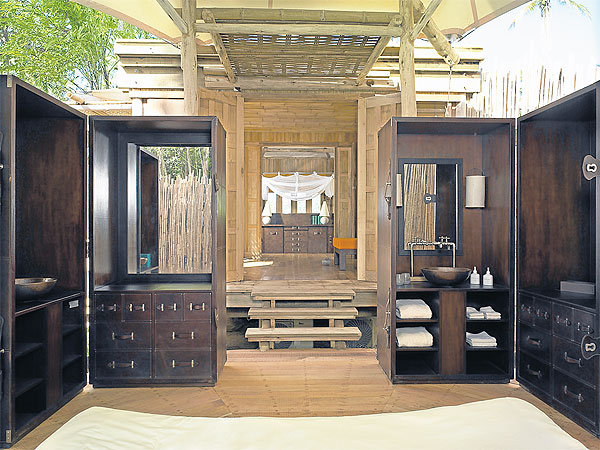 For the Soneva Kiri project, she chose to present the beauty of bamboo in its luxurious pool villas and magnificent architecture such as a bamboo bridge and an over-ground bamboo-framed structure.

Working for the first time with bamboo for the basic framework, Dutch architect Olav Bruin was challenged with the construction of The Den, using local bamboo found in the north of Trat province. The exterior reflects the shape of a gigantic manta-ray hovering over among the tree tops while the interior was designed to have four rooms set within a free-flowing auditorium.

Sonu and Eva were particularly involved with the interior design of the four rooms, the windows in the flooring to peek down to the forest floor below, and a drawbridge that leads up to a wave of stairs so that The Den would serve as a playground packed with activities for children.

The pool villas are where you can see how Eva had some fun herself in designing the furniture, from a travelling trunk at the foot of the bed which when opened, pops up a flat screen and an even bigger trunk in the outdoor bathroom serves as a cabinet. The trunks come from the Philippines and they're eco-friendly with the use of vegetable dye to give a classic colour.

Searching far and wide for eco-friendly materials as well as developing Soneva resorts doesn't count as hard work for the couple.

''We have actually been together for many past lives. In this life we have worked out our karma, and we're here not to work anything out but for pleasure,'' said Eva.

Soneva is an amalgam of the couple's names and likewise Evason, which is another brand that they founded under Six Senses, a resort and spa management and development company established in 1995.

The recent business acquisition of Six Senses by a US-based company means that the couple will focus solely on the development of the Soneva resorts and real estate assets.

Chairman and CEO of The Soneva Group, Sonu felt that running Six Senses was like handling three jobs but now he and his wife could dedicate themselves to improving their resorts.

''It's like how dots make up a pointillist painting. We focus on the details from the facilities to our services, and the overall experience is a combination of what we offer with a Soneva touch.''