Turkey's rich heritage has much more to offer than just Istanbul

For travellers Turkey is an endless wonder. The Eurasian country is blessed with a natural, historical and cultural heritage that would take more than one visit to even attempt a crack at its time honoured civilisation _ from the Romans to the Ottomans. 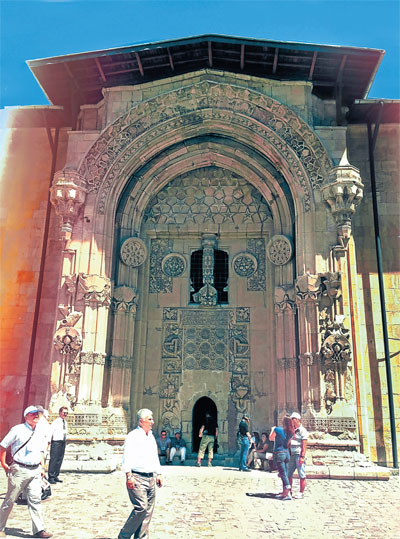 The Divrigi Great Mosque and Hospital.

It wouldn't be hasty to assume that Istanbul readily springs to mind as a compulsory destination to most of us. As true as that may be, and Istanbul is not to be missed, there's more to Turkey than Istanbul.

In the Central Anatolia region of Turkey, Sivas province hosts 17 districts, and its capital city is also conveniently called Sivas. The capital district is most populated, and acts as the city centre for nearby districts with a fully functioning airport, hotels and entertainment venues. Even though archaeological findings revealed that settlements of Sivas could be traced back to the Hittite period, Sivas came to prominence during the Roman period.

Sivas was also a part of the Silk Road and the Persian Royal Road.

Today, the province serves as a transportation, agricultural and industrial hub for the region, as well as a connecting portal to Iran and Iraq.

As one of the main cities of the Great Seljuk Empire, which lasted from the 11th to 14th centuries, right after the Crusaders and preceding the Mongols, Sivas still proudly represents Seljuk's magnificent arts and architectures.

The period is also noted for the monumental flourish of Persian higher education and artistic culture, which can still be witnessed through the remaining Seljuk buildings laid across the province. 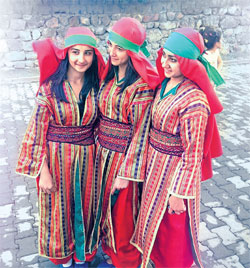 Seljuk architecture is unique in its love of stones, simplicity and quiet designs, as well as a prominent use of stalactite vaulting. As evident in many Anatolian Seljuk buildings, the doorways are where artistic mastery reigns, and are carefully crafted with high arts, housing Islamic calligraphy, which tells short histories of commissioning sultans, royal symbols, Seljuk's official emblem of double-headed eagles and complicated decorative items.

It might not be as elaborate as more famous Turkish landmarks such as the Hagia Sofia, but there's a beauty enveloping its subtle craftsmanship and modesty cohabiting with concentrated splendour in designated areas.

In Divrigi, a sleepy town two hours from Sivas city centre, there stands a Unesco world heritage site. Divrigi Great Mosque and Hospital made the Unesco list in 1985, and it was plain to see why.

Standing majestically on the Igimbat foothill, the Divrigi Great Mosque and Hospital, as well as nearby Divrigi Castle, loom over the quiet, spacious town, also noted for its iron ore, as if to protect the inhabitants from spiritual erosion. The mosque is still functional, and calls for prayers through loudspeakers.

This historical complex came under the Mengujekids, an Anatolian beylik under the ruling of the Seljuks. The mosque part was built in 1228, and commissioned by Ahmed Shah, the grandson of Mengujek Bey Sahinsah.

Its most unique feature lies in one of its three entrances, the Great Portal, which directly leads to an altar, facing Mecca and offering a path to God.

The three-dimensional stone carvings with flower motif are so staggering that a crick in the neck is a sure thing.

Adding to the awe inspiring effects, the detailed three dimensional stone carvings weren't added on to the portal. They were hand-carved on spot.

The two Arabic epigraphs recount the founder's and construction history. Also, the reliefs aren't symmetrical in order to artistically display Islamic philosophy, where harmony can exist in diversity.

As with Seljuk and Mengujek traditional architectures, the doorway is spectacular. Built by a lady, two of the notable reliefs portray a man and woman, the latter with braided hair to depict the sun and the moon _ the yin and yang of existence, as well as depicting gender equality in ancient times.

The portal's decorations are said to reflect the queen's femininity while symbolising her power. From the outside, you can clearly see a rectangular raised window behind a decorated column.

Melike Turan Melek would sit in a private chamber looking out from that one window while handing out candies to children and listening to the townfolks' complaints.

Inside the main hall, there's a pool in the centre, as well as a stage while sectioned cloisters look like smaller rooms on the left and right. Melike Turan Melek's hospital operated in the same fashion as the period's other medical centres.

This healing centre hosted visiting physicians, musicians, professors and surgeons. When a visiting doctor came around, there would be an announcement for villagers to queue up for a brief session. The medical services performed would be minor _ tending to wounds and light surgical treatments.

Dvrigi hospital also operated as a mental institution where psychological ailments were treated with music and water therapy. Those gripped by mental disorders would be interned in a room so they could be made to listen to themselves and rest while listening to music.

The Dvrigi Great Mosque and Hospital is in good condition despite some unfortunate graffiti on the stones. The world heritage site has not only stood the test of time and served as an epitome of Seljuk architecture, but also retold stories of how the Seljuks and Mengukejs lived, and how female empowerment bettered the lives of the subjects.

The province of Sivas is brimming with untapped destinations. Quite removed from the hustle and bustle of modern Istanbul and the official seriousness of Ankara, Sivas offers another side of Turkey as an integral piece of the country's long, fascinating history. 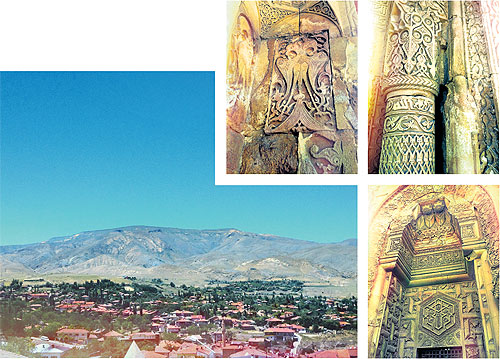 The Seljuk emblem is a double-headed eagle. 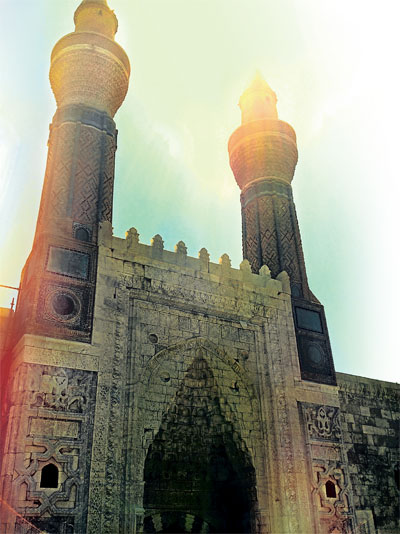 The Gok Madrasah soars to the sky with double minarets. True to Seljuk architecture, the marble doorway holds many artistic achievements from meticulously detailed reliefs to the a keystone that would collapse the entire gate if taken out. Epigraphs reveal that the Gok Madrasah was built in 1271 by Vizier Sahip Ata Fahreddin Ali to serve as a theological school. The building has two storeys, a courtyard and four patios. It became a museum in 1926, but it has been under reconstruction since 2006. The building is still under way with visible scaffolding. Once finished, the madrasah will serve as a Seljukian museum. 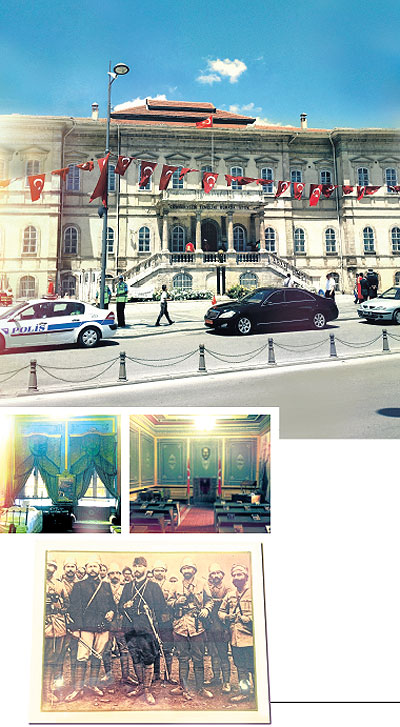 Although noted for its natural beauty and architectural significance, Sivas is the birthplace of modern Turkey. The Sivas Congress was held in this building, now dubbed the Ataturk Congress and Ethnography Museum, from Sept 4 to Sept 11, 1919. The founder of Turkey Republic who went on to become its first president, Mustafa Kemal Ataturk called for the assembly of the Turkish National Movement in Sivas to establish groundwork for the eventual separation from the Ottoman Empire in the Turkish War of Independence. Ataturk spent 108 days in Sivas, and essentially lived in this building. The three-storey complex was first a public school and then turned into a town hall in 1911. On the 1st floor, ethnographic relics are displayed, and on the 2nd floor, pictures and documentations of the War of Independence can be seen. You can see the beautifully decorated conference with pictures of statesmen and political leaders plastered to the seats where they sat and decided the future of Turkey. Ataturk’s personal bedroom and office are also on display. 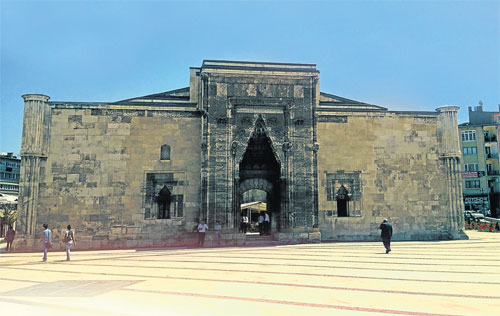 The Buruciye Madrasah in Sivas district is known for its arch gate and symmetric building plan, and once offered courses in physics, chemistry and astronomy. Today, there’s an open-air coffee shop inside. Beautiful madrasahs like this are scattered around Turkey. They once served as a centre for the community, and were as important as mosques and hospitals. Different madrasahs offer different curricula from theology, medicine, linguistic, astronomy to mathematics. These days, the term madrasah has been misused by the media, and often associated with Islamic extremist training centres when in fact many functioning madrasahs have no involvement in religion movements. 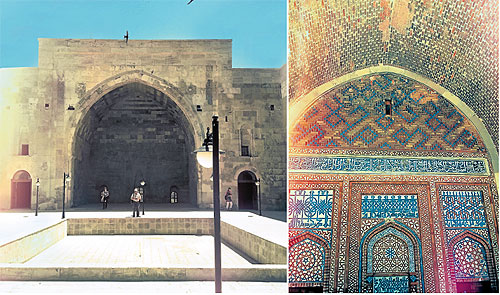 The Sifaiye Madrasah and Hospital was built in 1217 by Izzeddin Eykavus I. The sultan spent a lot of time in Sivas, so he decided to build a medical school and healing centre in the city. The arch gate entrance opens to an open courtyard. Sun and moon symbols can be clearly seen while embossed male and female head figures are also present. This medical centre devised music and faithhealing therapies for mentally disturbed patients. The southern patio became a mausoleum for the sultan and his family. The entrance is elaborately decorated by colourful mosaics. Above the sultan’s tomb, a stone was carved to look like a figure of a sitting monarch, watching over his loved ones. 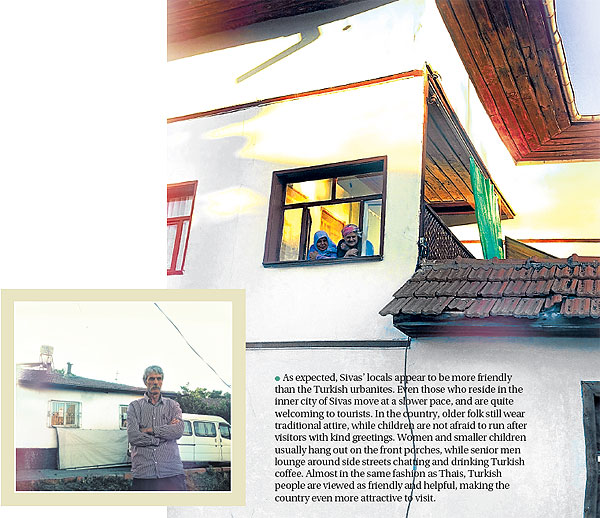 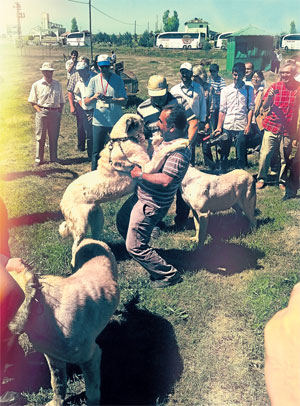 The Kangal dog is one of Turkey’s national treasures, and is the country’s national breed. The birthplace of this lovely breed is in the Kangal district of Sivas province, which is also where the Kangal Dog Research Centre is situated. The centre aims to preserve the breed in natural, spacious settings. Potential owners must receive official approval from state authorities before purchasing a pure bred Kangal. The price for a Kangal puppy starts at roughly 20,000 baht. Kangal dogs are bred to be livestock guardians. They’re known to fight off wolves and tigers to protect sheep and other livestock. Adult Kangals usually sport spiked collars to keep animal attackers from targeting their soft spots around the neck. Despite their strong build, Kangals are usually of gentle temperament. They are calm and even tempered in addition to their protective nature. Kangal dogs make good domestic pets as they are great with children, but they need large spaces to run and exercise. 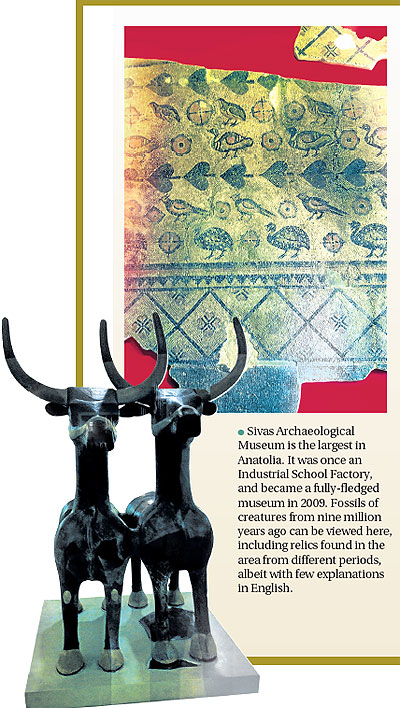 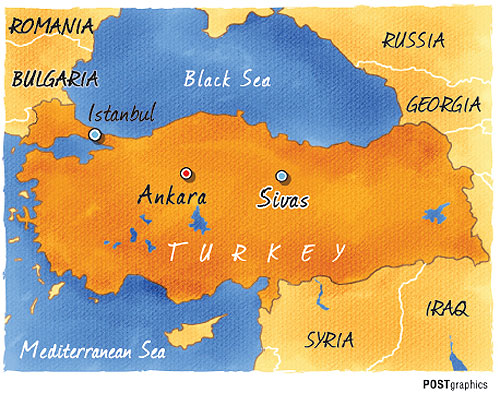 Sivas is located in Central Anatolia region. The province is around 880km from Istanbul, and it takes 11 hours to reach by car. It is connected by air from Istanbul and Ankara. There's a daily flight from Istanbul, and is an 80-minute flight. You can visit Ankara en route from Istanbul. From Ankara, Sivas is one hour by air and six hours by car. A high-speed train from Istanbul is expected to be implemented in the near future. From Sivas it takes an hour by road to Kangal and two hours to Dvrigi. Kangal is en route to Dvrigi, so you can stop by the small town to visit Kangal dogs or enjoy its famous thermal springs and doctor fish. The roads in Sivas province can be difficult to navigate due to its hilly nature, so it might be more convenient to contact local tour operators who can provide drivers. Daily direct flights are available from Bangkok to Istanbul.