Rain, shine or floods, the street procession and body piercing ritual in Takua Pa town in Phangnga province has become an integral part of the annual Vegetarian Food Festival, which traditionally begins on the first day of the ninth lunar month. This year it starts this coming Sunday and runs until Oct 23. 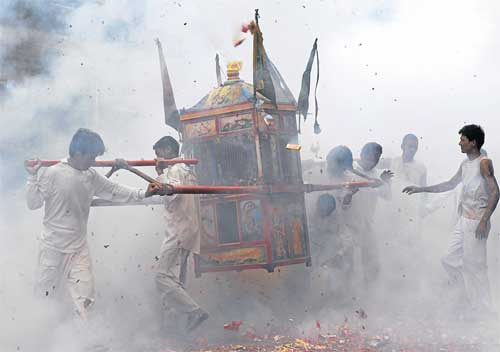 Firecrackers explode as devotees carry a palanquin bearing the image of a Chinese god during a street procession on Takua Pa Road.

The procession is much smaller compared to the more well-known edition in the old town of Phuket.However, Takua Pa continues to stick by the original form of the ritual in which devotees only wield weapons of ancient Chinese gods while the devotees in Phuket, in addition to those, also wield guns, swords or even motorcycles.

"Our ceremony is compact and we still follow our traditional beliefs," said Yupadee, an officer of the Takua Pa municipality office. "We organise the street procession on Si Takua Pa Road, also known as Cultural Street, lined on both sides by Sino-Portuguese shophouses. We recreate the old ambience the way our grandparents organised the ceremony a century ago." 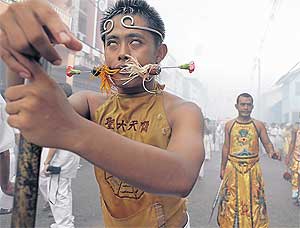 To purify himself, a devotee pierces his cheeks with sharp objects.

Starting on Sunday, every Chinese shrine in Takua Pa will put up a ko taeg pole, a long bamboo or wooden pole topped by a bamboo branch to mark the beginning of the festival. The next day local residents will wear white clothes and join a parade to encourage others to participate in the 10-day festival during which they only eat non-meat meals and pay respect to Chinese deities.

The body piercing ritual, which is a highlight for tourists, will take place on the afternoons of Oct 20-23. Unlike the event in old town Phuket where the piercing starts before the crack of dawn and the procession is held early morning, in Takua Pa the piercing begins simultaneously at local shrines late in the morning, followed by the procession about 2pm. The shrines are also included in the street procession.

In the morning, people go to shrines nearest their homes to pay respect to the gods. Children help by folding golden papers at home and at the shrines. These folded papers are used as offerings to the gods and later burnt to seek the blessing of their ancestors.

While devotees in self-induced trance stand ready at shrines for the cheek-piercing ritual, their family members lay out food on tables set on both sides of Takua Pa Road. The offerings are simple and include folded gold papers, fruits like oranges, pineapples and grapes, a pot of hot tea and small cups. 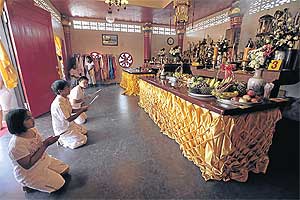 People joining the Vegetarian Food Festival abstain from meat and come to this shrine to pay respect to the gods.

The procession begins in the afternoon, starting with a steady beating of drums that can be heard from afar, followed by the sound of cymbals and non-stop explosion of firecrackers.

White fumes pervade the air. Children carry coloured flags of the festival, bearing the name of the shrine in the Chinese language at the beginning of the procession, followed by a palanquin bearing the statute or image of a god, devotees and followers.

The devotees, all male, wear only white pants and a long piece of cloth _ bright and colourful _ like an apron over their body. Their cheeks are pierced with sharp objects like skewers or long aluminium sticks. Some use other weapons such as an axe, double-headed axe or knife to slash various parts of their body _ backs, foreheads or tongues.

The sacred rite is associated with an old Chinese belief that it drives bad luck or sickness of the devotees away, as well as bless the communities they live in with good fortune.

During the procession, some devotees also stop in front of food tables lining the street to drink tea, bless family members and take fruits and pass them on to people waiting in the street.

Whenever the devotees pass a Chinese shrine, they gather in a circle to perform self-flagellation such as hitting their backs with axes, slashing their tongues with swords or committing other painful acts to purify their souls while locals light long lines of firecrackers and throw them to the street to please the gods. The setting off of fireworks continues for several hours until the street procession ends.

The vegetarian festival in Takua Pa seems exotic and faithful to its Chinese roots. For those who want to join or observe the event, they are advised to wear white clothes. 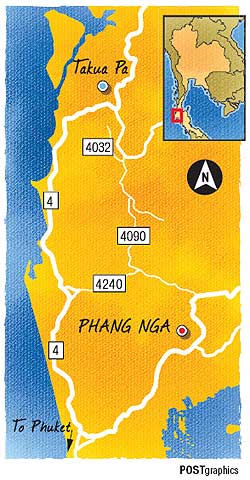 Takua Pa municipality also organises an ‘‘Im Boon Im Jae ’’ vegetarian buffet on Oct 22 where anybody donating 9 baht is welcome to taste any of the 199 vegetarian dishes on offer. Revenue from the event goes to Chinese shrines in the district. The easiest way to get to Takua Pa is to take a taxi or rent a car from Phuket Airport which is just an hour’s drive away. Tourist accommodation is available in the form of guesthouses, but if you are looking for bungalows or three- to five-star hotels, there are some between Khuk Khak and Khao Lak beaches which is along the way from Phuket to Takua Pa, about 30 minutes drive from town. For details, call the Takua Pa municipality office at 076-424-525 or visit the Tourism Authority of Thailand’s website at www.tourismthailand.org.