Coming back to life
Travel

Coming back to life

About 20km from Muang Prachin Buri is Si Mahosot Ancient City. It boasts Thailand's oldest replica of the Lord Buddha's footprints and also the country's oldest offshoot of Phra Sri Maha Bodhi Tree in India under which the Lord Buddha meditated and attained enlightenment 2,600 years ago.

Located about 3km southeast of Muang Si Mahosot archaeological site, Sa Morakot is a complex of ancient Buddhist monuments. It comprises several layers of structures dating from the 9th century. The Lord Buddha’s footprints have been carved onto laterite, and in the middle is a carved dhamma wheel with a swastika-shaped hole. It is considered the country’s biggest and oldest Buddha footprints. Archaeological evidence and a stone inscription found there suggest that the footprints and the ruins of the hall enshrining the footprints, a laterite front yard and walls date to the 9th century. However, the newer structures, including the front gate, a stupa and a long corridor, have the same floor plan as an ancient Khmer hospital building known as the arokaya sala , commissioned by King Jayavarman VII. These characteristics and the unearthed sculptures belonging to Bayon art suggest that these buildings were built during the 12th-13th centuries. North of the site are two ponds named Sa Morakot and Sa Bua La. Nearby is a hall displaying exhibition boards on the history and archaeological details of Muang Si Mahosot.

Muang Si Mahosot was one of several cities in Thailand dating to the Dvaravati period (5th-12th century). It had one of the 111 arokaya sala hospitals, commissioned by Khmer King Jayavarman VII.

"Muang Si Mahosot was a large rectangular-shaped city, surrounded by a 16m-to-20m-wide moat," said Arnat Bamrungwong, director of Fine Arts Office 5 Prachin Buri. "This Dvaravati city was self-reliant. Its people farmed, wove fabrics and made pottery and farming tools themselves, while trading with outside communities as well."

According to Arnat, residents of Muang Si Mahosot must have traded with overseas communities since pottery from India and porcelain from China have been unearthed there.

Other indications of the exchange of goods are minerals, such as lead used for producing bronze, earthenware from kilns in Buri Ram, utensils from Persia, Chinese porcelain from the Tang, Sung and Yuan dynasties, orange-coloured Carnelian beads, black agate beads and pottery necklaces from India and other South Asian countries.

"Si Mahosot City could have dated to the 1st and 2nd centuries because the images of a mystical animal known as makorn, belonging to Amaravati and Gupta art of India, were crafted on the edges of a pond there," said Sunisa Chitrbhandh, archaeologist and director of the administration office of the Fine Arts Department, who led a trip to Si Mahosot recently.

According to the Fine Arts Department's literature for the trip, archaeological findings, such as bas reliefs and sculptured icons, suggest that there had been communities in this area from before the 5th century AD, and probably as far back as the 1st century AD. They had the fundamental characteristics of agricultural villages that traded and assimilated with the cultures of other communities, including the Funan Kingdom. Funan was a pre-Angkor, Indianised empire located around the Mekong delta. It became wealthy due to foreign trade and spread its influence towards the Gulf of Siam and southern Myanmar.

Prehistoric polished stone tools found in this area suggest that the occupants must have had some connection with communities of the late prehistoric period along the former shoreline about 1,500-5,000 years ago.

From the 5th to 12th century, Muang Si Mahosot was a cultural centre of Dvaravati in the East. Later, Khmer art in the 12th-13th centuries had a stronger influence but declined in the 14th century. Muang Si Mahosot was also a port town with access by land and water routes to nearby areas. It was located no more than 10km from the mouth of the Prachin Buri River.

Other archaeological findings show that the city was densely populated and continued to develop until the 12th century before it eventually declined.

According to Arnat, the people of Muang Si Mahosot had easy access to sources of water. They would find water after digging only a metre down into the ground. For this reason, Si Mahosot City has hundreds of ponds. Among them are the Sa Kaeo, Sa Khwan and Sa Morakot, which are among the 538 archaeological sites inside and outside the city walls.

"It is noticeable that most of the ancient sites here are small since they were built during the period when people were very religious. According to a Buddhist rule, monks' living quarters must be 7 khueb wide and 12 khueb long [1 khueb is 30cm] and be surrounded by a balcony," he said.

"Muang Si Mahosot was probably a peaceful community since archaeological excavations found neither weapons nor big animals bones, which meant its residents neither fought each other or enemies nor ate big animals."

Subongkot Tongthongthip, director of the Prachin Buri National Museum, said: "Si Mahosot was unique, it was the only [Dvaravati] city whose outer part was dominated by Buddhism and inner part by Hindusim."

This means ordinary people were Buddhists while the rulers followed Hinduism. "There was evidence that its residents were both Buddhists and Hindus. A large number of religious sites and sculptured icons have been found so far," she said.

Those found outside the city centre belonged to the Theravada and Mahayana Buddhist sects.

According to Subongkot, the ruins of arokaya sala at Si Mahosot reflect the way ancient Khmer King Jayavarman VII got close to people using kindness and psychological approaches.

"Prachin Buri province has not only natural attractions but also great culture for people to learn about, including Dvaravati and Khmer art and architecture," Subongkot noted. 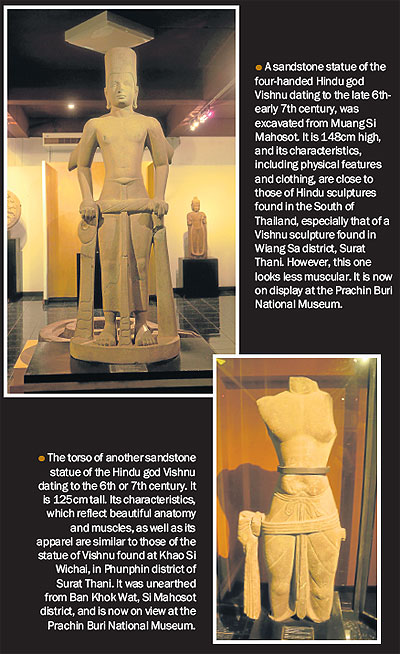 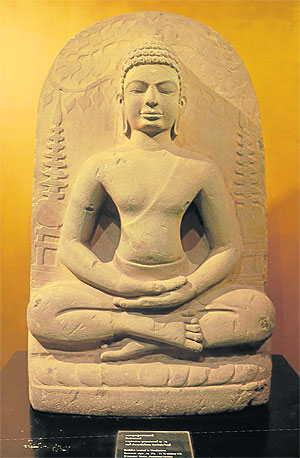 This Buddha statue was made of sandstone in the meditation posture in the Dvaravati style, influenced by India’s Pala Art, which flourished during the 8th-11th centuries. It was found in Si Mahosot district. Buddhist sculptures unearthed at Muang Si Mahosot belong to the 5th to 12th centuries (the Dvaravati period). Most of them are made of sandstone and show the characteristics of the Dvaravati period’s Buddhist art. An important one is Phra Nirantarai, a golden Buddha image in the meditation posture with the features of local art. It was presented to King Rama IV by Chachoengsao city clerk Phra Kriangkrai Krabuanyudh. It is now kept in Hor Phra Sulalai Pimarn, the Grand Palace. Other findings include a Wheel of Dhamma sculpture and the statues of the Bodhisattva and Prajnaparamita, Buddhas under the Mahayana sect, portraying the influence of Khmer art. 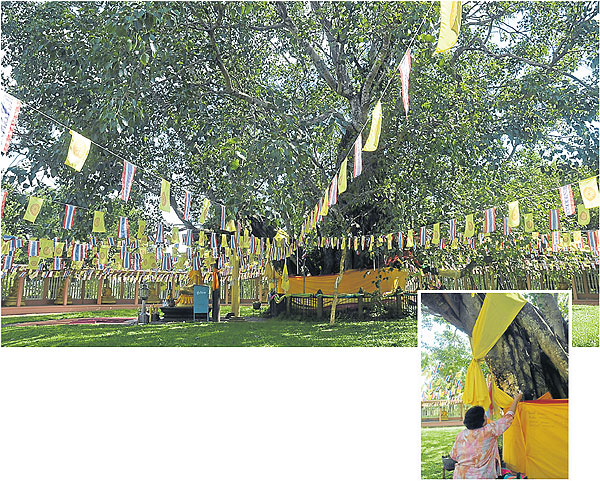 This tree, spreading 30m high and 20m in diameter, is believed to be Thailand’s oldest offshoot of Phra Sri Maha Bodhi Tree in India under which the Lord Buddha meditated and attained enlightenment 2,600 years ago. It is the only bodhi tree registered by the Fine Arts Department as a national heritage site and believed to be the oldest one in Thailand because an archaeological excavation there found bricks and laterite which were components of an ancient Dvaravati site 900-1,300 years old. The tree was believed to have been brought into the area from Anuradhapura of Sri Lanka on the order of Muang Si Mahosot’s ruler King Thawanampayadit. The pair of Lord Buddha footprints and the Noen Sa Bua stone inscription found at Muang Si Mahosot were inscribed with some words from Telagatahagatha, a Buddhist story composed in Sri Lanka. King Rama V mentioned the Sri Maha Bodhi Tree during his visit to Prachin Buri in 1908. It is an old and a much-worshipped tree. The Sri Maha Bodhi Tree is a symbol of Buddhism and later adopted as the name of Prachin Buris Si Maha Phot district. At present, it is an emblem of Prachin Buri province and part of the provincial motto. 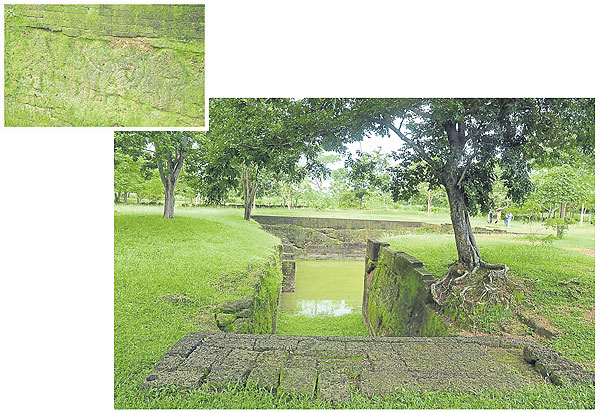 Sa Kaeo is a 18m by 18m pond dug about 5m deep into a natural laterite deposit. Dating to the 5th-6th centuries, this pond was believed to be a sacred site for performing religious ceremonies and other major rituals. It has a staircase on the west side. The edges of the pond are adorned with 45 bas reliefs — 24 elephants (one holding a water pot), eightmakorn mythical animals, 11 lions, a pig and a kinnaree, a mystical creature that is a half-woman, half-bird. All these animals are considered auspicious symbols of fertility, influenced by Indian art in the Amaravati and Gupta styles. Certain parts of the pond were carved in the image of a snake holding a column, similar to caduceus, the symbol of modern medicine. In the middle of the pond to the north is an elevated floor with a staircase and pillar holes, believed to be a pavilion. Its front was carved in the shape of a water pot placed between two elephants. 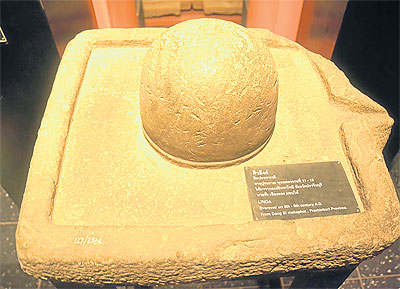 Alingam of Dvaravati art dating to the 6th-8th century was found at the Dong Si Mahasot forested area of Muang Si Mahosot. This symbol of fertility belongs to the Shaivism sect of Hindusim whose followers worship Shiva. It is at the Prachin Buri National Museum. 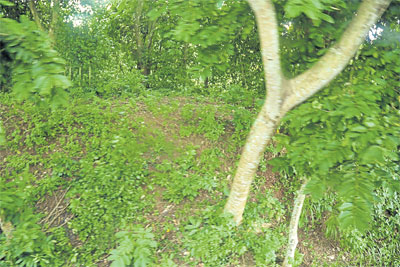 Si Mahosot was a large ancient city covering 120 hectares in Si Mahosot district. The town plan was rectangular, 700m wide and 1,500m long. Lying along the northeast-southwest axis, the town was protected by a 16m-to-20m-wide moat of varying depths. A canal, 12-15m wide, called khu luk son was dug through the centre of the city to connect moats at the north and south sides. A large dyke running from the southwest corner of the moat to Archaeological Site No.23 was probably built to channel water from the highlands on the southeastern side to a large swamp called nong faeb before running into the city moat. This ancient city is referred to by many names: Muang Phra Rot, Muang Mahosot, Muang Si Mahosot, Muang Si Watsapura and Muang Awathayapura. The Fine Arts Department registered it as a national ancient site in 1935 and called it Muang Phra Rot after a folk tale, Phra Rot Meri or Nang Sib Song. Later, the name was changed to Muang Si Mahosot. It was the name of a town in the tale Phra Mahosot in the Dasajati or Thotsachat Jatakas stories. Both stories were popular among the people of Lao descent who settled there in the Rattanakosin period. 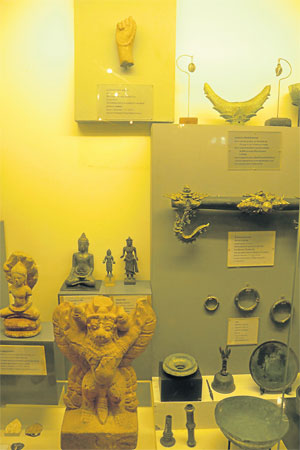 A number of bronze artifacts were unearthed from Muang Si Mahosot’s Archaeological Sites No.11 and 21 and are displayed at the Prachin Buri National Museum. A candle holder, mirror frame, water bowl and bronze naga heads reflect the influence of ancient Khmer civilisation during the 12th century. A mistake in the reading of ancient Khmer words inscribed on the bronze mirror frame, found at Site No. 21, led to another name for Muang Si Mahosot — Muang Si Watsapura. The word was later corrected and read as Awathayapura, which was in accordance with the name of the city appearing on an inscription at Khao Phra Wihan sanctuary in Cambodia. A Khmer inscription on another bronze artifact unearthed from the same site mentions a community called Sang Wok and is dated around 1187-1193. However, other findings suggest the city had prospered for centuries before the period mentioned. Therefore, there is no conclusive evidence to verify the original name. 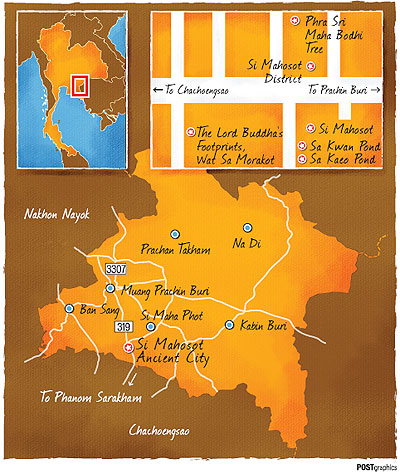 - To get to Muang Si Mahosot, travel from Prachin Buri downtown along Highway No.319 for about 20km, turn left onto Highway No 3070 and go further for another kilometre. The site is on the right.

- Prachin Buri National Museum displays ancient artifacts found at Muang Si Mahosot and other areas of this province and is located on Prachin Anusorn Road, Muang district. Call 037-211-586. It opens from 9am-4pm, Wednesday-Sunday. It is closed on public holidays.