Off the beaten track
Travel

Off the beaten track

Earlier this year the Tourism Authority of Thailand announced the 'Miracle Year of Amazing Thailand' campaign under which all 77 provinces in the country were invited to list attractions and experiences unique to them and not found elsewhere. Listed here are best tourism products from some provinces selected by local people _ natural, as well as cultural spots. 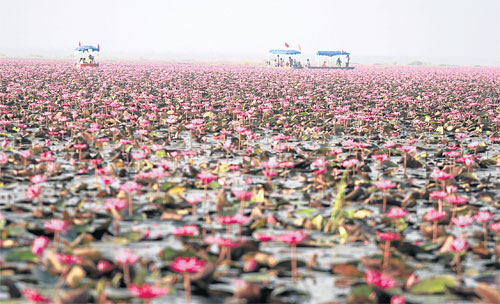 The lake of red water lilies

Lake Nong Harn occupies 20,000 rai and a significant source of water for the Nam Pao River, the lifeline of the province.

Starting October the water lilies, long dormant, spring back to life sprouting new shoots that in due course become leaves and flowers. By December the entire lake is a vast patchwork of vivid red colour of stunning beauty and a playground for the folks in the vicinity. The flowers are in bloom from dawn until noon. The flowering season runs until March. 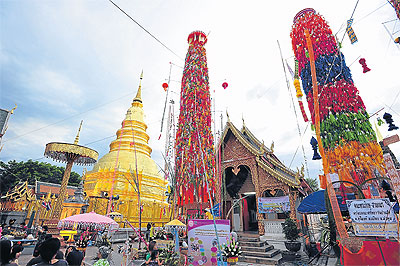 The Yong people, an ethnic minority native to the province, have a colourful way of marking the end of the Buddhist lent season.

They celebrate the occasion by building bamboo structures, some nearly 20 metres tall, using strips of the wood that are dyed and to which they tie offerings for monks _ snacks, candles, cigarette, matches, utensils, dry foods, money, robes and other items.

The structures _ called salak yom, meaning "dyed tree of gifts" _ are part of the salak phat rite native to the northern provinces of Thailand in which monks and novices of local monasteries receive gifts from local people delivered via a lucky draw.

The Yong, however, perform the rite for a different reason. Every year they build about 20 of these structures at Wat Phra That Hariphunchai in the provincial heart of Lamphun.

The tradition of making salak yom trees is symbolic of Yong girls who turn 20, the marriageable age. Before getting married, they use their savings to build the tree to showcase their patience, efforts, handicraft skills and devotion to religion. The dyed strips at the end of bamboo structures are meant to lend colour, hence the name.

- Wat Phra That Hariphunchai sits downtown Lamphun, 20km south of Chiang Mai city, or 670km north of Bangkok. You can get there via Highway 1. 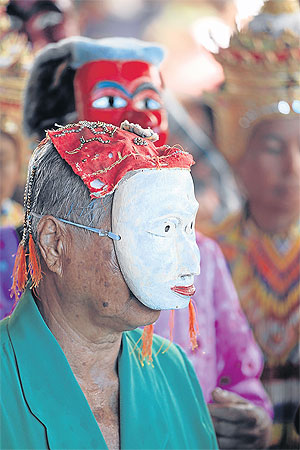 No matter where they live or work, the natives of Ban Tha Kura in Sathing Phra district of the province return home to attend the annual bathing rites for the tiny 2x2.5m but highly revered image of goddess Chao Mae Yu-hua enshrined at Wat Tha Kura.

Cast in gold 300 years ago, it is kept in a round container in nine layers of cloth of different colours.

On the first Wednesday of May her followers, their wishes granted, descend in hordes to make good on pledges made to the deity, which vary person to person: some pledge flowers, others to enter monkhood but the most common by far is a performance of the native manohra dance, for it is also supposed to be the deity's favourite.

But it must be performed in an authentic manner, meaning the stage must face in the right direction to the spirit house and the offerings being made on the day. And the entire sequence is repeated the following two days. It may come as a surprise to outsiders why it takes so much effort to appease a statue this tiny.

But why not? After all, it is the spiritual heart of Songkhla.

- Sathing Phra district is around 900 kilometres south of Bangkok. It can be reached via Highway 408. 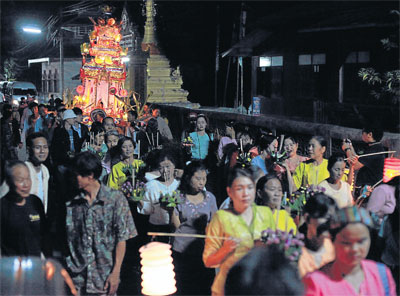 While the average Thai believes the Loy Krathong festival and ceremony is a time to seek forgiveness from the Goddess of Water for dirtying her rivers and streams, to the Tai people of Mae Hong Son it is an occasion to welcome Buddhist saints in their midst.

According to the belief of the Tai people, there are eight saints, four of whom have already passed away and the remaining four are working hard teaching dhamma.

On the full moon day of November, the saints come to this world and thus it is a good chance to offer them bowls and utensils, which the people of Mae Hong Son put on a bamboo float or krathong about four metres tall and release it onto a river.

The float is in the shape of tower without crest, because the crest of the tower in any celebration is normally reserved for the Buddha only. The local people join in by releasing their own floats which are smaller in size.

After the ceremony, the bowls and utensils are wrapped in leaves and later that night taken and delivered in secret to local monasteries. In the morning the monks would find them, but they wouldn't know which one came from whom. 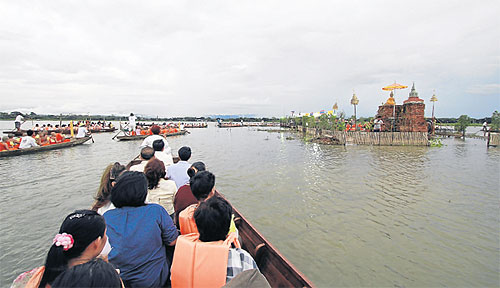 Kwan Phayao is Thailand's third largest freshwater lake with a spit of land in the middle and a temple long neglected but still highly revered by the local people, Wat Tilok Aram.

A stone inscription at the temple says it is 500 years old, but for the last 60 years or so, following the building of a watergate, the temple has remained submerged and in poor condition with only its principal Buddha statue and a pagoda to show for.

However locals regularly take boats to the temple to pay homage and make a wish, as it is their belief the Buddha image empowers them with positive thinking, and on important religious days like Makha Puja, Visakha Bucha and the end of the Buddhist lent, they converge there for wian tian candle light procession in boats, which is as much spectacular as enlightening.