An escape into an adventurous breathtaking time capsule

Myanmar is one country no motorcyclist could ever get into before so when someone asked if I would like to ride there, I jumped at the opportunity. We'd be the first bikers to cross the border and do a full tour of the country. 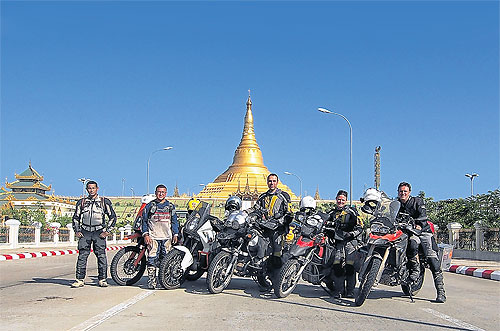 The riders in the capital Nay Pyi Taw.

Last month, on Dec 6, I arrived in Mae Sot, Tak, and met up with the other riders on this tour _ Dusit, Joerg, Heike and Filippo. The following morning the five of us got to the Mae Sot-Myawadi border crossing at 7am and, thanks to the permission we had obtained beforehand, made it into Myanmar within an hour. In Myawadi we spent half an hour acquainting ourselves, and off we were on the first leg of our journey to Kyaikto, 296km away.

My first taste of Myanmar was riding 60km through the mountains _ the road condition was horrendous, the scenery magnificent, just the way I like it. However, what made this ride different from others was policemen armed with AK-47s leading us. In Kayin state, fighting still breaks out occasionally between government troops and rebel groups _ and every time I was about to overtake the police would yell at me to stay behind.

We got to the bottom of a mountain and, to my surprise, I saw rows and rows of trucks and cars waiting to go up, and I asked our guide what was going on. He told me this road is one-way only and traffic alternates _ up and down _ on a daily basis. On this particular day it was going up so the police had closed down the entire mountain for us. I couldn't believe it and didn't know what to think. Were the police there to protect us, spy on us or give us the VIP treatment? To this day, I still don't know. By the time we arrived in Kyaikto I was dead tired, had a quick dinner and was in bed by 10pm. 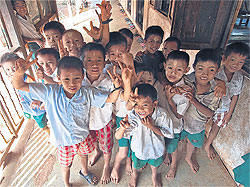 Myanmar kids pose for the camera.

Next morning we got up early and headed for Mt Kyaiktiyo, also known as The Golden Rock, one of Myanmar's most sacred places.

The problem was we came on a national holiday and there were at least 50,000 people looking to go up this holy mountain. The only way up was to walk (forget that) or get on government trucks that won't leave unless they're full to the brim. To see a truck come to a halt and thousands of people clamouring to get on was a sight _ I had to push people away, they kept knocking my glasses off.

Nevertheless, it was worth getting to the top and seeing thousands upon thousands of Burmese up among the clouds showing off their faith in Buddhism, it was quite a magnificent scene. We left Mt Kyaiktiyo around 3pm and headed for the capital Nay Pyi Taw some 363km away.

So far in Myanmar we'd been riding on broken down roads with potholes, one-lane dirt and gravel roads. Suddenly entering the capital Nay Pyi Taw we found ourselves on an eight-lane motorway. It was like riding into a dream, and the whole capital reminded me of a giant Disneyland _ a total contrast to the rest of the country. Hotels, shopping malls, government buildings and restaurants _ you name it. However, the city was empty with only us on the road _ it felt surreal, tucked away inside its own cocoon. We spent the following day taking photos at various landmarks and then left for Bagan, 300km away.

Bagan is one of Myanmar's top attractions, with thousands of pagodas scattered across a desert-like landscape _ think Angkor Wat on sand. If you're into ancient cities, enjoy reminiscing about living in the past, this is the place to be. Furthermore, what made Bagan a special place for me were the thousand or so pagodas linked by a maze of sandy dirt roads, this was a dirt biker's playground. Honestly, we didn't want to leave and could have spent the entire day just riding around this beautiful ancient city. By mid-afternoon we were off to Pyay, 386km away. On the way we rode through a town where I saw Aung San Suu Kyi campaign posters everywhere. Everyone I came across in Myanmar loves her. The people there told us The Lady had just left _ an hour ago. We missed seeing her in person, I couldn't believe it. We arrived in Pyay disappointed and had an early evening. 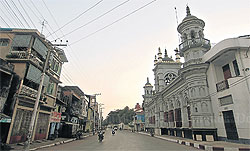 A beautiful mosque in Mawlamyine.

Next morning we left for Bago, 320km away. Bago, a former capital, is known for its religious sites. The Shwethalyaung Buddha, Four Figures Paya and Mahazedi Paya are just a few of the famous sites of Bago. Moreover, it is one of the most popular destinations for Thai tourists because during the 16th century famed King Naresuan of Thailand was in residence here.

Next day we rode 280km south to Mawlamyine, our last destination. Mawlamyine is a relaxing seaside town filled with mosques and colonial-era buildings. Similar to Bagan, the place takes you back to the mid-19th century during the British rule there. It was the perfect spot for a relaxing last night in Myanmar.

On the last day we left Mawlamyine and took a shortcut to get to the Thai border 250km away. This shortcut turned out to be my favourite. It was a dirt road that connected one village to another with rice fields in between. Eventually it led to the same mountain road the police had closed down for us a week earlier when we came through; however, heading home we shared it with hundreds of truckers and drivers going in the same direction.

Imagine Bangkok gridlock on a narrow dirt road going up a steep mountain. Even on a motorcycle it was difficult weaving through the traffic. We slowly made it to the front of the traffic and had the last 30km or so to ourselves. I took my time to enjoy this last stretch to the border before crossing back into Thailand.

We arrived in Myawadi at 4pm. I quickly said bye and thanked everyone, did the necessary paperwork, and rode over the Friendship Bridge back into Thailand. From Mae Sot I rode 500km straight to Bangkok, arriving home around 10pm, exhausted but happy and fulfilled.

Looking back I had a wonderful adventurous week in Myanmar. I feel blessed to have been part of a pioneering group of riders who got to see Myanmar before it really starts to open up and welcome more and more visitors.

In hindsight, I rode into Myanmar with an image of a country that was locked in a time capsule, isolated for 50 years. A week later I left feeling it's a country on the verge of change about to open up. However, the strongest imprint it made upon me was its people.

Everywhere we went the people were friendly and kind, always willing to give a helping hand. With the AEC (Asean Economic Community) approaching in two years' time I really hope the opening up of Myanmar will not change this character of their people. I would love to come back in a few years' time and still feel like I were escaping into a mysterious, adventurous time capsule. 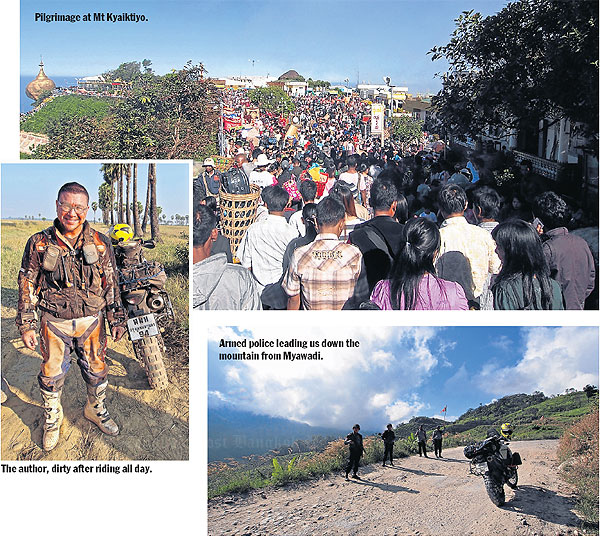 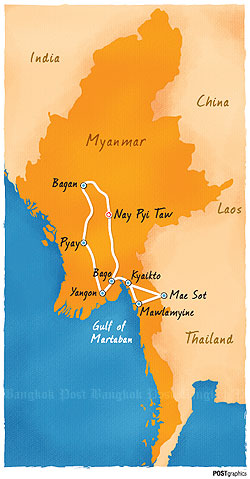