It may not be the most obvious winter wonderland, but Kazakhstan wins hands-down when it comes to the novelty factor

Kazakhstan is not a totally unfamiliar name to the average Thai, since it is occasionally mentioned in news reports, especially those concerning sports. One of the republics of the former Soviet Union, it is now the ninth largest country in the world with a land area five times that of Thailand's. It is a major oil exporter and thus one of the most prosperous countries in Central Asia. 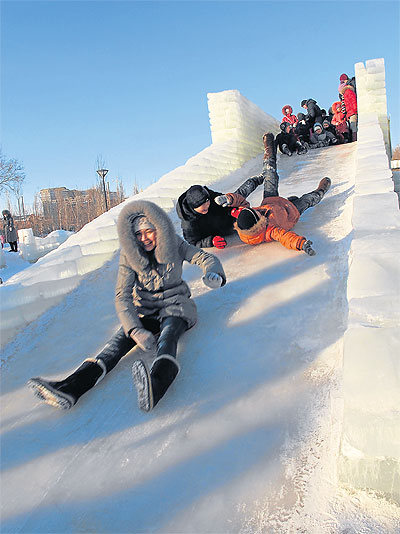 But not much else is generally known about Kazakhstan here, despite the fact that it provides tens of thousands of visitors to the Land of Smiles each year.

Kazakhstan, which declared its independence in late 1991, shares its borders with two superpowers: Russia, its former Soviet Big Brother, and China. So far it has done a good job of maintaining a balance in its relations with both neighbours, thanks partly to long historical ties with the former that go back to the days of the czars and their empire; and also to the fact that its people share Asian characteristics with the Chinese, as well as with the Mongolians from whom they are believed to have branched off after Genghis Khan's vast territory was carved up among his sons and grandsons. At the same time, similar to the other "stans" farther south _ Kyrgyzstan, Tajikistan, Turkmenistan and Uzbekistan plus two others which were never part of the USSR: Afghanistan and Pakistan _ Islam is the dominant faith in Kazakhstan. The second most popular religion there is Russian Orthodox Christianity. 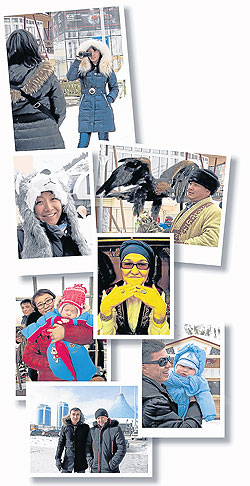 So the country boasts a good mix of cultural and historical elements that, over time, have evolved into a distinct national identity. Kazakh, the official language, is believed to have been spoken there since at least the mid-16th century.

Due to the nomadic lifestyle that was once the norm for people in these parts, permanent buildings of any antiquity are virtually non-existent. In Almaty, the largest city and the country's capital until that status was conferred on Astana, about 1,000km to its northwest, in 1997, even those structures erected when it was part of the Russian Empire have since been destroyed by earthquakes; one of the rare exceptions being Ascension Cathedral which still towers gracefully over Panfilov Park. As a result, most of Almaty's oldest buildings date back only to the Soviet era.

But there are many aspects of Kazakhstan that are little known beyond its frontiers. Its mountains, for instance, are a winter wonderland at this time of year. And I've heard about the abundance of beautiful wild tulips which bloom there in springtime. But the best way to learn about a place is, of course, to see it with your own eyes.

Tourism in this Central Asian nation is still in its infancy. The total number of Thai visitors currently amounts to no more than a few hundred per year _ and most of those go there to work.

So if you're looking for a destination where you can boast of being among the first wave of Thais to have set foot there, Kazakhstan is definitely an interesting choice.

People of the steppes

Kazakhstan's population of 17 million is made up of several ethnic groups. The majority of its citizens, called Kazakhstanis, are, not surprisingly, ethnic Kazakhs (63.1%). Ethnic Russians (23.7%) are the biggest minority, while the remainder of the populace is largely a mix of Uzbek, Ukrainian, Uighur and German stock.

There is also an ethnic Korean component. During Soviet times, the ancestors of these people were forced to relocate there, from an area in the eastern USSR that bordered what is now North Korea, to work as farm labourers.

Although the present generation can no longer speak Korean, many still use common Korean family names such as Park (Pak) and Kim.

One of the Kazakhstanis in a photo on this page is of Korean descent. Can you tell which one?

To check if you've guessed correctly, see the answer on page 6 (under the map). 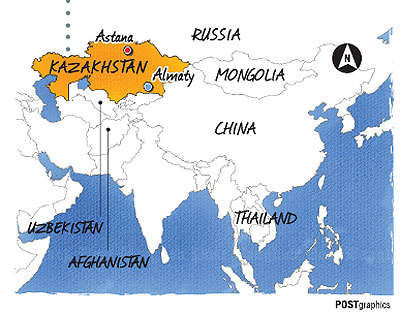 - A direct service between Bangkok and Almaty is operated by Air Astana, Kazakhstan's national carrier. With the exception of Mondays, there are daily flights from Suvarnabhumi, leaving at 9.25pm and landing at Almaty International Airport very early in the morning, at 3.45am local time (one hour behind Thai time).

Return flights are available on Mondays, Wednesdays, Fridays, Saturdays and Sundays. However, from April 1, more flights are to be added to the summer schedule and there will be at least one every day, in both directions.

Round-trip economy tickets start at around 23,000 baht. For details and promotional fares, check the airline's website (www.airastana.com) or call 02-634-2552_4.

- Thais need a visa to enter Kazakhstan. A tourist visa costs the equivalent of US$40 (1,200 baht) and a business visa, US$80. The application process takes about two weeks.

It should be noted that to apply for a visa, apart from the usual documents, you must also have a "letter of invitation" (LOI) which can be issued either by your host in Kazakhstan (if you have one) or the hotel into which you have booked.

- The Kazakhstan embassy is located on the 8th floor of Building A, GPF Witthayu Towers, Wireless Road.

- Kazakhstan's currency is called the tenge (usually abbreviated to KZT). One baht is roughly equal to 5 KZT, so the easiest way to work out prices given in tenge is to divide them by five. The cost of living in Almaty is far from cheap. To give you some idea: a 250ml bottle of cola retails for 100 KZT; and a cup of cappuccino goes for about 400 KZT.

- Most people communicate in either Kazakh or Russian. Few speak English and signs written in English are rare. Body language usually works though!

- Free Wi-Fi is available at Almaty International Airport and also at many of the public buildings in the city. 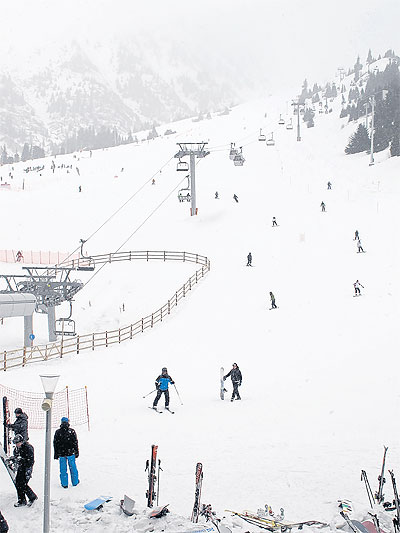 Located 2,260m above sea level in the Zailiyskiy Alatau, part of the legendary Tian Shan mountain range, the ski resort of Shymbulak is only 25km from downtown Almaty. The snow park can be reached via cable-car which starts from Medeo, where the country’s best-known mountain skating rink is located. The scenic ride takes about 15 minutes. From the upper station in the cable-car system, skiers and snowboarders can go farther up the mountain on chairlifts. The fact that Shymbulak and Medeo served as venues for the 2011 Asian Winter Games says something about the quality of the pistes and other facilities here. If you prefer being a spectator, there are restaurants and a coffee shop at the ski resort where you can chill out. 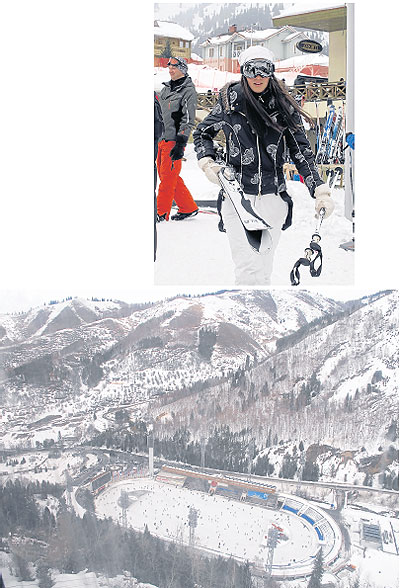 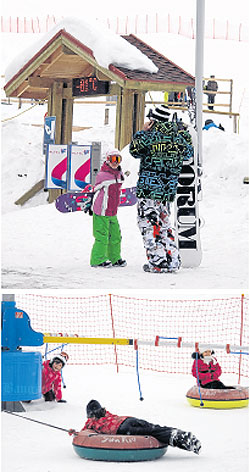 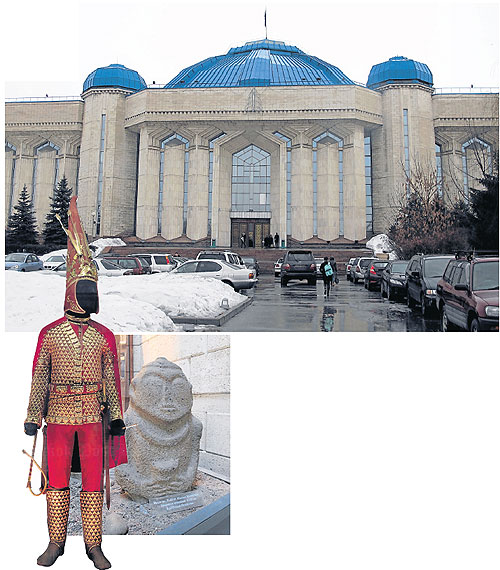 There are quite a few museums in Almaty, each of which is dedicated to a particular field, from history, archaeology and literature to arts, nature and geology. There’s no way you could visit them all — and no reason why you should — during a short stay in the former capital. But at least make sure you set aside some time for the most important one, the Central State Museum. Here, you’ll learn about the history of the country as well as the cultures, beliefs and way of life of its people. This place offers you the kind of knowledge that will enrich your time in Kazakhstan. Among the numerous exhibits are antique items from nomadic times, everything from horse-riding equipment and weapons to traditional costumes and a yurt — the circular and very portable shelter widely used by the nomads of Central Asia. Here, too, you will find a replica of the so-called ‘‘Golden Man’’, an ancient warrior whose lavishly decorated gold armour was unearthed in 1669 and who is revered as a symbol of Kazakhstani nationhood. The museum is divided into sections, for each of which you need a separate ticket to enter. 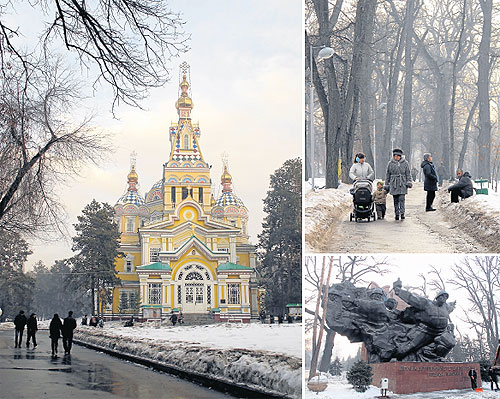 Located in downtown Almaty, Panfilov Park is a big patch of green, a sanctuary for city dwellers. Within it stands Ascension Cathedral, a wooden Russian Orthodox church that dates back to Czarist times, and a statue erected to commemorate 28 Kazakh men who served in the Soviet army, defending Moscow from advancing German troops during World War II. These heroes were led by a Soviet general named Ivan Vasilyevich Panfilov. So now you know who the park was named after. It’s a tradition for newly-wed couples to pay their respects to this monument, showing their gratitude for the bravery of these soldiers without whom life for modern-day Kazakhstanis would probably be very different. 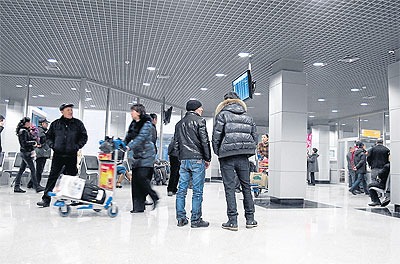 Taxis at Almaty International Airport are available round the clock. Drivers will approach you as soon as you step out of the restricted area in the arrivals hall. Not all of them are legal, though. Their cars are not fitted with a meter and, in many cases, don’t even have a taxi sign. Unless you can speak Russian or Kazakh, play it safe and arrange to be picked up from the airport by your hotel.