How a small band of dedicated townspeople are saving an historic, riverfront area in Chanthaburi from dereliction

Prapapan Chatmalai turned up for our meeting in Chanthaburi town resplendent in an elegant, red, Chinese-style dress. The 64-year-old told me she regularly walks from her house to the Chanthaboon Learning Centre where vintage photos of the riverside area in which she grew up are on permanent display. Since retiring from her job as a schoolteacher, Prapapan enjoys sharing information with visitors about the history of her neighbourhood and several distinctive buildings which have survived fire, floods and the passage of time. 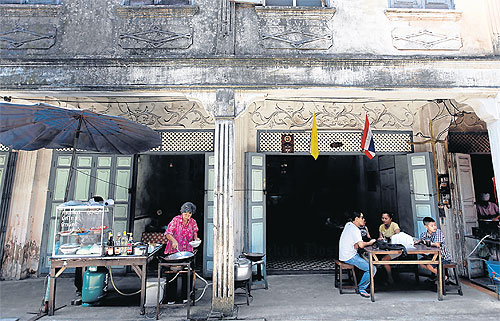 The old riverside community of Chanthaboon has a charming, laid-back atmosphere.

"Our Chanthaboon waterfront community was founded over 300 years ago during the reign of King Narai [1656-88]," she volunteered, adding that the district was initially home not only to Thais, but also to immigrants from China and what is now Vietnam.

"The Thais normally farmed the land while the Chinese and Vietnamese were traders and merchants. Taking advantage of its prime location next to the Chanthaburi River, our community gradually grew from a small market into a real commercial hub where you could buy practically everything including gems and jewellery."

Together with the neighbouring province of Trat and the region around Pailin, across the border in Cambodia, Chanthaburi used to be an important source of gemstones, especially rubies and sapphires.

The heyday of Prapapan's ancestral community occurred about a century ago when its main artery, an alley only suitable for pedestrian traffic, was widened and turned into a thoroughfare running parallel to the river. Now called Sukhaphiban Road, this was the first paved street in the whole province.

"It's about a kilometre long and can be roughly divided into three sections," she informed me. "The upper part was where various government agencies were located. The central drag was occupied by Tha Luang market and along the lower end was where many people lived." 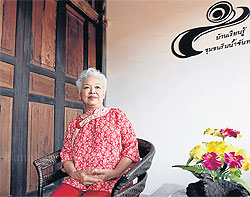 It became the most modern part of town and was visited by King Rama V on two separate occasions, she said. But things went gradually downhill after more than half the area was razed by a conflagration in 1990. When the district was badly affected by flooding nine years later, more and more residents began moving out. Government offices and the gemstone market were also relocated. Shops were closed, houses were abandoned and this once-bustling neighbourhood, now inhabited mostly by elderly people, took on a desolate appearance.

"It was sad to see our community so stripped of life, like it was dying a slow death," Prapapan recalled.

But everything started to change for the better in 2009 when the provincial Commercial Affairs Office came up with a plan to preserve venerable old communities, including Chanthaboon, and allocated a budget for restoration work. A public hearing was held and this led to local people setting up a group, the Chanthaboon Waterfront Community Development Committee, to draft guidelines.

"We asked ourselves what we wanted to become," explained Prapapan, who was elected president of the committee.

"After studying the format of Sam Chuk market in Suphan Buri and Amphawa floating market in Ratchaburi, we reached the conclusion that we didn't want to be just another quaint market destination.

"We realised that if we just copied other successful market-revival schemes, nobody would be interesting in visiting us. So we looked more closely at what we possessed and we concluded that our main treasures were our history and the rows of shophouses built in a Chinese or colonial style.

"Other assets we identified were the local cuisine, our Buddhist temples and Chinese shrines and the Catholic church. Our river is still clean and pleasant to walk alongside.

"In fact, we discovered we had many things we could be proud of," she said with a smile.

So the committee decided to promote both the cultural and the historic attractions of Chanthaboon. Members undertook to do research, digging deep into the past of individual shophouses.

One was the former home of a dignitary named Luang Ratchamaitri who is still remembered as an agricultural pioneer; in 1908 he imported saplings from what was then British Malaya to set up the very first commercial rubber plantation in eastern Thailand. Another handsome old building, a wooden shophouse at 69 Sukhaphiban Road, was eventually converted into the aforementioned learning centre which also functions as a folk museum and tourist information bureau. Prapapan said she makes a special effort to keep this open on weekends when the town receives most of its visitors.

"One of our first tasks was to put plaques on the walls of those two houses to let passers-by know the significance of each," she said. "That also helped to make the locals aware that we had something valuable here that needed preserving."

The committee has now managed to affix plaques to another 11 historic structures in the vicinity. Detailed sketches of some of the old shophouses were executed by two graduate students from Arsom Silp Institute of the Arts who were assisted by 20 pupils from a local technical college. The committee brought out a special map for tourists and has also organised several photo contests to encourage people to visit this historic quarter.

"We also organise a three-day event around October each year to show off what we have," Prapapan revealed. Dubbed "Colours Of Yesteryear In Chanthaboon Waterfront Community", this is held along Sukhaphiban Road and features performances on a makeshift stage plus a section temporarily closed to vehicles where hundreds of stalls are set up to sell meals and snacks, hand-made products, clothes and fashion accessories.

"We prefer the stall-holders to be locals and we only hold this event once a year because we don't want to inconvenience people who live in the area," she said, adding that "Colours Of Yesteryear" has been held for three years running now and that it always draws thousands of visitors.

The street fair has also helped restore some life to the old community. Several dilapidated shophouses in the area are now being renovated and some have already been converted into guesthouses, cafes or restaurants.

While all this commercial activity is welcome, the long-term goal nurtured by Prapapan and her colleagues on the committee is to open two more learning centres. One of these would focus on the history of gemstone-mining and jewellery-making in the community and in the province at large and the other would be devoted to mats hand-woven from kok, a hollow-stemmed aquatic plant which resembles papyrus. Prapapan said the technique of weaving these mats was originally brought to the area by Vietnamese migrants.

She estimated that the project would cost about 10 million baht and said the committee is currently searching for ways to raise this sum.

"We hope we can make it happen within the next five years. Our ambition is to make our community into a kind of living museum."

Sukhaphiban Road is usually packed with visitors during the three-day ‘‘Colours Of Yesteryear’’ street fair held in October. The kilometre-long artery is closed to cars for the duration and local people set up hundreds of stalls along both sides of the street. A jetty for boats plus several riverside coffee shops and restaurants are all good places to chill out. In this photo you can also see a cupcake stall run by a local guy who owns a bakery shop in town. If you visit this street at other times of the year you’ll find several shophouses open for business; some are small restaurants, others sell groceries and household necessities. A popular Chanthaburi treat, which one of the locals might encourage you to try, is a brand of ice-cream (pronounced i-tim in Thai) called Jaruat. Made by a family business according to a 50-year-old recipe, it comes in many flavours, but the bestseller is still the original coconut-based concoction. 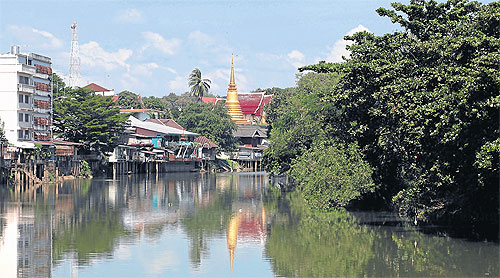 A view of the Chanthaburi River. It was a major transportation and communications artery in these parts until the advent of sealed roads. 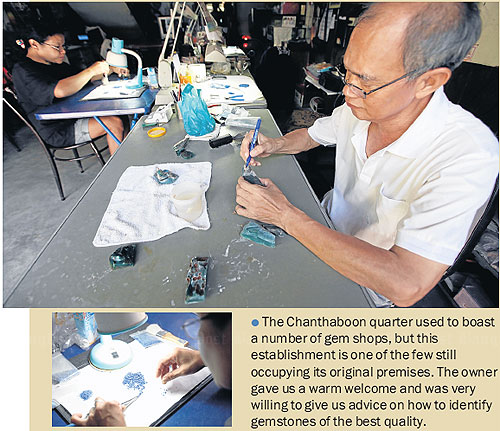 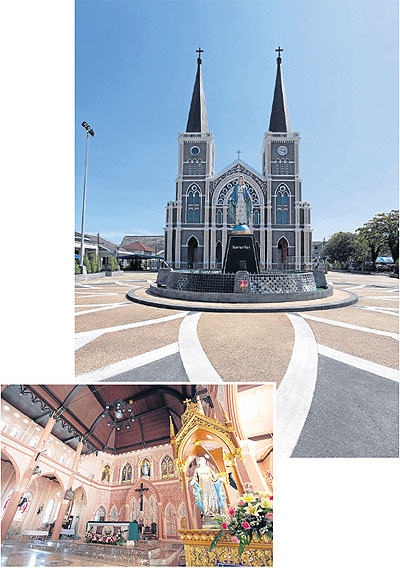 The Cathedral of the Immaculate Conception was built in 1711 using funds raised by 130 Vietnamese Catholics and their pastor, a French priest. It was expanded several times after that date to accommodate its ever-growing congregation. The present Neo-Gothic structure dates from 1905 and is decorated with stained-glass windows and murals. It has been the seat of a Roman Catholic bishop since 1944. A much-treasured local landmark, the cathedral celebrates its 302nd anniversary this year. 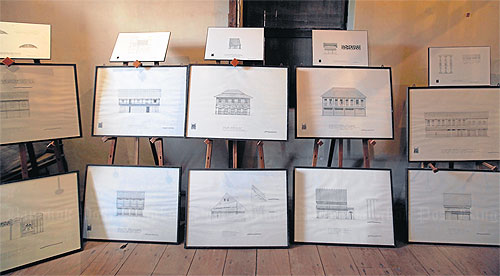 These architectural sketches of century-old local buildings are on permanent display in the Chanthaboon Learning Centre. They are the fruit of a project involving two graduate students from Arsom Silp Institute of the Arts and pupils from Chanthaburi Technical College under the guidance of Prof Wirat Sethsathaporn. They depict the distinctive design elements in each structure, built entirely of wood or a mixture of wood and brick, plus decorative features etched into the concrete facades of some of the two-storey shophouses. Given the level of detail captured, these drawings could be used as reference for renovation work at some point in the future. 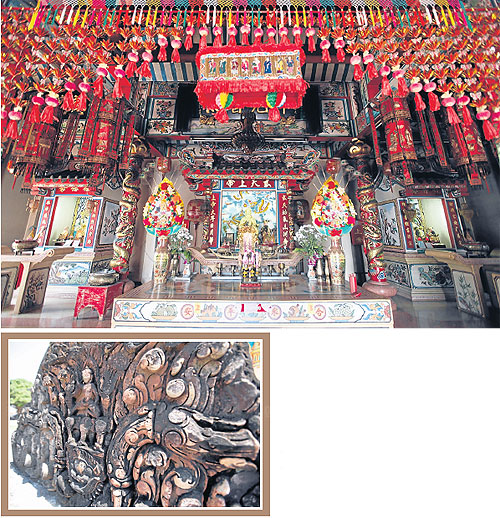 Tua Lao Eia is the name of this Chinese shrine. It houses Chao Pho Seua, a deity revered by locals of Chinese extraction. Next to it is another shrine dedicated to Guanyin, respected as ‘‘the goddess of mercy’’ by many Thais. Many of the townspeople visit both shrines during the Chinese New Year period. Just a short walk from here, heading westwards, is yet another Chinese shrine called Joe Sue Kong. A stroll to the east will bring you to a Buddhist temple constructed in the late Ayutthaya period named Wat Bot Mueang; here you will find an ancient Khmer-style lintel depicting Indra seated on an elephant. 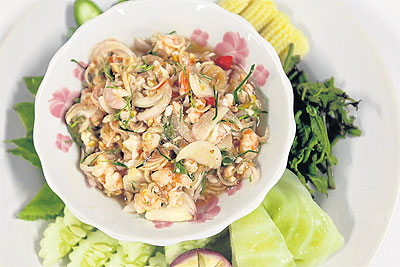 Tropical fruits are one of the main cash crops in Chanthaburi. This dish is called saeng wa and it is made from shrimps, shrimp paste and herbs. Its flavour resembles that of a yam (spicy Thai salad) and it is one of the recommended dishes at Chantorn Phochana, a 50-year-old restaurant where you can also find many other delicious treats based on fruit including spicy durian salad, massaman curry with durian, duck curry with rambutans plus sweet-and-sour salak (Salacca zalacca) served with a spicy shrimp paste. The restaurant is located on Benjamarachootit Road, a short walk from the Chanthaboon neighbourhood. 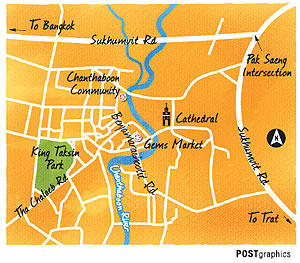 - The Chanthaboon quarter is located in the heart of Chanthaburi town. From bustling Benjamarachootit Road, turn left onto Tha Luang Road and then left again onto Sukhaphiban Road. This is the thoroughfare which runs through the community, but it may be hard to find a parking space along this stretch. So ditch your vehicle on Benjamarachootit Road and walk. Or else drive across the river to the Cathedral of the Immaculate Conception, which has a car park, and then make the short walk back to the Chanthaboon neighbourhood.

- Chanthaburi town boasts some quite decent accommodation options. Popular with backpackers, the Aroon Sawat Hotel is within the Chanthaboon neighbourhood itself. Several bigger hotels are located within easy walking distance, including the newly renovated Kasemsarn (www.hotelkasemsarn.com) and the three-star Gems Club Hotel.