The ancient culture was not limited to the Central Region of Thailand, but spread to the present-day Northeast, where Fa Daed Song Yang in Kalasin is an outstanding example

More than 500km away from Bangkok is Fa Daed Song Yang City dating back to the Dvaravati period (6th-12th centuries) and located in what is now Ban Sema in Kamalasai district of Kalasin. It was registered by the Fine Arts Department as a historic site in 1936. 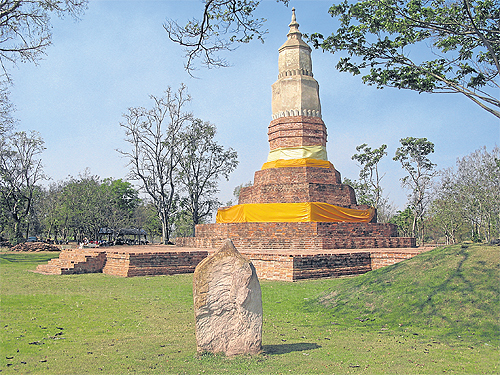 Phrathat Yakhu is Fa Daed Song Yang City’s most important site. This 15m-high brick octagonal stupa is the largest among all the 14 stupas found in the city. The base with four corners standing out is the art of the Dvaravati period while the upper part was extended with bricks and fresco during the Ayutthaya period and decorated in a local northeastern style during the Rattanakosin period. In 1983, 11 sema stones were brought back to where they are believed to have been erected. Every May, local villagers organise the ‘‘Bung Fai’’ or bamboo rocket festival at Ban Sema to seek rain and good fortune for the community.

"Fa Daed Song Yang Ancient City is also called Muang Sema since hundreds of sema stones [ordination hall demarcation stones] were found there. It is in a sema stone-like shape, surrounded by two soil walls and a moat. The city was about 1km in width and around 2km in length, and was considered one of the larger cities in the Northeast," said archaeologist Pimnara Kijchotiprasert of the 10th Fine Arts Office in Roi Et.

According to Pimnara, the sema stone inscriptions indicate development from the Dvaravati period to the Ayutthaya and Lan Chang periods, while archaeological excavations confirm human settlement since pre-historic times.

In the 7th century after the spread of Buddhism to the area due to the influence of trade, the city flourished and was expanded. Evidence of human settlement includes graves where human skeletons and fragments of pottery, as well as jars containing human bones, were found.

The main religion was Buddhism since many clay votive tablets and hundreds of sandstone sema stones were unearthed.

"Buddhism was important during the Dvaravati period. Stories carved on sema stones are mostly stories from Jataka tales and the Lord Buddha's life. The Northeast has many ancient sites related to Buddhism. Other major ancient cities of the Dvaravati period include Khu Bua in Ratchaburi, U Thong in Nakhon Pathom with Phra Pathom Chedi and Phra Prathone Chedi," Sunisa Chitrbhandh, archaeologist and director of the administration office of the Fine Arts Department, said.

According to the Fine Arts Department's related handbooks, Fa Daed Song Yang has been called by several names. Locals called it Fa Daed Song Hang after a folk tale, while some historical documents during the period of King Fa Ngum of Vientiane call it "Pone Phung Daed" (sunbathing zone). It is located in Kalasin's low-lying plains where the Phan and Pao rivers merge.

The city adopted Buddhism and also the post-Pallava alphabets from India via trade and contacts with the Central Region. Fine Arts Department expert Toem Meetem read the inscribed words behind two votive tablets and found that they were in an ancient Mon language, written with post-Pallava characters used in India around the 9th century. Both inscription plates mention the construction of Buddha images in dedication to monks who had ordained the owners of the images. A sema stone at Wat Phochai Semaram contains an inscription stone written with the post-Pallava letters saying, "Merit for Niamoon and for Saming Phra Jak in the future". Niamoon is believed to be a person's name, while the words "Saming Phra Jak" are a pronoun for a bureaucrat-turned-monk.

Archaeological excavations since 1967 found 14 Buddhist sites built in the Dvaravati art style dating to the 7th-11th centuries. The main one is Phrathat Yakhu.

At Fa Daed Song Hang, there were traces of salt mining and the making of bronze and iron tools. Rice fields were symmetrical square shapes. In addition, more than 10 stupas and several ponds like Nong Trapang Pond were uncovered. Historical evidence shows the city came to an end and became deserted after being attacked along with many other cities by the army of Burmese King Anawrahta (1015-1078).

About 20km from Muang Kalasin is Phu Khao. It boasts a reclining Buddha carved into a rock cave by locals who had strong faith in Buddhism.

This practice is similar to the construction of the replicas of the Lord Buddha's footprints as the symbol of Buddhism, according to Sunisa.

"Kalasin also has three reclining Buddha statues. One of the three statues is at Phu Khao and the others from the Dvaravati period are enshrined at Wat Inpratharnporn [Phu Por]," Pimnara noted.

Besides in Kalasin, traces of Dvaravati culture can be found in other northeastern provinces like Roi Et, Sakon Nakhon and Nakhon Phanom. Roi Et boasts several pre-historic archaeological sites and ancient cities with moats while the base of Phrathat Phanom is believed to be Dvaravati art. Sakhon Nakhon has a number of pre-historic sites, Dvaravati sites with sema stones, two Khmer sanctuaries in Muang district and several cave paintings. 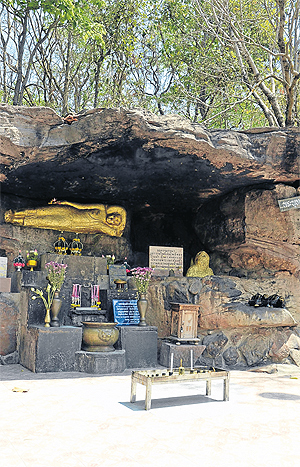 Wat Buddha Nimitr, or Phu Khao, in Sahat Sakhan district of Kalasin houses a 2m-long and 0.5m-high reclining Buddha statue carved into a rock cave. The statue is unique for lying on the left side of the body and having no hair bun. Some people believe it represents the Lord Buddha when he attained parinirvana , while another legend says it stands for Phra Mokkalana, one of the Buddha’s major disciples. According to legend, the reclining Buddha was built more than 2,000 years ago when King Si Khottabun of Vientiane restored Phrathat Phanom and hosted celebrations. A group of Khmer people, led by a man named Sa, travelled to the celebrations, but failed to get there in time. They decided to bury all the money and valuables destined for merit-making and carved the statue of Phra Mokkanlana at Phu Khao instead. 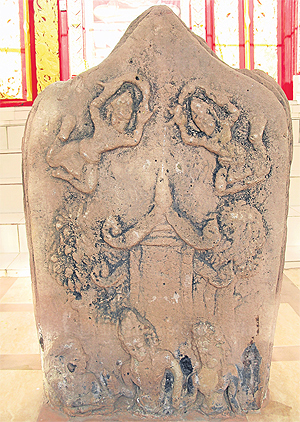 Wat Nua, or Wat Sri Boon Ruang, in Muang Kalasin boasts eight sema stones from the Dvaravati period. They are believed to have been brought from Fa Daed Song Yang Ancient City. Only one of the eight sema stones at Wat Nua is carved showing architecture and traditional clothes of people at that time, but no specific story can be reaffirmed. The rest are plain. 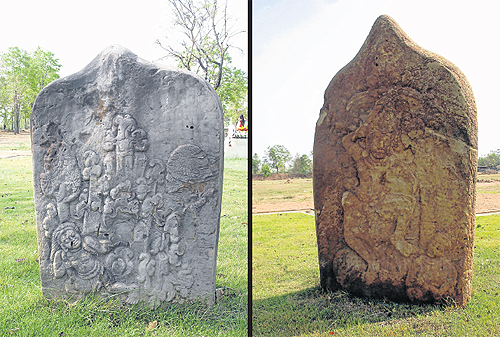 Most of the sema stones found at Fa Daed Song Yang are made of either red or white sandstone. Two important ones found near Phrathat Yakhu depict Bhuridatta Jataka and Mahosot Jataka. The first one shows Brahmin Arampai pulling the naga Bhuridatta near a termite mound and trees. The naga Bhuridatta was one of the Lord Buddha’s previous lives. The second stone portrays a scene from Mahosot Jataka, when Mahosot was pretending to kill King Chullaneewas with a sword.

Situated at Ban Sema opposite the entrance of Fa Daed Song Yang Ancient City in Kalasin, Wat Phochai Semaram, or Wat Ban Kom, displays many sema stones collected from Fa Daed Song Yang. The carved stones are kept in a temple building while many others, which are not carved, were erected in the front yard of the temple near the northern wall. Among the carved sema stones is one depicting Phra Mahosot answering a king’s questions in the presence of a goat and dog. The faces, eyes, noses, mouths, costumes and accessories of sculptures on these sema stones are localised. The way their legs are crossed loosely and motifs like that of phak kood, local vegetables, are unique to the area. Also displayed in the temple compound is a replica of a carved sema stone called Pimpa Pilarp. The original was moved to the Khon Kaen National Museum. It portrays a seated Lord Buddha and his former wife Pimpa Yasathara showing him respect by wiping his feet with her long hair. Another outstanding one is the model of the sema stone depicting the Lord Buddha being requested by his son Rahul to give him his throne and fortune. 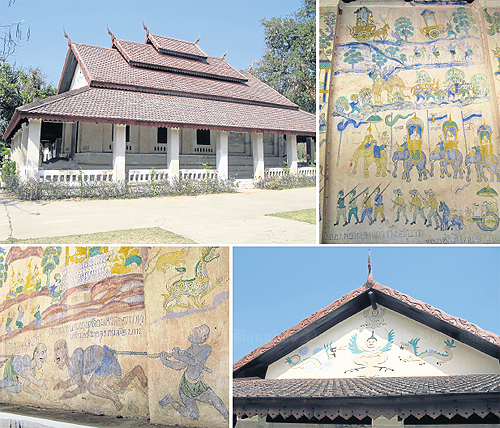 Wat Udom Pracharat in Muang district of Kalasin does not date back to the Dhavaravati period but it is well worth a visit. The temple has an ubosot (ordination hall), or sim in the Isan dialect, that was registered as a historic site in 1998. It was built of bricks and has a threetiered roof. It reflects the influence of Vietnamese art since many Vietnamese people, including skilled carpenters and stucco artisans, migrated to the northeast of Thailand after world wars I and II. This ubosot has arched windows and doors, fresco art on the roofs and windows and naga sculptures upon staircases. The front gable is decorated with fresco art in the images of the Garuda and two dragons. Outstanding is hoop taem, or mural paintings, painted in 1933. Hoop taem mostly depict folk tales and the Lord Buddha’s previous lives, blending local lifestyles and art. In the Northeast, murals are painted on both the exterior and interior walls. The use of colours focuses on blue, yellow, green and white. The exterior murals portray maha vesantara jataka and boon phaves, especially the procession of Prince Maha Vesantara back to his city. The interior murals, including those behind the Buddha statue, depict the Lord Buddha’s life starting from the right to left side with Prince Siddhartha’s departure from his palace to the Lord Buddha conquering the Mara. Some of the murals mix details of local culture, such as hua larn chon kan (head-hitting games between bald men), funerals, boar hunting, modern soldiers and local costumes. 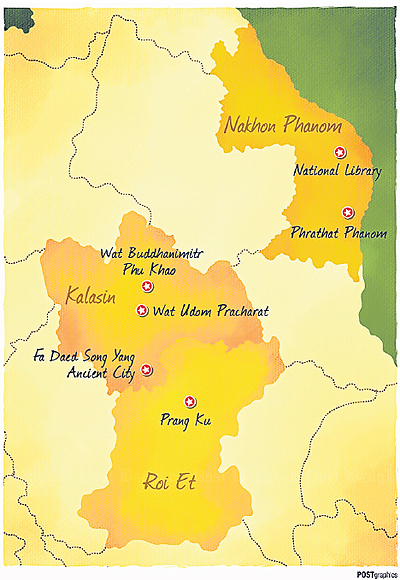