The Tourism Authority of Thailand (TAT) and its subsidiary Thailand Privilege Card have joined hands to relaunch the Thailand Elite Card with new privileges to cope with operational loss. 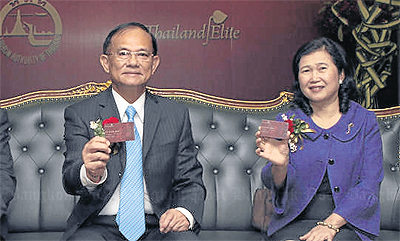 This month, the privilege membership returns to the market with high hopes of attracting high-income tourists.

"There were some key adjustments according to the change of business environment and consensus of the cabinet, including privileges," said Vilaiwan Twichasri, deputy governor of TAT and the acting managing director of TPC.

Under the new conditions, cardholders will be able to join for an initial down payment fee of 2 million baht, followed by a 20,000 baht annual fee over a 20-year validity period. Cardholders will be eligible for a five-year multiple entry visa and a one-year stay privilege per visit.

Other privileges include an option to request a Thailand Elite Personal Assistance at Suvarnabhumi and Phuket airports, including a fast-track channel at the immigration counters and airport transfers by BMW 7-series limousines. They will also have a 24-hour call centre access for any special assistance, privileges in the usage of five-star golfing and spa facilities 24 times per year.

About 1,300 new members are the target within the first 12 months after the relaunch. The target groups are visitors from China, Hong Kong, Taiwan, India, Russia and Asean countries.

The United Nations World Tourism Organization (UNWTO) is accepting nominations for the 2013 Awards for Excellence and Innovation in Tourism.

Launched a decade ago, the awards consist of three major categories: the UNWTO Ulysses Prize for a scholar who has outstanding contributions to innovation and knowledge in tourism, the UNWTO Award for Lifetime Achievement and the UNWTO Ulysses Awards for Innovation for those who are in public policy and governance, enterprises, non-governmental organisations and research and technology.

The awards are open for worldwide applicants. The last date for submitting the application is on Oct 1. The Awards ceremony will take place on Jan 22 next year during the Madrid International Tourism Trade Fair.

- JAL has installed more fully-flat seats in business class of its international flights.

The new 24 seats are designed for the Boeing 767-300ER fleet. Each seat can be 180-degree reclined to 2m in length and 52cm wide. The layout for seats will be the 1-2-1 configuration in a row to provide passengers direct aisle access. In addition, the airline will also upgrade its economy class seat with 5cm more width and 10cm more legroom. A total of 175 seats will be available in a 2-3-2 configuration.

The new passenger seats will be launched for flights between Tokyo and Vancouver in December before expanding to some long-haul Southeast Asia routes and Honolulu routes by fiscal year 2014.

- Air China has cooperated with selected travel operators to launch the "72-hour visa-free stay" excursion packages in Beijing and Shanghai.

The programmes can offer transit passengers a one-day city tour.

In Beijing, the tour includes a visit to the Forbidden City, the Great Wall, the Summer Palace, Sanlitun Bar Street and the old Hutong neighbourhoods, with a chance to enjoy a lamb hotpot and the famous Beijing duck.

The programme in Shanghai includes a wander in Yuyuan Garden, Chenghuangmiao bazaar, Shanghai's old streets for culinary delights, Nanjing Road, the Oriental Pearl Tower and the historic buildings on the Bund.

"This announcement clearly demonstrates our commitment to expand the Dusit portfolio on a global basis, and our strategic plan to establish and strengthen our presence in key gateway cities, particularly within the Middle East," he said.

The new hotel in Doha will be the company's sixth hotel in the Middle East. The hotel will be located not far from shopping malls, Doha Exhibition Centre and the upcoming Doha International Conference and Exhibition Centre, which will make it appeal to both short and long-stay guests travelling for leisure or business, he added.

"We are very excited for this resort to join our Anantara portfolio, the second in Vietnam," said Dillip Rajakarier, CEO of Minor Hotel Group, Anantara's parent company.

"Having acquired the Life Resorts brand at the beginning of this year, we now have a total of four properties in the country and we are also looking forward to rebranding our resort in Quy Nhon to Avani, a sister brand to Anantara, later in the year."

Located about 35km from Danang Train Station and Danang International Airport, the Anantara's boutique hotel features two- and three-storey colonial style buildings with French, Dutch, Chinese and Japanese architectural influences. It offers 93 guest rooms and suites, each has a raised floor for a bedroom and bathroom while the lower floor is designed for a lounge, a porch with day beds, and either a garden or river view. Other facilities include a spa, swimming pool and five dining outlets.