Thais flock to land of the rising sun
Travel

Thais flock to land of the rising sun

The number of Thai visitors to Japan is expected to hit more than 300,000 this year after the 15-day visa waiver took effect on July 1. 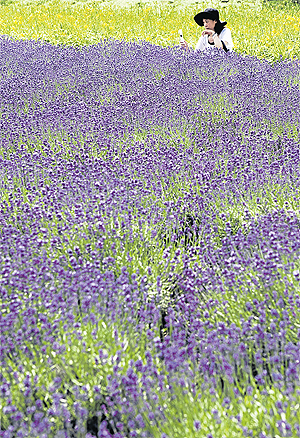 Summertime in Hokkaido is full with flowers.

According to Kasikorn Research Centre, the announcement was part of the Japanese government's attempt to attract more international tourists, especially Thais and Indians after the decline in the number of Chinese tourists since last year.

The aim is to get 18 million visitors in the next three years _ about a 115% increase from last year's 8.37 million visitors. Thais are the top visitors from Southeast Asia and the sixth-largest group of travellers after South Koreans, Taiwanese, Chinese, Americans and people from Hong Kong.

According to the research centre, the attempt to gain more Thai visitors started after the tsunami hit the country in 2011. Since June last year, the Japanese government started issuing multiple entry visas for Thai tourists and also reduced the time it took to get a visa by half, from a week to three or four days.

According to figures provided by the Japan National Tourism Organisation (JNTO), the total number of Thais visitors to Japan has increased steadily in recent years, except for 2011.

It is highly likely that the number of Thai visitors this year will be higher than 300,000.

The Association of Thai Tourism Agents (ATTA) even forecasts that the number might hit almost 400,000 and could reach 500,000 next year, according to ATTA secretary-general Charoen Wangananont.

Half of those are expected to be first time visitors while repeat visitors will account for a third.

Prices of tour packages to Japan might be reduced at least 5-10% due to the visa fee exemption. The average cost of a four-day package, which is a popular length of stay among Thais, might go down to 32,000 baht, the same level as package tours to South Korea and China, he said.

"The visa waiver will make it easier for Thais to go to Japan, which is one of the top favourite destinations among Thais," he added.

Called Ripley's Sky Rider, the service features a large tethered helium balloon 72m in diameter. It can carry up to 30 passengers and fly 150m above the ground for 10-15 minutes.

The service offers passengers a 360-degree view of the city and it is the eighth attraction after Ripley's Believe of Not!, Haunted Adventure, 4D Movie Theatre, Infinity Maze, Louis Tussaud's Wax Works, Scream Dark and the Vault laser maze challenge.

- Emirates has been named the world's best airline at SkyTrax's World Airline Awards 2013.

The 11-month survey was conducted online between July last year and May, during which time more than 18 million customer surveys were completed. The survey is based on measuring customer satisfaction for passenger experience, across both airport and onboard environments, including check-in, boarding, seat comfort, cabin cleanliness, food, beverages, staff service and associated travel items.

- Cebu Pacific will launch direct flights between Manila and Phuket on Aug 16.

Using an Airbus A320, the airline will operate three flights a week _ on Monday, Wednesday and Friday.

- Centra Central Station Bangkok hotel had a soft launch this month and will officially open later in the third quarter of this year.

Located on Trai Mit Road and not far from Hua Lamphong station, the mid-range hotel features 150 rooms and suites with options of usage space from 28m2 for Superior and Premium room types to 64m2 for a suite. Other facilities include a fitness centre, a spa, three food outlets and meeting rooms and facilities.

- Amari Atrium Bangkok will be re-branded as Avani next year.

The 23-storey hotel on New Phetchaburi Road will be managed by Minor Hotel Group (MHG) and will undergo extensive renovation including 568 guest rooms and public areas such as meeting rooms and restaurants, according to group CEO Dillip Rajakarier.

"Taking over the management of this well established city centre hotel will be a great launch platform for our new Avani brand in Bangkok," he said.

Avani Hotels & Resorts is the new hotel brand which was launched by MHG in 2011 to complement the group's five-star Anantara brand.

Two Avani resorts are already open in Sri Lanka, and two more will join the portfolio later this year, in Quy Nhon, Vietnam and in Sepang, Malaysia.