A town of diverse culture
Travel

A town of diverse culture

Even if you only have a day to spend in Nakhon Phanom, it is possible to see some of the province's most revered temples and beautiful old buildings. The province, situated about 700km northeast of Bangkok, is a melting pot of cultures, with historic influences from the Thai-Lao, Yo, Phuthai, Kui, So, Kaloeng, Khmu, Saek, Thai-Chinese and Thai-Vietnamese peoples. 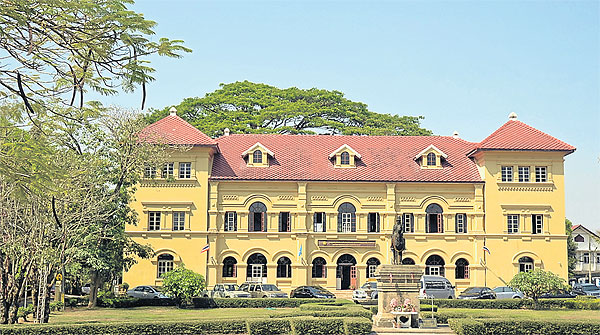 According to the 10th Regional Office of Fine Arts, present-day Nakhon Phanom is on land where people settled from prehistoric times to the Rattanakosin period. Traces of prehistoric human settlement were found near the Kam, Oon and Yam rivers. To the east near the Mekong River, are historical sites from the Lan Chang (ancient Lao Kingdom) and Rattanakosin periods and Western-style architecture with the influence of Vietnamese art.

In Muang district, visitors should see Wat Maha That, Wat Okat and HM Queen Sirikit's Golden Jubilee National Library. Established in 607AD by the Mekong River, Wat Maha That, formerly Wat Ming Muang, boasts a pagoda enshrining the relics of an Arahant (an enlightened monk). The temple was renamed after the main pagoda _ Phra That Nakhon _ was built between 1920 to 1922. Phra That Nakhon looks like the original Phra That Phanom in the style of Lan Chang art. It is 24m high and its base has four, 4.85m-wide sides.

In the past, Wat Maha That was a royal temple where ceremonies were held for Siamese officials in Nakhon Phanom who took the oath of allegiance. Its ubosot (ordination hall) boasts a Buddha statue named Phra Ong Saen, believed to bring victory, power, successes, safety and happiness to worshippers. The nearby temple is Wat Okat. It is believed to have been built during the times of the Sri Kottabun Kingdom, before the Lan Chang Kingdom in Laos. Its vihara (prayer hall) houses two sacred Buddha images named Phra Tiu and Phra Thiam. Legend has it that these wooden images of the Buddha subduing the Mara floated across the river from Laos in the Sri Kottabun period. Each year on the Full Moon of the sixth lunar month, a bathing ceremony is performed for these two images. 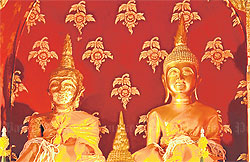 Not far from both temples is HM Queen Sirikit's Golden Jubilee National Library, Nakhon Phanom. This yellow, three-storey brick building was constructed in 1915 in Renaissance style. Combining European and Thai architecture with wooden floors and staircases, it was registered as an historical building in 1976 and served as the provincial hall until 1980. The building was restored between 1990 and 1994 and has been a branch of the National Library since June 1994. In 1997, it was named Thailand's best-conserved building.

About two hours' drive from Muang district is Phra That Phanom, the province's most sacred place, in That Phanom district. The construction of Phra That Phanom is mentioned in the book Tamnan Urankathatu (Legend Of The Lord Buddha's Breastbone Relic), depicting the Lord Buddha's visit to the Mekong River Basin and the later arrival of his breastbone relic. Phra That Phanom was constructed by 500 Arahants, led by Phra Maha Kasapa, eight years after Lord Buddha's passing, about the 6th century BC. It was initially in the shape of a four-sided kiln and about 8-10m high.

For centuries, Phra That Phanom has been a pilgrimage destination among Buddhists from all over Thailand and Laos. The annual merit-making festival takes place there in the third lunar month or in late January or February. It is said that worshipping Phra That Phanom will bring joy and peace of mind and even rebirth in heaven after death.

From dawn until dusk, tourists can see the beauty of Thai, Lan Chang and European architecture and art due to their proximity and convenient routes in this northeastern province.

If you wish for more information about travel to Nakhon Phanom, call the Tourism Authority of Thailand's contact centre on 1672. 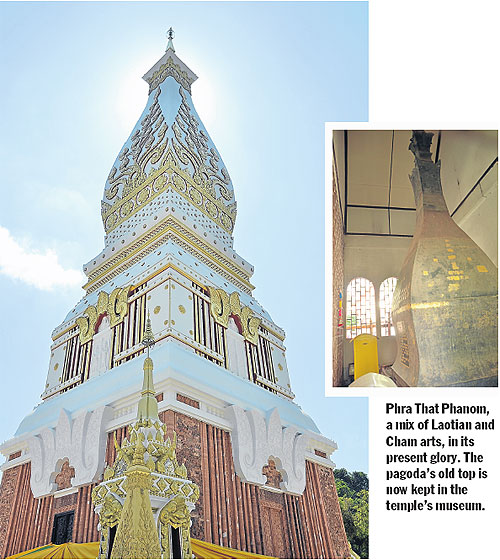