Despite the fact that armed conflict between Myanmar's government and the New Mon State Party ended 18 years ago and that Kyaiktiyo Pagoda, also know as the Golden Rock, has long been a popular place of pilgrimage, it is only recently that the tourism-industry limelight has begun to shine on the lower section of Mon State which hugs the eastern side of the Bay of Martaban. 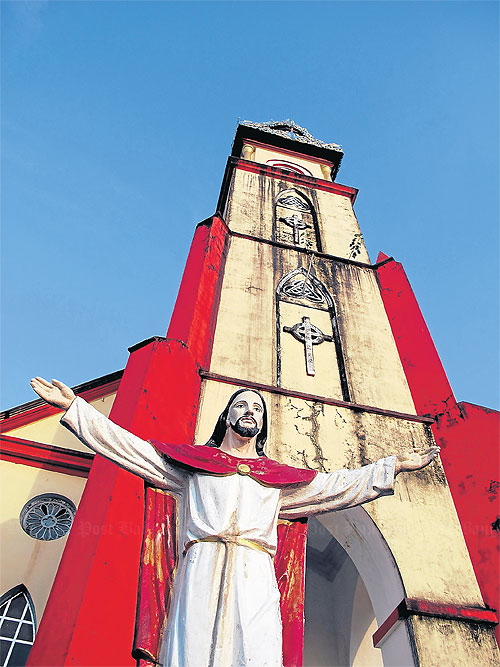 St Patrick’s Church in Mawlamyine is one of the more prominent examples of European architecture to have survived from the time of British rule. A century ago, Chao Noi Sukkasem, a 16-year-old scion of the royal family that then ruled Chiang Mai, was sent here to attend boarding school. Somewhere in the town, which back then was known as Moulmein, the young man met Mamia, a Mon commoner who became the love of his life. After graduation, he took her back with him to Chiang Mai only to face the strong disapproval of his elders who had already chosen another woman for him to wed. Forced to send Mamia back to Moulmein, the prince was devastated by his loss. He began to rely heavily on alcohol, dying when he was only 33. Mamia, meanwhile, became a Buddhist nun and lived a life of religion until she passed away at the grand old age of 75. The couple’s tragic love story was later immortalised in a song, named after the Mon lady, composed by the late Charan Manophet, a legend in Lanna folk-music circles and a national artist. Apart from St Patrick’s, there are several churches for other Christian denominations in the town that date back to the colonial period, as well as a huge prison, buildings designed as offices and residences for both imperial officials and British businessmen, plus those occupied by their Indian subordinates and employees, both Muslim and Hindu, who also had their own places of worship in the town.

With a new air link between Mawlamyine, capital of Mon State, and Mae Sot, the border town on the western edge of Tak province, getting to Mon State from Thailand is easier than ever before. But convenient travel links are far from being the only reason you should include Mawlamyine (formerly known as Moulmein) in your holiday plans.

To gain a little perspective, let's make a quick trip back into the past, a distant past indeed.

Even before the Bamar (Burmese) established the Bagan Empire in the 11th century, the Mon people were the dominant power in much of what is now lower and central Myanmar. However, with the rise of the Bamar, the Mon were faced with a formidable rival. Over the centuries that followed the two ethnic groups alternated in power, in a cycle of conquests and defeats.

In the end, as we all know, the Mon lost ground and are no longer the dominant political entity. But, as far as culture is concerned, one might say that they have always been the real victors. Mon influences are evident in many forms of Burmese art and especially in religious architecture. For example, the Shwedagon Pagoda in Yangon (formerly Rangoon), today the republic's most important religious site, was originally constructed by Mon people and subsequently, no matter who ruled Yangon _ the Mon or the Bamar _ and no matter how many times it was renovated or even rebuilt, this awe-inspiring stupa, like numerous others scattered across the country, has maintained its intrinsic Mon style.

Now the fourth largest city in Myanmar (after Yangon, Mandalay and the new capital, Nay Pyi Taw), Mawlamyine also boasts a host of Mon-style pagodas. Most of the important ones are located on a hillock in the northern part of town. Among these are the Kyaik Than Lan, the most revered pagoda of all; and the Maha Muni Pagoda where you'll find a fine replica of Bagan's famous Maha Muni Buddha image. On the same knoll, another place worth stopping by is the monastery of Yadanarbon Myint which houses a collection of decorative wood carvings, including a reproduction of the Lion Throne, seat of Myanmar's last king in Mandalay.

Within a couple of hours' drive of Mawlamyine, interesting attractions include the gigantic reclining Buddha image, more than 180m long, at the Win Sein Meditation Centre. Farther south, the Kyaikkami Yele Pagoda in Kyaikkami is a complex built on coastal mud flats that becomes an island at high tide. On the way there you'll pass the village of Thanbyuzayat, the western end of the infamous Death Railway built by POWs and Asian slave labourers during World War II to ferry Japanese troops and supplies from Thailand's Kanchanaburi province. Nearby is a cemetery containing the graves of thousands of Allied prisoners of war who died building it.

And that's just the tip of the iceberg. Mon State, with its wealth of history and culture, has many more hidden gems sure to intrigue those willing to do a little exploring. 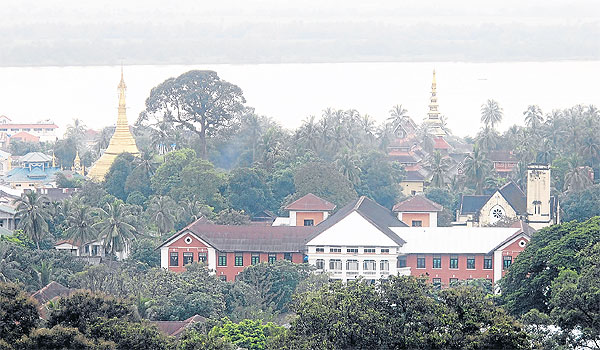 From the hill where Mawlamyine’s most sacred site, the Kyaik Than Lan Pagoda, is located, the tops of colonial-era buildings and Buddhist stupas can be seen peeping through the lush canopy of trees. The same vista may once have been enjoyed by the writer Rudyard Kipling who, in one of his best-known poems, Mandalay, first published in 1892, wrote:

‘‘By the old Moulmein pagoda, lookin’ lazy at the sea There’s a Burma girl a-settin’, and I know she thinks o’ me.’’ 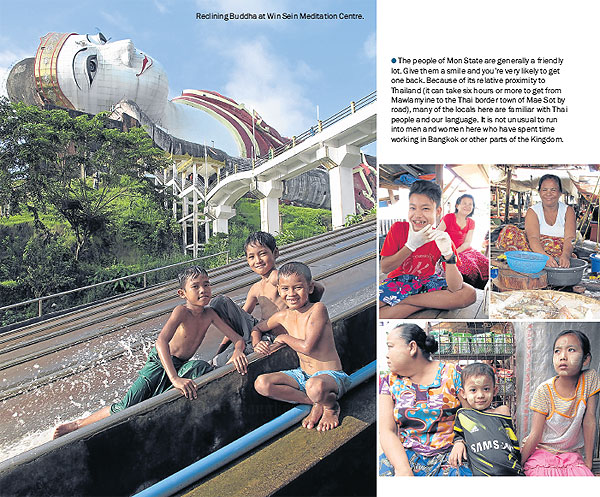 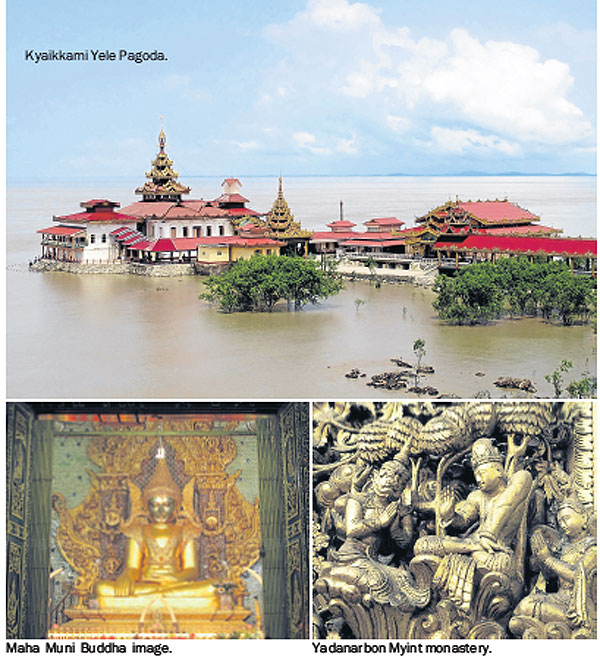 For visitors to Myanmar, religious sites always feature high on must-see lists and there are several interesting Buddhist monasteries and pagodas to be seen in Mawlamyine and its environs. Within these sacred precincts one is required to dress in a polite fashion and respect local customs. Socks as well shoes must be removed before entering any of the buildings. 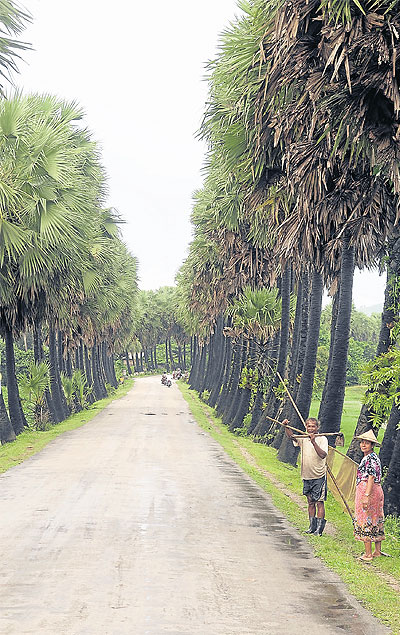 Palm trees planted in rows on both sides of the highway is an indication to travellers that they are approaching a town. 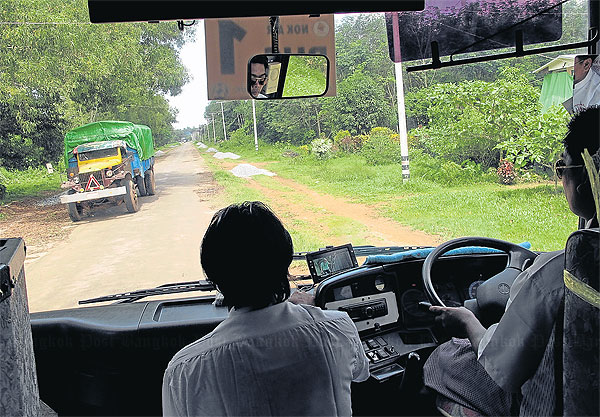 As in the rest of the country, people in Mon State drive on the right-hand side of the road, the direct opposite of the practice in Myanmar during colonial times. However, many of the vehicles still in use here were designed to be driven on the left-hand side of the road. So be extra careful every time you alight from a bus because the doors are not on the side facing the footpath and you risk being hit by cars and motorcycles following behind. 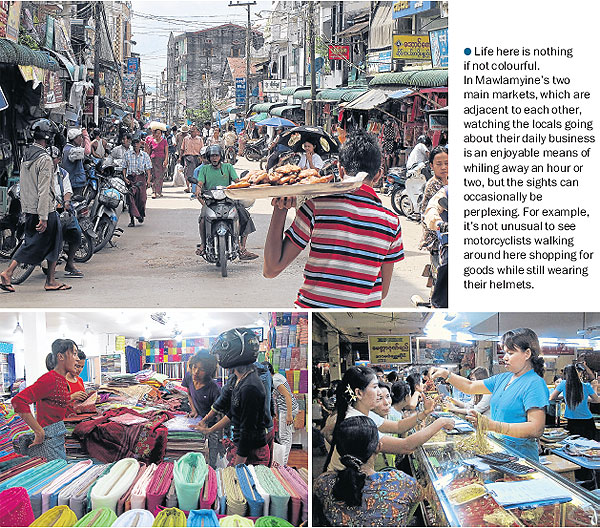 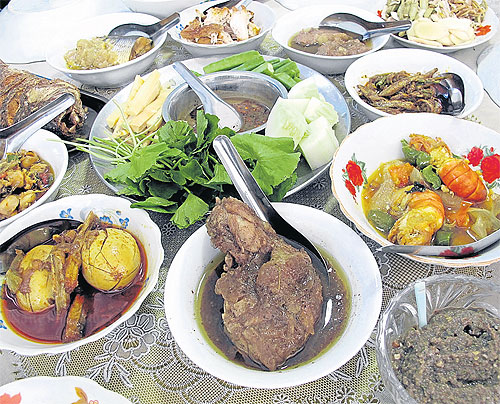 Like Thais, Myanmar people serve their food with rice. But most of the dishes I sampled here, and those in Mon State were no exception, were extremely oily. Although there are some decent restaurants to be found, some of which also offer seafood dishes that will appeal to Thai taste-buds, it would be wise to take along some driednam phrik from home, just in case you crave something hot and spicy. At many eateries, hot tea and little chunks of palm sugar are available free of charge for patrons to wash down the greasy meal they’ve just 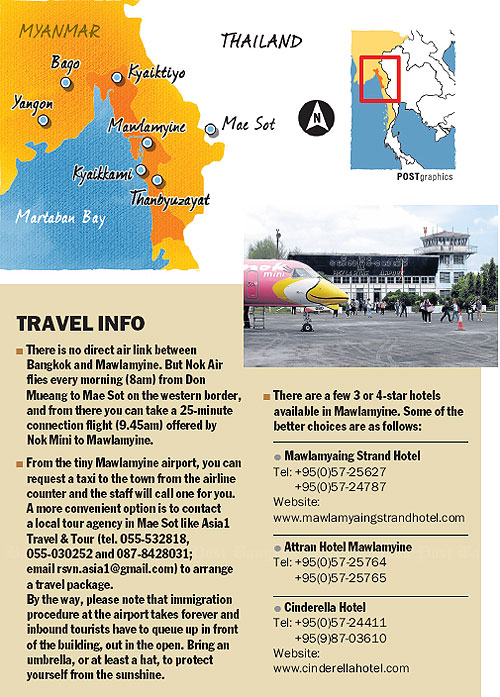