Reports of the devastation caused by the Chiang Rai quake have been greatly exaggerated; take advantage of the current dearth of tourists by making a visit now

The 6.3-magnitude earthquake that shook Chiang Rai in early May caused superficial damage in areas close to the epicentre, but alarmist reports recommending that tourists avoid the place completely can be ignored. Thailand’s northernmost province remains in good shape with venues that attract culture-vultures and art aficionados continuing to fascinate and a privately owned park about to expand its recreational facilities.

“When the earthquake hit and damaged the temple, I knew it was an opportunity to make a fresh start,” Chalermchai Kositpipat told reporters at a press conference called recently to discuss the fate of Wat Rong Khun, the stunning, all-white temple this national artist has devoted over 20 years of his life to building just outside Chiang Rai town.

“News about the earthquake spread throughout the world. Now the world knows all about Chiang Rai and its attractions,” he  enthused. 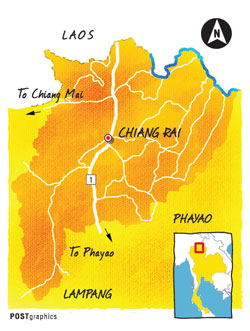 - The Tourism Authority of Thailand’s local office provides plenty of information on things to see and do here. Call 053-717-433.

Chalermchai has committed himself to finding the funds to carry out a complete restoration, but repair work has yet to commence. Cracks in religious murals and structural damage to some buildings in the compound have necessitated their temporary closure, but tourists are still flocking to Wat Rong Khun, some for the very first time after being alerted to its architectural beauty by all the post-quake publicity.

Graphic images of the worst after-effects of the tremblor were widely circulated on social media, giving an exaggerated impression of the extent of the destruction. But after roaming around Chiang Rai recently I can assure you that the damage has been minimal and is mostly limited to southern parts of the province, to the districts of Phan, Mae Lao and Mae Suai in particular. In fact, if I hadn’t known about the quake in advance, I probably wouldn’t have noticed anything out of the ordinary.

I headed to the far north, to Mae Salong, a large community built on the slopes of the doi (mountain) of the same name in Mae Fah Luang district. It was here that soldiers of the anti-communist Kuomintang army sought refuge after their defeat by the forces of Mao Zedong in 1949. Their descendants, now mostly Thai citizens, still live here in this highland area famous for its tea plantations, many of which now open their gates to welcome visitors in search of tranquillity and picturesque scenery.

In the main market here it was business as usual, with numerous stalls offering dried tea and tea products of all kinds, exotic dried fruit and imported foodstuffs used in Chinese cuisine. The only difference was that the place wasn’t as jam-packed as I remembered it from my last visit — many potential visitors seem to have been scared off by news of the quake — with the result that this fascinating bazaar was a breeze to walk around and I was even able to find a parking space very close by.

“Doi Mae Salong is quite far from the epicentre, so there was nothing damaged here,” a merchant cheerfully explains as she busily sorts tea leaves in her shop. “What we are really afraid of here, actually, is heavy rain; it cause landslides on the mountain, you see.”

The lack of crowds also makes exploring Chiang Rai town a much more pleasant experience at this time, particularly for art lovers who usually shun the place during the high tourist season.

The first venue I wanted to check out was Baandam Museum, the brainchild of another well-known national artist, Thawan Duchanee. Using parts from a wide array of animals — skin, bone, teeth — and handmade wooden tools from the locality, he has fashioned an impressive collection of artworks, featuring his own idiosyncratic take on the tribal look blended with traditional Lanna style. Once again overblown accounts of earthquake damage had kept many would-be visitors away, ideal conditions for anyone who savours lots of peace and quiet as they admire objects in a repository of art like this. Baandam (“the black house”) is Thawan’s portrayal of hell, making it the direct opposite of Wat Rong Khun whose gleaming, ice-castle surfaces have caused it to be nicknamed the White Temple.

Doy Din Daeng, which translates as “red clay hill”, is one of the best spots in Chiang Rai to find high-quality ceramic art. Trained in Karatsu, on the Japanese island of Kyushu, as well as in his native Thailand, Somluk Pantiboon, yet another national artist who has chosen to live in these parts, set up this pottery studio back in 1991 to develop his own moulding, glazing and kiln-baking techniques. His contemporary ceramic art reflects nature and his impressions of the life that surrounds him here in Chiang Rai.

Nestled on a peaceful hill not far from Baandam, this studio seems like an ideal place to contemplate and create. I stroll around watching artisans shape mounds of clay set on pottery wheels or feed finished pieces into an oven. There are only a handful of visitors to be seen; a few are sipping coffee and enjoying the tranquillity, others are wandering around the retail outlet attached to the studio, looking for beautiful vases, cups and other vessels to take home.

For those who are looking for an escape into lush natural surroundings, a taste of the great outdoors, Singha Park, a short drive from downtown Chiang Rai, is quite an interesting option, impressing most with its landscaped grounds. Once a farm growing barley for the production of  beer, it has now been converted by its owners, Boon Rawd Brewery, into a recreational space and named after its original brand of beer. It boasts fields planted with flowers, sweeping meadows, a small zoo, a restaurant, hydroponic vegetable farms and even a coffee shop. Very soon, the park will be attracting even more energetic holidaymakers when the management opens several additional bike routes, a rock-climbing tower plus a series of zip-lines to take the adventurous on thrilling rides over a local tea plantation.

“Want to come along?” Sorattaya Markprasert, a staffer at the park’s Sport and Recreation Centre, asks, inviting me to go take a look at one of the zip-lines she is testing in the run-up to the opening of the facility.

I’ve had some previous experience of zip-lines in northern Thailand, most of them being cables of 100-200m in length which are anchored to the trunks of big trees. But here, at Singha Park, there will be four separate stations located on different hills, all linked together. And the cable sections are more than 300m in length.

Suspended from the zip-line by her safety harness, Sorattaya jumps from the platform of one of the stations and proceeds to soar above the neat green rows of tea bushes heading towards another hill in the distance. For her, this is routine, a task she’s been doing every day to ready for the grand opening at the end of this month. As Sorattaya checks the system to make sure everything is in its proper place, she, too, is aware of an impending debut, a fresh start that’s sure to bring all the tourists flocking back to Chiang Rai.