Buddhist pilgrimage with a difference
Travel

Buddhist pilgrimage with a difference

As a producer of dhamma TV programmes, Somnuek Khemacheeva has visited holy Buddhist sites in India several times as part of her work. As a devout Buddhist practitioner, however, she found the so-called “pilgrimages” that millions of Buddhist Thais make each year to India are quite spiritually superficial. 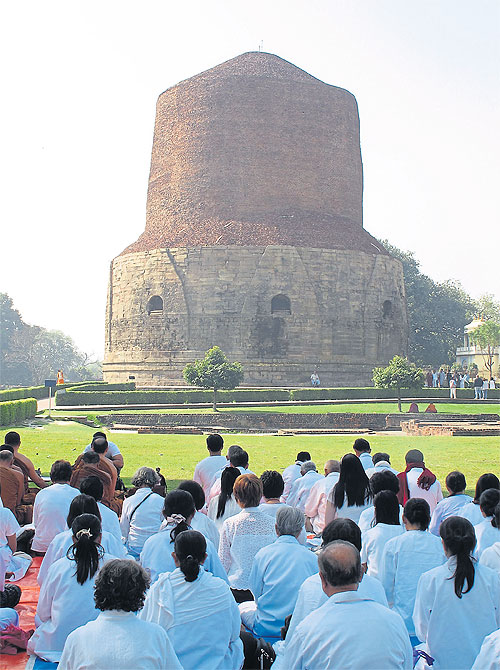 Taking a long look: Pilgrims at the Dhamek Stupa at Sarnath, India, where the Buddha delivered his first sermon.

“I call them cha-ngok tours,” she said warily. Cha-ngok means craning one’s neck to have a quick glimpse of something.

All four holy sites — the places where the Buddha was born, attained enlightenment, gave his first sermon and passed away — were far from one another in rural India and Nepal with little modern amenities. The pilgrims must therefore rely on tour companies which usually provide a Buddhist monk to lead prayers and merit-making ceremonies.

“After a long and arduous journey from one site to another, the pilgrims have very little time at each place. They can only take a quick look, get a short briefing from the monk about what the Buddha did there, then pray and make offerings quickly before rushing to other places to repeat the same speedy ceremonies at other sites,” Somnuek said.

“There should be a different way to do our pilgrimage. We should be able go beyond rites and rituals and deepen our spirituality, as pilgrims should.”

A few months ago, she gave me a call. “Here’s the Buddhist pilgrimage with a difference. Come join me, and you won’t be disappointed.”

She was absolutely right. 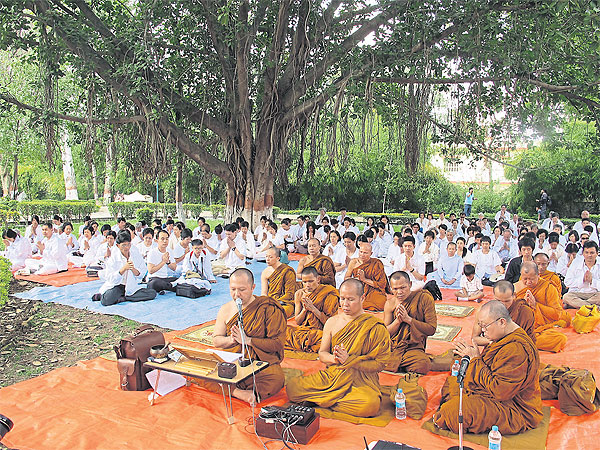 Deep reflection: Left, group meditation at the Venuvana Bamboo Grove, where the Buddha gave a sermon on Makha Bucha Day.

“The Buddha gave many important teachings at those holy sites. Once we’re there, we should then listen to the Buddha’s teachings in his very own words and contemplate on them,” said Phra Paiboon Abhiboono, who organised the pilgrimage.

Sounds very simple, doesn’t it? But I found the impact of sitting still, closing my eyes to watch my breathing while contemplating the words of the Buddha in the place he delivered them extraordinarily powerful.

The trip was made during the height of the tense political stalemate in Bangkok. Surprisingly, the words the Buddha delivered more than 2,000 years ago did not only talk to me on a personal level — how to deal with my anger, greed and delusion — but were also relevant to Thailand’s political conflicts, which are rooted in hatred and desire to eradicate enemies. 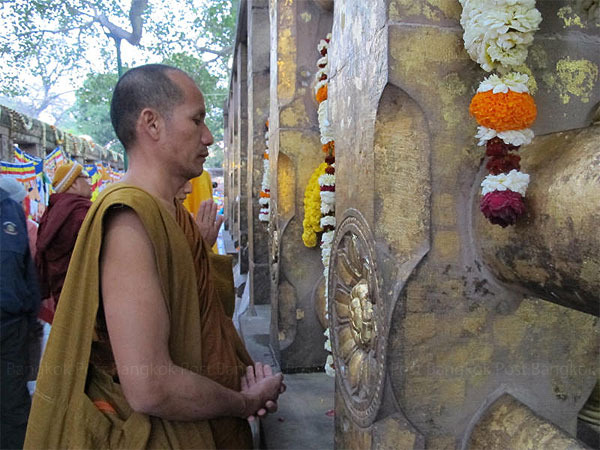 “The causes of human suffering have not changed,” noted Phra Paiboon, 39, director of Don Hai Sok Forest Monastery’s meditation centre. An engineer by training, he left his promising career in Singapore to become a monk nine years ago.

As an organiser, he selected the Buddha’s teachings from the sutta to be read and chose the places for group sittings at each holy site. He also read the Buddha’s words to the pilgrims himself while they meditated.

In pilgrimages organised by tour companies, the long hours in the tour coaches between each sacred site were filled with the life history of the Buddha, if not long naps. For me, it was pretty much like going back to primary school Buddhism classes again.

In this trip, the pilgrims were asked to do what meditation practitioners should do at all times — be mindful and meditate.

Actually, they were asked to refrain from talking to one another until the last day of the trip and focus on breathing meditation — the same way they do in a meditation retreat. Recordings of meditation guides by Luang Por Sa-ard Thitopaso were played in the coaches throughout the trips.

“Be mindful. Observe the breathing,” is the similar message repeated in his different meditation guides.

The calming effect does not only help deepen the meditation at holy sites. Equally important, if not more, is how it helps give us the much-needed equanimity when faced with myriad unpleasant sensory experiences during the trip — from having to relieve oneself in open fields, the toilet stench, unfamiliar food and aggressive begging, to the sorrowful eyes of small, hungry children that fill one with overwhelming guilt.

After all, the goal of dhamma practice is to train ourselves so that our reactions are no longer shaped by likes and dislikes, isn’t it?

The first site for the group sitting in the 10-day pilgrimage was the Mahabodhi Temple in Bodh Gaya in the state of Bihar. From where I sat near the holy Bodhi tree where the Buddha attained enlightenment, I saw a seemingly endless crowd circling the holy tree amid competing noises from prayers in different languages and a cacophony of the drums and bells.

All the noises seemed to be just that — noises — without annoying me when I closed my eyes to focus on the sutta in which the Buddha shared his spiritual trials and errors. I listened to why he decided to shift from the extremism of self-torment to the Middle Path, how he described what happened during deep meditation until he attained enlightenment, how he was hesitant to share the natural laws he had discovered, and when he decided to do it out of boundless compassion.

It was like listening to the Buddha speaking right in front of you, sharing his personal story with you, showing you the way.

There was also a part when, shortly after his enlightenment, the Buddha announced that he would not leave this world until the bhikkhus, bhikkhunis (monks and nuns), and male and female lay practitioners were firm in the practices. I was sure I was not the only woman there who felt a surge of deep gratitude.

The next stop in our pilgrimage was the Gridhakuta Hill, or Vulture’s Peak, in Rajgir, where the Buddha resided for many years. 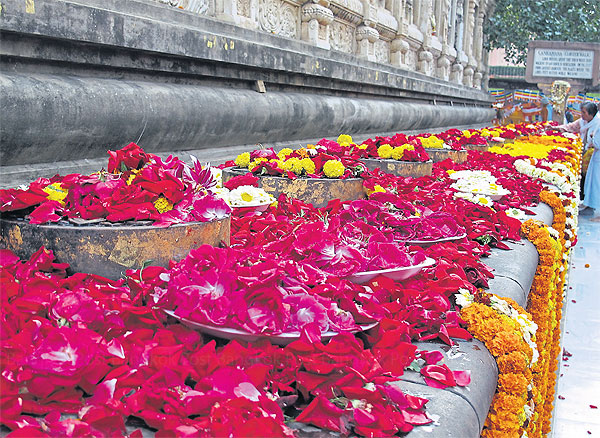 Colourful offering: Flowers and garlands are laid at the Mahabodhi Temple.

There, we listened to the sutta in which the Buddha discussed how attachment to views and beliefs creates conflict. His message: Whatever we hold as right or wrong views, the understanding that all are impermanent and subject to change when concerning factors change will help us relinquish attachment to those views and avoid conflicts.

The same holds true with our emotions and feelings. Said the Buddha:

“Be they pleasant, unpleasant or neutral, they are all impermanent, conditioned, dependently arisen, subject to destruction, vanishing, fading away and ceasing.”

Seeing this reality, one’s mind is free from dependence. As a result, said the Buddha:

“One sides with none, disputes with none; he employs the speech currently used in the world without adhering to it.” 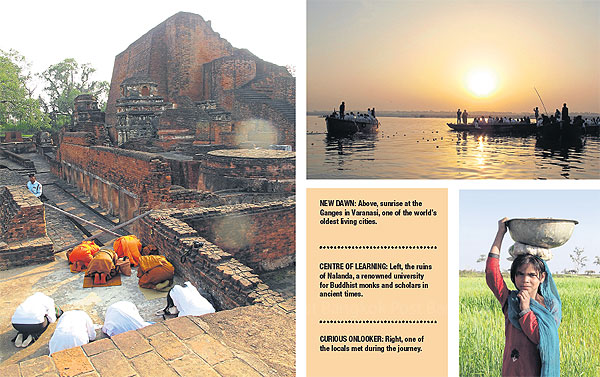 Listening to his words, I could not help thinking how our deep political conflicts show how far away we are from his teachings.

At nearby Venuvana Bamboo Grove, the first Buddhist forest monastery, I was brought back to what really matters in one’s lifetime as a Buddhist. In the group sitting that took place under the cool shade and protective umbrella of a huge tree, we contemplated how to not stray from the goal of dhamma practice. His advice:

The message: All these intellectual and philosophical questions are irrelevant if our goal is to end suffering. This is what we should do:

“Reflect on suffering, how it arises, how it ends, and the way leading to cessation of suffering.”

We also contemplated the Buddha’s caution against anger:

Again, my monkey mind went back to the politics of hatred and revenge back home. Should we stop calling ours a Buddhist country when we turn our backs to his words?

As the power-grab games went on in Bangkok, we arrived at Nalanda. A once glorious university that used to house more than 10,000 monks is now mere ruins. The university was destroyed by a Muslim army in the 12th century.

“Instead of feeling angry and resentful, we should instead contemplate on impermanence,” Phra Paiboon advised. “We should be mindful that every greatness is subject to decay. We ourselves are under the same law. So we should be aware of the urgency of now, and persevere all the more in our practice.”

The holy place that evoked the strongest emotion in me during the pilgrimage was the Mahawan forest monastery in Vesali.

It was here that the Buddha finally agreed to ordain women and announced that men and women are equal in their ability to attain spiritual liberation.

As I prostrated on the ground to pay homage to the Buddha before the stupa, my face was wet with tears. I learned later that I was not alone.

It was also in Vesali that the Buddha announced when he would pass on, using his old age and sickness to illustrate the truth of impermanence. He comforted his grieving disciples:

“All mankind, who is young, elderly, foolish, wise, poor and rich, is liable to decay.”

Listening to the sutta which described in detail how the Buddha, then an old man at 80, struggled with sickness and was determined to use his death to teach the law of suffering, impermanence and non-dependence, I felt deeply moved by his compassion.

Meditating in the morning fog at the site where the Buddha passed away in Kushinagar in the state of Uttar Pradesh was another powerful moment for me.

The selected sutta for meditation there was on the Buddha’s advice for how to resolve conflicts when different views on his teachings arose after he was gone. 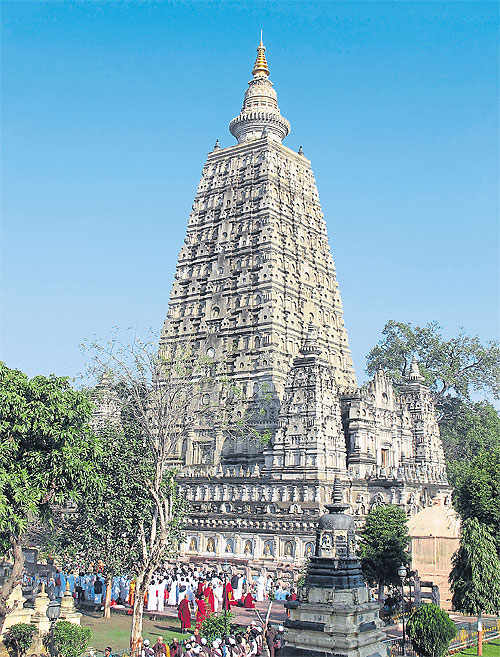 Stop the quarrel first, he advised, then find common ground to talk, leave out the differences, select the person most willing to talk and negotiate, and avoid the “verbal dagger”. A neutral mind free of anger is most important in a mediator, he stressed.

At Sarnath, where the Buddha delivered his first sermon, we sat on the green lawn before the towering Dhamek Stupa to be transported back in time once again. As I contemplated on the Buddha’s first sermon on the truth of suffering, its causes, its cessation and the way to end suffering, I felt a pool of stillness inside myself. Then ripples of thoughts arose and passed away. Again and again. Watching them, I learned to gradually accept the impermanence of my own mind and body. It also reaffirmed how far I am from my spiritual goal as a Buddhist, and how important it is to keep persevering despite my spiritual stumbles and falls.

I began the trip full of worries for my country. Ten days later, I realised those strong emotions do not serve any purpose. It is more constructive to train ourselves to accept impermanence and work toward change with equanimity. And keep persevering.

That was what I brought back home with me — a different calm from the pilgrimage with a difference. n