Harmony in the hills
Travel

Harmony in the hills

This delightful little hamlet is a model of self-sufficiency and simple pleasures; sample the tranquillity now before the madding crowd arrives

Tucked into a hollow in a range of mountains northeast of Chiang Mai town, the people of Ban Mae Kampong have been living a simple but contented life in the embrace of nature for more than a hundred years.

Mae Kampong, seen from the main road above.

Well before the first light of dawn, a cacophony of cockerels alerts the hamlet to the imminent arrival of a new day. When I emerge from the little wooden house in which I've spent the night, smoke from wood-fuelled kitchen stoves is already rising towards rain clouds which seem to poise motionless above the peaks of adjacent mountains. The room I slept in is right next to a small stream and I could hear the sound of flowing water every time I woke during the night.

My homestay hostess, Malee Chaithon, shows up at that point bearing some freshly brewed coffee. "I ground the beans myself," she assures me with a smile.

Mae Kampong is a small village situated around 1,300m above sea level in Chiang Mai's Mae On district. The temperate climate, high elevation and lush forest cover make this a perfect place to grow Assam tea, whose leaves were originally prized not for making the pick-me-up beverage but as the main ingredient in a fermented snack food called miang which has long been popular in northern Thailand as well as adjacent highland areas in Myanmar and Indochina. In fact it was the high demand for miang which first attracted farmers to settle here around 150 years ago. And miang remains a significant product to this day, continuing to nourish the villagers and pad out their wallets.

z The residents of Mae Kampong boast that their village was the first in Thailand to offer reasonably priced bed-and-board for tourists willing to stay with local families, a style of no-frills accommodation now called homestay. Of the 139 households here, 25 participate in the village-run homestay service.

Since Assam tea bushes prefer high humidity and temperate weather, the natural forest around the village is carefully protected. Coffee, which loves similar jungle-like conditions, is now grown, too, providing extra income for the villagers. The high annual rainfall also allows the householders to grow flowers with little or no effort on their part; I spotted the colourful blooms of garlic vine (Mansoa alliacea), begonias and garden balsam everywhere, even creeping across rooftops.

With limited level land available, the houses are built so close to each other that their roofs almost touch. Squeezed into this small site are a total of 139 households.

"It's been raining for five consecutive days. Today is the first day I've been able to go outside," said Malee's husband, Nikom, as he pulls on a pair of rubber boots. He picks up a basket made from woven strands of bamboo and together we walk towards the forest at the edge of the village.

"That stream never runs dry," he says pointing to the brook that runs past his house.

Nikom makes a living from cultivating tea bushes in the traditional way. Without adding fertiliser, pesticide or other chemicals, he can make a steady income from his small plantation. This is one situation where money could be said to grow on trees. He told me that some of his neighbours can gather as many as 80 bundles, each weighing around 300g, of tea leaves per day. These leaves, after being steamed and then left to ferment for two months, are transformed into the dark-coloured delicacy called miang for which the locals charge 10 baht per bundle.

"My grandparents moved here too late," Nikom tells me. "By the time they got here all the land near the village had been occupied. They did manage to get a piece of land for themselves eventually, but it's about 4km from here and you can only get there on foot."

Nikom decides not to trek that far today. Instead he takes me up the gently sloping hill at the back of his house where he has some tea bushes and a small vegetable garden. He picks a few handfuls of tender tea leaves, skilfully separating the leaves from the branches with a razor blade attached to one of his fingers. These go into his basket along with some tomatoes and chillies. Miang salad is on the menu for lunch, he tells me with a grin. 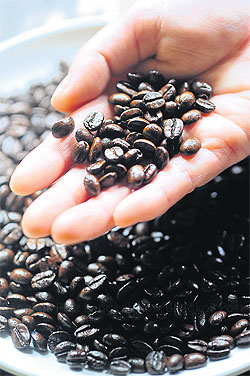 Mae Kampong residents cultivate Arabica coffee bushes which thrive under the shade of big trees in the surrounding rainforest. The village headman has improved the techniques used for roasting the coffee beans and he has also taken on the task of marketing the finished product.

Although it is not served by public transport and does not boast urban conveniences like a clinic or even a small supermarket, Nikom said he has never thought of Mae Kampong as being a poor community. He pointed out that the surrounding forest and the villagers' tea plantations are good sources of both food and income and that he and his neighbours have all the basic necessities for life here: fresh air, a clean environment, running water and electricity.

For more than three decades now, the villagers have been generating their own supply of electricity, thanks to two generators supplied by the Ministry of Energy and the fast-flowing streams which run down the steep mountains in this locality. They have potable running water, too, because the villagers have installed their own tap-water system; it is fed by streams which never dry up thanks to the pristine local watershed. Nikom's water bill comes to the princely sum of 120 baht per year. And that's a flat rate; the supply is unlimited.

"The electricity costs us 2 baht per unit. It makes our life a bit easier now that we have electrical appliances. But as more of the villagers buy things like flat-screen TVs, DVD players and bigger fridges, we have started to have blackouts in the evenings, sometimes."

Wonderfully bucolic and peaceful and not as remote as it first seems when you look at a  map — it's only a one-hour drive from Chiang Mai city — Mae Kampong is slowly becoming a weekend retreat for city dwellers. I spotted a handful of cottages which looked like holiday homes as well as a small resort built on a beautiful site next to a stream. Several coffee shops and small bars have popped up on the main road as well as at a popular viewpoint in the area.

As I was roaming around, several locals approached me to tell me about houses for sale in the vicinity. So it is clear that outsiders, and the villagers themselves, are increasingly aware of Mae Kampong's untapped potential as a getaway destination. I also heard that several of the villagers are eager to sell plots of land. Fortunately, the village already has some regulations in place to control the nature of business development. It is forbidden to use heavy machinery, like tractors or bulldozers, or to fell trees in this locality. So one can only hope that whatever commercial development does occur here will have a minimum effect on the environment and the ambience.

"There is neither nightlife spots nor a big market here," Nikom tells me. "Life has been very peaceful here for as long as I can remember. But this is a very small village so I'm afraid that too many outsiders could ruin everything."

I was glad to hear that, to know that Nikom is aware of the dangers that change can bring. I just hope that he and his neighbours are strong enough to withstand the commercial pressures and are able to safeguard their heritage and identity. Otherwise, this delightfully tranquil place could so easily lose its charm and become just another overdeveloped stop on the tourist trail. 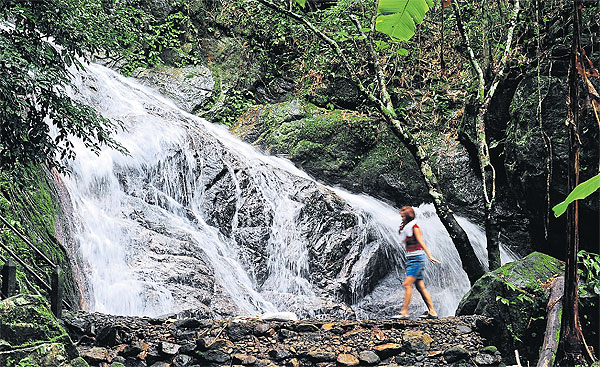 The streams in Mae Kampong never run dry. Nearby is a waterfall which local people and tourists can enjoy all year round. The well-preserved forest in these parts maintains a natural watershed, allowing the villagers to lay pipes for their own tap-water system. 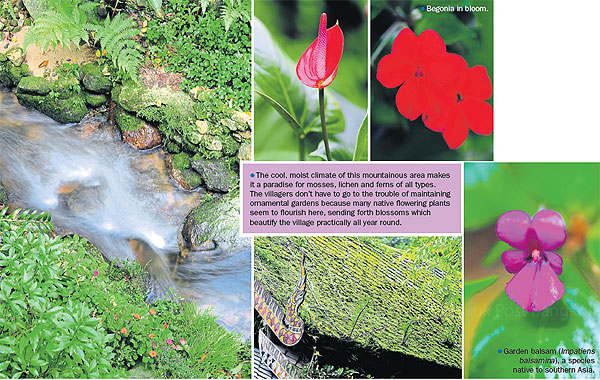 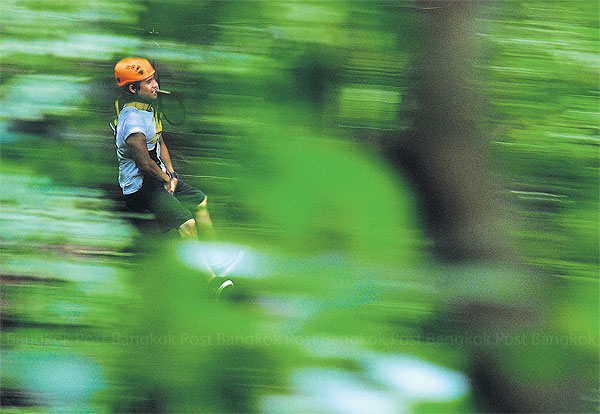 A commercial venture called Flight of the Gibbon has helped realise more of the potential of the local rainforest, paying a rent to the village to run what was the first zipline canopy tour to be launched in Thailand. Adventurers pay for the thrill of zooming high above the forest on a line suspended from the tops of tall trees. Today, the business is another important source of income for the people of Mae Kampong. 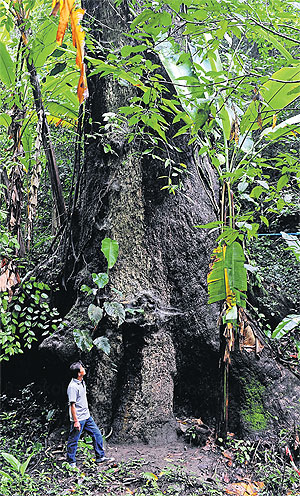 Nikom Chaithon gazes up at the canopy of a massive tree in the lush forest which surrounds his village. Toom is the name for this species of tree in the local dialect and its trunk can grow to more than 3m in diameter. 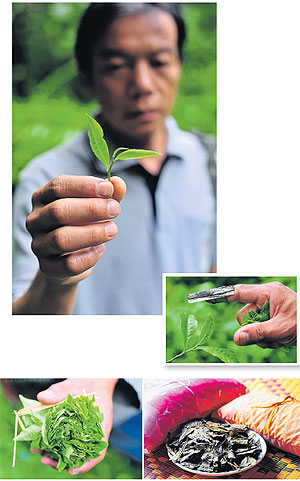 Nikom Chaithon holds up young leaves from a tea bush. Assam tea has been the villagers’ main source of income for over a century. Only the tender, immature leaves are used for making tea (note how Nikom has attached a blade to his index finger to make harvesting easier). Small bundles of these pale-green leaves are secured with twine made from bamboo fibre, then steamed, fermented and dried to make commercial tea. Medium-sized leaves are fermented in pure water for two months and then dried to make a traditional chewy snack, very popular in the North, called miang. The large mature leaves are dried and used as stuffing for pillows or cushions (below the two cushions in the photo is a plate of miang). 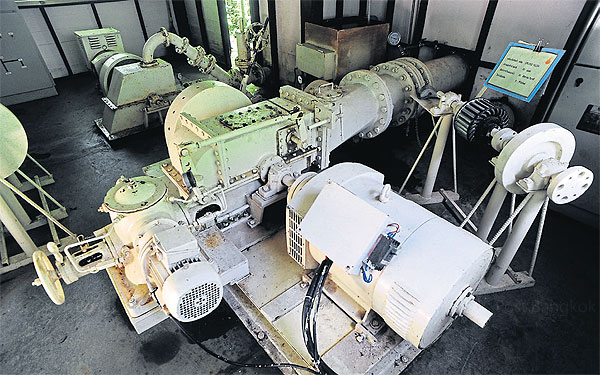 The pristine state of the watershed forest in these parts enables the people of Mae Kampong to generate their own electricity from hydropower. Generators powered by headwaters falling from heights of 55m and 30m can produce electricity to a maximum capacity of 12kW and 5kW, respectively. The project was launched in 1982 with the generators funded by the Ministry of Energy and the labour to erect the power station supplied by the villagers. Originally built entirely from wood, the power station is today housed in a concrete structure. 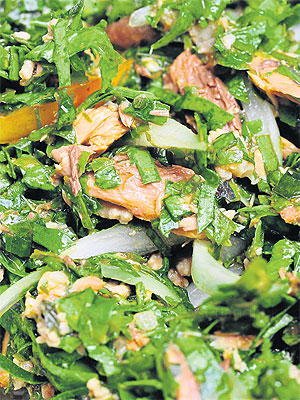 Miang salad is a treat you should definitely try if you visit these parts. Freshly chopped young tea leaves, which have been slightly bruised, are mixed with sliced raw onions, tomatoes, chillies, lime juice and morsels of cooked meat (usually pork) or fish. The freshly plucked leaves have a unique fragrance which is why it is only possible to make this dish close to where tea bushes are being cultivated. 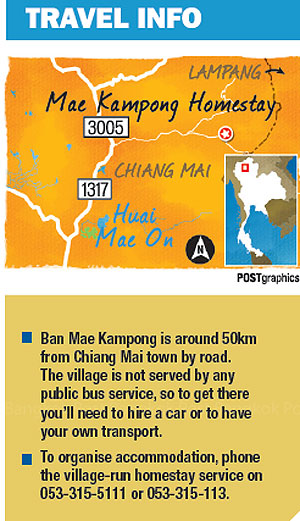